A Young Designer with Traditional Sensibilities and Timeless Style 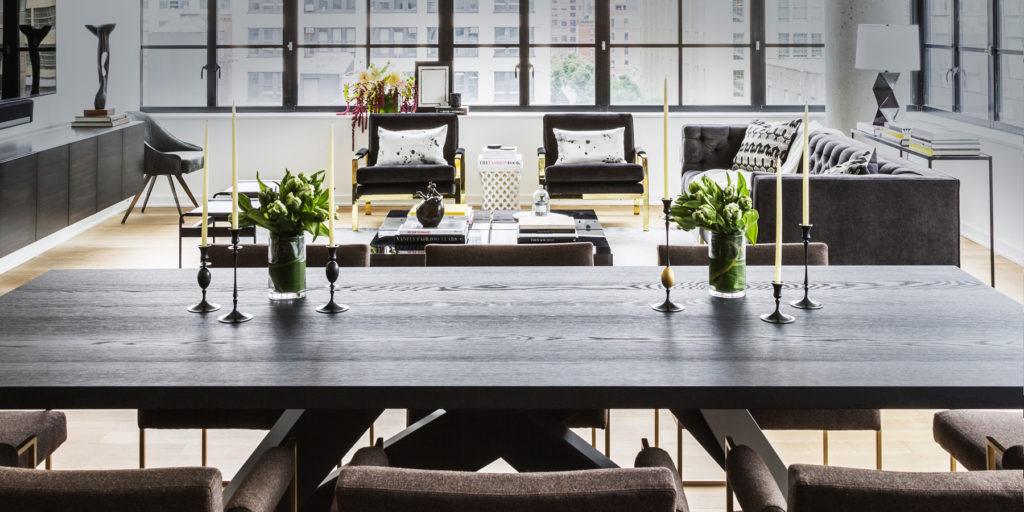 Bennett Leifer applies lessons learned from a series of A-list mentors to residences that are luxurious, sophisticated and, occasionally, whimsical. 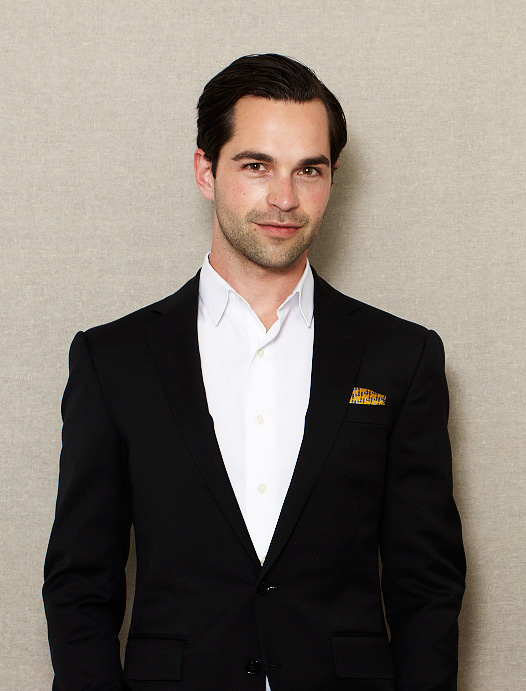 June 13, 2016New York–based designer Bennett Leifer studied under some of the best — Robert A.M. Stern, Juan Pablo Molyneux — and matriculated from the star-making design department of Ralph Lauren before setting out to put his own stamp on the world of interiors. Top: A strictly neutral, loft-like apartment overlooking the city’s High Line park. All photos by Marco Ricca

Bennett Leifer looks so fresh-faced and boyish that it’s hard to believe he’s been in the design business for 13 years. Before setting up his own studio three years ago, he spent a full decade soaking up as much knowledge about his craft as he could at multiple top interior design firms. Rarely do you meet someone so young who is so clear-eyed about what he wants — and needs to learn — and goes out and gets it. But then, as Leifer himself points out, he’s always been directed.

As a child growing up in Great Neck, on Long Island, and in Manhattan, Leifer was most captivated by the architecture of the fabulous Great Gatsby–era mansions along the North Shore and the many masterworks of the Metropolitan Museum of Art. When he was an undergraduate at Skidmore College, he majored in both art history and business because he knew he wanted to work in a creative industry. Interior design seemed an ideal option.

The preparation paid off. Soon after graduating, he scored a job as assistant to the creative director at Kondylis Design, the bustling interiors branch of Costas Kondylis and Partners (the architecture firm famous for designing high-rises for developers like Donald Trump). Run by Kondylis’s daughter, Alexia, the studio was freewheeling enough to give Leifer, despite his lack of professional training, smaller residential projects to handle, culminating in a showhouse room toward the end of his two-and-a-half year stint. By then, Leifer was certain he’d found his métier. “I loved interacting with the clients and managing the projects,” he recounts. “It was a very creative, exciting place to work.”

Keen to take on larger decorating projects, Leifer moved to a job at a small, high-end studio specializing in the Art Deco aesthetic, where he would be the only design associate. A year or so later, having honed his decorating skills, he secured a position at Ralph Lauren in store development, a department that has long served as a kind of interior design finishing school for a host of top practitioners. 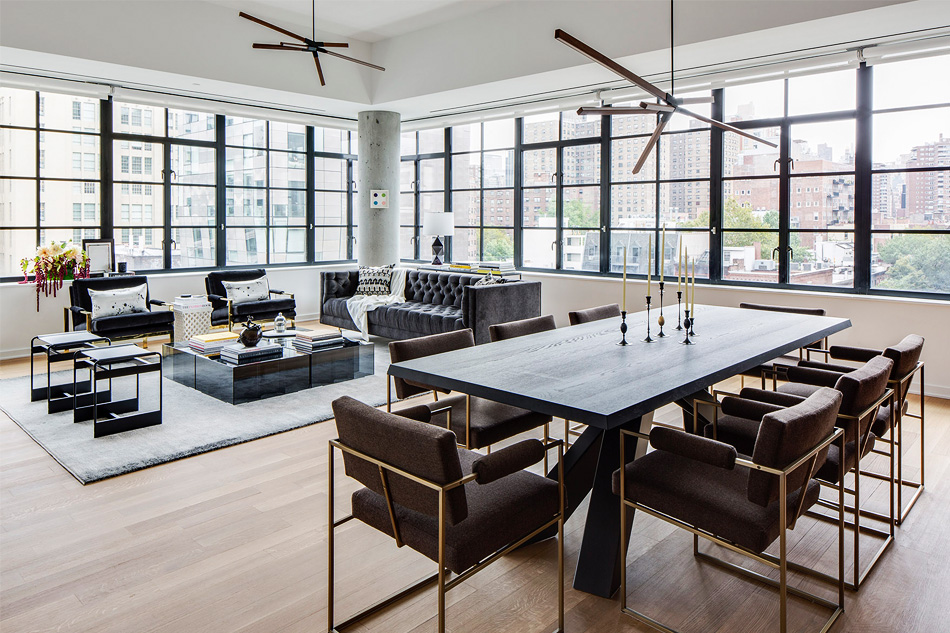 The owner of an apartment overlooking the High Line park in Manhattan’s Chelsea neighborhood asked Leifer to create a sophisticated retreat that steered clear of color. Accordingly, the designer chose to put an “emphasis on strong silhouettes in black and white to relate to the city views.” The sculptures on the coffee table are from Maison Gerard, and the Milo Baughman armchairs were found on 1stdibs. 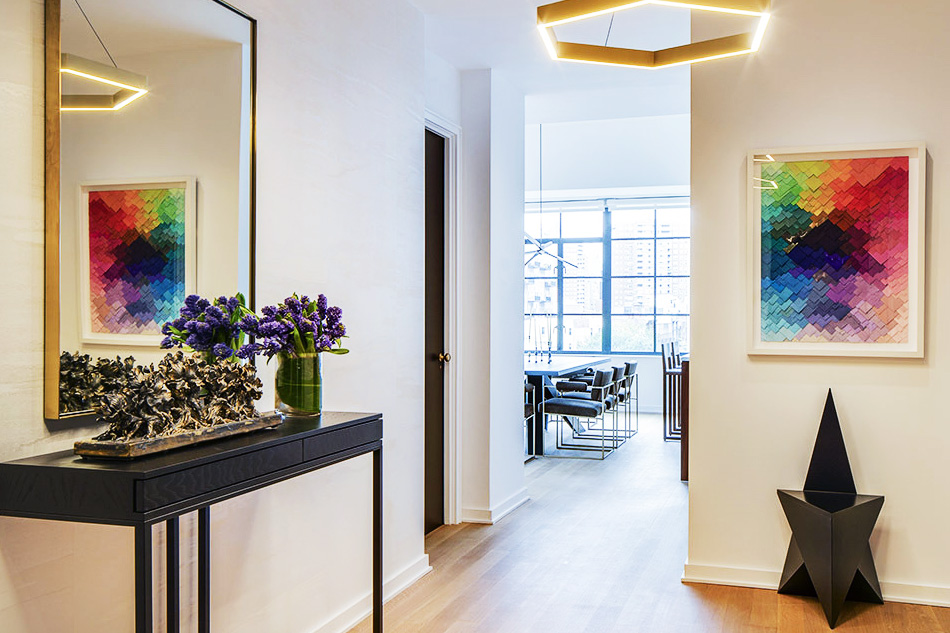 In the entry of the same residence, a Material Lust Vanishing Twin side chair sits below a Maude Vantours work from ArtStar. 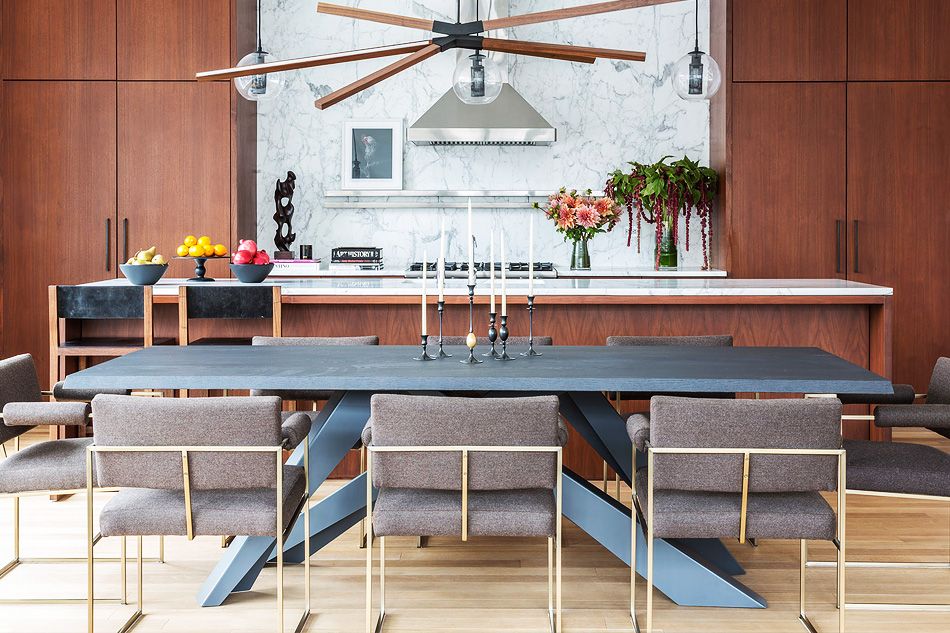 In the open kitchen and dining area, the angular form of the table base is repeated in the wood and metal pendant light above. The candlesticks are by Ted Meuhling. 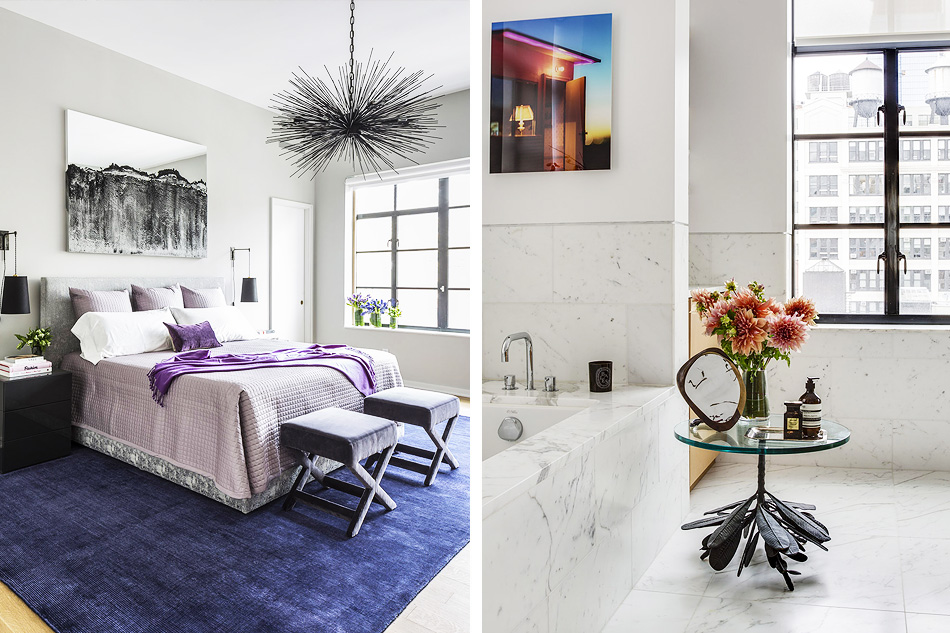 The only colorful space is the home’s master suite, which features a pair of velvet-upholstered, x-base benches from Barbarella in the bedroom (left) and Odegard‘s botanical side table in the bath (right). 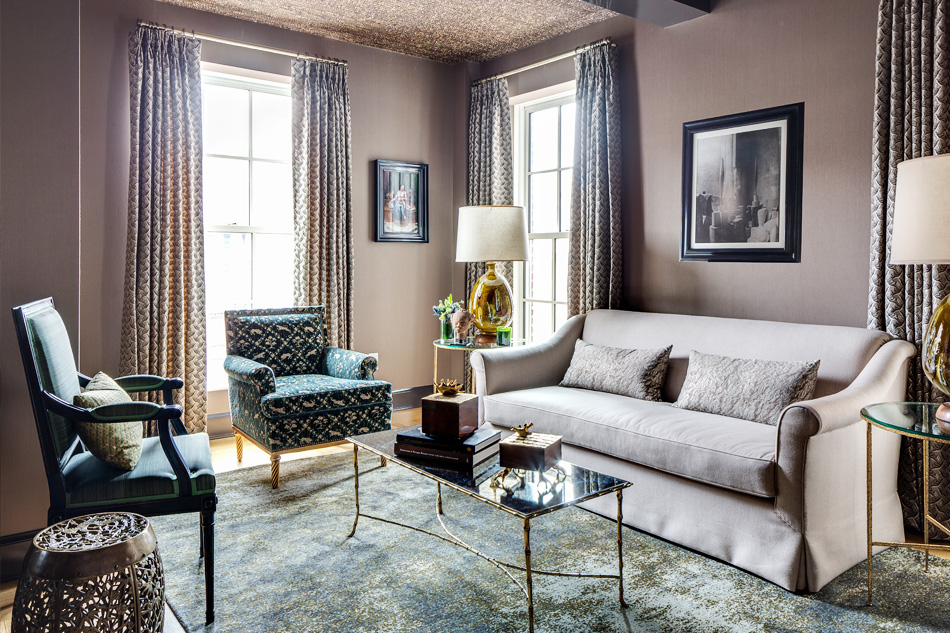 For a client Leifer describes as a “a very interesting, creative woman” and a world traveler, the designer combined lush finishes — hand-applied feather panels from Schumacher on the ceiling, an archival Italian silk-velvet on a Maison Janson club chair — in an intimate seating area, dubbed “the fumoir.” 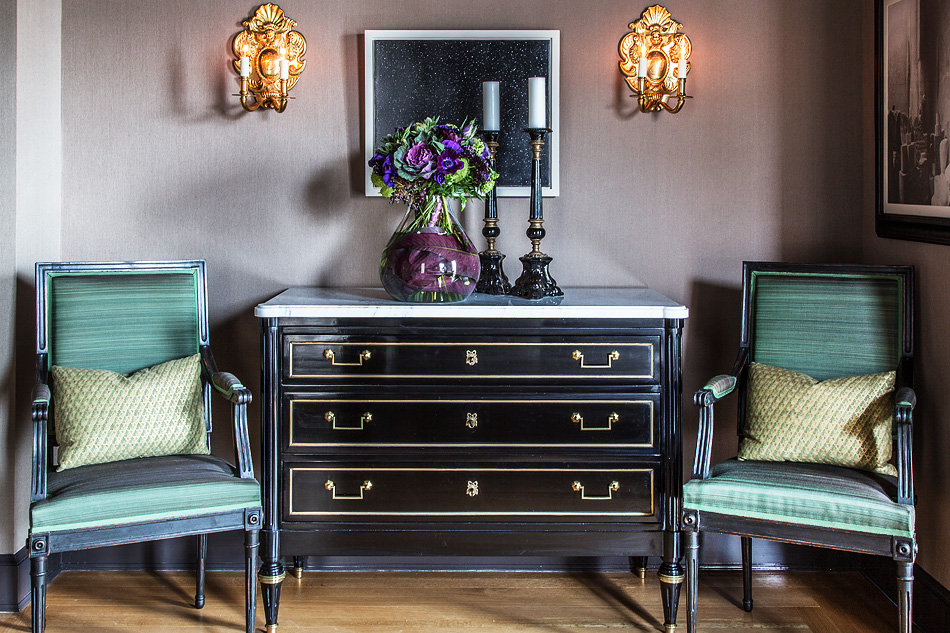 Ebony accents lend a sense of drama to the room’s traditional furnishings, which include a pair of French sconces and Louis XVI–style armchairs upholstered in green horse hair. The artwork is by Vija Celmins. 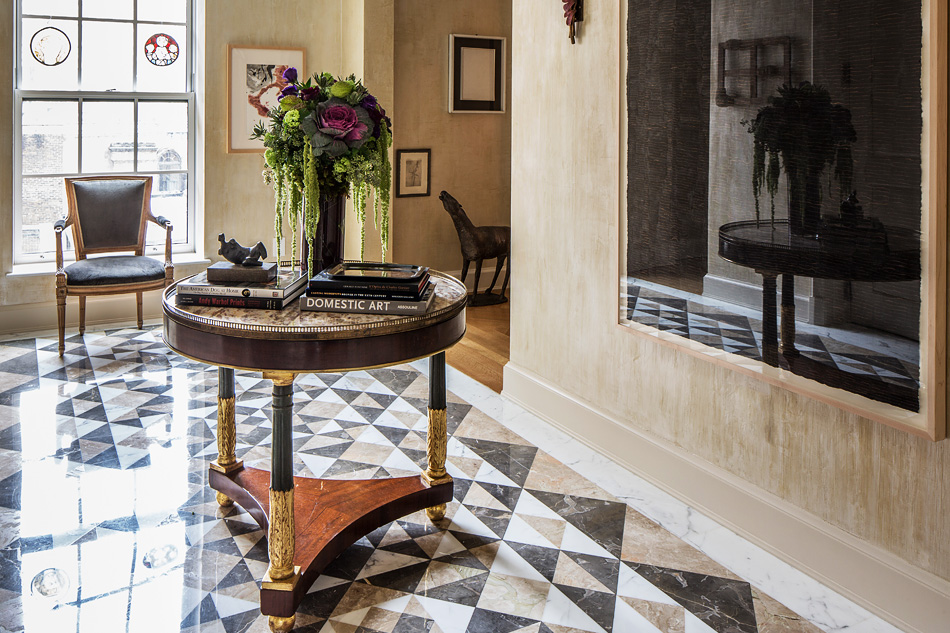 In the foyer of the same residence, a giltwood gueridon from Lerebours complements the warm tones of the custom triangle-pattern stone floor and strié stucco walls. 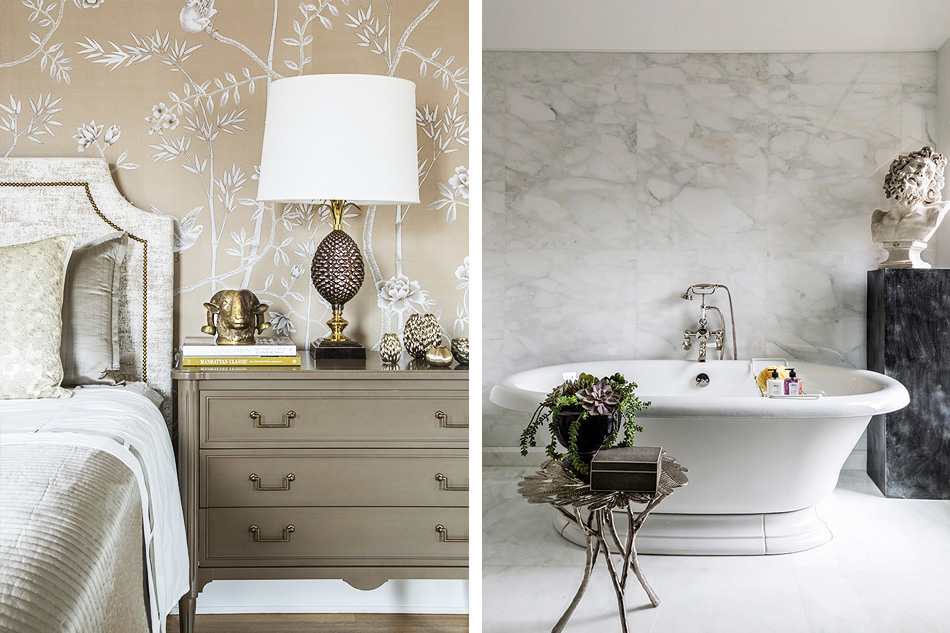 A custom Louis XVI–style bed, lacquered side tables and Maison Charles table lamp add a touch of glamour to the master bedroom. In the bath, Leifer paired a freestanding tub with a neoclassical bust found on 1stdibs. 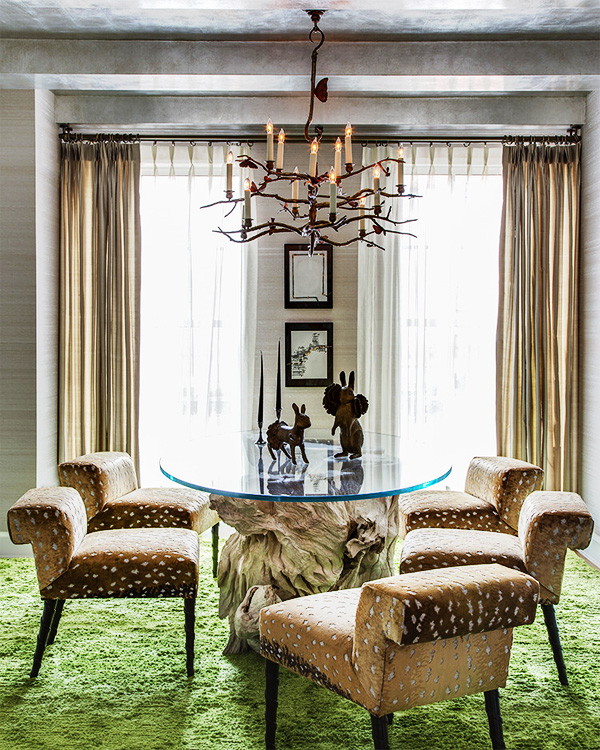 For a fairy-tale forest-like dining space, Leifer chose a tree-stump table from Andrianna Shamaris and a Claude Lalanne twig chandelier.

Leifer marvels at the training. “Everyone talks about the aesthetics,” he says of Ralph Lauren. “But what I really learned were rules and measurements. How things work. How people interact in a space. It taught me a lot about layouts, flow and build out. It was wonderful.”

Once well schooled in practicalities, Leifer found employment with the legendary master of cosmopolitan high-luxe Juan Pablo Molyneux, whom he calls a major influence. “He is such a perfectionist, and he does things on a grand scale. I saw how much behind-the-scenes work goes into achieving that,” says Leifer, still sounding a bit in awe. It was from this elder statesman that he received an education in custom finishes and furnishings. From there, he went to work for another high-end designer known for English traditionalist decor before finishing his extended apprenticeship at the fabled design studio of Robert A.M. Stern Architects.

“I’d come full circle. I was again working with developers and with architecture woven directly into the project,” he says. “And I realized how much I enjoyed that strong architectural envelope, not to mention how much I liked developers!”

Leifer had good reason to like them. A group he met through RAMSA later commissioned him to decorate two identical apartments for two different types of prospective buyers in a Gramercy Park high-rise. The project ultimately enabled him to go off on his own. Thanks to his diverse decorating experiences, Leifer by now knew better than most that “there are so many ways to design a room.” He outfitted one of the model apartments for a fictive young family and so made it fresh and a little playful, with fancifully shaped lighting fixtures, intriguing ceramics and lots of subtle patterns, mostly in grays, browns and purples, all the while not straying too far from a traditional feel. “If someone is on a budget, you need to be strategic about where you put the most important piece and maybe simplify the furnishings and materials,” he says. 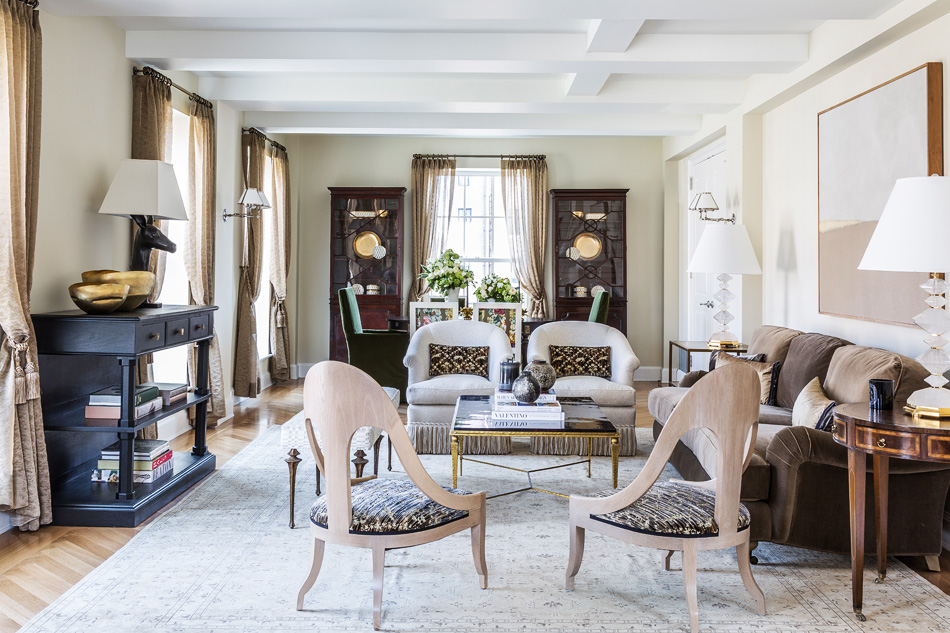 Leifer decorated two model units in a Gramercy Park high-rise: a third-floor apartment decorated with a young family in mind and a 10th-floor residence, seen here, meant to catch the eye of well-heeled empty nesters. The console on the left wall is from James Sansum. and the rock crystal table lamps are from Phoenix Gallery. 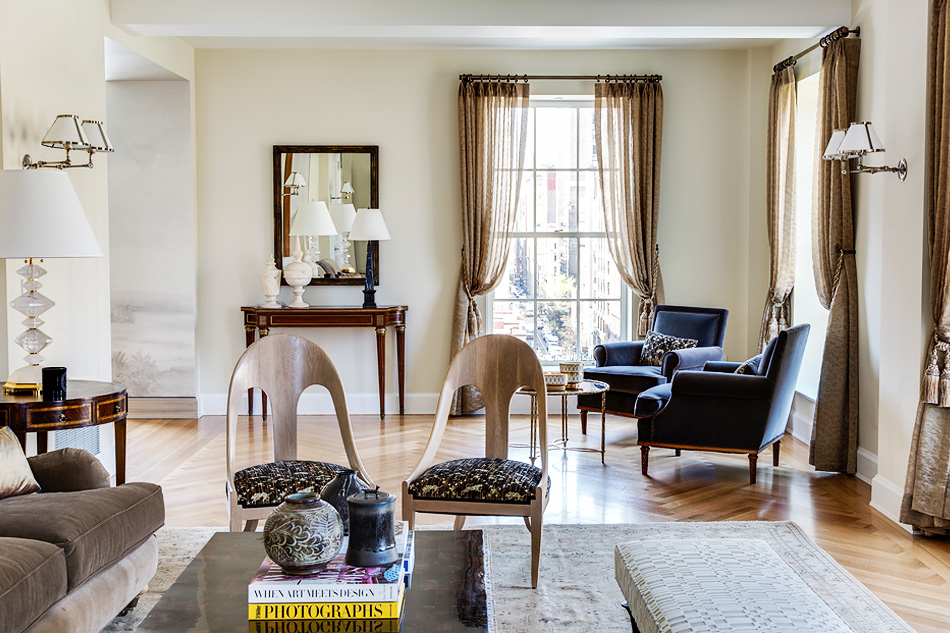 The space is divided into reception, sitting and dining areas, furnished with visually light and legged pieces — including a pair of spoon-back seats and Maison Janson club chairs that Leifer calls “a personal favorite” — that maintain an open, airy feeling. 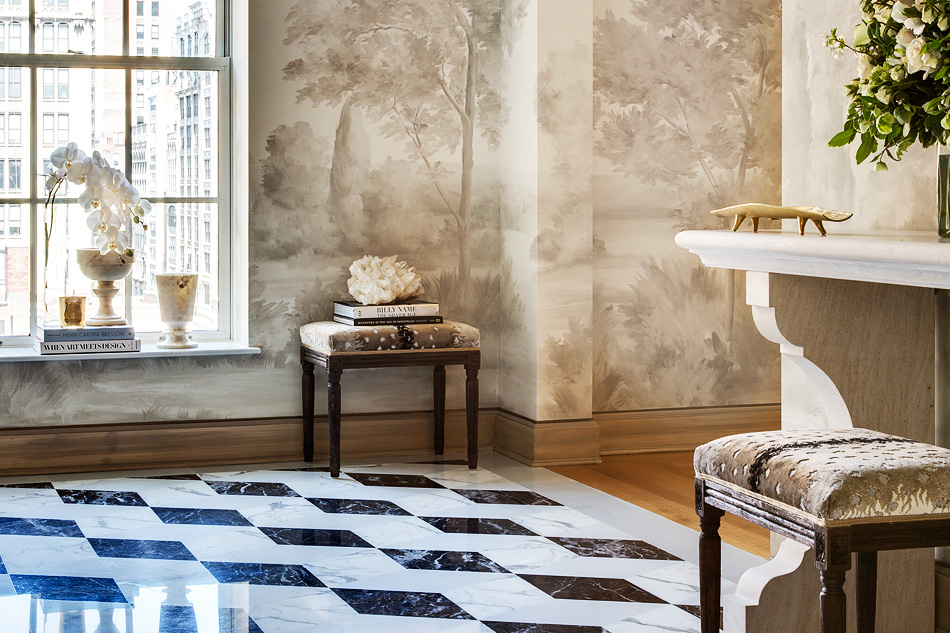 In the entry, scenic wallpaper and marble floor tiles laid in a checkerboard pattern nod to the style hallmarks of many high-end and historic Manhattan homes. 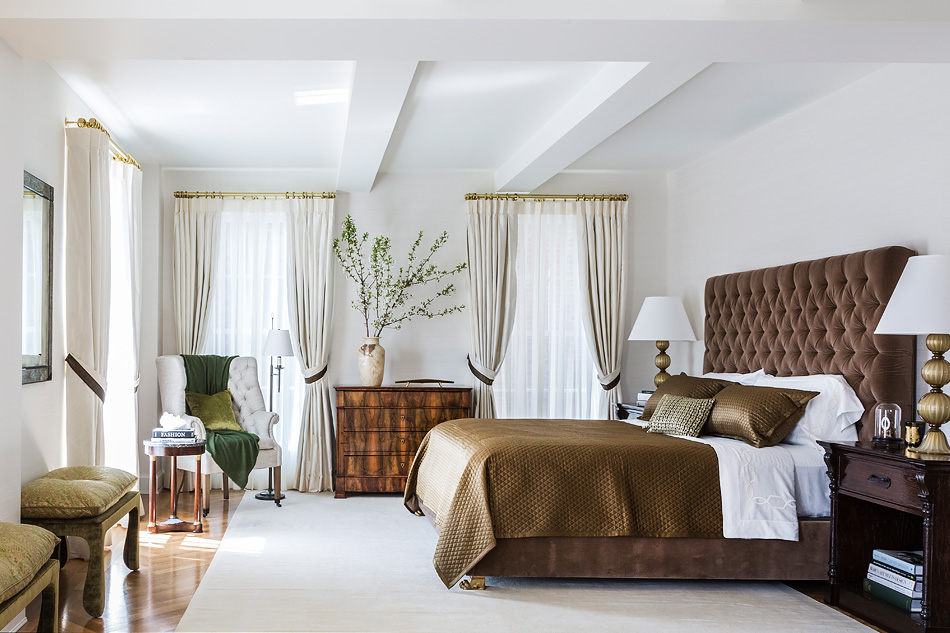 A crisp yet earthy palette takes hold in the master suite, where furnishings in varied wood tones and rich greens recall the colors of Gramercy Park below. The lion’s paw bed and the dresser are both from Antiques on Old Plank Road.

Leifer made the other model apartment, for an imaginary pair of well-heeled empty nesters, grander and plusher, with fine wood pieces and overstuffed upholstery in a muted palette of taupes, blues and greens. Still, Leifer notes it takes only a couple of elements to create ambience. In this instance, the foyers of the apartments are distinguished by differently patterned black-and-white marble floors and scenic wallpapers, each of which he feels establishes a distinct tone.

An interior should be a third me, a third the client and a third what’s right for the space. 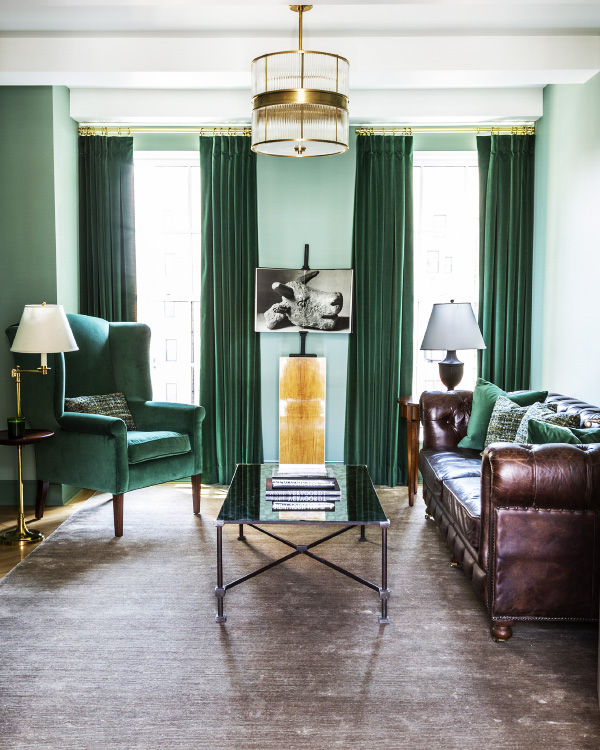 In the Gramercy Park model residence, a traditional wingback chair and chesterfield sofa occupy the library, which is dressed in shades of green. A vintage book, displayed as art on a pedestal, is the room’s centerpiece.

Through the project, Leifer acquired what he calls “a very interesting, creative woman” as a client, who when discussing the design of her new apartment, told him she wanted “a dining room that felt as if it were a place for a picnic.” Tickled by the notion, Leifer envisioned something even more surreal — deer grazing around a tree stump — and then realized a sumptuous version with a glamorous glass-topped tree-stump dining table from Andrianna Shamaris, delicate low-backed stools with a spotted antelope pattern, a long-pile silk carpet the color of summer grass and a Claude Lalanne twig chandelier to illumine it all. At first glance, the rest of the apartment looks rather traditional, but on closer viewing, fantastical flora and fauna abound, most dramatically in a bathroom, where the walls are paneled in peacock feathers, and in the master bedroom, where a Lalanne bronze crocodile bench lurks at the foot of the bed.

Keen on making his clients comfortable in their new environments, Leifer believes that designers should avoid imposing too much of their own taste while still acting as style guides. Ideally, “an interior should be a third me, a third the client and a third what’s right for the space,” he says.

That is why he can go from designing a luxuriously whimsical interior for one client to a subdued contemporary space for another in a loft-like new building overlooking the High Line. He laughs when recalling how the project had several unusual issues to resolve, as the client was not only averse to color but also disliked round lighting fixtures. One might call these issues “challenges,” but Leifer doesn’t like the term, insisting instead that “every apartment is a puzzle.” Figuring out the pieces that best suit the client and space is fun. Which is how he got away with hanging globe pendant fixtures in the kitchen: Their seemingly straight-lined interior canisters apparently made up for their offensive though transparent curves. With a little coaxing, Leifer got the client to deem purple a neutral tone, so rather than creating a stark residence of black and white, he softened the spaces with warm plum and gray fabrics and accessories, along with dark woods. Since the apartment is situated in the heart of the Chelsea gallery district, Leifer decided to give a nod to the contemporary art world’s most enduring star by covering the walls of the powder room in a pixilated purple flower paper subtly evoking Andy Warhol’s famous “Flowers” paintings. It’s a detail the client would have never come up with on his own but now savors. For Leifer that’s the satisfaction of the job. “I want it to be perfect,” he says earnestly. “I want to make it right.” 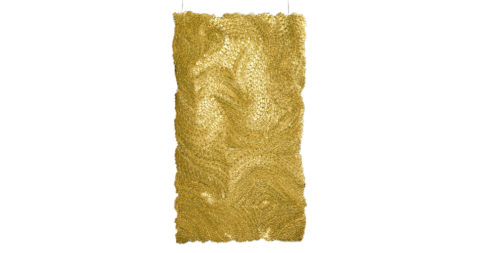 “I love Olga’s work; it is so unique and tactile, which is rare for an art piece of this stature.” 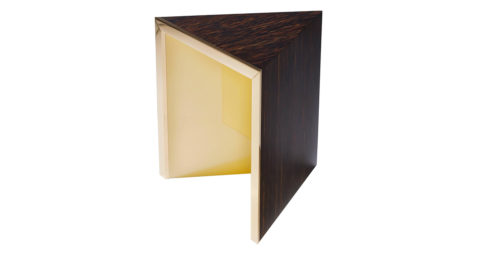 “Dynamic in shape and material, this piece’s genius lies in its balance between simplicity and richness.” 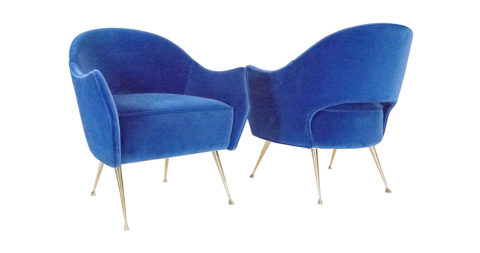 “I love the shape, scale and comfort of these chairs, as well as the jewel tones Bourgeois Boheme makes them in.” 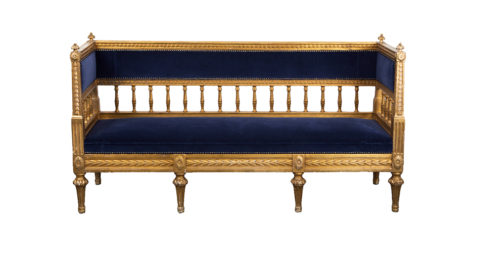 “Liza Laserow offers such incredible pieces that are statements on their own and can be worked into any interior. This is a work of art in its detailing but has soul and invites you to actually sit on it.” 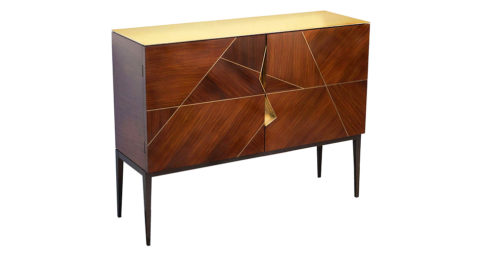 “This cabinet is so sophisticated in its design. It has a simple silhouette yet a chaotic rhythm in its inlay lines and wood grain direction.”