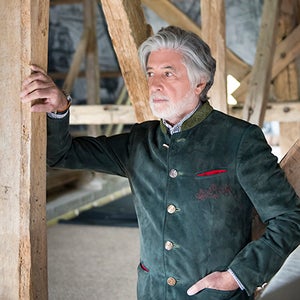 Juan Pablo Molyneux heads the international design firm J.P. Molyneux Studio. His first studios, opened in the 1970s in Chile and Argentina, were gradually supplanted as the designer’s journey took him to newer and broader horizons. The two studios he now maintains, one in New York (established 1982) and the other in Paris (established 1998), may be, separated by time and geography, but they are united by technology and by the spirit of collaboration cultivated between the teams, allowing for a unique ability to serve clients globally.

As New York, Paris has always been one of the designer’s favorite cities. After studying architecture at the Universidad Católica of Santiago, Chile, Molyneux attended the École des Beaux Arts and the École du Louvre, acquiring his knowledge of historical styles.

Molyneux’s many prestigious projects include the design of the Pavilion of Treaties at the Konstantinovsky Palace, Saint Petersburg; the Salon Russe at the Palais des Nations, Geneva, both for the Russian Federation; the salons of the Cercle de l’Union Interalliée in Paris, and the renovation of the Hôtel Claude Passart, and the Chateau de Pouy sur Vannes. His acclaimed residential projects are found worldwide, from Santiago, Chile, to Buenos Aires and Lyford Cay to Cap Ferrat, New York, Moscow, Beverly Hills, London, Paris, Quebec, Palm Beach, Geneva, and Doha.

His work has been published extensively in eminent design magazines and other publications throughout the world, such as The Wall Street Journal, The Financial Times, The New York Times T Magazine, Architectural Digest, Whitewall, Tatler, Elle Décor, House and Garden, Harper’s Bazaar, Interior Design, Les Plus Beaux Interieurs, Milieu, and Casa Vogue, and has been featured in numerous books on interiors, including a 1997 monograph on this work. He has lectured throughout the world at museums and cultural institutions.

Molyneux’s work is bold, eclectic, witty, embracing and interpreting the past and envisioning the present with a confidence built on nearly four decades of experience.