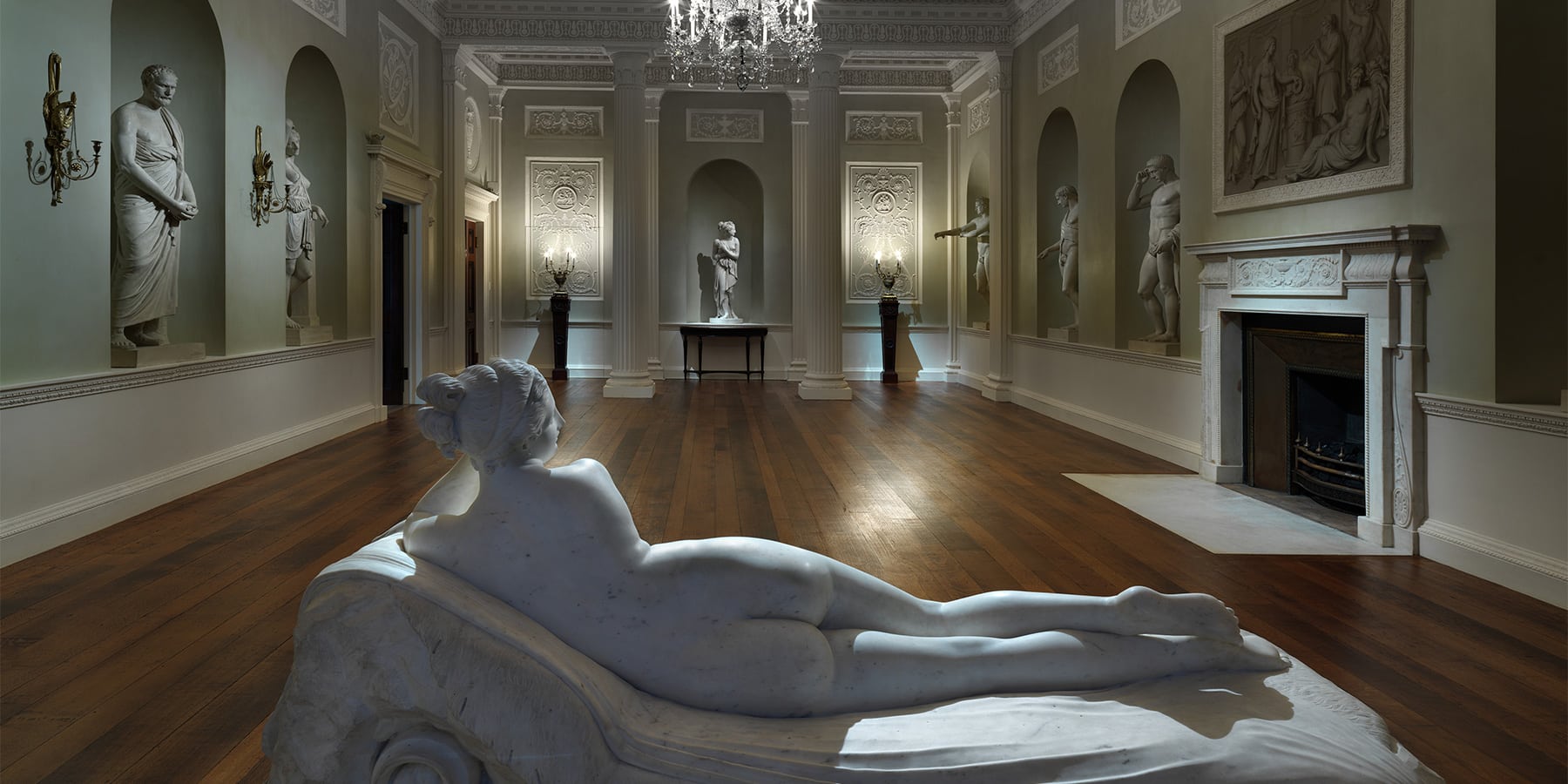 New York's Metropolitan Museum of Art teamed up with interior design firm Roman and Williams on a dramatic new display of 700 works from the 16th through 19th centuries. 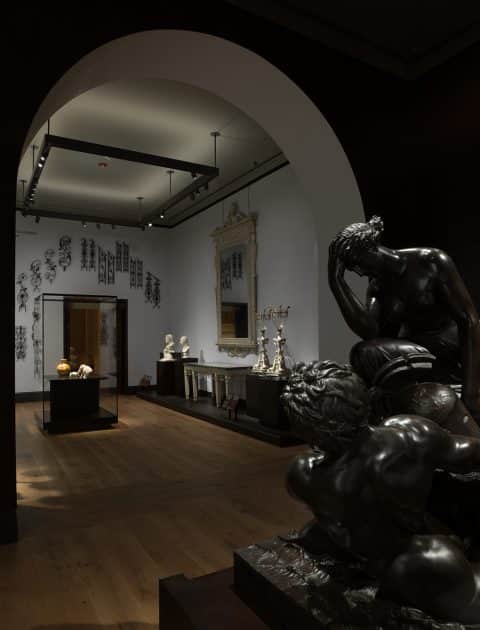 The Metropolitan Museum of Art worked with Robin Standefer and Stephen Alesch, founders of the design firm Roman and Williams, on the reimagining of its British galleries, unveiled earlier this month. In the foreground above is Thetis Transporting Arms for Achilles, 1804–12, by William Theed the Elder (photo by Richard Lee). Top: This Reclining Naiad was made in the early 19th century by an assistant in Canova’s workshop for the country house of Britain’s Lord Darnley. All photos by Joseph Coscia unless otherwise noted

The stereotype of British culture is something veddy, veddy dry indeed — repressed emotions against a gray landscape. That’s part of the reason people will be most pleasantly surprised by the new British galleries for decorative arts and design at New York’s Metropolitan Museum of Art, which opened March 2. After seeing the colorful, often humorous and always ingeniously crafted items on display, visitors won’t again let the British proclivity for understatement obscure 400 years of vibrant design achievements.

Set against richly colored walls, the nearly 700 objects on view, from the years 1500 to 1900, are spread across some 11,000 square feet, and their completely overhauled display is now downright dramatic. Don’t worry, though, it all still feels veddy veddy British: Around 100 of the 700 objects are teapots.

Robin Standefer and Stephen Alesch, of the acclaimed design firm Roman and Williams, collaborated with The Met to create the new 10-gallery installation, and they have brought to the spaces the intense color and emotive storytelling their interiors are known for. The gallery exhibits — including, most notably, spiffed-up period rooms; a massive, ornately carved staircase that can be ascended for the first time in centuries; and a wealth of tabletop vessels demonstrating the power of good design, both gilded and humble — now shine with a renewed purpose.

As part of the reinstalled display, a grand staircase from the Tudor manor Cassiobury House, built in the 17th-century northwest of London, can now be ascended by museumgoers. Its carvings, thought to be by English craftsman Edward Pearce, feature acanthus scrolls, seed pods, oak leaves and pinecone finials.

Wolf Burchard, the associate Met curator who brought the galleries to fruition — and has been on the job only for a little more than a year — makes for a very qualified tour guide. His previous gigs, in England, were with the Royal Collection Trust at Windsor Castle and the National Trust.

Despite that stately home experience, Burchard has fully embraced the idea of “showing these pieces as art objects” rather than as inert historical remnants, he says as he strolls through the galleries just before their opening. Previously, they were arranged in vignettes, as if they were furnishing a country house, and something of their unique power was lost. 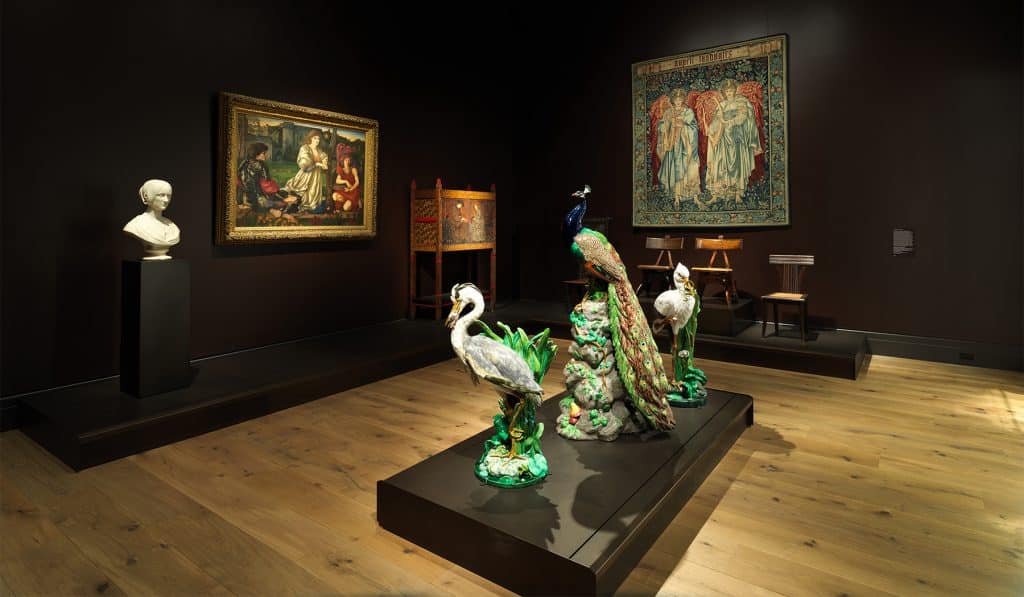 Minton‘s majolica birds from the last few decades of the 19th century perch in the center of a gallery whose walls display Sir Edward Burne-Jones’s 1868–77 Love Song (left) and an 1898 tapestry by Burne-Jones and John Henry Dearle.

Standefer and Alesch decided to move the entrance to the galleries, although access is still through the great medieval hall on the Met’s ground floor. “We were arch hunters,” Standefer says of the duo’s quest as they searched for a better, more prominent entry point than the previous rather hidden one. They found an ideal one in a corner of the hall and inside the galleries discovered another, dating to 1889, that had been covered up for decades. Throughout, they created additional arching portals, heightening the drama with chiaroscuro lighting effects.

Among the first objects visitors see upon entering is a newly conserved, painted terracotta bust of Bishop John Fisher, made around 1510 by the Florentine artist Pietro Torrigiano, who established himself in London. His Continental provenance exemplifies how the exhibits tell “such an international story,” says Burchard, noting that some of the objects on display were made in far-flung parts of the empire for the home market — like an early 1760s tapestry woven in India and possibly celebrating the English siege of Pondicherry. 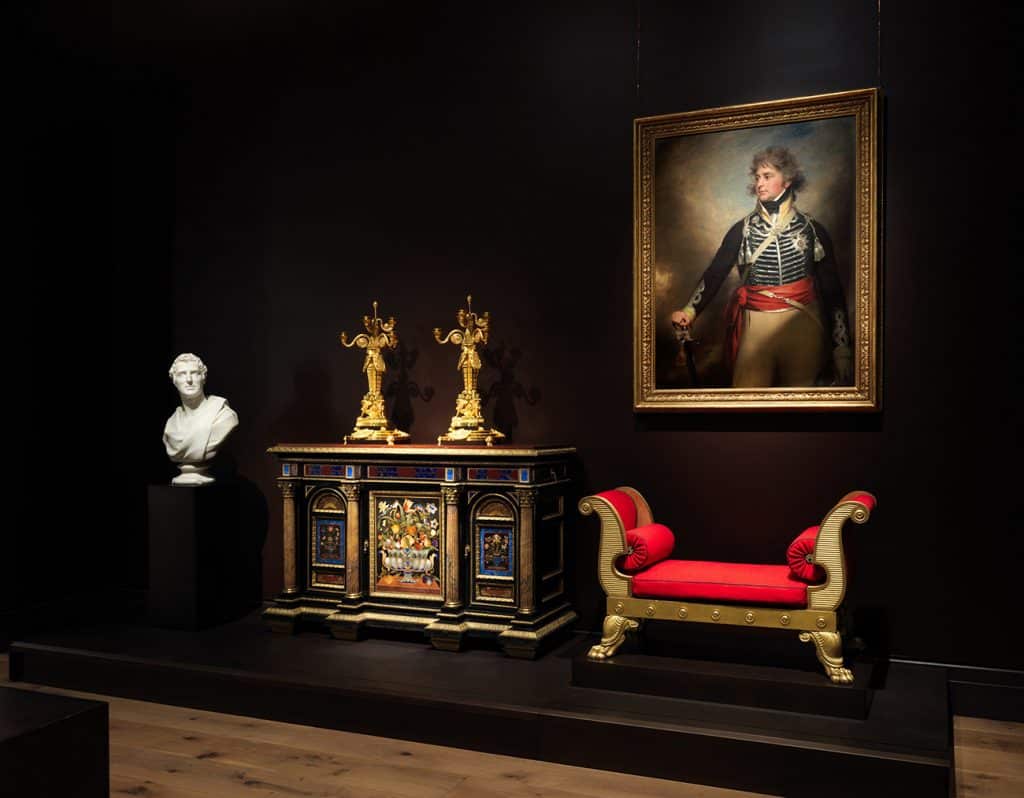 A pair of six-light candelabra, 1802–06, by Alexis Decaix stand atop a cabinet, 1820–30, by Robert Hume. This is flanked by an 1823 bust of Arthur Wellesley, 1st Duke of Wellington, by Sir Francis Chantrey and an early-19th-century gilded-wood bench by Thomas Hope, which sits under a portrait by Sir William Beechey of George IV when he was Prince of Wales, a version of a work Beechey originally painted in 1798.

The most memorable architectural artifact comes early in the galleries: a grand staircase from Cassiobury House, a 17th-century Tudor manor built just northwest of London and now lost to history. Its creator, thought to be English master Edward Pearce, went all out on the staircase’s arboreal carvings, painstakingly crafting an acanthus scroll, seed pods and oak leaves, with each segment ending in a lovely pinecone finial. In the galleries’ previous incarnation, the stair was roped off, but Standefer, Alesch and Met curators opened it up to give museumgoers the full lord- or lady-of-the-manor experience. Ascending it, Standefer notes, makes you feel as if you actually lived at Cassiobury House. 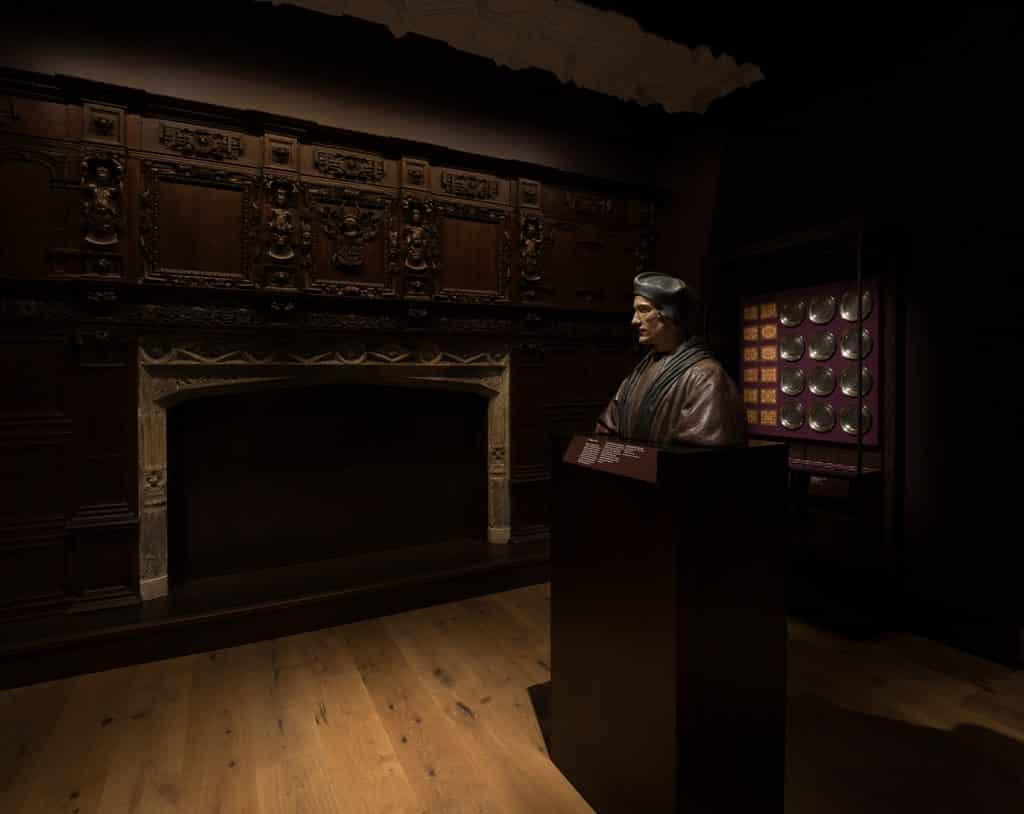 One of the first pieces museumgoers encounter when they enter the galleries is a newly conserved painted-terracotta bust of Bishop John Fisher, made in the first decades of the 16th century by Italian artist Pietro Torrigiano, a Florentine who worked in London. Photo by Richard Lee

Perusing the various smaller household objects on display, you soon notice that the fanciest objects— like gilded-silver dishes by 18th-century maker Lewis Mettayer — are never very far away from plainer ones. “High and low is a big theme,” Burchard explains. “We bring that up in every gallery.” He points to a lovely factory-made stoneware bottle with a thistle medallion from the late 17th century, which would have been an everyday item at the time. Pieces like that, Burchard says, tell us much about “the rising middle class and the development of a market for these goods.” 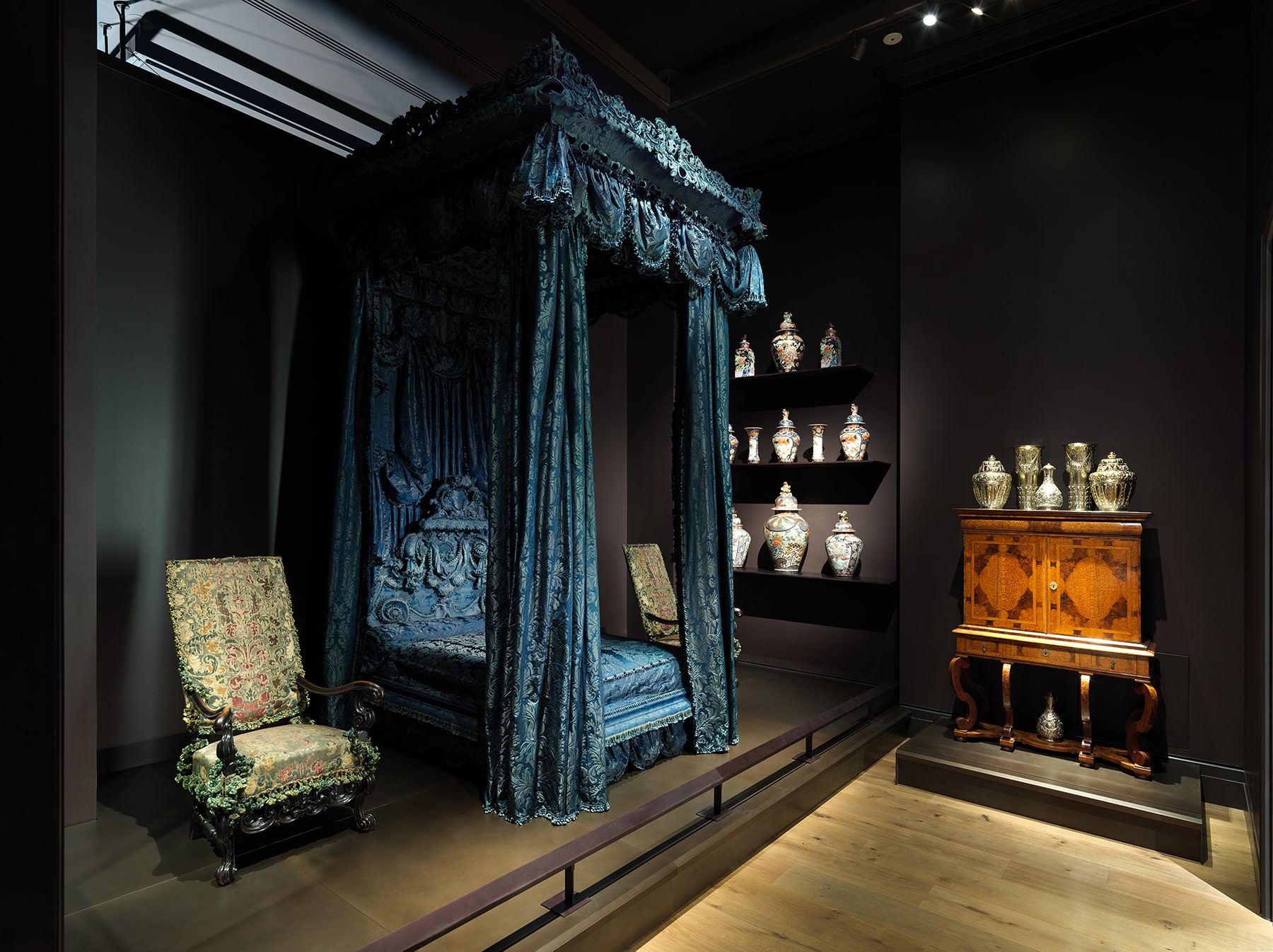 A highlight of the 17th-century gallery is the state bed from Hampton Court Castle, in Herefordshire, which was designed in the style of Daniel Marot for Thomas, Baron Coningsby. Made around 1698, it remained in the palace until 1925.

Those who want to steep themselves in the world of the aristocracy — and let’s face it, that’s part of the fun of this kind of exhibit — can still do so in the Met’s three famed British period rooms, one each from Oxford’s Kirtlington Park, Worcestshire’s Croome Court and London’s Lansdowne House, and all thoroughly re-conserved.

The rooms abound with exquisite detailing, as before, but they are no longer stuffed with objects. The goal, Burchard says, was to allow visitors to better see the architecture. Given the eminence of the rooms’ designers — famed Scottish architect Robert Adam, for instance, crafted Croome’s rich red tapestry room, festooning it with Gobelin hangings partly based on François Boucher canvases instead of wallpaper or paint — the choice to reduce the furnishings makes sense. 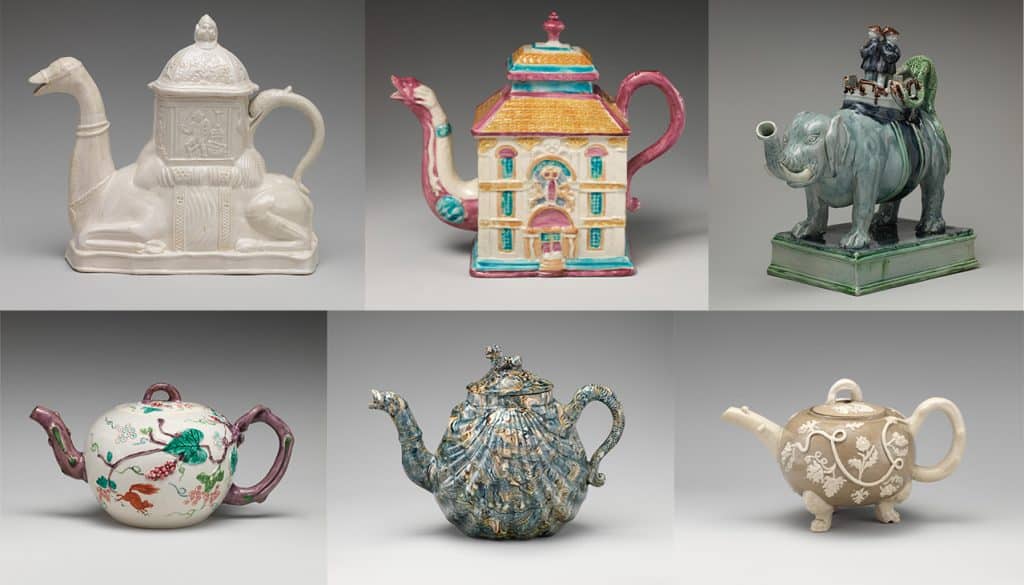 The most space is devoted to objects from the 1700s, which certainly satisfies Burchard, since that era is his specialty. The beauty and proportion of pieces from the 18th century convey a sense, he says, of “Britain’s importance in the world at the time, the flowering of the Enlightenment and the period’s obsession with classical architecture.”

His appreciation is borne out by such old favorites as a handful of blue-and-white Jasperware pieces made at the factory of Josiah Wedgwood. Also on display is a Wedgwood antislavery medallion. This is one of several places where the exhibition brings up slavery, which is pertinent since production of the commodities driving the period’s artistic innovation — tea, sugar, coffee, cocoa — relied on colonialism and enslaved people. 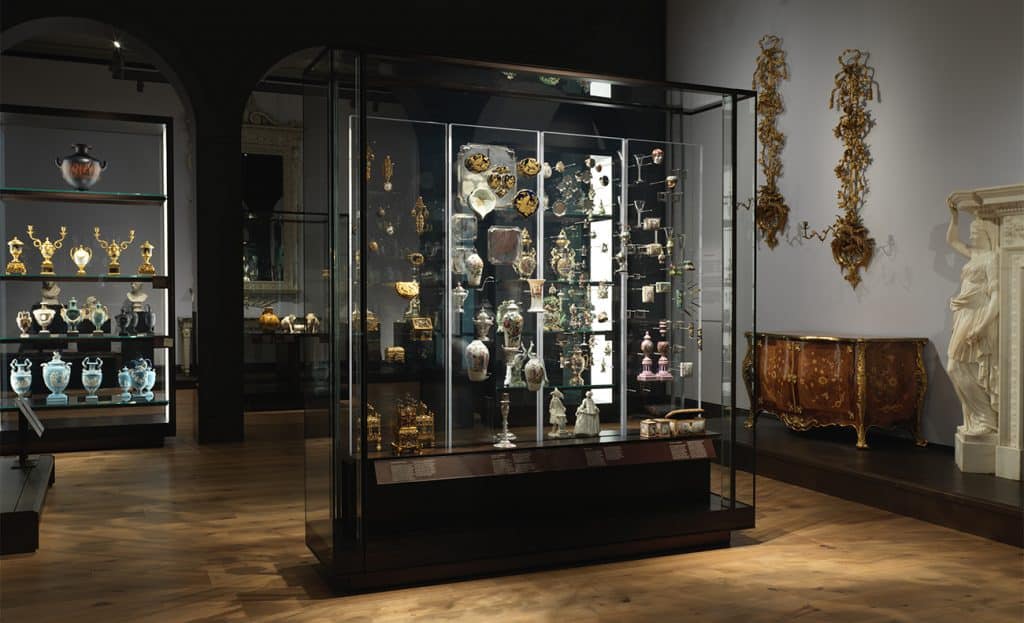 Associate Met curator Wolf Burchard says that the beauty and proportion of pieces from the 18th century — which get the most space in the galleries — convey a sense of “Britain’s importance in the world at the time, the flowering of the Enlightenment and the period’s obsession with classical architecture.” Photo by Richard Lee

And about those teapots: The two brilliantly lit, curved and double-sided glass cases filled with them will surely be among the more Instagrammed vignettes of the new galleries. “We wanted the galleries to be interactive and immersive,” says Standefer. “You’re amid hundreds of teapots, not just looking at one.” The variety is amazing. One example, placed roughly at eye level, depicts George Washington on one side and his wife, Martha, on the other. Turns out they were celebrities back in England, too. 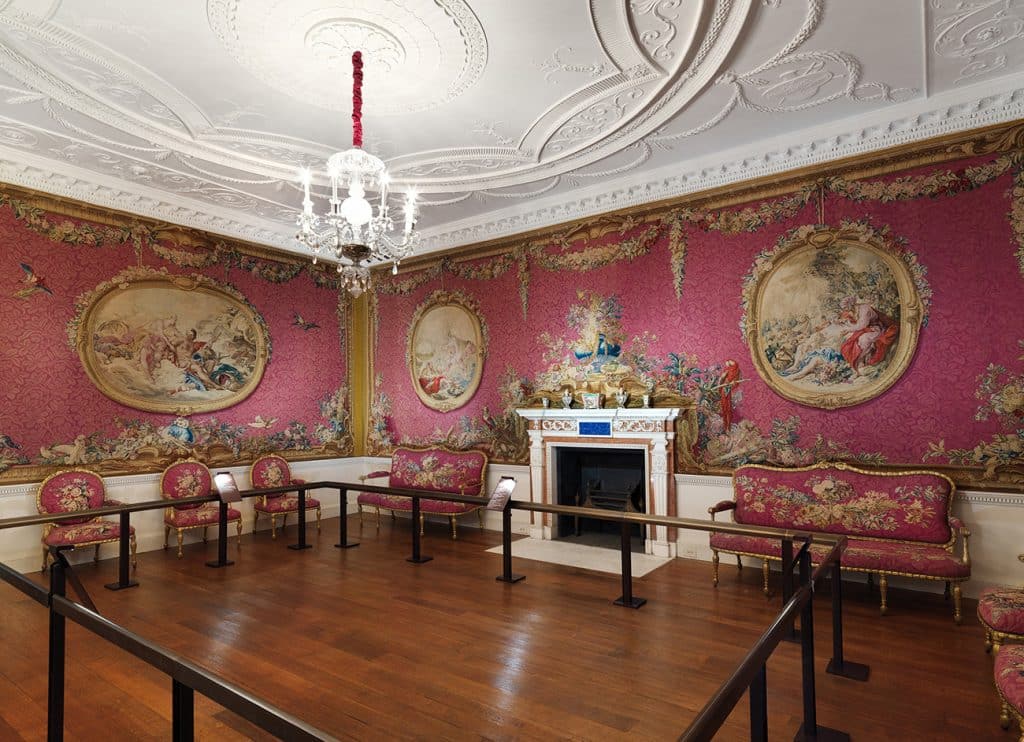 Among the gallery’s three period rooms is the Tapestry Room from Worcestershire’s Croome Court. It was designed by Robert Adam, who decorated it with Gobelin hangings based in part on François Boucher canvases. 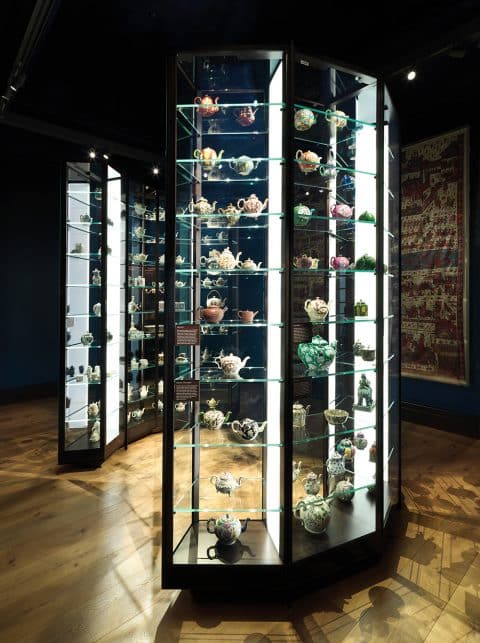 The galleries’ teapots are shown off in gently curving, double-sided display cases. “We wanted the galleries to be interactive and immersive,” says Standefer. “You’re amid hundreds of teapots, not just looking at one.”

When the galleries were created, in the 1920s, Victorian was decidedly “out”; the new configuration gives much more room to the period. “Now, we have an over-the-top space to match that ethos from the Victorian era,” says Burchard.

One of the Met’s totems of the time is a massive oak sideboard designed in 1866 by Bruce James Talbert and made by Holland & Sons. The elaborate Gothic-style piece, inlaid with ebony and topped by a small cross, was acquired in 2015 with future inclusion in the renovated galleries in mind — many of the items on display throughout, in fact, were bought recently for that purpose. “Our patrons have been wonderful,” says Burchard, referring to the group who donated for the sideboard. “I know that they wouldn’t exactly put this in their living rooms, but they know it’s important.”

Keeping a stiff upper lip while doing what needs to be done? How very British.