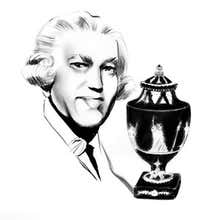 Arguably the most celebrated of all English ceramics makers, Wedgwood was founded in 1759 by Staffordshire potter Josiah Wedgwood (1730-1795). The company is famed for its Jasperware — molded Neoclassical stoneware vases, plates and other pieces, inspired by ancient cameo glass, featuring white figures, scenes and decorative elements set in relief on a matte colored background. The best-known background hue is light blue, but Wedgwood’s iconic silhouettes also appear on green, lilac, yellow, black and even white grounds. Some pieces use three or more colors.


The Wedgwood firm first came to prominence for its tableware, which quickly gained favor in aristocratic households throughout Britain and Europe. In 1765, Wedgwood was commissioned to create a cream-colored earthenware service for Queen Charlotte, consort of King George III. The queen was so thrilled with her new china that Wedgwood was given permission to call himself “Potter to Her Majesty,” and the decorative style became known as Queen’s Ware. Not to be outdone, Catherine the Great of Russia commissioned her own set of Wedgwood china in 1773. Nearly 200 years later, the firm created a 1,200-piece service for the coronation of Queen Elizabeth II. In recent years, leading designers including Jasper Conran and Vera Wang have collaborated with Wedgwood — in the tradition of such distinguished 18th century artists such as the painter George Stubbs and metalsmith Matthew Boulton.


From plates and other dinnerware to decorative items like urns, cachepots and candlesticks, Wedgwood designs lend a traditional air to Anglophile interiors. And even if you have to make your own tea, you may find it comforting to sip it from a delicate cup that was manufactured in the same Stoke-on-Trent kiln that produced Her Majesty’s tea service. Be sure to keep your pinky raised.

Large Antique Wedgwood Coffee Pot of Glazed Cane-Yellow Stoneware, circa 1830
By Wedgwood
Located in New York, NY
The luscious cane-yellow color of this coffee pot was a Wedgwood specialty in the 1830s. The inspiration for this special color was fields of wheat. So it makes sense that the finial...
Category

Ralph Lauren Wedgwood Patchwork Dinnerware ~ 4 Place Settings
By Wedgwood, Ralph Lauren
Located in New York, NY
A 20-piece set comprised of 4 five-place settings in the Patchwork pattern by Wedgwood for Ralph Lauren. Made in England, circa 1990. This rare and out of production pattern feature...
Category

Ralph Lauren Wedgwood Patchwork Serving Set, 5 Pieces
By Wedgwood, Ralph Lauren
Located in New York, NY
A five-piece serving set in the Patchwork pattern by Wedgwood for Ralph Lauren. Made in England, circa 1990. This rare and out of production pattern features a blue/white/pink/multi...
Category

Wedgwood Decorated Black Basalt Inkstand
By Wedgwood
Located in New Orleans, LA
This enchanting antique Wedgwood black basalt inkwell is crafted in the form of an ancient oil lamp. With a removable well and holes for storing pens and quills, it is decorated with...
Category

Pair of Wedgwood Neoclassical Blue Jasperware Urns
By Wedgwood
Located in New Orleans, LA
This rare and beautiful pair of urns were crafted by Wedgwood in the firm’s famous pale “Wedgwood blue” jasperware so prized by collectors and connoisseurs alike. Bearing a shape rec...
Category

Wedgwood Lady Templeton Green and White Jasper-Dip Coffee Pot
By Wedgwood
Located in New Orleans, LA
This soft green and white coffee pot by Wedgwood features the rare and highly prized applied relief work of Lady Templeton, the only woman to ever directly collaborate with the creat...
Category

Wedgwood Black Basalt and Encaustic Enamel Rum Kettle
By Wedgwood
Located in New Orleans, LA
Crafted by Wedgwood, this rare, round-shaped rum kettle is comprised of black basalt and features a molded bail handle and glazed interior. Referred to as “the widow,” a “Sybil” figu...
Category

Blue Canada Coat of Arms Wedgwood Jasperware Dish, England
By Wedgwood
Located in Oklahoma City, OK
Jasperware dish in blue and white. This oblong dish with scalloped edges is blue with white floral decorations at the edges. At the center is the Canada coat of arms. Signed at botto...
Category

Blue Round Wedgwood Jasperware Dish with Man and Floral Detail, England
By Wedgwood
Located in Oklahoma City, OK
Jasperware dish in blue and white. This round dish is blue with white floral decorations at the edges. At the center, a man with a beard is featured. Signed at bottom Wedgwood Made i...
Category

Wedgwood Pitcher Made of Rosso Antico Stoneware Painted with Enameled Flowers
By Wedgwood
Located in New York, NY
Provenance: With a paper sticker from the Polikoff Collection #252 Wedgwood made this lovely Rosso Antico pitcher circa 1850. It is decorated with enameled Chinese style peony flowe...
Category

Wedgwood Creamware Chestnut Basket
By Wedgwood
Located in West Palm Beach, FL
Antique Wedgwood creamware chestnut basket in very good condition. This basket for today's use would be great filled with cherries, strawberries or grapes. There are no chips or cr...
Category

Pair of Wedgwood Chestnut Baskets with Matching Under Plates
By Wedgwood
Located in West Palm Beach, FL
Pair of early 19th century chestnut creamware baskets with underplates. They are trimmed with a soft celery green. The pair of baskets are hand woven into what is considered a basket...
Category

Pair of Wedgwood Chestnut Baskets with Matching Under Plates

Wedgwood Tazza Very Decorative with 3 Dolphins Stand, 19th Century
By Wedgwood
Located in Paris, FR
This Wedgwood tazza is decorative Delphin is a brightly decorated compote presented as a large clamshell mounted on three dolphins on a three-point base. In typical Majolica colors, ...
Category

Basalt Bust of Plato, Wedgwood, circa 1800
By Wedgwood
Located in Melbourne, AU
A fine, early bust of the eminent Greek philosopher. Wedgwood produced a large number of library busts in black basalt, which has an appearance similar to that of ancient bronze.
Category

Basalt Bust of Plato, Wedgwood, circa 1800

Lioness Vase, Erling Olsen, Wedgwood, circa 1930
By Wedgwood
Located in Melbourne, AU
Designed by Erling B. Olsen, who worked for Wedgwood circa 1930-1935 before moving to Spode. Although Olsen designed quite a number of shapes for Wedgwood, they are rarely seen on...
Category

Portland Vase, Full Sized, Wedgwood, circa 1870
By Wedgwood
Located in Melbourne, AU
A full sized Portland vase in solid black jasper. This is the 'undraped' version, meaning it follows the original, rather than having draperies strategically placed. A superb exam...
Category

Basalt Portrait Medallion, Tiberius Augustus, Wedgwood, circa 1775
By Wedgwood
Located in Melbourne, AU
A fine large self-framing portrait medallion of the Emperor Tiberius Augustus, second emperor of Rome. Unmarked, as were many of these medallions.
Category

Basalt Portrait Medallion, Oliver Cromwell, Wedgwood, circa 1775
By Wedgwood
Located in Melbourne, AU
A self-framing portrait medallion of Oliver Cromwell, MP: rebel, regicide, suppressor of Ireland, persecutor of Catholics, and Dictator. He was posthumously beheaded and hung in chai...
Category