What’s Behind the English Ritual of Afternoon Tea?

Here's a brief history of the 350-year-old tradition, plus tea-time-ready interiors and accoutrements.
by Heather Rabkin
Pin
Share
Tweet
Email 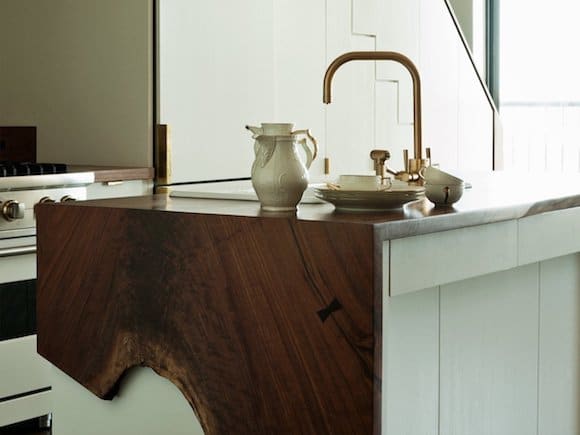 Tea service stacked up in a Brooklyn kitchen designed by Workstead. Photo by Matthew Williams

Tea drinking has been a royal preoccupation for going on 350 years. It all began in 1662, when Portugal’s Catherine of Braganza brought a canister of tea with her as part of her dowry when she arrived in England to wed King Charles II.

The beverage made its way into 19th-century daily consumption when Queen Victoria’s lady-in-waiting, the Seventh Duchess of Bedford, complained of a “sinking feeling” in the late afternoon before dinnertime. Her remedy? A cup of Darjeeling served alongside bread with butter, biscuits and cake.

This ritual transformed into afternoon tea, in which Queen Victoria happily took part. Soon, society women adopted this 4 p.m. tradition, dressing up for the occasion. It was most often held in the drawing room.

Today, Queen Elizabeth II continues to take her tea — Earl Grey or Darjeeling are preferred — very seriously. She begins the day promptly at 7:30 a.m. with a breakfast tea tray and has afternoon tea at 4 p.m. with an assortment of scones and canapés.

And Brits throughout the kingdom continue to embrace the centuries-old custom, even integrating tea time into their interiors. Afternoon tea promises a daily moment to pause, reflect and sip a comforting beverage.

As Henry James noted, “There are few hours in life more agreeable than the hour dedicated to the ceremony known as afternoon tea.” Here, we present interiors and the accoutrements needed to properly partake. 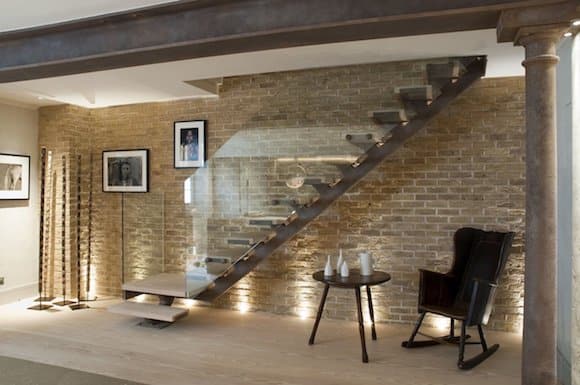 Tea is served at a round table under the stairs in a four-story London townhouse by Riviere Interiors. Photo by Debbie Patterson

Round tables were an integral feature in 18th-century tea houses and taverns, notes antique dealer and decorator Robert Young of Riviere Interiors, adding that “it is so simple to draw a chair up to a circular occasional table.” He recommends choosing one that is “large and robust enough to put a tray on. It is also important that they have a good overhang to the top, allowing legroom at close quarters.”

For the renovated Victorian townhouse in London shown above, Young wanted a quiet place for his client to “sit with the papers, have his tea and be comfortable. The table and chair we selected both have wonderfully rich warm patinas that contrast well with the space’s clean lines and contemporary materials.” 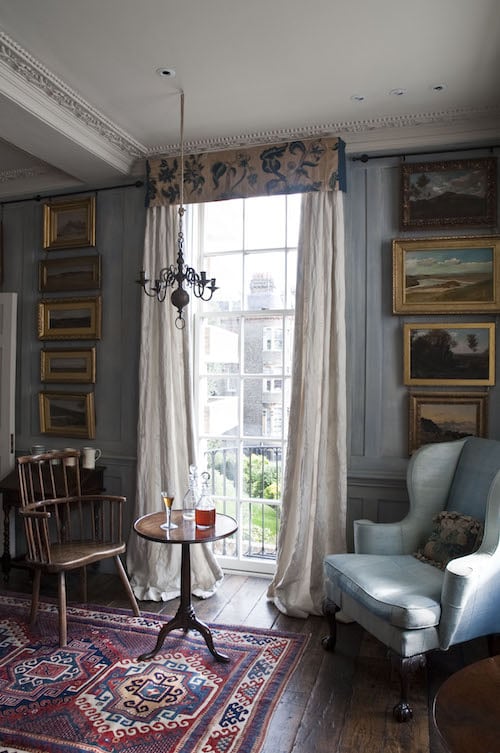 And for a circa-1670, Charles II–period townhouse, Young’s clients requested a living room equipped for “entertaining and conversation around the main fireplace.” He carved off a portion of the room near a full-length window overlooking London as a niche for sipping tea. “The spot was specially created for them to take their tea. It is wonderfully serene, and there is an intimate and comfortable feeling to the space,” Young says. 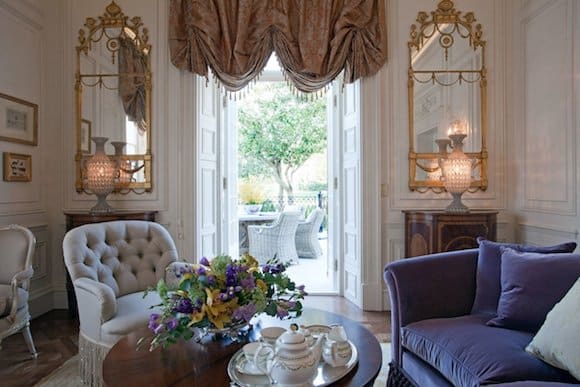 In a Channel Islands morning room by Janine Stone, a plush sofa and a low armchair make for comfortable seating while sipping tea. Photo by Tom Sullam

Interior designer Janine Stone integrates bespoke details into her projects, which range from a country house in Cheshire to a vacation home in the Channel Islands. In the latter residence’s morning room, the floor-to-ceiling renovation included rare-wood paneling and artisanal plasterwork.

Tea can be comfortably enjoyed from an overstuffed sofa and a low armchair. Afternoon tea also goes by the moniker “low tea,” as mid-19th-century tea service was taken on low decorative tables in a lady’s boudoir or drawing room. 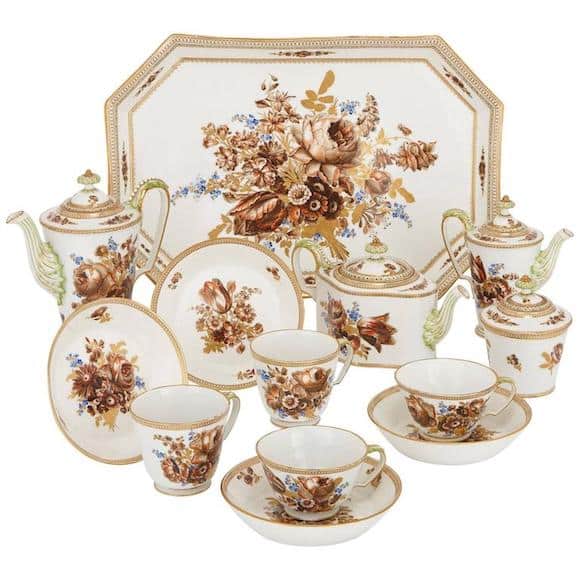 This year marks the official celebration of Queen Elizabeth II’s 91st birthday. Her majesty is said to prefer a bone-china cup and saucer for her tea. While she does indulge in the daily ritual, she abstains from sugar in her tea and only nibbles at a small portion of the sweets on her afternoon tray. (It is rumored that she crumbles scones on the carpet for her corgis.)

Cups and pots made from china have been a hallmark of tea service since Victorian times. This tea and coffee set was made by Germany’s Meissen Porcelain in the early 1800s. 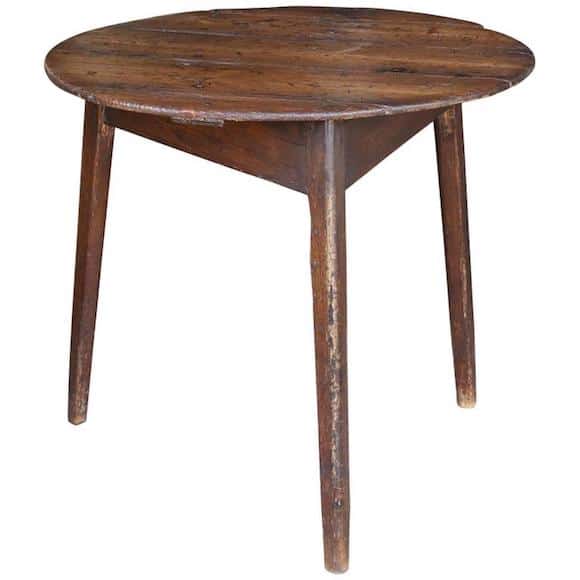 A cricket table is one of Young’s preferred furnishings when arranging comfortable spaces for tea. “Tripod tables adapt well,” the designer says. “A tablecloth can immediately dress it up and lend a smart sense of occasion.” Here, a hand-carved cricket table made between 182o and 1840 retains a layer of handsomely worn paint. 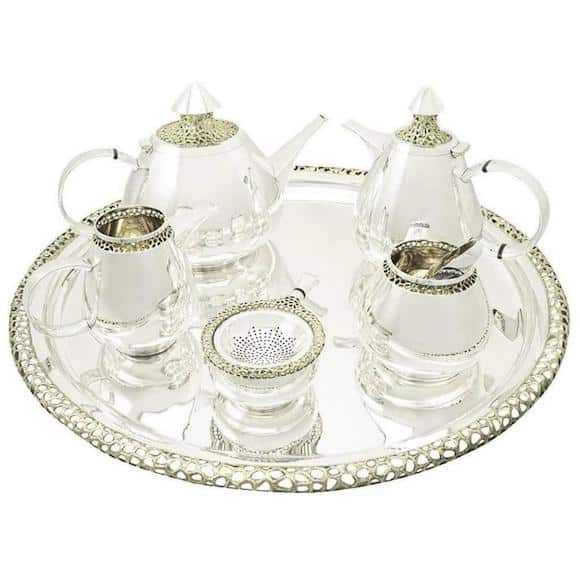 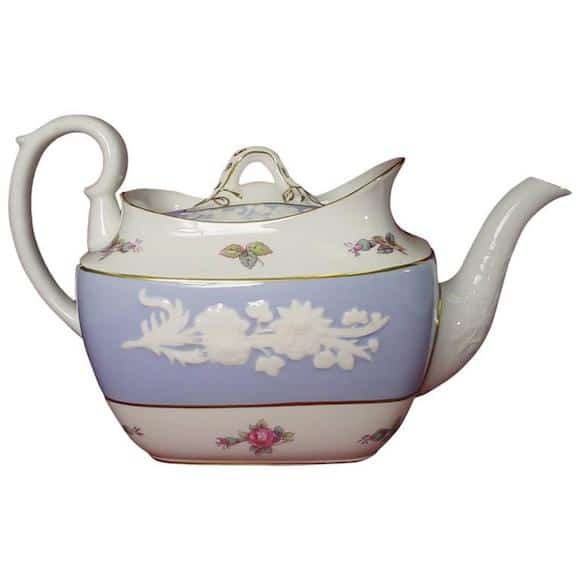 Spode, founded in Staffordshire in the West Midlands, became known for its blue-on-white palette in 1785. One of the company’s designers developed a specific cobalt hue for their tea pots, trays, bowls and more. The motif on this pot is called the Maritime Rose R4118 pattern, produced between 1954 and 1972. 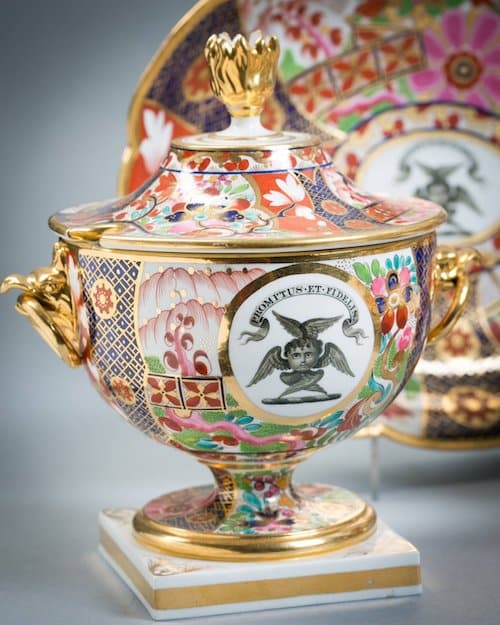 Porcelain tea services were ideal surfaces for aristocracy to display family crests upon. The Carruthers surname dates to at least 12th-century Scotland. Here, the Crest of Carruthers adorns a 90-piece porcelain service by Flight, Barr & Barr, including 18 tea cups and saucers and 23 dessert plates. The circa-1815 set was made in England and colorfully displays the family motto: Promptus et fidelis (ready and faithful). 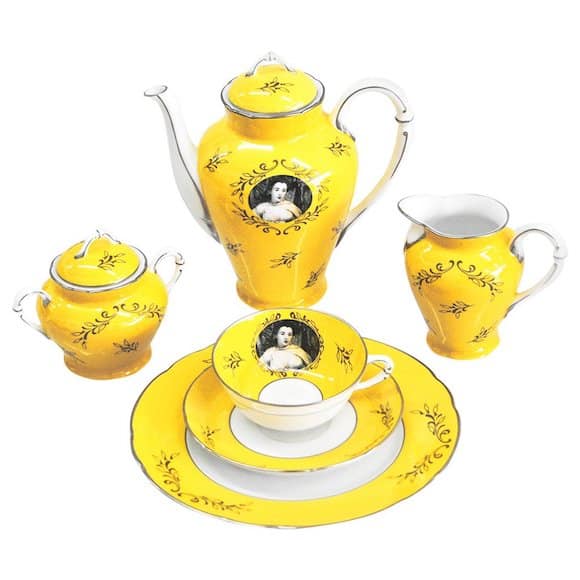 Naturally, when Cindy Sherman decided to make a tea set, the famed self-portraitist decorated it with a picture of herself in disguise. Here, Sherman takes on the likeness of Madame de Pompadour, the authorized mistress of Louis XV. The original set was produced by the Manufacture royale de porcelaine de Sèvres in 1756, and Sherman’s version was printed and painted at the Ancienne Manufacture Royale de Limoges in 1990.