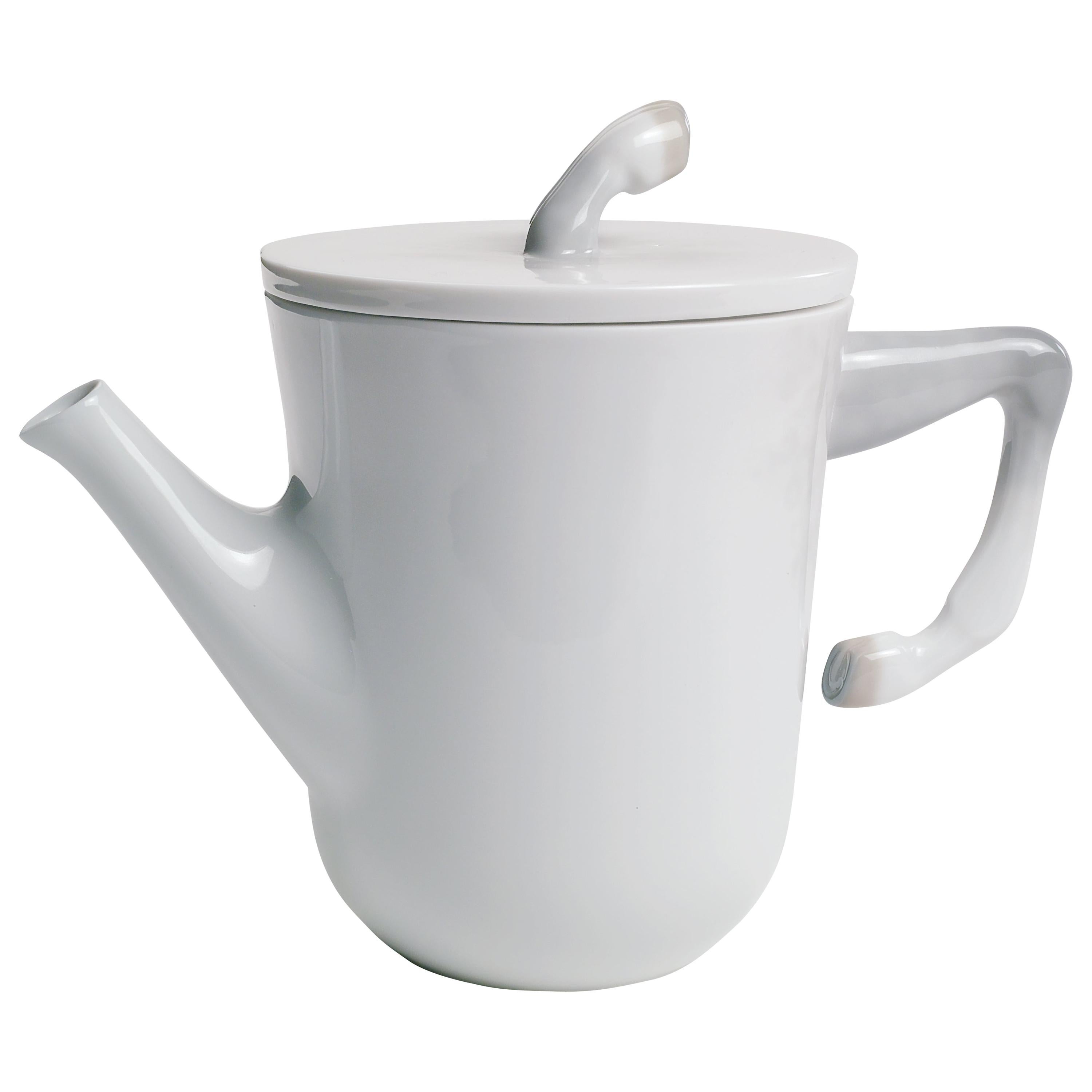 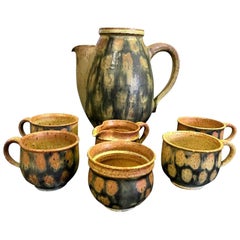 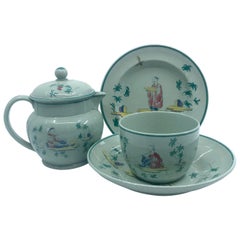 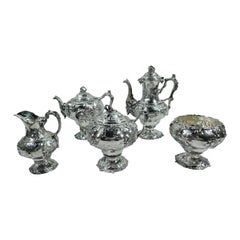 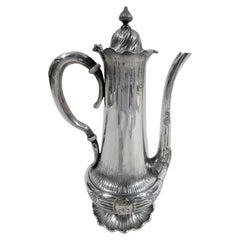 Porcelain Teacup Trio, Spode Imari Tobacco Leaf Patt. 967, Regency ca 1815 '2'
By Spode
Located in London, GB
This is a beautiful true trio made by Spode around 1815. The set is decorated in the famous Imari Tobacco Leaf pattern 967. In the early 19th Century, cups and saucers were sold as "...
Category

Belleek Porcelain Cabaret Tea Set, White Echinus, Victorian, 1867-1926
By Belleek Pottery Ltd.
Located in London, GB
This is a very rare Belleek cabaret set for two, or "tête a tête", made in the famous Echinus series brought out in 1867. The tray, teapot and milk jug carry the 1st Black Mark, used...
Category

Coalport John Rose Porcelain Tea Service, White and Gilt, Georgian, circa 1795
By Coalport Porcelain, John Rose
Located in London, GB
This is a beautiful tea service made by John Rose (Early Coalport) in circa 1795, which was the Georgian era. The service is beautiful white with gilt decorations and it consists of ...
Category

Black Dragon, Coffee Set with Six Contemporary Porcelains with Decorative Design
By Vito Nesta
Located in Milan, IT
Black dragon pool is a collection of plates and vases inspired by the famous Chinese pond of the same name, located in the scenic Jade Spring Park. The designs in this collection fea...
Category

Black Dragon, Tea Set with Six Contemporary Porcelains with Decorative Design
By Vito Nesta
Located in Milan, IT
The Mediterraneo collection is the result of Vito Nesta’s reflection on the line between reality and fantasy. The architectures of the doors depicted on the plates arise from technic...
Category

20th Century Italian Solid Sterling Silver Tea, Coffeset with Tray
By Argenterie di Milano
Located in VALENZA, IT
A magnificent, Russian style tea or coffee set on a salver. The tray, made from plate silver, was completely hand-crafted from a raw sheet and its outer rims are embellished with a b...
Category

Shelley "Dainty White" Porcelain Coffee Service, Art Nouveau, 1926-1940
By Shelley Pottery
Located in London, GB
This is a charming coffee service for four in the "Dainty White" design of Shelley. This design is very desired and was made between 1926 and 1940, as can be seen from the back stamp...
Category

Lladro Equus Teapot by Bodo Sperlein
By Bodo Sperlein, Lladro
Located in New York, NY
Glossy white porcelain teapot designed by Bodo Sperlein from the Equus collection. This coffee cup and saucer is part of the Equus series, one of the most innovative and bold project...
Category

Tea Kettle by Dr. Christopher Dresser
By Christopher Dresser
Located in Los Angeles, CA
Unusually geometric in form, this extraordinarily inventive copper and brass kettle looks like a Bauhaus thesis project from 1930 but was actually created in England in 1878 by the w...
Category

Antique George V Sterling Silver Cream Jug by A E Jones
By Albert Edward Jones
Located in Jesmond, Newcastle Upon Tyne
A fine and impressive antique George V English sterling silver cream jug made by A E Jones in the Arts & Crafts style; an addition to our range of collectable silverware This fine...
Category

Spode Porcelain Teacup Trio, Imari Tobacco Leaf Patt. 967, Regency ca 1815 '1'
By Spode
Located in London, GB
This is a beautiful true trio made by Spode around 1815. The set is decorated in the famous Imari Tobacco Leaf pattern 967. In the early 19th Century, cups and saucers were sold as "...
Category

Meissen Porcelain Service Tea Purple Indian Pattern No. 343410 '12 Cups'
By Meissen Porcelain
Located in Prato, Tuscany
Meissen porcelain tea set; the set consists of a teapot, a sugar bowl, and twelve cups with plate; the various pieces are made of fine hard white porcelain painted with the "Purple I...
Category

Memphis Teapot by Marco Zanini for Bitossi, Italy
By Bitossi, Marco Zanini
Located in Portland, ME
Memphis style teapot designed by Marco Zanini. This striking teapot is part of a collection of functional tableware pieces designed by Zanini in the 1980's, for Italian Ceramics Make...
Category