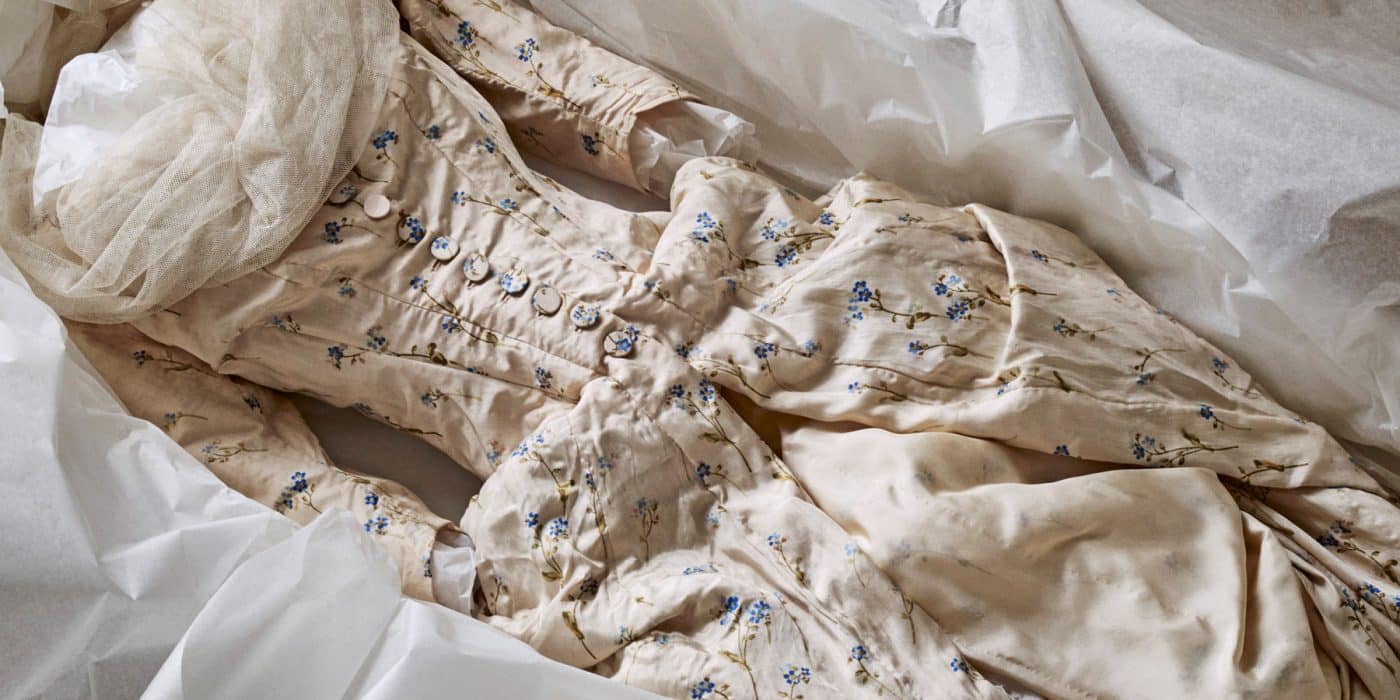 Well regarded as a repository of priceless artworks and antiques, the famed stately manor in the Derbyshire countryside has now revealed never-before-seen treasures from its fashion archives. 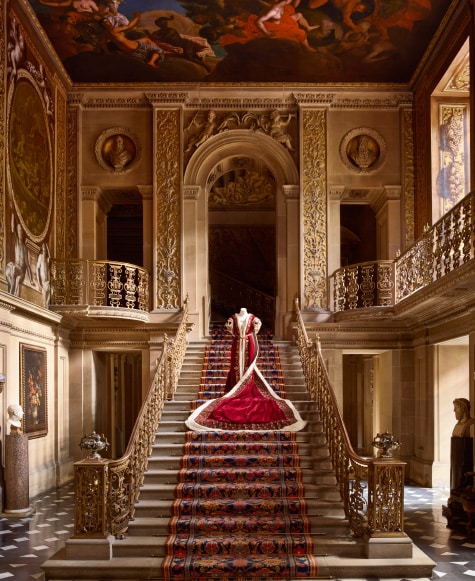 July 17, 2017A new book and related exhibition celebrate five centuries’ worth of clothing commissioned and worn by the aristocratic residents of England’s stately Chatsworth House. The garments include the Mistress of the Robes coronation gown (above), worn by the Duchesses of Devonshire in 1911, 1937 and 1953, and an 1889 shepherdess costume by Russell & Allen. Both photos by Thomas Loof. All photos © Chatsworth House Trust, unless otherwise noted

I suppose this is the fashion equivalent of a Rembrandt in the attic,” writes Laura Cavendish, Lady Burlington, in her introduction to House Style: Five Centuries of Fashion at Chatsworth (Skira Rizzoli), which she co-authored with Hamish Bowles, Vogue’s European editor at large. She describes Bowles as “skipping” across the room, having expertly identified an unlabeled 1953 Christian Dior haute couture gown in the archives of Chatsworth House, perhaps Britain’s stateliest stately home, which belongs to the family of her husband, William Cavendish, in line to be the next Duke of Devonshire. The Dior, along with hundreds of iconic designs and sartorial memorabilia, including fine jewelry, not only figure in the book but can be seen in a lavish exhibition, “House Style,” that has taken over some two dozen of Chatsworth’s 297 rooms through October 22.

Home to the Cavendish family since 1549 (and welcoming visitors since the late 1950s), Chatsworth has long been renowned for its baroque architecture, its extensive Derbyshire parkland designed by Capability Brown, its ornate interiors and its remarkable collection of art and antiquities, which spans 4,000 years and happens to include a couple of  Rembrandts. This is the first time, however, that clothing has been put front and center.

The pink silk-satin Dior discovered by Bowles, and now on display, was made for Deborah Devonshire (née Deborah Mitford, mother of Stoker Cavendish, the current duke), who turned “privilege into profit,” according to her Financial Times obituary, by opening Chatsworth to visitors, installing a shop and café and introducing product lines, including handsome garden furniture. As the Economist admiringly put it in its obit, she remade Chatsworth as “a self-sustaining business and a brand, in the nicest possible way.” The “House Style” exhibition is the latest initiative created to entice new — and younger — visitors. Laura Cavendish (a fashion editor and former model) conceived the idea seven years ago while digging out a family christening robe for her son, James, who is next in line to become Duke of Devonshire after her husband. 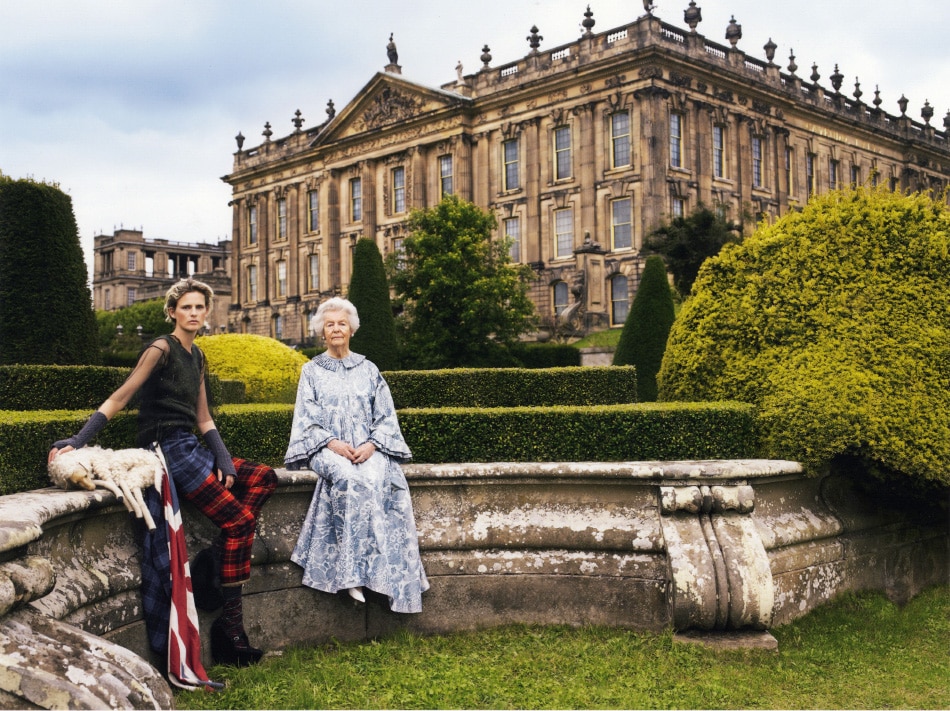 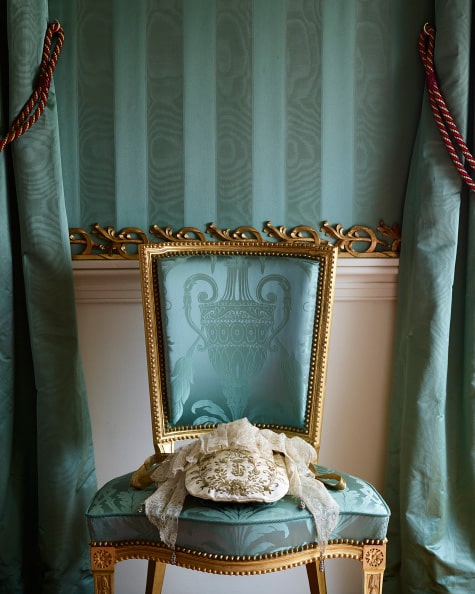 A silk and lace bag with gold-work embroidery, dating to the 1890s and belonging to Louise, Duchess of Devonshire, sits on a late 18th-century George III giltwood chair by François Hervé. Photo by Thomas Loof

Bowles, who owns a remarkable collection of documented haute couture and historical vintage fashion, met Laura on a fashion shoot for Harpers & Queen some time ago, and they became fast friends. He was a natural to recruit for this project. Rummaging through the archives, Bowles was originally “somewhat underwhelmed,” he confesses, but the more that was unearthed, the more the exhibit took shape. “The turning point was finding Deborah Devonshire’s things at the Dower House while Laura visited Stella Tennant in Scotland,” he says. Tennant, of course, is the fashion model granddaughter of Debo, as she is known, and she has closets stuffed with designer one-offs. These, with Debo’s own clothes, became the foundation for the show, which pays homage to other famous Chatsworth women, such as Kathleen “Kick” Kennedy (JFK’s favorite sister, who disobeyed her family to marry William “Billy” Cavendish in 1944) and Adele Astaire (Fred’s sister, who married Lord Charles Cavendish, second son of the ninth duke, in the 1930s).

In her 2009 book, In Tearing Haste: Letters Between Deborah Devonshire and Patrick Leigh Fermor, Debo describes two of the outfits on display, which she and Tennant wore for a Mario Testino shoot commemorating Vogue’s 90th anniversary: “I’ve got a really beautiful dress, grand evening, given me by Oscar de la Renta, so that was my kit. They bound Stella’s legs, up to where they join her body, in tartan. A Union Jack flag hung from her waist and her top was what my father would have called meaningless…. We looked just like that [J.J.] Grandville drawing of a giraffe dancing with a little monkey. I was the monkey.” (Tennant’s outfit was by Junya Watanabe.)

“Chatsworth has long been renowned for its baroque architecture, its ornate interiors and its remarkable collection of art and antiquities. This is the first time, however, that clothing has been put front and center.” 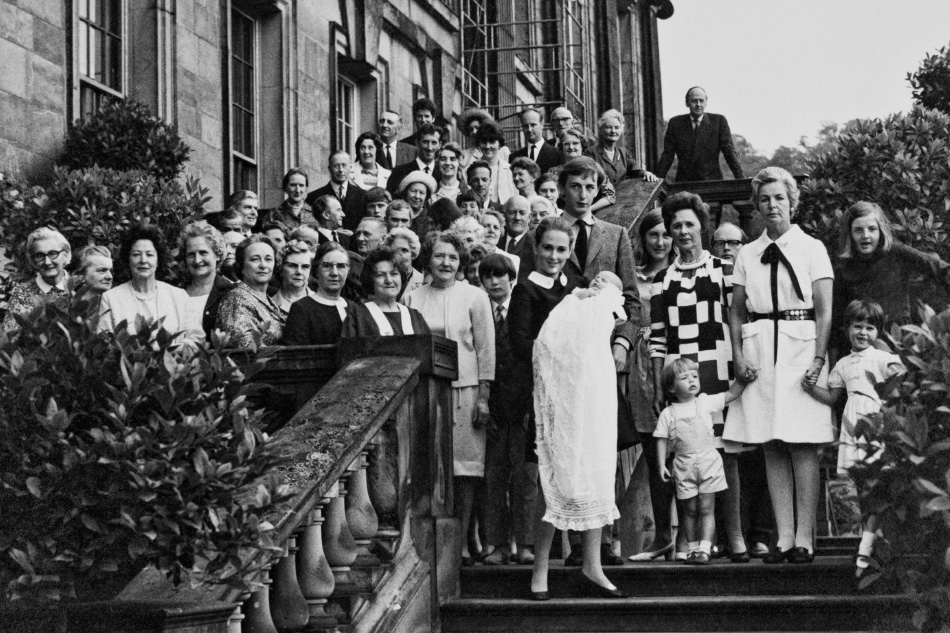 A family portrait from the Earl of Burlington’s 1969 christening shows the extended clan — and several fashions typical of the era. Photo courtesy of The Devonshire Collection 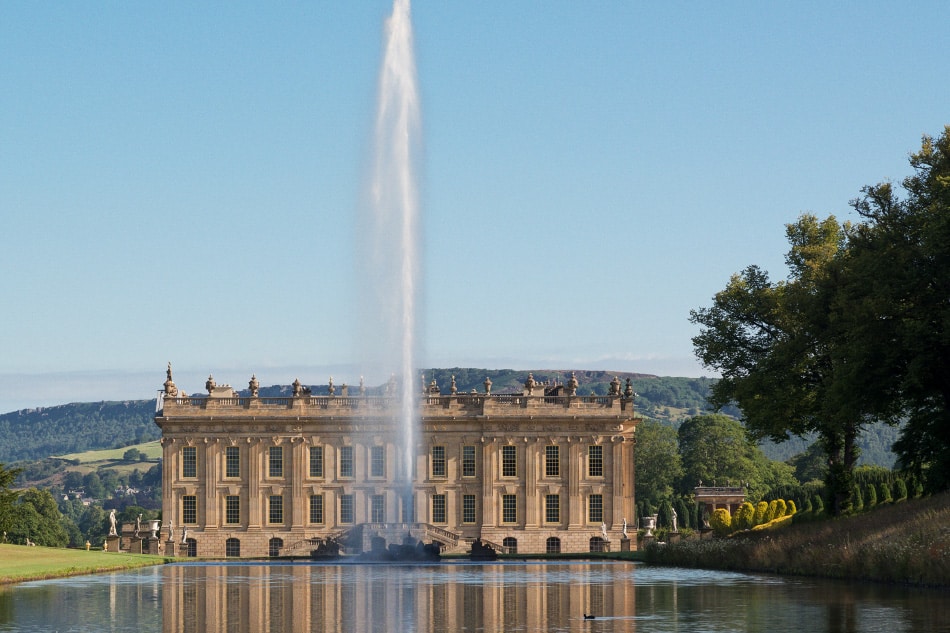 The 297-room Chatsworth House, in Derbyshire, is one of England’s stateliest stately homes. The fashion exhibition will be on view there through October 22. Photo by Thomas Loof 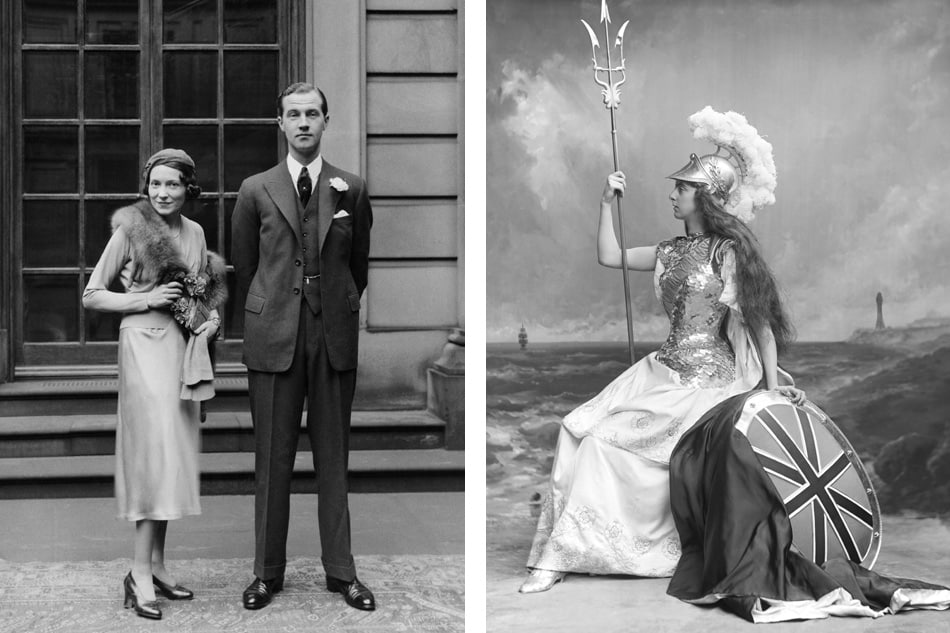 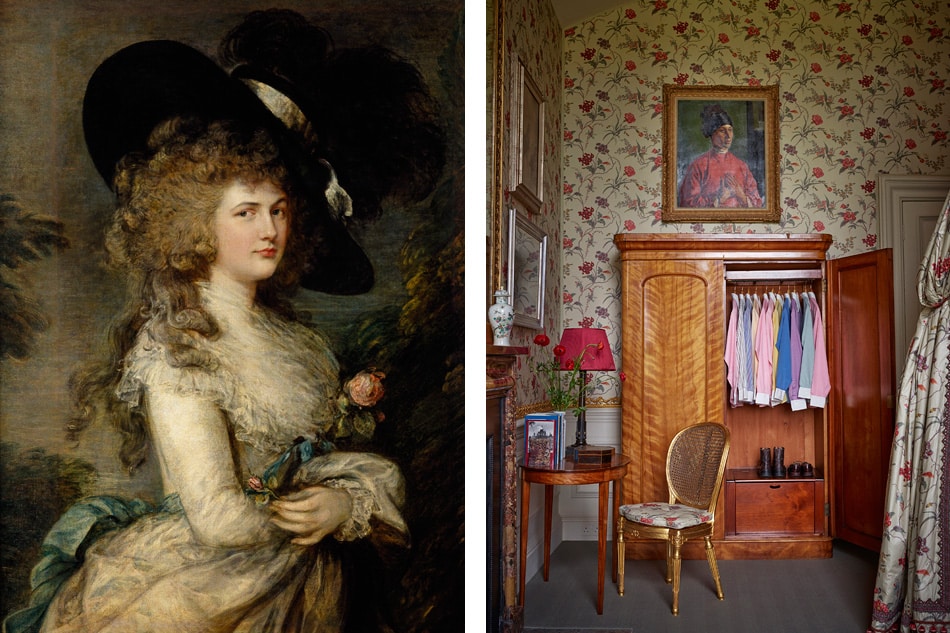 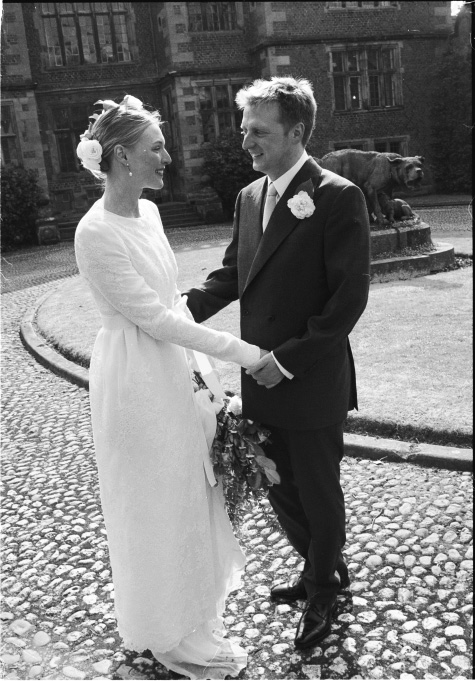 In line to be the next residents of Chatsworth, as the future Duke and Duchess of Devonshire, William Cavendish and the book’s co-author Laura Burlington were married in 2007. The bride wore a Tomasz Starzewski coat over an Alberta Ferretti gown. Photo courtesy of the Countess of Burlington

Bowles brought on theatrical designer and fashion historian Patrick Kinmonth, who, with his artistic partner Antonio Monfreda, took on the creative direction of the exhibition. (Kinmonth worked on 2004’s “Dangerous Liaisons” and 2006’s “AngloMania” shows, both at the Costume Institute of New York’s Metropolitan Museum of Art.) The result is layers of historic colors, shapes, patterns, fabrics and silhouettes, all presented in a modern way but with an aristo-eccentric bent. According to Kinmonth, “If you put the best with the best, it doesn’t matter if it was made today or in the seventeenth century.”

“What was clear from the beginning,” Bowles says, “was we all wanted the clothes to speak to the personalities across the centuries.”

And what personalities! What centuries! What style!

Coronation robes, footmen livery and shredded Alexander McQueen gowns set the tone from the start in the Painted Hall. The Queen of Palmyra outfit that Jean-Philippe Worth created for Duchess Louise to wear to the 1897 Devonshire House Ball is in the State Drawing Room with other equally opulent costumes. Her 1893 diamond coronet, made by A.E. Skinner using nearly 1,900 diamonds, can be seen near other family gems, including a selection of the current Duchess of Devonshire’s Andrew Grima modernist jewelry. Thomas Gainsborough’s late 18th-century painting of the fashion-forward Georgiana, Duchess of Devonshire, hangs adjacent to her collection of mineral specimens, an unusual passion for a woman in that era. A fascinating diversity of wedding dresses that speaks to the personalities of the Cavendish brides through the centuries is shown in the chapel with Damien Hirst’s St. Bartholomew, Exquisite Pain in the alabaster altarpiece.

Although it went to press before the exhibition was completed, the book contains many similarly deft juxtapositions of photos, and the text is consistently fascinating. The eccentricities of these aristos are made manifest by the inclusion of such miscellaneous personal effects as Tennant’s nose ring, Debo’s rubber chicken handbag and her Stubbs & Wootton velvet slippers adorned with an image of Elvis Presley’s face. Then there are her husband’s navy custom-made sweaters from the 1980s, each with a favorite phrase stitched in white across the front — “Bollocks,” “Just Stop Talking About Yourself” and “All Passion Spent,” among them.

“And do you know where we found those sweaters?” Bowles asks, laughing as he remembers the process of compiling the exhibition and book. “In one of those cheap cardboard suitcases!” 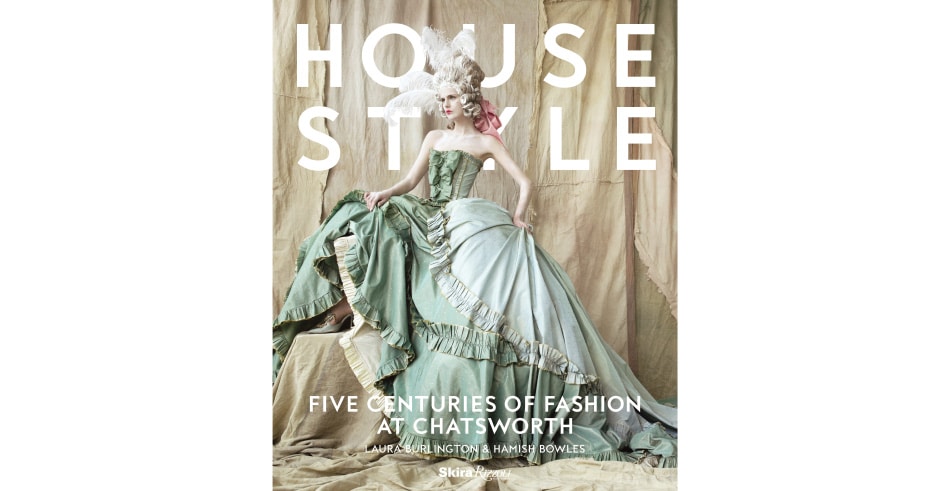