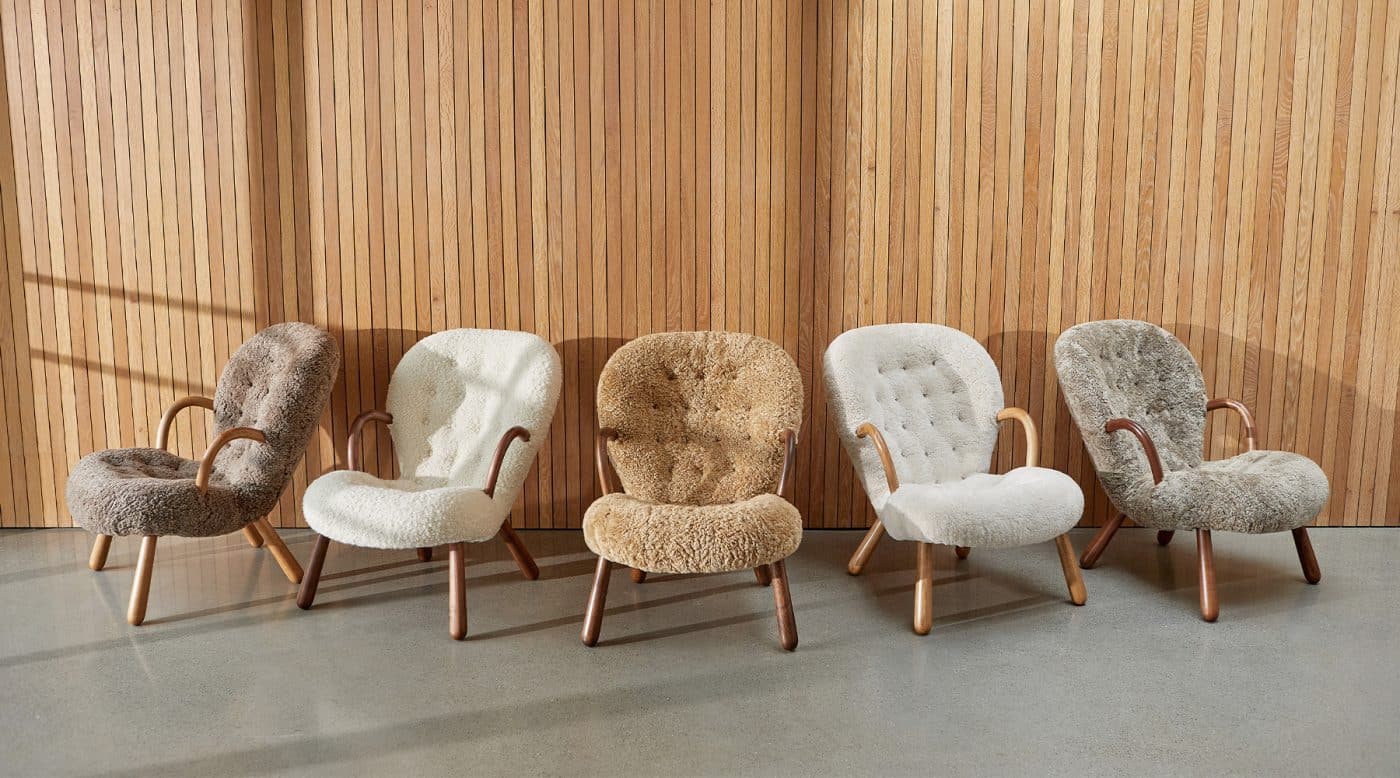 July 24, 2022According to Aaron FitzGerald, of Dagmar gallery, Arnold Madsen’s Clam chair is “one of the most sought-after and simultaneously misattributed and copied chair designs of the twentieth century.” In the past, it was ascribed to the Norwegian retailer Martin Olsen and then the Danish architect Philip Arctander. It was only through some dogged research by a team of international design historians and collectors that it was finally correctly associated with Madsen, an upholsterer by profession who created it in Copenhagen in 1944.

With vintage examples becoming increasingly rare, FitzGerald has obtained sole rights from Madsen’s estate to reproduce the design. Through July, it’s available exclusively via 1stDibs. “We’re no longer selling vintage ones in high numbers because the supply has more or less dried up,” FitzGerald explains, “and the ones that are left are incredibly expensive.”

A specialist in Nordic furniture from the mid-20th century, Dagmar was founded by FitzGerald in 2014. He had been working as a graphic and digital designer for a media tech company, but frustrated that his role was becoming increasingly corporate, he looked for something more creative to do.

“The idea for me was always to be a restorer first and a dealer second,” he says. “I’d been interested in Nordic design for a long time.” He started taking a course in furniture restoration in the evenings after work, and when the tech firm restructured, he took a buyout, using the money to acquire and restore some seminal pieces he really admired. Then, he gave himself six months to see if he could make a business out of it. The gamble has more than paid off.

In addition to his sales team, he employs four restorers and three upholsterers, located in a workshop on the premises. His aim has always been, he says, “to offer the best-quality furniture in London from the mid-century period. And there weren’t a huge number of people doing that.”

Some purists believe furniture of this kind should be left in its original condition. For FitzGerald, there is no catch-all answer. “You have to find the right spot between what the customer wants and what’s in the best interests of the piece itself,” he says. “A lot of the time, what we are doing is very targeted cleaning. There are those who might be tempted to sand certain rosewoods to get rid of little nicks and scratches. We would never do that. It destroys the integrity of the original wood. But on some later pieces, for example, we find a coating of polyurethane — a plastic finish that came into use in the nineteen sixties — which is now corrupted and yellowed but has perfectly protected the original wood underneath for fifty years.”

Dagmar’s artisans carefully remove this coating and refinish the raw wood with products like Danish oil, which contains a very small amount of resin hardener. For dining chairs made of an oily wood, like rosewood, they seal the surface with a natural shellac. “With mid-century furniture, less is more,” says FitzGerald, who advises buyers to work with dealers who have in-house restorers. Outside Denmark, those are very few.

With upholstered pieces, where what you see is mostly fabric, restoration is far less contentious. “If we bought an upholstered piece by an unknown designer in Denmark, we would totally refurbish it — replace every spring, take out the old padding and replace it, make the piece fireproof and finally cover it with a high-quality fabric or sheepskin,” says FitzGerald. “We spare no expense or time, and then it’s good to go for another thirty years.”

The majority of Dagmar’s customers are in the U.S., many of them interior designers. “Our big clients might have a house project of ten thousand square feet for which they need a huge amount of furniture,” he says. “If we have a vintage chair they want to use, it’s no good saying to them that we might have similar ones in stock within a year or two. They need something straight away.” This situation led him in 2020 to introduce a custom range of upholstered furniture, all made to order by the Dagmar teams and very much informed by the design aesthetic of the vintage pieces they already sell. “We have the in-house expertise,” FitzGerald says, “and we make the custom range using the same standards of craftsmanship as in vintage furniture.”

FitzGerald has an encyclopedic knowledge of Nordic mid-century furniture, reeling off names of designers and architects, famous and obscure. Among the lesser-known ones are Stefan Syrach Larsen, Sven Ellekaer and Henning Norgaard. “They were members of the third wave of designers, for whom Hans Wegner was a mentor,” he says. “They were pushing the genre to the next phase with their more futuristic vision.”

FitzGerald himself collects Swedish ceramics by the likes of Berndt Friberg and Stig Lindberg, but Danish design has a particular place in his heart. “It’s part of the country’s DNA — everything from streetlights to metro stations is exquisite. It’s who they are and what they do.”

Introspective caught up recently with FitzGerald to talk about his most important find, Her Majesty the Queen’s connection to Scandinavian design, an often overlooked Danish pioneer and his future plans.

What’s so special about the Clam chair?

Like Finn Juhl, Arnold Madsen didn’t have the same level of technical or formal training a lot of other designers had. He wasn’t a trained cabinetmaker, he wasn’t a trained architect, he was a trained upholsterer. He formed the chair in a very organic way without technical drawings, and that meant he pushed the boundaries.

The Clam doesn’t look like anything else from the period. It’s a very complex thing, as it’s curving in about eight different places and it has these stress points all over the joints. Madsen took a plaster cast of the design all around Copenhagen, and numerous cabinetmakers told him it was too hard to make. In Henry Schubell, he eventually found someone who was confident enough to take it on. Schubell left his job, and they started a company together to make the chair. The rest is history.

What is the rarest piece you have handled?

Jacob Kjaer, who was active in the late nineteen forties and early fifties, was commissioned to design the B-37 UN chair for the new United Nations headquarters in New York. The production was done in the U.S., but for the prototype, he teamed up with the cabinetmakers Christensen & Larsen, in Copenhagen. They used Brazilian rosewood and aniline leather and made very, very few of these originals, we think maybe twenty in all, possibly for rich Danish clients. We had one of them last year at Dagmar. I was so reluctant to see it go. It went to a client in Japan.

Do you have a lesser-known hero or heroine?

Apart from the obvious superstars, there is Nanna Ditzel, who designed jewelry, textiles, lighting, walking sticks, children’s toys and furniture. In terms of the standard of creativity and quality, everything about her work is inspiring!

Tell us about a favorite piece.

The story goes that HM the Queen, on a state visit to Copenhagen in the late nineteen fifties, was taken to the annual furniture makers’ exhibition and decided to buy several chairs designed by Ib Kofod-Larsen, and the piece was swiftly named the Elizabeth chair. It combines everything I find interesting about this period of Danish design. It is very refined but not stuffy, it has a modern feel to it, the cabinetmaking is exceptional, as it has to be — it’s a very technically challenging frame to make. And then, they chose the most exquisite timber in the world — Brazilian rosewood.

What are your future plans for Dagmar?

Our priority at the moment is to produce some beautiful pieces from the great designers of the past, under license, with permission from their descendants. In total, we have about sixteen designs in development, including the Clam.

Others include sofas and chairs designed by a Danish architect called Jens Houmøller Klemmensen in the thirties. The first versions were made for the Cabinetmakers’ Guild Exhibition, and the second for a Danish department store called Magasin du Nord, which is still going strong.

There’s another designer, called Sven Ellekaer, who was operating in the fifties and early sixties and is a bit more modernist. There’s a glass coffee table with three legs and a matching stool that fits under it, which is hopefully going to be launched at the end of the year. 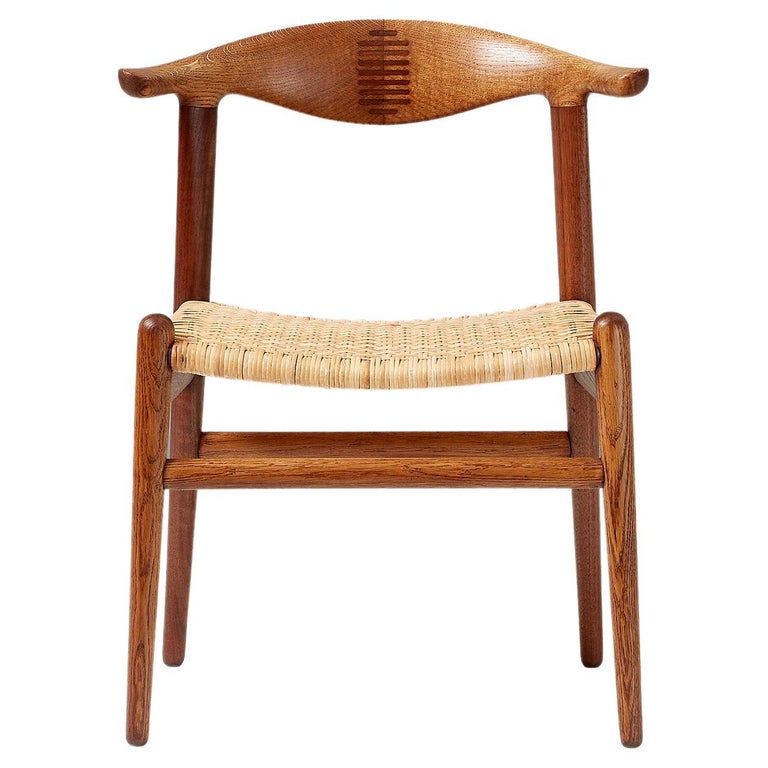 “One of my personal favorites from Wegner’s astonishing oeuvre. The JH-505 continues the progression of form Wegner explores, from his iconic JH-501 Round chair in 1949 through to the rarely seen JH-518 Bull Horn armchair in 1961. This version of the 505 is almost unique, as it features a mixed timber-oak and walnut frame.” 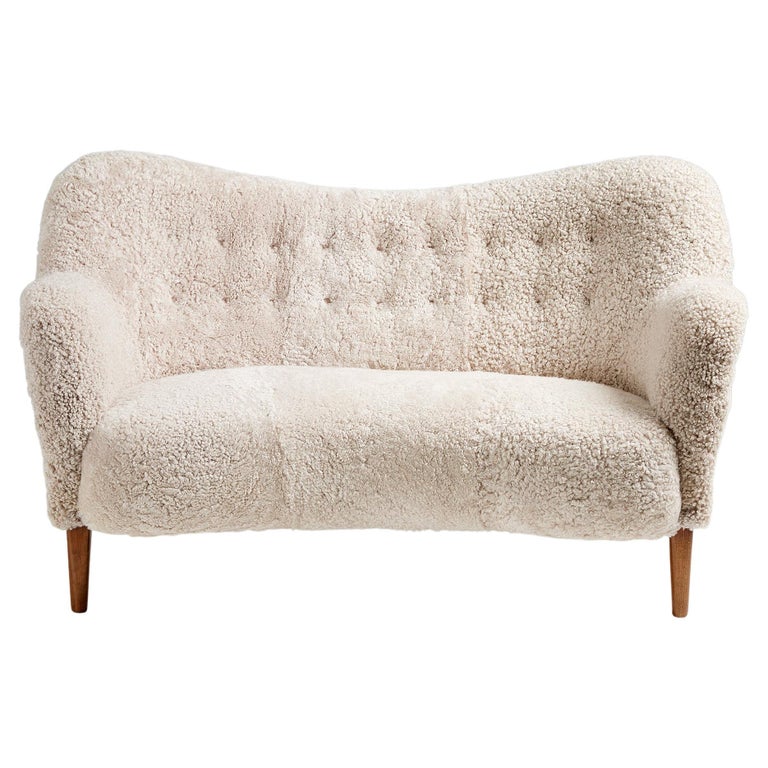 “The 185 sofa has been variously, and incorrectly, attributed to both Finn Juhl and Nanna Ditzel over the years. In truth, like many productions by Slagelse Møbelvaerk, the designer is unknown. It has echoes of both Juhl’s Poet sofa and Carl Malmsten’s Samspel sofa but remains a singularly exceptional example of the favored Danish loveseat.” 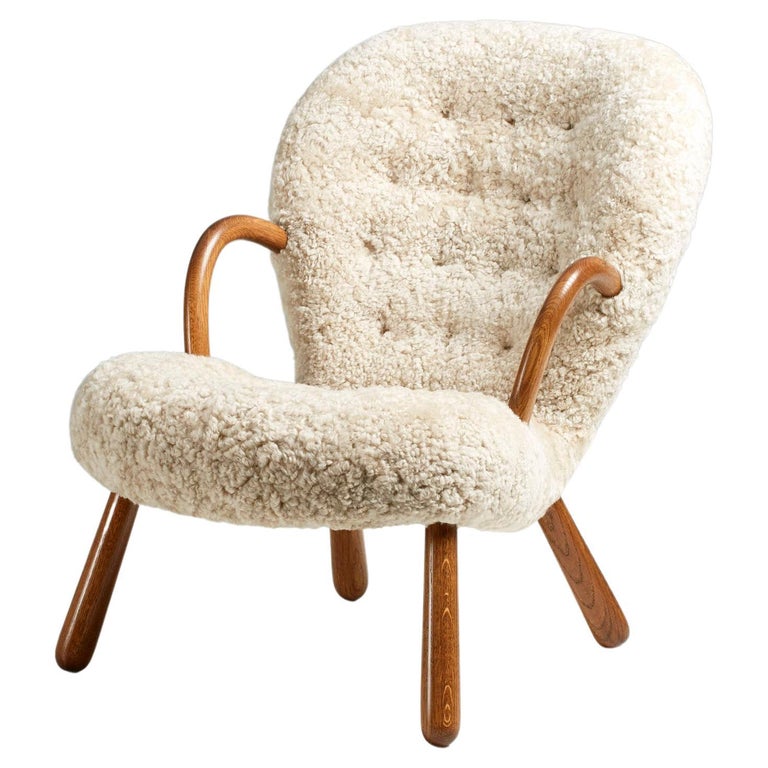 “A true Nordic design icon with a fascinating narrative. Until recently, this Danish design heavyweight was wrongly attributed to Philip Arctander. Exhaustive independent research, with help from the families of Arnold Madsen and Henry Schubell (partners in the Madsen & Schubell company), has corrected the history, and we now know that the much-loved Clam chair was designed in 1944 by Arnold Madsen. Dagmar is proud to have relaunched this design for 2022 in conjunction with Madsen’s estate in a range of different upholstery and wood finishes.” 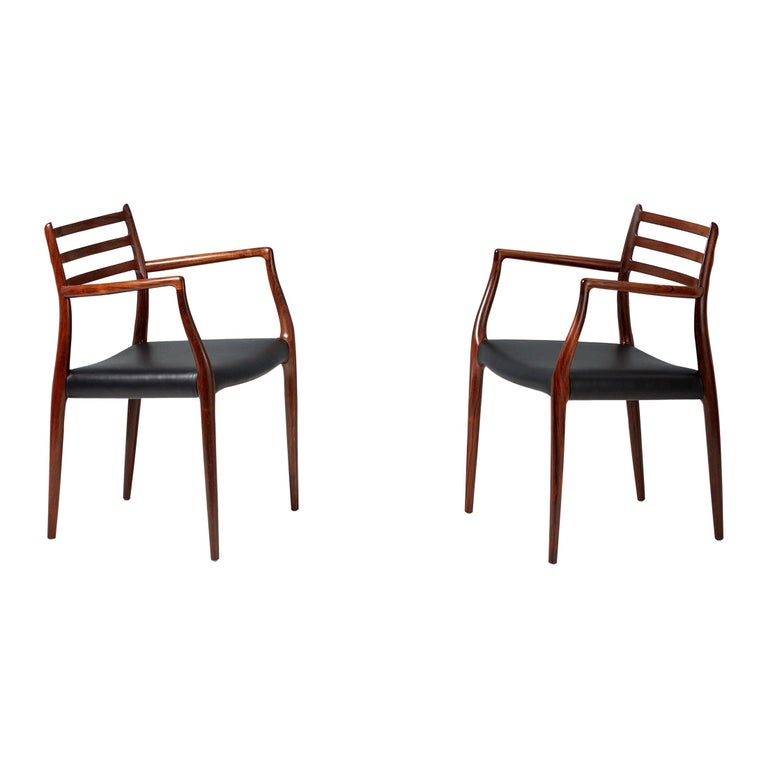 “Niels Otto Møller does not get the respect and adulation he deserves in comparison to better-known names such as Wegner and Juhl, but his career-apex Model 62 armchair deserves a place among the top-ten chair designs of the Danish modern period. It is a perfect distillation of that aesthetic: refined minimalism manifested in a biomorphic form, executed to the highest standard using the finest materials.” 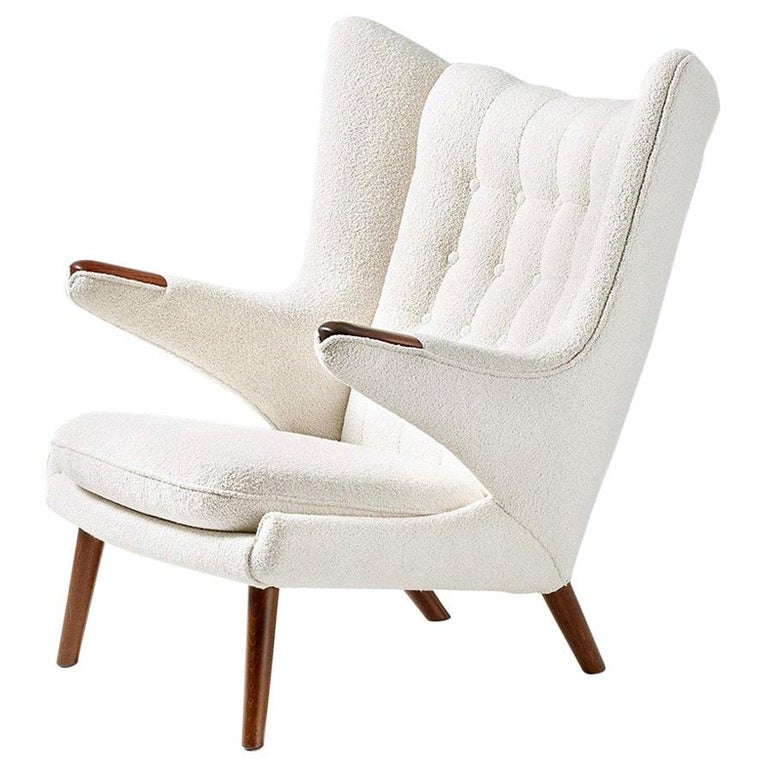 “One of Wegner’s finest works and arguably the most comfortable armchair from the Danish modern period. The appetite for this design remains insatiable to this day. The use of soft, cotton-wool-blend bouclé fabric on this example gives it a contemporary, luxurious twist.” 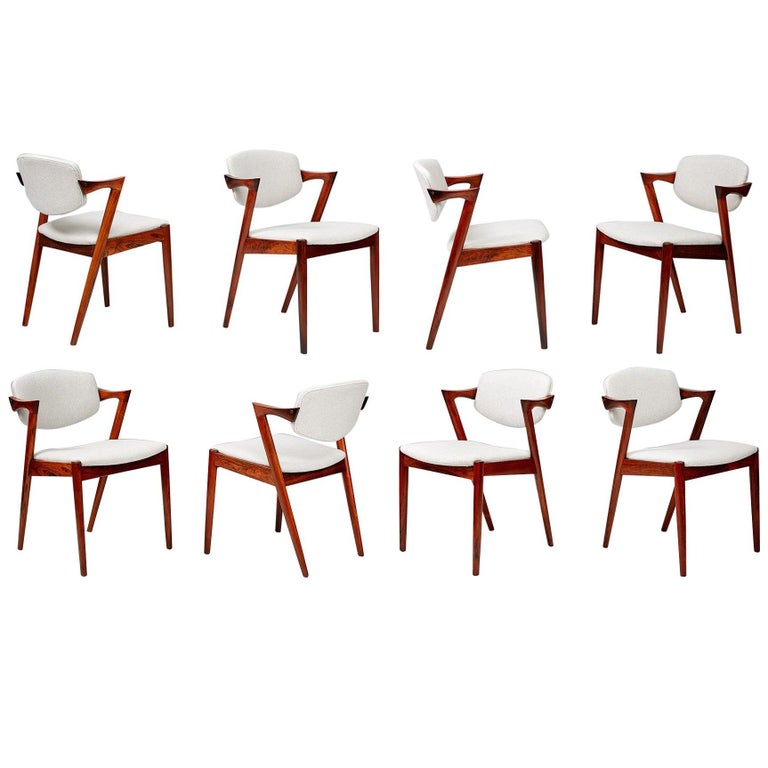 “Kristiansen is from the generation of Danish designers who graduated directly after era-defining protagonists such as Børge Mogensen, Arne Jacobsen and Wegner. The variety and quality of his output over a long and varied career is truly astounding. The 42 dining chair perfectly straddles the postwar period and the more contemporary aesthetic of the late fifties and remains one of the most popular — and comfortable — Danish dining chairs you can find.” 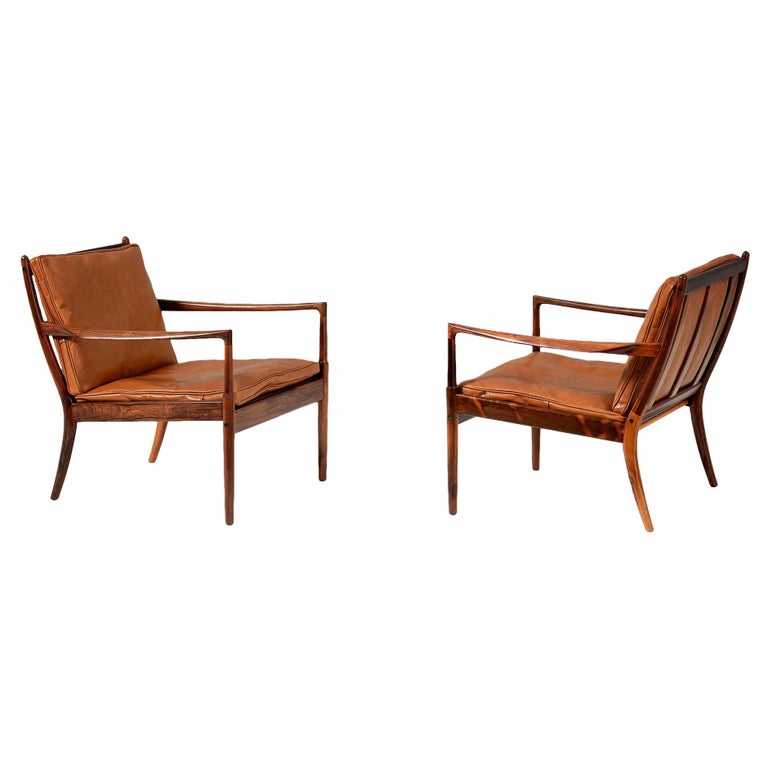 “Kofod-Larsen was a contemporary of Juhl, Wegner and others but has achieved similar levels of recognition only in the past ten or so years. The Samso chair, designed for Swedish cabinetmaker Olof Persson in the late fifties, is for me equal to his finest and most sought-after piece, the Elizabeth chair. These exquisite examples were made from Brazilian rosewood, with loose feather-filled cushions.” 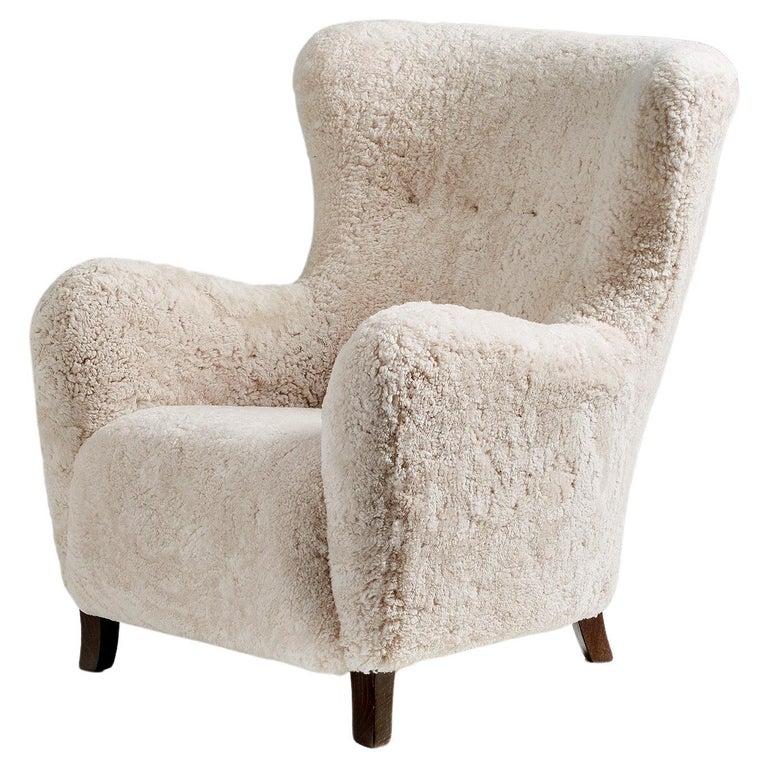 “The Sampo is the jewel of our new range of custom-made upholstered furniture. It draws reference from the period of Nordic design we specialize in while updating elements for contemporary tastes. It has been developed and produced at our workshops in London using the highest quality materials — the frame is made from solid beechwood, the seat is fully sprung, and we use one hundred percent natural fibers for the padding. Each chair is handmade to order in London and available in a range of upholstery and wood finishes.”