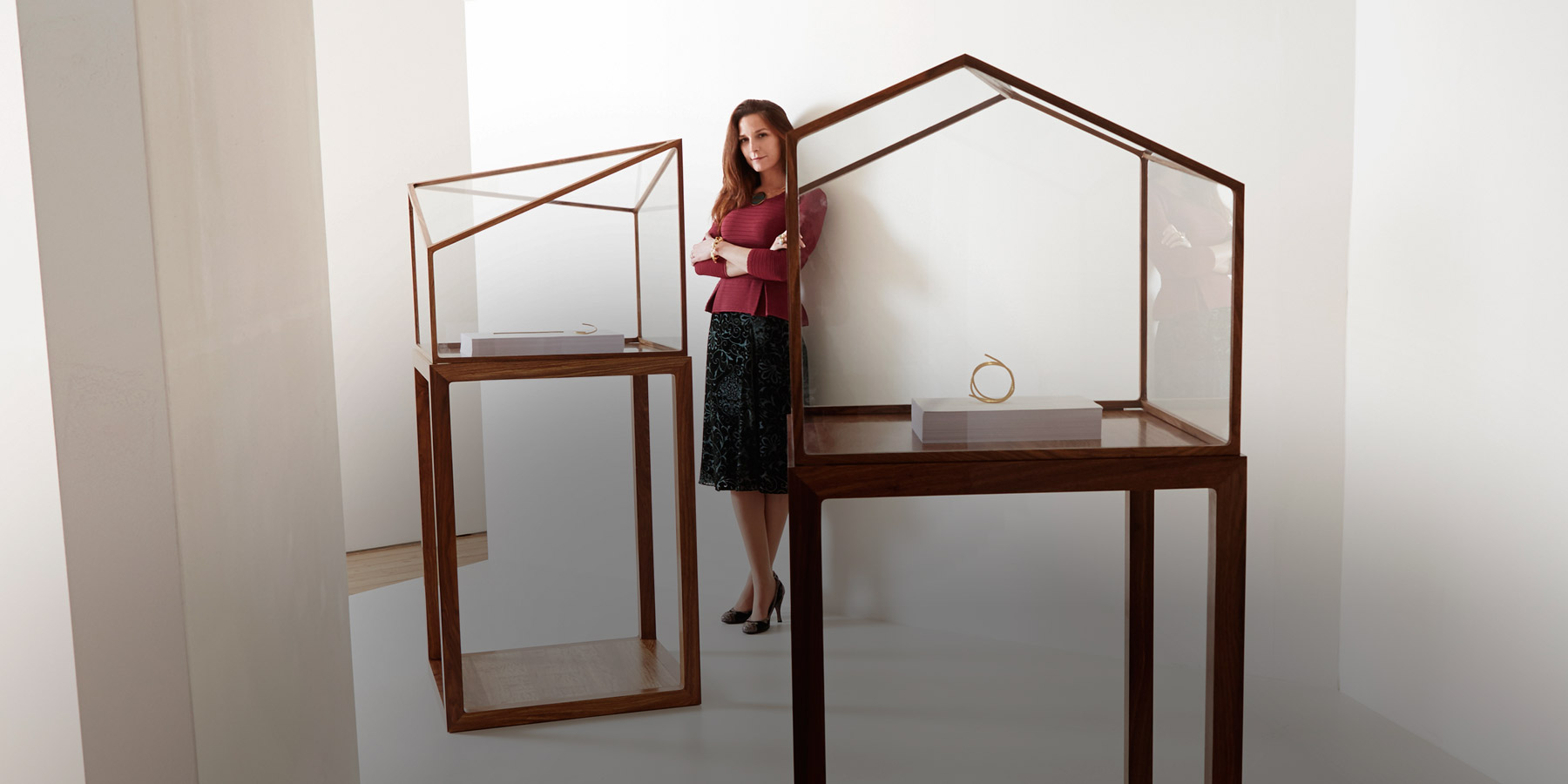 Combining a lifelong love of jewelry with an encyclopedic knowledge of art, this London gallerist shines at dealing contemporary artists' gems. 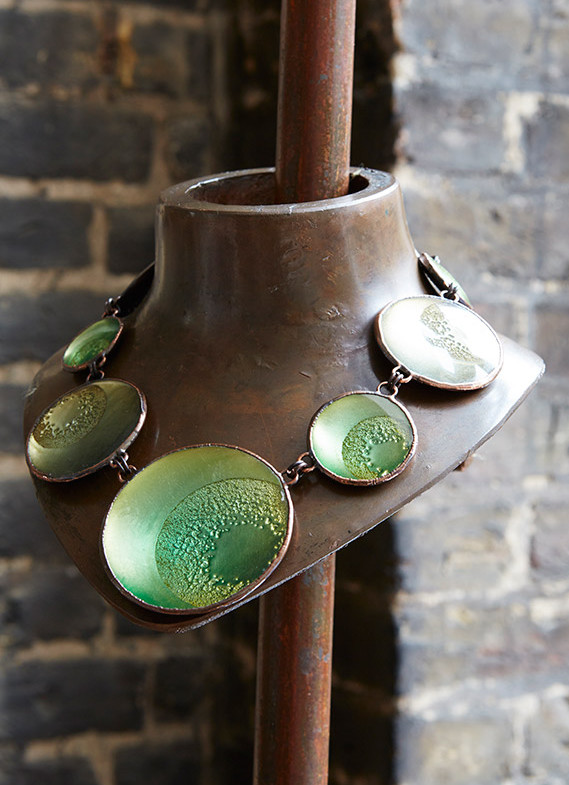 January 25, 2016The name says it all for the London gallery Elisabetta Cipriani: Jewellery by Contemporary Artists, which showcases such artful gems as Giorgio Vigna’s Cosmo Necklace, 2015 (above), made of Murano aquamarine glass, yellow gold leaf and copper granulation. Top: Cipriani stands in her gallery during the recent “Rebar in Gold” exhibition of jewelry by Ai Weiwei.

The first question people ask Elisabetta Cipriani is not about the fantastical jewels she commissions from artists but about her connection to the family famed for Bellinis, restaurants and hotels. I was no exception. She laughed and replied: “None.” This Cipriani isn’t even from Venice — her hometown is Rome. It was there that as a little girl she looked on bewitched while her mother, an antiques dealer, decided what jewels to wear before going out. In her teens, Elisabetta toyed with the idea of being a jewelry designer but in response to the worries of her pragmatic father, she studied art history at university.

She went on to be a curator at Rome’s Museum of Contemporary Art (MACRO). Then, 11 years ago, eager to learn about the commercial side of the art world, she headed to London and the gallery Ben Brown Fine Arts. Her work there focused on the secondary market for such artists as François-Xavier Lalanne and Alighiero Boetti, but fate brought jewelry back into her life, too. Brown’s wife, Louisa Guinness, was then selling artist’s jewels from her husband’s gallery. Because Guinness had young children, she asked if Cipriani could handle her stock when the gallery traveled to fairs. “I liked the concept,” says the sleek yet warm Roman beauty. “I liked learning about artist-designers like Salvador Dalí.” And she responded enthusiastically to the intellectual curiosity and sophistication of people drawn to these miniature works of art. This was her kind of fun.

In 2009, Cipriani, who is married to the London-based contemporary-art dealer Niccolò Sprovieri, left work before the birth of their first child. Selling on the secondary market  was a full time job. She realized she wanted to find something new that would allow her to spend time with the baby. Her decision to start dealing in contemporary artists’ jewelry was born even before their little girl, Domizia, appeared. A shelf in the elegant library of the Sprovieri gallery became her first dealing space. The heavily pregnant Cipriani painted it gray and placed on it her entire stock, which consisted of just three jewels. These were a brooch by Italian sculptor Luciano Fabro, a rare purchase fueled by her admiration for his contributions to the Arte Povera movement, and two pieces commissioned by Cipriani from a wish list of artists with whom she wanted to collaborate: a ring by Japanese sculptor and installation artist Tatsuo Miyajima and a pair of earrings, or “ear hangers,” by Dutch design, art and architecture studio Atelier van Lieshout (AVL). It would have seemed grandiose at the time to say so, but she was launching herself on a new career, one that combined her lifelong love for jewelry, her intense professional and conceptual engagement with contemporary art and an inherited head for business. 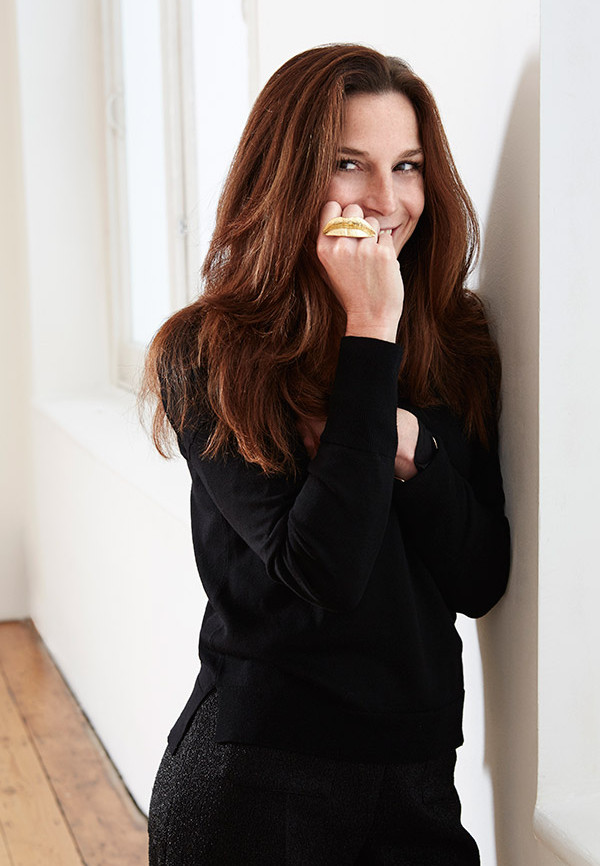 Today the office of Elisabetta Cipriani: Jewellery by Contemporary Artists occupies a spacious room off the Sprovieri gallery, in a quiet lane steps from bustling Regent Street in the West End. Next to her husband’s large, exposed-brick exhibition space, which has the feel of a Tribeca loft, is a room with smooth white walls where Cipriani stages her own shows and displays work by the likes of Tom Sachs and Miguel Barceló. The most recent was of gold jewelry by Ai Weiwei, coinciding with the Chinese artist’s blockbuster retrospective at the Royal Academy of Art, which closed just before Christmas. Almost everything she offers has been commissioned, usually from artists who have never designed jewelry. And the results vary from the elegantly humorous (Dutch artist Jacqueline de Jong’s “Pommes de Jong” gold-plated, sprouted-potato earrings) to the luxuriously menacing (AVL’s bejeweled “Five Pointed Golden Knuckle” that can be used as a weapon in a punch).

Cipriani — whose pieces are among the holdings of the Museum of Arts and Design, in New York, and the Museum of Decorative Arts, in Paris, as well as those of private collectors around the world, both male and female — recently spoke to Introspective about the gallery and its artistic collaborations.

How did all this happen in only six years?

It began slowly. With my savings I bought those first three pieces. The beautiful Fabro pendant sold immediately. Then a museum bought the Miyajima ring. I could see that there was interest. It was exciting. I took the money I made and started inviting artists to make new pieces. Over time, through word of mouth, people began to hear about these imaginative jewels by contemporary artists and keep an eye out for what we would come up with next.

How do you decide which artists you’ll reach out to and propose a collaboration?

I am not concerned with trends. I ask the artist to enter into a dialogue with me. I have to like his or her work, naturally. But also I have to feel that the artist will be inspired to make exceptional jewels. When I asked the collaborative Soviet-born artists Ilya and Emilia Kabakov if they’d like to make a piece, they were inspired to get out his unrealized design for a jewel — a birthday gift for Emilia 13 years ago. It remained in a drawer until this request. Happily, the Kabakovs had by then met Masriera, a masterful Barcelona goldsmith-enameler capable of realizing the design in three dimensions. Now, the design’s flies and foliage, superbly crafted in gold, gems and translucent enamel, grace a brooch, earrings and a ring — the only jewels the Kabakovs have designed. Always it is passion and intuition that guide me. 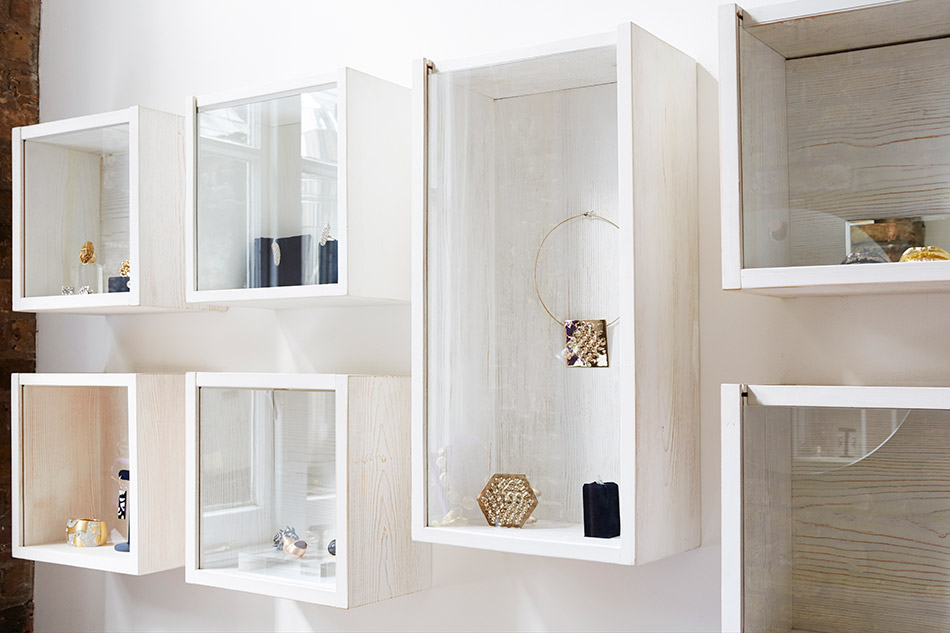 The designs for many of Cipriani’s collaborations start with a sketch before being produced by the artists themselves or specialized goldsmiths. Commissions by Carla Accardi, Rebecca Horn, Pol Bury and Erwin Wurm are displayed in the gallery. 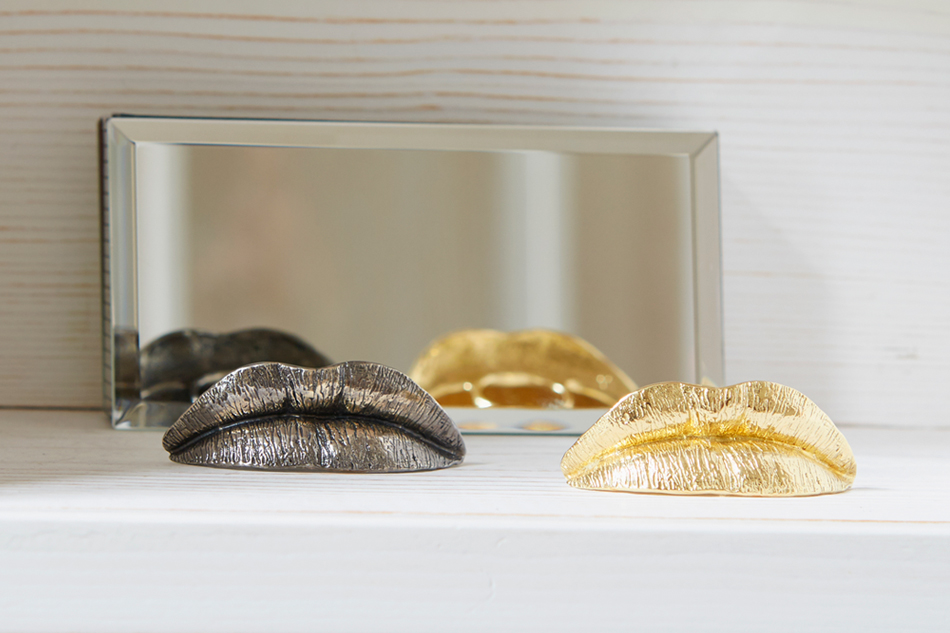 Cipriani collaborated with Kounellis to re-create his 1972 gold lips sculpture as a ring. Labbra, 2012, is cast from the artist’s own lips. 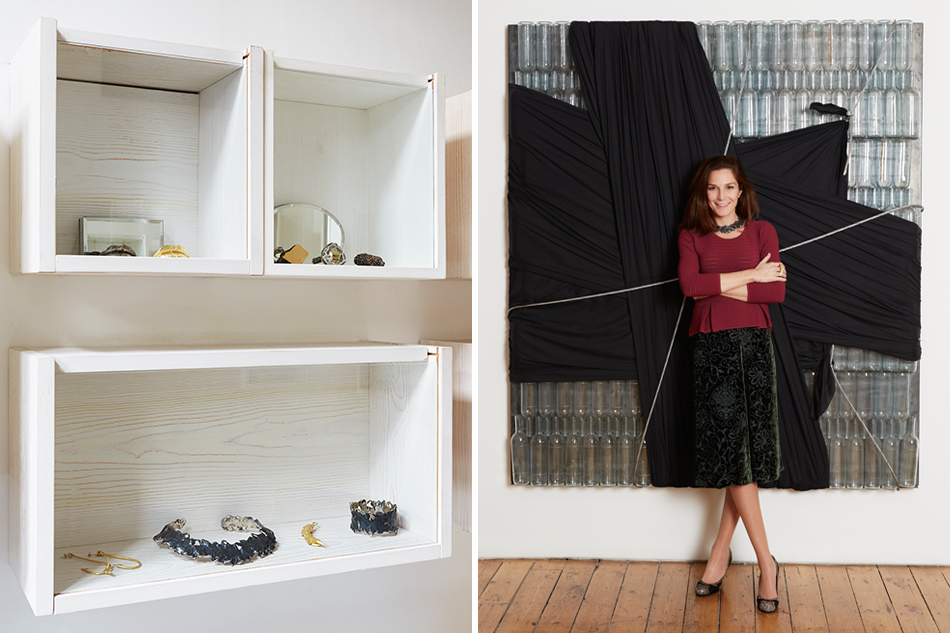 “I have to like their work, naturally,” Cipriani says of the artists with whom she collaborates. “But also I have to feel that he or she will be inspired to make exceptional jewels.” Left: Works by Miquel Barcelo, Kounellis and Vigna. Right: At Sprovieri, her husband’s art gallery, Cipriani poses with Kounellis’s wall sculpture Untitled, 2010, made of glass bottles, black fabric and steel cable on steel. 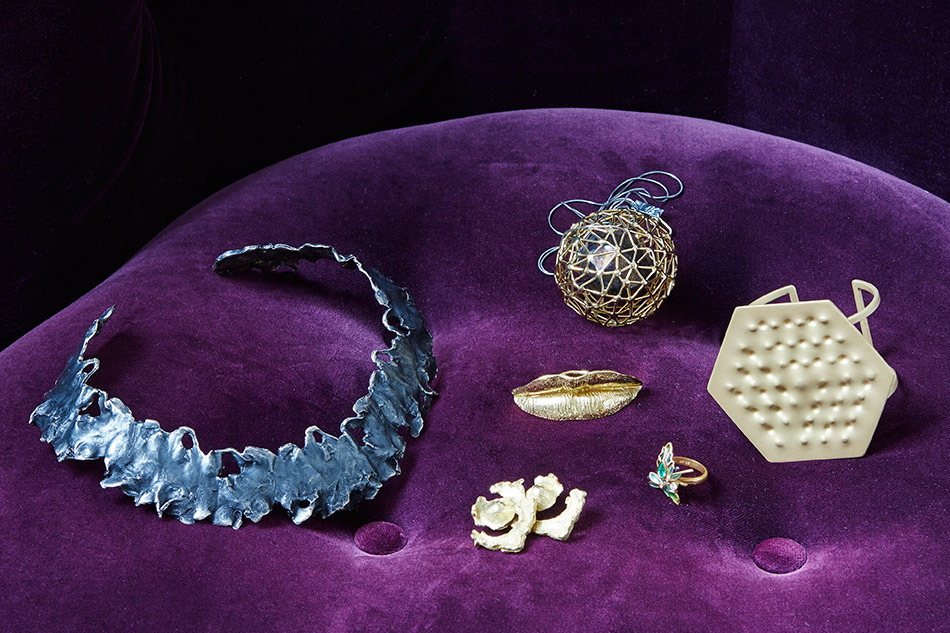 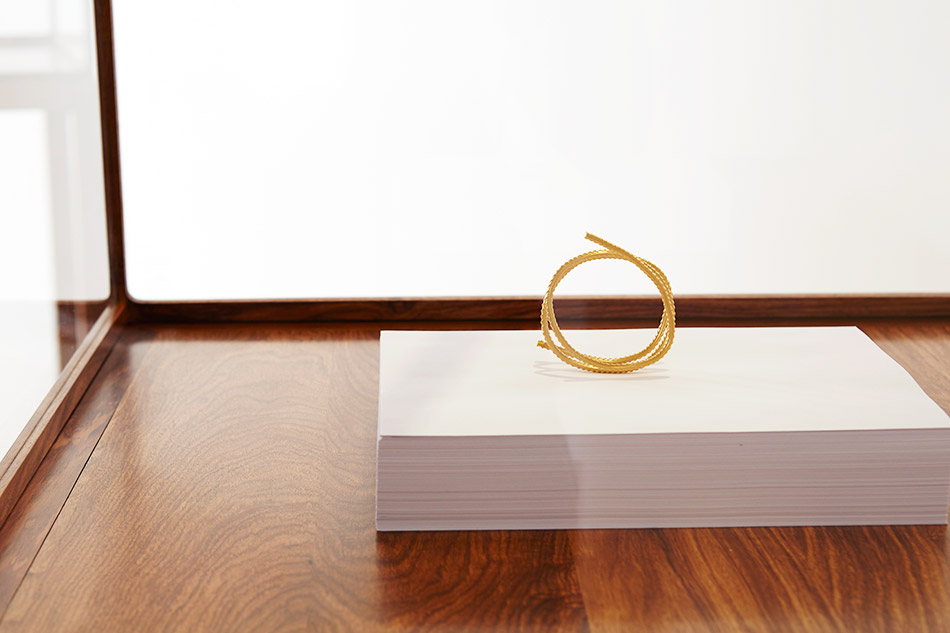 Ai Weiwei’s Rebar in Gold, 2013, serves as a memorial to the lives lost in the 2008 Wenchuan earthquake in China’s Sichuan Province. 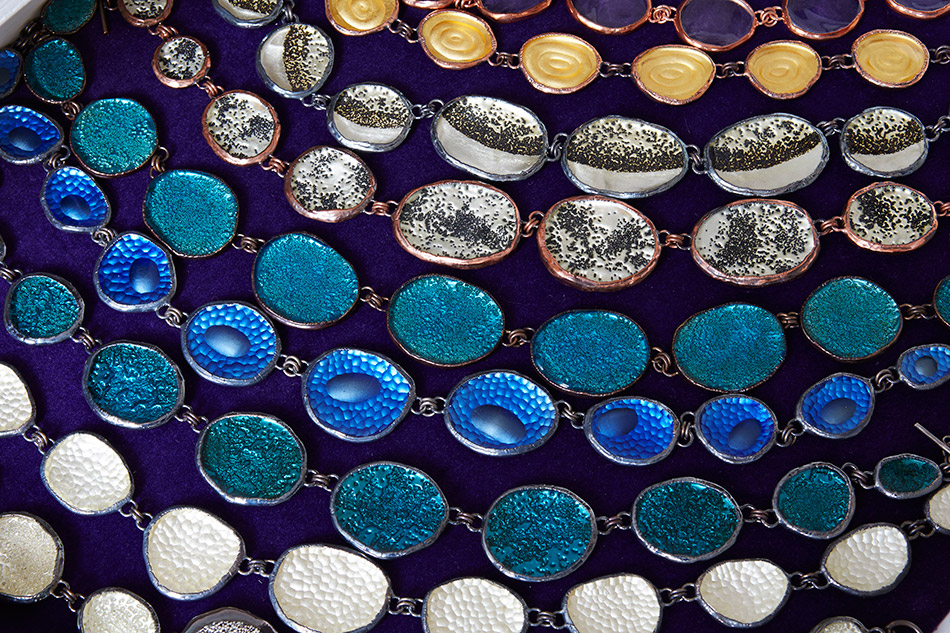 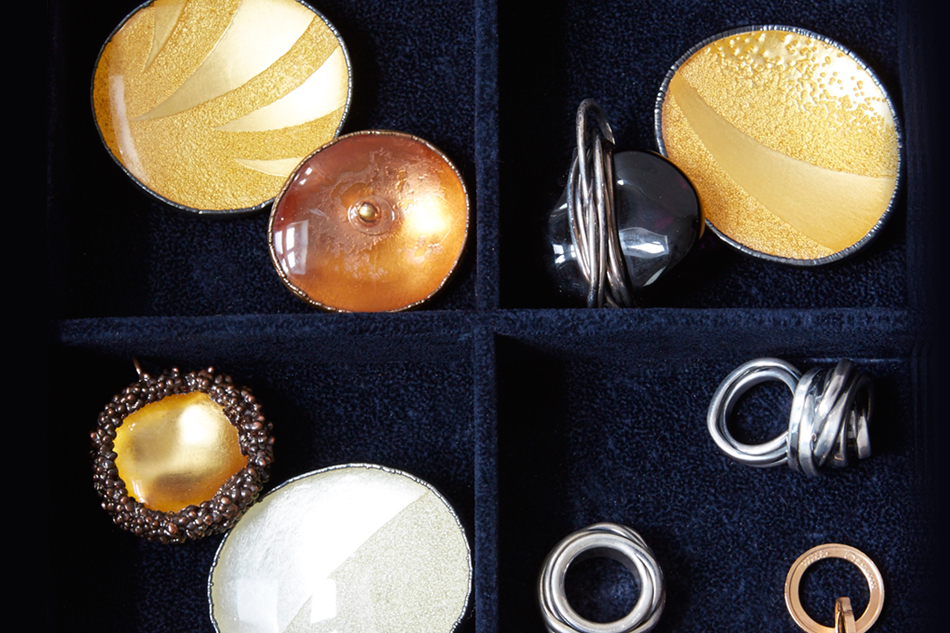 These Vigna pendants consist of sculpted Murano glass and white or yellow gold leaf, and some have copper or oxidized silver granulation on the back. His rings (lower right) have silver threads around the bands. 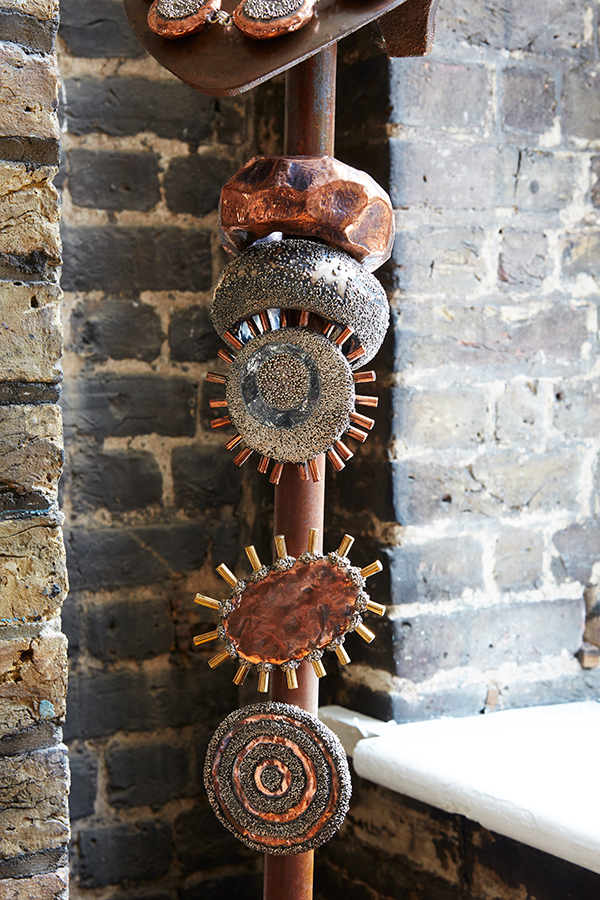 Vigna brooches are made with strong magnets instead of pins.

Do artists jump at the chance to design jewels?

No. When I approach them, most artists refuse. But when they start thinking about it, most cannot resist the challenge. They know it will be difficult, that great precision is needed to work on a smaller scale. But when they do it, they enjoy working on something that one day will be worn. And they are doubly rewarded for their efforts, because this radical departure from their usual practice not only results in the creation of a jewel, but the thinking and effort that goes into it flows back into their art. And for me. there is pleasure too. When I see someone wearing my project, it makes me feel very happy

There are only a handful of dealers in this field, and you are one of the few dealing almost exclusively in new creations. What advice do you have for people who want to learn more about it?

I would start with the book From Picasso to Koons, the Artist as Jeweller, by Diane Venet. She is a French collector and curator of an ongoing international touring exhibition, which includes some of my projects. It will open in Paris at the Museum of Decorative Arts next year. Her enthusiasm and exhibitions have surely contributed to the growing interest in these objects. In the past 10 years, the market has gone from lukewarm to very hot, and it has not peaked.

Elisabetta Cipriani shares her thoughts on a few choice pieces. 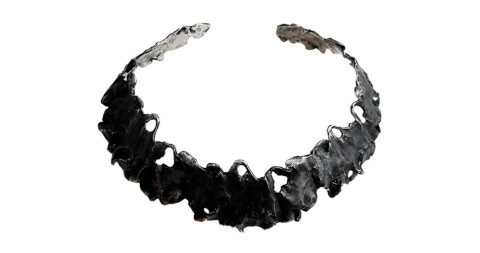 “To prepare for this piece in oxidized silver, the artist did trial runs using a variety of easily worked materials — aluminum foil, cardboard and pieces of wax he shaped with his hand. Impressions of his fingerprints are reproduced in the piece.” 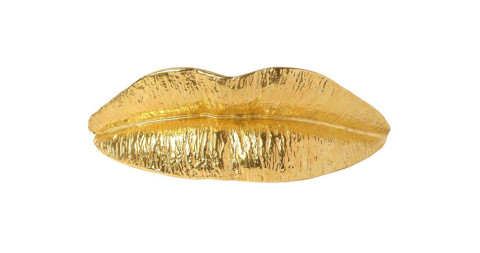 “The artist’s 1972 sculpture of his lips cast in gold was stolen in the 1980s. Here he has chosen to re-create the piece, but now as wearable art — an 18-karat gold ring, reminiscent of ancient Greek masks.” 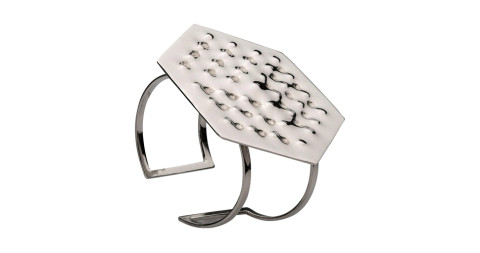 “Designed using a hammer and chisel, this white-gold necklace is part of an ongoing series the artist began in the late 1950s. It evinces a strong interplay between shadow and light.” 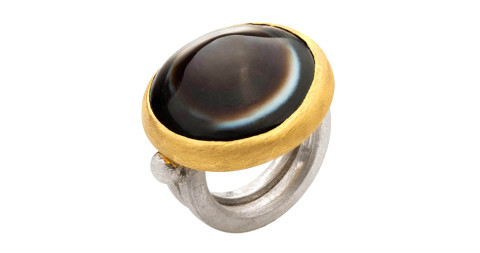 “This sensual ring is made of 22-carat gold, silver and ancient agate sourced by Luisa del Valle, a noted Spanish goldsmith. It is a unique piece.” 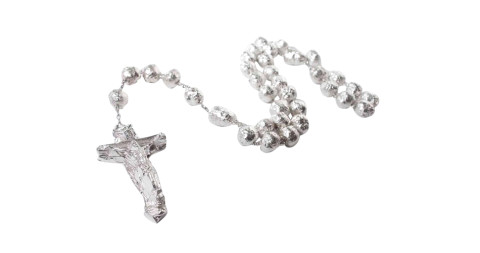 “This silver rosary (2011), is worn as a necklace. Instead of beads, the artist uses casts of nipples taken from a live model. It evokes the feminine symbolism of the rosary.”