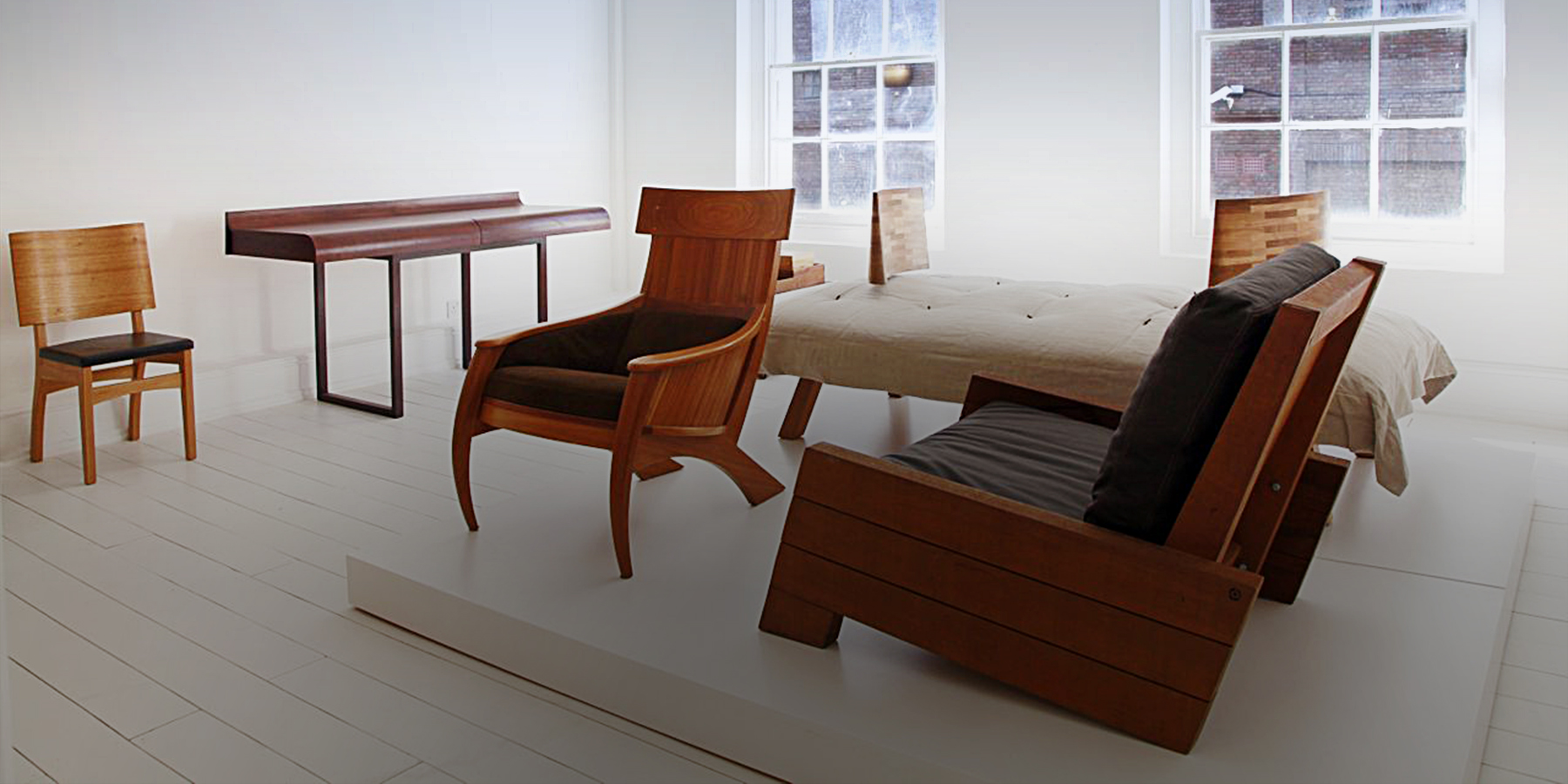 A new outpost of the New York–based gallery ESPASSO brings the best and brightest of Brazil's modern and contemporary designs to the British capital. 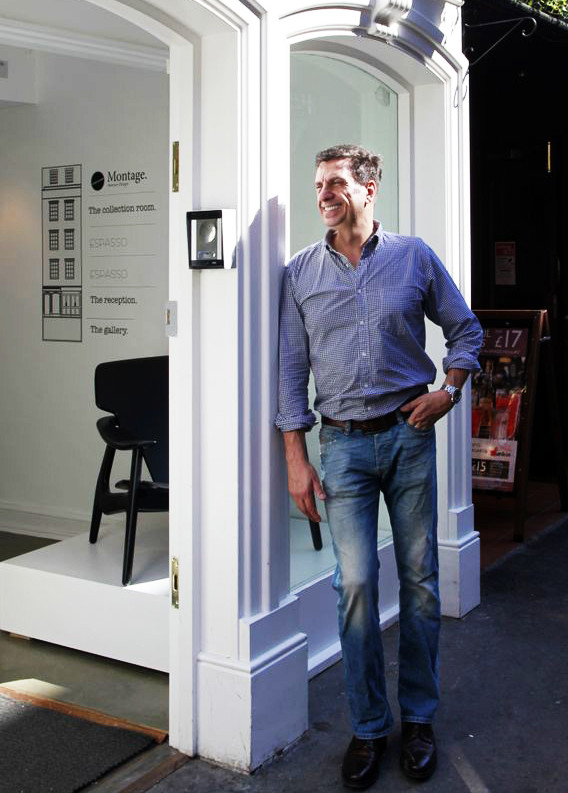 January 23, 2013“I decided there was a niche, an opportunity to present Brazilian design, which nobody knew ten years ago,” says Carlos Junqueira, here outside the new London outpost of his New York–based gallery ESPASSO. Top: Located at 19 Greek Street, a recently rising design hub in London’s Soho, the gallery’s British incarnation showcases a variety of pieces by top Brazilian creatives, including two chairs by Carlos Motta. All photos courtesy of ESPASSO

If you tell Carlos Junqueira offhandedly that you love Brazil, he has a joking response at the ready: “You and everybody else.” But don’t misunderstand him: Junqueira — proprietor of the furniture and accessories shop ESPASSO, of New York, Los Angeles and, most recently, London — is happy not only to be dancing to that same samba tune of affection for Brazil, but also to be leading the ever-growing parade in its honor.

It is his homeland, after all. And having invested in the country’s design riches well before it was fashionable, these days he has more in mind than simple boosterism. “Without being pretentious, the idea of this place is to educate people about what Brazil is,” says Junqueira, seated in his 6,000-square-foot Manhattan flagship. “It’s more than soccer and Carnival. There are a lot of aspects that are very interesting and very unknown to a lot of people. The design is unbelievable.”

ESPASSO — Portuguese for “space” — stocks the best Brazilian pieces from the 1930s to the present, and is particularly known for its selection of work by mid-century masters like the pioneering architect Oscar Niemeyer, who died in December at the age of 105. Another favorite is Sérgio Rodriges, the 85-year-old “father of Brazilian furniture,” as Junqueira calls him, and maker of playfully geometric pieces that are represented exclusively by ESPASSO in their own mini-shop within the New York store. But Junqueira also features cutting-edge contemporary pieces by the likes of Carlos Motta, a master of chaises and armchairs; Etel Carmona, best known for housewares and tablewares; and Claudia Moreira Salles, designer of smart seating and tables (and sister of famed film director Walter Salles). 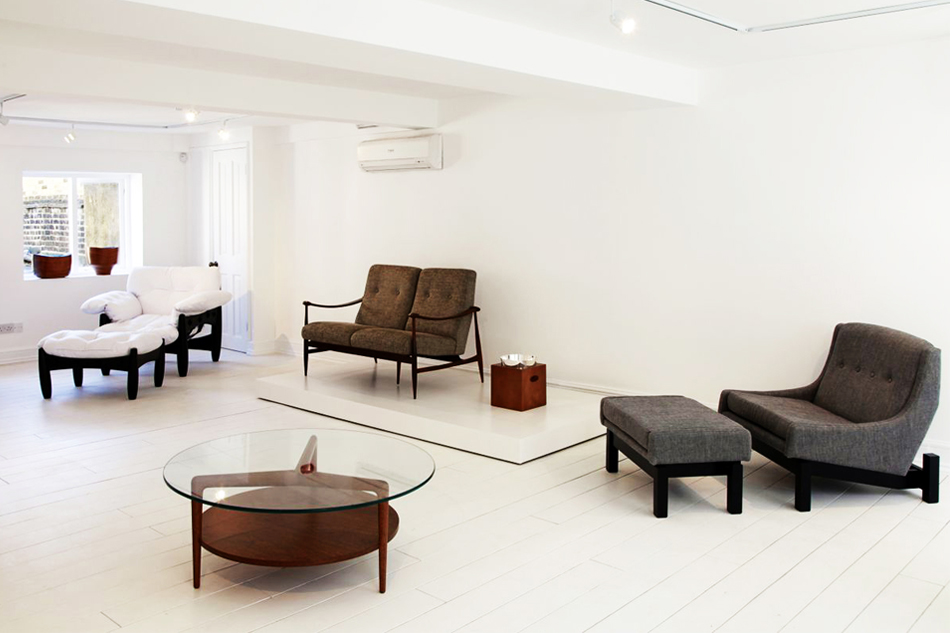 Among the works on display in London are chairs and matching footstools by Sérgio Rodriges, an Aranha table by Branco & Preto, an ice bucket by Isay Weinfeld and a 1960s couch by an unknown maker. 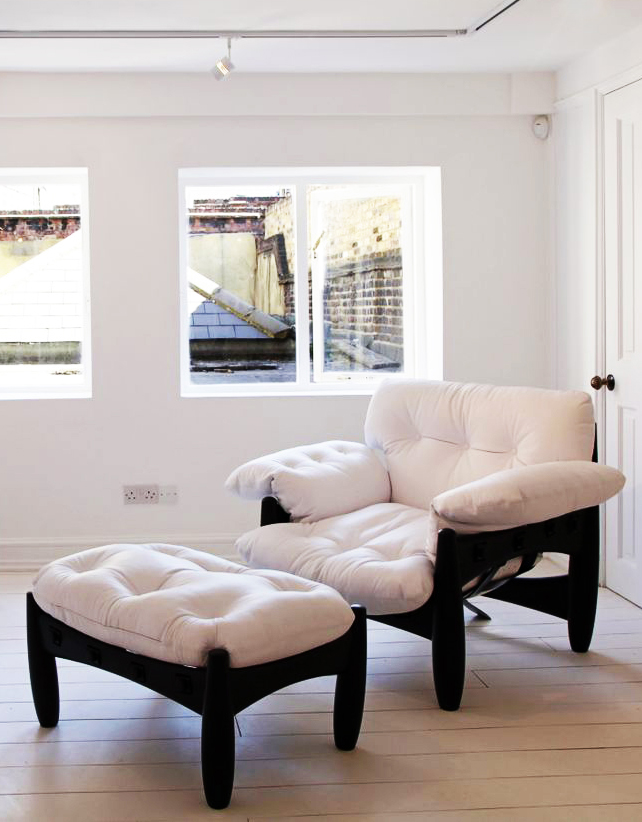 Designed in 1961, the robust Mole armchair is Rodrigues’s signature piece. The Mole, which translates to “soft” in Portuguese, has come to embody the relaxed Brazilian attitude and lifestyle.

Brazilian design has made a name for itself with its ingenious use of lustrous woods, and their glow shines everywhere at ESPASSO. Even the most contemporary-looking pieces directly reference the natural world. “A beautiful tree or a beautiful piece of wood is central to Brazil — everything that is natural and organic,” Junqueira says. “We are very careful about all the woods that we use. They have to be protected, nothing that endangers the forest.” Contemporary designers don’t feel themselves constrained by tradition, of course. “You have very interesting talents that don’t necessarily work with wood,” says Junqueira. “These newcomers embrace plastic, fiber, metal, you name it.”

Junqueira’s passion for craftsmanship both old and new led him in 2002 to open ESPASSO as the first U.S. shop solely dedicated to Brazilian design. Last year he celebrated his tenth year in business. A Los Angeles outpost came in 2004, and in 2006 he moved his New York operation from Long Island City, across the river from Manhattan, to its current location in Tribeca. His entrepreneurial successes came after he tried two other careers, law and coffee importing, after which he “decided there was a niche, an opportunity to present Brazilian design, which nobody knew ten years ago,” he says. “The rest is history.”

Intense interest in his American shops led him to believe that London should be his next city, and last September he opened a 2,000-square-foot showroom there in a quirky old Victorian townhouse in Soho. “The architecture is a nice contrast with all the modern furniture,” he says.

Brazilian design has made a name for itself with its ingenious use of lustrous woods, and their glow shines everywhere at ESPASSO. Even the most contemporary-looking pieces directly reference the natural world. 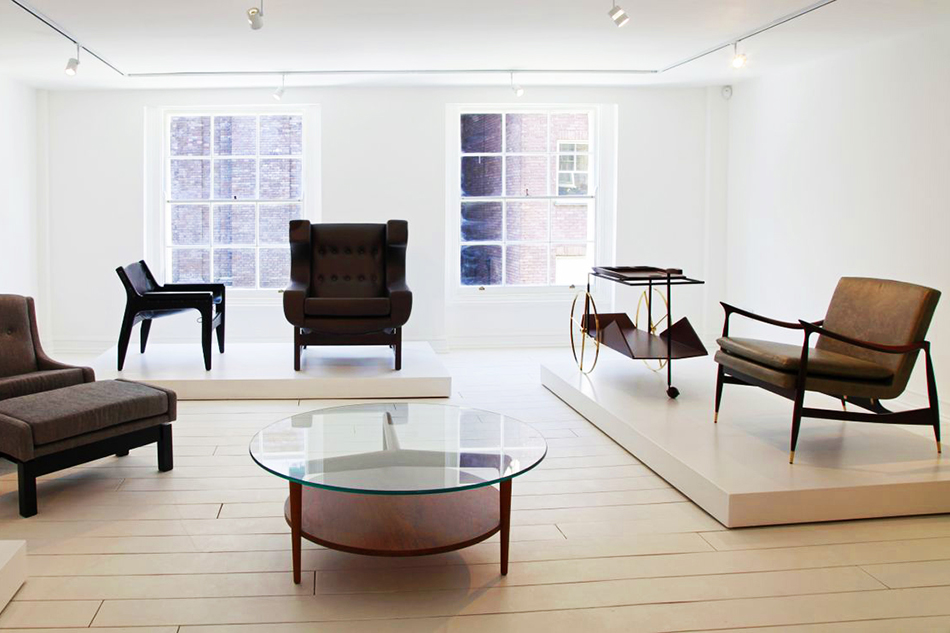 The strong lines and dark woods of Espasso’s furniture stand out against the stripped-down architecture of the London space. 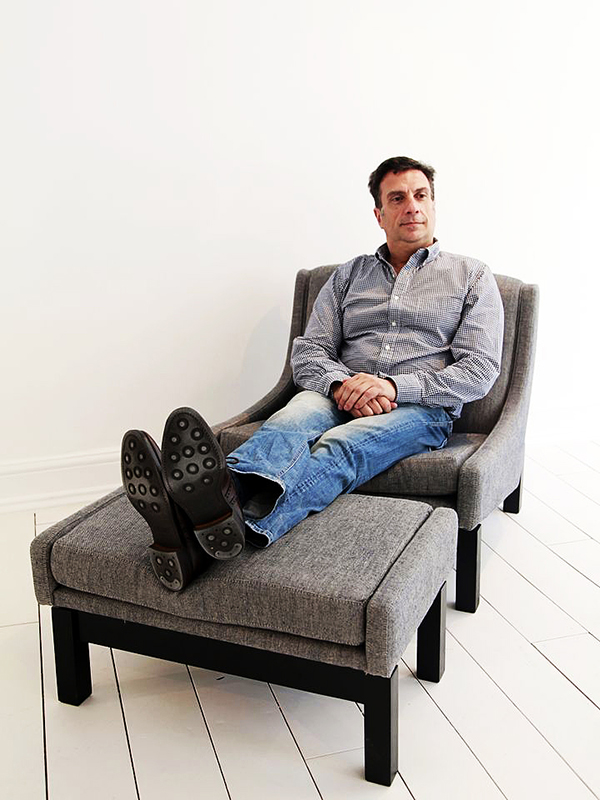 Junqueira’s bread and butter is working with professional decorators and architects, though he says he’s moving toward collectors, particularly with the smaller accessories. “But it’s very difficult for someone to come in here and buy a one-hundred-and-ten-inch-long dining table without having an architect or designer involved in that process, because it’s so big.”

This is a proprietor with a balanced outlook when it comes to online and in-person shopping. In terms of internet wares, his 1stdibs inventory is complemented by the inventory on Espasso.com. That site focuses on decorative pieces and accessories, including some stunning metalwork, like Jacqueline Terpins’s dynamic and Deco-looking Trama TeaPot. Shoppers looking for Valentine’s Day presents will find a lot to love.

But he also feels that sometimes it’s important to experience Brazilian design firsthand, especially when it comes to the larger furniture pieces. With their ingenious construction, comfort and unique appearance, it helps to sit on them, open drawers or stand in front of them. “People need to touch the pieces,” he says, running his hand along the top of a sleek 1950s console with a rich wood grain. “They won’t understand unless they see them.”

Carlos Junqueira shares his thoughts on a few choice pieces. 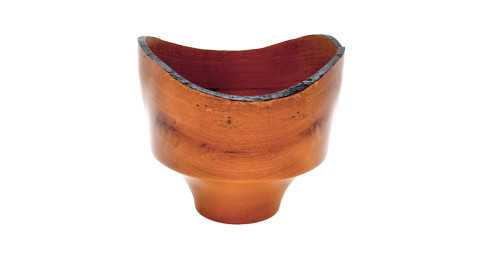 “Characterized by a refined organic quality, Etel Carmona’s Rudá bowl is made from fallen native Brazilian trees. Carmona transforms her favorite raw material into exquisite, one-of-a-kind accessories, taking full advantage of the natural cracks and grains of the wood, which at times she accentuates with decorative stitches of natural fibers.” 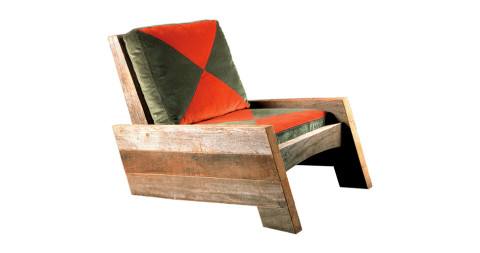 “Carlos Motta’s sharp and rustic Asturias line has been a hit in Brazil and abroad for the last decade. By utilizing reclaimed wood and simple lines that require few machine cuts, Motta designed the Asturias to have minimal environmental impact. Suitable for outdoor or indoor settings, the Asturias line is also available, exclusively at ESPASSO, in reclaimed California Redwood.” 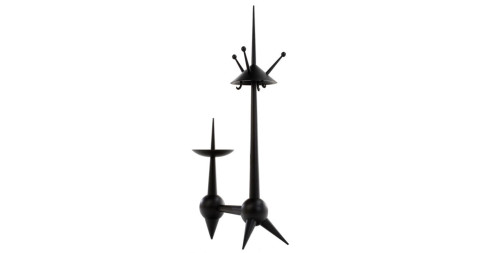 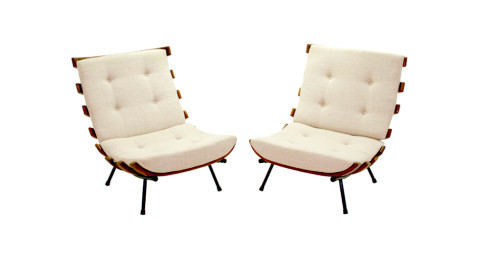 “The Costela has become a much sought-after collector’s item, as the piece’s comfortable and witty shape epitomizes the height of mid-century Brazilian design.” 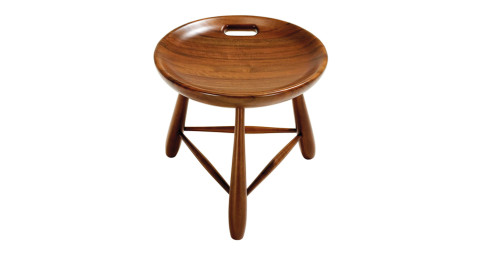 “Designed in 1954 by the masterful Sérgio Rodrigues, the Mocho stool takes aesthetic and functional cues from a traditional cow-milking stool. The Mocho features a seat and legs sculpted out of solid beechwood, shaped in Rodrigues’s signature bulbous form. The Mocho is a playful, simple, yet remarkably elegant piece that complements any interior.” 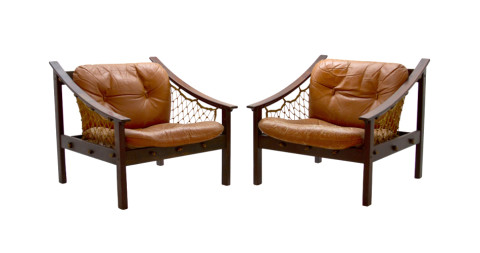