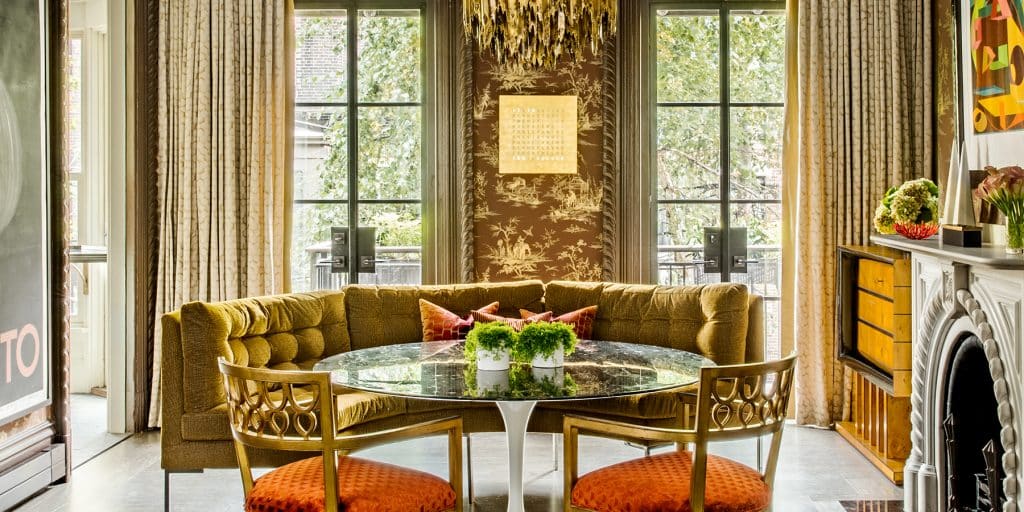 The designers of Evolve Residential reinvented a down-at-the-heels apartment in a late-19th-century building as a decidedly contemporary home. 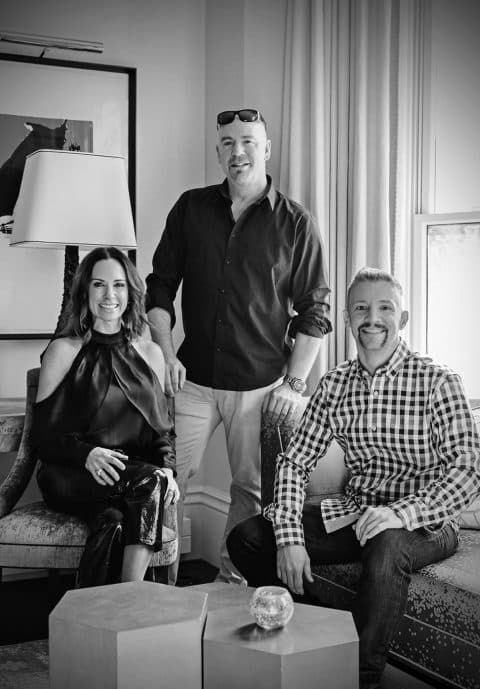 A landmark district listed on the National Register of Historic Places, Boston’s South End is home to the largest collection of Victorian-era row houses in the country. Developers laid it out after the Civil War on former swampland, and today, it possesses an undeniable charm, with its narrow streets lined by stately brick and brownstone facades based on those of London’s finest neighborhoods. The most enchanting of these streets may well be one at the westernmost end of Union Park: a single long block, centered on a gated garden, whose bayed and bow-fronted townhouses command some of the city’s highest prices.

Over the past decade, the Boston design firm Evolve Residential has helped the owners of a triplex in one of these coveted buildings renovate their home, restoring its grand 1868 plasterwork and wood moldings to their former glory, then filling its rooms with a heady mix of Art Deco, modern and contemporary furnishings. 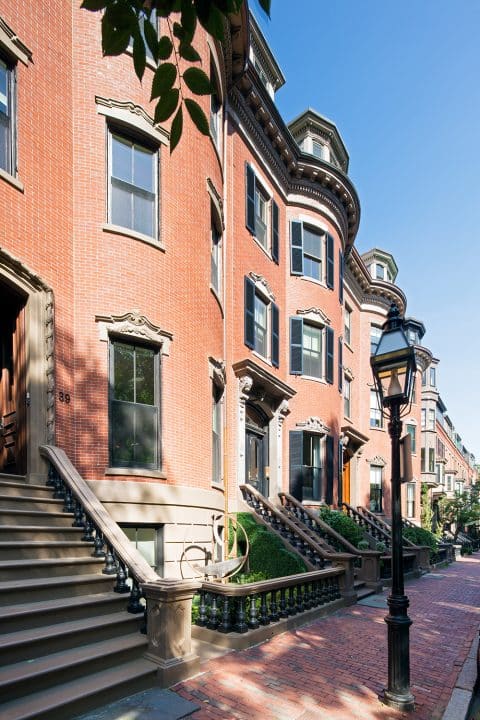 The apartment occupies the parlour, garden and lower levels of a bow-fronted brick row house in Boston’s South End.

The resulting scheme looks as if someone with exquisite taste performed an impeccable renovation in the 1920s, then gloriously maintained it, adding mid-20th-century and 21st-century pieces that in one way or another speak to the building’s 19th-century bones and overarching Deco aesthetic.

“There was a big emphasis on organically combining old and new,” says Evolve principal Josh E. Linder. “The clients love Deco, and they had magnificent accessories and art.”

Linder’s partner in the firm, architect Thomas Henry Egan III, notes that the homeowners’ wanderlust and fascination with a grand style of travel from a bygone era also informed the design. “They would send us pictures of these incredible Edwardian hotels, of the Orient Express train, of historic bars in London and Paris.”

The clients — a couple with a school-age son — also enjoy entertaining. They wanted the house to feel cozy and intimate when it was just the three of them, but also be spacious enough to host large parties without seeming crowded. Here, Linder and Egan take us on a tour, revealing how they gave the owners all they wanted, and more. 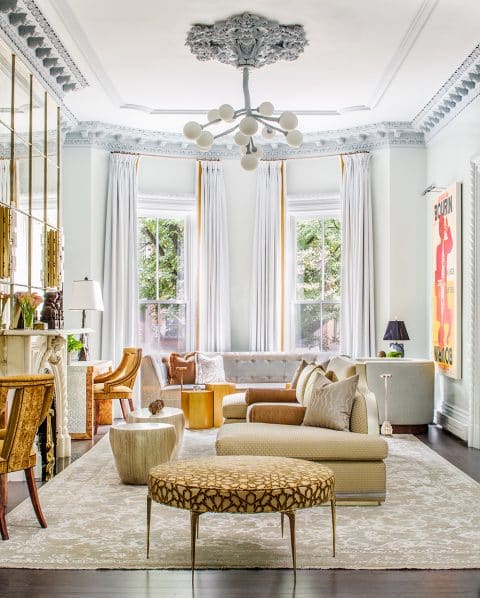 The parlor-level living room had to serve as foyer and office as well as a sitting room with several conversation areas. A major innovation here was the design of the custom, Deco-inspired couch. It serves as a room divider, defining an entry area by the apartment’s front door, and its unique footprint — following the bump-out of the antique-mirror-paneled chimneypiece — lets those sitting on it face people all over the room. From one end, they can speak to guests in the bay’s curving sofa; from the other, they can access an ottoman with stiletto-like legs. Those in the middle can look at the fire across the whalebone-like coffee table. The desks chairs can be turned to provide extra seating during parties. Above it all, a contemporary Bourgeois Bohème Atelier Republique chandelier hangs from a restored plaster ceiling medallion. 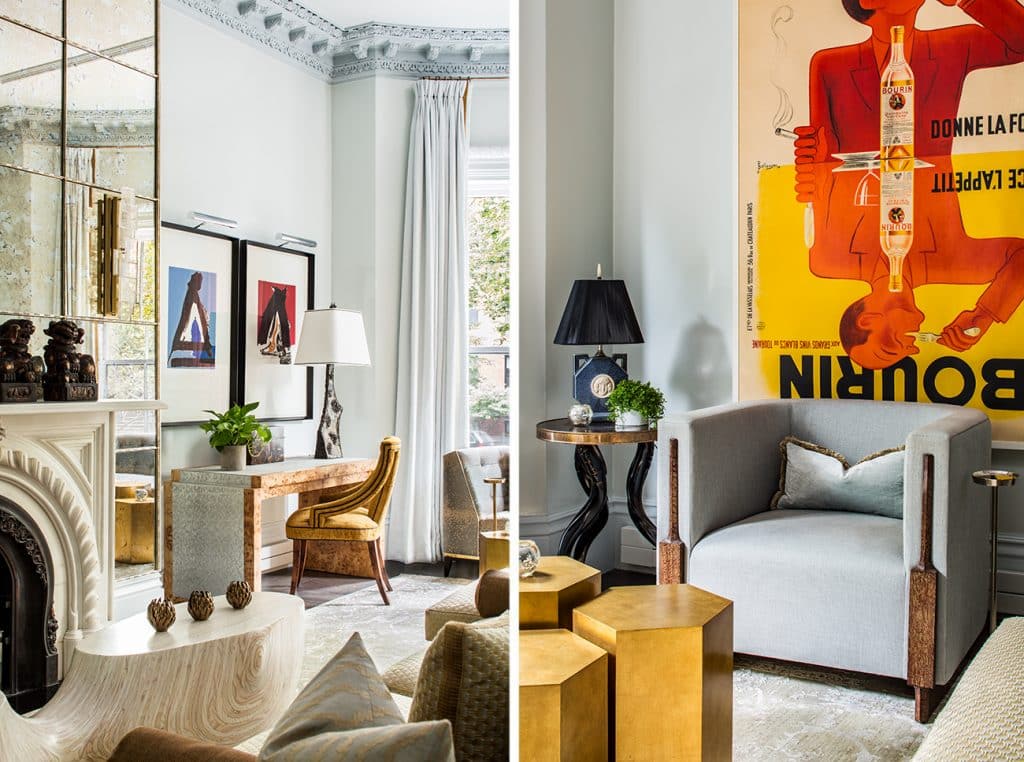 An uncle of one of the clients is a longtime art collector who has bequeathed the family an array of blue-chip works over the years. Numbered Robert Motherwell prints from 1970 — The Basque Suite: No. 7 (blue) and The Basque Suite: Untitled D (red) — are mounted over one of the living room’s two desks, while a 1936 poster by Pierre and Jacques Bellenger advertising Quinquina Bourin liquor is displayed behind a barrel-back lounge chair. 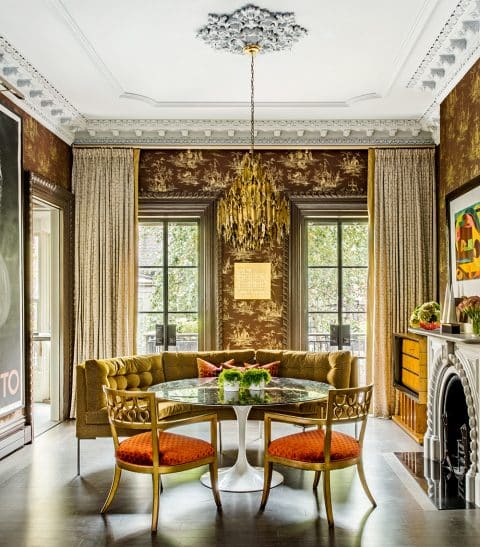 The noir-ish tones of the dining room present a marked contrast to the cool, pale hues of the adjacent living room. “We wanted to play up the drama,” says Linder, “and we wanted the space to feel intimate. It’s a good-size room, especially for the city. The dark color of the trim, moldings and chinoiserie wallpaper give it the moody feeling of a lounge.”

The designers enhanced the architecture here by restoring the highly detailed wooden trims and plasterwork, which, Egan explains “had been worn away from thousands of burst pipes over a hundred fifty years.” The two glass-and-steel doors on the back wall are new, formed by expanding the original windows to open the room to the back deck and a spiral staircase down to the yard below.

Once again, the space had to be multifunctional: breakfast room, setting for family dinners and overflow work area, as well as cocktail and party venue. The table, with a classic Eero Saarinen Tulip base and gold-veined black-marble custom top, works to meet all these needs. The curving bespoke banquette provides cozy seating for small gatherings but is also a perfect perch for extra guests when a group grows in size.

A pair of poplar Biedermeier cabinets flank the fireplace. The designers found them on 1sdibs, offered by antiques dealer Hannau, in Rome, and had them shipped. “They immediately appealed to us because of their bold, modern, monolithic shapes,” explains Egan, “and the storage capacity is fabulous for linens and silver.” Above the marble mantel is Scholes II, 1991, by Al Held. The designers discovered the brutalist Tom Greene torch-cut bronze chandelier on 1stdibs, selecting it for “its layers of organically sculpted dark brass and seemingly melted edges,” says Linder. “The quality of light it casts is mysterious and evocative.” 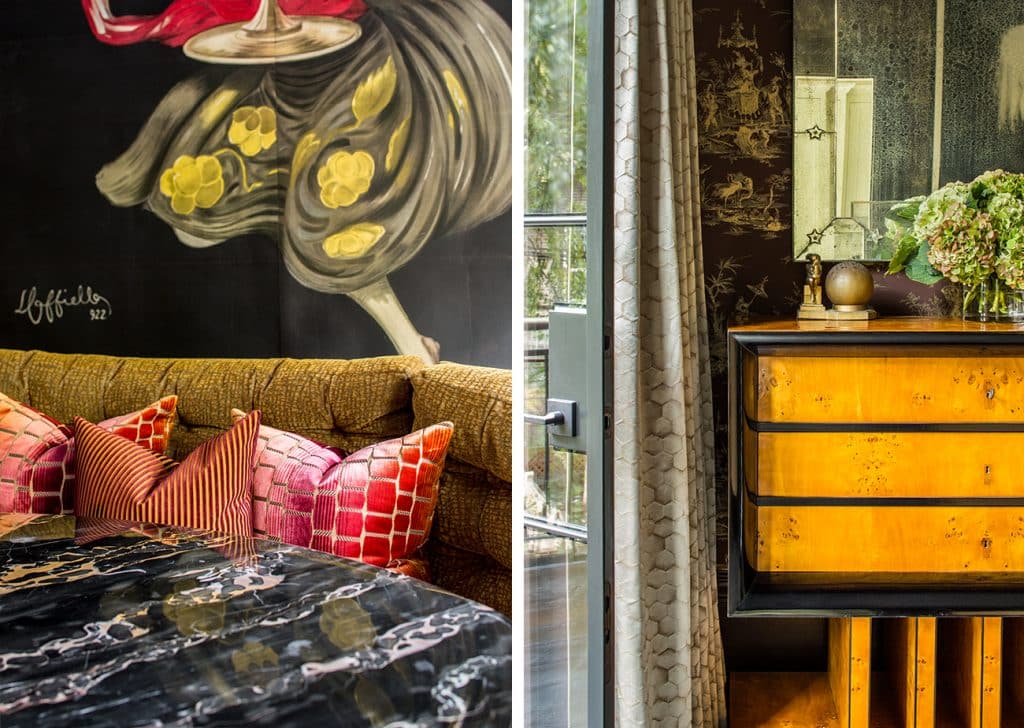 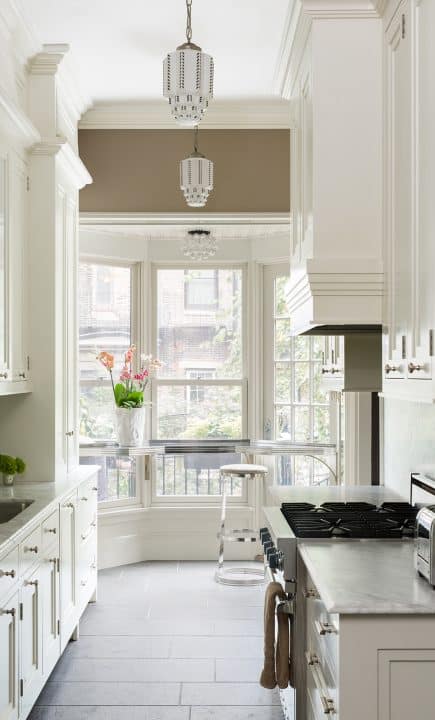 The kitchen was the first space Evolve tackled for the homeowners. Previously a late-20th-century expanse of white laminate and pale wood, it now looks like a contemporary reinterpretation of an Art Deco–era butler’s pantry — albeit one filled with light from a bay of almost floor-to-ceiling windows. The bar-height counter set into the bay is made of pewter, while the flush-mounted Bubble light fixture above is by Helena Tynell for Glashütte Limburg and sourced from Parker’s Mid-Century.

In the main area of the kitchen, cream-colored custom cabinets, with some uppers fronted by period-appropriate milk glass, pair with countertops of Carrara marble. The Streamline Moderne–style Nanz drawer pulls and knobs are silver-plated; the homeowners found the Deco pendant lights themselves.

During the renovation, the designers added a second door to increase circulation between the kitchen and dining room, which also helps the former seem more expansive. “In footprint, it’s not a big room,” says Egan, “but it lives larger than it is.” 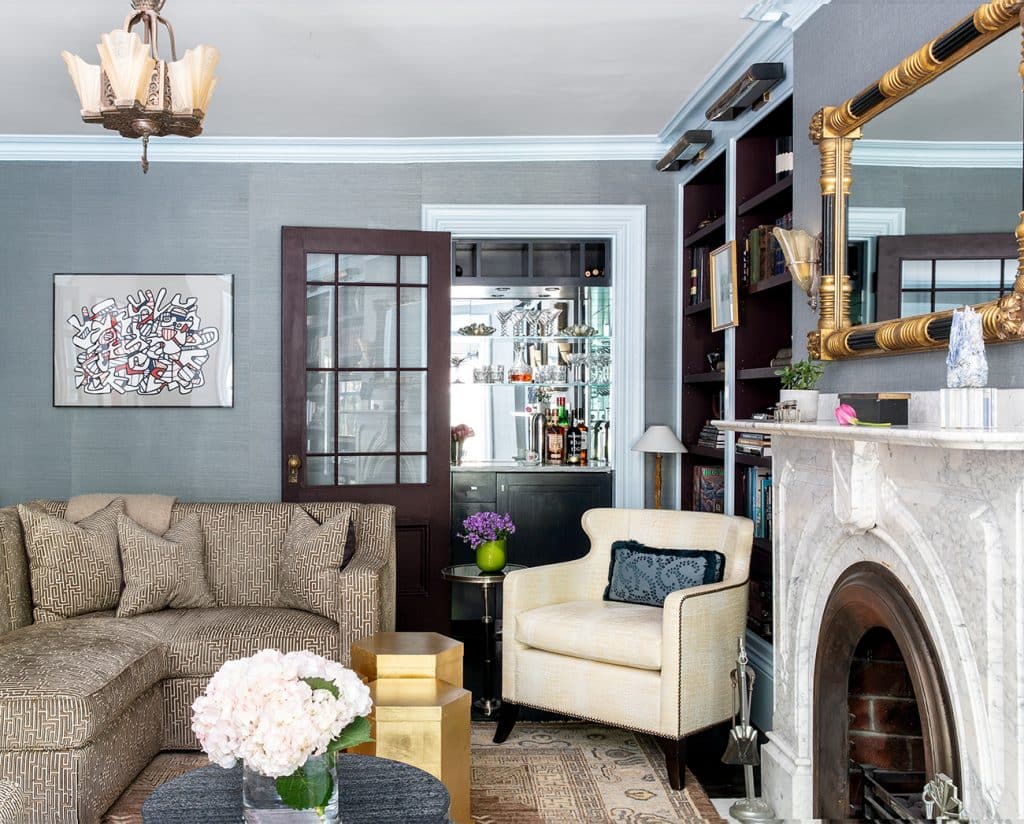 This book-lined space is the primary gathering area on the garden level, one floor down. The former master bedroom, it now serves as library, family room, den and, thanks to the piano in one corner, music room. Warm and inviting, it gets especially heavy use in the cold, dark days of Boston’s long winter. “They call this their Downton Abbey room,” Egan says. A custom corner sofa and lounge chair face a gold-toned Kravet coffee table in front of the fireplace. On the back wall is Organisme, a Jean Dubuffet print from 1974. 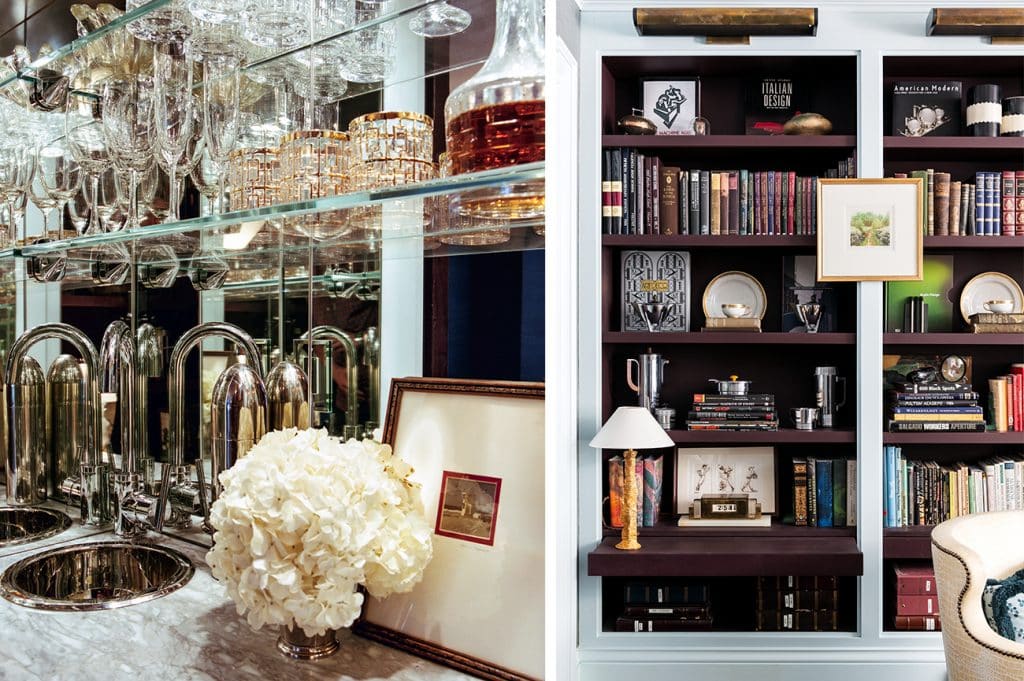 The designers carved the wet bar out of one of the bedroom’s two closets (the other was integrated into the new master suite, on the other side of the library’s rear wall), finding the tiniest sink to sit on one side of the countertop. Floor-to-ceiling built-in shelves leave plenty of space for displaying the clients’ books and various Deco collections. The table lamp is from Charles Spada Antiques. 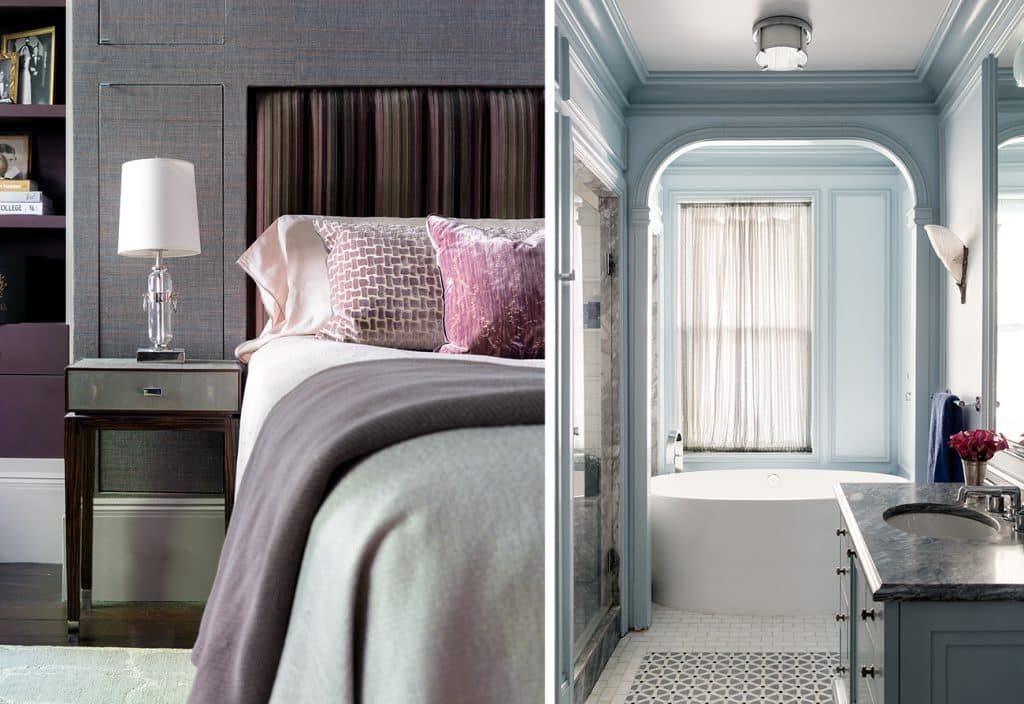 A master suite now occupies the rear half of the garden level. Its anteroom connects a hallway to the bath and bedroom through a pair of doors. This provides the sleeping quarters with privacy even during parties, when the bathroom (normally en suite, shut off from the hallway by a door) is used by guests. In the bedroom, a custom upholstered headboard is recessed into a grasscloth-covered wall, which conceals storage behind semi-hidden doors and is flanked by an added expanse of bookshelves. Beside the bed, a crystal and polished nickel lamp sits atop a Lillian August side table.

Previously, the garden level bathroom “was the ugliest nineteen eighties space, with a fiberglass shower insert,” Egan recalls. “We redesigned it to look like it was from 1915.” Adds Linder, “We took the idea of a much grander bathroom and just shrunk it down.” That meant making the most of every inch, sourcing the smallest soaking tub on the market, from Victoria & Albert, for example, and using a petite alcove to suggest a private water closet. The rich moldings, newly added, echo the spirit of the original millwork upstairs but at a scale that is appropriate to the space at hand. The designers painted it all, walls and trim, a uniform shade — Benjamin Moore’s Sweet Bluette  — the better to showcase the statement-making Thassos- and Bardiglio-marble mosaic floor.

Get the look with items hand-picked by Evolve Residential designers 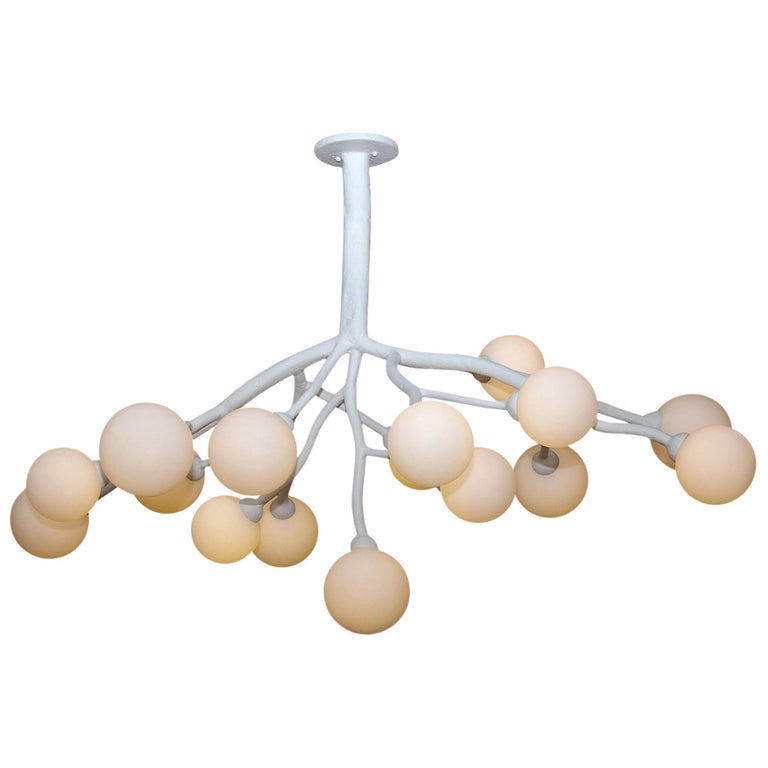 “We absolutely adore this spectacular chandelier!” says Egan. “The existing eighteen fifties ornamental plaster crown moldings and ceiling medallion have an acanthus-leaf motif, so we sought a light fixture with an organic design. We painted the plaster stems in the same icy blue as the walls, and the glass globe lights are like ripe fruit.” 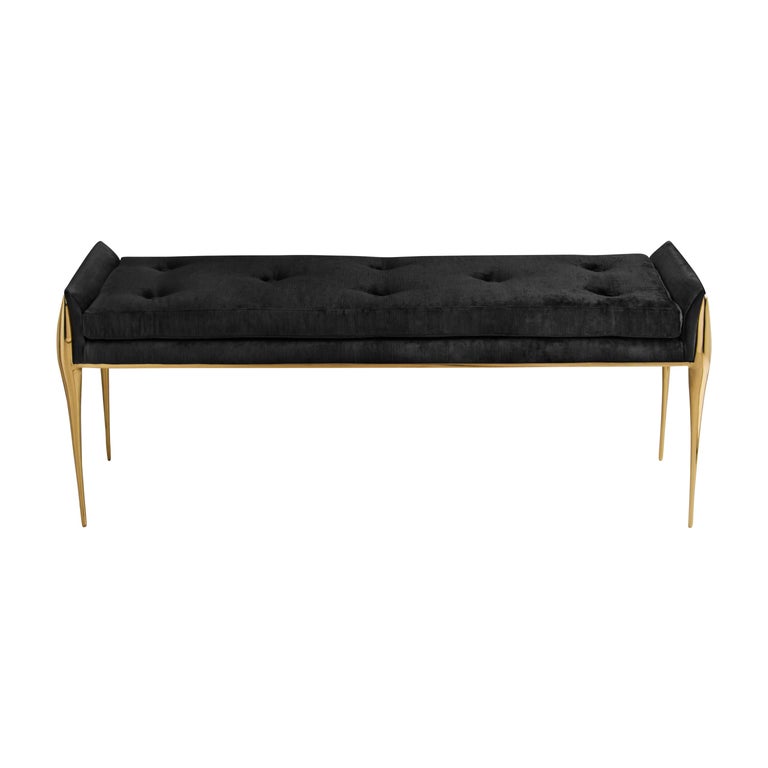 “Beautiful and well-crafted, just like the ottoman in the living room,” says Linder. “We love how both pieces command attention on sexy stiletto legs.” 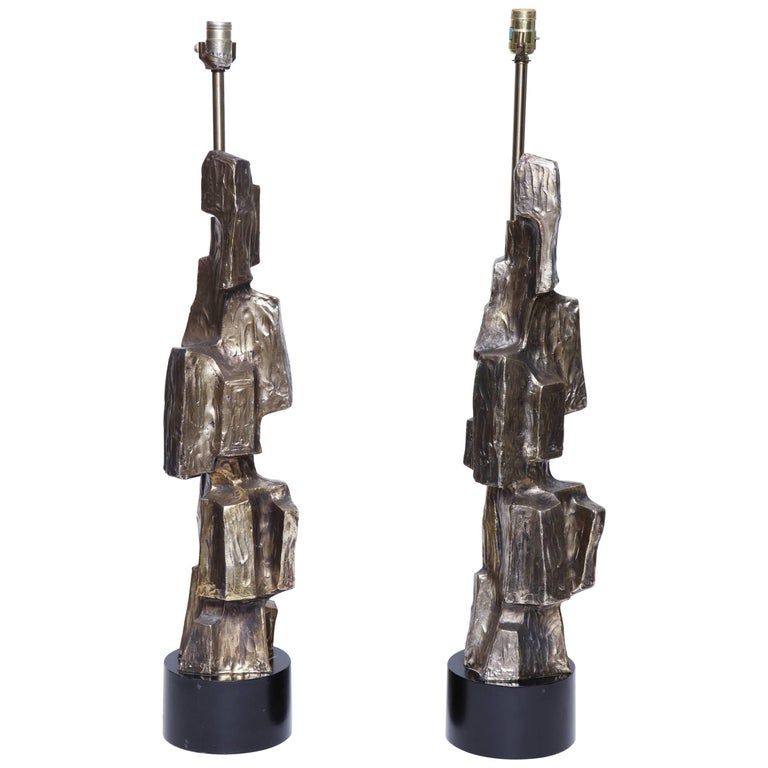 “This pair of forged-steel lamps exude the sculptural, dramatic flair of late-mid-century brutalism,” says Linder. “Similar to a pair we used in the living room, the fixtures have a hand-wrought surface that appears both organic and space age.” 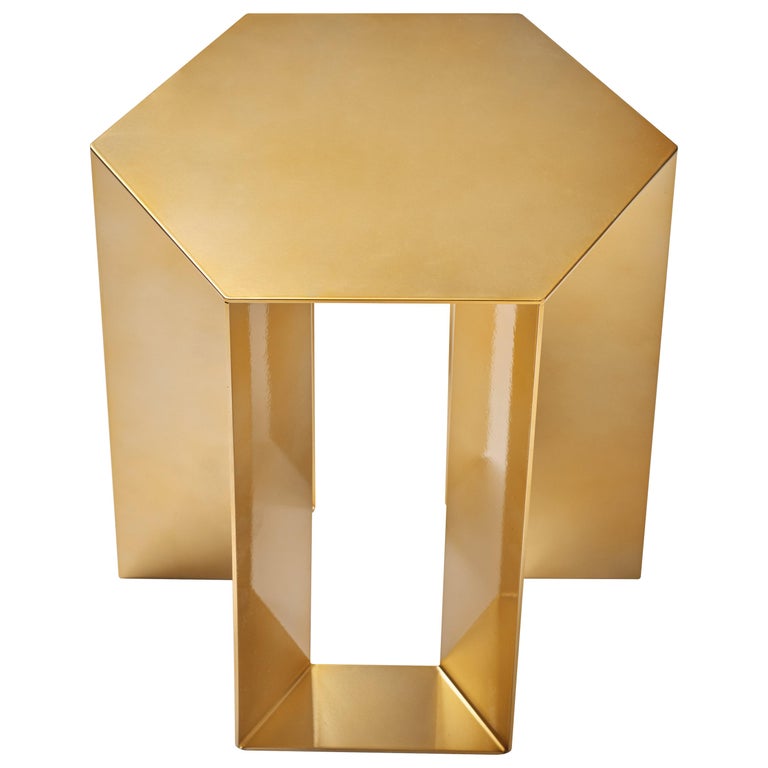 “Every room benefits from an object or surface finished in matte gold, to reflect shimmering sunlight,” says Egan, referring to this side table, which resembles those clustered in the library. “The faceted geometry of these low hexagonal tables is especially appealing.” 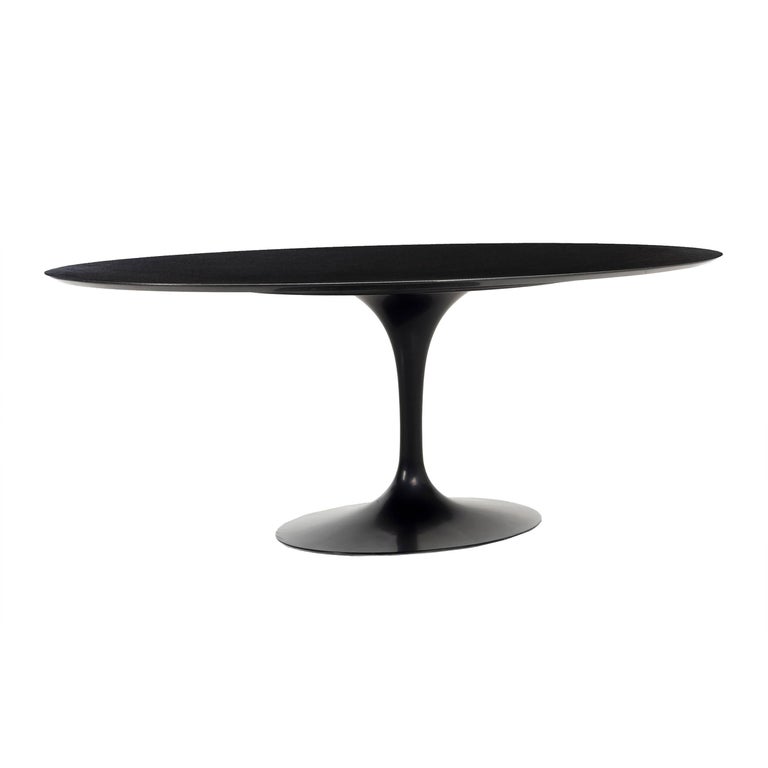 “This iconic table, like the one in the dining room, is both beautiful and timeless,” says Linder, “and it solves a very common design dilemma: It looks absolutely stunning whether with two chairs at it or eight.” 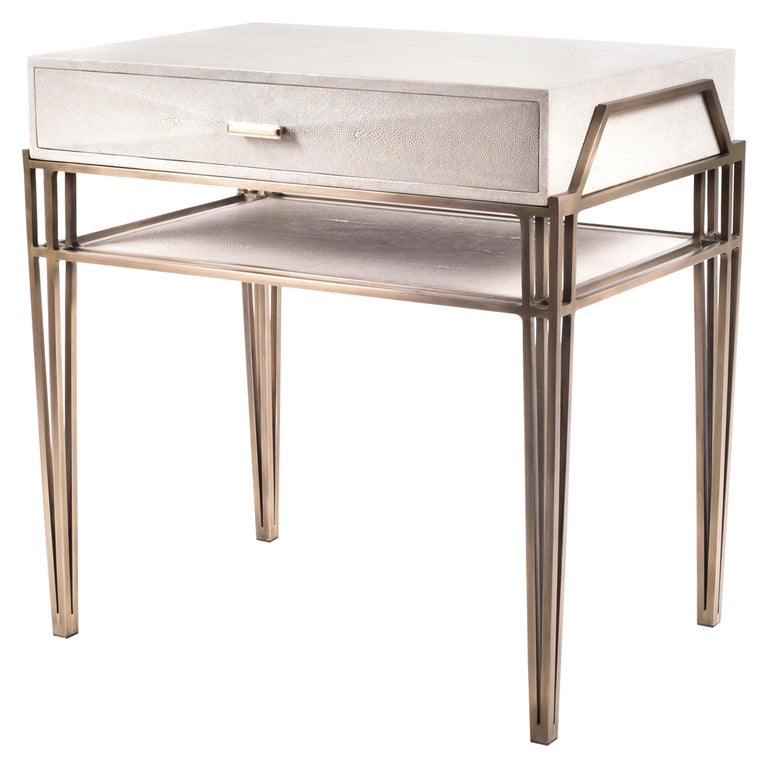 “These crisp and tailored bedside tables appeal to us because the faux-shagreen surfaces are both elegant and practical: Spilled coffee wipes right up,” notes Linder.