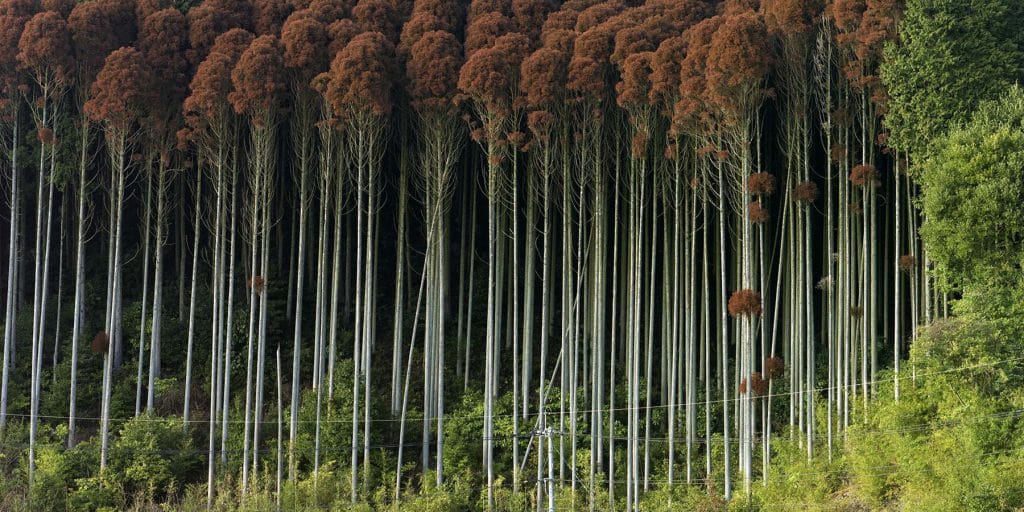 We've rounded up some of the best and brightest exhibitions of the new season, in cities from London to Los Angeles, San Francisco to New York, and points in between. 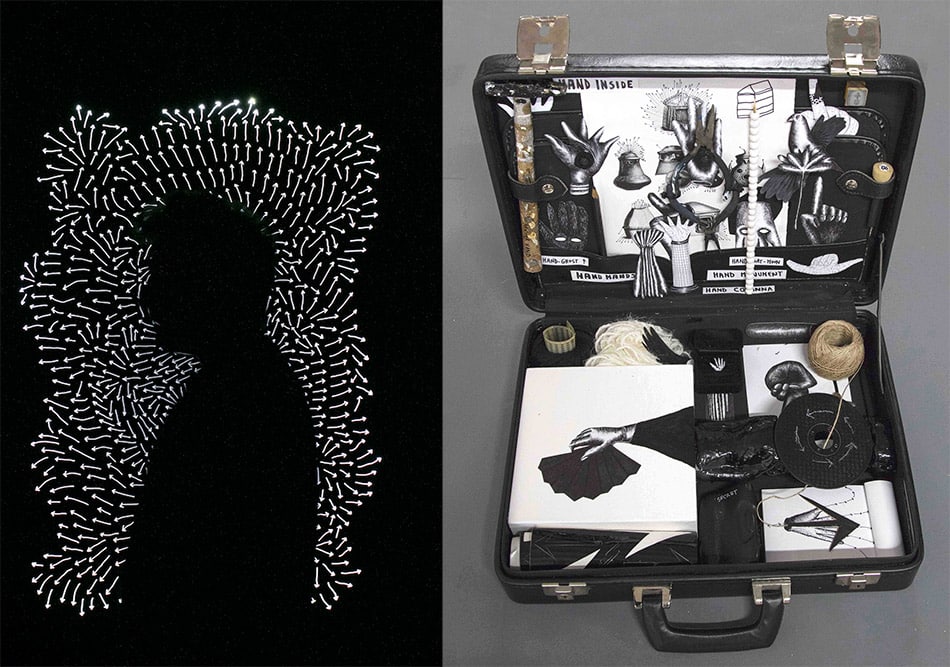 The Italian artist Andrea Bianconi sees arrows everywhere. “When we eat, when we talk, when we move, when we see, when leaves drop — everything has a direction,” says Bianconi, whose reputational star has been steadily rising in Europe.

The artist, who divides his time between Italy and New York, has captured that insight in “Breakthrough” — his latest show at Houston’s Barbara Davis Gallery. Consisting of paintings, drawings, an LED sculpture and a performance, the varied body of work is tied together by the simple but powerful leitmotif of the arrow.

But if the arrow evokes the symbol-as-subject overtness of Pop, in Bianconi’s hands, it is far more expressive, even decorative at times. Most often, he groups the hand-drawn little forms in clusters so that they seem to quiver with the movement they connote. They are vectors, but they can look like mushrooms, spores, plants, falling stars or any number of other things. 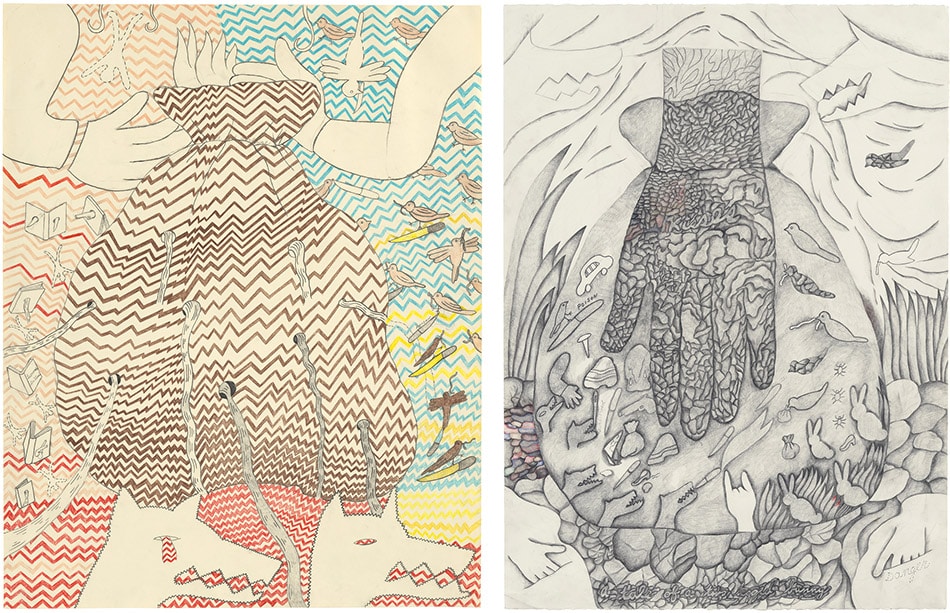 Suellen Rocca’s Neatest Garbage (left) and Tale of the Two-Legged Bunny, both 1982, on view at Matthew Marks Gallery on New York’s West 22nd Street. Images © the artist, courtesy of the gallery

In the mid-1960s, six artists in Chicago got together to exhibit work that was worlds away from the austere minimalism spreading through New York’s art scene. Known collectively as the Hairy Who (or sometimes the Chicago Imagists), they used an exuberant, transgressive cartoon style of drawing and painting, often incorporating comics, posters and ads, to tear apart social mores.

On view at the West 22nd Street, New York, space of Matthew Marks Gallery, “Suellen Rocca: Drawings” trains the spotlight on the later pieces of one of the founding Hairy Who members with 30 nature-themed drawings made between 1981 and 2017. Although created decades after the epic social unrest of the 1960s, the images have a surreal, psychedelic quality that feels far outside the mainstream.

Rocca’s work is also currently being featured in “Hairy Who? 1966–1969,” the first major survey of the group, at the Art Institute of Chicago through January 6. 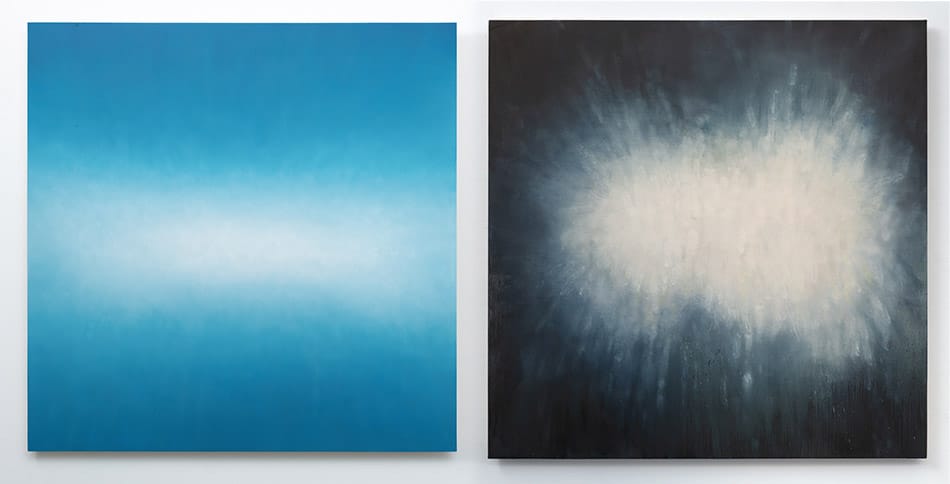 If the atmospheric abstract paintings in “a few singles and one greatest hit” — currently at Los Angeles’s Leslie Sacks Gallery — look at first glance like luminous photographs, it’s because Alex Weinstein has managed to illuminate the surfaces with the force of a flash. Conjuring vistas of sky and sea, the stellar and the submarine, the artist’s large-scale new works continue his “Burst” series, a title that aptly indicates the way the light emerges from his deep blue grounds.

Weinstein, who is a surfer and produced these canvases after emerging from the depths of an all-consuming home renovation, incorporated messy drips and splatters in his work for the first time — which must have been freeing after the perfection and rigor required for residential construction. 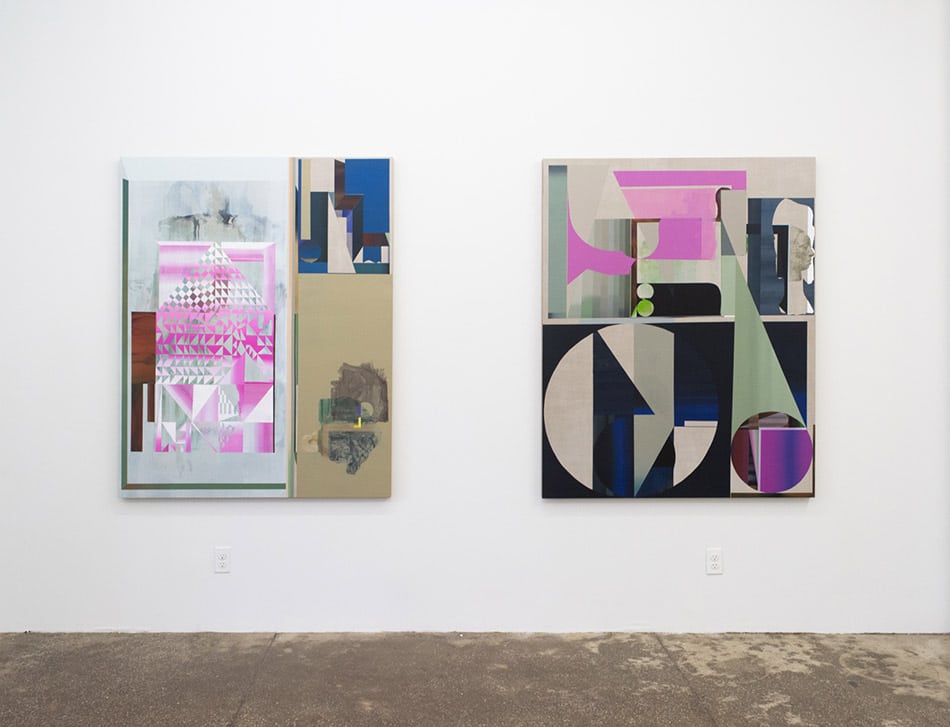 Rubens Ghenov’s Gong Fu Cha for Obaluaiê, The Ontologist Earring (left), and Raag Mariposa, both 2018, on view at Morgan Lehman Gallery, in New York. Photo courtesy of the artist and the gallery

With their graphic lines and bits of printed text, Rubens Ghenov’s abstract paintings have been compared to mid-century book-cover design. They certainly borrow from a modernist aesthetic — think hard-edge abstraction spliced and diced with the language of advertising — but the Brazilian-born Ghenov is also exploring memory and the unconscious with the incorporation of faded images.

Like many of Ghenov’s previous paintings, these new works — displayed in the solo show “Aft Key” at New York’s Morgan Lehman Gallery — were inspired by the late Spanish poet Angelico Morandá. If you haven’t heard of him, it’s because Ghenov made him up. But that doesn’t give his poetry any less credibility in Ghenov’s work.

The ersatz writer’s ideas about the nature of time, existence and sound, for instance, make the paintings far more layered. They are complex aesthetically, too. In these new pieces, Ghenov leaves uncovered swaths of the raw linen on which he paints and employs a photographic transfer technique for the first time.

“Treescapes,” at Laurence Miller Gallery, in New York, pairs the work of two Japanese photographers — one established, the other emerging — who have taken trees as their subject. Toshio Shibata, one of Japan’s best-known landscape photographers, tends to capture human interventions in pastoral places: fences and rusty bridges in lush green surroundings, the tidy patterns of cultivated farmland.

The younger Yoko Ikeda, meanwhile, finds poetic abstractions in nature, turning her lens on the knotty trunks and spindly branches of leafless winter trees or a blanket of soft, pink flower petals covering the ground. Since its inception, the camera has been framing the landscape and determining how we perceive the world, and this comparison is a good reminder that different ways of seeing are constantly being discovered. 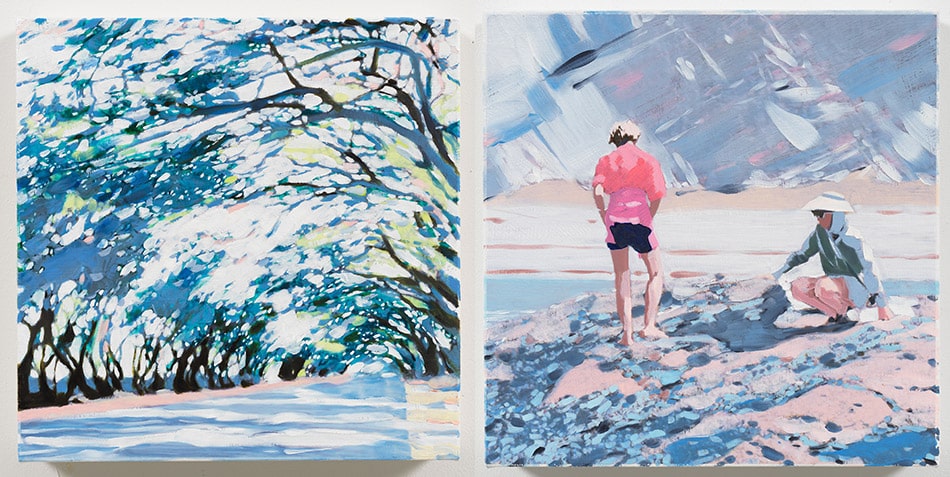 With summer still lingering in the rearview mirror, Isca Greenfield-Sanders’s mixed-media paintings of sunny beach scenes — currently on view in “Inherited Landscape” at Berggruen Gallery, in San Francisco — seem especially poignant, even if they feel like snapshots of decades past.

Using found amateur photographs from the 1950s and ’60s, which she scans and transforms into watercolors and oil paintings, Greenfield-Sanders creates strangely nostalgic narratives of another era. The work brings to mind Fairfield Porter, who painted at a time when life may have been simpler but no less emotionally complicated.

Greenfield-Sanders has written that she is drawn to seemingly benign images with an underlying menace. But her elegant pictures are also soothing and uplifting, like memories softened by time, with their gentle, abstracted contours and sun-bleached yellows, sparkling marine blues and verdant greens. 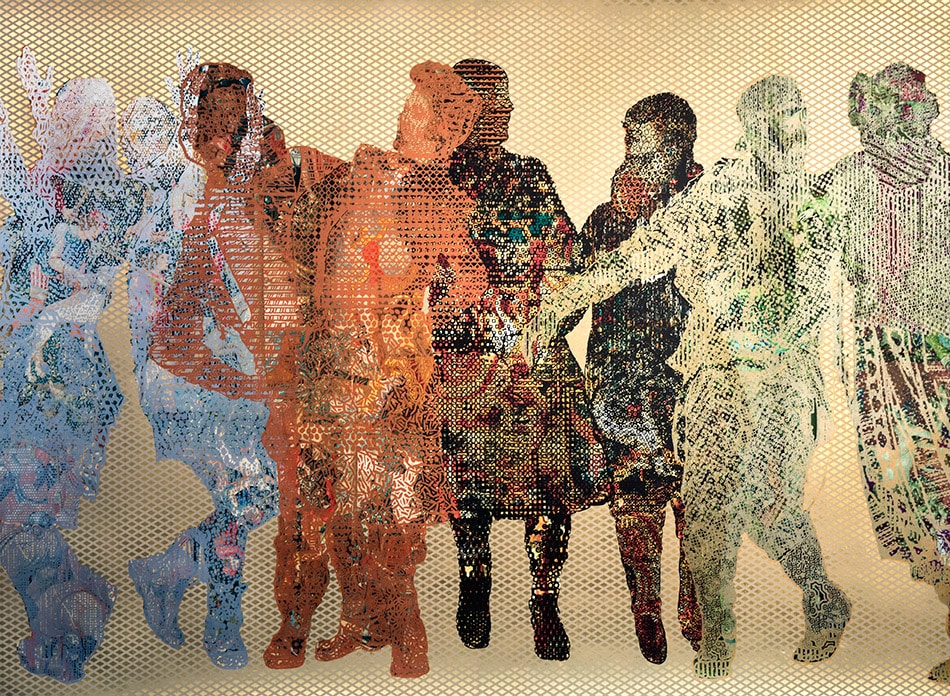 The Brooklyn-based duo Anthony Aziz and Sammy Cucher are among the few contemporary artists working in the traditional medium of jacquard tapestry, and the results are highly unexpected.

The artists’ process is elaborate, involving live dancers, green screens, digital manipulation and, of course, a loom. But the visual results are even more complex, overlapping the language of digital news feeds and the imagery of war and suffering with the courtly aesthetic of fine tapestry. 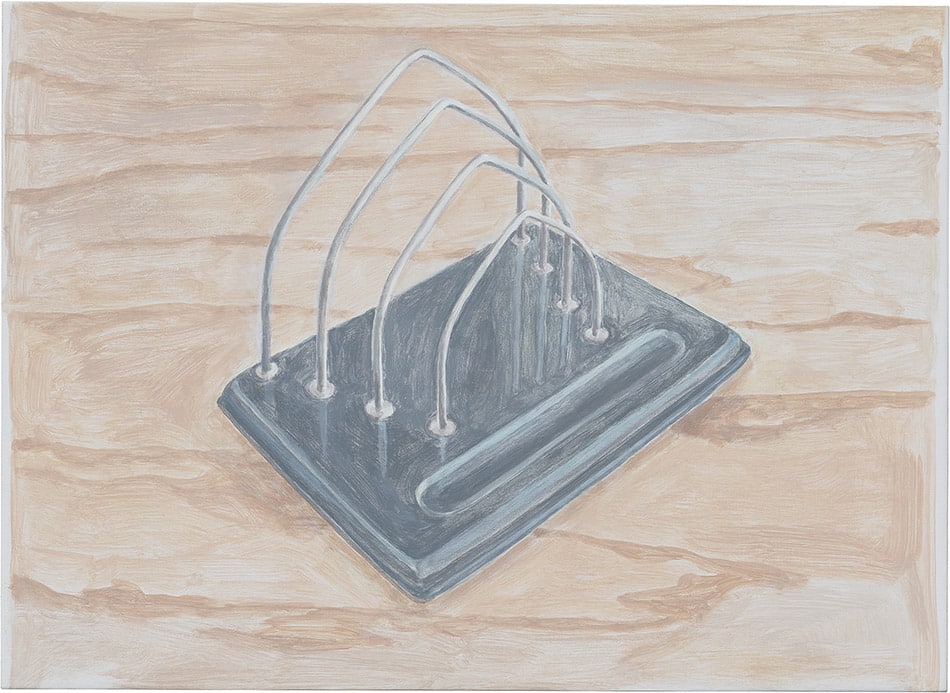 Francesca Fuchs‘s Letter Rack, 2017, on view at Inman Gallery, in Houston. Image courtesy of the gallery

Named Texas Artist of the Year by the Art League of Houston (which is currently hosting an exhibition of her works representing objects made by children), Francesca Fuchs paints still lifes, focusing on a single object per image.

In her latest show at Houston’s Inman Gallery, Fuchs, who was born in London but is now based in Houston, presents images of items her late father kept on his wood desk: a pen, a coaster, a stone, a notebook. They are vaguely Pop in the banality of their subjects, but Fuchs has rendered them as ethereal totems, like ghosts of the objects they were before they transitioned from office wares to mementos.

Judith Murray’s Slide (left) and Currents, both 2017, on view at the Chelsea gallery of Sundaram Tagore, in Manhattan. Images courtesy of the gallery

The first thing one might notice when looking at Judith Murray’s richly layered abstract paintings, currently on display in a show called “Tempest,” at Sundaram Tagore Gallery’s Chelsea space, in New York, is how visible the artist’s hand is. Every mark is a clear imprint of the brush she used to apply the rich oil. But it is the bar painted down the right edge of each canvas that identifies these works as signature Murrays.

The artist has been inserting this strangely compelling vertical feature in her paintings since the 1970s, when she showed at the fabled Betty Parsons gallery. They interrupt the continuous surface of her lush abstract expanses like the binding on the cover of a book, but the works are no less harmonious for it. 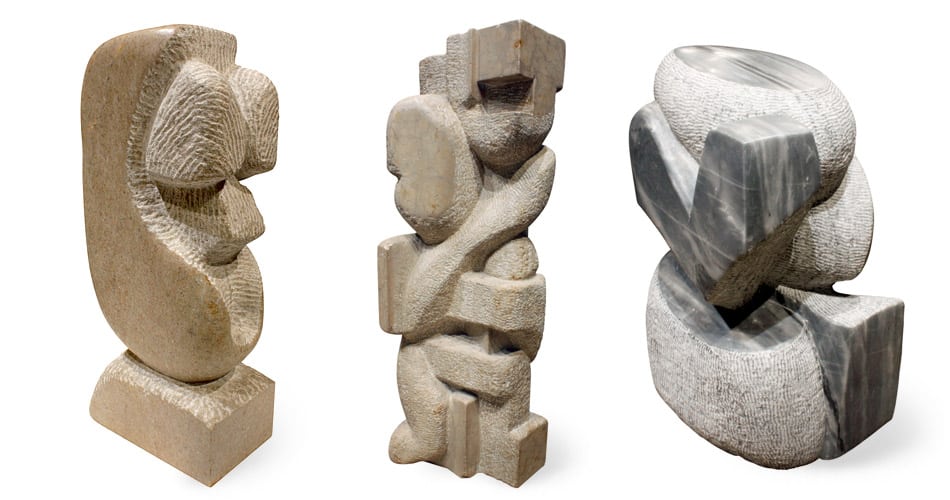 From left, Naomi Feinberg‘s Mask, 1970s; Dream Within a Dream, 1960s; and Visitor, 1970s, all on view at New York’s Lobel Modern. Images courtesy of the gallery

Working out of a female artist collective in Union Square in the 1960s and ’70s, native New Yorker Naomi Feinberg transformed raw hunks of stone into soft, biomorphic forms, like Flight (1960s), composed of alabaster marble carved to resemble muscular wings, and Embrace ( 1960s), a couple emerging from a block of Vermont marble.

Coaxing an organic sensuality out of her material, she carved stone masterfully but gently, with an eye toward pioneering women of the 20th century. The artist, who died in 2009, certainly deserves to receive greater recognition, which the show “A Woman Sculpting in a Man’s World,” at New York’s Lobel Modern, should bring her.