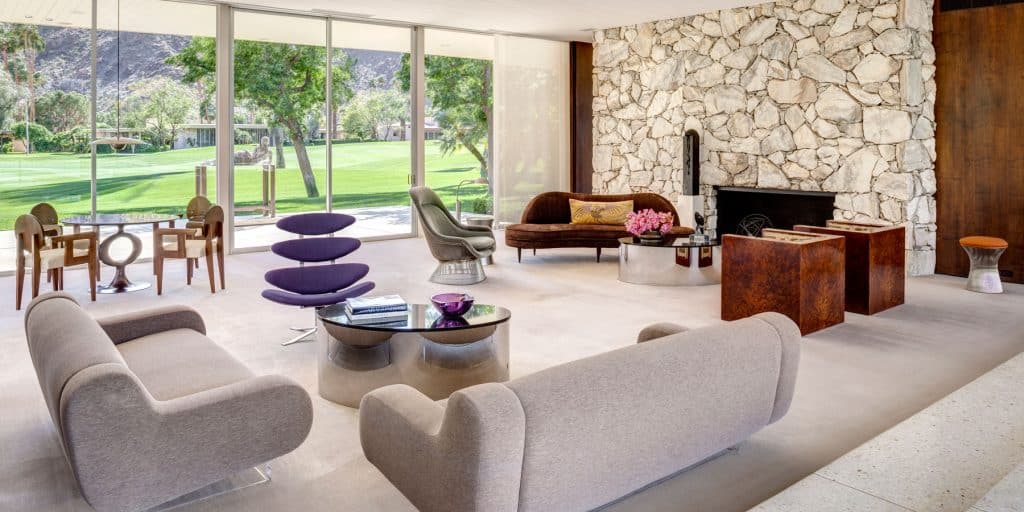 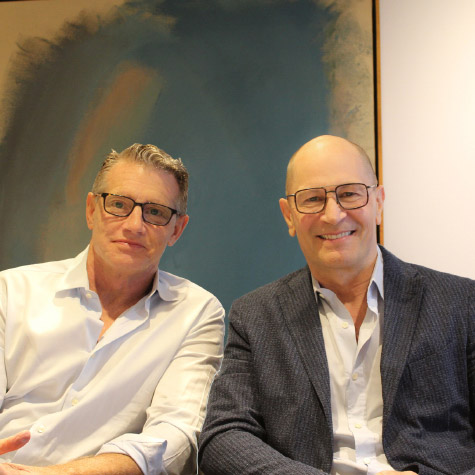 Founded just over 20 years ago and headquartered in New York’s East Village, the architecture and interior design firm FormArch has made a quiet, discreet name for itself. If you haven’t heard of it, that’s because its clients prefer it that way. “We have a lot of homeowners who do not want their houses photographed,” says Brent Leonard, the firm’s principle design director. Among those clients, the studio — which specializes in residences — is known for its smart focus on plan and program and on how people flow through spaces and experience them.

With a staff of less than a dozen people, FormArch crafts tasteful, family-oriented domestic spaces gently inflected by 1960s modernism. It’s no surprise that Leonard, a Canadian who studied at Parsons and then never left New York, invokes Oscar Niemeyer as a touchstone. Like that great Brazilian architect, he says, “we believe in movement in and out of the landscape. 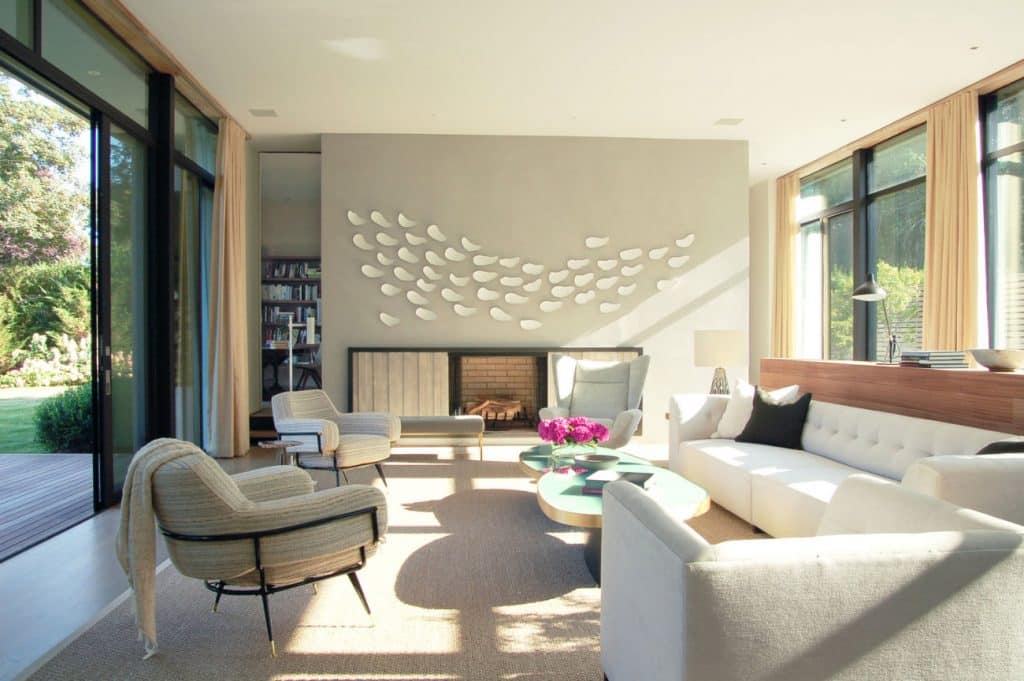 The Manhattan-based architecture and interior design firm FormArch used a flock of small, white steel forms to create a decorative tableau over a fireplace in a house in the Hamptons’ Amagansett. Photo by Jen Fong 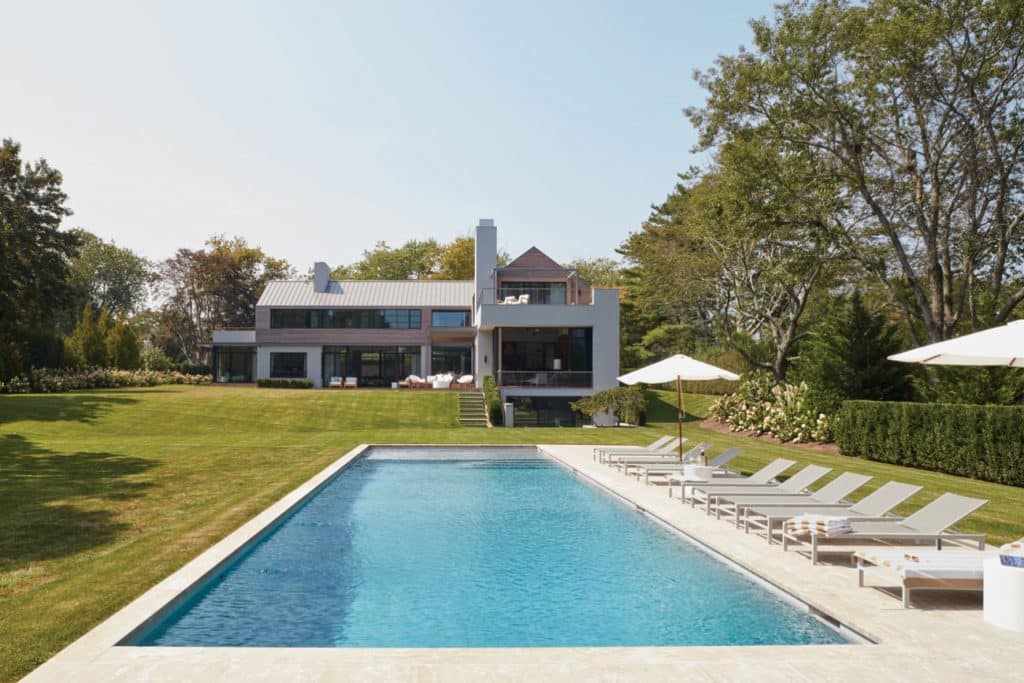 The Amagansett house takes inspiration from the architecture of the area’s historic farm buildings, but expresses it in an entirely modern way. Photo by Jen Fong 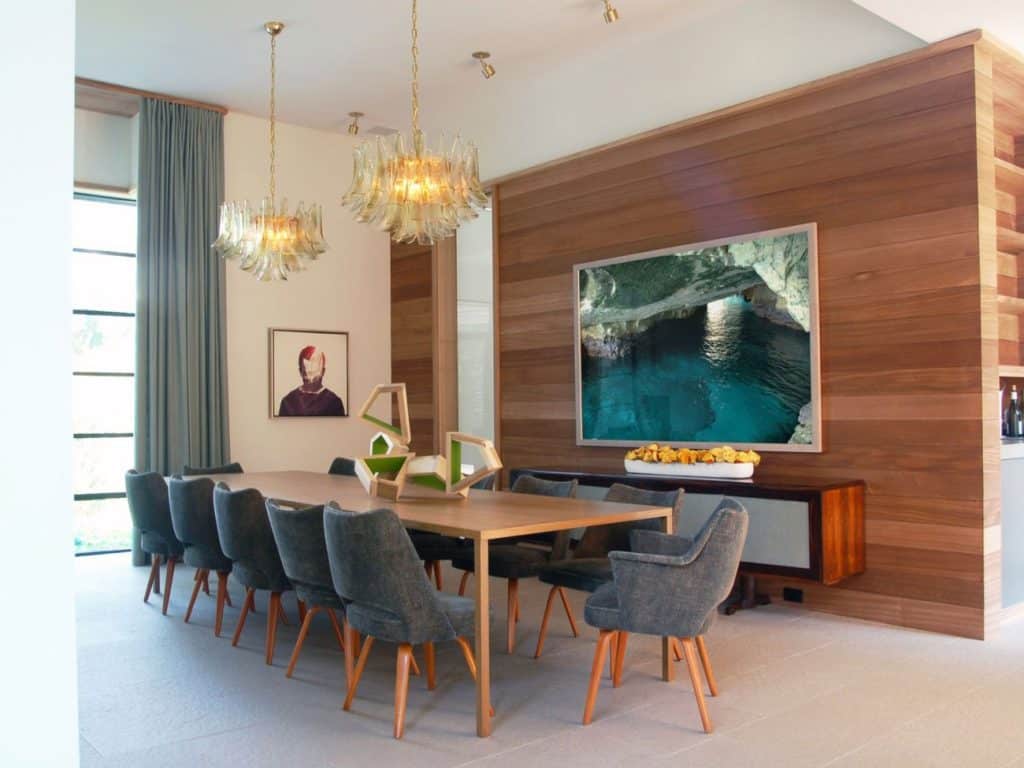 Murano glass Mazzega chandeliers from Antiques MC hang over the table in the Amagansett house’s dining room. The sideboard is from Império dos Sentidos, and the chairs are Thonet. Photo by Jen Fong 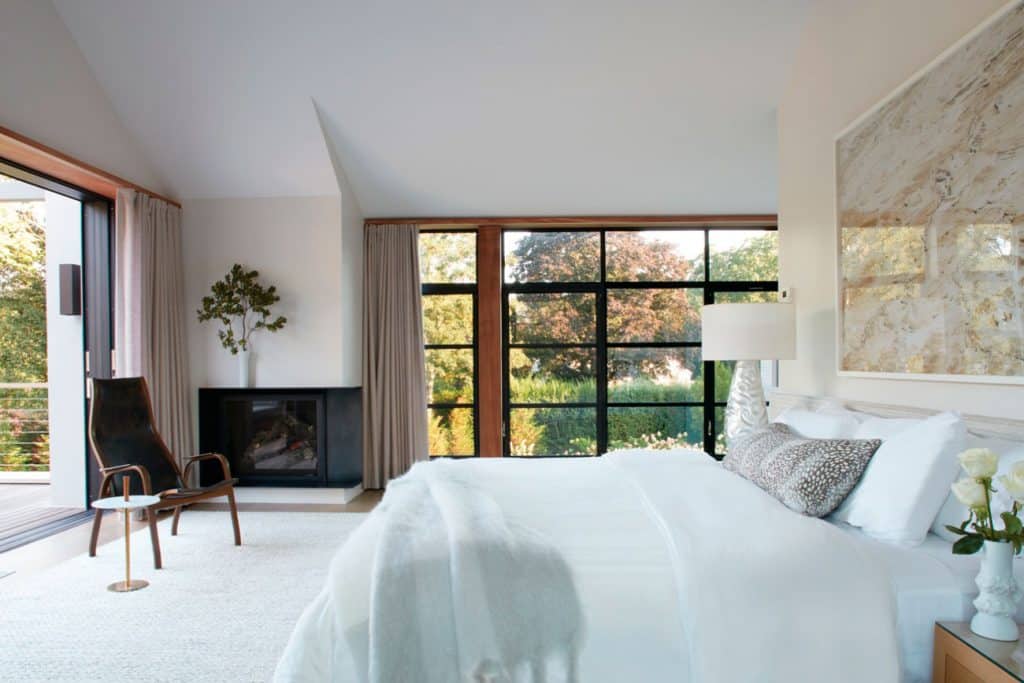 An Amagansett bedroom has window walls that open to bring the outdoors in. The bedside lamp is from Objectiques. Photo by Jen Fong 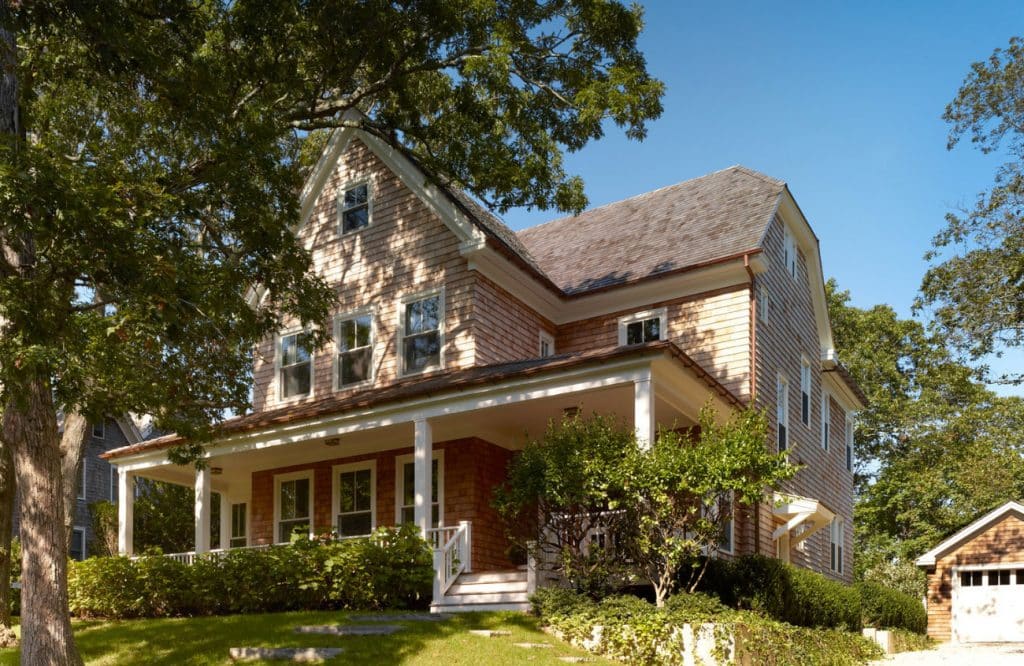 The classic Shingle-style farmhouse exterior of a home in the Hamptons’ Sag Harbor belies the modern interiors FormArch created within. Photo by Brad Stein 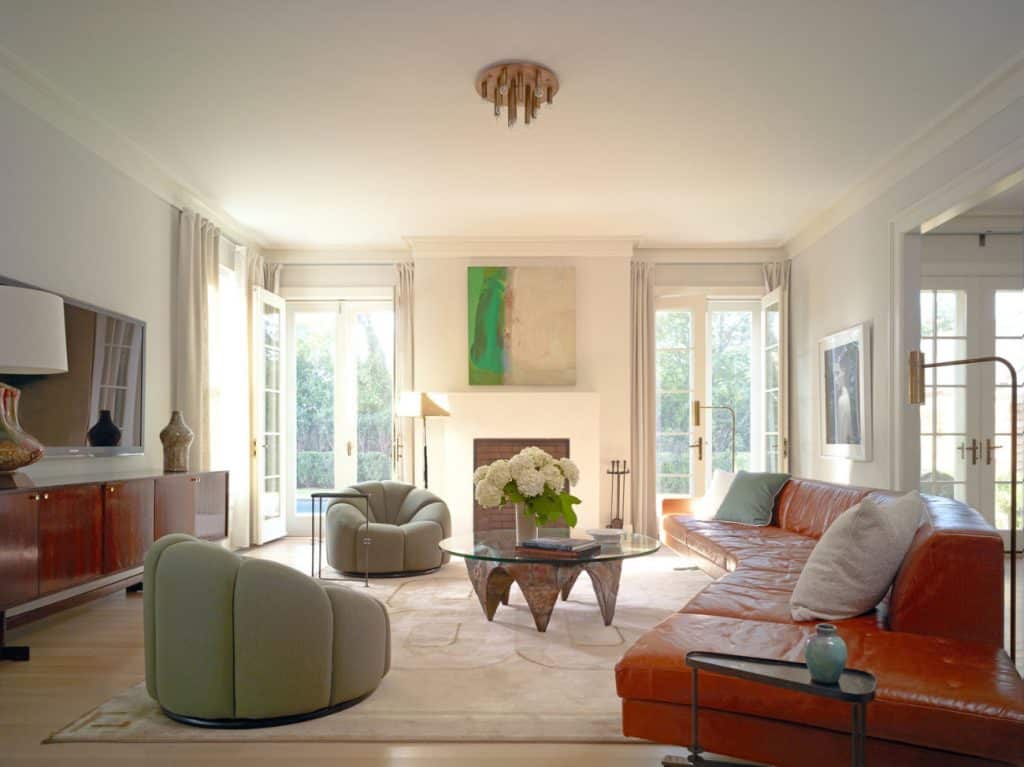 The Sag Harbor living room centers on a Paul Evan coffee table from Retro Modern to whose left sits a pair of Pierre Paulin Élysée chairs. The painting on the back wall is by Frank Wimberley. Photo by Brad Stein 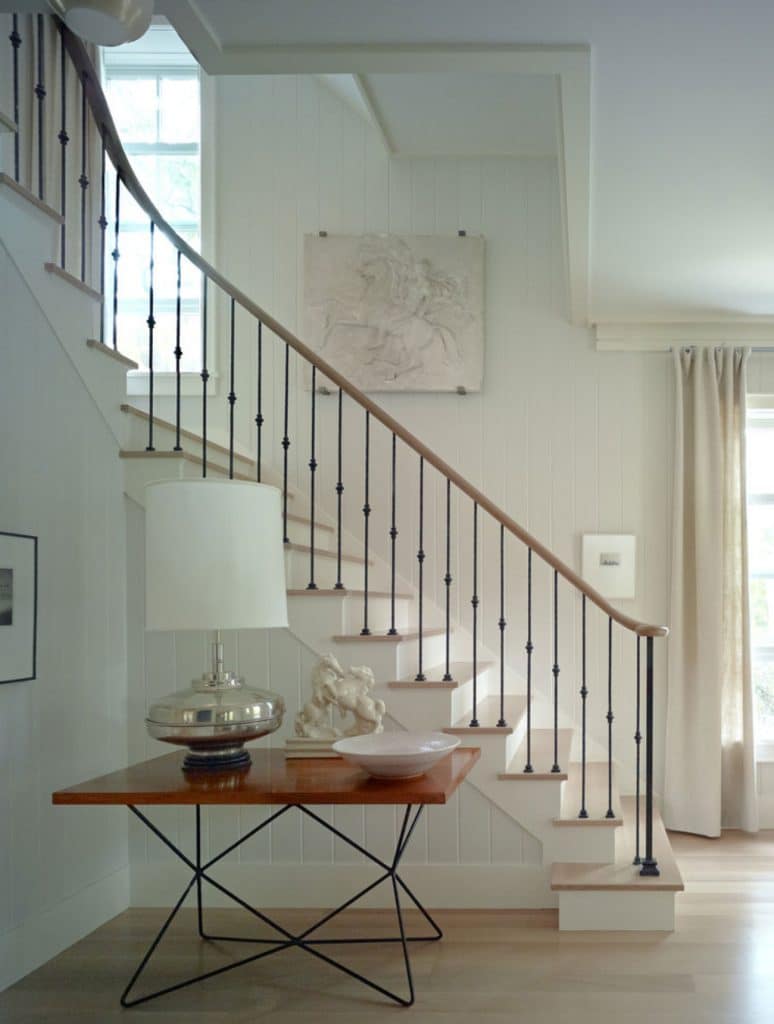 The metal base of this accent table echoes the delicate balustrade of the staircase. Photo by Brad Stein 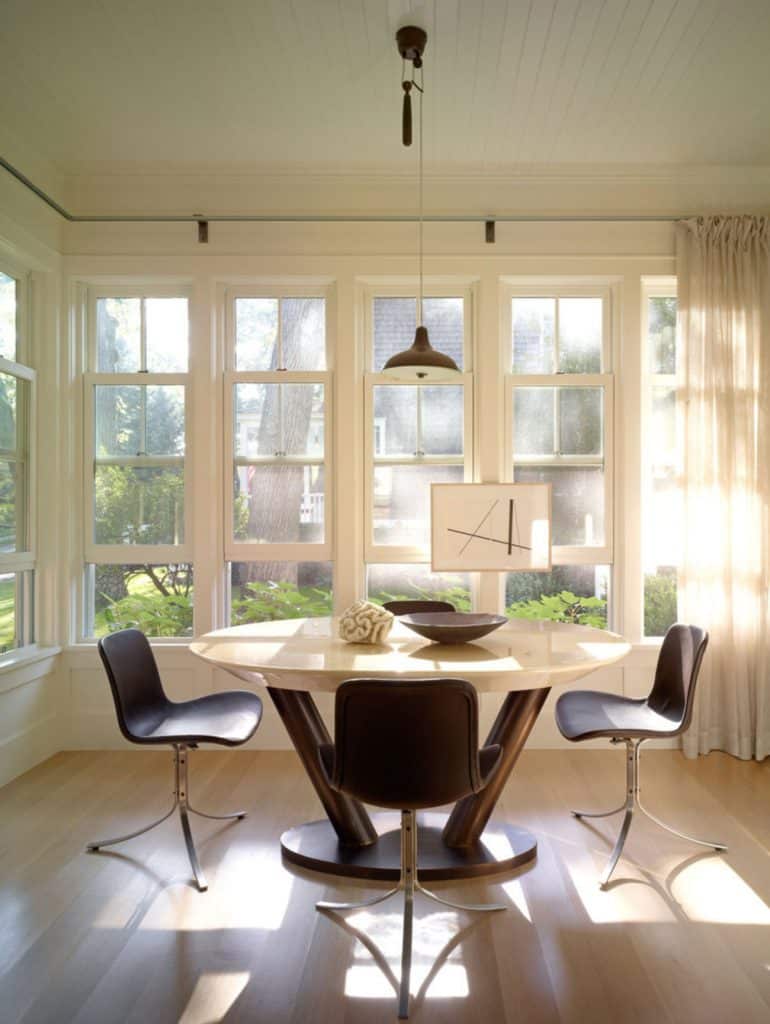 Leonard’s cofounder and business partner, Sean Webb — a Buffalo, New York, native who studied at the University of Texas at Austin — describes their approach this way: “We try to be subtle, and there’s not always a ‘moment’ that’s easily photographed. We don’t orient the projects around a splash of color.” 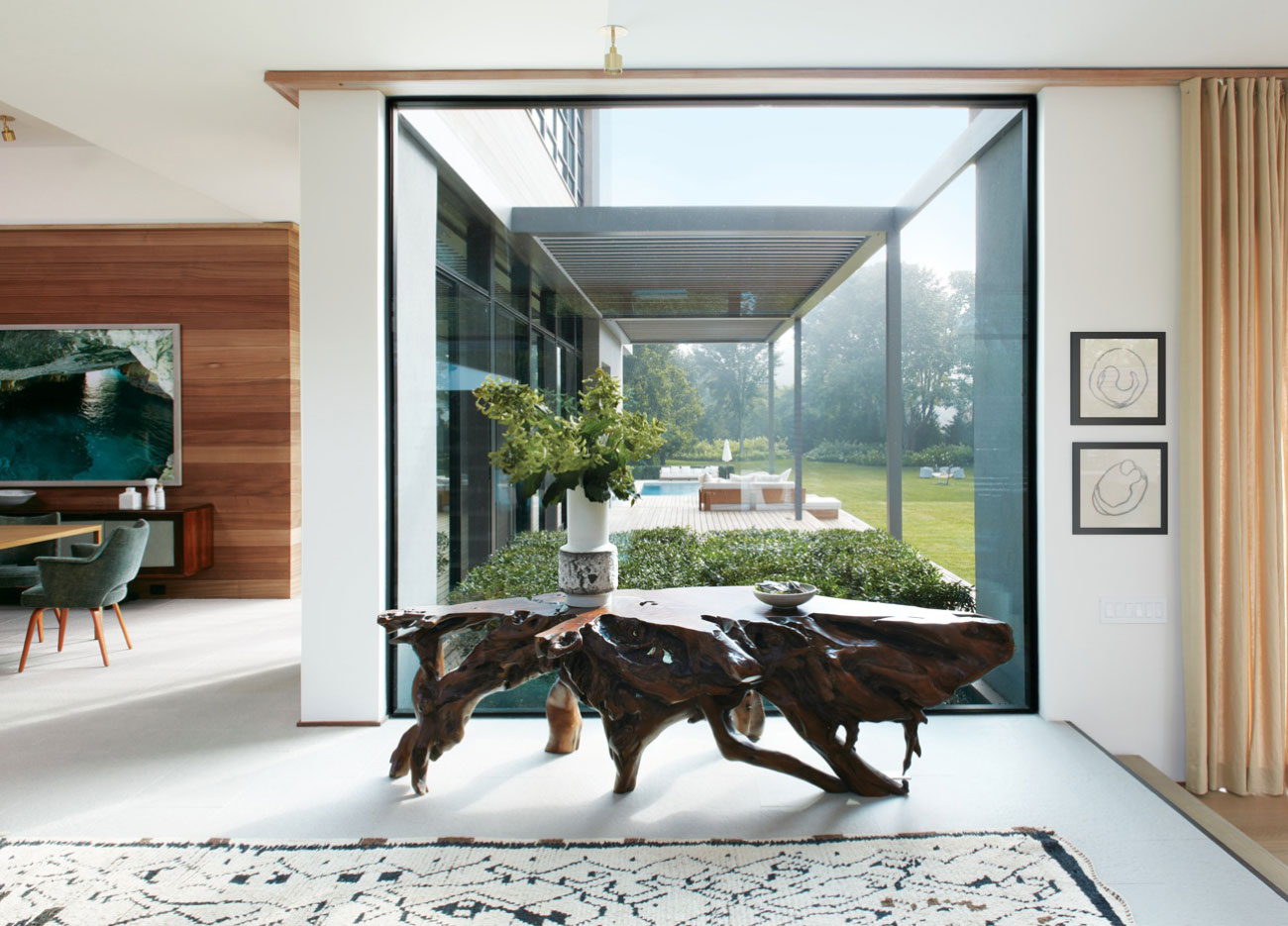 A tree-root console table from Horseman Antiques holds pride of place in front of a window in a house FormArch designed in Amagansett, on the East End of New York’s Long Island. Photo by Jen Fong

Indeed, in their interiors, the designers often work in a neutral palette. “The inhabitants create the color,” says Leonard.

The area between Southampton and Montauk on the East End of New York’s Long Island is home to much of FormArch work. The firm retrofits and updates older houses and also builds clean-lined new structures that manage to jibe with the traditional vernacular of the area. Perhaps the best example of this is a cedar-shingle-clad Sag Harbor residence. From the street, it seems to be an old farmhouse, but inside, it is revealed as a brand-new loft-like building with minimal articulation of rooms. Its living room skews strongly toward the 20th century, with a Paul Evans coffee table and a pair of Pierre Paulin Élysée chairs in sage. Sunshine streams in from all over, in accordance with one of FormArch’s guiding principles: Move toward light. 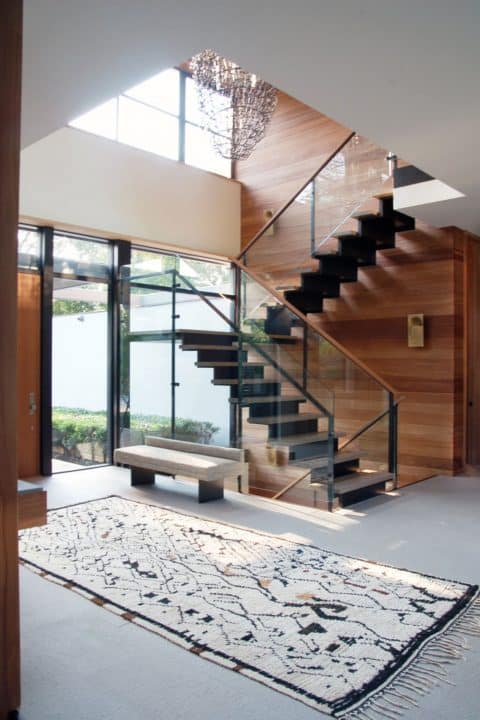 In the Amagansett house, a chandelier from Michael Del Piero hangs over a floating staircase near an antique rug from Nazmiyal. Photo by Jen Fong

For an Amagansett family, the firm built a modern L-shaped home of concrete, stucco and cedar composed of two slightly offset stacked volumes, with the bottom one jutting out slightly. The flowing floor plan is typical of FormArch’s work, evoking what Webb calls “expansiveness and spaciousness.”

In the dining room, a high-modern 1960s aesthetic comes to the fore, with snazzy vintage Venini lights, mid-century Thonet chairs in a mottled blue color from Metro Retro Furniture and a Portuguese credenza, which sits under a photograph of a grotto taken by one of the homeowners’ family members.

Architecturally, one of the firm’s most ambitious pirouettes was the renovation of a 1905 East Hampton house of some renown. Featured more than 100 years ago in House Beautiful and  once owned by the architect and historian Robert A.M. Stern, it had to be lifted up and turned 90 degrees.

“The construction crew put it on these steel girders. You’d think it was a very technological thing, but it’s a low-tech process,” says Leonard. “And there are five guys under the house saying, ‘A little to the left.’ ” 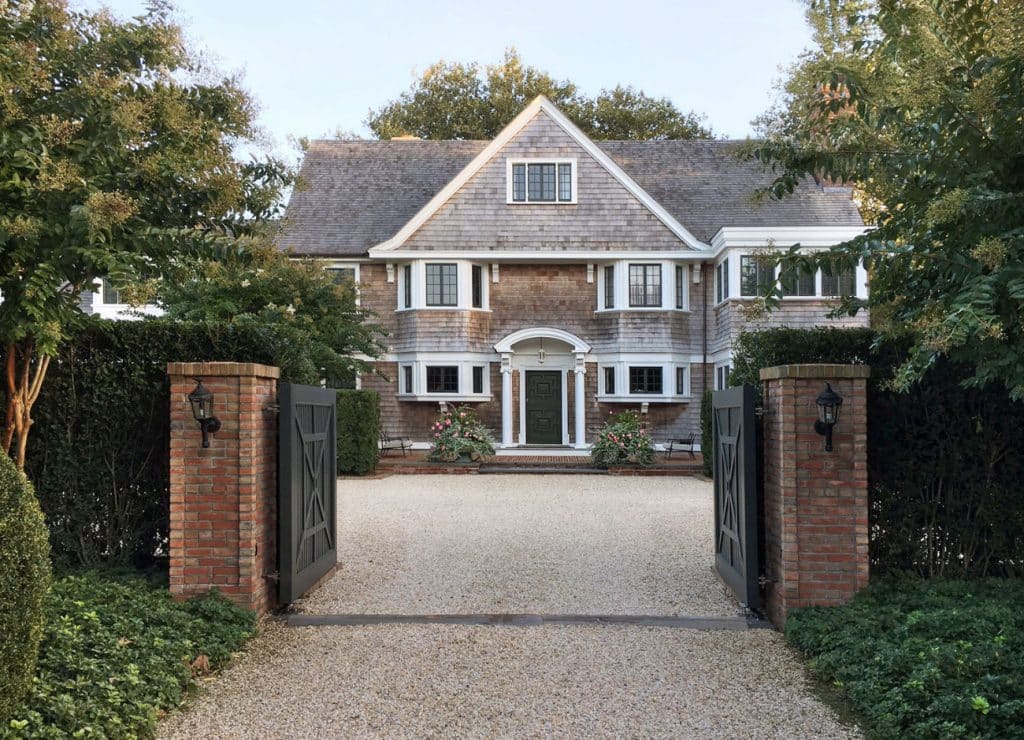 A historic 1905 East Hampton, New York, home — featured in House Beautiful a century ago and previously owned by architect and historian Robert A.M. Stern — was a particularly ambitious project for the Manhattan-based firm FormArch. Photo by Brad Stein 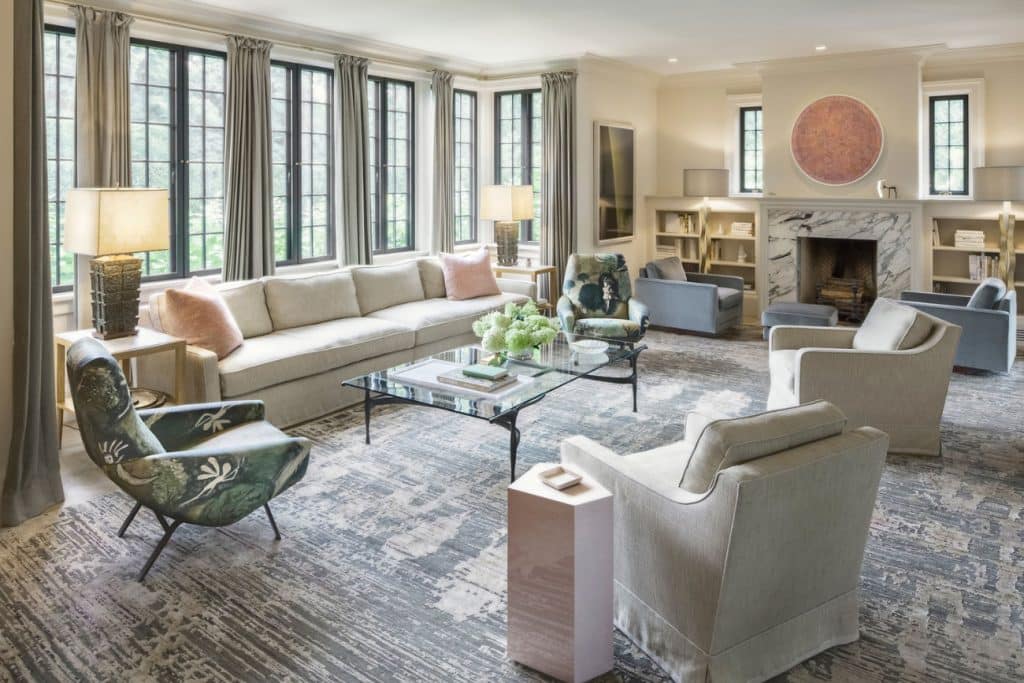 In the East Hampton living room, a pair of bronze lamps from the 1940s, purchased from Lobel Modern, flank the sofa. The artwork comes from Valerie Wade, among other galleries. Photo by Brad Stein 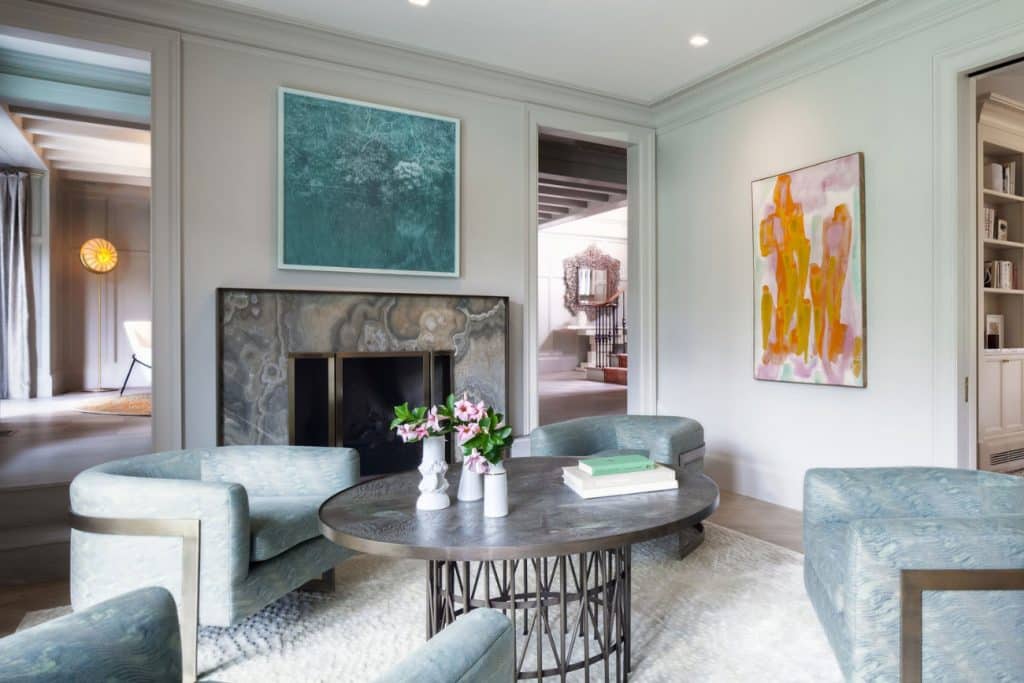 The firm extracted warmth from a relatively cool palette in another seating area in the East Hampton home. Photo by Brad Stein 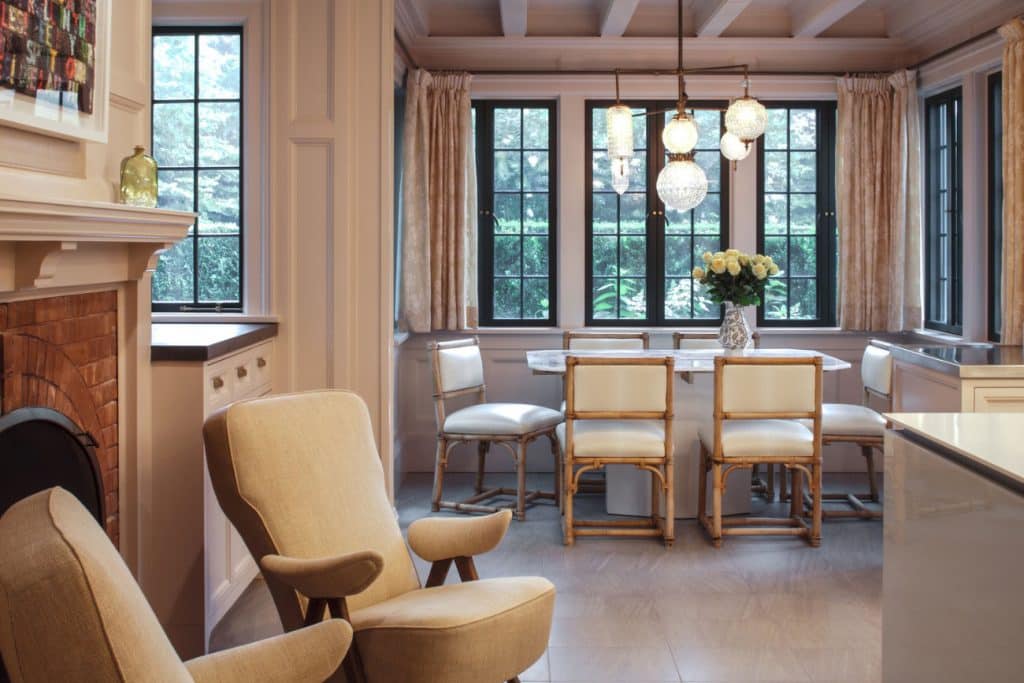 A pair of armchairs from Morentz sits in front of a fireplace in the kitchen. Photo by Brad Stein 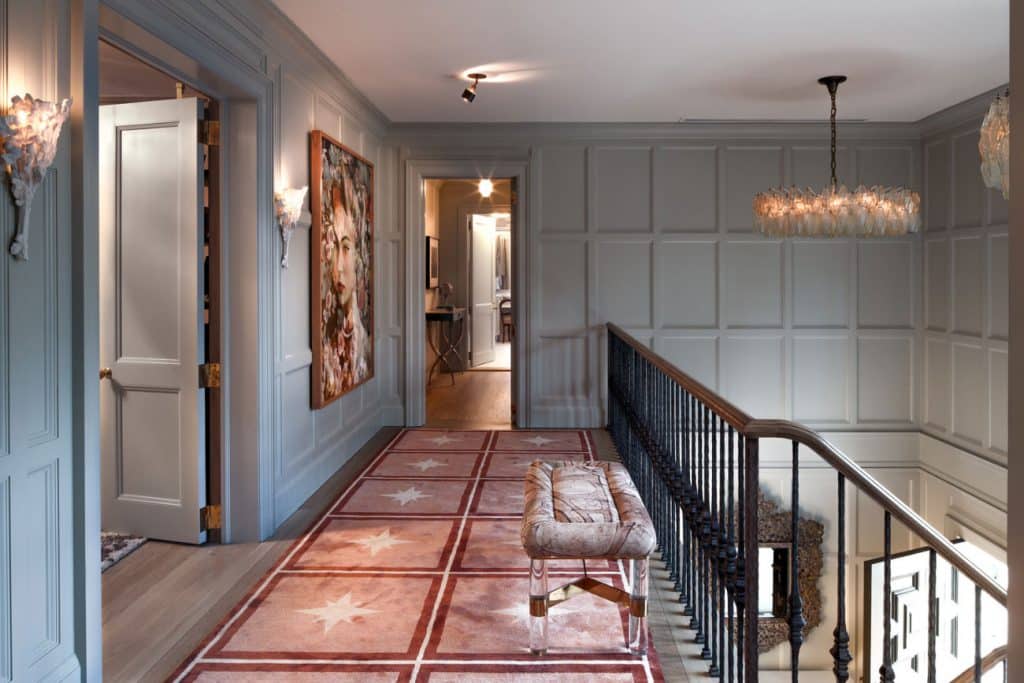 An Italian glass chandelier from Luigi Design hangs from the ceiling in the home’s wood-paneled stair hall. The mirror below is from Gustavo Olivieri. Photo by Brad Stein 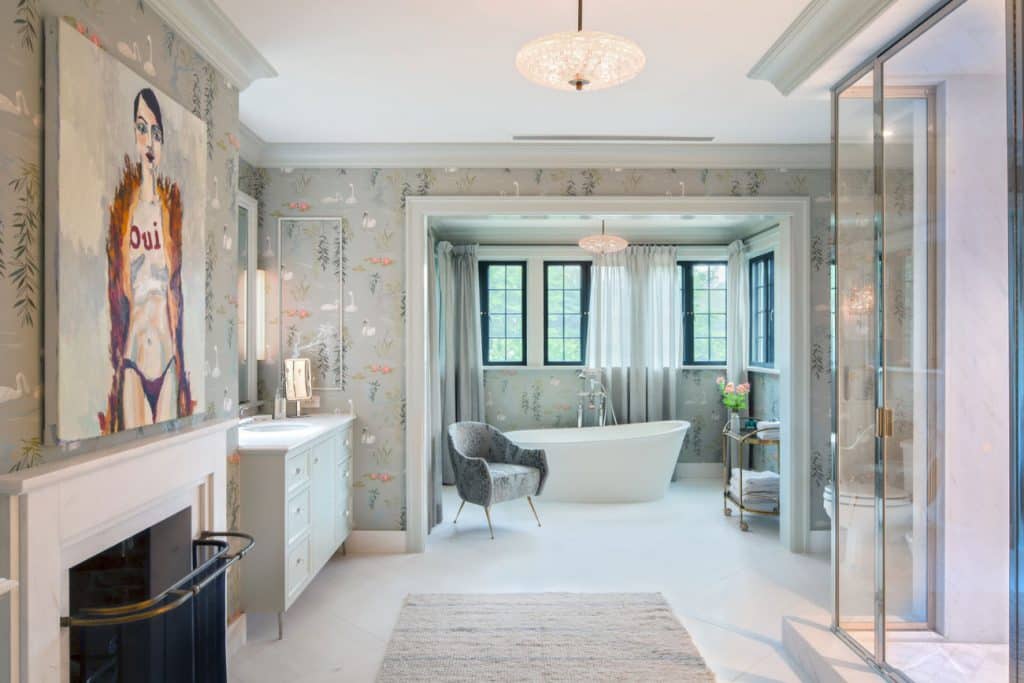 The La Briance chair next to the master bathroom’s soaking tub comes from Bourgeois Bohème; the hanging pendant lamp is by Carl Fagerlund. Photo by Brad Stein 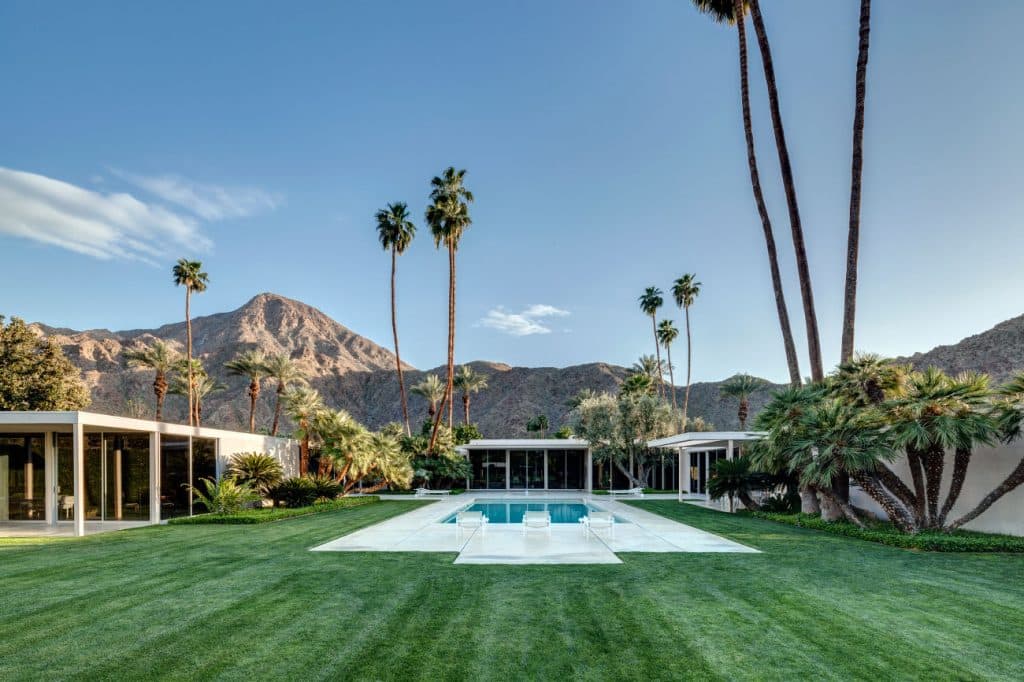 The renovation and redecoration of a Palm Springs house designed in the 1960s by William F. Cody required the firm’s careful attention and creativity. Photo by David Blank 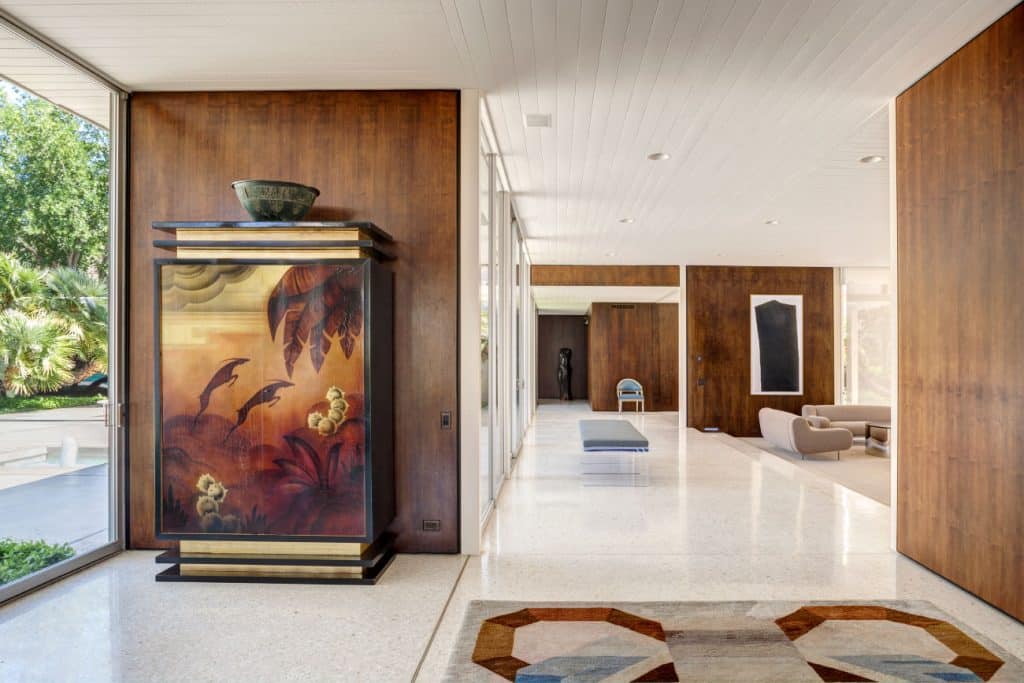 The Palm Springs homeowner’s eclectic collection of art and antiques includes a Frank Stella artwork (hanging on the mahogany-paneled wall in the middle distance) and a Biedermeier chair (against the far mahogany wall). Photo by David Blank 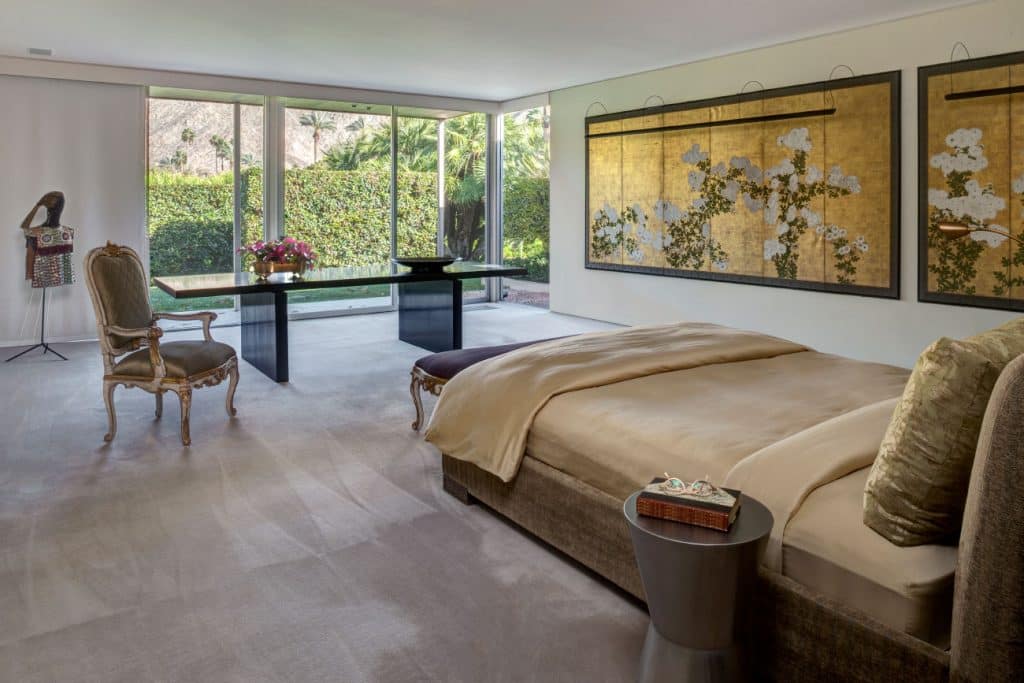 The master bedroom shows off more of the owner’s mix of art and vintage furniture. Photo by David Blank 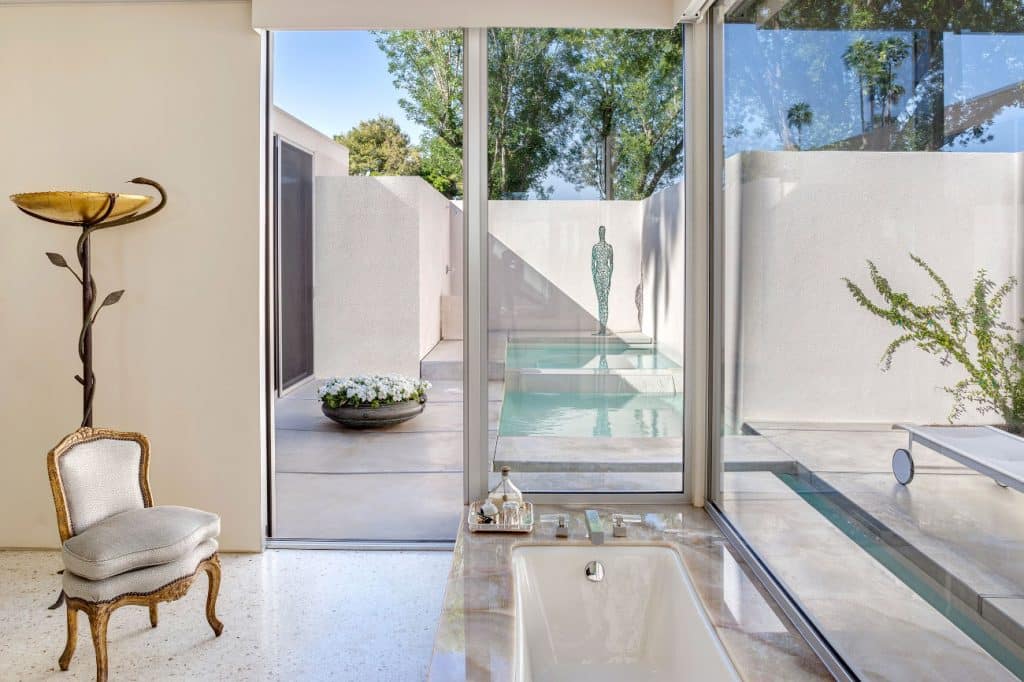 Through a bathroom’s glass wall can be seen a sculpture by Julian Voss-Andreae. Photo by David Blank

Adding to the square footage wasn’t possible, given the site, but the architects increased the number and size of the windows, “to make it breathe,” says Leonard. He notes that they adhered to their “one-room-wide philosophy” by gutting the huge portion of the house devoted to service and staff, including secret passages, to create four large rooms on the first floor. 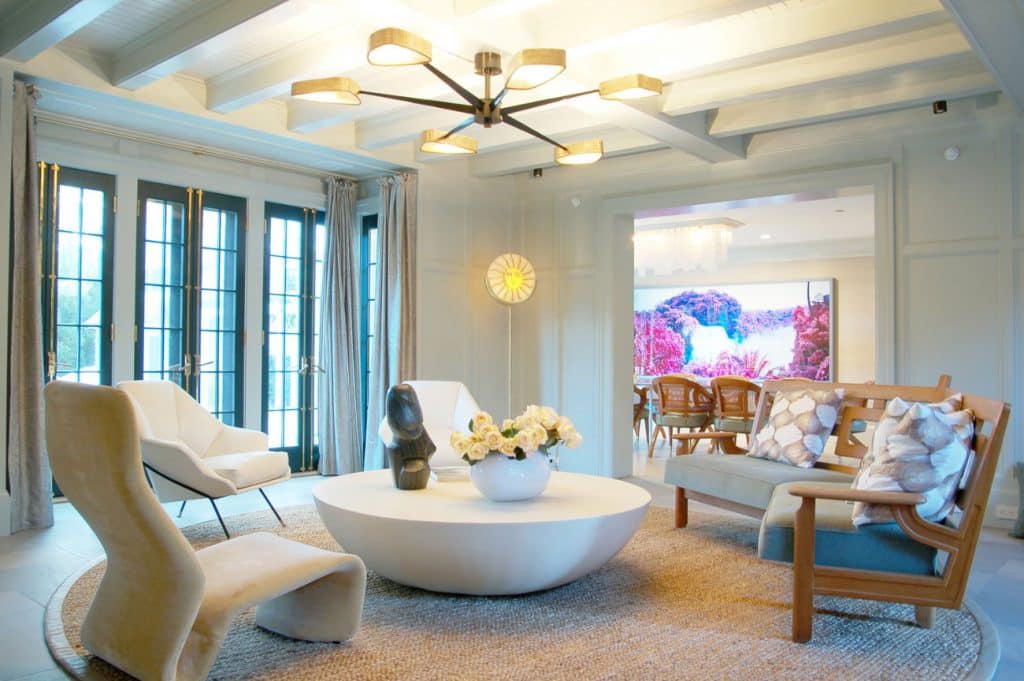 In the central space on the ground floor of a historic home the firm renovated and decorated in East Hampton, a round sisal carpet serves as a canvas for an inviting arrangement of furniture, such as an August Bozzi lounge chair, and lighting that includes an Achille Salvagni pendant purchased from New York’s Maison Gerard and a Piero Fornasetti lamp. Photo by Brad Stein

Now, in the middle of the central space on the main floor is an egg-like custom table, sitting under a starburst-shaped fixture in bronze and onyx created by Italian designer Achille Salvagni and purchased from New York’s Maison Gerard. The circular sisal rug on the new limestone floor is understated enough to let the other design elements — which include a Piero Fornasetti lamp — shine.

Given the partners’ taste for mid-century modernism, a project retrofitting a late-1960s house designed by architect William F. Cody in Palm Springs was irresistible. The focus, Leonard says, was on “reprogramming and reorienting” the U-shaped home while incorporating the owner’s existing furniture. 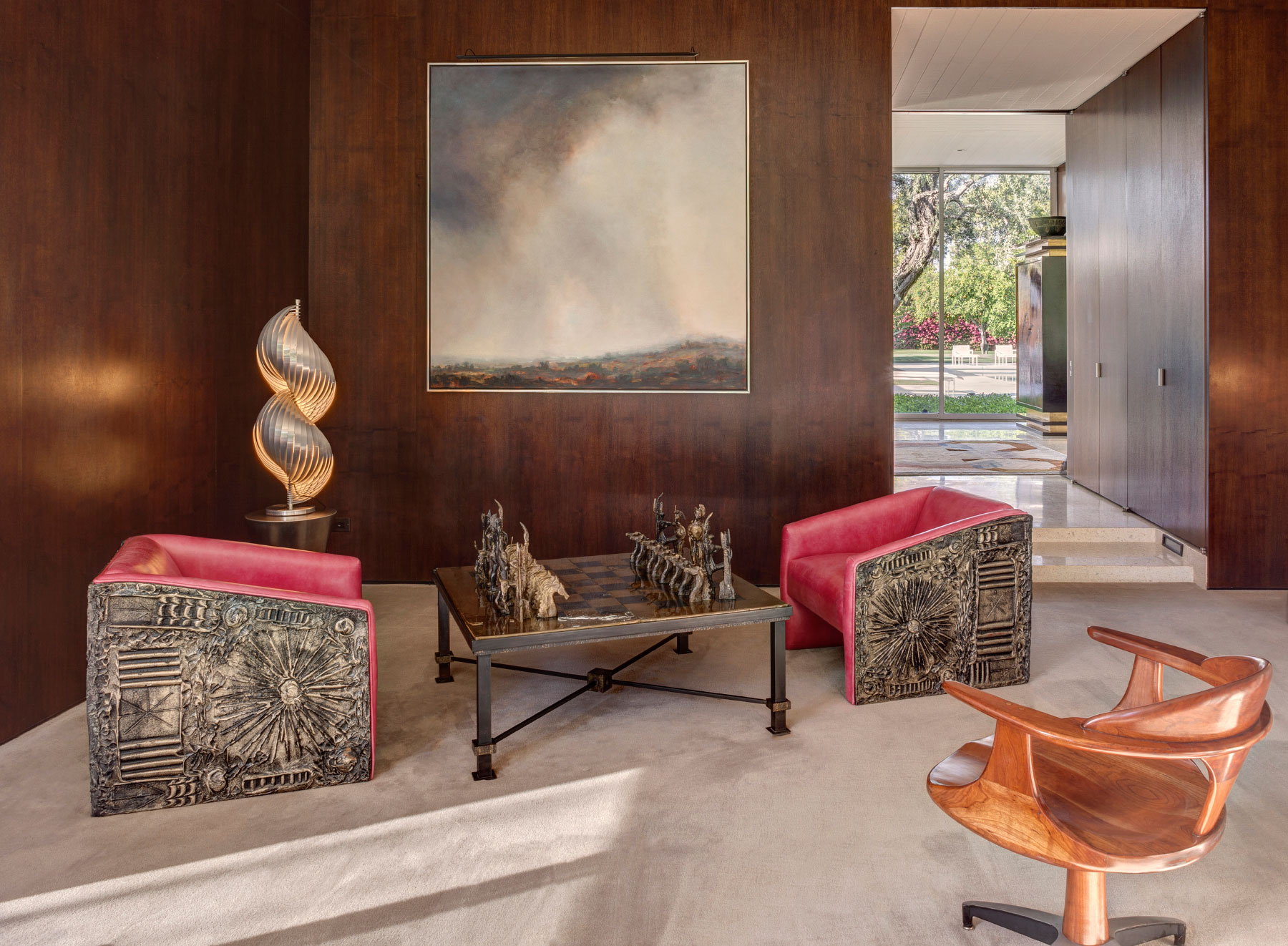 The Palm Spring house’s original mahogany-paneled walls set off the owner’s eclectic collection of furniture and art. The chairs flanking the chess-set table are by Adrian Pearsall. Photo by David Blank

The bones of the house were unusually good. Instead of the all-white palette used in most local properties, it had dark-walnut paneling that provided a contrast with the brightness of the sun outside. The firm managed to locate the artisan who had poured the terrazzo flooring decades earlier. Now 100 years old, he helped restore it to its original glory. The partners were keen, too, to keep the original white-rock fireplace, which added texture to the many smooth surfaces. The owner’s unorthodox collection of art and furniture — a Frank Stella abstraction here, a Biedermeier chair there — also appealed to the FormArch team, standing out against the sameness of some contemporary spaces.

“We’re always focused on this subtle balancing act of the architecture, the interiors and the objects” says Leonard, “and on getting that balance just right.” 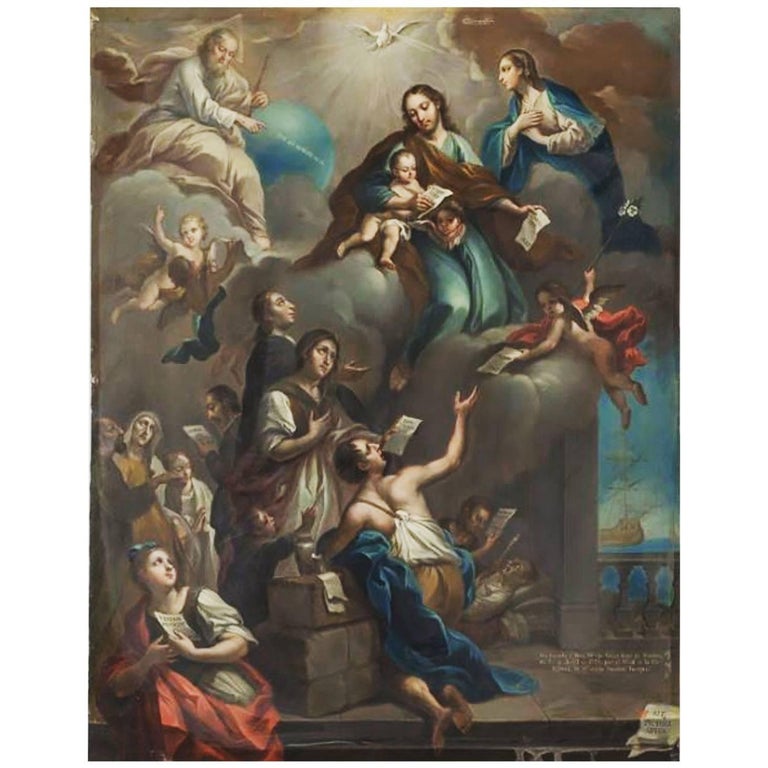 “Saint Joseph: a model for fathers and the patron of a happy death. This work has an iconographic spiritual quality, with depth and color.” 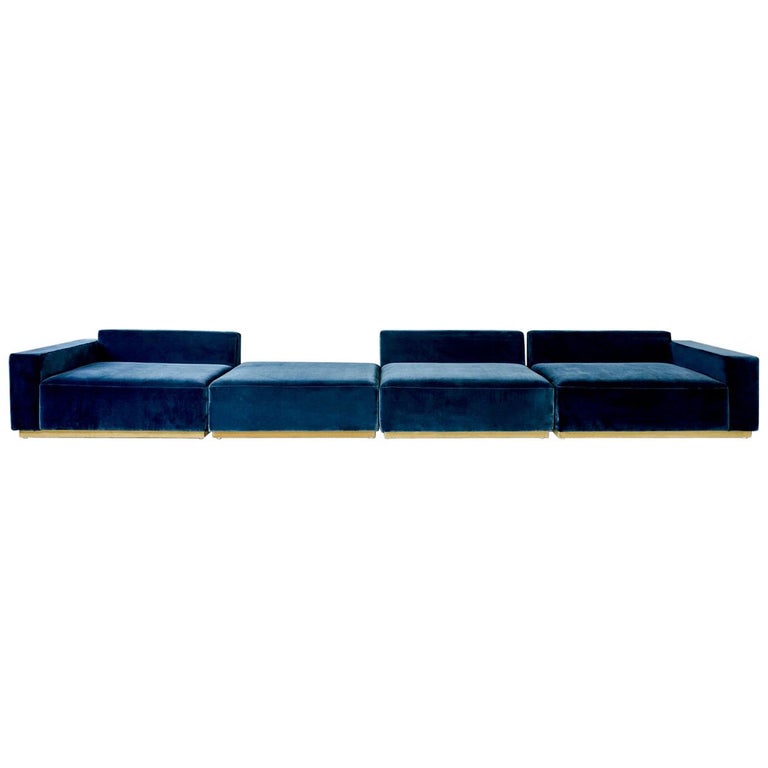 Shop Now
Alexander Diaz Andersson Oberon sectional sofa, 2018, offered by Atra
“We love the low, horizontal movement of this sofa, as well as its simple, strong shape, which could be well used to set off more sculptural pieces.” 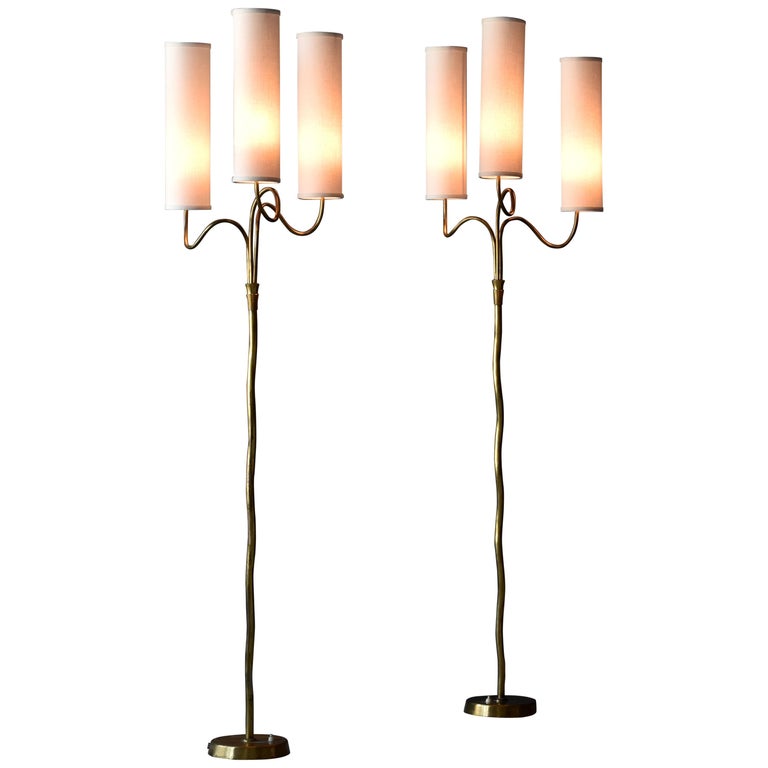 Shop Now
Pair of brass floor lamps, 1950s, offered by Ponce Berga
“We use columnar forms like floor lamps as architectural markers to define space in a room. These have an organic shape and provide warm light through their fabric shades.” 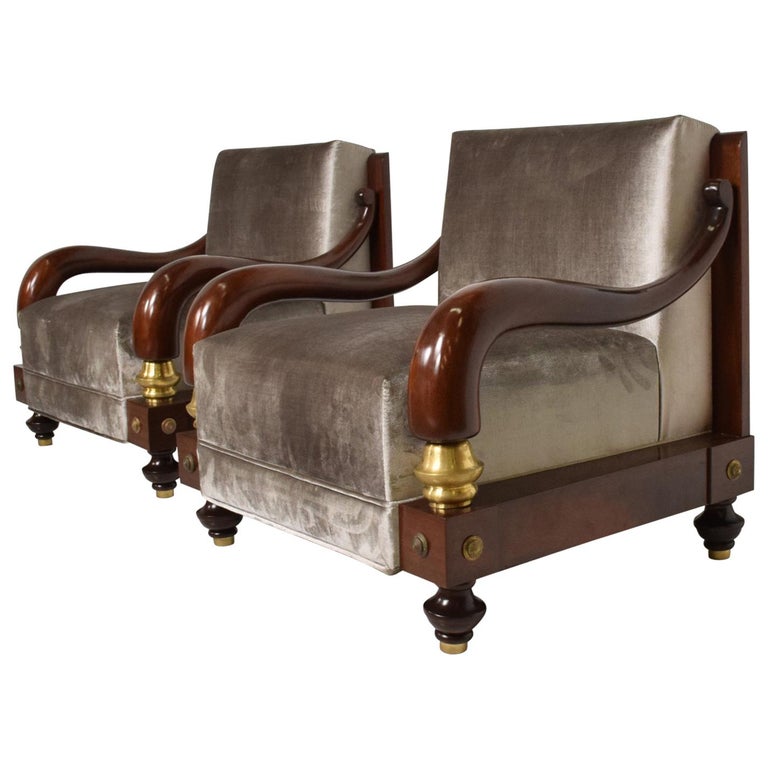 “Solid and strong but curvaceous, these chairs offer an interesting take on modernism with their sculptural exaggeration of historical shapes.” 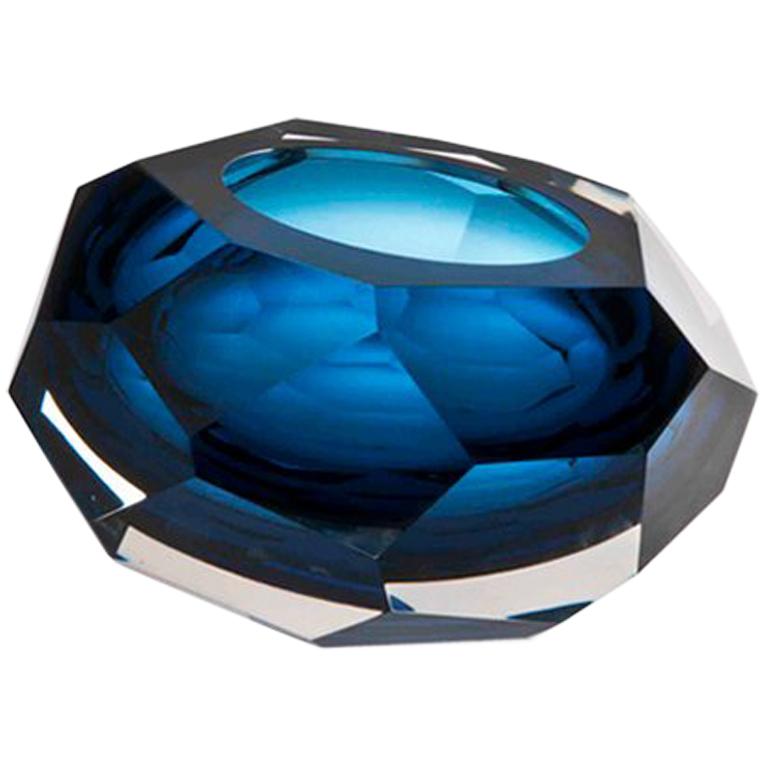 Shop Now
Orfeo Quagliata Mipreshus bowl, 2014, offered by Nouvel Studio
“We can’t get enough of the blue color in this glass. It suggests light and water, and the bowl’s facets make it feel like a jewel. The piece is all you need sitting on a coffee table.” 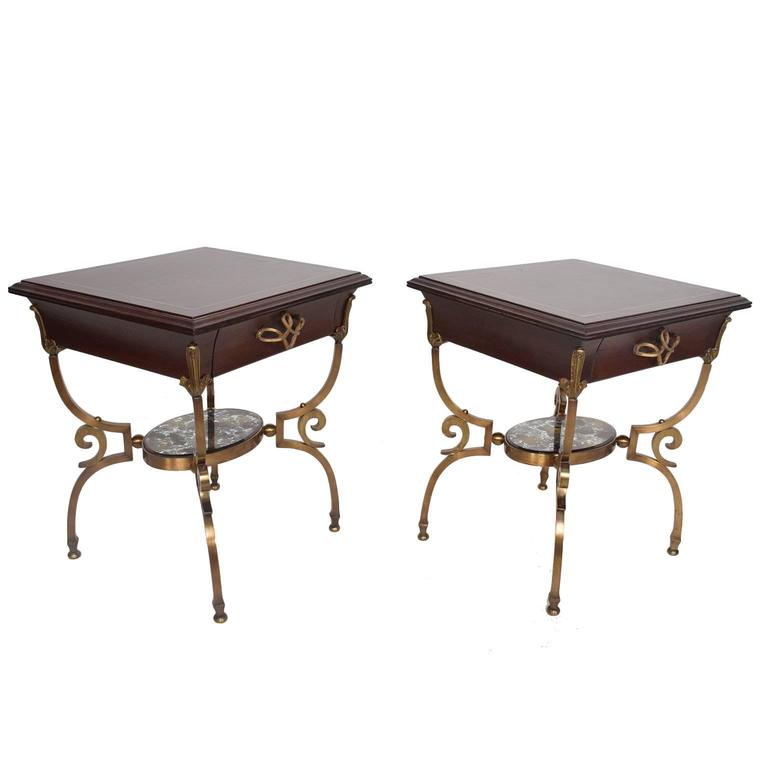 “These tables — with their slim brass edges that resemble a three-dimensional line drawing — keep your eye moving. They would be a great foil to the Vidales chairs and rectilinear Oberon sofa selected above.”