At Galerie Yves Gastou, the Art Is in the Mix 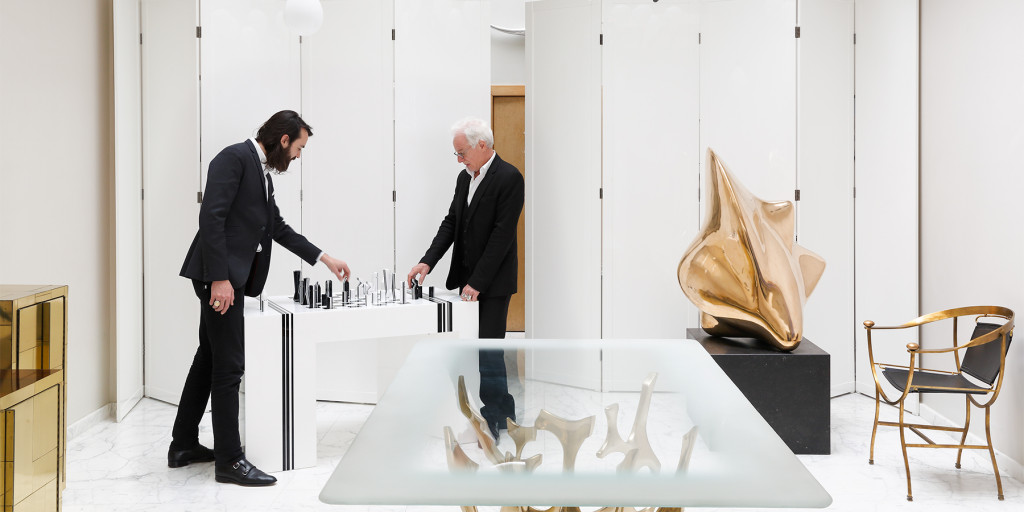 The storied dealer and his son combine a century-spanning knowledge of design and a sprinkling of dealers' superstition in their inspiring Paris shop. 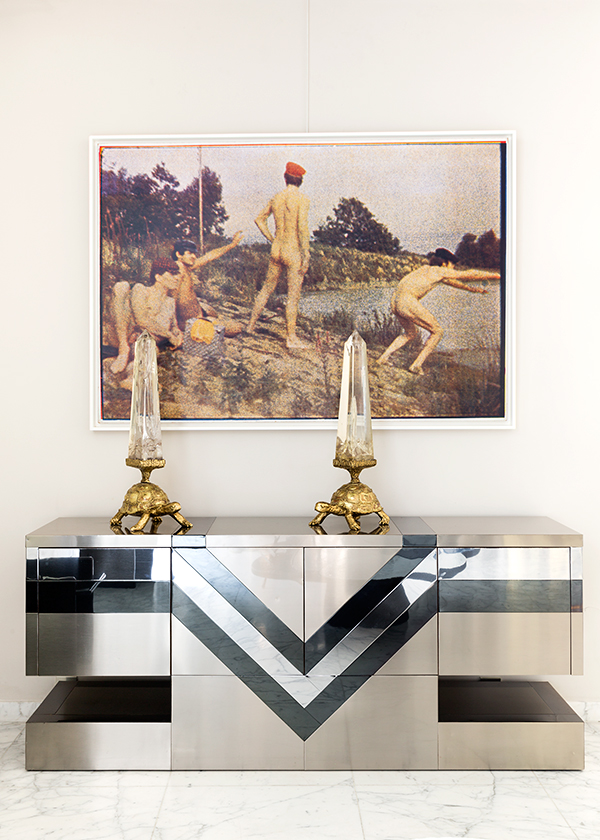 The majestic Palais des Études of the École des Beaux-Arts, one of the most distinguished fine-art academies in Paris, stands adjacent to Galerie Yves Gastou. The petite shop, with its Ettore Sottsass­–designed Italian terrazzo facade, provides a lovely architectural counterpoint to the genteel landmark and serves as an enviable satellite classroom for its students.

It’s not uncommon to find a collegiate group clustered in the back of the L-shaped gallery, listening with rapt attention to Yves Gastou himself, as the dealer discusses the art of buying and selling vintage furniture and objets d’art.

The students are there not just because of the gallery’s proximity but because Gastou has a masterful comprehension of 20th-century furnishings. His vast list of clients includes such notables as Madonna, Bill Gates, Lenny Kravitz, LVMH chairman Bernard Arnault and architect Peter Marino. He has also worked with prestigious museums, including the Centre Pompidou, the Museum of Design in Lisbon and the Musée des Arts décoratifs in Paris.

Yves’s son Victor, who runs the gallery alongside his father, insists the myriad accolades don’t elevate the pieces beyond use. Indicating a cream-colored sofa, an item so pristine it seems more like an artwork than something on which to sit, he nods encouragingly and says, “Please. You must enjoy it. It’s a piece of furniture.” Victor believes that part of any vintage item’s appeal is a slightly lived-in patina, because buyers are often attracted by “the life of the object” and want to feel they can live with it, not just appreciate it from afar. 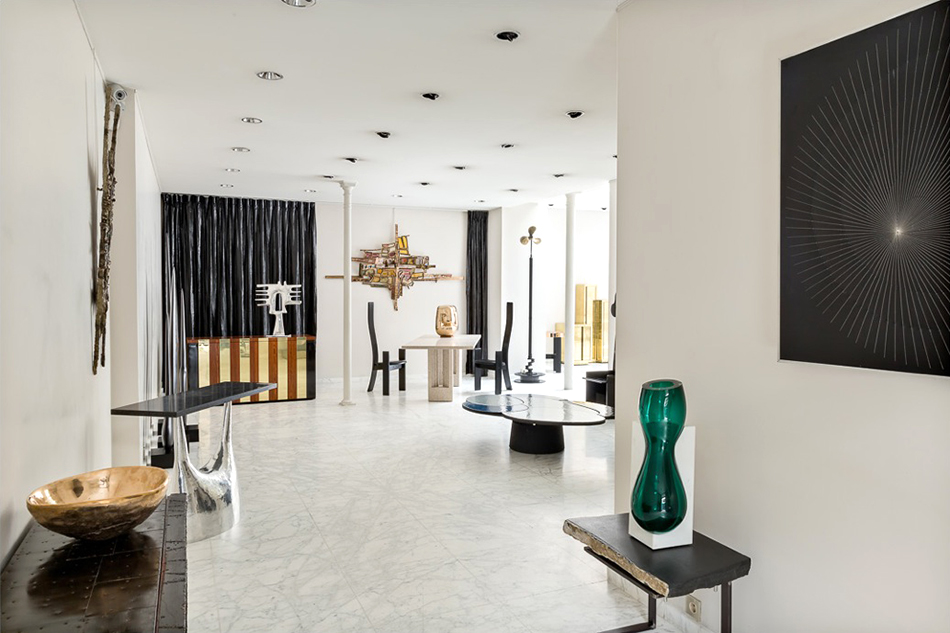 Emmanuel Babled’s Osmosi vase, 2010, rests on one of a pair of Noir de Mazy side tables, ca. 2010, by Gerald Kuijpers (foreground right). The silver table at center left is a 1978 hammered-aluminum console by Philippe de Hiquily. 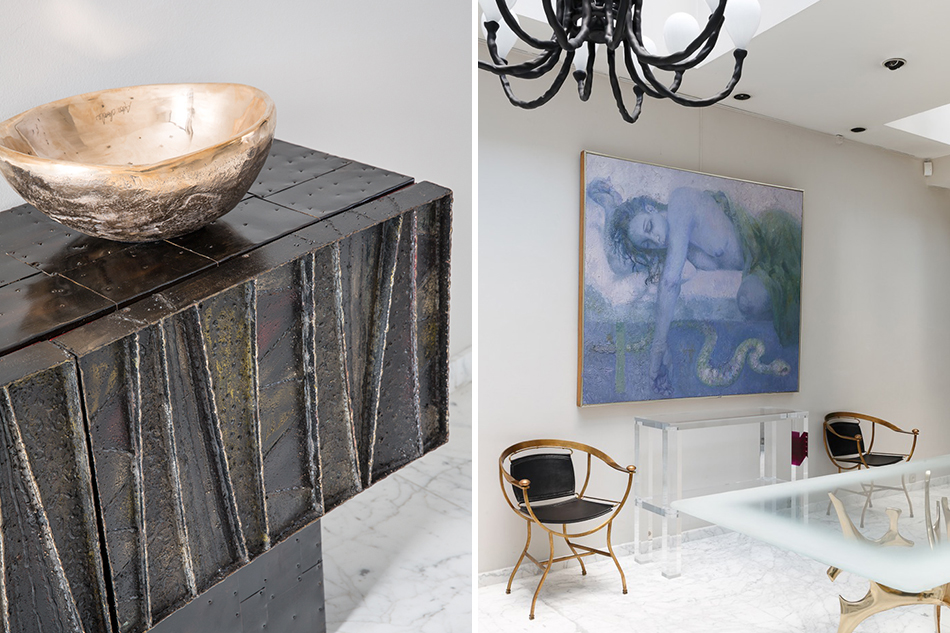 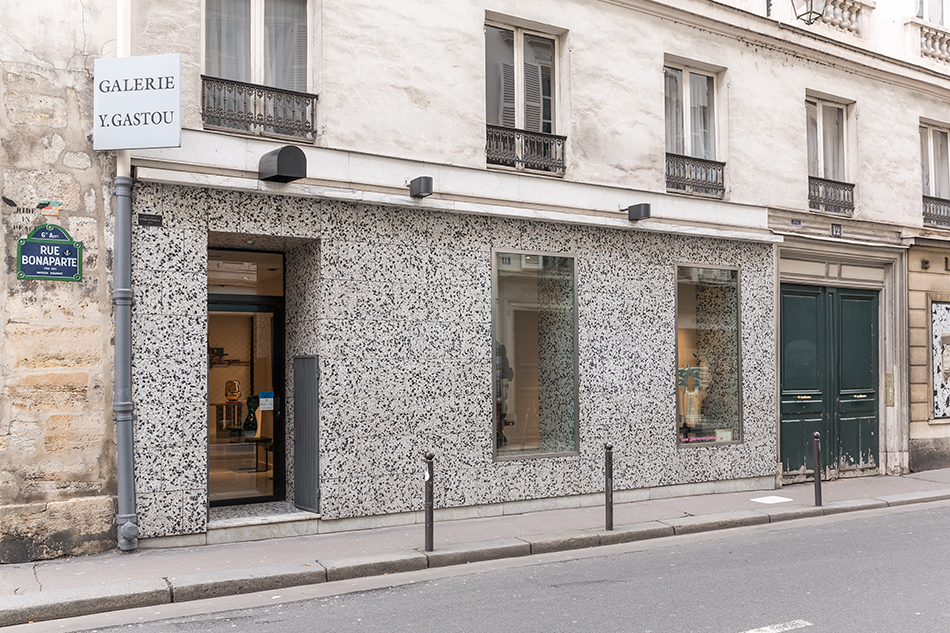 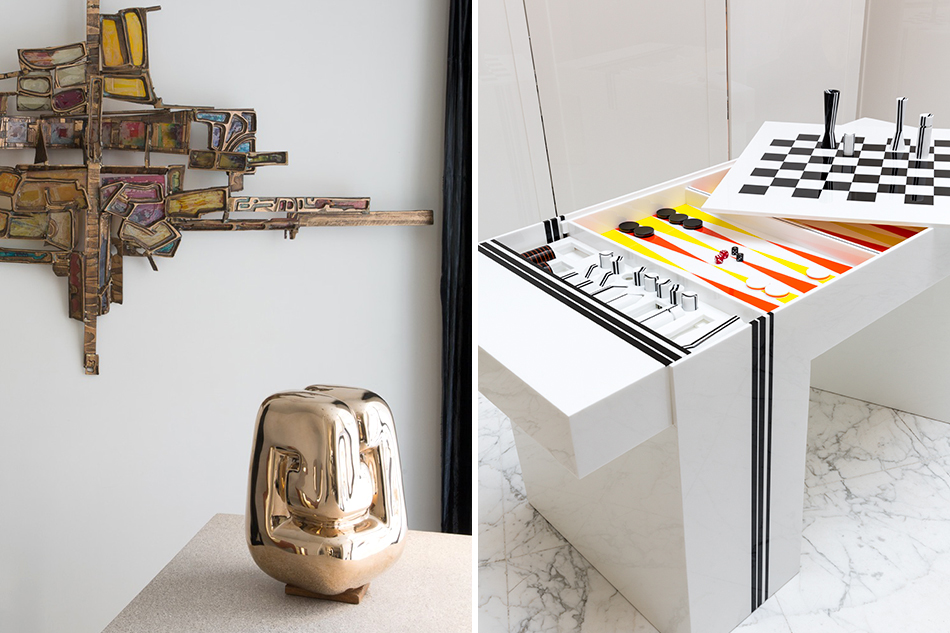 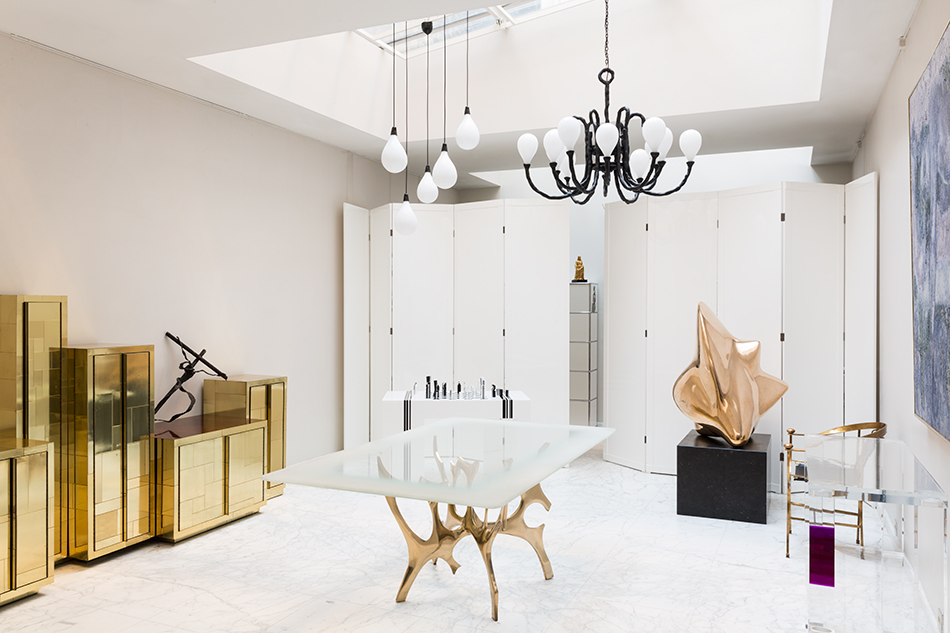 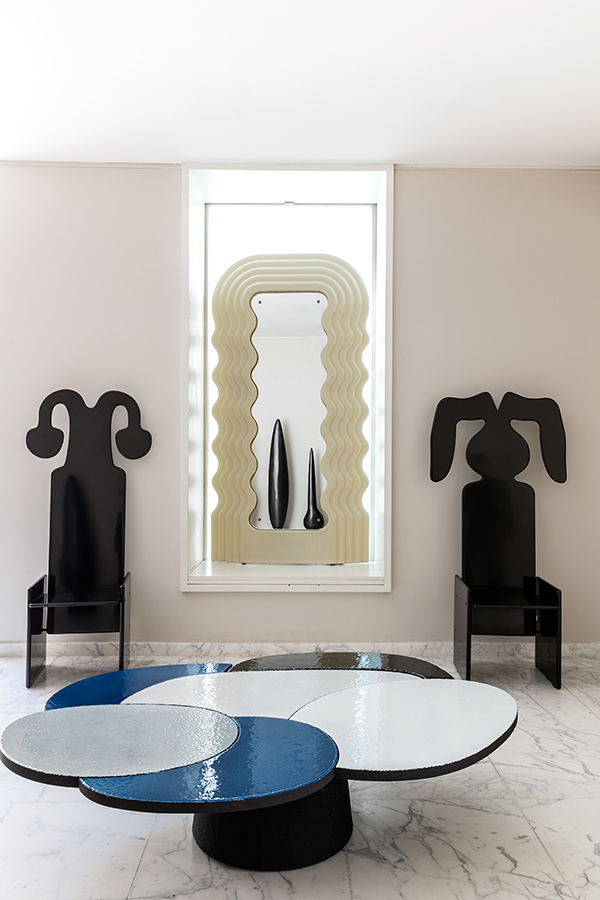 Two prototype chairs by Roberto Matta — Belier (left) and Lapin, both 1980 — frame an Ultrafragola mirror, ca. 1970, by Ettore Sottsass. Two of the sculptures in François Stahly’s “Set of Four Steles,” 1996, are seen in the reflection. Emmanuel Babled’s lava stone Etna low table, 2015, sits in the foreground.

Yves began his career at 16, with an internship at an antiques dealer, before striking out on his own, in Toulouse, in the 1970s. He started dealing in 18th-century antiques but soon got the itch to leap from one movement to another — a little Art Nouveau here, some Art Deco there, a bit of neoclassicism from the 1940s for good measure. He opened his own space on Rue Bonaparte in 1986 and organized France’s first show of some of that decade’s defining talents — Tom Dixon, the Memphis Group, Shiro Kuramata and Ron Arad — pairing them with his favorite designs from the 1940s and ’50s.

“It’s the story of our gallery — never to do the same thing all your life,” says Victor, who grew up surrounded by his father’s collectibles and joined the gallery after completing a master’s degree in international affairs at the European Business School. “If you’re a dealer and sell the same things all your life, it’s so boring. We try to find a new period or discover new stuff.”

Although father and son share a cultivated eye, they usually follow their hearts — and occasionally some dealers’ superstitions —when acquiring works to sell. “Often, the object chooses you,” Victor says. “For example, if you buy a sculpture by an artist one week, and the next week you have an opportunity to buy another similar piece by the same artist, you never say no. It’s a rule in this profession that you never break the chain. There are a lot of things like that, like you never buy green or peacock.”

The pair deals in what Victor describes as “futuristic furniture with a bit of pop” from about the 1940s through today. Their inventory ranges from works by such living artists as Gerard Kuijpers, who calls his moveable black limestone and steel sculptures “Dancing Stones,” and Emmanuel Babled, who creates biomorphic tables and lamps from such materials  as colored Murano glass and white Carrara marble. 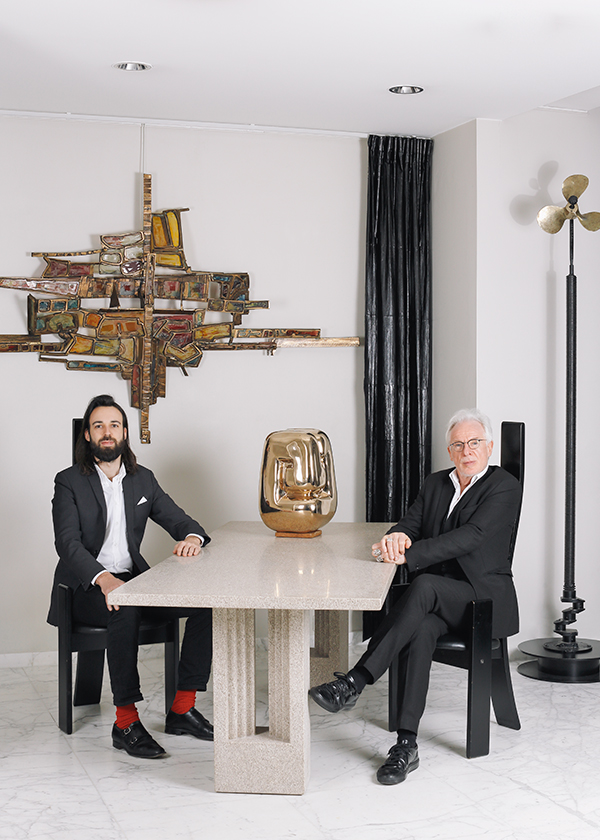 Alongside these contemporary pieces are eclectic examples of modern design: a 1975 cowhide and hammered-aluminum Coque armchair by Philippe Hiquily, a 1967 fiberglass Culbuto chair and footstool by Marc Held  and a multicolored 1970s Polymethacrylate table by Jean-Claude Farhi. In the mix are also classical touchstones, like a pair of 1950s Ico Parisi walnut storage consoles and Gérard Gallet’s 1970s black leather couch with Perspex feet. The tendency is toward items with some physical or metaphorical weight, made of materials that feel substantial to the touch. “Our style is an impossible mix,” Victor says. “When you see the pieces separately, you think, ‘That is never going to match.’ But when you see them together, you realize they work perfectly.”

The Gastous believe this is currently the strongest trend among collectors who want to live with their finds. “If you have a Picasso on your wall, you might want something that inspired Picasso, something free-form, a little bit in the round,” Victor suggests. “Find connections between the paintings and the furniture — for example, a Pierre Soulages artwork above a Paul Evans sideboard. Look at the black colors, and they relate to one another.”

Of course, not everyone is willing to do this kind of careful curation at home. “Some people just want to have a very famous artist,” the dealer says. “Others like to create a universe, a conversation between the pieces.”

The Gastous share their thoughts on a few choice pieces 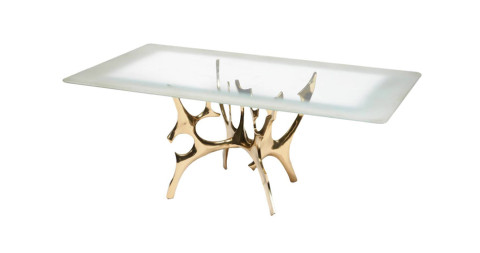 “This model is characteristic of the artist, but the sanded-glass top is quite unusual — like a cloud revealing the surrealistic, sculpted-bronze legs.” 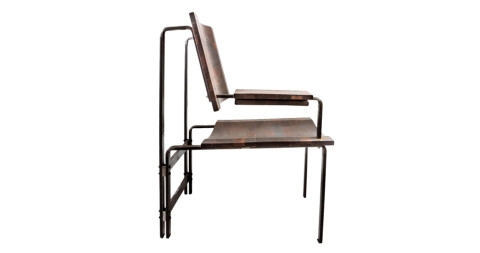 “This chair represents the pared-down architecture of Gerard Kuijpers’ works, in which the line is the most important thing and gives a real strength to the piece.” 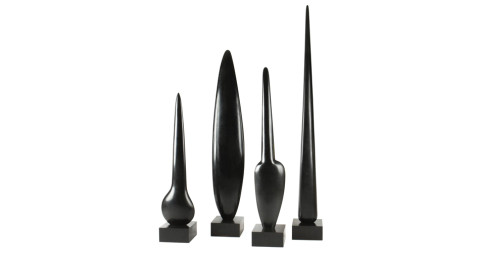 “These show the [artist’s] love for sensuality and form. The mysterious totems can be seen as African shields or chimeric animal horns.” 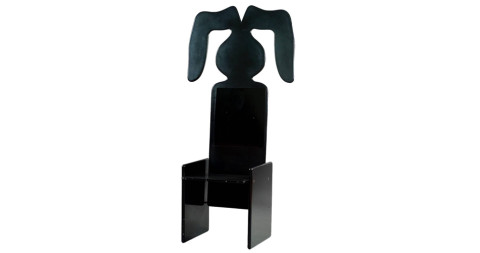 “This chair is an interpretation of a model designed by Kazuhide Takahama. It shows the dreamlike world of the sculptor-artist, always mixed with a touch of humor.” 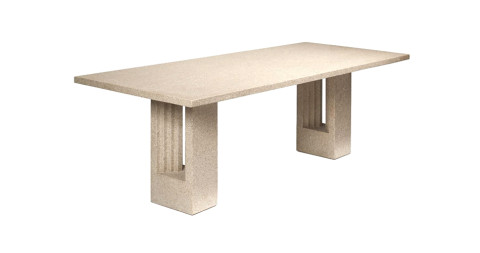 “This timeless table is an iconic example of Italian design of the ’70s. The pure drawing of the lines is typical of Constructivism.” 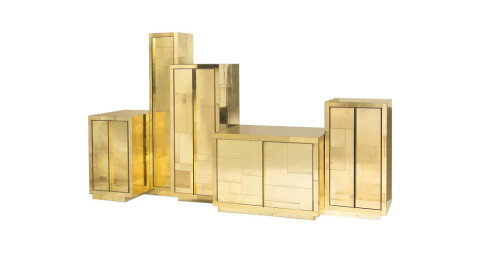 “This model is one of the prototypes Evans made for his Cityscape series. The sideboard takes inspiration from the New York skyline. The brass marquetry is like a skyscraper in the sunrise.”