The Sound and the Jewelry: Celebrating the Lesser-Known Loves of Harry Bertoia 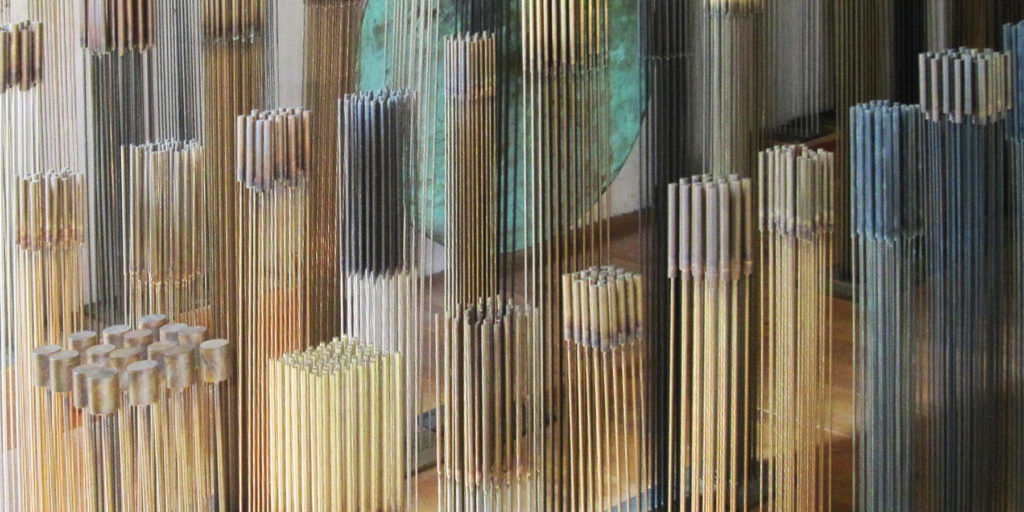 Admire the legendary furniture designer's wearable creations, and play his transfixing musical sculptures at the Museum of Arts and Design. 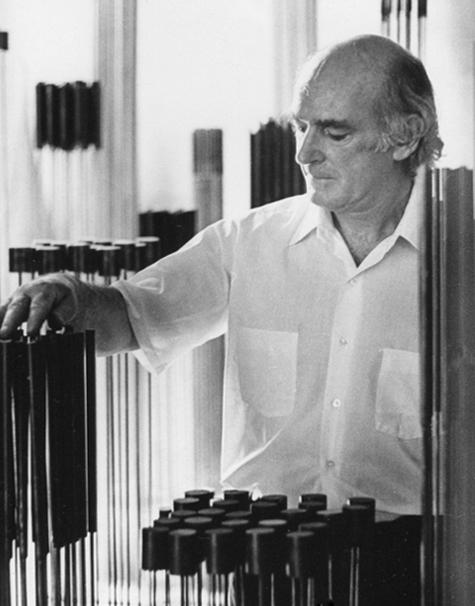 Two new shows at New York’s Museum of Arts and Design spotlight revered furniture designer Harry Bertoia‘s lesser-known creations: the jewelry he forged at the beginning of his career and the sound sculptures made in the last decade of his life. He’s seen here playing one such sculpture in 1975 (photo by Beverly H. Twitchell). Top: About 100 of these musical creations are currently housed in the late artist’s barn in Pennsylvania. Nineteen are on view at MAD (photo courtesy of Harry Bertoia Foundation).

When most people hear the name Harry Bertoia, they think of the shapely welded-wire seating he designed for Knoll in the 1950s — the Diamond, Bird, and Side chairs, and Asymmetric chaise — classics of modernist design that continue to be produced by that company.

But the Italian-born designer (1915–78) was also a prolific artist who created majestic metal jewelry, monotype prints and sculptures. His works in these mediums, appreciated in their time, are currently being introduced to new audiences in two exhibitions at New York’s Museum of Arts and Design, or MAD, through September 25.

Bertoia’s wearable art, which he made mainly for his wife, Brigitta, and his friends (Ray Eames’s wedding ring was fashioned by Bertoia), is the subject of “Bent, Cast & Forged: The Jewelry of Harry Bertoia,” organized by Shelley Selim for the Cranbrook Art Museum, in Bloomfield Hills, Michigan, where it originated. (Bertoia studied at the Cranbrook Academy in the late 1930s and early ’40s, when everyone who was anyone was a student or on the faculty there: Florence Knoll, Eliel Saarinen and his son Eero, and Charles and Ray Eames, among them.) Here, the artist is revealed at the beginning of his career through a selection of his imaginative Surrealism-influenced brooches, rings, necklaces and bracelets. Most were made while he was managing the metal shop at Cranbrook (one of the jobs he took there after graduating, in addition to teaching metalsmithing and graphic design), using scraps found in the studio. Also on display are monotype prints from the same period that show him exploring forms he would employ in his chairs and sculptures a decade later. 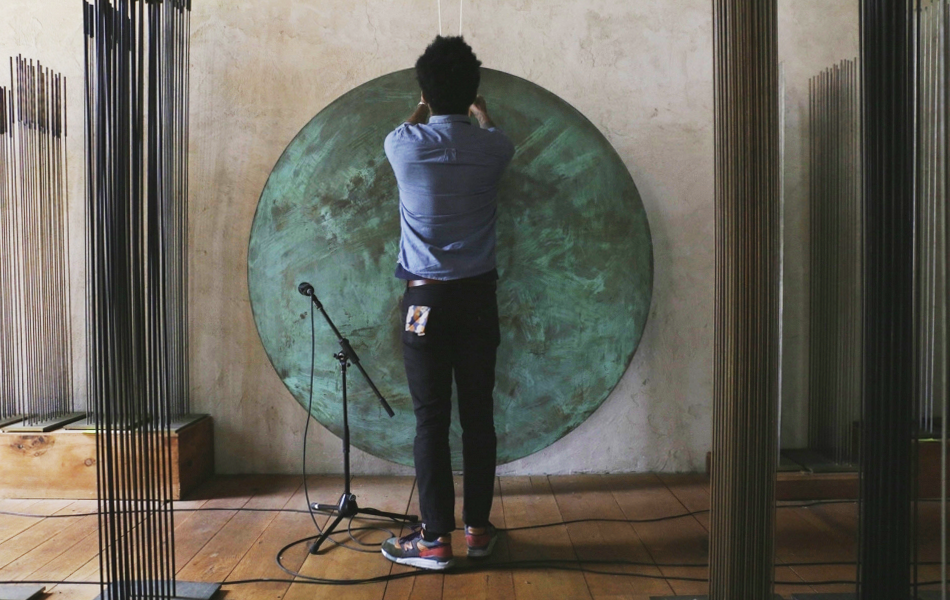 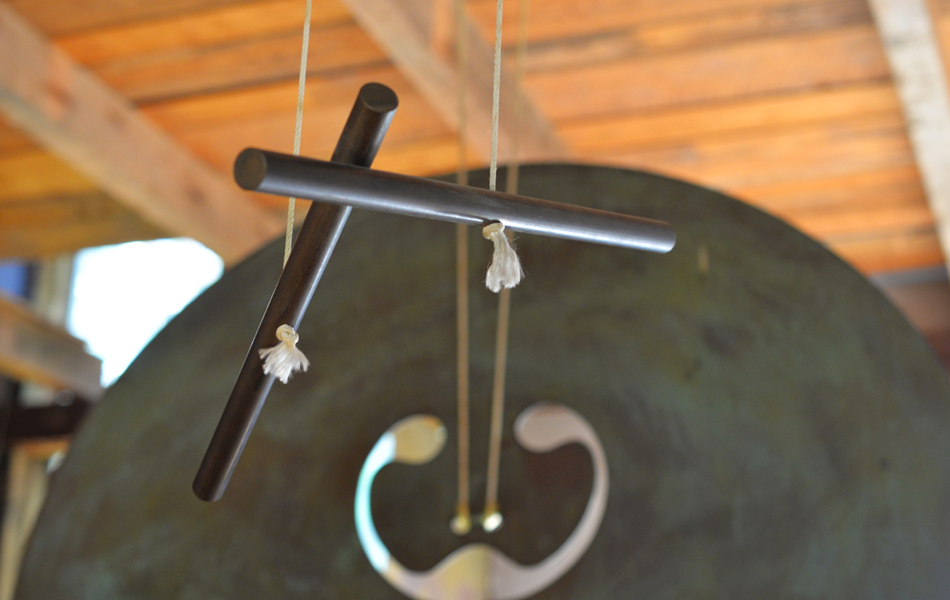 A bronze gong and a set of singing bars hang in the barn, an old stone structure the artist restored in the last two decades of his life to house his many sound sculptures. All subsequent photos in this slideshow by John Brien 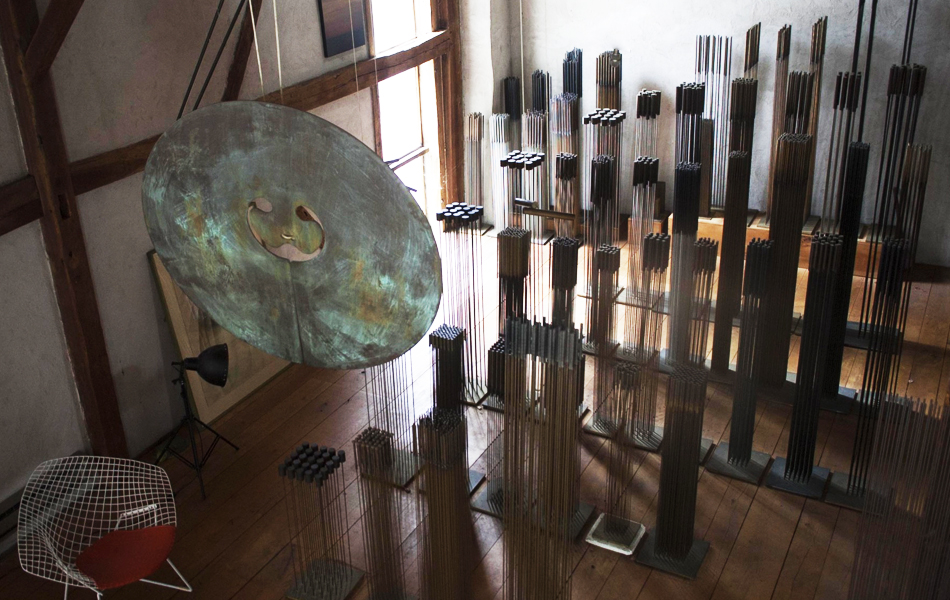 The soaring space, which also served as a recording studio, currently holds about 100 sound sculptures, although they may soon be moved to a museum by Bertoia’s daughters. 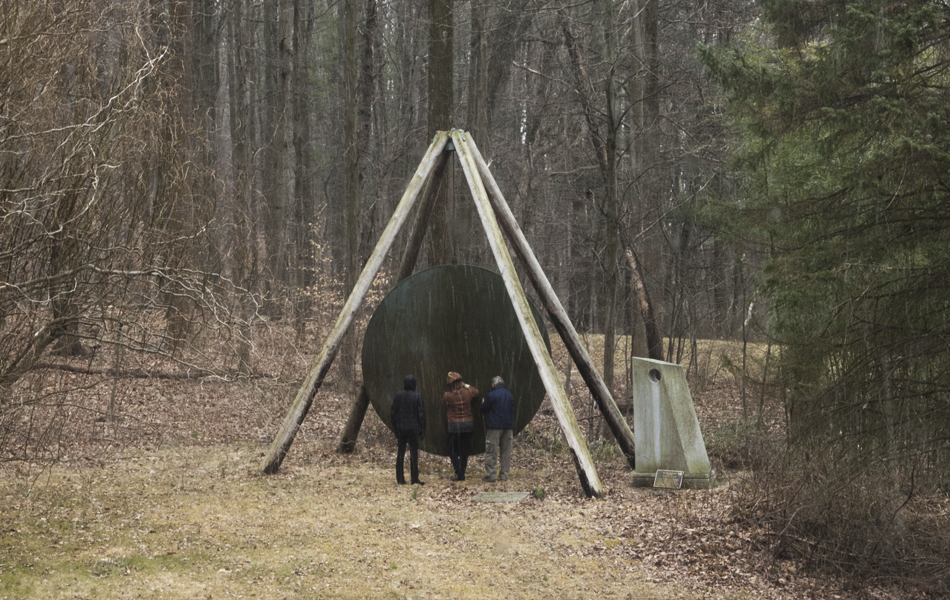 Bertoia’s gravesite in Pennsylvania is marked by a large gong. 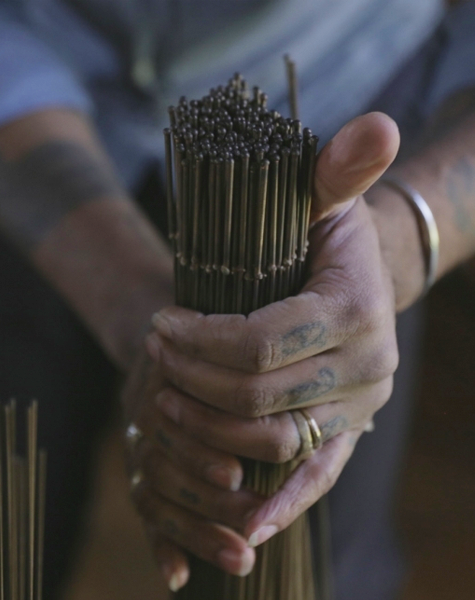 Lowe grasps the metal rods of a Sonambient work in the barn. Photo by Johann Rashid

The larger of the two exhibitions, “Atmosphere for Enjoyment: Harry Bertoia’s Environment for Sound,” organized by MAD’s chief curator Shannon R. Stratton, concentrates on the Sonambient — a term trademarked by Bertoia — sound sculptures that preoccupied him during the last 10 years of his life. The Sonambient pieces evolved in two forms: as shapely gongs of silicon bronze suspended in the air and as floor sculptures composed of dozens of beryllium-copper rods attached upright to a base. The ringing sounds they produce vary in tone according to the size of the gong or the thickness of the rods.

The more widely known of Bertoia’s Sonambient works, the floor sculptures, came first — and by chance. “Beryllium copper was an alloy used by the navy, and it was very durable,” says Val Bertoia, the artist’s son and a maker of sound sculptures himself. His father had been using copper alloys for welding for years when, in the late ’60s, Val recalls, “he ordered a shipment of beryllium copper rods from a company called Berylco, in Reading, Pennsylvania. The surprise was that it behaved so differently from the copper alloys he had used before. Instead of being soft and malleable, it was springy and strong.” According to Val, Bertoia discovered the material’s acoustic capacity when he was bending one heavy rod and it touched another and made a musical ping, piquing his curiosity as to what kind of sounds many rods close together might produce. 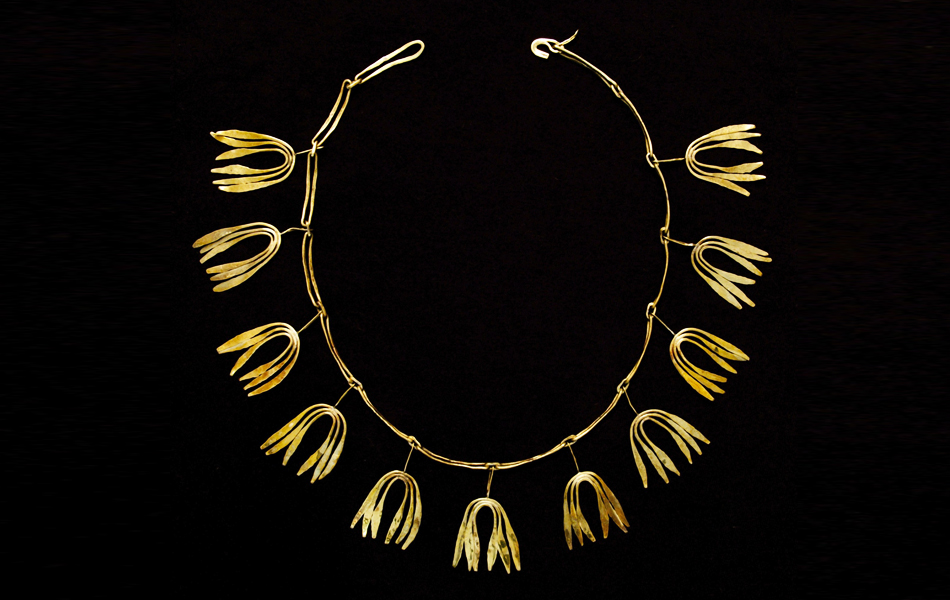 In “Bent, Cast & Forged: The Jewelry of Harry Bertoia,” the half of the two-part exhibition that originated at Cranbrook Academy, MAD visitors will discover a 1943 necklace of forged and fabricated gold created by Bertoia for textile designer and weaver Loja Saarinen, wife to Eliel and mother of Eero, whom he met at the Michigan school. 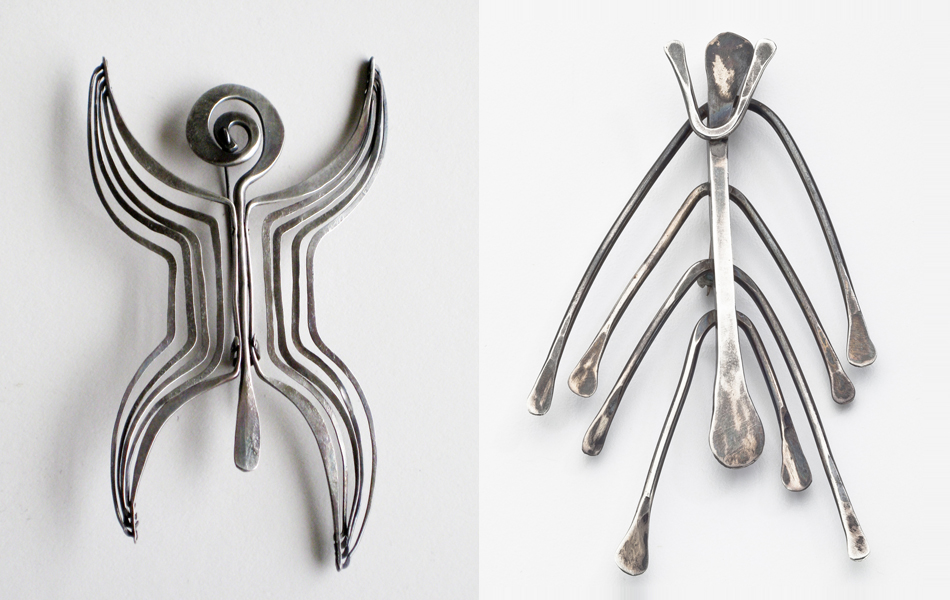 Other wearable works on view include a figurative brooch, 1946 (left), and a fishbone pendant, ca. 1940, both in forged and riveted sterling silver. 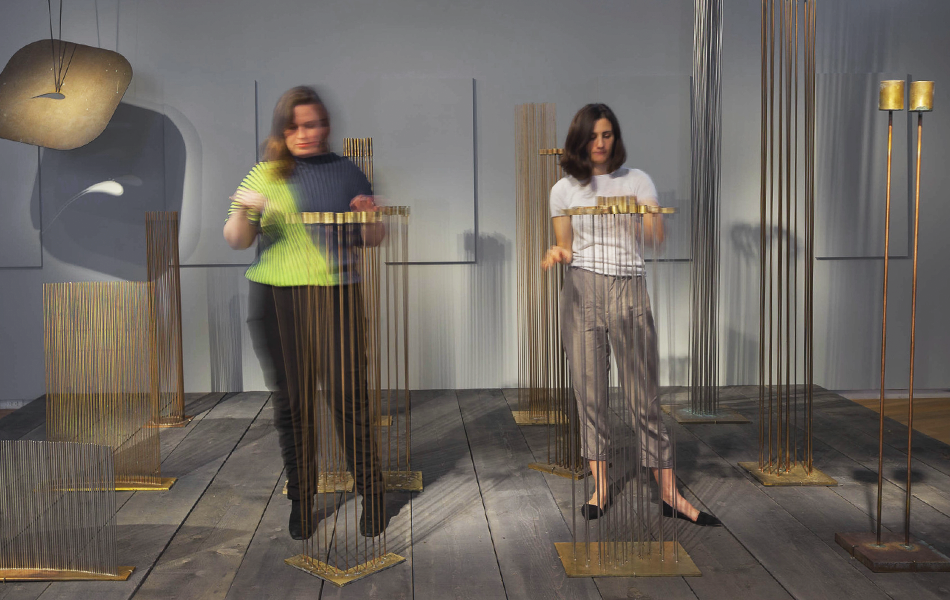 In the aurally focused “Atmosphere for Enjoyment: Harry Bertoia’s Environment for Sound,” visitors can play the 19 instruments in an installation, arranged to evoke the Sonambient Barn, on Thursdays between 6 and 9 p.m. and Saturdays between 12 and 3 p.m. Photo by Butcher Walsh, courtesy of the Museum of Arts and Design 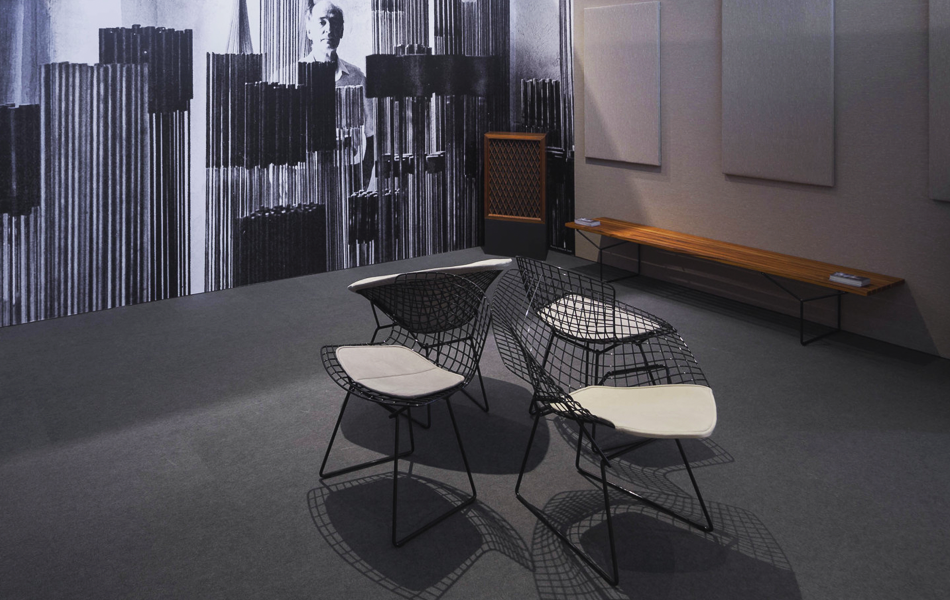 Bertoia’s familiar welded-wire furnishings, including the Diamond and Side chairs seen here, are displayed amid sculptures, photographs and sound recordings. Photo by Butcher Walsh, courtesy of the Museum of Arts and Design 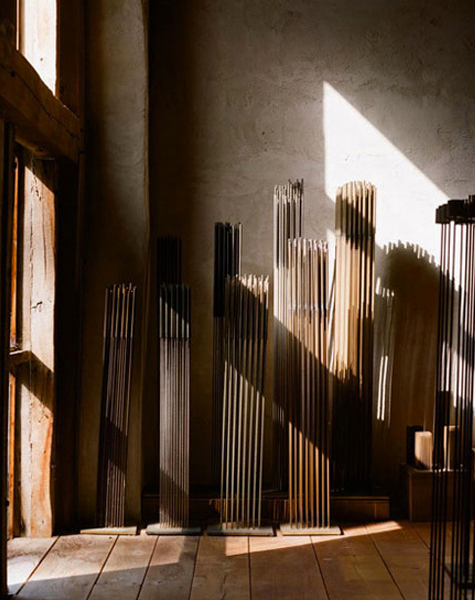 A collection of sculptures in the southwest corner of the barn conveys a spare, industrial beauty, even when still. Photo courtesy of Harry Bertoia Foundation.

“He understood what sounds different metals would bring,” says James Elkind, owner of Lost City Arts, a Manhattan-based gallery specializing in mid-century art and design. “Some sound sculptures are high-pitched, some are sonorous, and they stay in motion for long periods of time.” Elkind says he began to educate himself about the artist about 12 years ago, “after hearing people quietly talking about Bertoia.” His first purchase was a “Willow” sculpture (not a sound piece) at Rago Auctions, in Lambertville, New Jersey. “I think I paid ninety-five thousand dollars, which was a lot for me at that time, and I brought it to the Modernism Show [in New York] and sold it for more. That not only told me there was a market for his work but that people were moved by his art. His works affect people in an elemental way.”

In early June, Val played one of the last concerts on his father’s Sonambient sculptures in an outbuilding, called the Sonambient Barn, behind the family farmhouse. (A lawsuit filed by Val’s two sisters arguing that they should take possession of their share of their father’s sound sculptures was recently settled in their favor, and they hope to eventually place them with a public museum.) Val will be moving his own sound sculptures into the barn over the next few months and plans to continue his concerts as well his tours of the family property and of the Bertoia Studio in the nearby town of Bally, where he maintains a storefront museum dedicated to his father.

As Val moved in a balletic manner from sculpture to sculpture in the barn, pressing rods together with his hands and releasing them, or tapping a gong with a mallet, he created eerie sounds that continued to reverberate from each work— an ongoing musical composition of various tonal vibrations that was alternately reminiscent of church bells, chiming clocks and cymbals. It was easy to imagine the pleasure his father must have experienced in this light-filled, open space, surrounded by music of his own making. 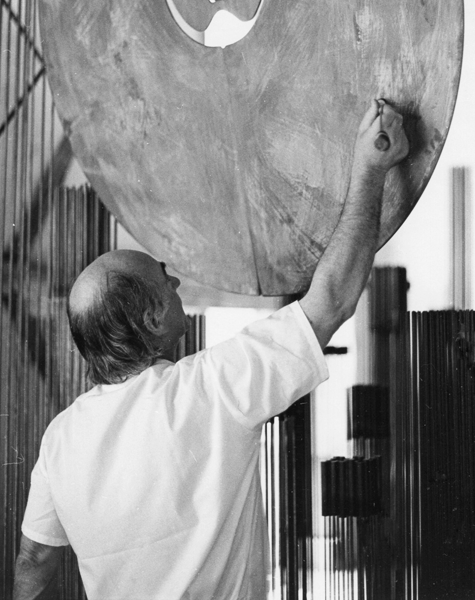 Bertoia plays a bronze gong with an implement of his own creation in the barn, ca. 1975. Photo by and courtesy of Beverly H. Twitchell

The MAD exhibition has replicated the barn’s setup on a smaller scale with an installation of 19 sound sculptures made by Val. Museum visitors are encouraged to play them (under supervision) on Thursdays between 6 and 9 p.m. and on Saturdays between 12 and 3 p.m. The rest of the time, a four-channel sound installation that draws on Bertoia’s archive of recordings plays throughout the galleries, simulating the concerts he held in his barn. (Bertoia’s recordings were recently digitized and released in an 11-CD box set).

In 1971, Jeffrey and Miriam Eger, then recent London Film School graduates living in New York, agreed to document Bertoia at work. The resulting impressionistic film, Sonambients: The Sound Sculpture of Harry Bertoia, currently on view at MAD, combines footage of the artist playing his sculptures with video of pine needles and other natural forms in the surrounding landscape that share physical similarities with his creations.

In an interview with Jeffrey, Bertoia said he liked to think his Sonambient creations were inspired by the sounds of metalworking he delighted in as a child, made by gypsies who came to his town of San Lorenzo, Italy, to repair the locals’ pots and pans. “The pounding of the hammers and the shining of the metal made a great impression on me,” he said. “It may not be what I’m doing here, but I like to think that it is.”