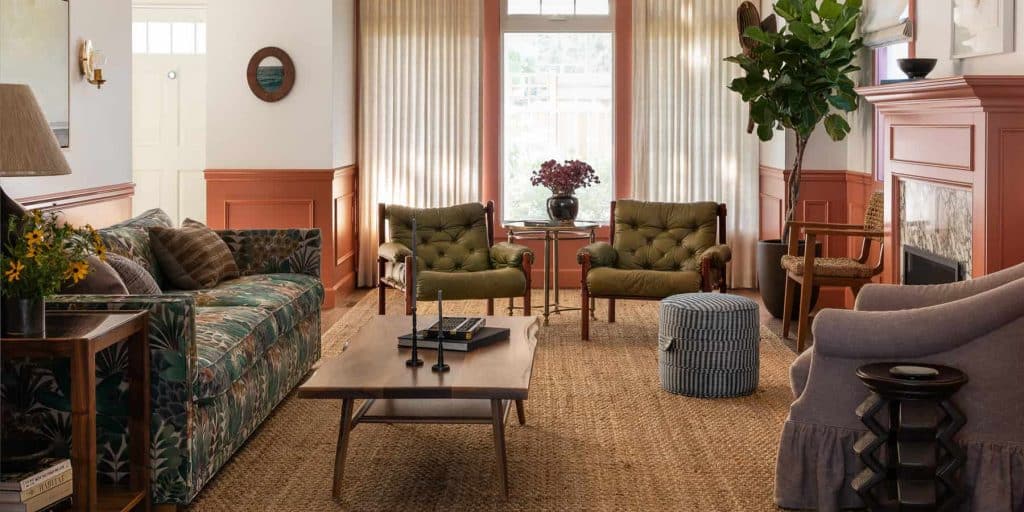 Thanks to her dusky palette of warm and cool hues, as well as her appealing social media presence, this rising star is winning commissions well beyond the Pacific Northwest.

April 11, 2021In 2014, after Heidi Caillier moved her interior design practice from San Francisco to Seattle, she noticed that her work had become moodier. California clients often wanted white-on-white rooms, which she was happy to provide. In Washington, with its often-cloudy skies, white didn’t work as well. “Stark white in a gray environment can be very depressing,” she says. The right colors, by contrast, “can feel like they’re embracing.”

In choosing them, she learned from the Brits, whose weather is a lot like Seattle’s and who have a long history of layering color on color, pattern on pattern. Rather than go vividly polychromatic, she gravitated to colors with dusky undertones, which, she says, “keep them from looking garish.” (Not surprisingly, the British firm Farrow & Ball provides many such hues.)

There were other differences between her clients in California and in Washington. The latter are rarely showy; in Seattle, even monied families often live in older houses that they have no plans to enlarge, much less replace. (It’s not just about taste; often they’re environmentalists who’d rather work with what they’ve got than start anew.) The houses’ relatively compact rooms challenged Caillier, but she soon became expert at creating interesting mixes of furniture without crowding.

Seattle also has far fewer interior designers than San Francisco, Caillier believes, which meant there was room for her to find clients even as a newcomer to the Pacific Northwest city. And then, she discovered that Instagram could help.

Five or six times a week, Caillier posts an image of one of her own projects or, occasionally, a project by a designer she admires (among them, the Brits Ben Pentreath and Rita Konig). Caillier now has more than 100,000 followers on Instagram, and some 90 percent of new projects come to her through the app.

Along with the photos, she posts charming but pointed commentary on design:

“Can we talk about the loveliness of pale pink rooms?”

“The client told me yesterday that he feels like they don’t deserve bathrooms like this. (They definitely do. We all do!)”

And she uses hashtags, including, most frequently, #cozy. That word, she says, best describes much of her work, including a small 1915 carriage house in Seattle’s Capitol Hill neighborhood.

Her clients had raised two children there; now empty-nesters, they decided to treat themselves to a new look. But the building envelope wasn’t going to change. “We wanted to respect the history,” Caillier explains.

As for the interiors, she says, “the architecture is so pretty, so quaint, that I knew to keep the decor simple.” An African Tuareg rug sets the stage for the living room’s mix of vintage pieces, including a rope chair by Bauhaus designer Erich Dieckmann, from Artibus. She came across it while “browsing 1stDibs on a Saturday morning, as I often do.”

The finished room doesn’t feel overdone, but it’s not sparse either. “Looking at it for the first time,” Caillier says, “you might wonder, ‘Did they have a decorator?’ Which is exactly how it should be.”

The dining room is a pass-through, connecting the living room to the kitchen, which made having a profusion of furniture impractical. Caillier designed a pair of built-in corner cabinets with rounded profiles, so they’re easy to get past. The cabinets serve as pedestals for lamps and vases. “The room seemed very empty without those things,” she says.

She painted the kitchen cabinets and walls the same color, Farrow & Ball’s French Gray, to unify the room, and she chose almost-utilitarian fixtures from Urban Electric — “I didn’t want to do anything too decorative.” In the house’s only bathroom, Caillier added a new pink vanity with large curved corners. The client “refers to it as the little pig,” she says approvingly.

Caillier took on an even smaller project in Seattle’s Ravenna neighborhood, where a couple asked her to redo their two bathrooms. “Some designers will only do whole houses,” she says. “I’m not that designer.”

The bathrooms were petite and poorly laid out; Caillier found ways to enlarge them and dress them up. She also ended up redoing the couple’s bedroom, to which she added a nook with a raised-eyebrow-shaped banquette. “You want to spend all morning there with a cup of coffee,” she says. Throw pillows in rich shades contrast mightily with the large beige-linen-covered cushion.

One of her bigger Seattle jobs was renovating a house in the Seward Park neighborhood. That place, she says, was “dated — totally livable, but a builder-grade extravaganza.” Although she didn’t move walls, Caillier says, “we touched every single surface in the house.” The client, she says, “loves color, she loves pattern, she likes the mix of modern and traditional.”

That mix is most apparent in the living room, where Caillier paired wood-framed mid-20th-century tufted-leather Arne Norell chairs from MORENTZ with a more classically styled skirted custom armchair and sofa from Nickey Kehoe.

For the kitchen, Caillier chose dark brass accessories that complement the cabinets, which she had painted olive, and for the backsplash, she picked BDDW tiles that create a kind of birds-and-branches mural. In the dining room, the only thing as dazzling as the walls painted Farrow & Ball’s tomato-y Red Earth is a shimmering chrome chandelier by Stuart Barnes, which Caillier bought from dealer Porter & Plunk.

Per the client’s request, colors and patterns permeate the house. A mudroom is lavender. Upstairs, the walls of the main bedroom are covered in grasscloth, against which Caillier placed a woven-cane headboard. The main bathroom has a riot of veining, thanks to a Waterworks marble tile called Prunella. The basement, where the kids spend much of their time, is outfitted in a pale green version of House of Hackney’s whimsical Zeus wallpaper, which depicts cranes on feathery weeping willow trees. The laundry room is mustard yellow.

The appearance of all these photogenic rooms on Instagram keeps Caillier’s phone ringing. And thanks to social media’s reach, nearly half of her new clients are nowhere near Seattle.

She’s currently at work on the interiors of a New York City townhouse, as well as homes in Connecticut, Upstate New York and Philadelphia.

“There are some building sites you absolutely have to see,” she says of her work on projects far from home. In other cases, she can do the job without visiting. When she doesn’t make the trip, she finds that “it’s amazing what you can get done with phone calls, emails and a great set of plans.” She hires professionals to measure everything.

“Stark white in a gray environment can be very depressing,” says Caillier. The right colors, by contrast, “can feel like they’re embracing.”

An avid 1stDibs shopper, she’s become adept at buying furniture she has never actually touched, she says, by learning to ask dealers the right questions: “What is the back like? Is there any wear and tear on the top? Can I see more pictures from that angle?”

Caillier, whose father was an army chaplain, lived in many places as a child. She went to Rhode Island’s Providence College, then enrolled in graduate school at Tulane University, earning a master’s degree in public health. Next, she headed out to San Francisco, where she took jobs at a few small design firms and a furniture showroom. “I always liked decorating but really got into it when I moved to SF,” she says.

She opened her own office in 2014. But within a year, she and her husband decided they wanted to raise their children in his native Seattle. So, the couple moved north. Still, Caillier has maintained ties to the Bay Area, where she currently has three large projects. Even there, she says, people are increasingly looking for more color, more layering.

Thanks to designers like Caillier — and the reach the Internet gives them — the layered, dusky look is catching on. 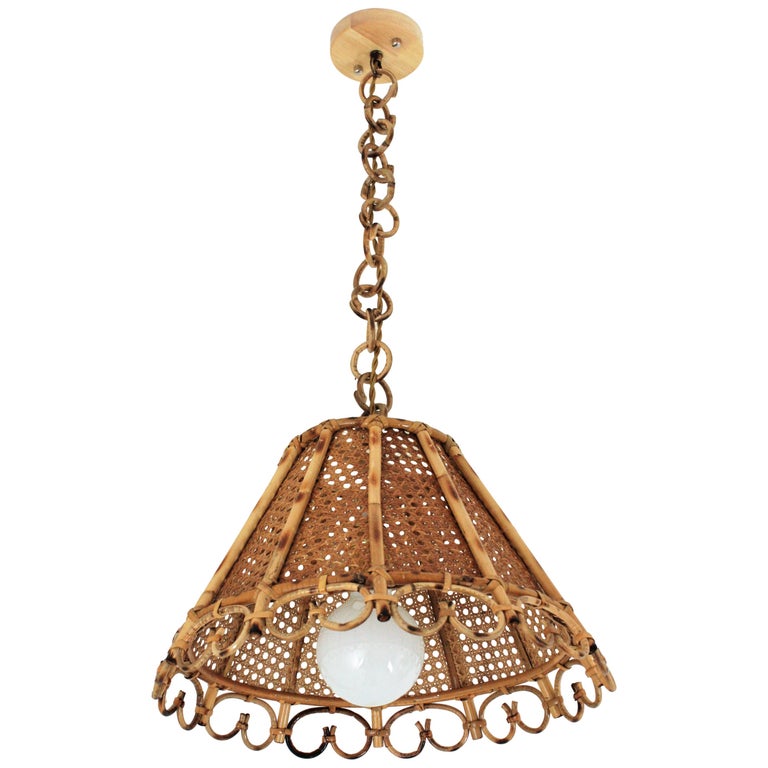 “The shape of this rattan fixture is really pretty, and the scale is great for a kids’ bedroom. I love the little scallop detail at the bottom.” 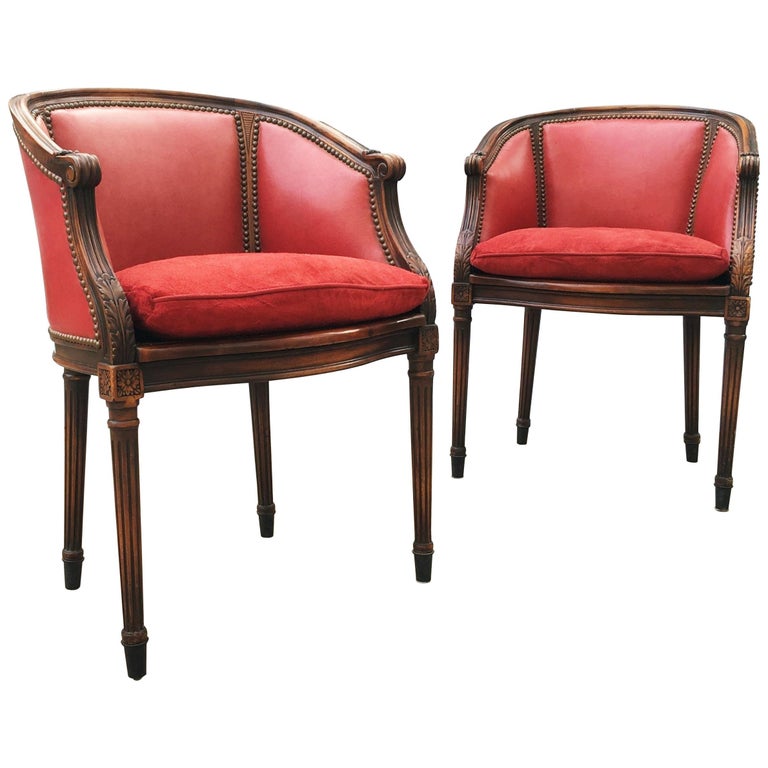 “I love these petite chairs as places to sit and put your shoes on, or just to chat. We’d take off the nailheads and reupholster them in a printed fabric, and they’d look great next to consoles or dressers.” 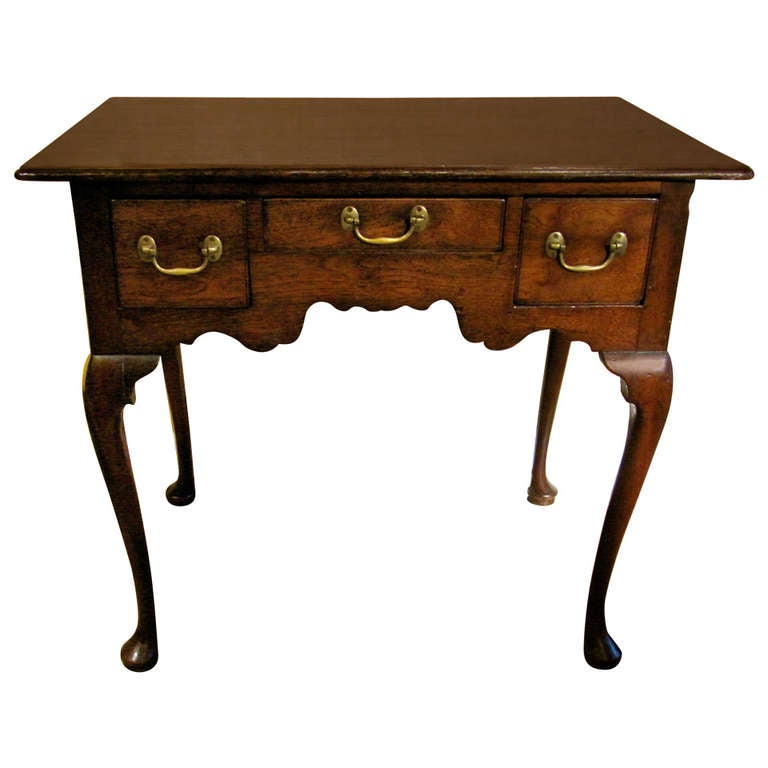 “You can never have too many vintage side tables, because you need them all the time. There’s one in almost every room I design.” 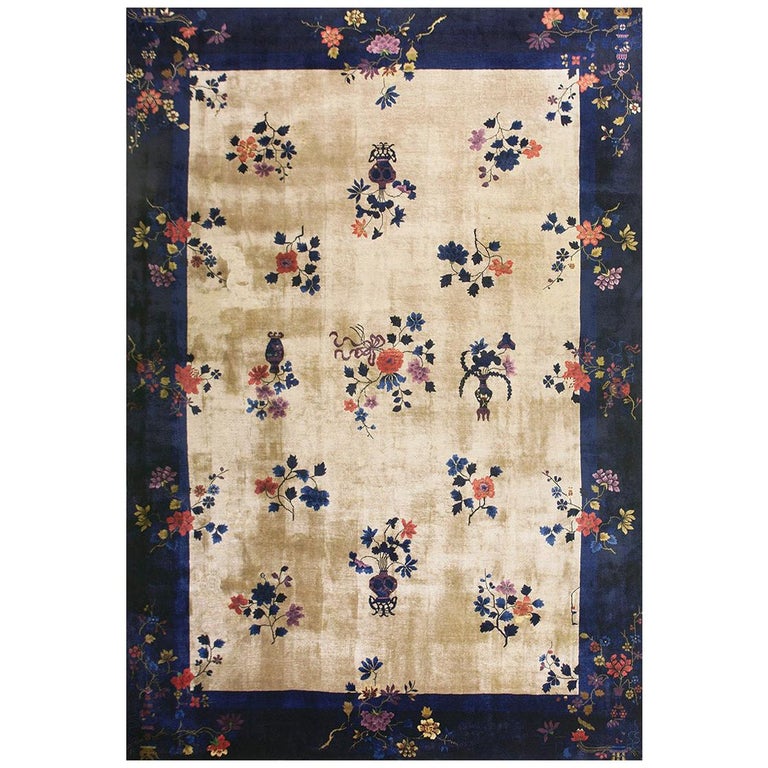 “I’m super into these Art Deco rugs right now. They feel unexpected, and the bright colors are beautiful. It’s fun to mix them in with smaller-scale prints.” 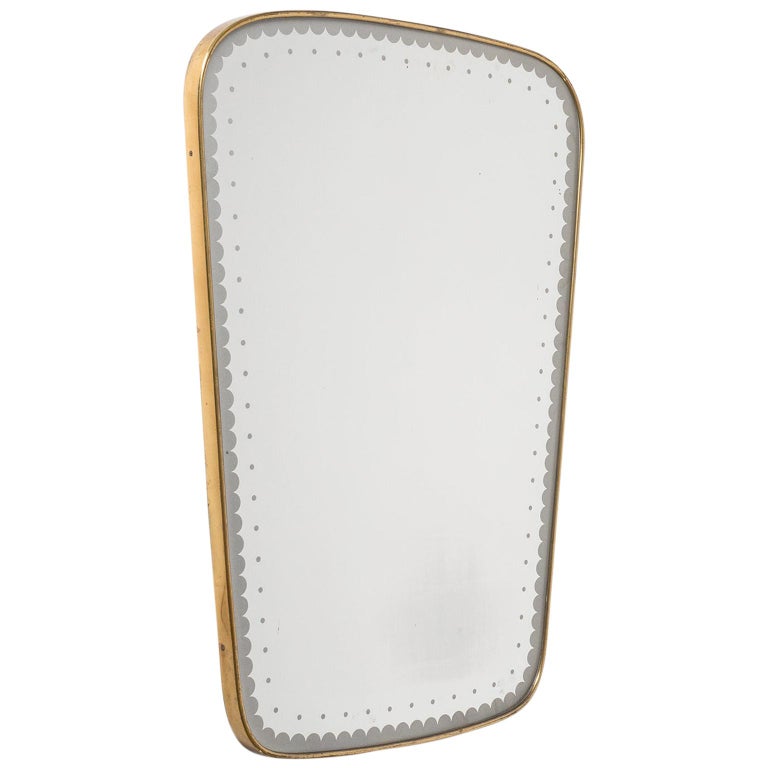 “I love these mirrors for powder rooms. This one has a really nice patina on it and a great little scallop-and-dot detail around the edge.” 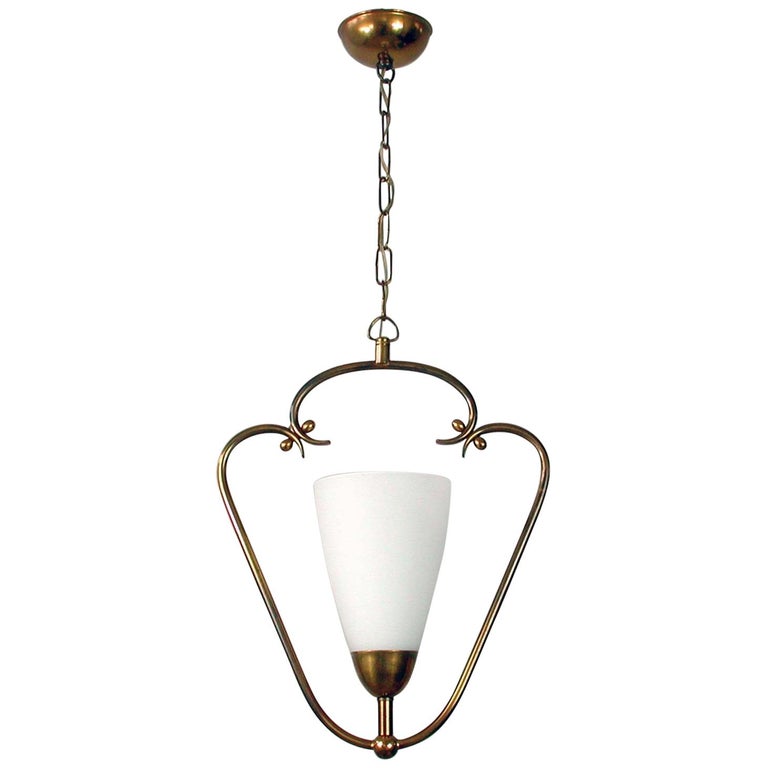 “These Swedish lanterns are really small but very sculptural. They’d be great for a little entry or over a bathtub, as a kind of statement piece that doesn’t feel too large.”