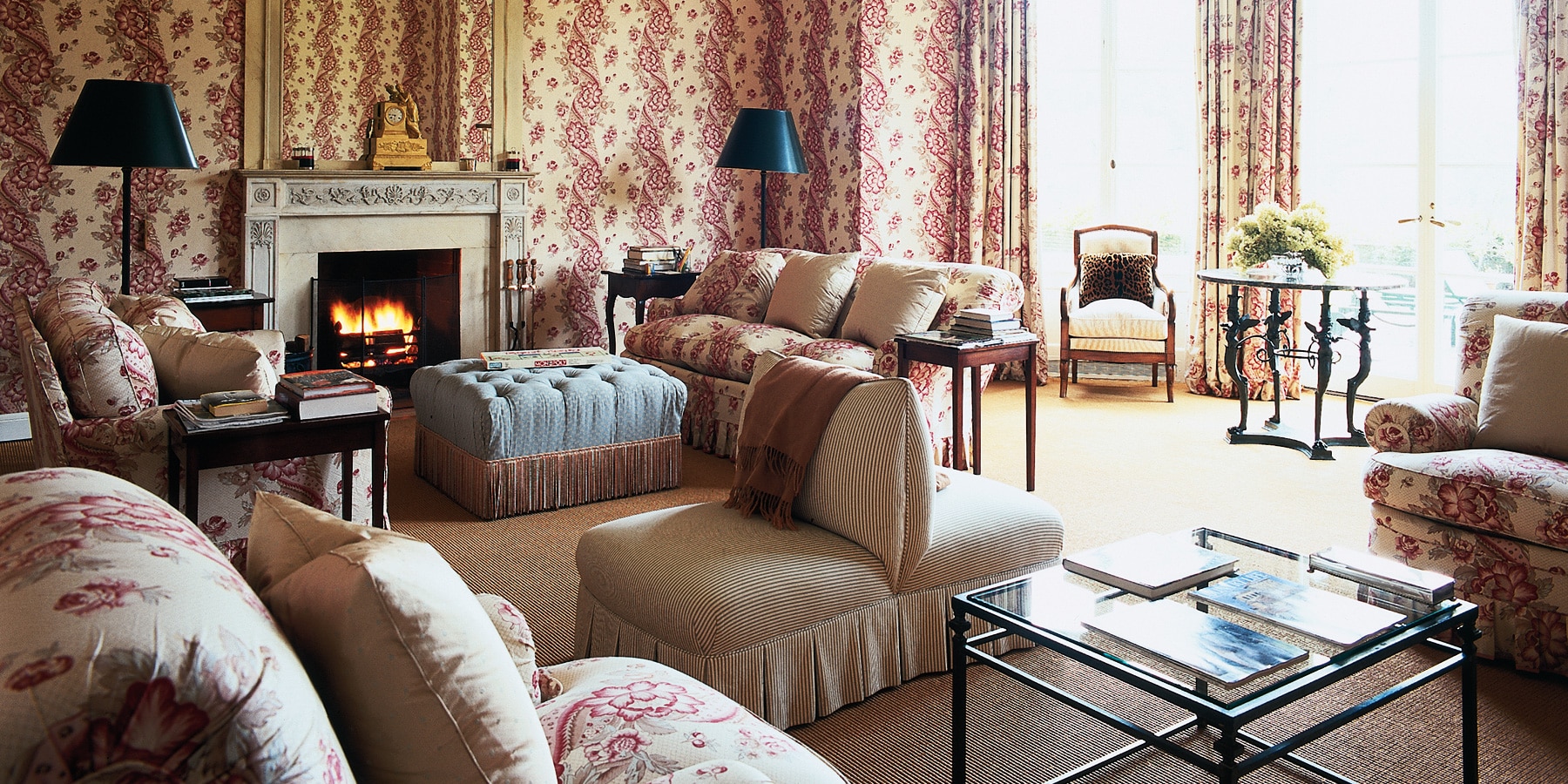 Henri Samuel's exclusive clientele and projects demanded such discretion that only now is he getting credit for his iconic interiors. 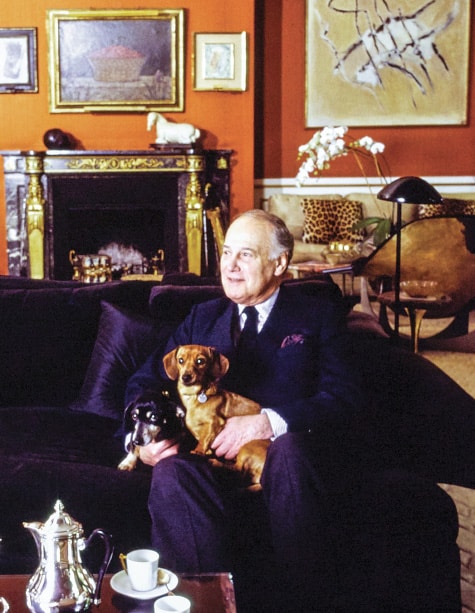 Henri Samuel, photographed at age 80 with two of his beloved dachshunds in his Paris home (photo courtesy of the estate of Karen Radkai), is the subject of a new book by the design and art dealer Emily Eerdmans. Top: Samuel’s extensive use of a printed toile makes a visual impact in the sitting room of an Oyster Bay Cove, New York, country house (photo from a private collection).

Although Henri Samuel is still revered in his native France and among a select international set of design cognoscenti, most people have never heard of the late master decorator. His clients, on the other hand, rank among the 20th century’s most boldfaced names, including Gianni Agnelli, Doris Duke, Valentino and Rothschilds galore. Trusted by the Palace of Versailles, no less (as consultant on the restoration, first, of the Empire Rooms, in 1957, then of the Grand Trianon), Samuel (1904–1996) was arguably the very last interior designer trained in the French tradition dating back to the ancien régime, with its special knowledge and methods.

It was about a decade ago that I first learned about Samuel — and his importance — from eminent French designer Jacques Grange, whom I was interviewing for my book on the eccentric antiquaire Madeleine Castaing. When I told Grange I had heard that he worked for the diva as a young man at her rue Jacob shop, he quickly corrected me: “Oh no,” he said, “it was Henri Samuel I most wanted to work for when I began my career.”

As a New York–based design historian and gallery owner whose love of the decorative arts and pursuit of connoisseurship germinated in my post-college years living in Paris, I was instantly intrigued by the prospect of learning more about this towering figure who had somehow evaded my notice. I soon came across a photograph of Samuel’s own fiery orange-red grand salon, first decorated in 1976. If you have heard of Samuel, it is most likely because of this electrifying room in his Paris apartment on the rue du Faubourg Saint-Honoré. Here brass, bronze and acrylic sculptural furniture, commissioned from such contemporary artists as César, Philippe Hiquily and Guy de Rougemont, joltingly resided in an otherwise high-style classic ensemble. 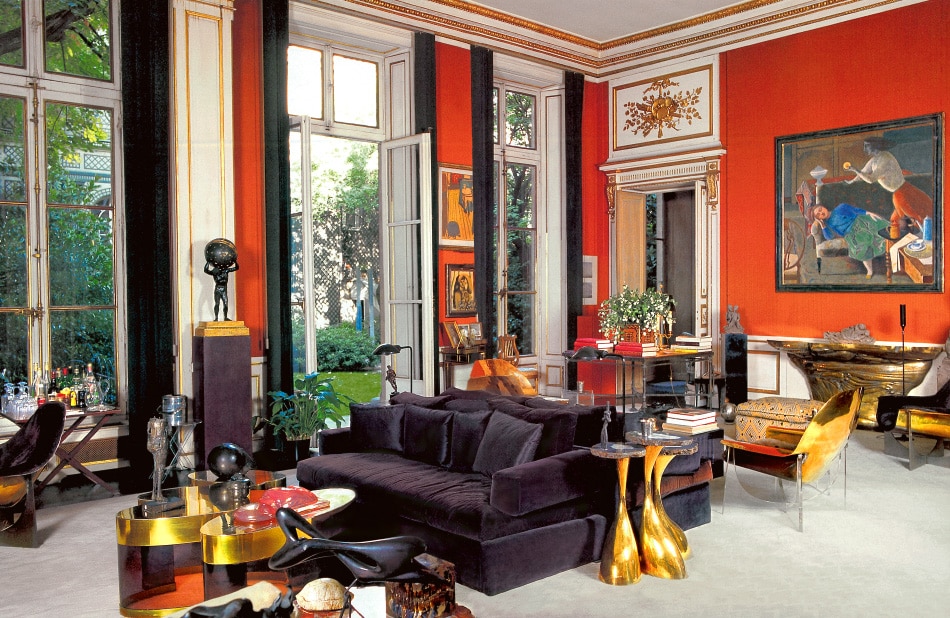 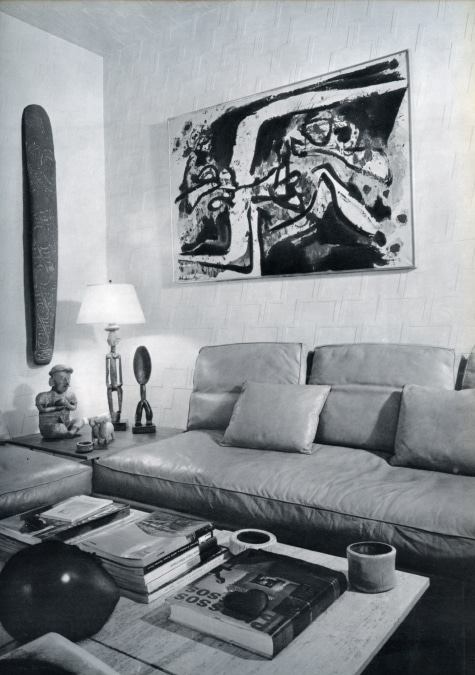 Samuel’s fumoir, shown in this ca. 1963 photo, featured a molded plastic wallcovering, which provided a contemporary backdrop for a work by Pierre Alechinsky and a collection of primitive objects. Photo © 1966 Les Éditions des Condé Nast S.A.

The key to the success of the space is that Samuel eschewed a stark modernistic approach in which important pieces are presented as in a museum. Even though the salon emphasized contemporary art and design, it wasn’t a showcase. This was a room for living and entertaining, where warmth and comfort are essential. Samuel covered the existing boiseries in Pompeian-red silk, which reined in the sprawling dimensions of the room, and he placed back-to-back grayed-black velvet sofas in the center to create multiple seating groups. A table for every drink, pools of light where needed and the delicate scent of flowers rounded out a highly personal decor.

Interest in Samuel’s commissioned furniture has exploded over the past several years, as evidenced by the 2014–15 exhibition “Paris Match: Henri Samuel and the Artists He Commissioned” at the New York gallery Demisch Danant and Galerie Yves Gastou’s reedition of several Philippe Hiquily pieces first commissioned by Samuel. It was around this time that I received an email from Charles Miers, the publisher of Rizzoli, with whom I had worked on the Castaing project. “What about a book on Henri Samuel?” he asked. The result of that query — Henri Samuel: Master of the French Interior, the first-ever monograph of the master’s oeuvre — has just been published.

One of my first points of contact was Samuel’s niece Eva, an architect and urban planner who, like her uncle, received the Legion of Honor for her design work. She was astonishingly supportive of the book project, sharing stories about both her uncle’s career and the family’s background. Although the Samuels were a prosperous Jewish family with established branches throughout Europe, Henri had to make his own way financially after his father lost a fortune in the Stavisky Affair of 1934, a Madoff-like pyramid scheme that rattled the country. Henri and his two siblings, Manon and Édouard, had enjoyed a luxurious childhood, wintering in the Alps and summering in Nice. His maternal grandmother, Hélène, was an antiques dealer and proved a defining influence, taking the young Henri to auction houses and on other shopping expeditions. At the age of 16, he departed for New York for a two-year banking internship. Upon returning to Paris, he spoke perfect English — and knew that interior decoration, not banking, was the career he wanted to pursue. 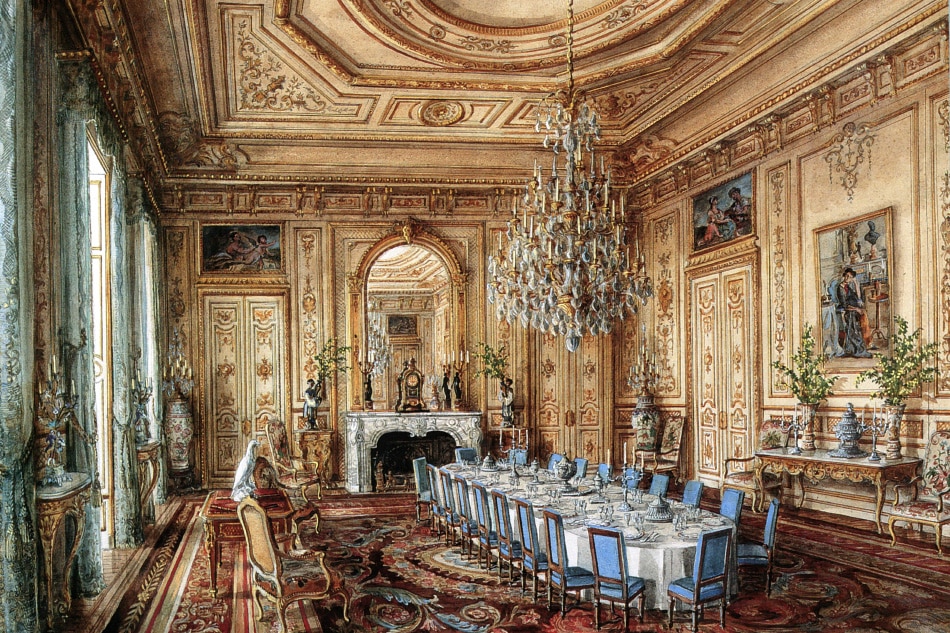 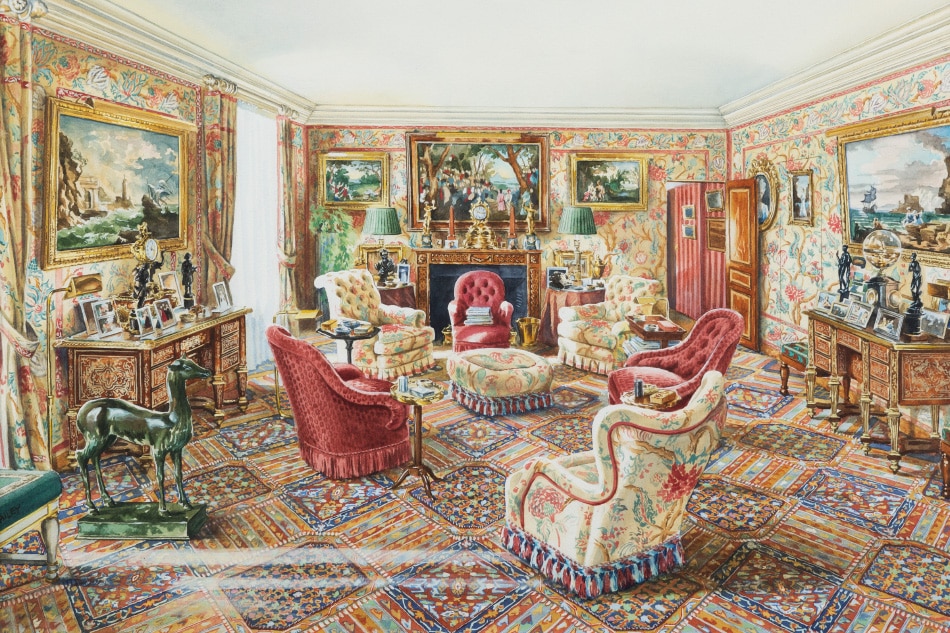 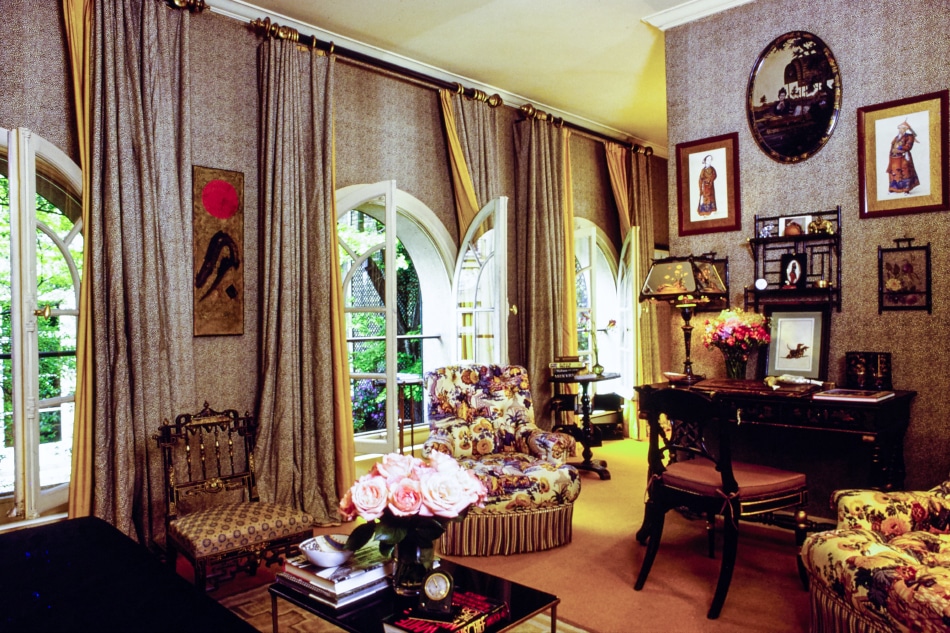 In Samuel’s Paris bedroom, Georges Le Manach’s Plumettes fabric was used for the walls and curtains. As in his bedroom in the country, chinoiserie touches, such as the black japanned furniture, abound. Photo courtesy of the estate of Karen Radkai 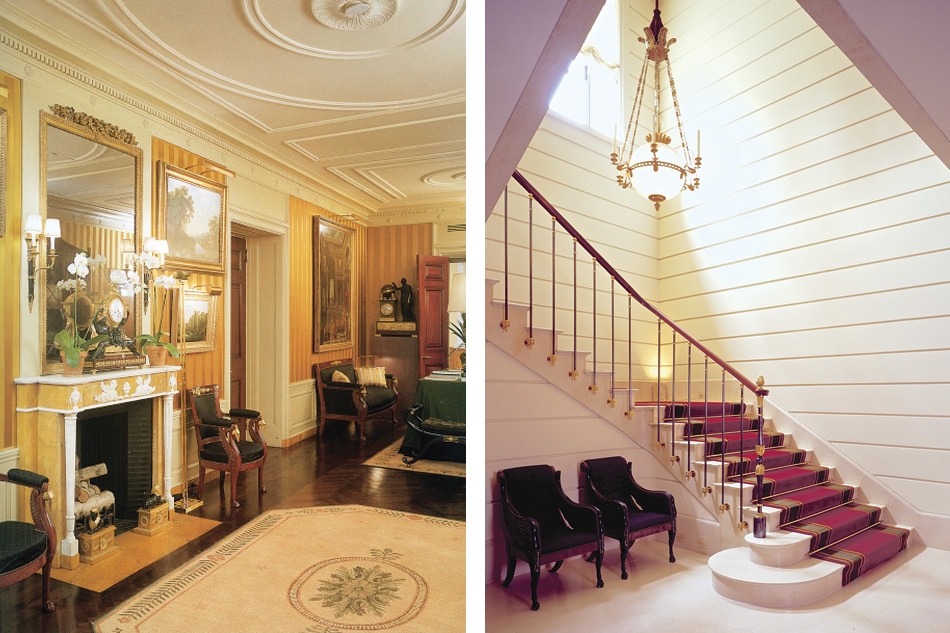 Left: Samuel was inspired by the severe elegance of the Empire style when devising entrance halls, as illustrated by the Fifth Avenue home of clients Nancy and Frank Richardson, which he designed in the mid-1980s (photo from a private collection). Right: In the Fifth Avenue home of Susan and John Gutfreund, the entrance hall walls were hand-grooved to resemble limestone (photo by Mick Hales). 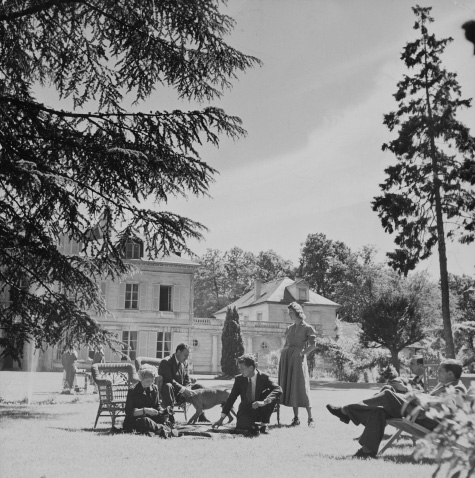 Samuel, seated left with his boxer, entertains guests in 1949 at his 17th-century country house in Viroflay, France. Photo courtesy of Eva Samuel

Henri received the ultimate education in his chosen field when he was hired in 1925 by Maison Jansen, where he assisted the legendary Stéphane Boudin. After World War II, Henri was hired to head the Paris office of the storied firm Alavoine, one of Jansen’s main competitors, over which he presided with tremendous success until he started his own firm, in 1970, at the age of 66. From dozens of interviews with other family members, clients, former employees, colleagues and friends, I was happy to discover that Samuel the man was generous and generally beloved. In fact, one of the main motivations for many of his commissions was to offer much-needed patronage to the artists he admired.

Although Samuel’s living room has become a design touchstone, most of his work has either never been published or, if it has, wasn’t ascribed to him as the creator until now. That’s because he operated in elite circles where privacy was paramount and where the designer’s hand should stay hidden. When asked in an interview if it bothered him that client Louise de Vilmorin often took full credit for the decoration of her salon bleu, named for the blue-and-white Georges Le Manach cotton print used almost exclusively throughout the room, Samuel demurred, saying he considered it the highest flattery. So discreet was Samuel, in fact, that he never discussed clients even with his intimates.

“If there’s one thing you should know about Henri,” revealed Arthur Aeschbacher, the Swiss artist and one of the decorator’s closest friends, “it is that he was a mélomane [lover of music].” Indeed music and dogs — dachshunds and boxers — seem to have been the decorator’s biggest personal passions. Many people told me that Samuel had a wonderful sense of humor, but an innate formality and propriety kept him from revealing private details. His employees, who worked out of his apartment from the mid-1970s until he died in 1996, considered him an enigma and had little idea of his personal life.

“I hate it when people say, ‘Do as you wish.’ I like to build on my clients’ taste and ideas.” 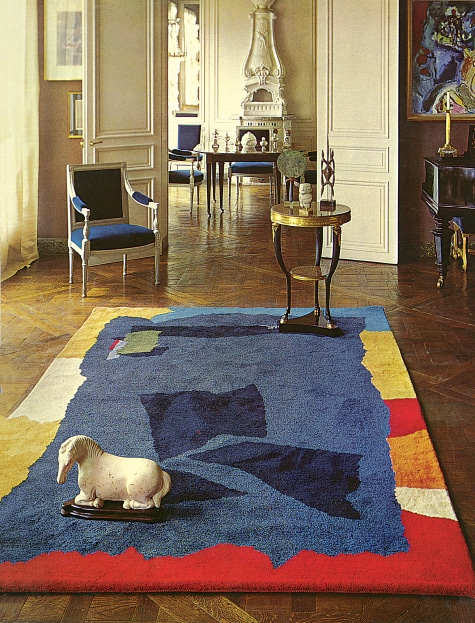 Samuel’s Paris living room was styled for a 1962 L’Oeil magazine article on contemporary rugs. This one was designed by the artist Arthur Aeschbacher, a close friend of the decorator. Photo courtesy of Aeschbacher

This contrasts starkly with today’s focus on personal branding and social media. I was also struck by how Samuel designed interiors to endure for the long term. Forget fast fashion — his clients maintained his decoration for decades, often until their death. He created a classic backdrop for them that became richer and more beautiful as they added their own personal layers to it. “I hate it when people say, ‘Do as you wish.’ I like to build on my clients’ taste and ideas,” the designer once said. “The fact is that however refined or inventive a project may be, it remains lifeless if its occupants don’t bring to it their own finds or quirks.”

Susan Gutfreund worked with Samuel in the mid-1980s on both her sumptuous Fifth Avenue duplex and her apartment in the Hôtel de Bauffremont, in Paris’s Seventh arrondissement, whose other wing was inhabited by the couturier Hubert de Givenchy until his death last month. (Of Samuel, the fashion designer said to me last fall, “He had perfect taste.”) “Henri would discuss with me doing the perfect base,” Gutfreund recalls, “like giving the woman a couture dress that was sheer perfection whether she added fantastic jewels or not.” In his own Paris apartment, the “fantastic jewels” were the commissioned design pieces, which, according to his nephew, the Brussels-based gallerist Fred Lanzenberg, Samuel cherished most among all his possessions.

A handful of clients admired these avant-garde tables, chairs and objets, but the majority did not, including one of Samuel’s last clients, entertainment mogul Jerry Perenchio, who told me he probably wouldn’t have hired Samuel if he had seen that apartment first. Nonetheless, when I visited Perenchio’s magnificent Bel Air house, which Samuel gutted to transform it into the perfect representation of an 18th-century French château, he described working with Samuel as one of the greatest experiences of his life.

Thumbing through the pages of my book, you will find the illustrated interiors united not by any so-called Samuel style but by their shared ambience of effortless and timeless elegance. Creating a life-enhancing environment for himself and his clients is what Samuel most valued and strove to achieve. Client and friend Princess Laure de Beauvau-Craon summed it up best: “Henri had an art de vivre like no one else.”