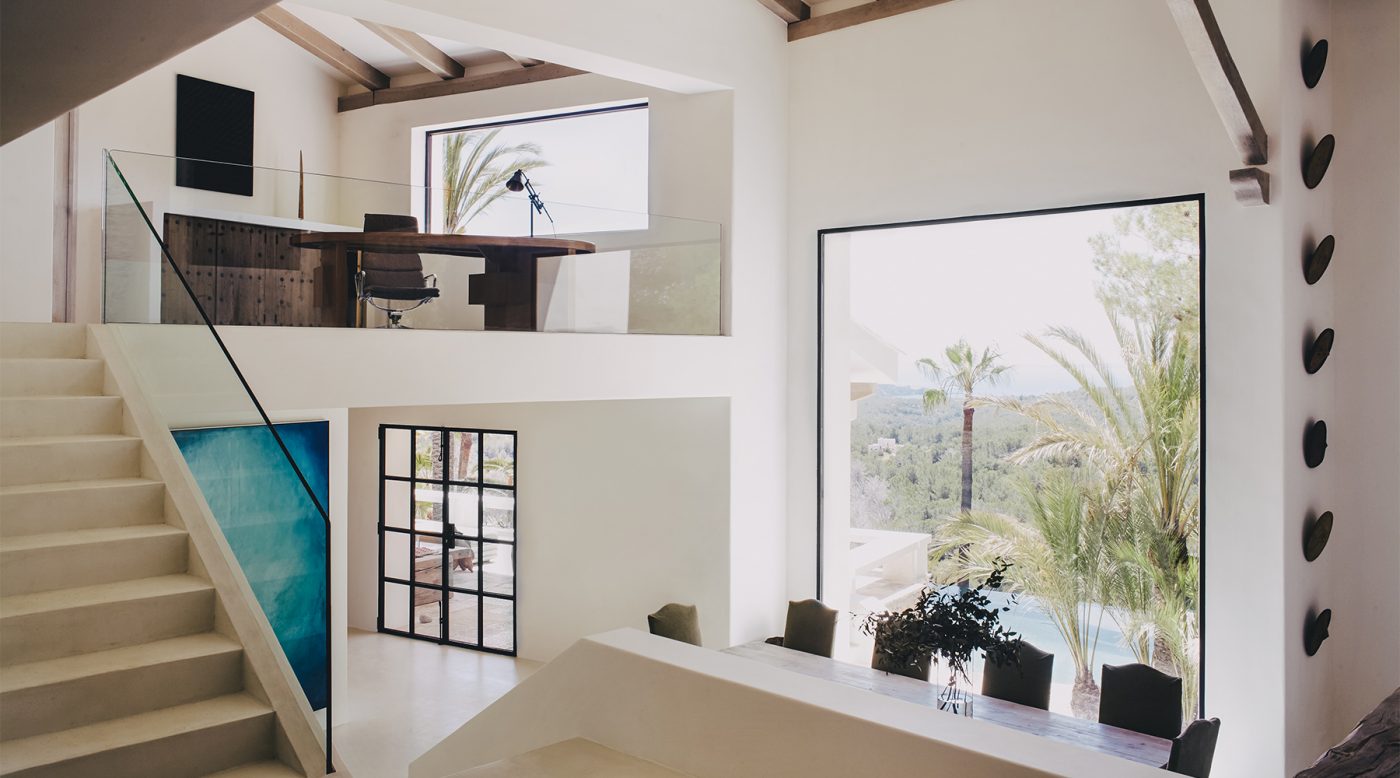 From Los Angeles to Ibiza, this London-based designer is creating singular interiors.

September 5, 2021When it comes to chromatic choices, London-based designer Hollie Bowden’s tastes are currently in flux. To date, the majority of her projects have been dominated by a subdued, rather earthy palette. “Primary colors make me feel uncomfortable,” she declares. However, she is currently decorating a new five-bedroom home for herself in Finsbury Park and has surprised herself. “It’s weird,” she says. “I’ve never been a huge fan of blue, but all of a sudden, I’m thinking of having a blue bedroom. The house is definitely going to be colorful.”

Given the quality of her work, it is surprising that Bowden is not better known or more widely published. Still, that has not prevented her from attracting a celebrity clientele. She has worked on a house in Los Angeles for actor Robert Pattinson and decorated the London home of singer and songwriter FKA Twigs. Other commissions have included a farmhouse conversion on the Scottish Isle of Bute and the London showroom of the luxury leather goods brand Tanner Krolle.

It is, however, with a series of villas on the Spanish island of Ibiza that Bowden has really made her mark. Her first solo project was an eight-bedroom villa there, belonging to a Greek client whom she met through friends. He ended up giving her complete creative freedom. “He was like, ‘I love your style, I love everything you wear and your general vision,’ ” she recalls. That quickly led to another commission: a 1980s modernist villa belonging to an art collector in Es Cubells, on the island’s southwest coast.

According to Bowden, the rooms there were “a bit gloomy and oppressive,” with lots of heavy dark wood. She completely gutted the interior, introducing much larger windows and creating a triple-height ceiling in the dining area. The scheme is typical of her aesthetic, with a soothing off-white palette, a host of textural natural materials and a cleverly curated selection of furnishings. These include a 16th-century limestone fireplace in the living room; an extraordinary mid-20th-century “throne” sourced in London, which looks as if totems are sprouting from its arms; and an old wooden washboard uncovered at the Paris flea market and hung as a piece of wall sculpture.

Another Ibizan project, which she calls “Forest Estate,” is similar in style. For that, she made a table out of a 300-year-old slab of walnut and mixed in a few modernist design pieces, such as a vintage Joe Colombo Elda armchair and a circa 1920 Bauhaus lamp in the living room, to act as a counterpoint to the exquisitely organic feel of the rest of the furnishings. “I quite like to plonk in slightly unpredictable pieces so things don’t look too boring or too natural,” she explains.

Bowden describes her style as “minimal-maximalist.” By that, she means she is generally drawn to pared-down interiors but at the same time has an overriding passion for objects. “I love a really bare space with one object and a plinth, but it’s got to be a really extraordinary object,” she says. “But then, I also like shelving that is full of weird and wonderful pieces all mixed together.” She cites among her design heroes the Belgian decorator Axel Vervoordt, and like him, she is drawn to the Japanese aesthetic concept wabi-sabi, which holds that beauty lies in imperfection. What particularly sets her apart are all the quirky, unique objects she weaves into her projects.

Ellie Pithers, a contributing editor to British Vogue, praises Bowden’s use of “extremely unusual antiques and well-traveled items in schemes that feel clean and unfussy without tipping over into the cold, inhuman, puritanical side of minimalism.” Twigs recalls many morning drivings to out-of-the-way markets at the crack of dawn. “Hollie is a genius at repurposing objects,” she enthuses, “whether it’s turning birdbaths into sinks, Victorian cages into light fixtures or beautiful robes into wall hangings.”

Bowden traces her love of interiors to her childhood in rural Gloucestershire. Her early years largely revolved around horseback riding, but her parents spent their time dabbling in property development. Her father was constantly going to salvage yards and collecting antiques; her mother would regularly redecorate their homes. “I remember her going through a whole mix of styles and eras,” recounts Bowden. “At one point, she was into that Laura Ashley look — pattern on pattern — and that was just everywhere.” One of Bowden’s most lasting memories is of waking up one morning to discover her mother had revamped her bedroom around her overnight.

Yet, it was only when she fled the nest (by that stage, a 16th-century cottage with horse manure walls) and did up her first home for herself — a three-bedroom apartment in Hertfordshire, to the north of London — that Bowden thought of interiors as a potential career. She enrolled at the KLC School of Design, in Chelsea, graduating in 2005, and trained for a short time with the property development firm Candy & Candy before working for three years for the Oxfordshire-based decorator Harriet Holgate. At the same time, she was dabbling in set design, fashion styling and floristry.

In 2013, she set up her studio in Shoreditch, where she now oversees a team of seven. Bowden’s commissions in the British capital have been refreshingly varied. For the German real-estate firm Schönhaus, she decorated offices that stretch over two floors of a graceful Georgian mansion in the heart of Marylebone. Inspired by the subdued atmosphere of traditional gentlemen’s clubs, her scheme is a testament to her love of fine materials. She used gray marble for the lobby’s flooring and reception counter, installed fluted walls of dark-stained oak, created custom green-leather desks with brass inlay and equipped cupboard doors with horsehair panels. She also mixed in a smattering of 20th-century design pieces acquired via 1stDibs: a Jacques Adnet coatrack from Le Grenier, in Roubaix, France; a Gino Sarfatti 1082 N floor lamp from Zigzag Modern, in Berkshire, England; and an Aldo Tura cocktail table clad in goatskin from Emma, in Opa-locka, Florida.

At the other end of the spectrum is a rather bohemian apartment in Ladbroke Gardens belonging to one of her cousins. It features green floors and pale pink walls, tapestries and Japanese prints and yet more intriguing objects: a stone garden sculpture in the center of the living room, a Garouste & Bonetti table lamp in the form of a mask and a set of wicker dining chairs created by Russell Woodard in the 1970s. The Lady Finger bed in the principal bedroom is of Bowden’s own design. “I love the fact that the headboard is rounded,” she says. “When you’re sleeping, it feels incredibly cozy.”

Bowden has been talking about launching her own in-house furniture collection for some time but has been so flat to the boards with interior commissions that the project has been postponed to 2022. She did, however, design a limited-edition bench with a stainless-steel base and horsehair cushion called Space Cowboy, which was exhibited by MASA gallery, in Mexico City, early last year as part of an exhibition titled “Recover/Uncover.” Later this year she is planning to open a shop within her Shoreditch studio to sell lots of curious items and remarkable antiques she sources from around the world, along with 20th-century pieces from Jorge Zalszupin, Ron Arad, de Sede and Vittorio Introini for Saporiti.

Bowden is a consummate shopper. “She can spot the perfect piece from millions of objects,” says MASA cofounder Age Salajõe. Often, she doesn’t know where her acquisitions are going to end up. She recently came across some floor lamps in Montreal that sound particularly intriguing. “They’re like these fluted columns and have little cupboards inside and these kind of shells on top,” Bowden says. Initially, she had them earmarked for a residential project in north London but has changed her mind. “Now, I’m like, ‘I can’t let go of them.’ There’s only one thing for it: They’ve got to go in my new house!” 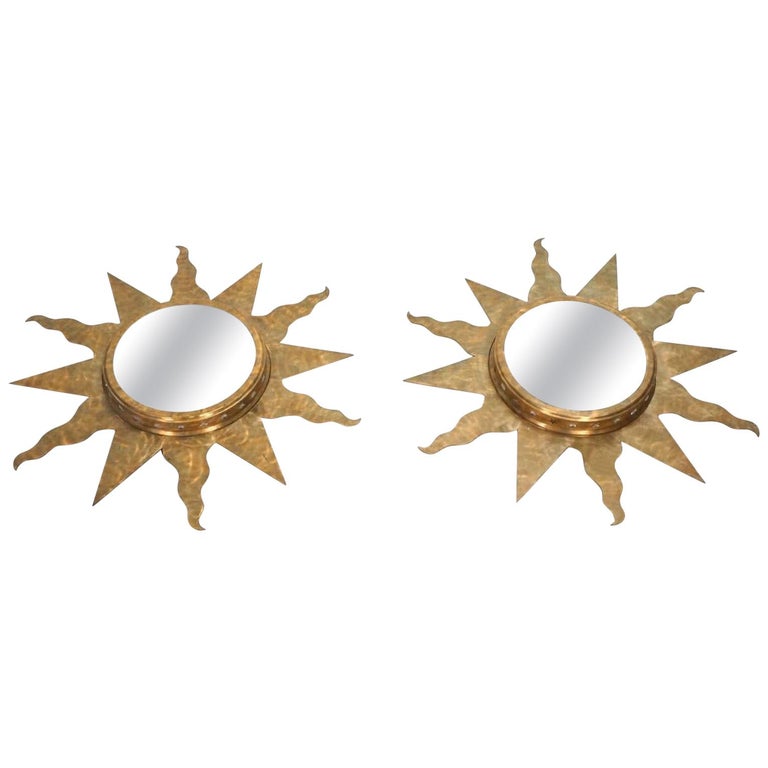 “I love anything astrological and am always drawn to stars and sunbursts. I’m drawn to the graphic fabrication of this pair of mirrors, which are simple but romantic.” 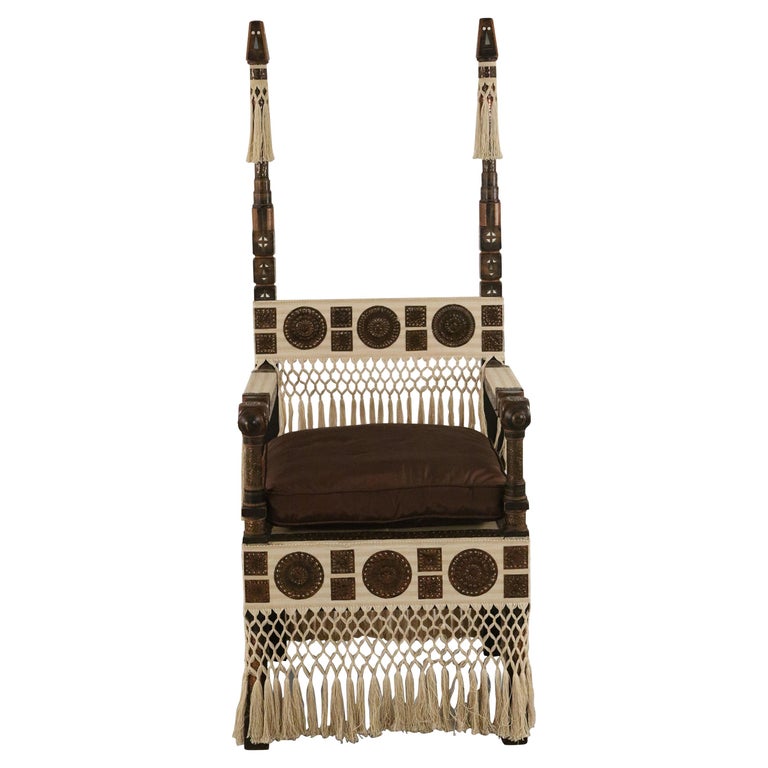 “It’s hard not to be totally floored by the theatricality and sheer imaginative force of Bugatti’s pieces. The mix of intarsia, geometric shapes and passementerie is so amazing.” 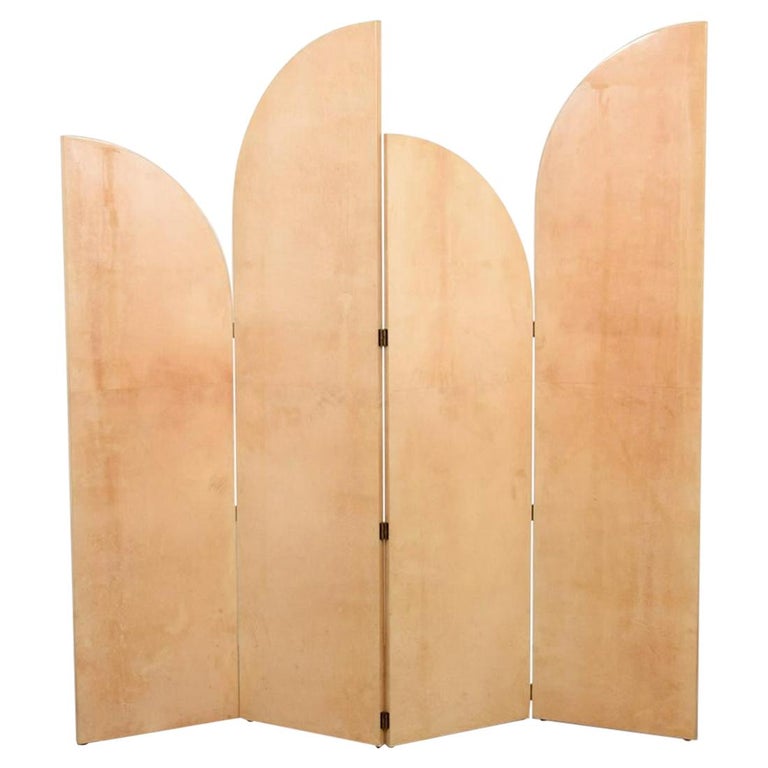 “The form of this Aldo Tura screen is so bold, and I love how it is tempered by the luminous softness of parchment.” 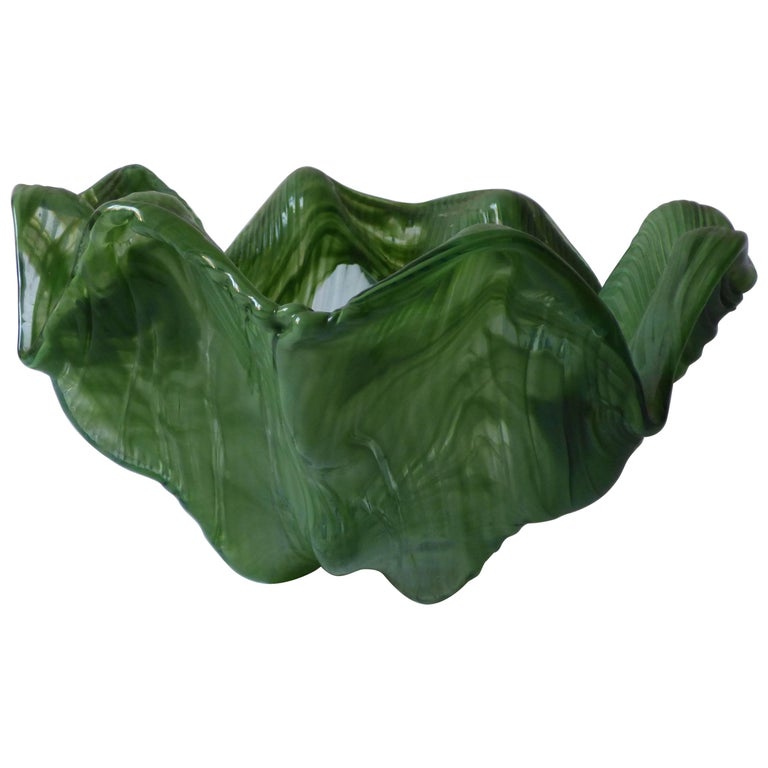 “Since I grew up in the country, I always refer back to nature. I love how this resembles a crumpled leaf or a shell, rendered in Venini’s inimitable high-key colored glass.” 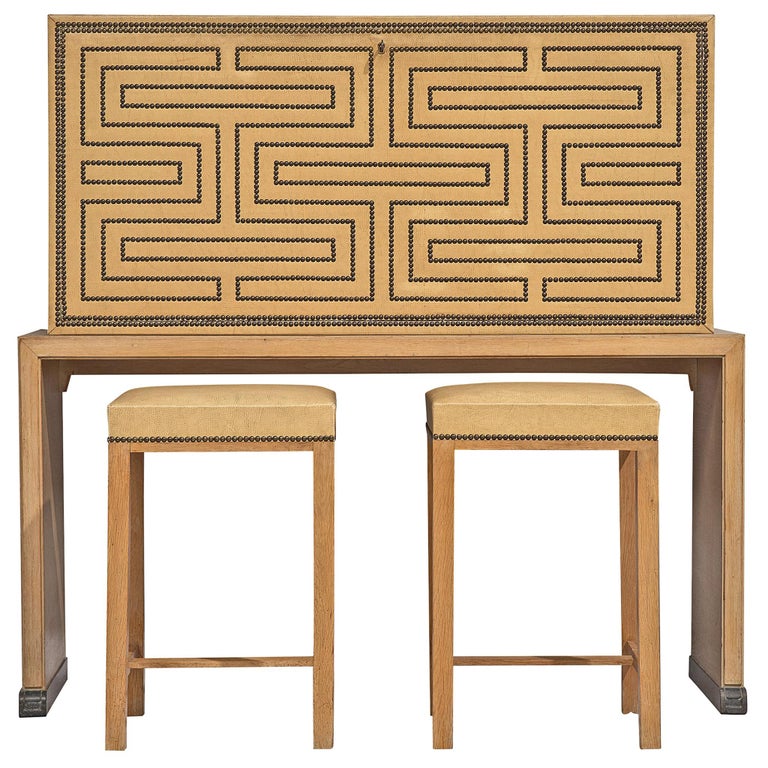 “Biedermeier is stripped down to its most elemental characteristics by Otto Schultz in this cabinet, but I love how he still plays around with the idea of ornament, using upholstery studs to create a beautiful motif.” 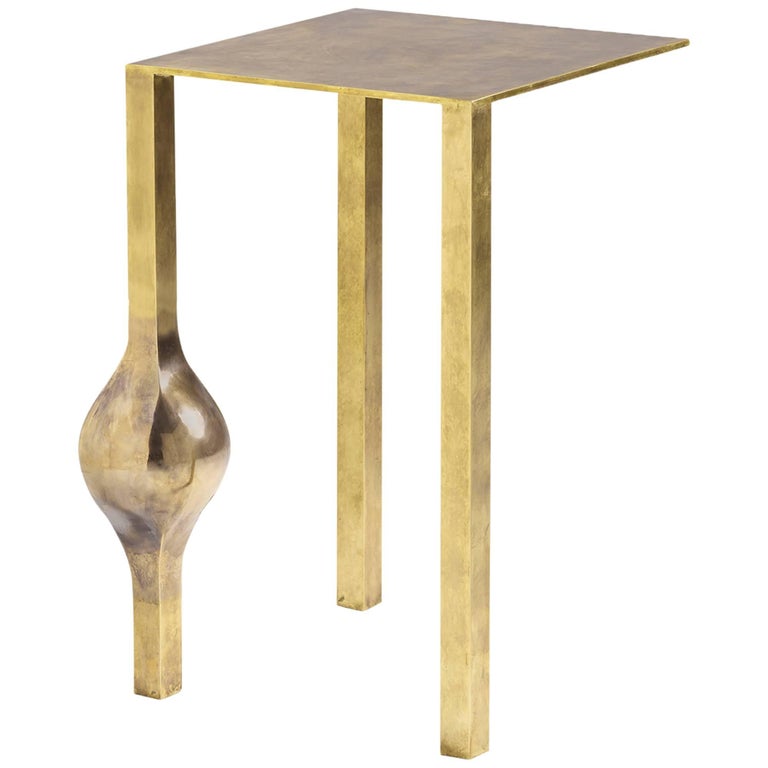 “Brian Thoreen’s work is a big influence for me, and he’s also such a lovely man. I love the incredible visual weight of this solid-brass table, paired with its teetering, surrealist asymmetry.” 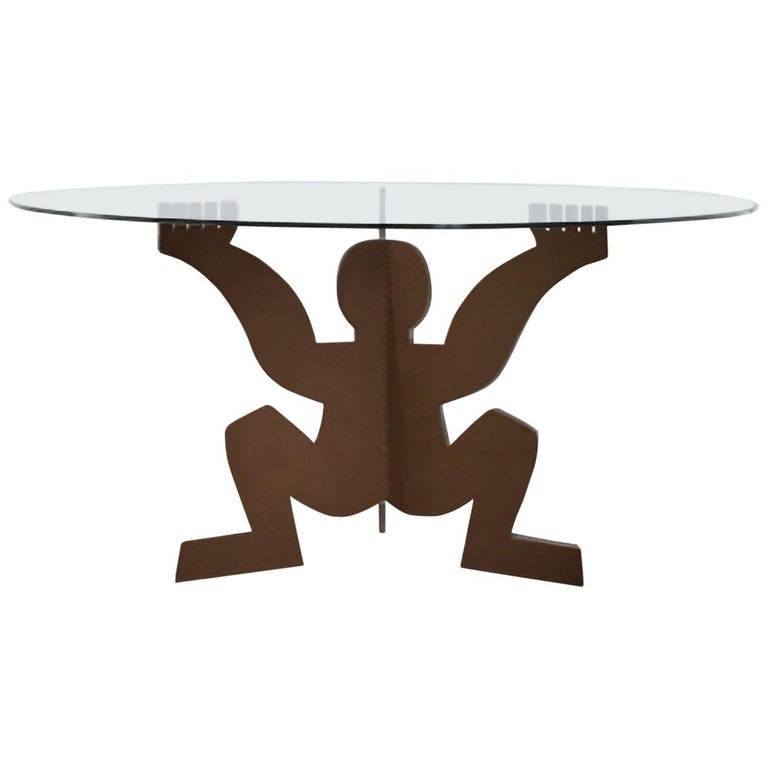 “Maurizio Cattelan’s work always makes me smile. I love how this table is slightly totemic and as full of life as one of Keith Haring’s blocky gyrating dancers.” 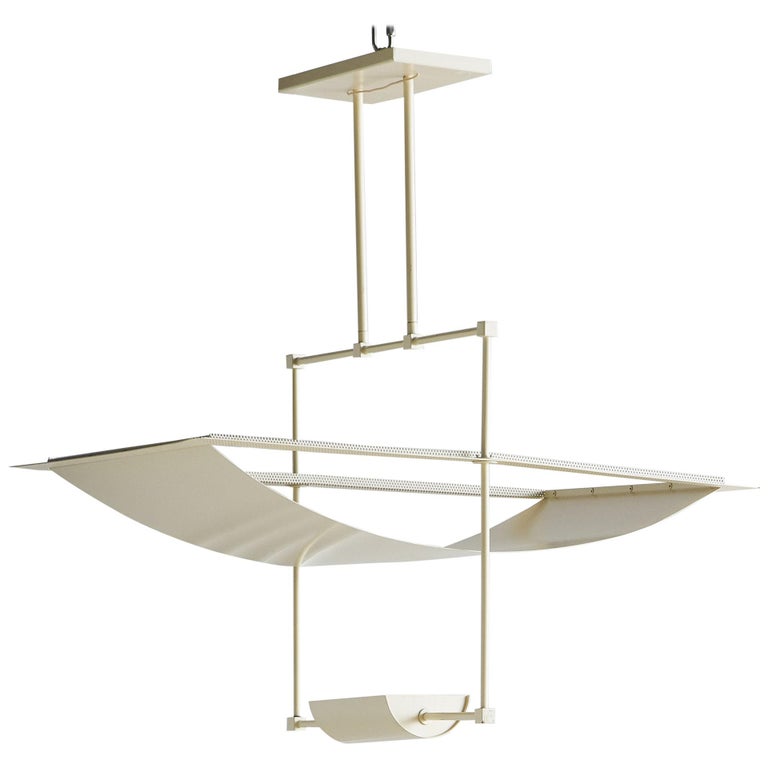 “This pendant is as graceful and full of movement as a crane in flight. The mix of a perforated metal frame with a hanging fabric cowl is typical of Botta’s extraordinary touch.” 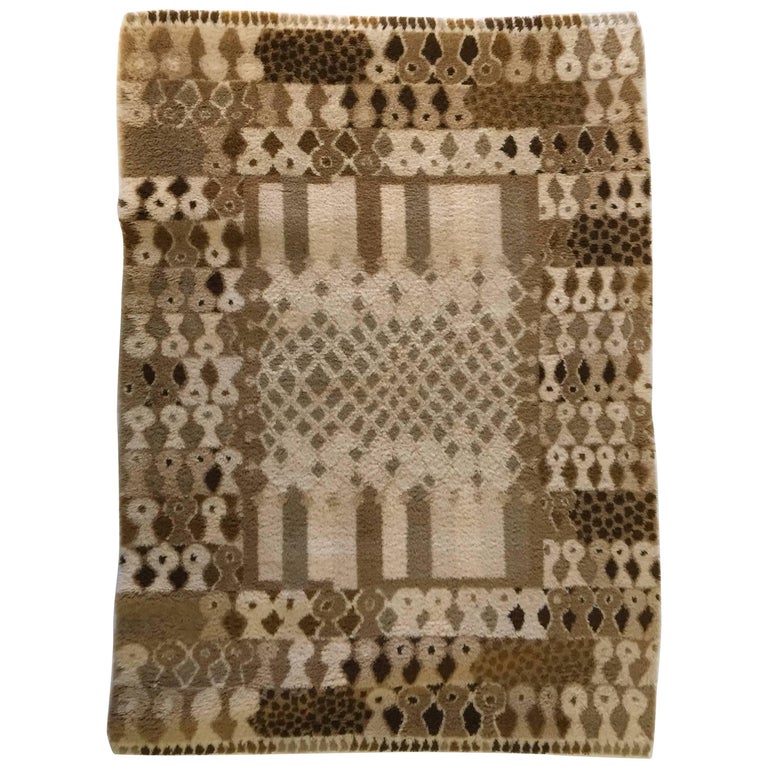 “Borker’s modern takes on the codes of French weaving and Aubusson tapestry are always beautiful. I love how this piece seems to draw simultaneously on references from Moroccan and European Art Deco rugs.” 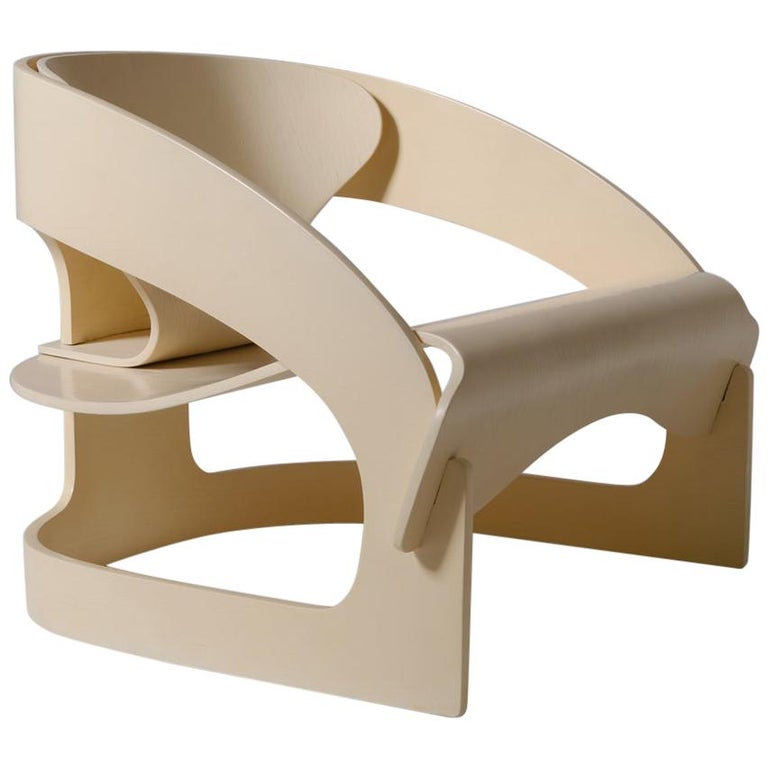 “I’m always drawn to Colombo’s cool, space-like sensibility. This armchair is so elegant, and almost a bit improbable given the material.”