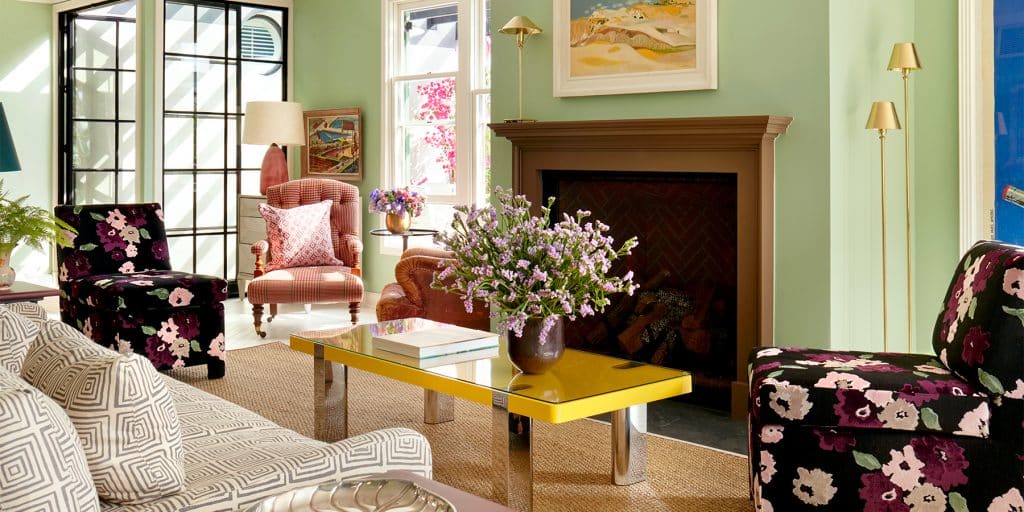 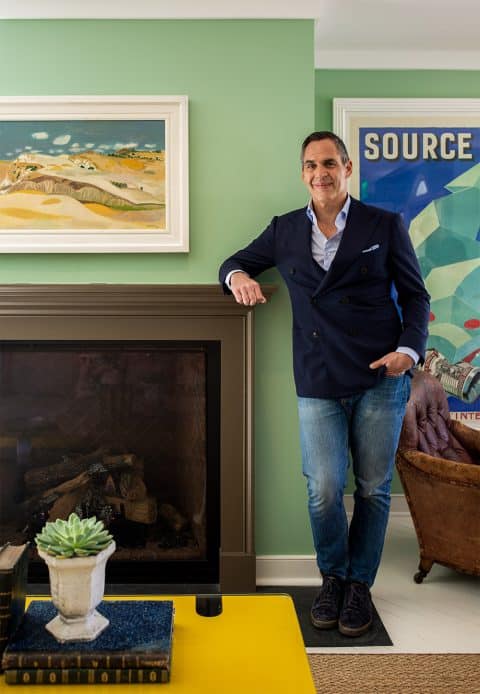 Exceptional service is a reminder that true luxury is more than expensive objects. Jeffrey Klein gets that. The visionary behind JK Hotels, which owns the celebrated Sunset Tower Hotel and San Vicente Bungalows, both in Los Angeles, and the Monkey Bar, in New York, Klein is dedicated to a singular pursuit: “I love to craft an experience for people, to really curate that.”

Experiences have become an irresistible frontier for influencers and marketers in recent years, but Klein was one of the first to understand how to merge the concrete with the sumptuously intangible. “It’s not just the decor or the design,” he says. “It’s so much: It’s the menu. It’s the way the servers talk to the customers. It’s the way the doorman speaks to them. It’s the entire soul of the place. This is all extremely exciting to me, and there’s no other job like it.”

Klein grew up in New York with parents who cared about culture and travel. His mother, who wrote books about antiques and folk art, has wonderful taste, and his father has a gregarious disposition, he says, noting, “Those two things are what define my career.” 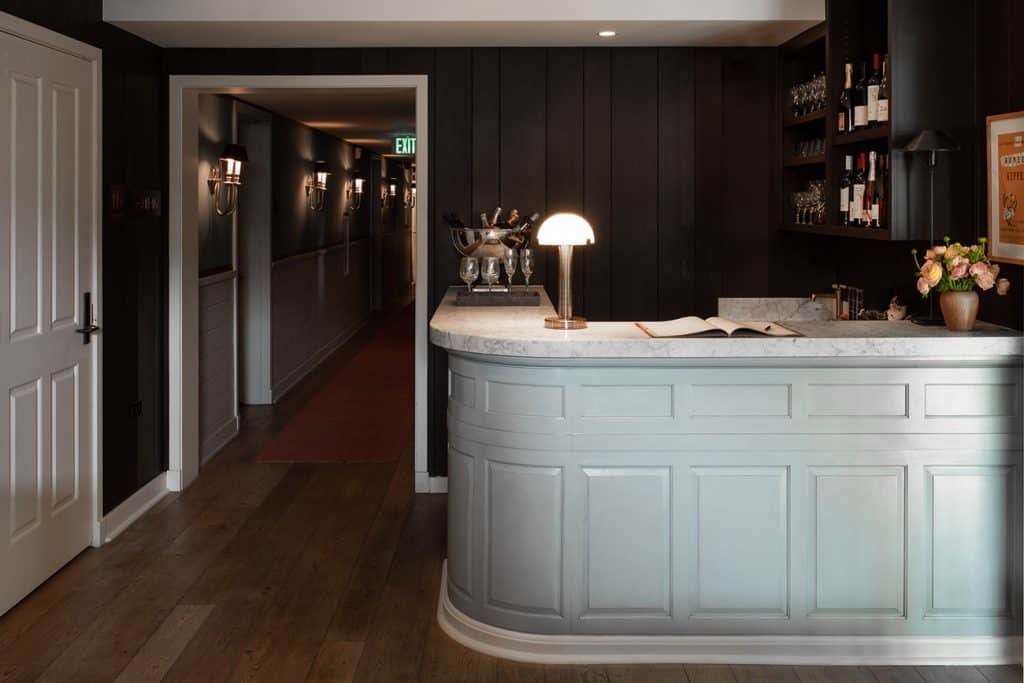 The walls of the reception and bar area are painted a deep Coca Cola brown, while the bar is a gray blue. “We wanted to make this a social space as well as the check in/check out,” Konig says. “I love dark rooms. I think they are always interesting and work well in the daytime as well as at night, contrary to what one might think.”

Klein creates places people want to be in. Enveloping, sophisticated and slightly nostalgic, his environments are like fragrances; with the right chemistry and attitude, they just work. Through his personal, noncommercial approach to hospitality, the tastemaker, whose career spans 25 years, offers patrons the opportunity to be transported and tended to on their own terms. 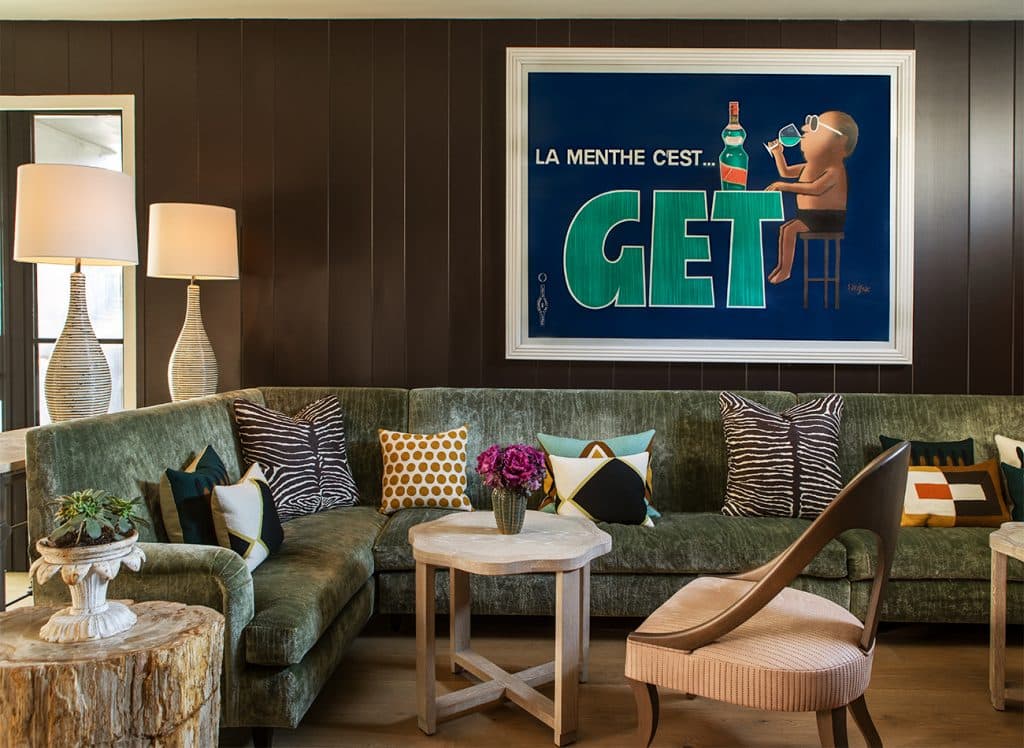 A vintage Get poster by Raymond Savignac hangs over a custom sofa. The cocktail tables are also bespoke, based on an antique original. Photo by Laure Joliet

His latest project, Hotel 850, in West Hollywood, is a collaboration with interior designer Rita Konig and architect Marc Appleton. With just 23 rooms, the property is a quietly cool addition to L.A.’s buzzy hospitality scene. It’s also unlike his previous endeavors: Created to feel like a private residence, the hotel is intimately scaled, with an unpretentious, cozy vibe — “like staying at an aunt’s chic house,” as Klein puts it. And it represents a different concept of what accommodation and service can be. 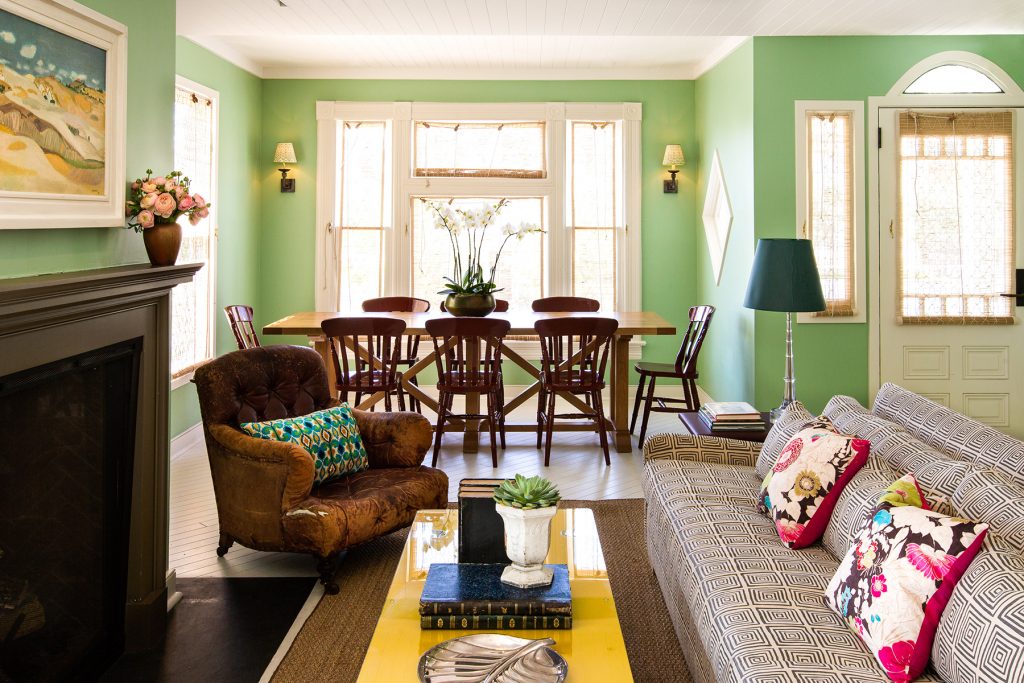 A vintage leather club chair sits in front of a table surrounded by antique Windsor chairs painted in a high-gloss oxblood red. Marianna Kennedy’s Trumpet lamp stands on the table at the far end of the sofa, which is upholstered in Ziggurat fabric from China Seas.

Arriving guests enter a sunny space where they are greeted by a desk agent, who stands next to a selection of wines arranged in an open wooden cabinet, suggesting that his or her role extends beyond check-in service. Instead of a scatter of lobby chairs, a plush, three-piece sectional hugs the paneled walls. People sit, hang out and talk, rather than fidget with their phones until their Uber arrives. 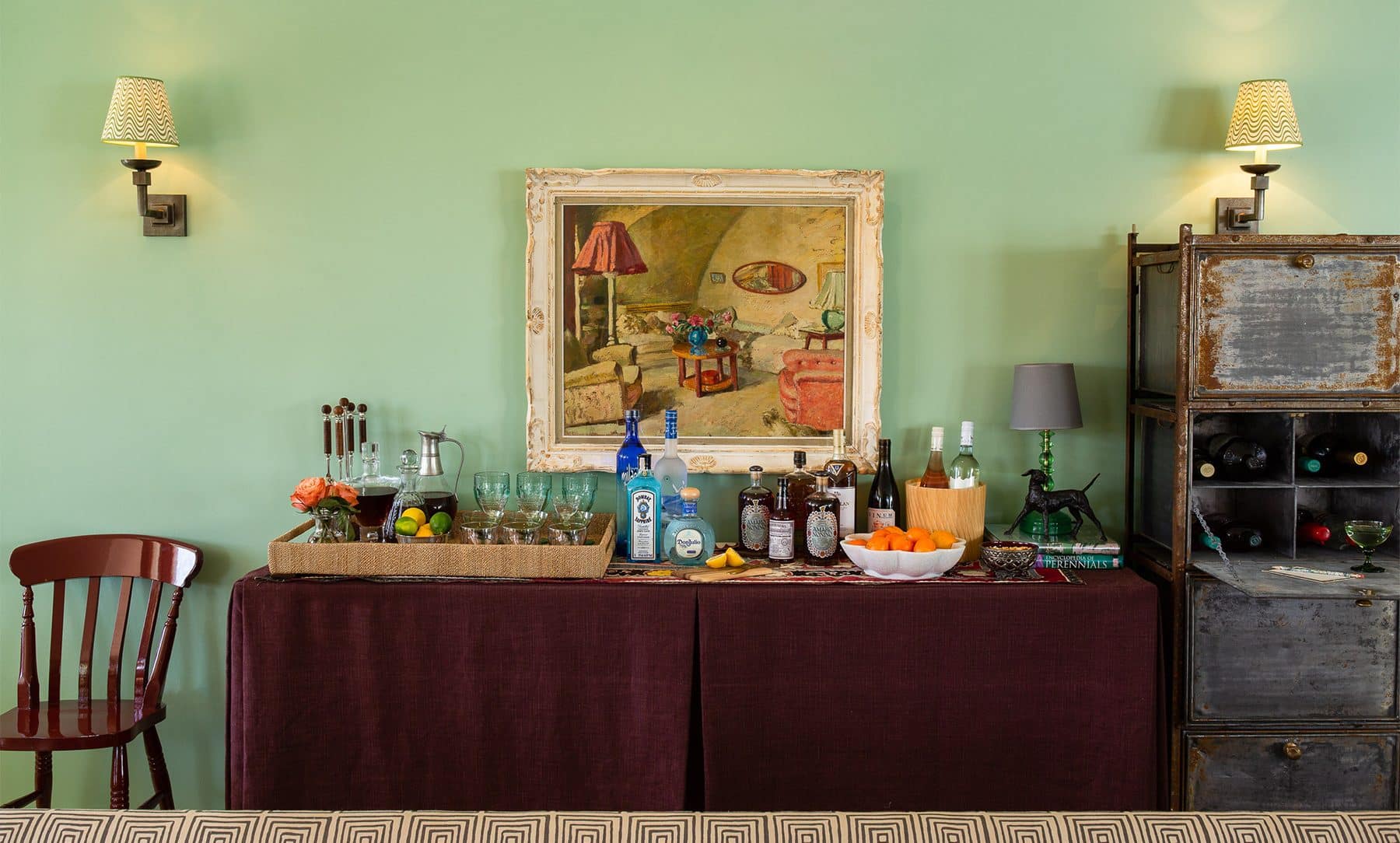 Another oxblood-painted Windsor chair stands beside the honor bar, which is set up on a custom table covered with an antique textile. The vintage painting above, by an unknown artist, was purchased from a London dealer.

There is a breakfast room, as well as a kitchen where a few guests have even cooked meals. The living area, terrace and roof deck are also shared, and the hotel recently debuted an honor bar that allows people to mix their own drinks, as they do at home. They can then either linger there over their libations or bring them back to their rooms, a choice that typifies the fluid movement between privacy and interaction at 850. 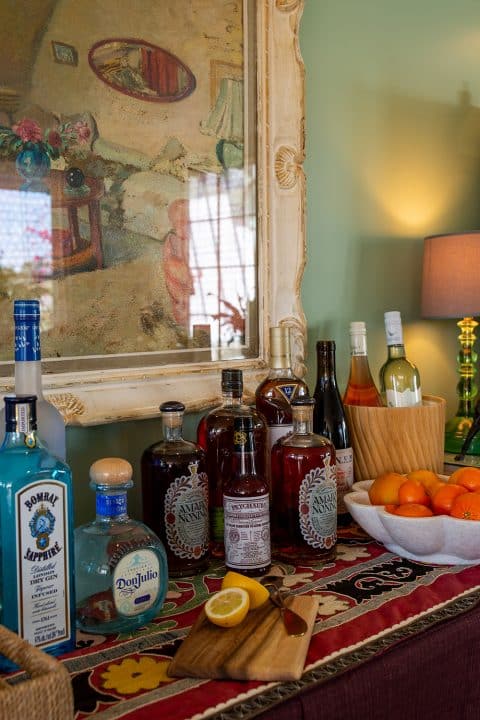 After mixing themselves a drink, guests can either linger at the bar over their libations or bring them back to their rooms, a choice that typifies the fluid movement between privacy and interaction at 850.

Klein was inspired to launch this venture after a trip to Sicily with his husband, producer John Goldwyn. The couple stayed at the Seven Rooms Villadorata, in the baroque city of Noto, in the island’s southeast corner. The hotel left an indelible imprint on Klein.

He envisioned Hotel 850 as part of the same breed, offering the independence that Airbnbs promise but including amenities and service they often lack. “I feel like these smaller hotels hit this special nerve, allowing people to be immersed in the culture that they’re visiting, to have a unique, personal experience and stay in a hotel with a soul, like a beautiful home,” says Klein.

The property occupies an 1800s bungalow built to house railroad workers; its conversion required the expertise of Appleton, whose firm had performed a stunning restoration, much admired by Klein, of San Ysidro Ranch, in the Santa Barbara County, California, town of Montecito. The architect worked carefully to preserve and repurpose the historic interior. He also added a separate contemporary four-story structure behind the original bungalow, to complement it and to provide space for more rooms. “To have the extra layer of history just makes it more interesting,” Appleton says. “There are plenty of new hotels out there and plenty of contemporary architecture. It’s very seldom you get this combination of historic and new.” 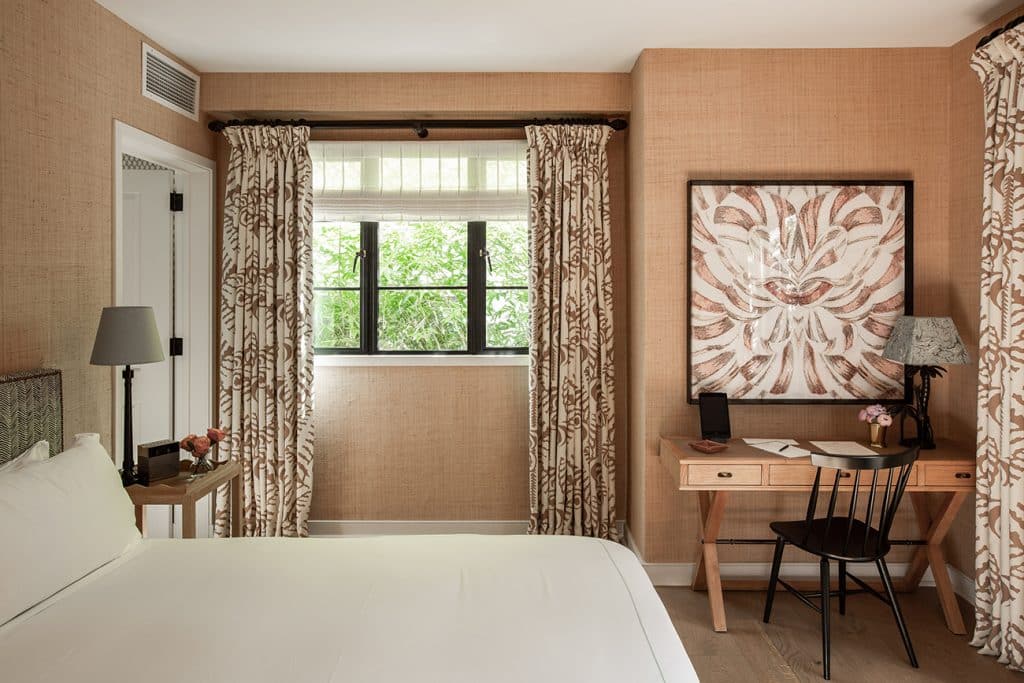 Konig explains that she put grasscloth on the walls in this bedroom “for the warm texture that it brings.” The overall pale, neutral, beachy tones are accented with navy blue and other darker and black elements. The curtains are from Quadrille.

Klein contacted British-born Konig to do the interiors at the suggestion of Graydon Carter, the former editor in chief of Vanity Fair and a partner in the Monkey Bar. “I knew I wanted warm and residential, but Rita really is the one who got us there,” Klein says. 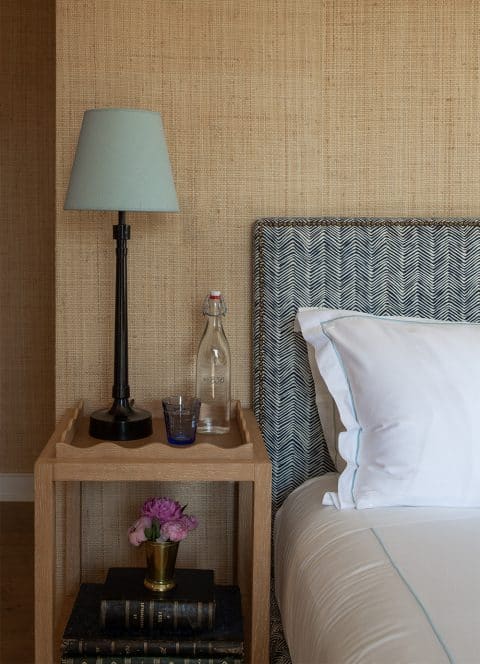 Atop the nightstand is a Jackson lamp from the English company Pooky. The lampshade was hand-painted in the U.K.

Konig created a colorful, eclectic design — an assemblage of furnishings and accessories that looks collected and effortless, not neutral and forgettable. She had one of her own vintage giraffe lamps reproduced for the rooms and commissioned marbleized paper lampshades. “I suppose I was aiming to do something that was sunny and, in my view, Californian,” Konig explains. “I love navy and khaki in the heat, and I also love that seagrass wallcovering we used, which immediately gives such warmth to a room. I was looking to create the sort of hotel room I would really like to stay in.”

While Konig’s palette was guided by her own sensibilities, her mélange of patterns was inspired in part by the fearless designs of Kit Kemp, the co-owner of and creative force behind the Firmdale Hotels in London and New York. “So many hotels are so beige and boring, and a lot of places in L.A. seem to be dark. I wanted this to feel fresh and crisp,” she says. She dressed each floor in a different color, in protest against that blandness and to avoid the confusion that occurs when stepping off the elevator in a hotel in which all the floors have the same decor. 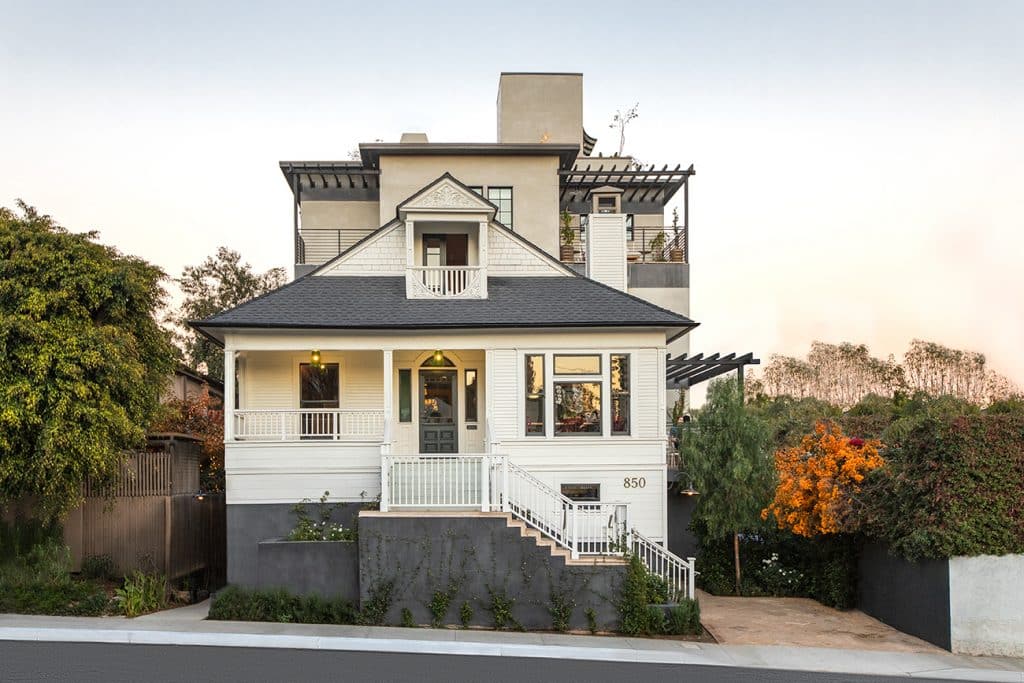 Architect Marc Appleton added a separate contemporary four-story structure behind the original bungalow, to complement it and to provide space for more rooms. Photo by Laure Joliet

The Carriage Room, despite being only 200 square feet, is the property’s most popular accommodation, featuring a built-in bed — Konig’s riff on a Steven Gambrel design — and light blue paneling. “It’s a jewel box,” says Appleton.

Throughout, Konig turned to trusted manufacturers like Quadrille, for the nylon curtains and headboards, and Raoul Textiles, for fabrics. Collaborating with Klein was “wonderful,” she says, “because Jeff knows so much about how hotels work and what’s needed and what materials are best. But he was also very trusting of me as a designer” — as when she proposed using grasscloth instead of paint because it wouldn’t scuff as easily. 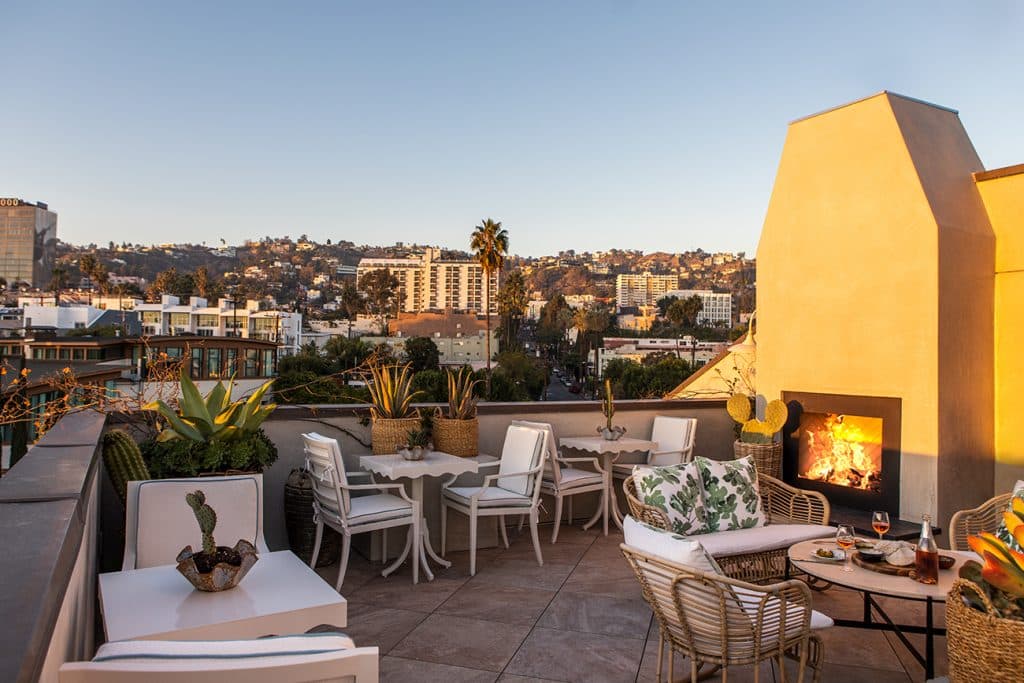 Konig designed the rooftop terrace’s chairs and tables specifically for the project, covering the seat and back cushions in a Pierre Frey textile finished with blue piping. A Peter Dunham fig-leaf fabric covers the pillows on the cane pieces, which are from Liggestolen, in Denmark. Photo by Laure Joliet

Hotel 850 reveals how supremely unjaded Klein is about his craft. Rather than a monolithic development or a slinky sure-thing hotspot, he has produced an intimate, personal version of a guesthouse — one that creates a gracious experience far removed from the purely transactional one of paying for shelter. As in all his projects, Klein is involved with the details. “I’m constantly tweaking,” he says. “If a room doesn’t look as warm as I want it to, maybe we paint it or add antiques. And service is a big part of it too, because it’s a constant living, breathing organism.”

“That’s something that’s amazing about Jeff,” says Konig. “He’s been in hospitality since he was a kid, and he just lives and breathes it. When he travels, he’s absorbing everything. It is a real passion for him, not only a business model.” 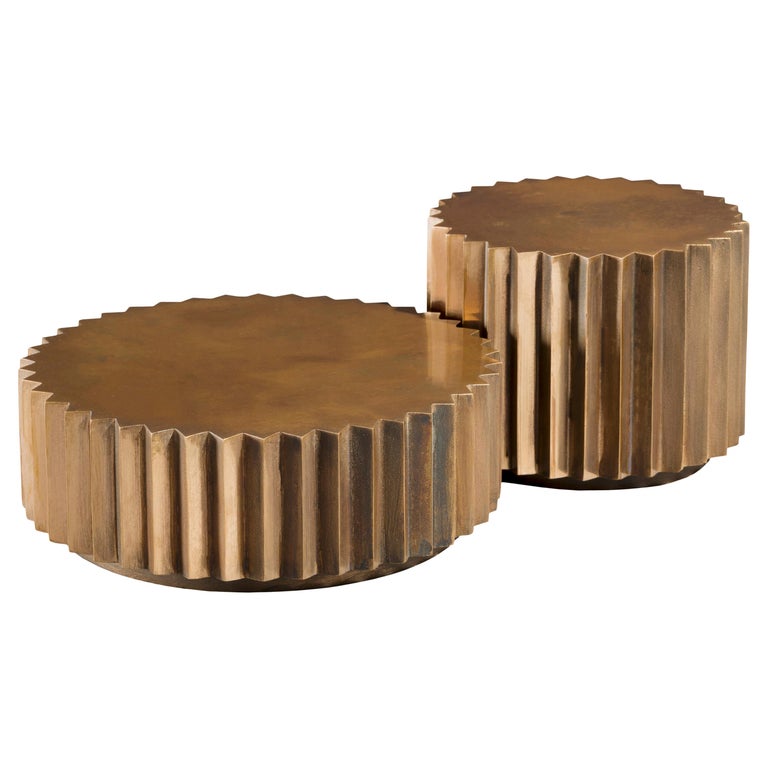 “Such interesting coffee tables — they make me feel sophisticated yet hip.” 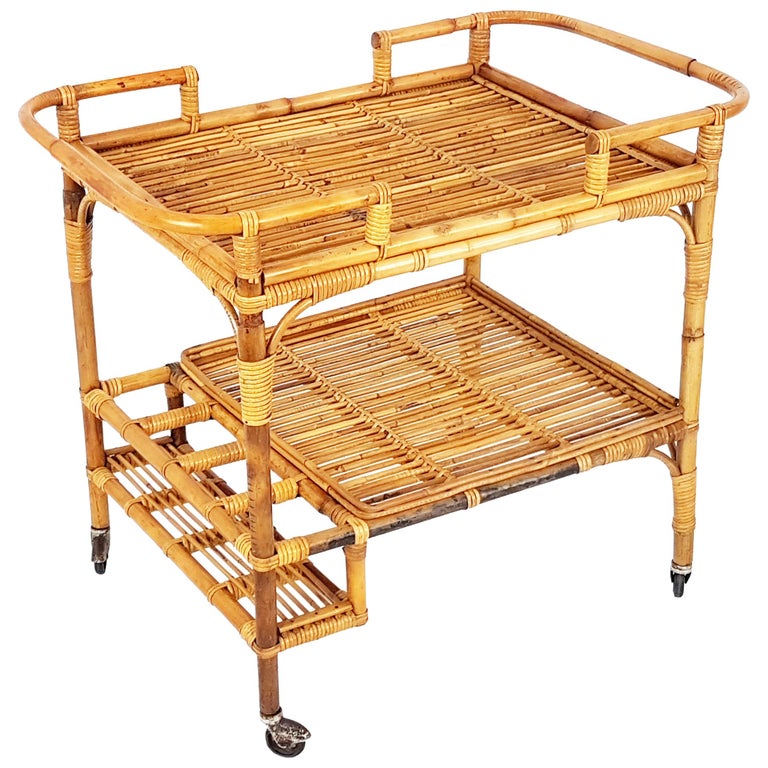 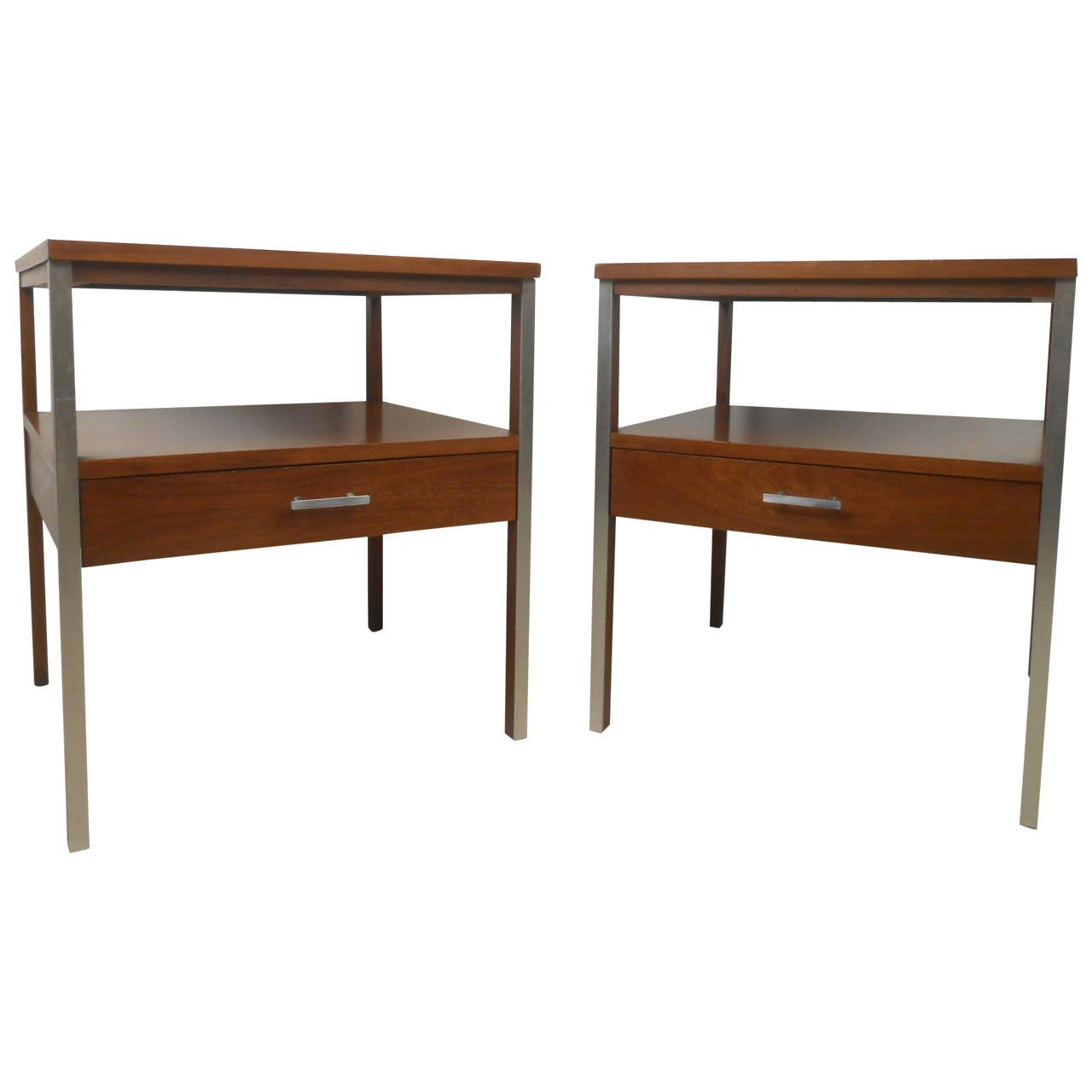 “All the furniture in my Sunset Tower hotel is wood and brass and inspired by Paul McCobb. I worship him.” 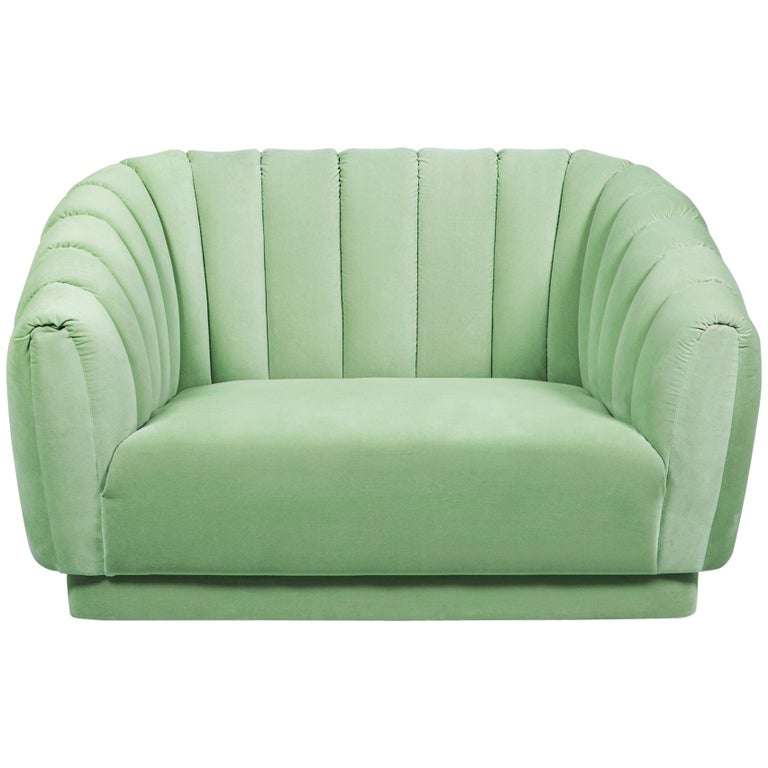 This reminds me of Hotel 850. Working with Rita Konig was an incredible experience — she taught me to always embrace color and never be afraid of it. 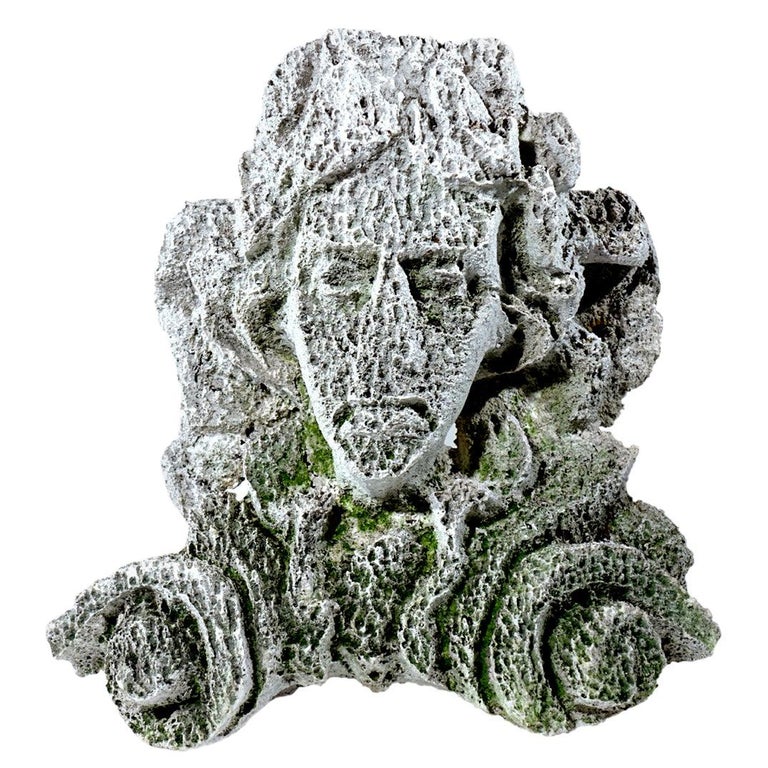 “I love inserting architectural finds into an exterior wall or pathway in an unexpected way. I find it very soothing.”