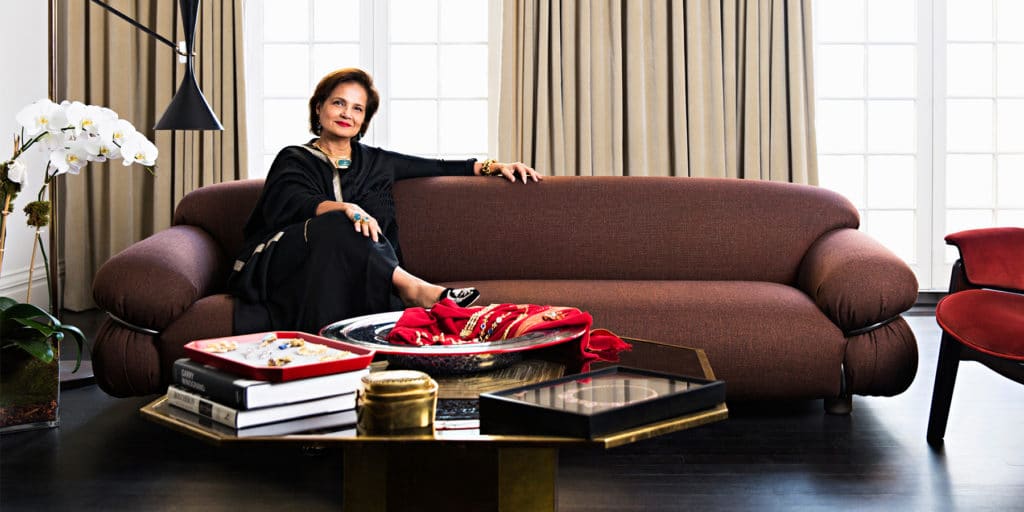 The Pakistani-born jewelry dealer, who spent most of her career as a foreign policy expert studying war, is focusing on the beauty in life.

Mahnaz Ispahani Bartos remembers her first piece of jewelry. She was a girl of 10 living in Dhaka in what was then East Pakistan, when her paternal grandmother gave her a pair of VICTORIAN style seed pearl and emerald drop earrings. Ispahani Bartos promptly pierced her doll’s ears and inserted the earrings.

“It’s a powerful memory for me because in the revolution of 1971 [the Bangladesh Liberation War], when Pakistan split up, my doll was lost at sea with my mother’s first-edition books,” she says in her office, located in the penthouse of an art gallery building on East 57th Street in Manhattan. “A lot of things were lost because we were evacuated. Those earrings were on my doll.”

While conflicts and war colored Ispahani Bartos’s early years, so did culture and a love of beauty. “I’m originally from Pakistan, and my father’s family is of Iranian origin. An appreciation of jewelry is very much part of everybody’s cultural life and everyday life there,” she says, her PAUL BINDER turquoise earrings swaying gently as she speaks. “The poorest woman in a field in India will be wearing some version of an anklet or a nose ring. Women in our cultures traditionally received all their worldly assets in the form of jewelry. If you have more wealth, possibly you have more elaborate jewels, but it’s a very basic part of your life.”

Yet a second war, the Iranian Revolution of 1979, disrupted Ispahani Bartos’s childhood. It was perhaps natural, then, that she was drawn to foreign policy as a career, spending the bulk of her professional life studying everything from nuclear deterrence to the rise of Islamic movements.

Now, however, she has set aside geopolitics for gems. The Mahnaz Collection has established Ispahani Bartos as a dealer of bold, colorful jewelry, made by an intriguing range of designers and artists and priced from about $2,000 to well into the six figures. Comprising such gems as the BURLE MARX brothers’ dramatic pieces composed of Brazilian stones and yellow gold, Hopi artist CHARLES LOLOMA’s modern mosaic work and irresistible examples from the haute jewelry houses, the collection offers a distinct point of view on the second half of the 20th century. 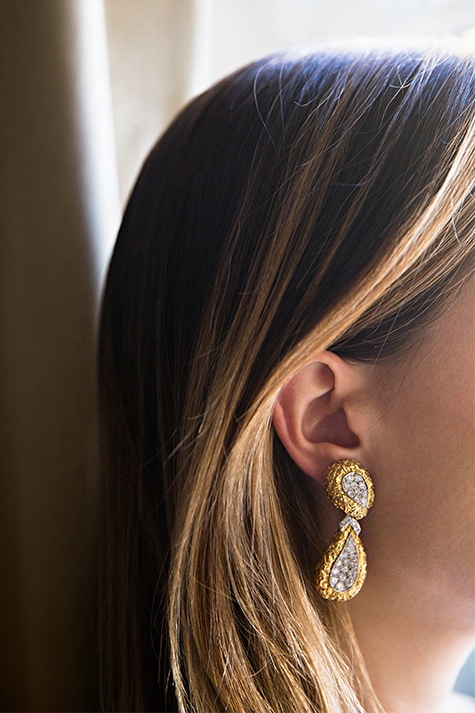 A model wears a pair of ca. 1970 textured gold earrings by Kutchinsky with four carats of pavé diamonds and a detachable teardrop.

The steepest learning curve, Ispahani Bartos admits, has been for the hardcore business side. “That’s the new piece for me in this work, but that is how I was raised. I come by this business late in life but quite honestly,” she says, with understatement. Her father’s family has been in trade and industry of one sort or another for about 250 years, dealing at various times in indigo, jute, rice, real estate, ships and tea. Ispahani is still the largest tea trading company in Bangladesh.

She describes her mother’s side as full of poets and influential civil servants, including the first mayor of Karachi after the Partition of 1947. Her paternal grandfather was Pakistan’s first ambassador to the United States. After the U.S., the ambassador was posted to the U.K. She recalls that he always kept in his dressing room a blue velvet chair with gold piping and the seal of the queen of England — every guest at QUEEN ELIZABETH’s coronation received one. “I met PRINCE CHARLES some years ago, and I said to him, ‘We’ve had this chair forever.’ And he said, ‘That was quite a good gift, wasn’t it?,’ ” she relates with a laugh.

Ispahani Bartos studied English literature and political science at WELLESLEY COLLEGE, in Massachusetts, graduating Phi Beta Kappa. From there, she went on to the Fletcher School, TUFTS UNIVERSITY’s graduate school of law and diplomacy. She then steadily built her CV, writing books, receiving a Harvard fellowship, working for former vice president Walter Mondale and the Democratic Party and spending a decade at the FORD FOUNDATION. For 15 or 20 years, she passed roughly four to five months a year on the road, clocking time in such countries as the former Soviet Union, the former Yugoslavia, Kenya, Mali, Brazil, Guatemala and Nigeria.

“Because my interests had always been cultural, my eye was responding all the time,” she says. “If you’re working in Russia, of course you’re in the HERMITAGE. You go and see the state treasures that are accessible in the Kremlin. If you’re in Senegal, you start looking at the carvings. In Mali, you’re looking at Dogon culture. It’s why I love jewelry with texture and richness of culture. It’s an experience of the world. It’s almost by osmosis that you absorb it.” 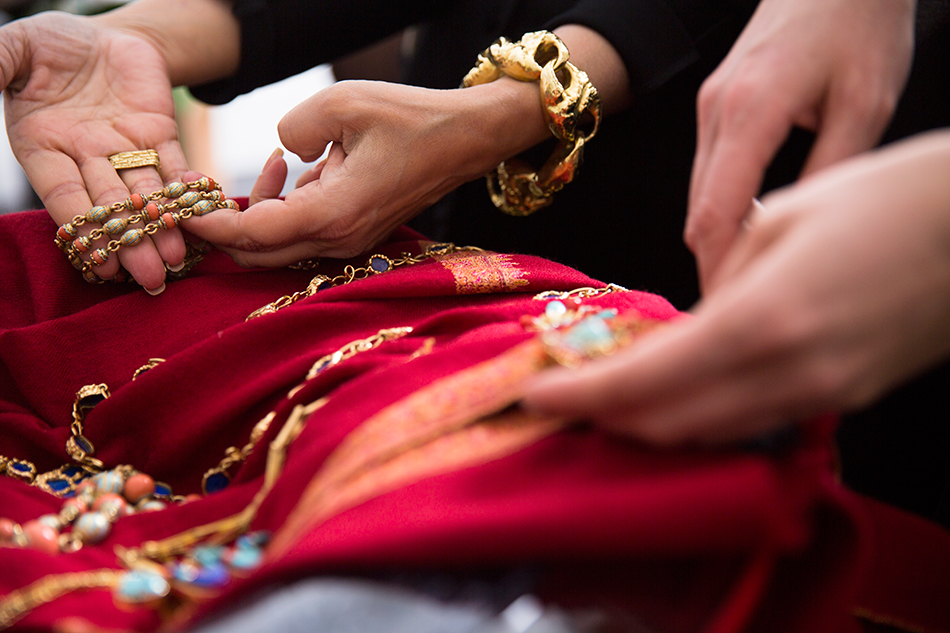 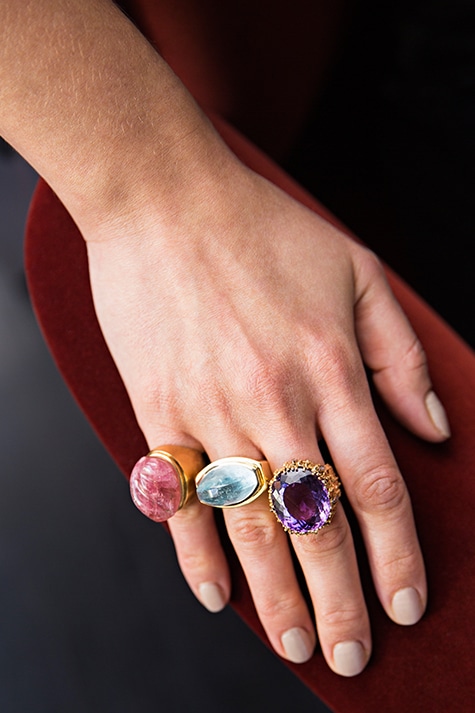 This array of rings comprises, from left, a forma livre-cut rhodochrosite and gold ring by Roberto Burle Marx, ca. 1960; a carved 45-carat aquamarine ring by Paloma Picasso for Tiffany and Co., ca. 1980; and an amethyst, diamond and gold ring by Andrew Grima, ca. 1970.

By the late 1980s, Ispahani Bartos was living in Washington, D.C., where she stood out from the typically dowdy Beltway crowd with her cutting-edge designer clothes; she put together a wardrobe by ALAÏA, GAULTIER, UNGARO, KENZO and MUGLER. “We were all wearing big shoulder pads. I had a neon yellow CLAUDE MONTANA coat, which I still own,” she says. “When I look at it, I think, How did I wear it? I must have looked like a bright yellow pinhead. It was fantastic. I look back and am admiring of that self. It was a certain kind of — I don’t know what it’s called — fashion courage.”

In 1992, Ispahani Bartos joined the Ford Foundation and moved to New York, where she met and married photographer ADAM BARTOS. The way Ispahani Bartos tells it, her decision to change fields emerged from a gradual reevaluation of her life.

“It was more personal and philosophical,” she says. “I’ve been a student of war and violence all my life, and I’ve wanted to try to make things better in the world with my foreign policy work. There was a moment I felt, How can you also have an experience of beauty? The human potential for beauty is also what keeps the world going. It has to. If we weren’t able to create, we wouldn’t have the strength to deal with the other things.”

Before formally launching her business, in 2013, Ispahani Bartos did her research. “I would just go to Forty-Seventh Street and walk around, ask stupid questions,” she says. “If you’re afraid to ask the stupid question, you probably end up getting in a lot of trouble. This is a business that’s pretty tough. There’s a glamorous side, but there’s also a back end to it.”

The first person she hired was a metalsmith. “I wanted someone working with me who could look at a piece with me and say, ‘This is not beautifully made’ or ‘It’s been repaired,’ ” says Ispahani Bartos, who describes herself as hands-on. “You learn by looking and touching.”

Her personal taste at the time tended toward 18th- and early 19th-century INDIAN JEWELRY and contemporary jewelers like SOLANGE AZAGURY PARTRIDGE and Dittlman & Jank. But she decided to focus her business on more modern eras: ITALIAN artist-designed pieces from the 1970s, early SCANDINAVIAN minimalism from the 1950s through the ’70s, independent BRITISH designers from about 1965 to 1980 and the NATIVE AMERICAN modernist masters from the 1960s onwards.

“If we weren’t able to create, we wouldn’t have the strength to deal with the other things.”

She also sells the classics, including BULGARI, BOUCHERON and famed TIFFANY designers DONALD CLAFLIN and JEAN SCHLUMBERGER. “CHAUMET is probably my favorite house from a particular period,” she says, flipping through her database of inventory to two striking Chaumet suites. One, from the ’60s, comprises a yellow-gold collar and earrings with a whimsical pineapple motif, accented with diamonds and turquoise. The other, dating from the following decade, is all jagged edges and drama. “For some people, this is BRUTALISM at its absolute height. But look at the majesty,” she says.

Some of Ispahani Bartos’s most unusual pieces are by Native American designers, such as Charles Loloma, who studied pottery before trying his hand at jewelry and whom she calls the “greatest Native American jeweler of all time.” She holds up a single earring, composed of two long strands of turquoise beads with silver shards dangling from the ends. Loloma, who traveled widely but lived on Hopi land in the Southwest, was a true MODERNIST, incorporating international influences. A yellow-gold cuff, for instance, combines the rough texture produced by tufa casting — a technique Native Americans adopted from Mexicans in the 19th century — with a simple, minimalist silhouette whose sole decoration is a smooth, shiny hand, the symbol of Loloma’s Badger clan. 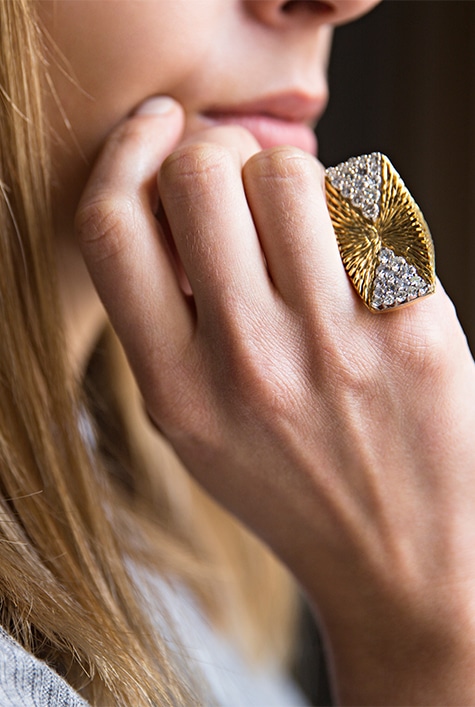 Loloma also used techniques he learned from the Algerian-born, Moroccan-raised designer Eveli Sabatie, one of his two protégés, along with his niece, Verma Nequatewa. (Ispahani Bartos sells both women’s works too.) “Loloma is known for his inlay work and his use of TURQUOISE and LAPIS. Eveli introduced him to that from Morocco and Islamic architecture and tile work,” Ispahani Bartos explains. “Interestingly, her jewelry is much more powerful and has a very strong voice, whereas Loloma made it more Hopi, which is gentler. He was a very sophisticated modernist.”

Ispahani Bartos’s scholarly inclinations have led her to do EXTENSIVE RESEARCH ON JEWELRY CREATORS. “It matters less to us who wore it than who made it,” she says. Last summer, she teamed with the Wright Gallery, in Manhattan, to mount her first jewelry exhibition, of Roberto and Heroldo Burle Marx, the brothers who helped ignite the demand for Brazilian gems before they had a falling out. (For the installation, R & Company loaned a large Roberto Burle Marx totem, as well as furniture by other Brazilian designers.) Roberto was a Renaissance man — famed for his modern landscape architecture — while Heroldo was a true lapidary. They introduced the forma livre, or free-form cut. “One brother claimed the cut, in 1948; the other claimed almost everything else,” says Ispahani Bartos, wearing can’t-miss AQUAMARINE rings — one sculpted, the other faceted — by Roberto and speculating about the roots of the brothers’ estrangement.

Although she does not mingle her personal and business collections, Ispahani Bartos says she acquires pieces for each with the same eye. “I’ve got to be able to wear it,” she says of any purchase.

Ispahani Bartos also remembers her second piece of jewelry. It was a small 18-karat-gold ring commissioned by her mother to replace the earrings at the bottom of the sea. “It had not a precious stone but a beautiful cabochon cat eye,” she recalls. “I wore it for almost thirty years.” But Ispahani Bartos doesn’t want it to sit in her drawer. She believes jewelry is meant to be worn. “I’m having it polished to give to my daughter.”

Shop The Mahnaz Collection on 1stdibs