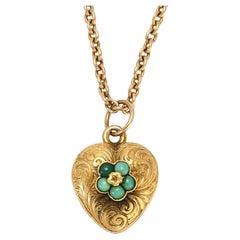 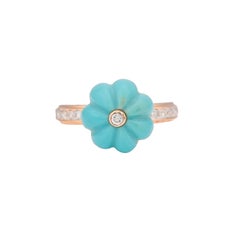 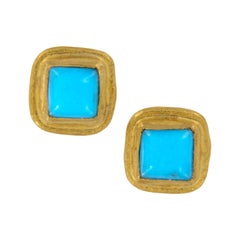 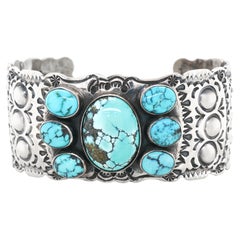 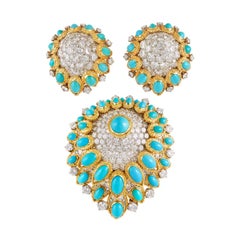 Free Shipping
Gemjunky Royal Beauty Turquoise and Fluorite Necklace
By Gemjunky
Located in Tuxedo Park , NY
This handmade double strand of beautifully glowing multi-colors of Brasilian fluorite is decorated with gemmy chunks of Royal Blue Turquoise each enhancing the other in this unique n...
Category

Free Shipping
Pure 24 Karat Yellow Gold & Turquoise Beaded Necklace
By Campanelli & Pear
Located in Troy, MI
A perfect combination - pure 24 karat yellow gold & turquoise! People the world over have revered turquoise as a good luck stone for centuries. How lucky would you be to own this rar...
Category

Free Shipping
Pure 24 Karat Yellow Gold Persian Turquoise Stud Earrings
By Campanelli & Pear
Located in Troy, MI
Nothing is more luxurious than pure 24 karat gold! It has such a warm, sunshine reminiscent color. Own these adorable turquoise earrings & bring some of that beautiful sunshine to yo...
Category

Free Shipping
Turquoise Diamond 18KT White Gold Two Hearts Made in Italy Ring
By Margherita Burgener
Located in Valenza , IT
Handcrafted in Italy, in Margherita Burgener workshop, the Two Hearts ring is an elegant and consistent cocktail ring realised in 18Kt white gold, set with diamonds to highlight the ...
Category

Free Shipping
Turquoise Diamond Cluster Ring in 14 Karat White Gold
Located in Hong Kong, HK
These photos does not do this piece justice ! This cluster ring features 4.05 carats of turquoise at the center, surrounded with 4.53 carats of pear shape turquoise on the side. Asse...
Category

Free Shipping
Amethyst Lapis Lazuli Turquoise Mother of Pearl 18 Karat Yellow Gold Earrings
By AVGVSTA
Located in Milano, IT
These gorgeous AVGVSTA earrings are crafted in 18k yellow gold and beautifully set with asscher amethysts, embellished by a band of lapis lazuli and another band in natural turquois...
Category

Free Shipping
18 Karat Yellow Gold Flying Penis in Turquoise Matrix Cufflinks
By AVGVSTA
Located in Milano, IT
This playful pair of cufflinks is made entirely in turquoise matrix. The toggle is a simple cylindrical bar with a post in 18k yellow gold, while the protagonist of the piece is sha...
Category

Free Shipping
Rose Gold Amulet Evil Eye Mother of Pearl Turquoise Onyx Cufflinks
By AVGVSTA
Located in Milano, IT
The myth of the evil eye has intrigued people for thousands of years! Believed the bring the wearer good luck, these cufflinks are made in rose gold and the eye is made in mother of...
Category

Free Shipping
Amethyst Lapis Lazuli Turquoise Mother of Pearl 18 Karat Yellow Gold Earrings
By AVGVSTA
Located in Milano, IT
These gorgeous AVGVSTA earrings are crafted in 18k yellow gold and beautifully set with asscher amethysts, embellished by a band of lapis lazuli and another band in natural turquois...
Category

The thought of vintage and antique turquoise jewelry often conjures up images of striking Navajo bracelets and necklaces worn with a denim shirt and cowboy boots. This all-American look has been celebrated by fashion designers like Ralph Lauren and Tommy Hilfiger on their runways and in ad campaigns. In the October 2016 issue of Vogue magazine, Tom Ford said he only wears turquoise jewelry at his Santa Fe ranch. So what is it about this gorgeous blue-green stone that makes us wish that we were born in December?

It’s not surprising that turquoise is abundant in New Mexico and Arizona because, according to the Gemological Institute of America (GIA), it needs to be in “dry and barren regions where acidic, copper-rich groundwater seeps downward and reacts with minerals that contain phosphorus and aluminum.

Turquoise is not found in a single crystal but is a combination of microcrystals. Its appearance, waxy and opaque, is attributed to its structure and composition. “It’s an aggregate of microscopic crystals that form a solid mass. If the crystals are packed closely together, the material is less porous, so it has a finer texture. Fine-textured turquoise has an attractive, waxy luster when it’s polished. Turquoise with a less-dense crystal structure has higher porosity and coarser texture, resulting in a dull luster when it’s polished,” notes the GIA. Since no one wants to set a dull piece of turquoise, porous turquoise is often treated to make the stone more attractive.

In the United States, there have been discoveries of turquoise from 200 B.C. It is not just loose turquoise stones that have been found, but entire suites of jewelry from prehistoric times. In the late 19th-century, the Navajo Indians, who learned silversmithing from the Spanish, started to make beads out of turquoise and eventually combined it with silver around the 1880s. Initially this jewelry was for ceremonial purposes, but it became fashionable once the tourism in the Southwest picked up in the beginning of the 20th century.

Find antique and vintage turquoise rings, necklaces, bracelets and other accessories on 1stDibs.