Marie-Christine McNally’s Spaces Are a Symphony of High Design 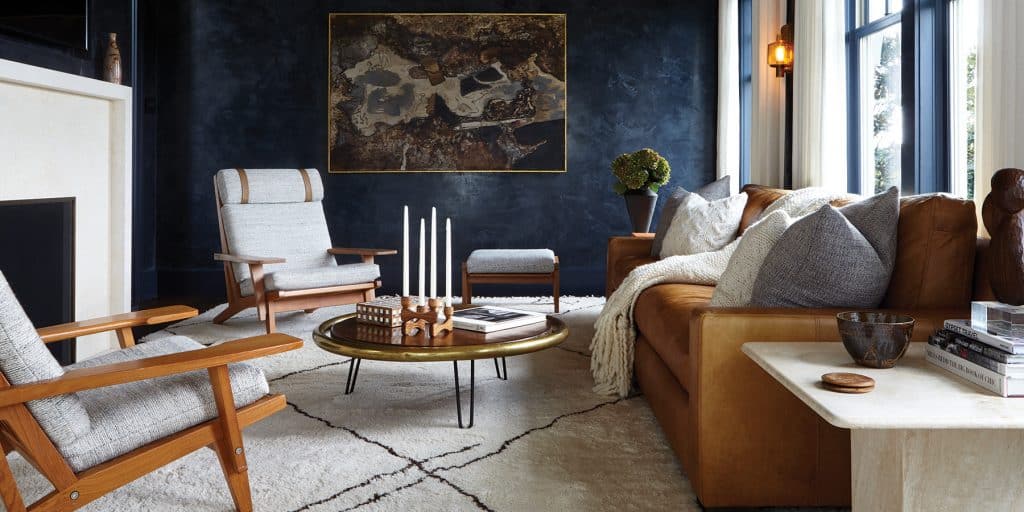 From her studio in New York's Sag Harbor, the Texas-born talent — and daughter of an antiquaire — creates residences that are clean, contemporary and filled with vintage finds.

August 11, 2019Marie-Christine McNally, whose mother is Dallas dealer Annick McNally, of Le Louvre French Antiques, came to interior design after starting out in advertising (portrait by Agata Domanska). Top: The study of a home in Watermill, in New York’s Hamptons — not far from McNally’s Sag Harbor studio — has travertine side tables from Michael Del Piero Good Design on either side of the sofa, which faces a pair of Hans Wegner armchairs. All photos by Joshua McHugh unless otherwise noted

Interior designer Marie-Christine McNally comes by her good taste at least partly the old-fashioned way — her mother, Annick McNally, has run Le Louvre French Antiques, in Dallas, for decades and is a longtime presence on 1stdibs.

But McNally, now based in Sag Harbor, New York, did not grow up thinking she would become the well-regarded designer of residences from Long Island to New York City to California that she is today.

“It just never occurred to me to pursue design, never in a million years, because she was always the design person,” says McNally, referring to her mother. After attending the University of Texas at Austin, she worked in advertising in New York for a while, but then found herself needing a change.

“I reevaluated,” she says. “I’d just bought my first apartment on the Upper West Side, which was actually two small apartments next to one another. I undertook the combination and renovation on my own.” And she enjoyed it.

For the Watermill home’s double-height living room, McNally commissioned a hanging lantern and a daybed from Michael Del Piero Good Design, from which she also sourced the fur throw atop the stool. She bought the Alessandro Albrizzi fire-tool set from the 1stdibs Gallery; the chairs are by Børge Mogensen.

After finishing that project and while still working in advertising, she went to an information session at the New York School of Interior Design. Things started to click: “I threw everything out the window and started over.” After graduating from the school, McNally worked with Julie Hillman, now an AD 100 designer, for several years before setting out on her own. Her aesthetic developed along the way.

“My early influence was my mother’s look, of course, which is country French and traditional antiques,” she says. “But I was then exposed to more modern, contemporary, eclectic design. I think ultimately I landed in the middle. My interiors feel clean and contemporary, but I actually put a lot of vintage or antique pieces in them.”

Creating notes of warmth and whimsy, a pair of hanging-swing sofas flank a fireplace in the residence’s screened porch.

High-style moments are certainly in McNally’s wheelhouse. In a five-bedroom home in Silicon Valley’s Atherton, she hung a stunning mauve de Gournay Plum Blossom wallpaper in the dining room, then put silk-velvet on the vintage chairs surrounding an acacia slab-top table from Hudson Furniture.

But she can also do casual. Much of McNally’s work is in the Hamptons, and for Watermill clients with a modest south-of-the-highway house, the brief was to create an easygoing getaway. “They entertain quite a bit, but it’s really flip-flop or barefoot entertaining,” she says. The dining room she created sports a custom circular fumed-oak table surrounded by a steel band — simplicity itself. She dressed it up, just a tad, with two vintage pieces: Charles Dudouyt dining chairs with a tapering splat, upholstered in a blue wool trimmed with leather (from Conjeaud & Chappey), and a J.T. Kalmar Tulipan chandelier that gathers together dozens of glass orbs.

Another Watermill home, this one owned by a young family for whom she also did a place in Tribeca, is particularly illustrative of her approach. McNally is extremely collaborative, so she embraced the clients’ idea of turning the Watermill dining room into a playroom. Instead of a table, the space centers on a whimsical teepee that contains all the kids’ stuff so — at least when it’s put away — it doesn’t spill into the other rooms.

Marie-Christine McNally’s Spaces Are a Symphony of High Design 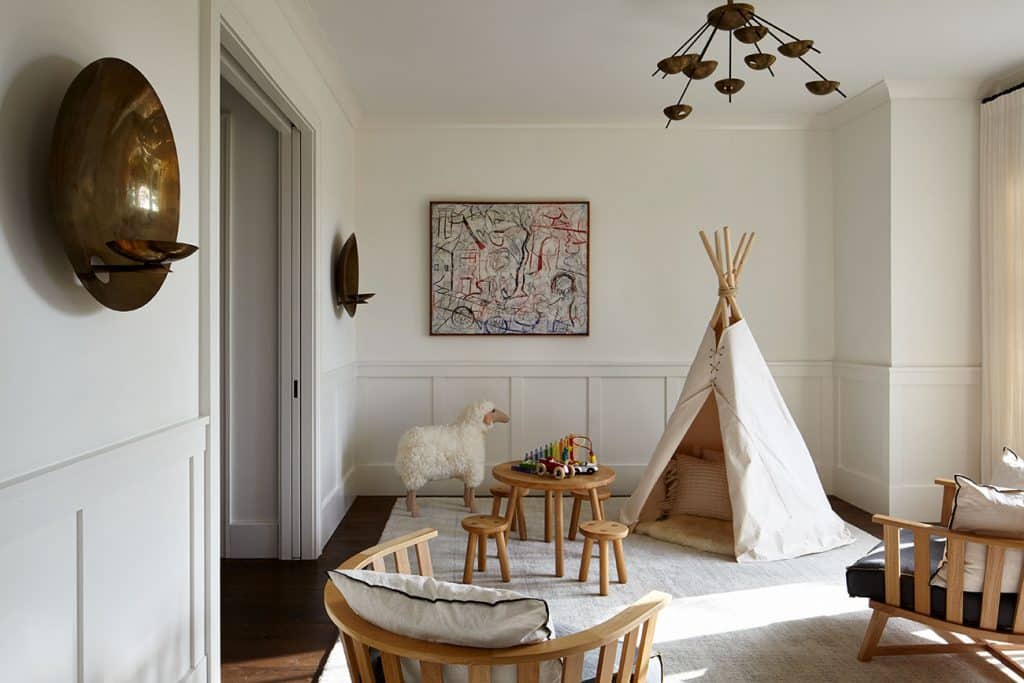 Based in Sag Harbor, on New York’s Long Island, designer Christine-Marie McNally creates carefully considered, clean-lined interiors that mix new and vintage pieces. At a home in the Hamptons town of Watermill, not far from her HQ, McNally turned the dining room into a playroom. The teepee keeps toys out of sight when not in use. The painting, from R.E. Steele, is believe to be by Irene Ritter. The ceiling light is from Lucca & Co.; the sconces are vintage. 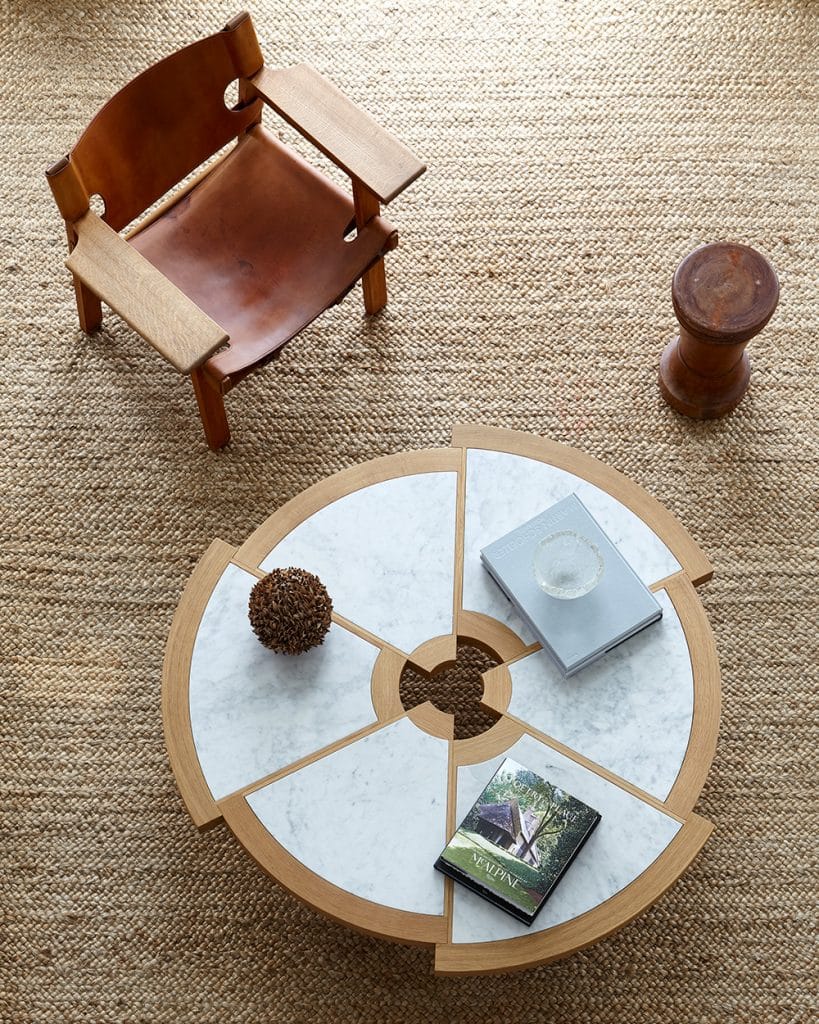 In the living room, a Børge Mogensen chair sits at a Charlotte Perriand Rio table reissued by Cassina, which was purchased from Monc XIII. 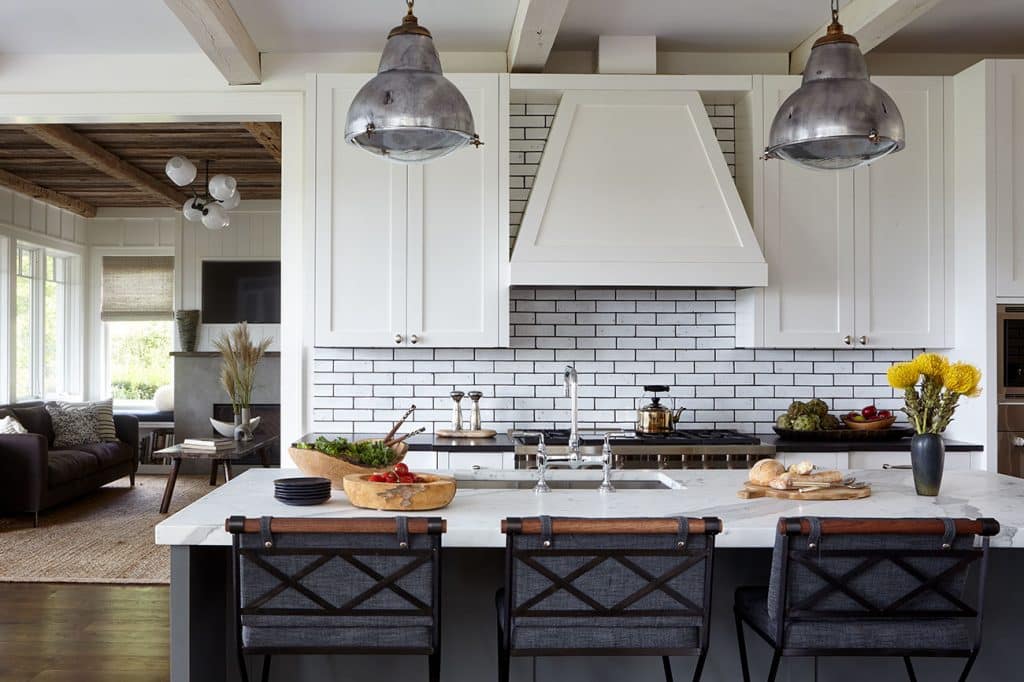 Stools by Thomas Hayes tuck under the kitchen island, which is illuminated by pendant lights from Avant Garden. 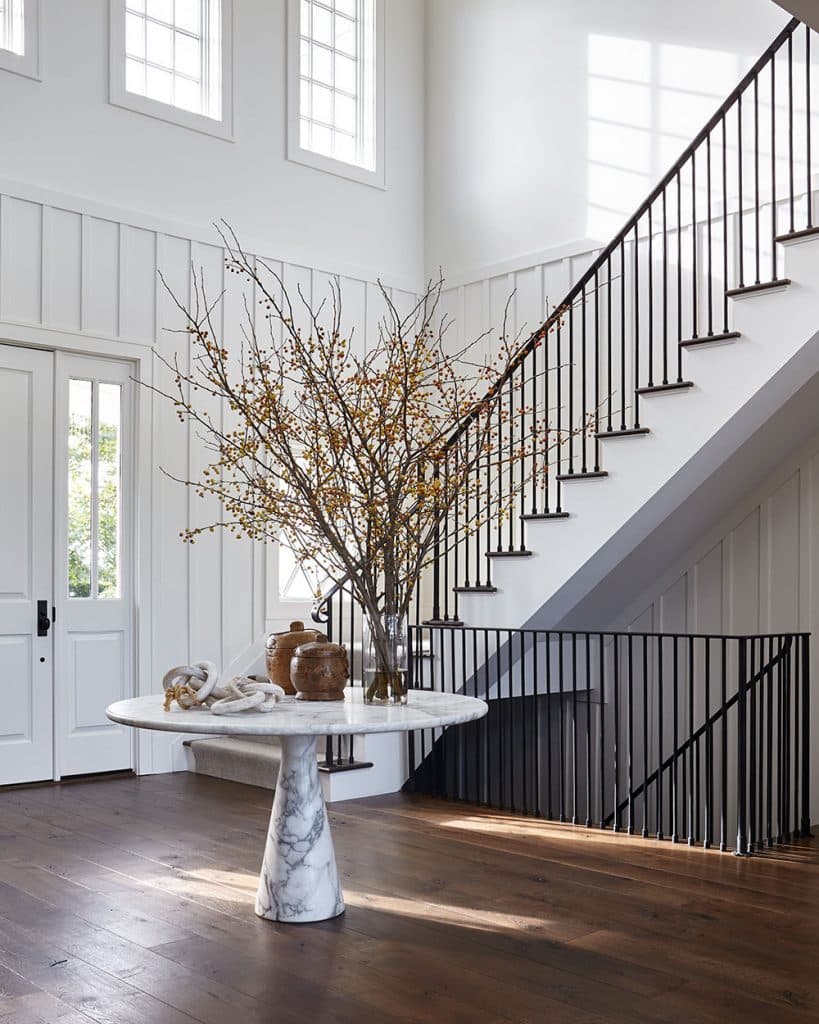 The home’s light-filled double-height entry hall centers on a marble table by Angelo Mangiarotti that McNally found at the 1stdibs Gallery. 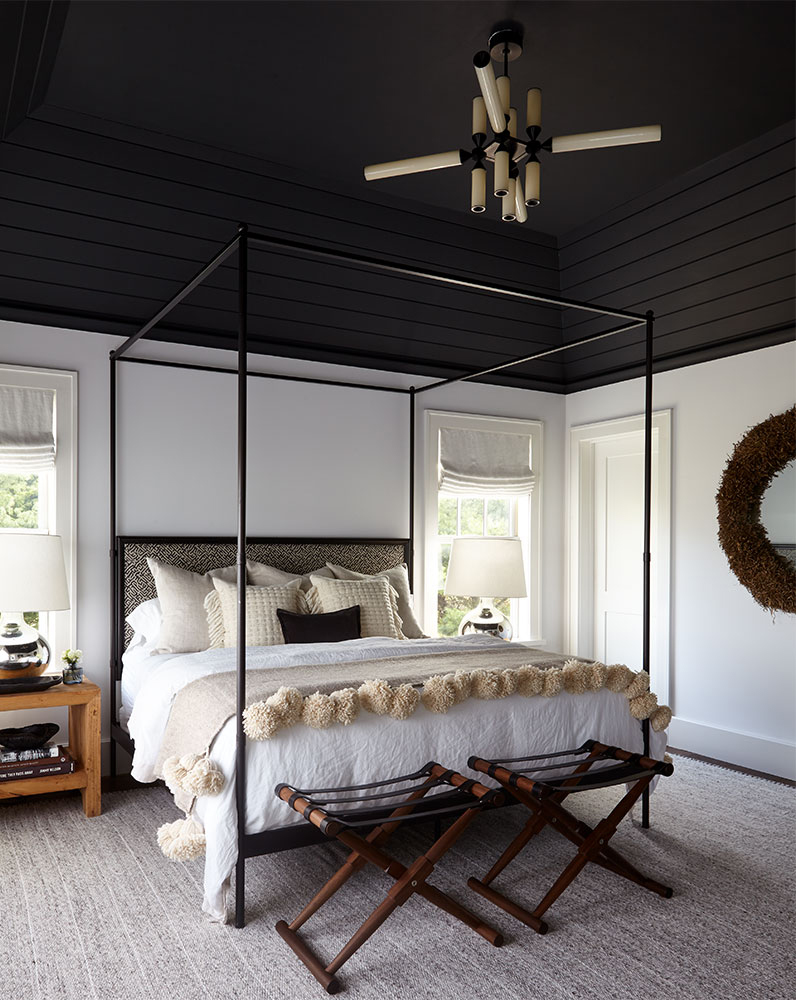 Two mercury lamps from JED sit on the homeowners’ own nightstands in a guest bedroom. The clients also already owned the bed, whose headboard McNally reupholstered in a Zak & Fox fabric. The throw is from L’Aviva.

In a corner of the guest bedroom, a hanging chair dangles in front of a six-drawer pine chest from JED and the Bert Stern photograph Lolita. 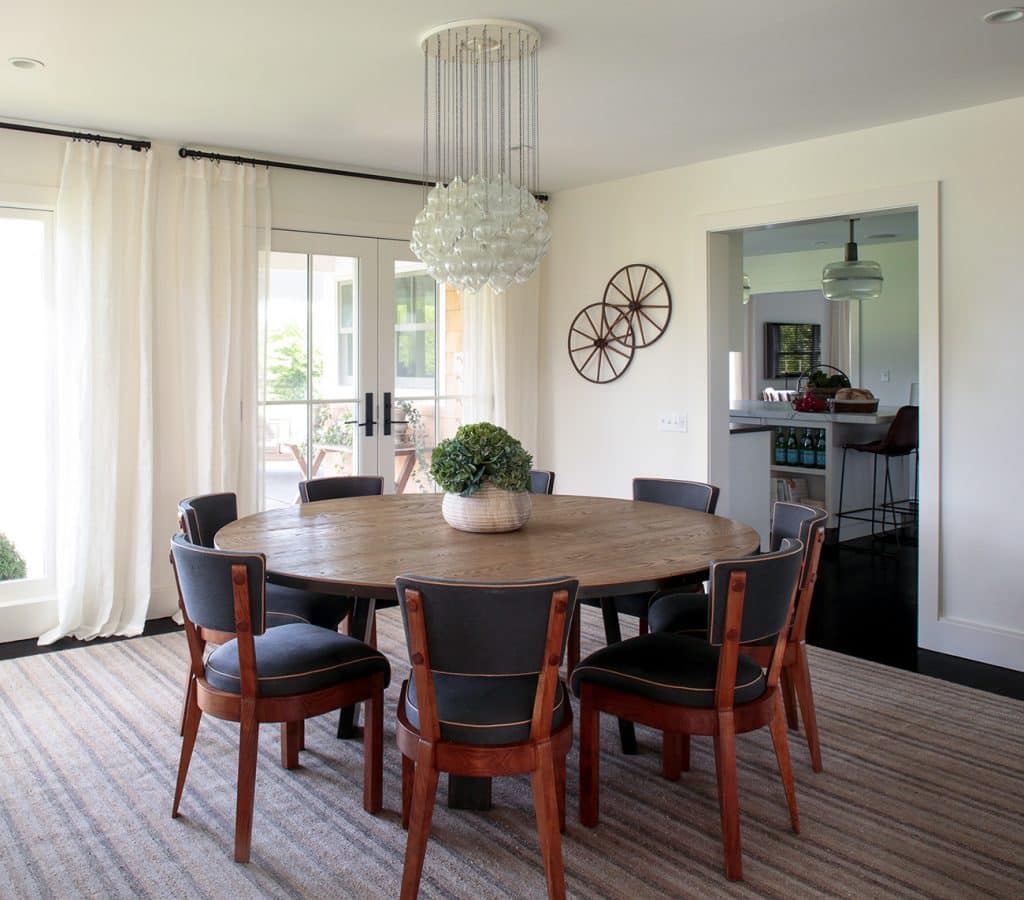 Vintage Charles Dudouyt chairs from Conjeaud & Chappey surround a custom table of McNally’s own design in the dining room of another Watermill house. The chandelier is by J.T. Kalmar. Photo by Eric Striffler 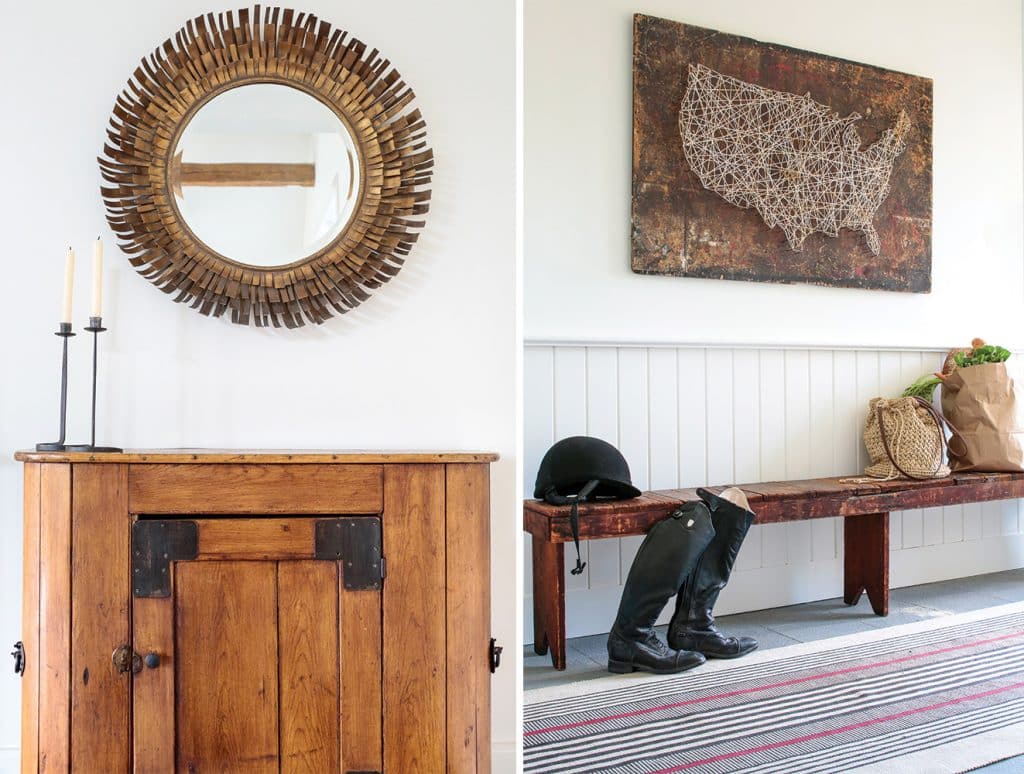 Left: A Curtis Jeré mirror hangs in the home’s entry above a vintage pine cabinet from the estate of Bill Blass. Right: In the mudroom, a vintage bench sits under a map of the U.S. that the homeowners purchased at a local antique show. Photos by Eric Striffler 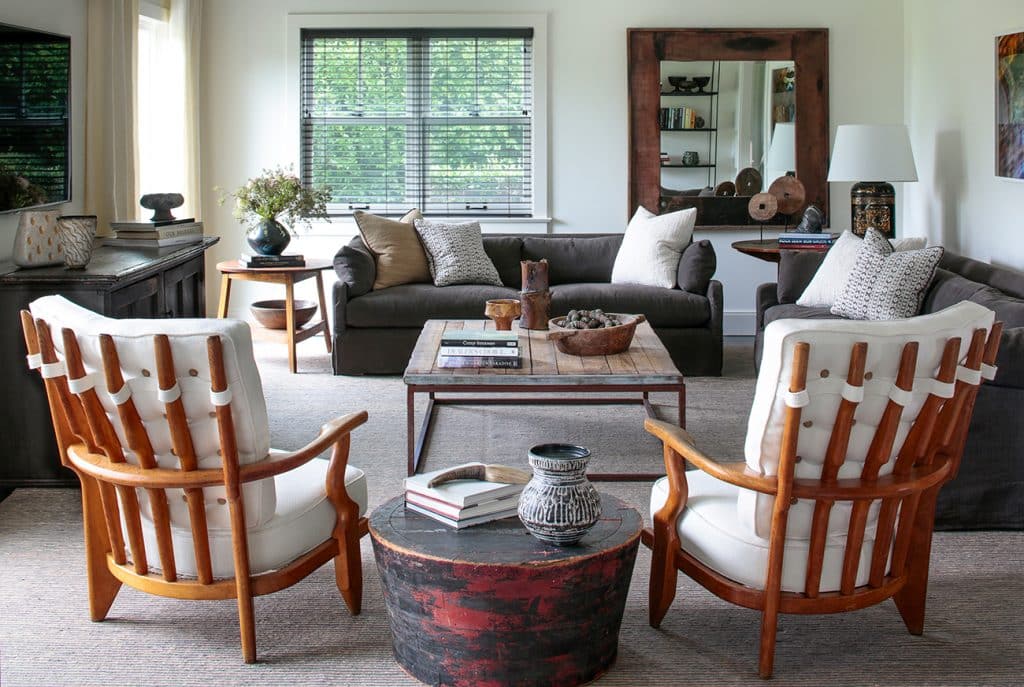 A mix of contemporary and antique furnishings fills the home’s den. McNally obtained the Guillerme et Chambron chairs in the foreground on a buying trip in France. The table between them is vintage, while the sofa and coffee table are new. Photo by Eric Striffler

Practicality can be chic: In the home’s kitchen, Hans Wegner Wishbone chairs might seem too high-style for eating fish fingers with ketchup around a classic Saarinen Tulip table, so McNally put sheepskin throws on the seats. If they get dirty, they can be washed. “I don’t do upholstery that’s going to get trashed,” she says, “and these look great.” She also installed a banquette, a seating form she often uses for comfort, since “everyone gravitates to the kitchen.”

In the master bedroom of another Watermill house, McNally laid vintage kilim area rugs from Balsamo that, she says, “would coordinate with, and build on, the pieces already in the room.” These included the clients’ own desk and bed, over which hangs a vintage starburst mirror. Photo by Eric Striffler

The study has a mix of vintage finds, like a pair of Hans Wegner GE-375 chairs from 1stdibs, and contemporary works, including lighting by the designer Billy Cotton, which appears throughout the house. Cotton’s custom ceiling fixture presides over a mid-century wooden coffee table embraced by a brass rail and standing on metal pin legs. A pair of mid-century travertine side tables flank a leather sofa the clients owned. 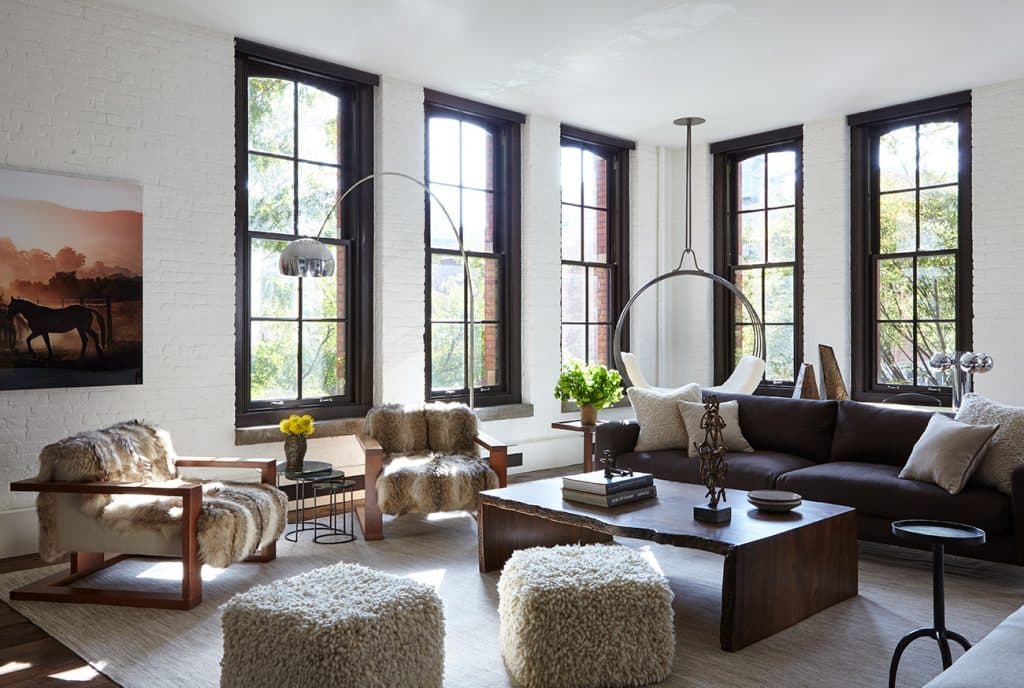 The owners of the first Watermill home also commissioned McNally to design their apartment in Manhattan’s Tribeca neighborhood. Its living room sports a pair of Shimna Caribou chairs from Sentient that are covered in coyote pelts and a shearling-upholstered hanging chair in a sun-drenched corner. The pair of poufs in the foreground are from Monc XIII.

In the dramatic double-height foyer and living room, large windows offer scenic views of fields and farms. A catwalk runs across the top of the space, connecting the master suite to the rest of the second floor. A custom iron lantern designed by Michael Del Piero hangs in the center of the living area, illuminating vintage leather-seated Børge Mogensen chairs and Cassina’s Rio table, the latter from Monc XIII. A custom daybed reminds you that a beach house is for relaxing. 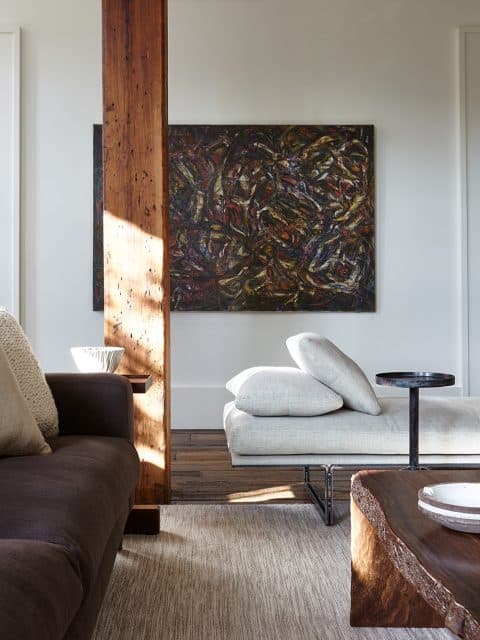 Elsewhere in the Tribeca apartment, a painting attributed to Robert Stone is mounted over a clean-lined daybed.

The family’s Tribeca residence is a loft-like apartment on Clarkson Street. There, McNally put a 14-bulb fixture by Lindsey Adelman in the dining area over a customized oak table with a wax finish. Its branch-like arms echo the vertical posts of the vintage Danish dining chairs, which are upholstered in a Ralph Lauren black leather.

The living room is a symphony of rounded shapes — including a snazzy circular hanging chair — and soft surfaces, such as a pair of Sentient Caribou chairs upholstered in coyote pelts. As always, there are plenty of vintage finds, like a Cherner bentwood swivel chair, bought from Horseman Antiques and covered in patent leather.

McNally has evolved into a creator of distinct and beautiful rooms, but she still gives credit to her mother for steeping her in an aesthetically sophisticated world early on. “I guess it kind of  runs in our blood,” she says. “I just love this process.” 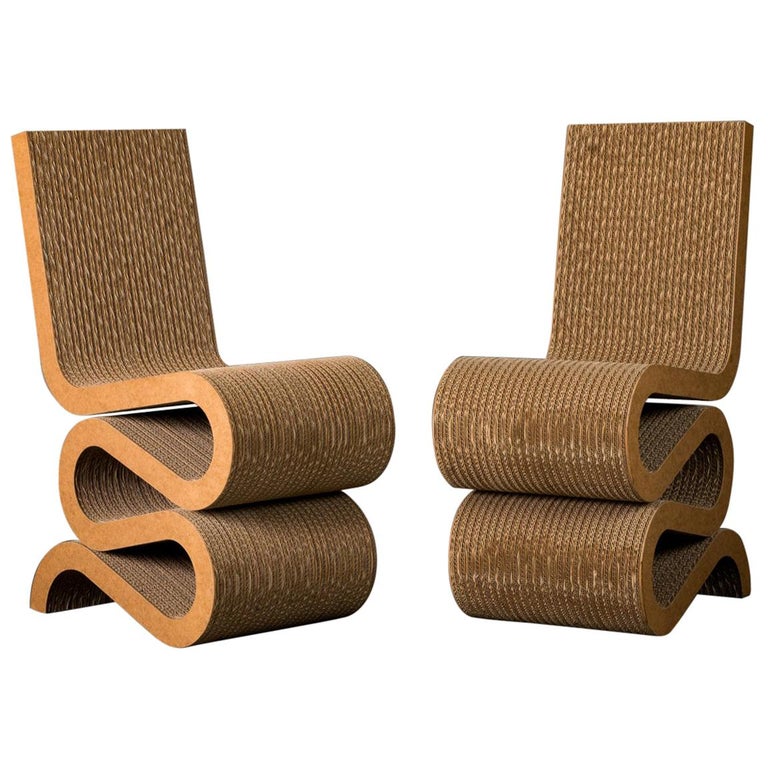 “The combination of the unexpected material of these chairs and their sculptural quality makes them so appealing. They are like pieces of art.”

“These sconces are beautiful. I like the contradiction between the hard industrial material and the sinuous, curvy design.” 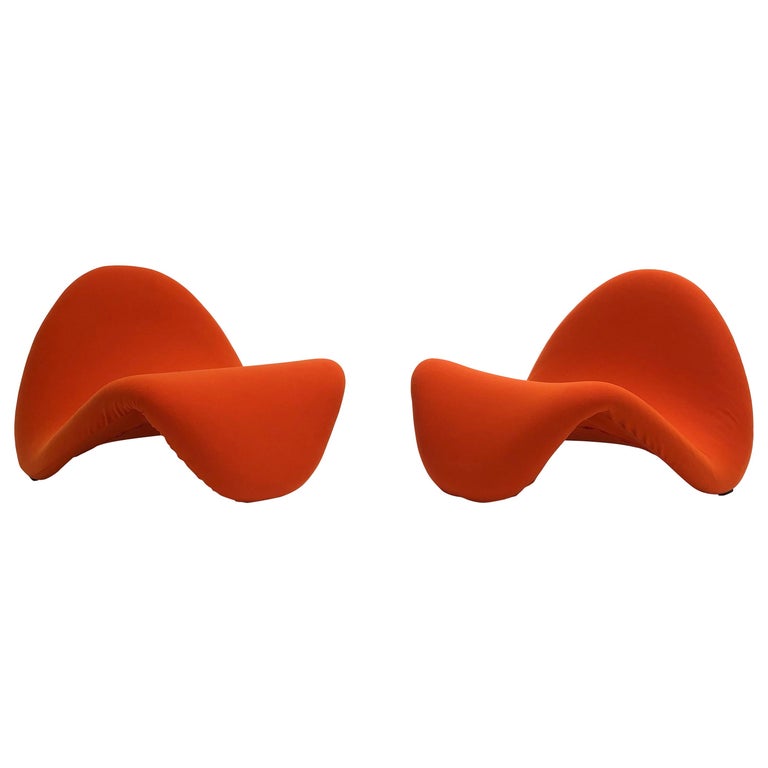 “I love chairs by Pierre Paulin, especially these simple and playful forms. Upholstered in a nubby wool or shearling, placed in a master bedroom, they would be the ultimate — sexy yet understated.” 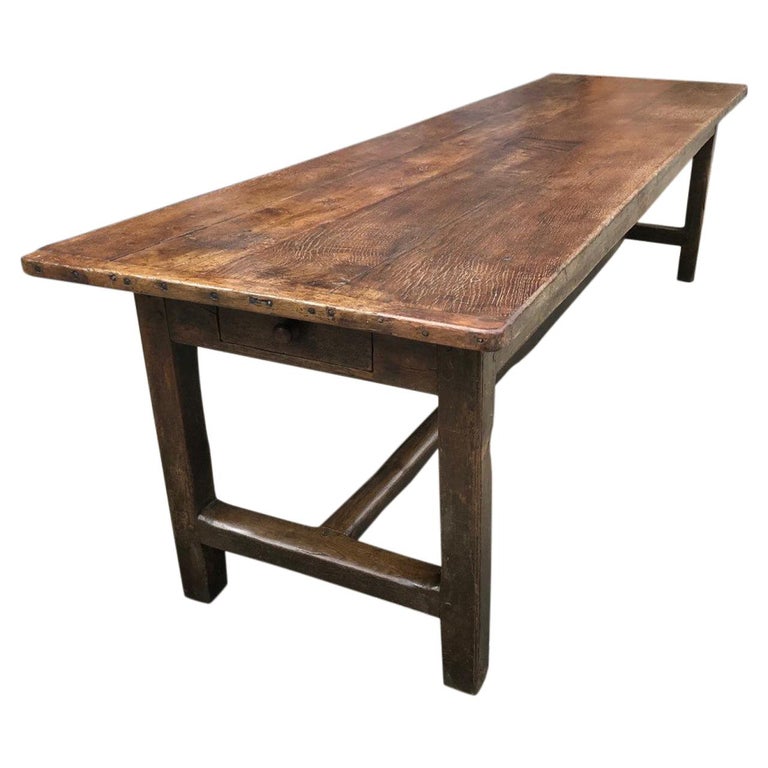 “This is a spectacular foyer table. It’s massive, simple and rich in its color and patina. It would obviously work well as a dining table in a country house, but I would prefer to see it standing on its own, so that it could be highlighted and enjoyed from every angle.” 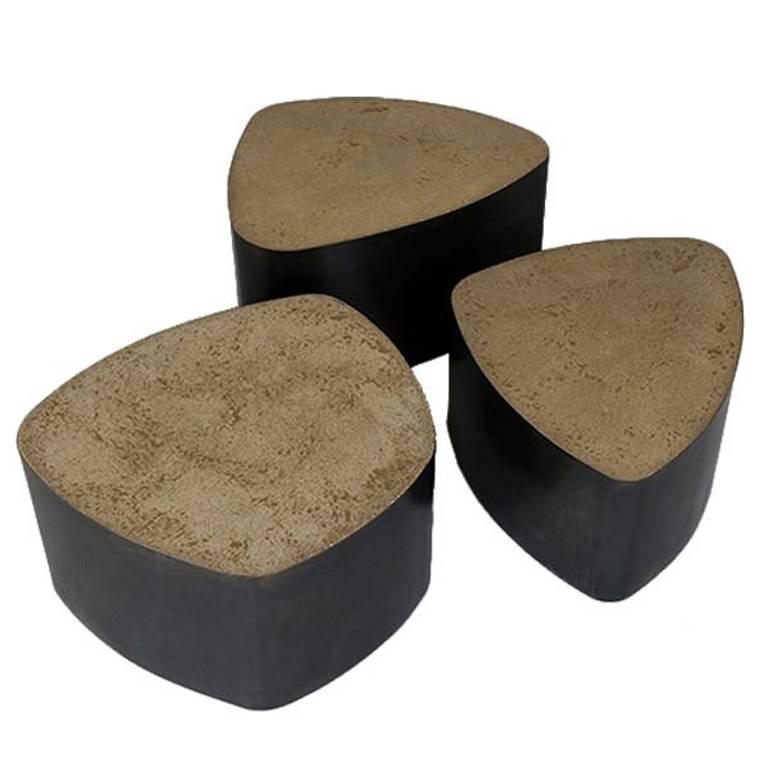 “I got to meet Stephane Ducatteau a few years ago and am a huge fan of his work. The finishes of his metal are deep and rich and varied, and his designs are interesting and unique. Again, I love the contradiction between the industrial materials he uses — metal and concrete — and the sophistication of his designs. These tables are showstoppers!”

“These Billy Cotton chandeliers are simple and delicate but very dynamic at the same time. They’re like little jewels — the perfect accessory to complete a space.”