Explore the New York That Might Have Been - 1stDibs Introspective 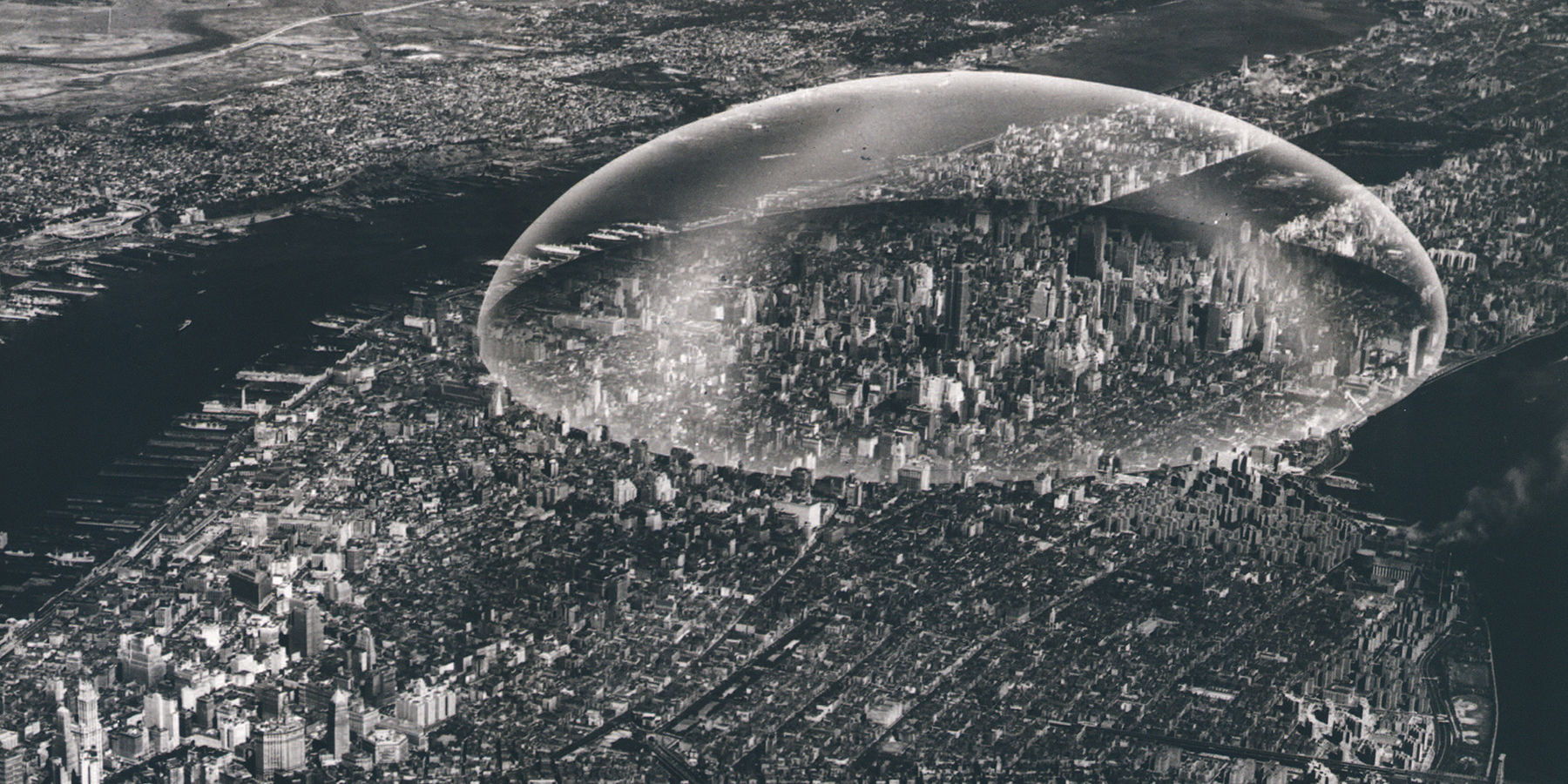 A new book delves into the architectural projects that, for better or worse, would have drastically changed the city — had they come to fruition. 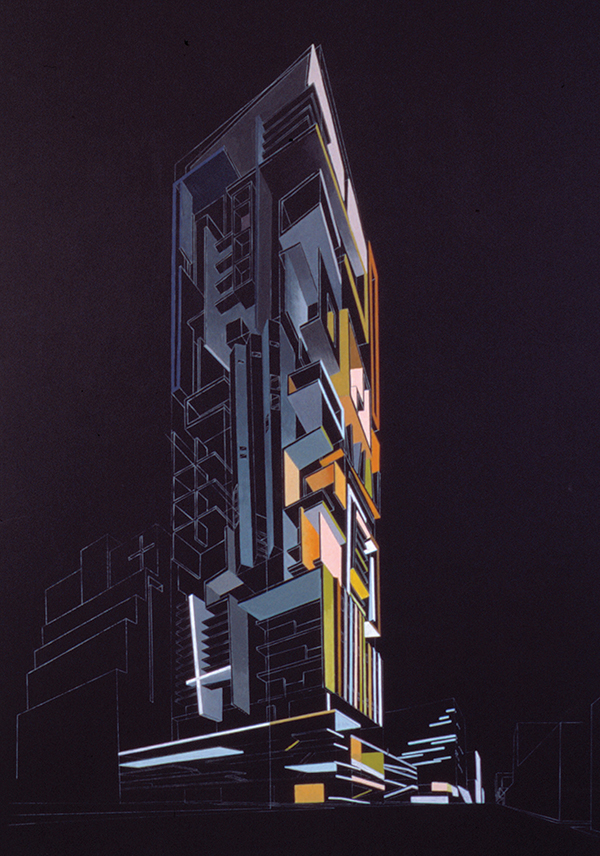 A follow-up to their fascinating first book on the unrealized architectural and urban-planning projects of Los Angeles, Sam Lubell and Greg Goldin’s Never Built New York (Metropolis Books) explores the city that might have been through proposals as diverse as Zaha Hadid‘s 1994 scheme for a Times Square hotel tower (above, illustration courtesy of Zaha Hadid Architects) to Buckminster Fuller’s 1961 plan to build a two-mile-wide dome over Midtown (top, image courtesy Stanford University Libraries).

Who knew that before he died, in 1959, Frank Lloyd Wright proposed turning the decommissioned Ellis Island into a futuristic residential enclave? Wright’s scheme included apartment buildings suspended from cables and giant multicolored domes that sheltered theaters, churches, hospitals and schools. As rendered by Wright’s minions, it looks like a rejected set for The Wizard of Oz or perhaps a Jules Verne–styled theme park. Outlandish but endearing.

Wright’s Ellis Island scheme is one of hundreds of gems uncovered by Sam Lubell and Greg Goldin, the authors of Never Built New York (Metropolis Books), a successor to their equally engrossing Never Built Los Angeles. Sure, New York has plenty of icons — the Empire State and Chrysler buildings, the Statue of Liberty, Grand Central Terminal. But as this book makes clear, you could create a pretty good city from the schemes that failed. Flipping through it is like taking a trip to that city.

Many of the earliest proposals were efforts to make the new world resemble the old. The approach of the city’s first visionaries, the authors explain, “was to root around in Europe, ancient and contemporary,” to find structures worth copying. Even the gigantic statue of a Native American chief designed by sculptor Daniel Chester French — part of the National American Indian Memorial proposed for the Staten Island waterfront in the first decade of the 20th century — would have rested (ironically) on a neoclassical base.

The book goes beyond individual buildings, cataloguing countless schemes for improving, even enlarging, the city — in the 1860s, the prominent surveyor James E. Serrell proposed filling in the East River to create developable land. Other ideas involved making Manhattan easier to get to and from, with all manner of bridges, and up and down: Alfred Ely Beach proposed using air pressure to “shoot” passenger capsules through underground tubes.

For much of the city’s history, the authors say, “ideas generally trickled up from a citizen cadre of dreamers, tinkerers, engineers and architects.” That’s what makes so many of the proposals enchanting. But as the 20th century progressed, trickle up was replaced by top-down planning, thanks largely to Robert Moses. Moses, of course, was a prolific builder, responsible for everything from the Cross Bronx Expressway, the Triborough Bridge and the Brooklyn-Battery Tunnel to several enormous public pools. But in this alternative universe, he is represented only by projects that never were realized. New Yorkers should be glad that most of them — including plans to sacrifice Greenwich Village to a highway — were stopped. Other buildings that would have hurt the city include I.M. Pei’s skyscrapers amid Columbia University’s majestic low-rise campus and Mies van der Rohe’s Battery Park Apartments, a trio of towers that ignores what makes New York, New York. 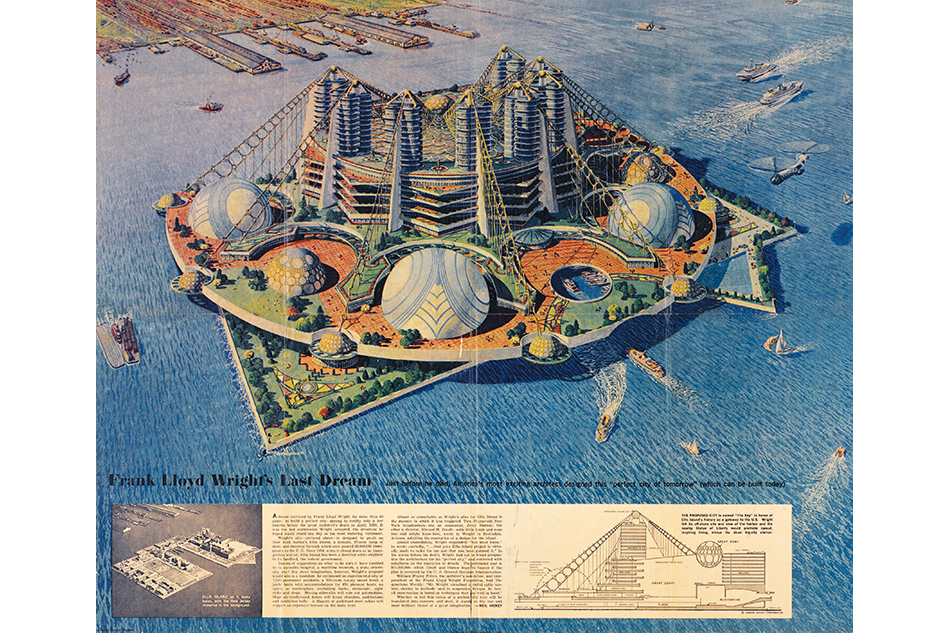 In 1959, in one of his last schemes before his death later that year, Frank Lloyd Wright designed a “completely self-contained city of the future” — as its developers described it — for New York’s Ellis Island. (It had ceased to serve as an immigrant-entry point earlier in the decade.) Wright envisioned a circular dais atop the rectangular island with housing for thousands and a 500-room hotel. Air-conditioned domes would hold hospitals, theaters, schools and more, while moving sidewalks would replace automobiles. Illustration courtesy of Columbia University, Avery Architectural and Fine Arts Library: Drawings and Archives 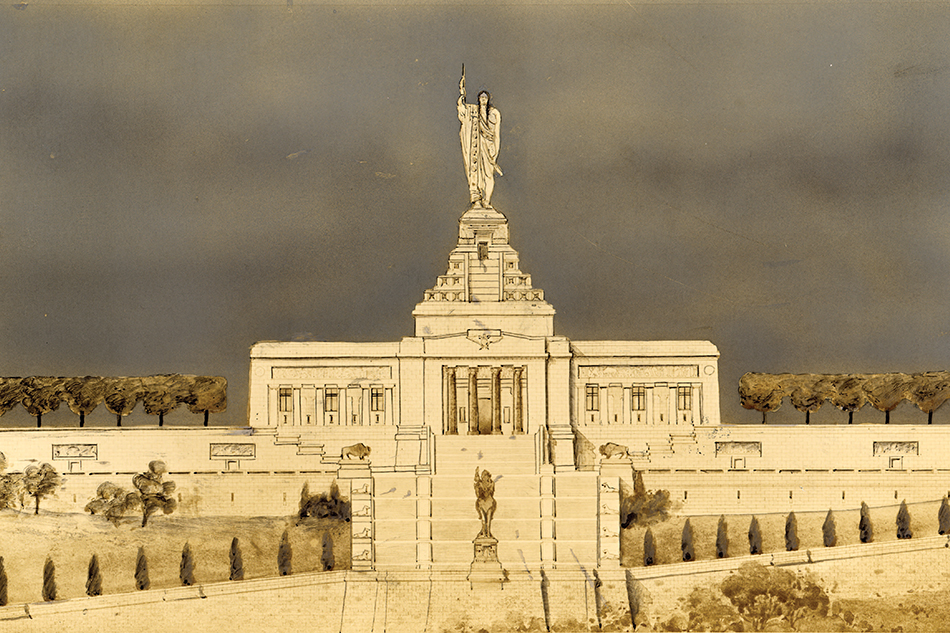 Conceived by Rodman Wanamaker, the son of retailer John, the National American Indian Memorial was to stand in Staten Island’s Fort Tompkins as a counterpoint to the Statue of Liberty. Sculptor Daniel Chester French and architect Thomas Hastings — of Carrère and Hastings, the firm behind the main branch of the New York Public Library — shared design duties. French handled the monumental statue of a Native American chief, and Hastings the museum at its base. Illustration courtesy of Indiana University, Bloomington, Mathers Museum of World Cultures 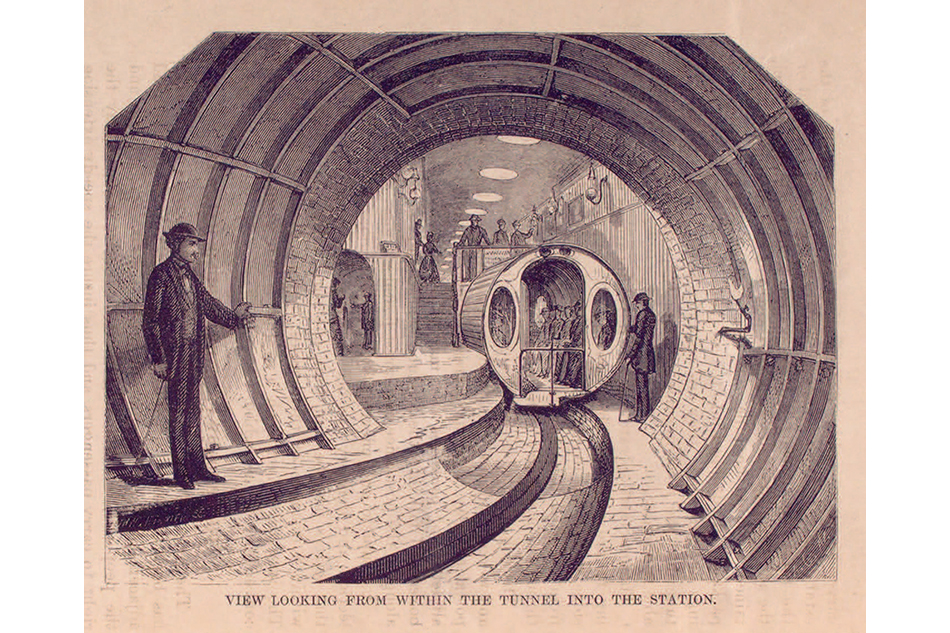 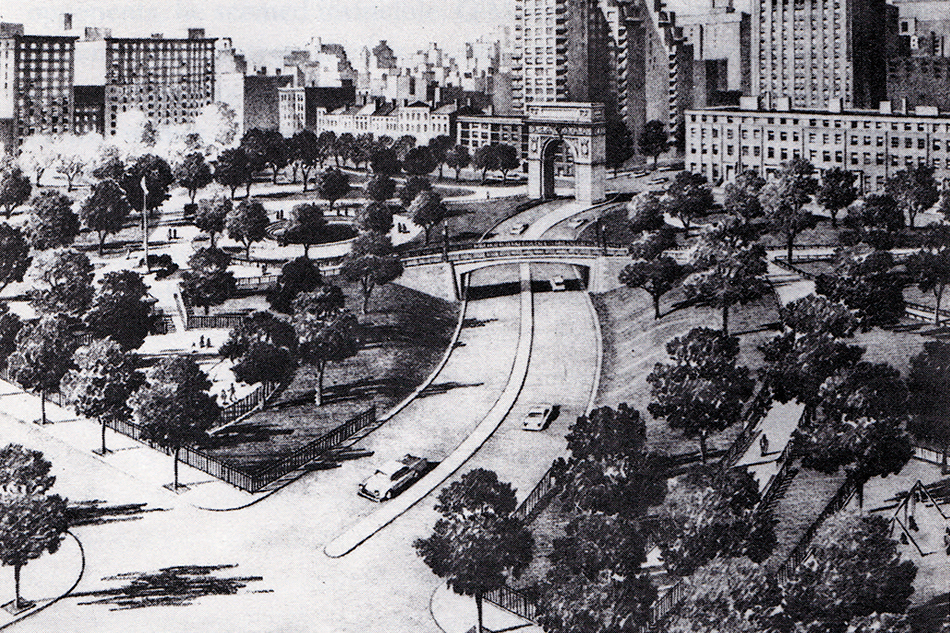 Robert Moses planned to extend Fifth Avenue south through Washington Square Park and on into the super-blocks of apartment towers he’d conceived for the meandering streets of Greenwich Village. The authors describe this scheme as “an idealized Disneylike Autopia where once had stood a warren of confused lanes.” Such prominent personalities as Eleanor Roosevelt, Margaret Mead and Norman Vincent Peale banded together to oppose Moses’s plan. Illustration courtesy of New York City Municipal Archives 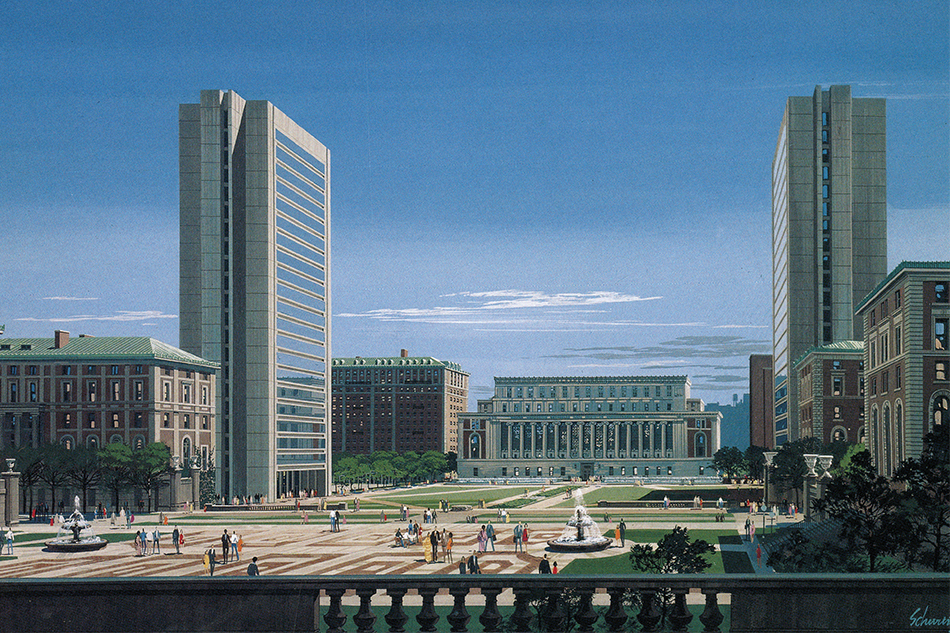 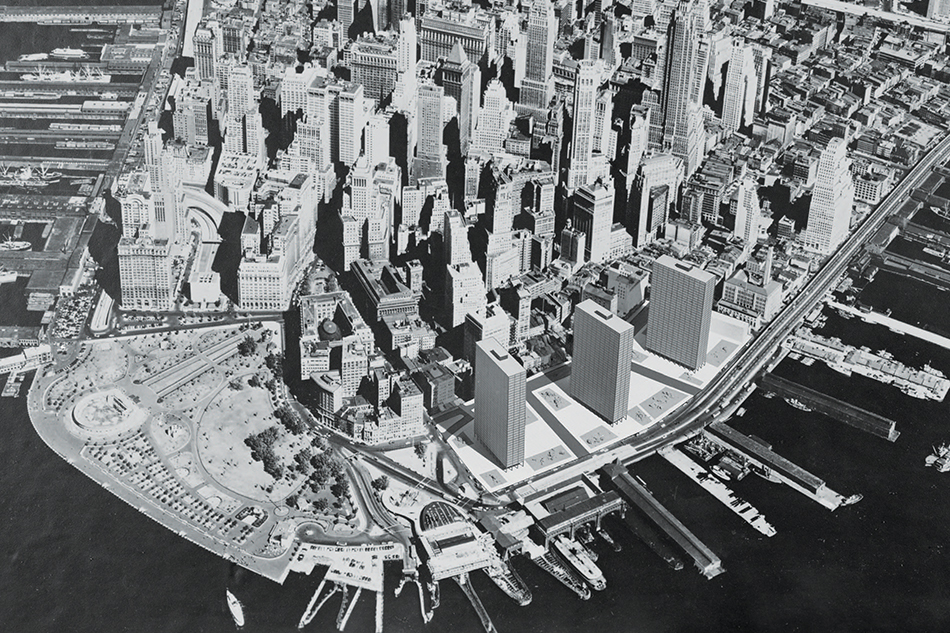 In keeping with his penchant for superblocks, Moses’s plans for the Battery Park Urban Renewal Area saw Chicago developer Herbert Greenwald working with Mies van der Rohe to do away with cross streets and low-rise structures, replacing them with a trio of apartment towers. Greenwald and van der Rohe had previously collaborated on the Windy City’s now-iconic Lake Shore Drive Apartments, among other residential endeavors, including the developer’s own Connecticut home. Drawing courtesy of the Chicago History Museum 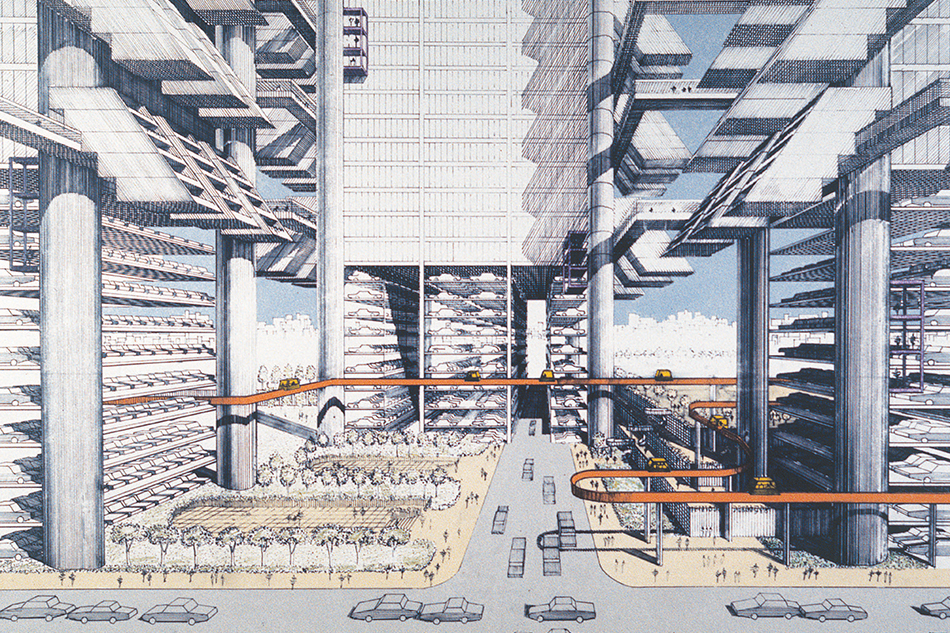 After Moses largely failed in his attempts to create an above-ground highway connecting the West Side’s Holland Tunnel to the East Side’s Manhattan and Williamsburg bridges, architect Paul Rudolph proposed burying the roadway and erecting a massive complex of buildings, bridges, monorails and pedestrian tubes above it. He described this City Corridor scheme of 1967 as “a complex of connected buildings and spaces on a very large scale that can be used conveniently and easily by people.” Illustration courtesy of the Library of Congress: Department of Architecture, Design, and Engineering 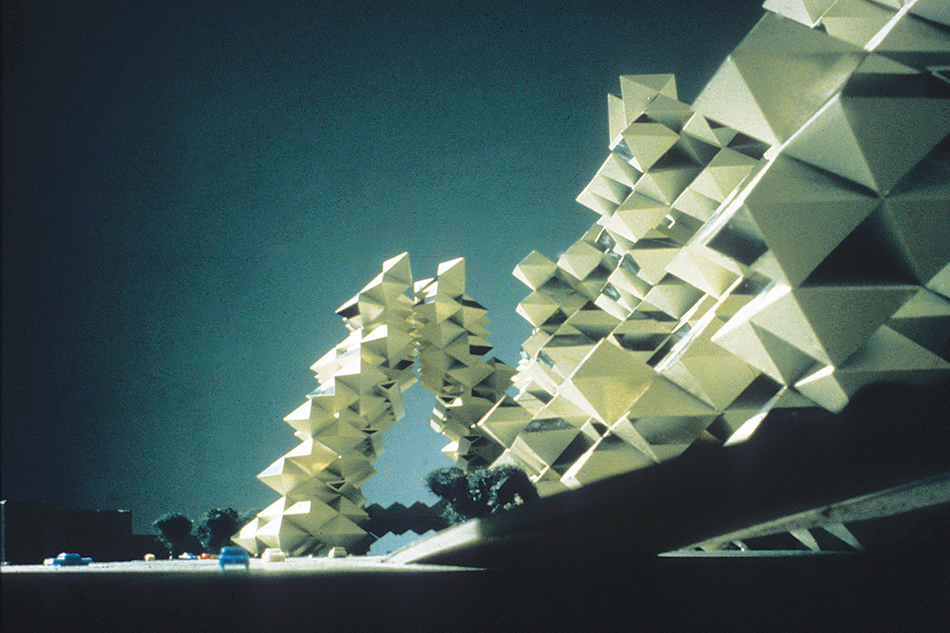 Architect Moshe Safdie’s modular precast-concrete housing system Habitat made its debut at Expo ’67, in Montreal, and he later proposed two iterations of it for New York. Safdie intended the first, seen here, for a narrow strip of land between the FDR Drive and the East River. Conceived in 1968, it would have risen some 40 stories and comprised residences, retails space and, at its base, a marina. Image courtesy of Safdie Architects 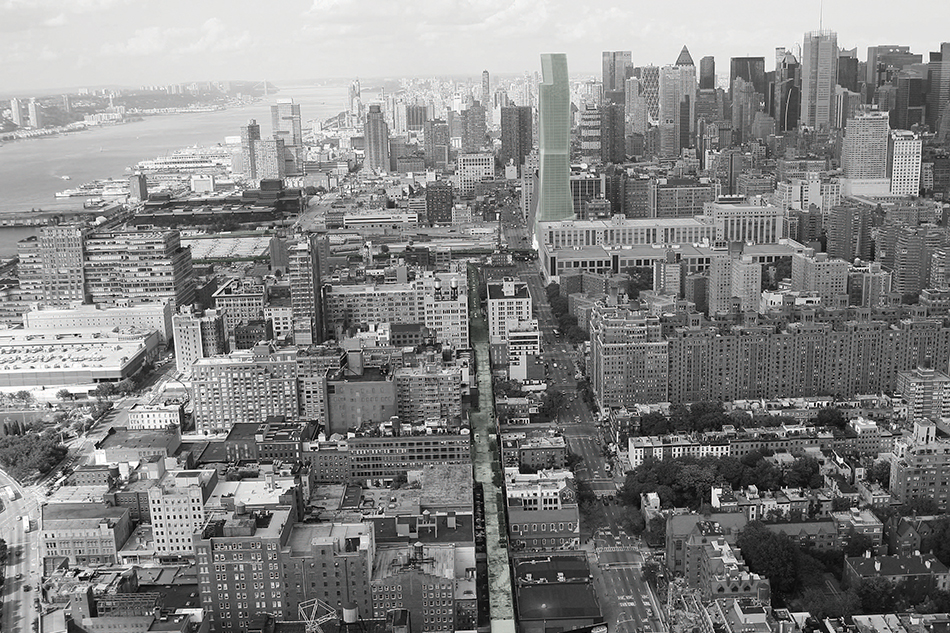 “Green lines would run up the tower, as if the High Line’s tracks and parkland had followed their way up the building,” the authors write of Steven Holl’s proposed residential and hotel structure for the northern end of the West Side’s elevated park. “The upward thrust of the skyscraper was to be enhanced by an undulating skin recalling the peeling bark of a massive birch tree.” Image courtesy of Steven Holl Architects 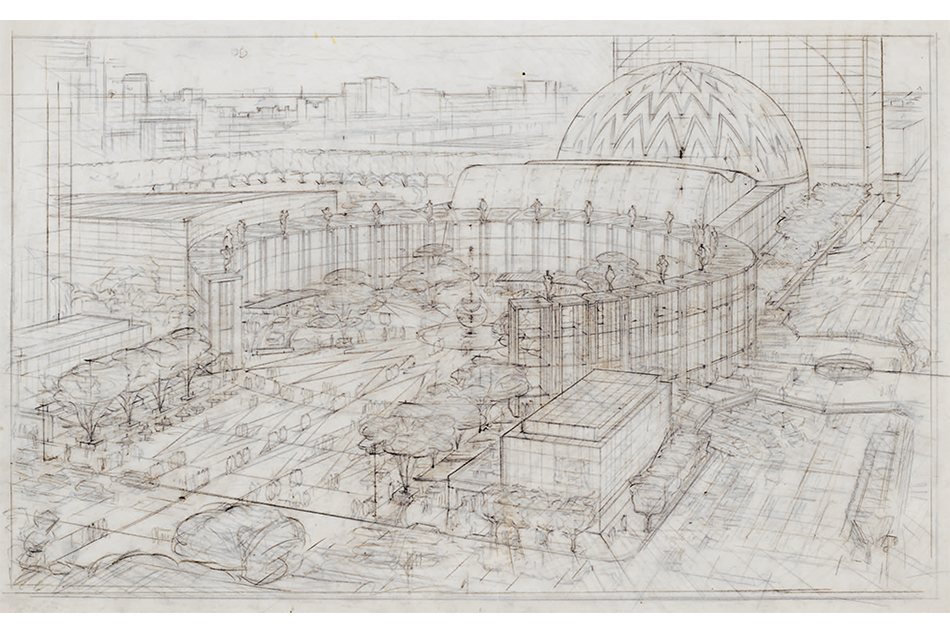 In the mid-1950s, Wallace K. Harrison, of the firm Harrison & Abramovitz, created some 50 different proposals for the Metropolitan Opera House and the Lincoln Center campus buildings surrounding it. One of them — which owes a debt to St. Peter’s Basilica in Rome and the piazza in front of it — featured a domed concert hall behind a horseshoe-shaped colonnade. “The idea,” the authors write of these fantastical schemes, “was to re-create classical grandeur and cultivation in a modernist vocabulary.” Drawing courtesy of Columbia University, Avery Architectural and Fine Arts Library: Drawings and Archives 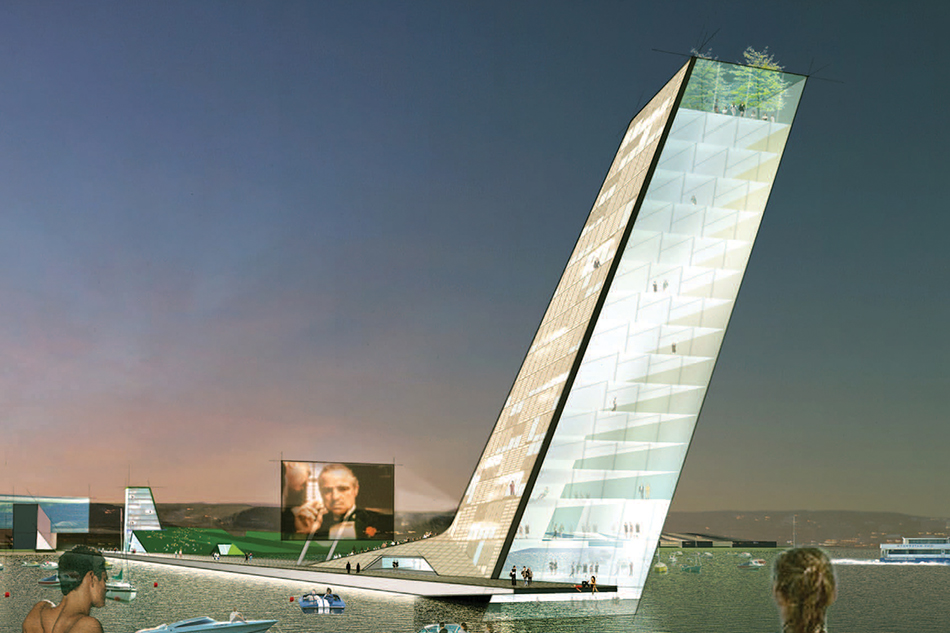 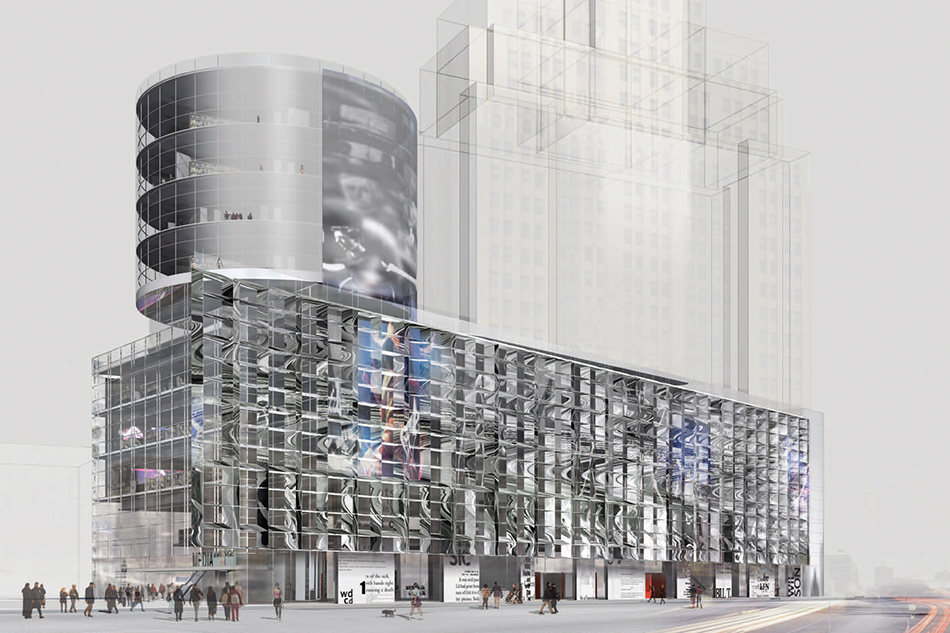 Jean Nouvel created this scheme for the Brooklyn Visual and Performing Arts Library in 2002. The commission eventually went to Enrique Norten and his firm, TEN Arquitectos, but even their plan went unrealized. Illustration courtesy of Ateliers Jean Nouvel 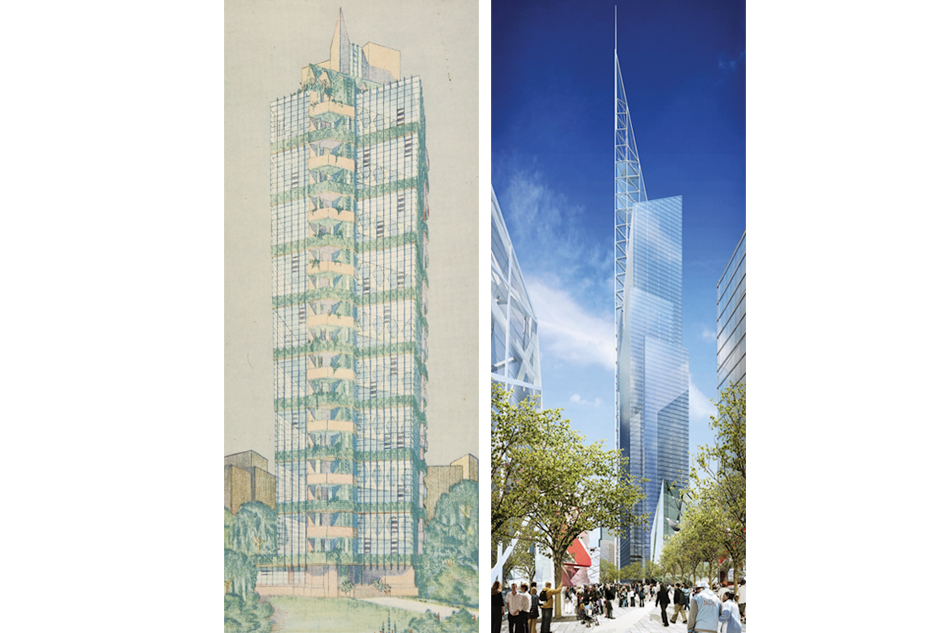 Left: Wright’s 1927 concept for concrete-and-glass towers in New York’s East Village took its inspiration from the structure of a tree. He designed the buildings to be supported by four hexagonal cores off of which the floor plates cantilevered, like branches. Although the architect never saw the idea implemented in New York, he deployed a similar concept in Bartlesville, Oklahoma’s H. C. Price Company Tower 30 years later (illustration courtesy of Columbia University, Avery Architectural and Fine Arts Library: Drawings and Archives). Right: Daniel Libeskind — who wrote the book’s foreword — conceived this 1,776-foot-tall tower as part of his 2002 master plan for the World Trade Center (illustration courtesy of Studio Daniel Libeskind). 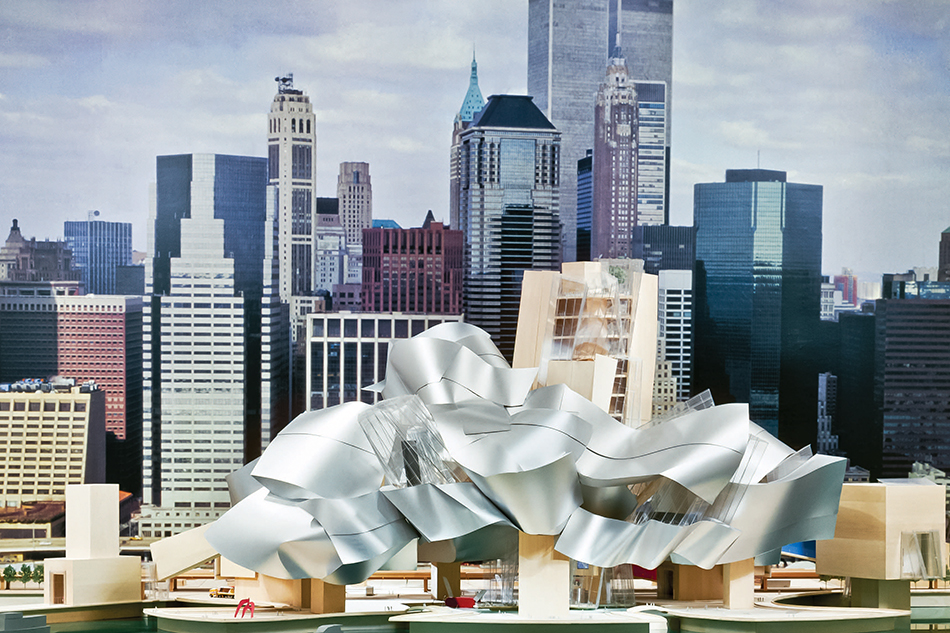 In 2000, then-New York Times architecture critic Herbert Muschamp admiringly described Frank Gehry‘s concept for a downtown Guggenheim Museum as “an icebreaker of a design, a plan for crunching through rigid streetscapes and frozen minds.” Rendering courtesy of Guggenheim Museums and Foundation/Gehry Partners 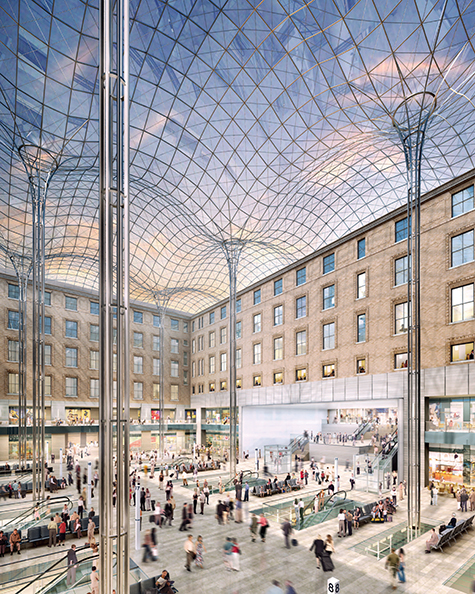 That said, most of the proposals featured here — each with a few hundred words of informative text — would have been good for the metropolis. Buckminster Fuller’s domed stadium for the Atlantic Yards in Brooklyn might have kept the Dodgers from abandoning the city. Paul Rudolph’s Graphic Arts Center, a residential development for members of the lithographers union, would have been a boon to the TriBeCa waterfront; but Rudolph’s plan — for prefab units to be built outside the city by nonunion workers — fell flat. Moshe Safdie, likewise, failed to import his Habitat housing concept from Montreal to New York, and Steven Holl’s plan for building on the elevated railroad tracks of the Lower West Side was treated as pie in the sky. (It predated the High Line by decades.) Bertrand Goldberg’s daisy-shaped tower for ABC News, similar to his Marina City buildings in Chicago, would have delighted architecture lovers. The same is true of Harrison & Abramovitz partner Wallace K. Harrison’s first scheme for the Metropolitan Opera House, which explored the structural possibilities of thin-form concrete and was far superior to what eventually got built at Lincoln Center. Wright, a master of hits and misses, designed a trio of tree-like apartment towers for the East Village — their floor plates extending like branches from concrete “trunks” — that could have become instant landmarks.

In the recent starchitect era, plans by the likes of Diller Scofidio + Renfro, for a residential development on Staten Island; Zaha Hadid, for a sinewy Park Avenue tower; and Jean Nouvel, for a library in Brooklyn, had the potential to be wonderful additions to the city.

As the authors note, “Ghosts haunt many of the crossroads in New York.” It turns out, not all ghosts are scary.