The Hamptons to San Francisco: Shingle-Style Houses for the 21st Century 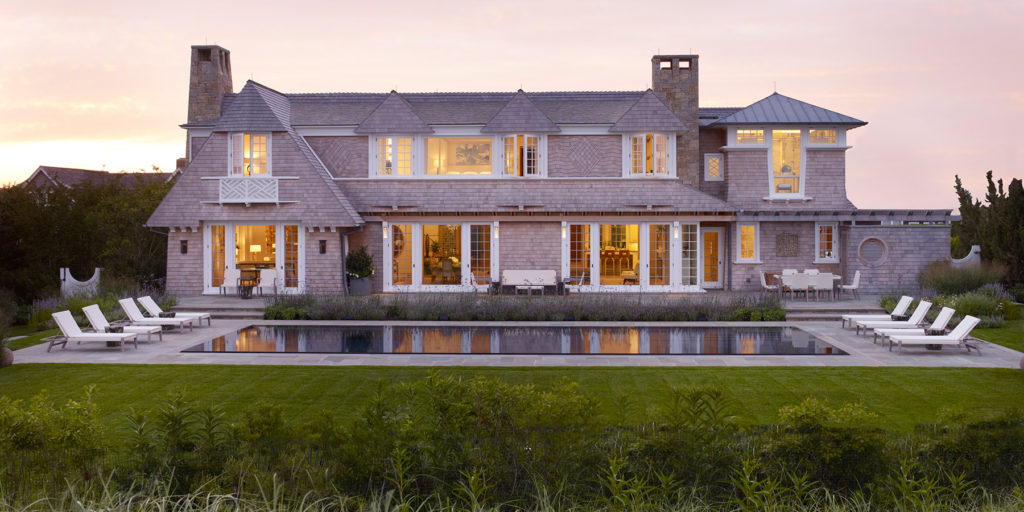 Like so many hallmarks of American aesthetics, the shingled residences of architecture firm Ike Kligerman Barkley are casual, individualistic and worthy of being passed on for generations. 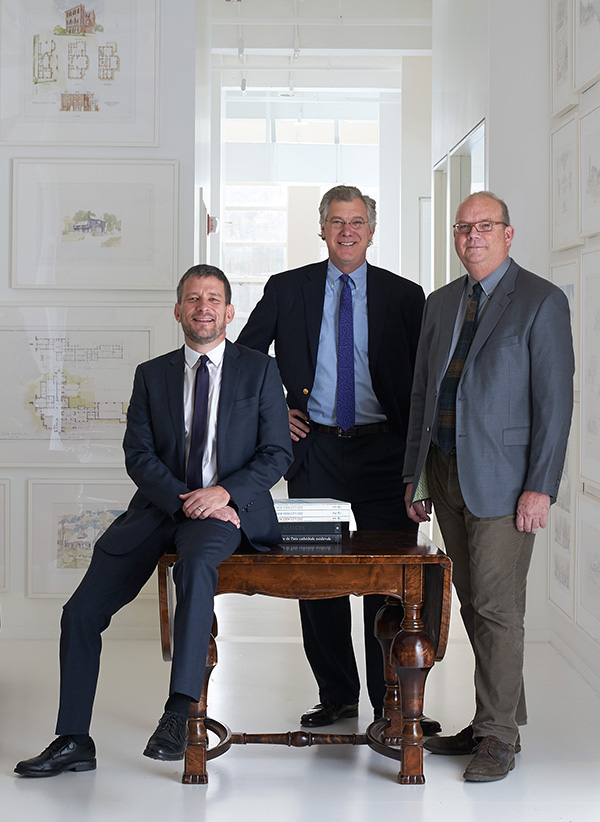 June 20, 2016In The New Shingled House, architects (from left) Joel Barkley, Thomas Kligerman and John Ike document 14 of their residential designs, from New England to the Carolinas to the California coast. Top: An oceanfront estate by Kligerman in the hamlet of Sagaponack, on the East End of New York’s Long Island. All photos by William Waldron, courtesy of Monacelli Press

There might have been hours of discussion about whether to include a mid-century home in San Diego belonging to architect John Ike in his firm’s latest book, The New Shingled House (Monacelli). The house isn’t new (it was built in 1945), and it isn’t shingled (almost as an afterthought, shingles appear on an interior wall). And it was hardly the kind of perfectly constructed building that clients of New York– and San Francisco–based Ike Kligerman Barkley have come to expect. When Ike began tearing up the house to renovate it, he notes, “There wasn’t a square wall or true floor to be found.”

But “in its method of composition and singularity of result, my house is unquestionably shingle in spirit,” he writes in the book, which presents the shingle less as a material than as a state of mind. As the architects (with writer Marc Kristal) assert in the introduction, “the shingle style captures particularly American values: freedom and informality; individualism, and a certain energetic restlessness; even a tolerance for different ways of being, an architectural multiculturalism.”

That’s quite a claim. But the 14 houses in the book bear it out. Most of them are large. (The book includes floor plans, each with a scale in feet — a welcome touch that helps readers decode the structures’ beautiful proportions.) Yet none is overbearing or bombastic. And that is due, in part, to shingles. Shingles are anti-monolithic; applied one by one, they result in mottled surfaces. Think of them as architectural tweed — nubby, a bit irregular and never flashy.

And the architects — longtime partners Ike, Thomas Kligerman and Joel Barkley — have found numerous ways to employ shingles. Sometimes, the wooden wedges are used almost like tiles, to cover flat surfaces. Other times, steam-bent, they form sensuous curves, surrounding columns on the facade of a Sagaponack, New York, house designed by Kligerman or lining a huge eyebrow at what Ike calls his “shinglish” country house. Ike’s portmanteau (“shinglish” has now entered the design-world lexicon) is a bit more successful than his combining of two disparate forms in the construction of that home: the lower floor’s heavy buttresses, clad in clinker bricks, and the upper floor’s thin appliqué of shingles, as light as butterfly wings. 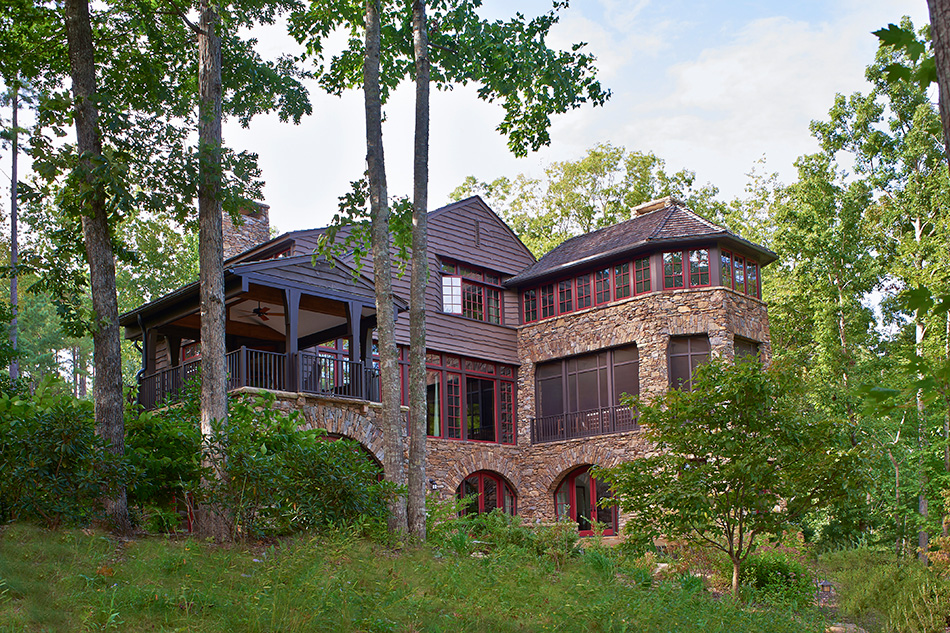 Kligerman took architect John Russell Pope’s 1920 shingled beach cottage, Tenacre, as his inspiration when designing this South Carolina lake house. It’s facade is a mix of natural-edge wood planks, known locally as wavy board, and what architects call “rubble.” The roof is shingled. 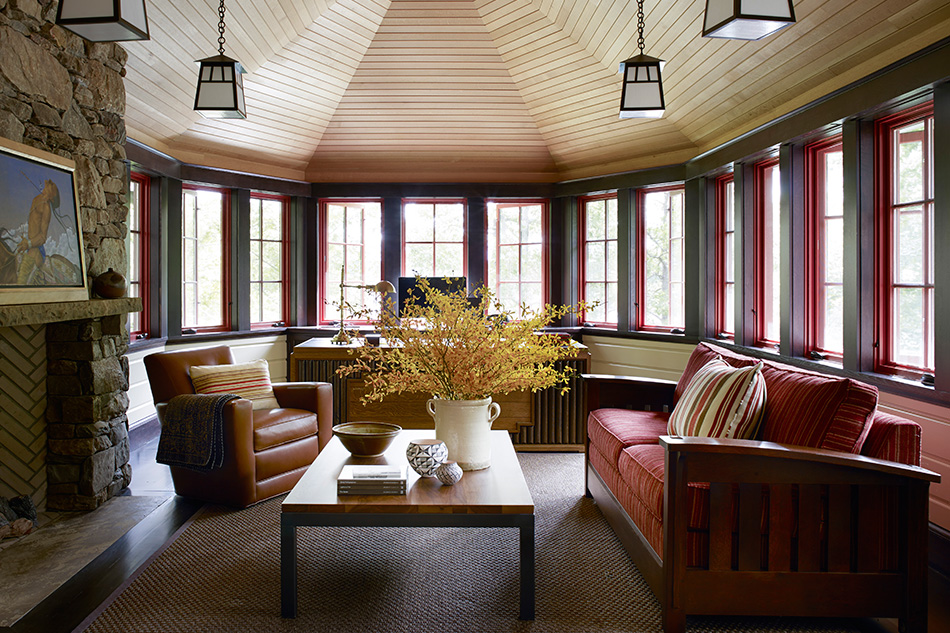 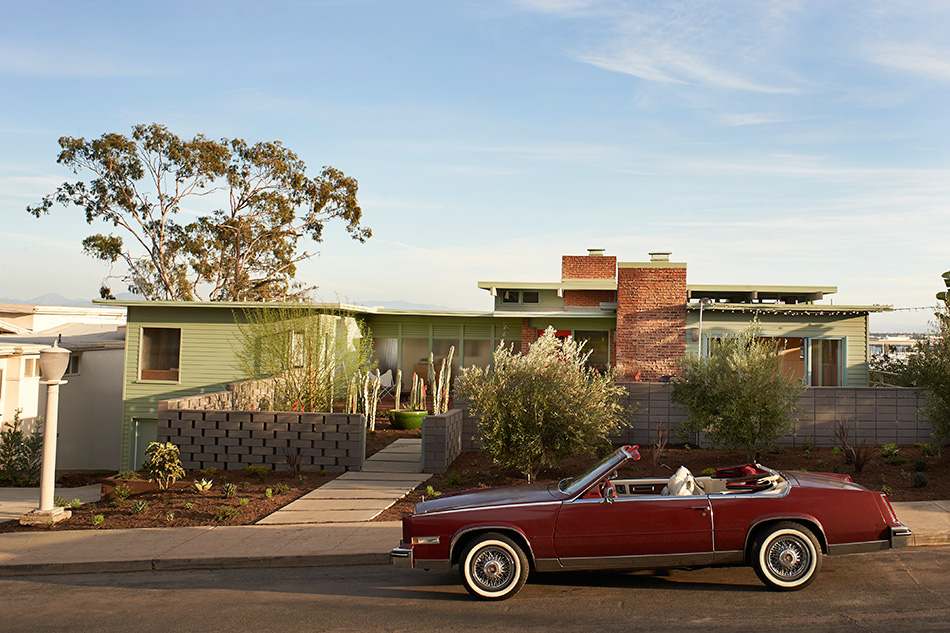 Ike’s mid-century San Diego home is a surprising inclusion in the book. No shingles are used on the outside of the mid-century modern home, but they do play a significant role in the informal interiors . 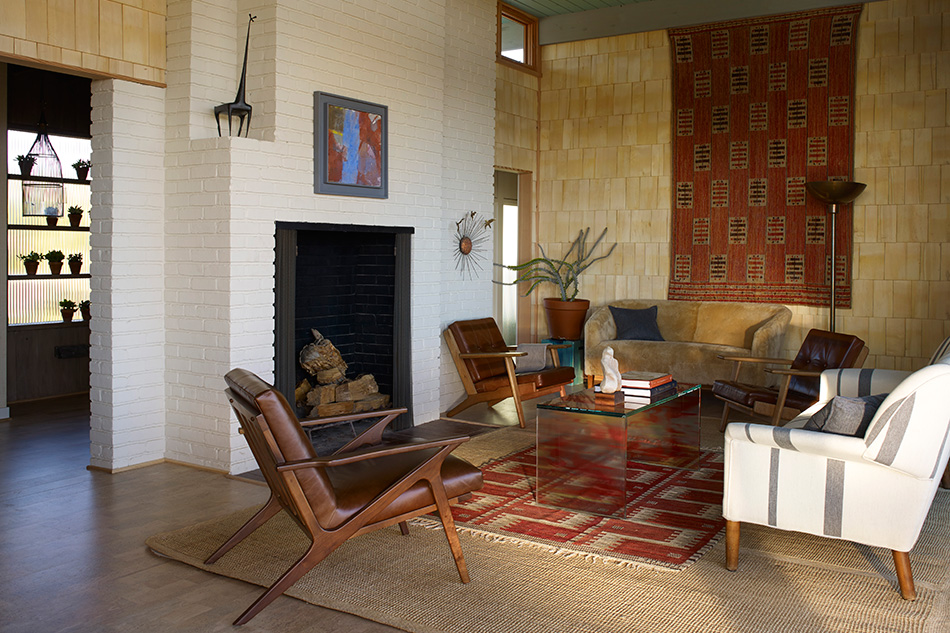 Ike finished the walls in Alaskan yellow cedar shingles to enhance the relationship between indoors and out, and added mid-century Scandinavian furnishings and textiles to create a casual, eclectic feeling in the spirit of shingle homes. 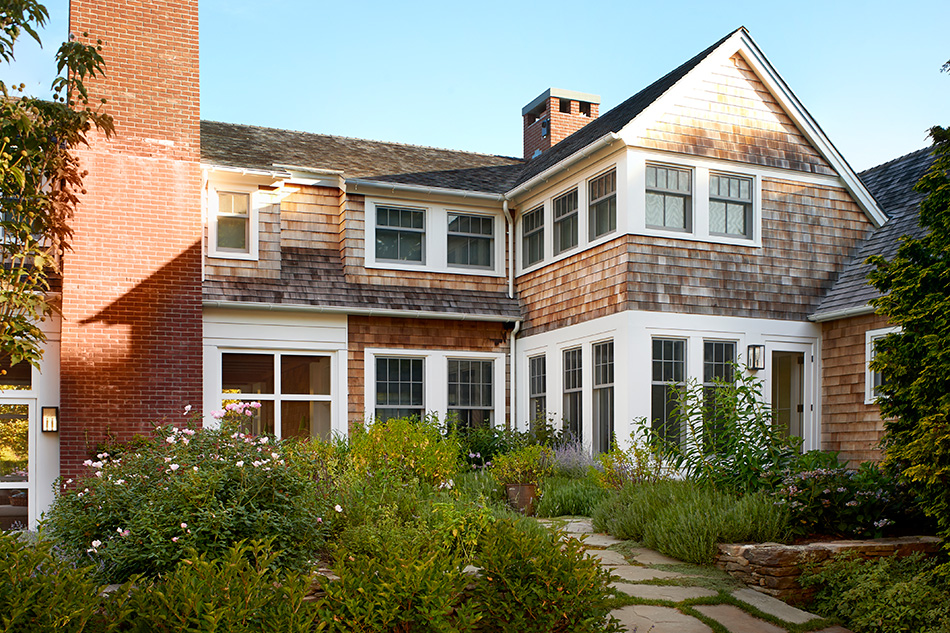 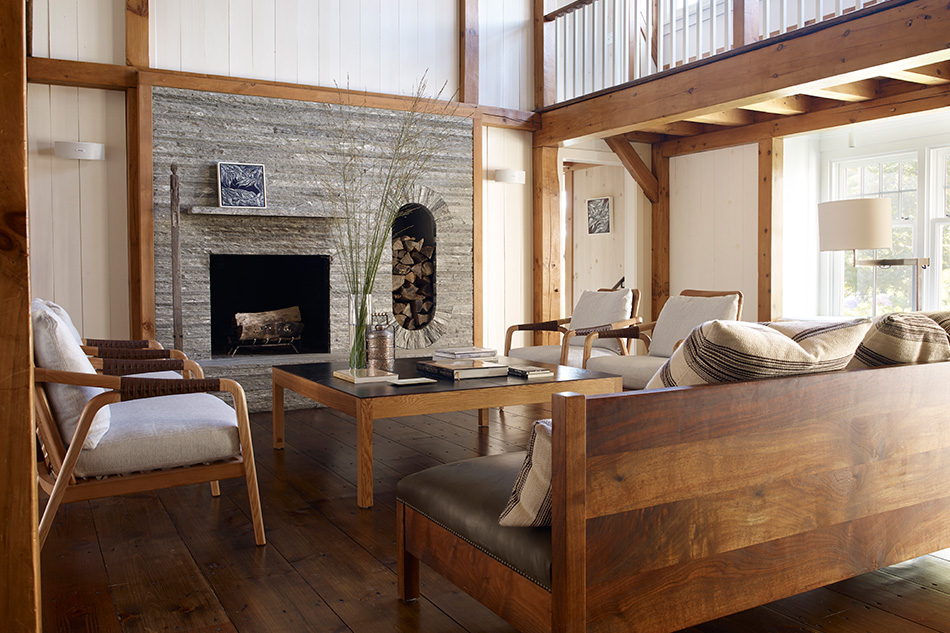 In the same house, the family room’s simple wood surfaces are complemented by a custom fireplace sheathed in slabs of Swiss stone. 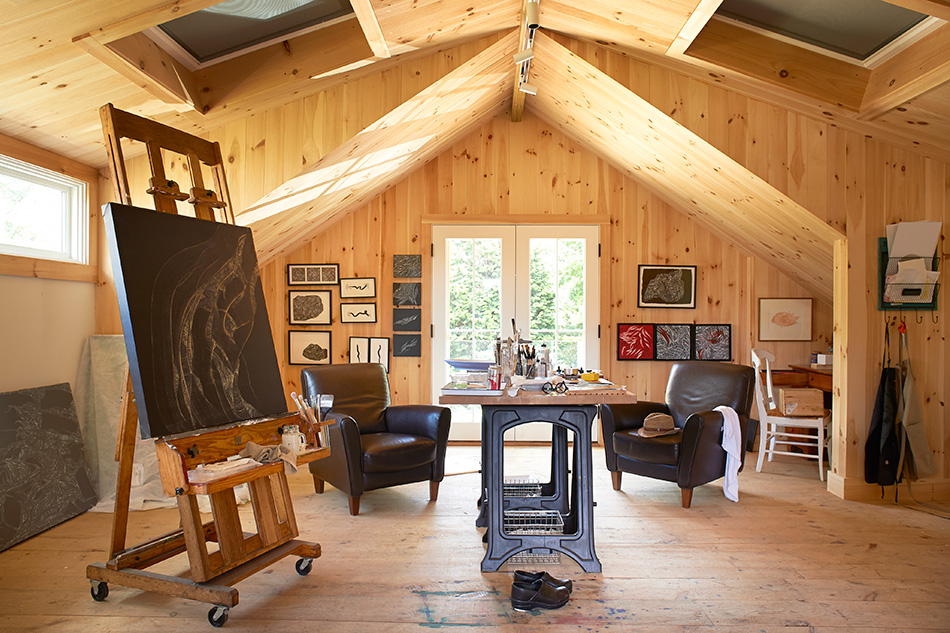 Ike transformed an outbuilding on the East End property into a painting studio, lining the space in pine boards and adding a deck that looks out to the gardens. 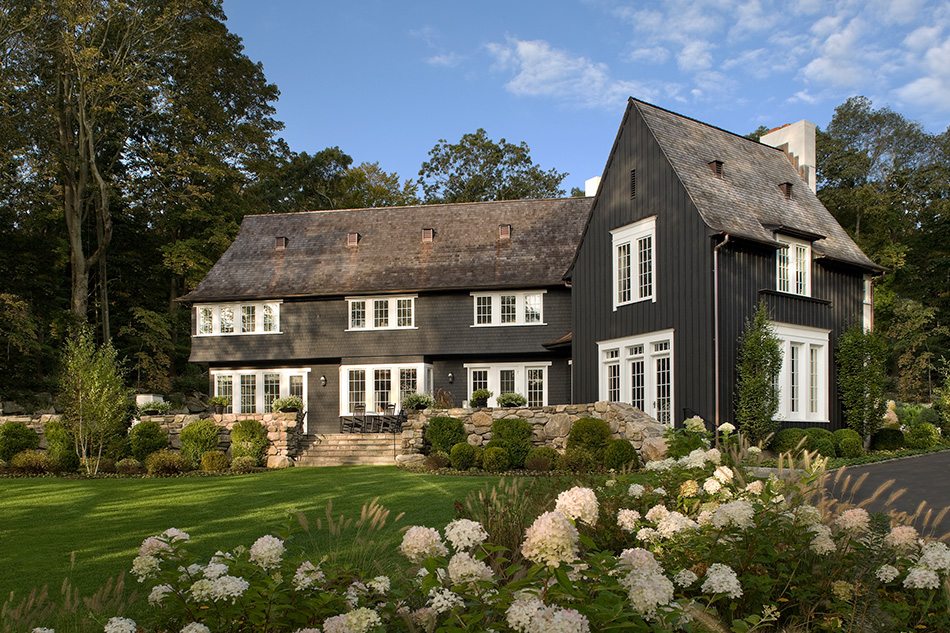 For a family home in Connecticut, Barkley was inspired by both English and Scandinavian architectural styles, which led him to combine volumes clad in horizontal rows of shingles with a board-and-batten wing that creates a strong vertical element. 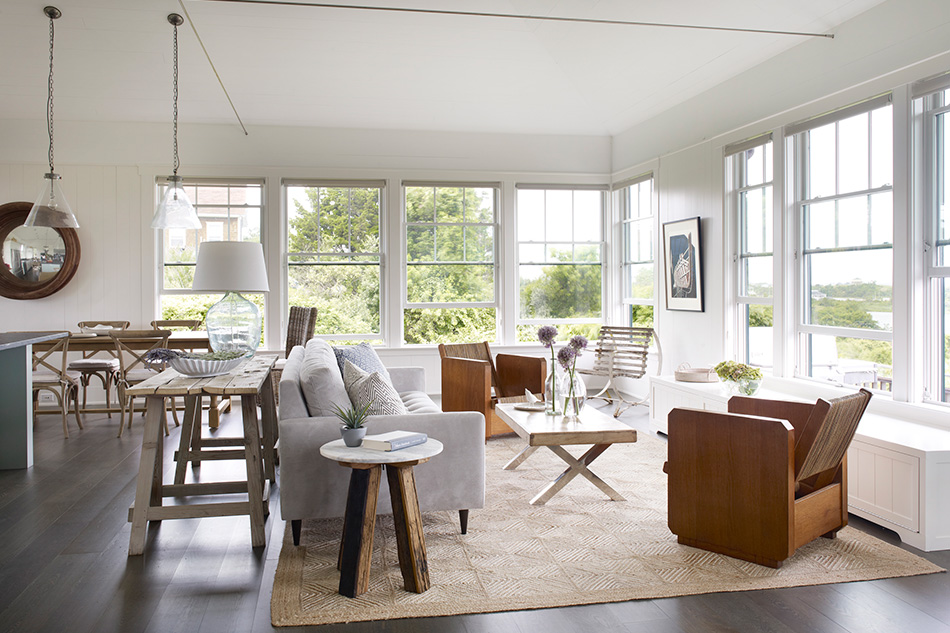 The top-floor great room of a Block Island, Rhode Island, retreat designed by Barkley offers views across protected wetlands to the harbor. 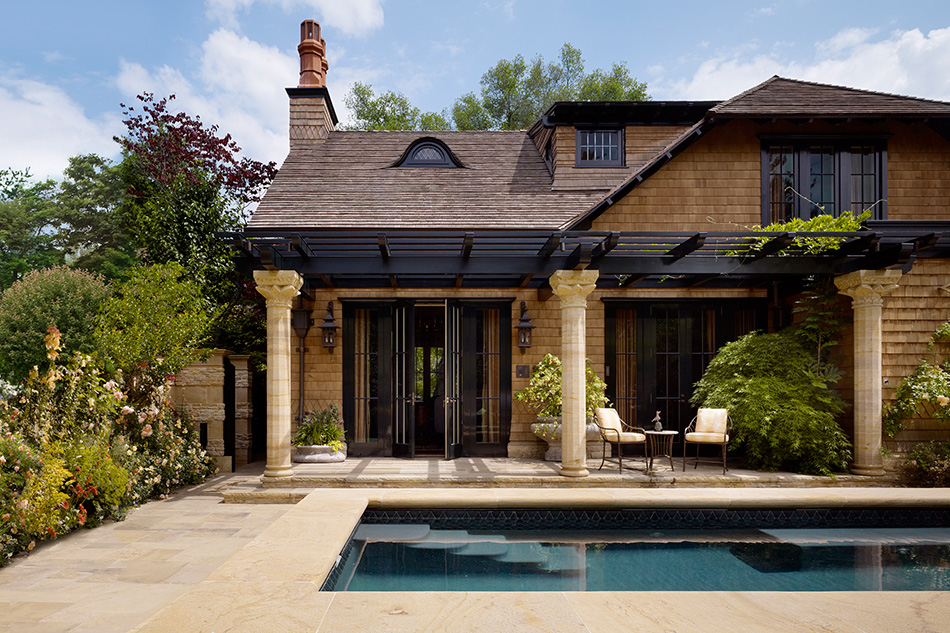 At the behest of the owners of a San Francisco Bay Area guest cottage, Barkley incorporated elements of both English Cotswolds–style architecture and the shingle-meets-craftsman aesthetic of California architect Bernard Maybeck. 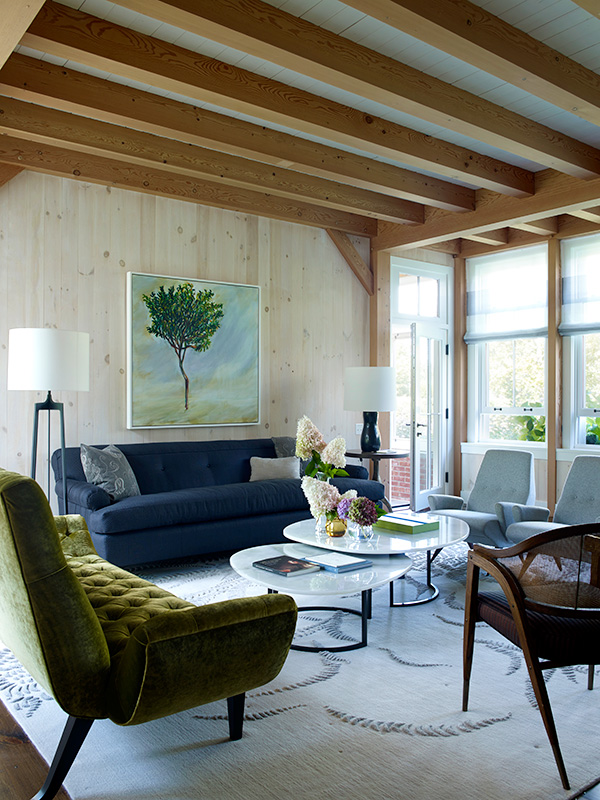 The living room of Ike’s East End project is a new addition, visually connected to the original structure through its use of post-and-beam construction.

A more pleasing combination is exemplified by a family compound on Long Island’s East End, designed by Ike, where shingled wings — house wings, not butterfly wings — sit on an 18-inch rough fieldstone podium: a classic architectural mating. Another lovely mix is found at a South Carolina lake house, designed by Kligerman, who used shingles only on the roof (the walls combine “wavy board” natural-edge wood planks and stone “rubble”). That house, Kligerman writes, was inspired by Tenacre, a 1920 Southampton beach cottage by John Russell Pope. (The book — and the houses — make frequent references to important shingle-style precedents.)

One of the great surprises in the book is the range of interior styles it reveals to be compatible with shingles. Some of those interiors were created in-house at Ike Kligerman Barkley, while others are the work of outside designers. A 1906 Arts and Crafts retreat that Ike restored in Upstate New York is suitably wainscoted inside, while Kligerman’s Southampton beach cottage is outfitted with sliding panels of blonde wood, giving it an almost Japanese mien.

The book’s great value is in showing, and occasionally telling, how thoughtful architects do their jobs. In a description of a Block Island, Rhode Island, split-level, Barkley explains that the boundary of a protected wetland required him to slice a porch on an oblique angle, generating a shape that he then repeated throughout the modest house: It goes on to appear in windows, door frames, even columns, always tapered at the prescribed slope. Frank Lloyd Wright,  a master at employing one geometric motif at a variety of scales — and also an expert user of shingles — would have approved.