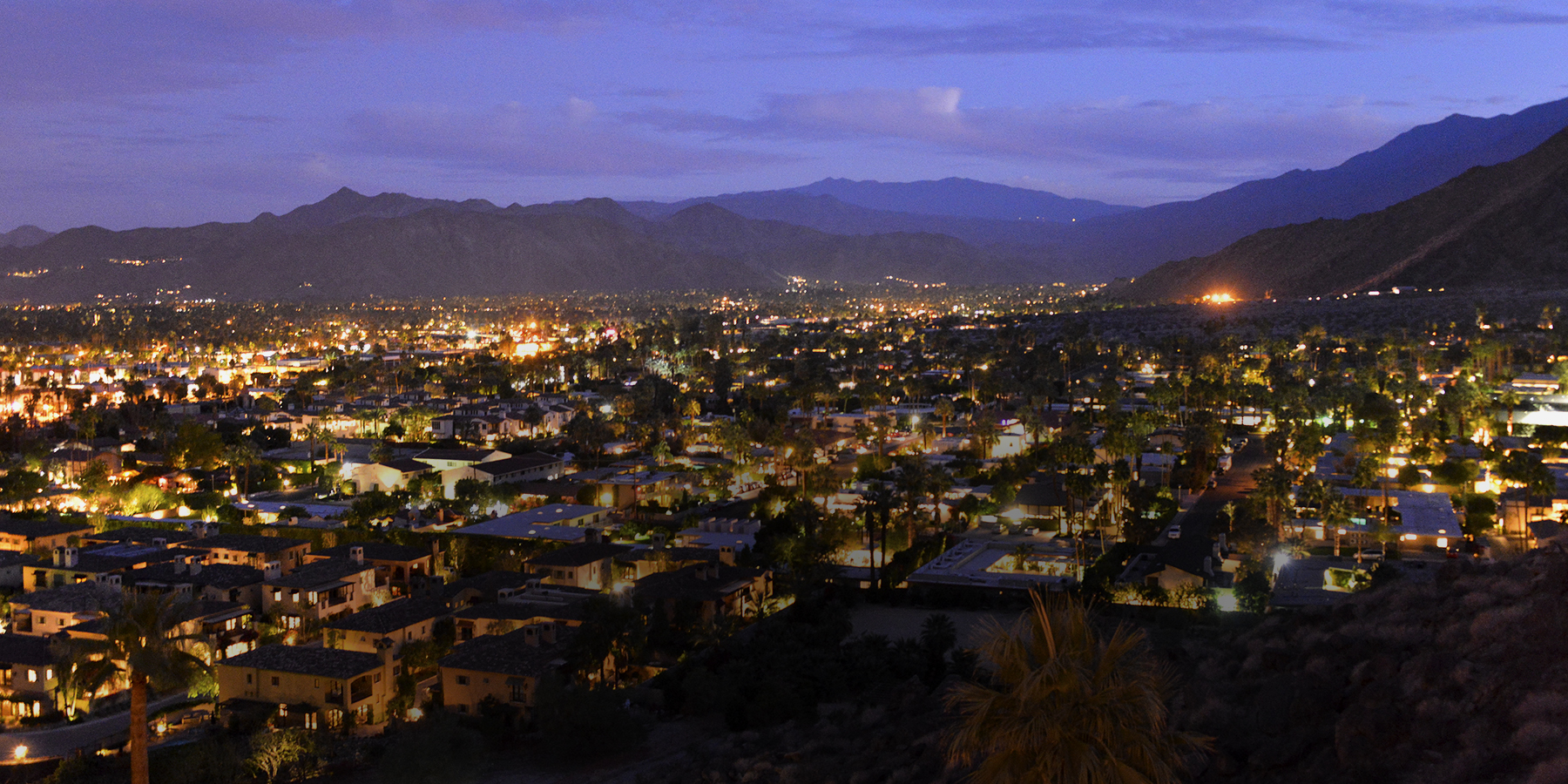 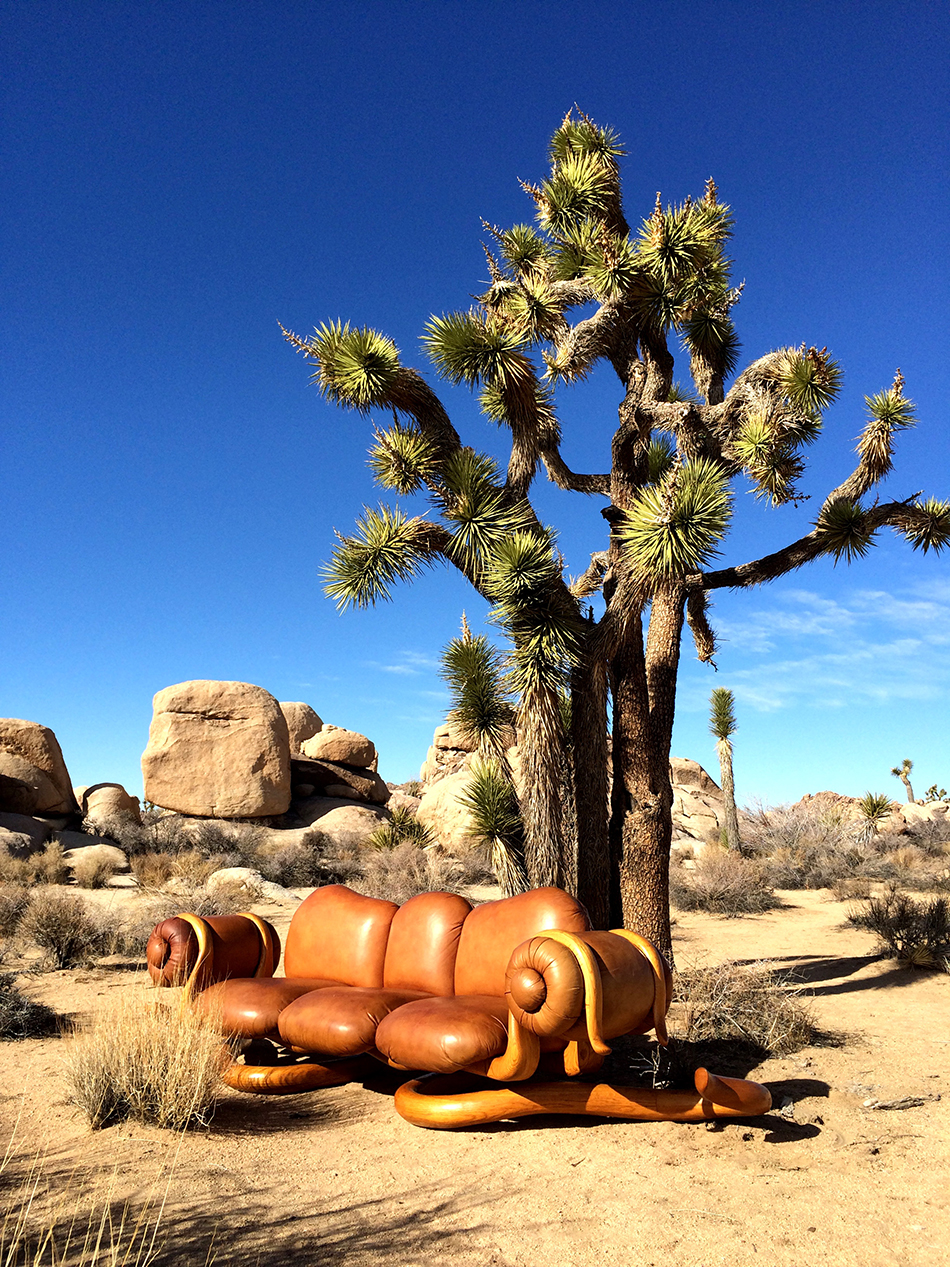 February 9, 2015Thousands of design enthusiasts will soon flock to Palm Springs, California — seen at night at top (photo by David A. Lee) — for Modernism Week (February 12 to 22), which encompasses parties, house tours, panels and the Modernism Show & Sale, featuring some 85 dealers, including the city’s own A La MOD, which is bringing a 1970s couch by Peter Danko.

I adore Palm Springs. It’s so gorgeous and strange and luscious, like going to another planet,” author and fashion designer Todd Oldham declares. “And it’s such an incredible microcosm of mid-century modernism — a design Disneyland.” Indeed, during Palm Springs’ Modernism Week — an 11-day event running from February 12 to 22, during which Oldham will deliver a keynote presentation on the famed industrial and textile designer Alexander Girard — Southern California’s most celebrated desert resort becomes an international mecca for architecture tourism and Rat Pack–style celebration.

Now in its tenth year and co-sponsored by 1stdibs, Modernism Week grew out of the 15-year-old Palm Springs Modernism Show & Sale, a weekend event whose exhibitors from across the country specialize in 20th-century art, furniture and accessories, drawing some 7,500 visitors. “We were seeing all these people come to town and thought why not give them more exposure to what Palm Springs is all about,” says Chris Mobley, chairman of the board of Modernism Week. “The Modernism Show focuses on design and home decor, while Modernism Week educates people about the architecture and culture of Palm Springs.”

Modernism Week first began with sightseeing tours of iconic Palm Springs architecture: houses by Richard Neutra and Albert Frey, William Cody’s stone-studded modernist buildings, Donald Wexler’s steel houses and William Krisel’s classic butterfly-roofed vacation homes in subdivisions built by the Alexander Construction Company. It has since blossomed into a multifaceted festival that last year drew over 45,000 design-lovers from more than 20 countries. The event attracts nostalgic baby boomers who grew up with Atomic Age design as well as a younger generation that frequents the area for the annual Coachella music festival. “Palm Springs has the largest collection of mid-century architecture per capita in the nation,” says Mobley. “For our tenth anniversary we have doubled the number of signature home tours and double-decker bus tours. Now you can see more than one-hundred-and-forty homes in some two dozen neighborhoods in a week.” 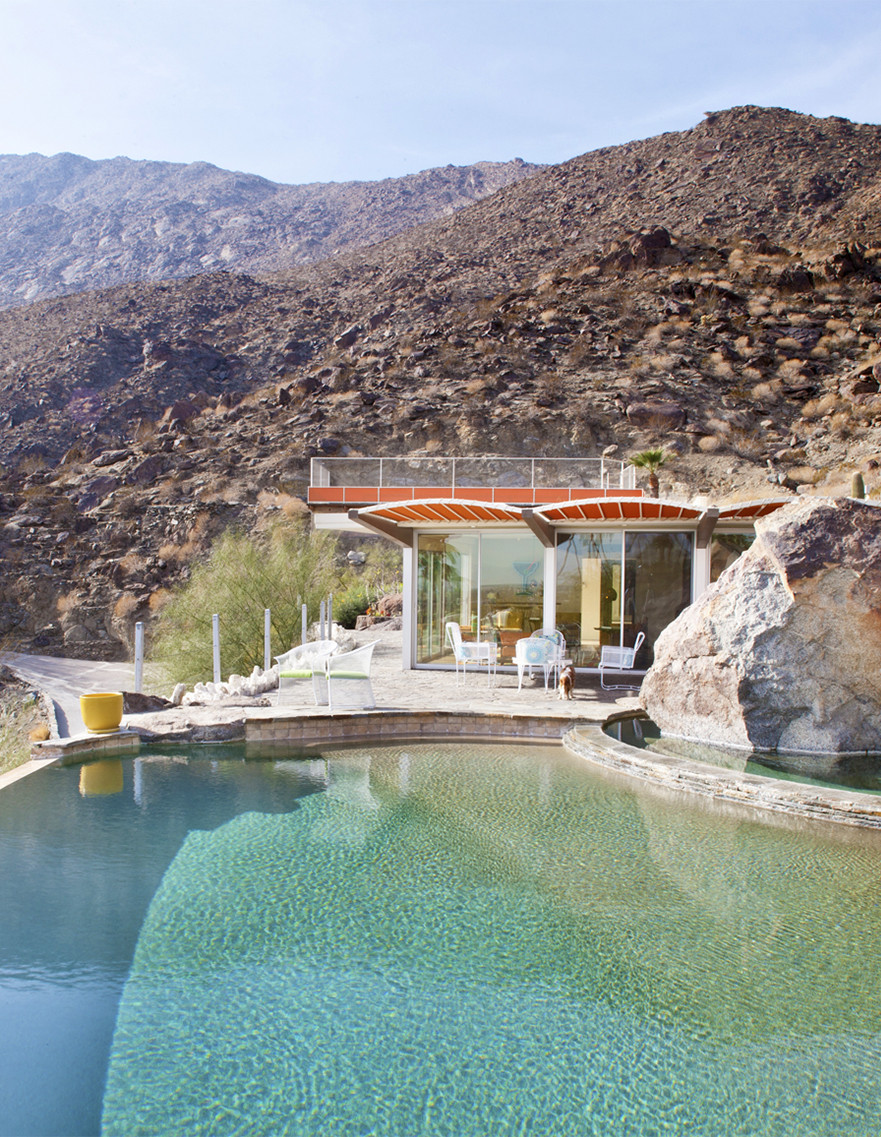 The Siva House, designed in 1959, was the location of an event celebrating the house’s architect Hugh Kaptur during Modernism Week 2014. Photo by Daniel Chavkin.

The programming has also diversified to include an array of parties, exhibitions and lectures throughout Palm Springs, including events at the recently restored Palm Springs Architecture and Design Center and a newly added social hub, CAMP, located in the Uptown Design District, which will feature films, food, drinks, DJ music and a retail tent throughout Modernism Week. Highlights include tours of the four-unit Hotel Lautner in Desert Hot Springs, a 1947 geometric design by John Lautner with windows overlooking private gardens; and Frank Sinatra’s swank Twin Palms estate, which still retains Old Blue Eyes’ hi-fi and recording equipment. There are also vintage car and trailer shows, and presentations on the history of modernism in the seemingly disparate locales of Australia, Michigan and Fire Island, New York, as well as on such mid-century designers as George Nelson and Jack Lenor Larsen. (And on February 14, this reporter will emcee a panel discussion about the life and work of Los Angeles mid-century designers Jerome and Evelyn Ackerman.)

Additionally, there is the Christopher Kennedy Compound, a decorator show house organized by Palm Springs designer Christopher Kennedy. “The theme this year is Jet Set American Style,” says Kennedy, who is known for an aesthetic that blends mid-century modernism and Hollywood glamour, a look he’s used to great effect on his redesigns of Palm Springs hideaways once owned by Liberace and Dragnet’s Jack Webb. “And the goal is to re-establish Palm Springs as an incubator of world-class design by restoring a 1964 property with the help of eleven top design talents deploying the latest technology.” Among them is Palm Springs weekend resident Michael Berman, who will design the pool deck as a swank setting with “deep lounge seating for perching with a smooth cocktail while listening to Mel Torme,” says Berman. The Los Angeles-based Berman is opening the doors to his own residence, too, for a Celebrity Designers Home Tour, that will also include the homes of Martyn Lawrence Bullard and Paul Lavoie. “I’ll get complete strangers who happen to be interested in design walking through my home, which I consider my laboratory,” Berman enthuses. “That will provide great feedback.”

“Palm Springs is so gorgeous and strange and luscious,” says Todd Oldham. “And it’s an incredible microcosm of mid-century modernism — a design Disneyland.”

Now in its 15th year, the Palm Springs Modernism Show & Sale (PSMOD) is known for cementing new trends and bringing underexposed, sometimes unexpected design to the forefront. This year, 24 1stdibs dealers among the show’s anticipated 86 participants will be showcasing a wide range of looks, from rustic to refined, sculptural to streamlined.

“We buy one-of-a-kind third-quarter-of-the-twentieth-century American and European pieces from many artists’ homes,” says Ed Koren of Bridges Over Time, a Newburgh, New York, dealer that will be showing 1960s Asian-style Widdicomb chairs along with a 1970s chalcedony glass sculpture by Loredano Rosin.

The Dallas-based 20c Design will present a 16-foot wide triptych by contemporary artist Paul Manes, depicting a propeller airplane in a night sky, in a booth that will also feature an early Hand chair by Pedro Friedeberg in natural mahogany, a Renzo Rutili credenza and a welded-steel Dandelion sculpture, circa 1965, by New Mexico artist Roger Schultz. Southwestern styles are on the rise. “Navajo rugs and textiles are folksy yet have streamlined patterns and color palettes that are simple yet very rich, and ours are in pristine condition,” says Lewis Keister of East Meets West Antiques, in Los Angeles, who will also bring rustic Old Hickory furniture to the show. “Many designers are mixing Navajo and Old Hickory with mid-century modern. It tones it all down.” 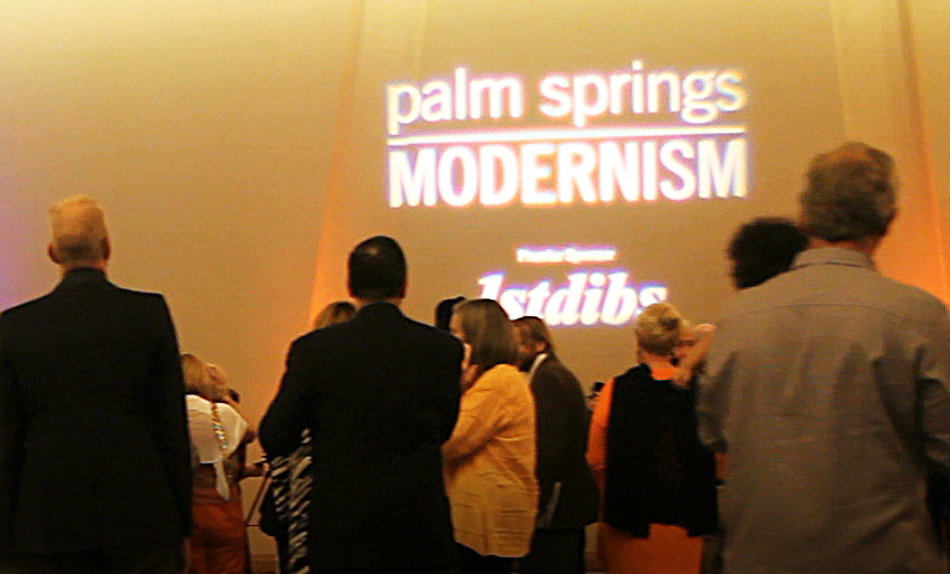 While many Palm Springs residents and visitors gravitate to the sleek lines of American mid-century modernism — à la Herman Miller and Knoll — some exhibitors prefer to push the envelope. “Any piece we offer needs to have a ‘wow’ or ‘sick’ factor, collectibility and an interesting history,” says Dawn Maier, of House of Blu, in San Diego, who is bringing a pair of 1988 Fauteuil Crust chairs by Ron Arad. “These ultra-rare chairs take an artistic approach to what looks like a cross between an Art Deco club chair and the architecture of Frank Gehry.”

Los Angeles’s Reform Gallery, meanwhile, which specializes in Californian design, will show whimsical illustrated works in many media by Jerome and Evelyn Ackerman; a 1950s desk by Dorothy Schindele, a modernist known for her mixture of iron and wood; and early pottery by Peter Voulkos. Jeff Schuerholz, of Fat Chance, also in Los Angeles, will feature a rare signed Philip and Kelvin LaVerne four-door bronze cabinet, alongside a 1969 welded-steel dining table by Paul Evans and a copper and fused-Venetian-glass Claire Falkenstein sculpture. “I am showing quite a bit of constructed, hammered, patinated, formed, plated, decorated and welded steel,” Schuerholz says. “Some of the pieces are rugged and raw, even powerful, and will be shown along with other pieces that are minimal and clean.”

Chris Mizeski, an owner of the gallery Christopher Anthony, Ltd., which has a retail location in the heart of Palm Springs, views the Modernism Show as a platform for exposing new talent. “We have been showcasing contemporary ceramicists for about two years, including Jeremy Briddell and Heather Rosenman and Titia Estes,” Mizeski says. At the show, Mizeski and his gallery co-owner, Tim Prendergrast, will present a diverse range of vintage home decor including a 1950s Swedish chest by Edmund Spence, 1980s designs by Karl Springer and a recent gilded-metal wall sculpture by the California artist Del Williams. “As opposed to straight mid-century modern furniture, which we keep in stock,” Mizeski says, “we are bringing items that fall into the category of glamorous, pretty, sexy and chic.”

That’s just what Todd Oldham, who will be attending Modernism Week for the first time, hopes to see. “I’ve been collecting mid-century modern design since the 1980s,” he says. “And what I love about the movement is the idea that designers were here to make your life better, to create something that is useful, beautiful and fantastic.”