From a Historic Sicilian Hotel to a 1960s Yacht, This London Duo Crafts Inimitable Interiors 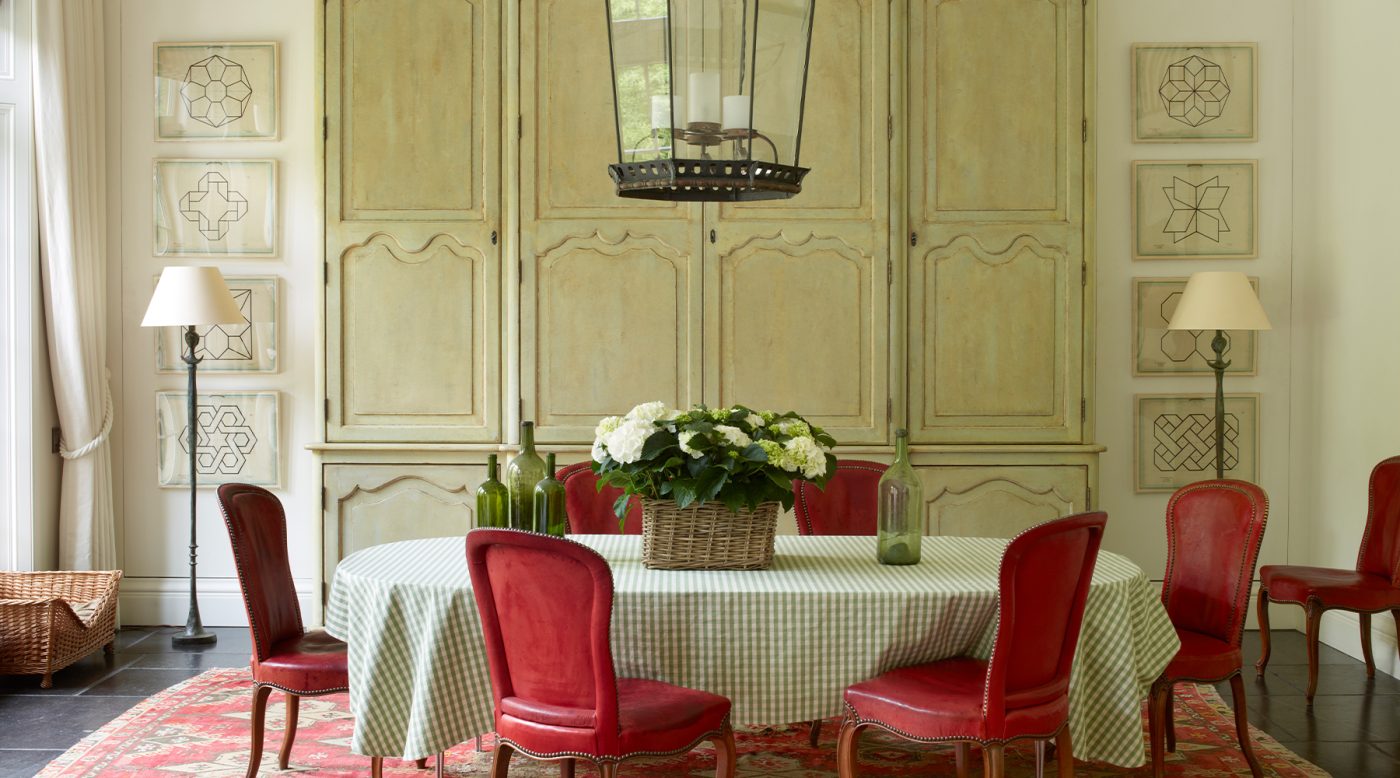 The practice headed by Paolo Moschino and Philip Vergeylen may have recently changed its name, but the partners' commitment to fine design remains all-consuming.

February 6, 2022Back in 2004, it was Philip Vergeylen’s sister’s birthday, and he and Paolo Moschino, his partner in business and life, were in seventh heaven. The reason for their elation was the venue chosen for the family celebrations: the Hotel Villa Igiea, a vast edifice on the Bay of Palermo that had once belonged to the Florios, Sicily’s richest family. The Florios had bought an existing villa on the site in 1899, enlarged it and transformed it into a luxury hotel with the help of architect Ernesto Basile. In its heyday pre–World War I, it was the pride of Palermo, if not of all Sicily. Many crowned heads of Europe — King Edward VII and the czarina of Russia among them — enjoyed winter vacations there. By the time of the birthday festivities, however, the hotel was down-at-the-heels, its grandeur long since faded. Nevertheless, Vergeylen recalls, “Paolo and I were excited, walking around imagining what we would do with this space and with that room. We had a fascinating time.” The pair returned to London and thought no more about it.

Officially, Vergeylen heads up the interior-design arm of their firm — formerly known as Paolo Moschino for Nicholas Haslam but renamed Paolo Moschino last month — while Moschino manages its decorating shops, just off London’s Pimlico Road. In practice, though, there is a great deal of crossover — “We discuss every project together, endlessly,” says Vergeylen. The designers have acquired prominent tastemaker admirers, including Olga Polizzi, the head of design for Rocco Forte Hotels. And several years after the Sicilian birthday bash, Polizzi telephoned to say her hospitality group had bought the Hotel Villa Igiea and ask if they would do the interior design. ‘‘We’ve already designed it — in our heads!’’ Vergeylen replied triumphantly.

Although the firm had overseen projects from Paris to Portofino, the Villa Igiea was their first large hospitality commission. Begun in 2018 and completed in April of last year, it turned out to be an object lesson in working within a historic context. “I was adamant we should keep the anima of the place,” says Vergeylen. The building’s famed Sala Basile, a riot of Art Nouveau murals and sinuous woodwork by the Florio family’s architect, could not be further from Vergeylen’s tailored, restrained taste. But both he and Moschino embraced it as a part of the building’s heritage and took hues from its flowery murals for the five color schemes in the hotel’s 100 rooms and suites.

The pair followed Polizzi’s policy of using local artisans to copy 18th-century Sicilian tiles and adopted Sicilian marble for the bathrooms. They also sourced pieces nearby to supplement the period furniture that had been stored in the hotel’s attics. While they wanted a feeling of lightness and freshness in the decoration, every room has at least one Edwardian antique to connect it to the past. “We were passionate that it should feel like a luxurious private house, beside the sea but not maritime,” says Vergeylen. Polizzi, who could not be happier with her choice of designers, says: ‘‘Philip and Paolo have done a wonderful job. Although the hotel has gone through a massive refurbishment, their design looks and feels as if it had always been there.’’

In the 1990s, Vergeylen was the global head of marketing for an international finance company. Born in Belgium, he lived all over the world but was settled in London with Moschino when the company asked him to relocate to New York. He had loved interior design since his youth, and when a colleague asked him to refurbish his Paris flat, Vergeylen promptly resigned, and a new career was launched.

Moschino was born in a small coastal town in Tuscany. ‘‘My teenage bedroom could have made the cover of The World of Interiors,” he recalls. “It had an eighteenth-century Italian commode, pale-gray seagrass wallpaper, white linen curtains, an antique brass headboard and a stained dark-wood floor — not a single poster but lots of English prints of animals on the walls.’’ He studied law at university  (“not too much,” he admits) and came to London at age 23 — “In the eighties, it was so exciting.” He got a job in an interiors shop and, by 1995, had acquired the Nicholas Haslam brand, named for its colorful, socially prominent founder, who has decorated homes for the likes of Mick Jagger, Rod Stewart and Charles Saatchi.

Moschino and Vergeylen agree that the most important aspect of creating interiors is to “get under the skin of the clients.” As Moschino puts it, ‘‘I need to know what they’re trying to achieve. Is it a trophy house to knock their visitors’ socks off, or is it a comfortable family home? One is not less fun than the other, but once you understand what’s needed, you’re there.’’ Adds Vergeylen, ‘‘For us, design isn’t a job, it’s our life.’’ Recent commissions include a sporting lodge in the Scottish Highlands, a 13,000-square-foot chalet in Courchevel and the refit of a 1968 Feadship yacht. The pair are currently working on a historically sensitive project in the colonial part of Santo Domingo, in the Dominican Republic; the conversion of a 19th-century palazzo in Milan; and a house on Mustique. This list points up the international following they have attracted with the quality of their craftsmanship, their mastery in mixing antiques with early 20th-century design, their clever use of color and the way their rooms look finished but not staged.

One client asked Vergeylen and Moschino to create a French château within the walls of her eight-bedroom Georgian house in Kensington. The pair bought at auction a sublime 18th-century French parquet de Versailles floor, which they installed in the reception rooms and library. (They later learned they had been bidding against the French state.) The designers turned the largest room in her house into a state-of-the-art kitchen, with paneling from Féau Boiseries on the walls, a chimneypiece in Breche marble and a handsome table surrounded by 18 antique red-leather chairs.

Others clients requested a great deal of “maritime” in their beach house in the South of France. They wanted it to look as simple as the local priest’s house from the exterior but be all relaxed, refined luxury within. Their main house is nearby, and this place, with its Picasso pottery, painting by Cocteau, straw worktables by Jean-Michel Frank and sculptures by Philippe Hiquily, was intended just for swimming and lunches beside the water. Lockdown changed all that, and the wife, obliged to isolate there, phoned the designers to congratulate them on a supremely comfortable house. “It was three years since it had been completed,” says Vergeylen, “but the first time she’d actually slept there.’’ 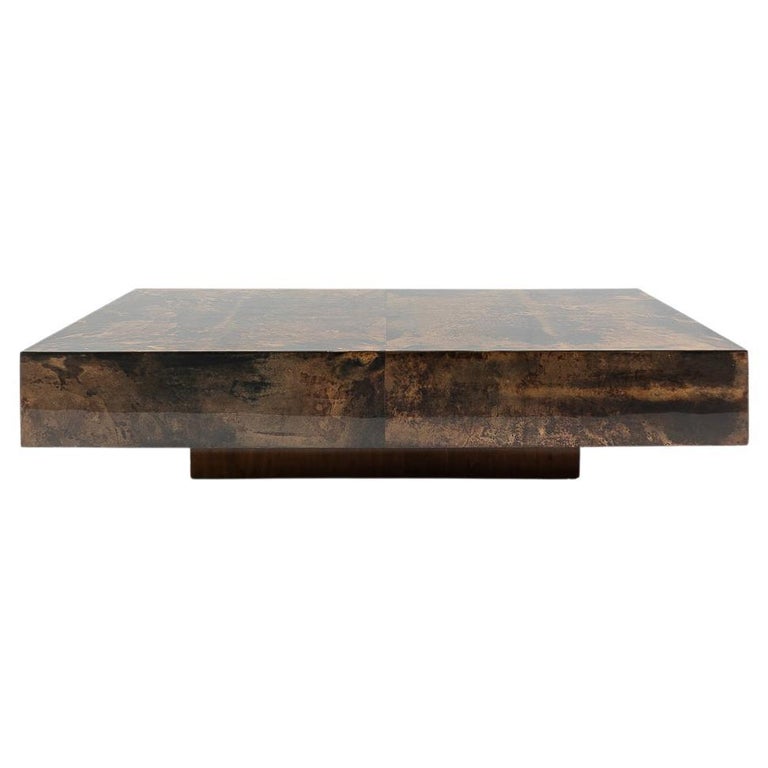 “Aldo Turo was the man for lacquered goatskin. It is a wonderful finish. We love the purity of his shapes. We’ve used this table in a very contemporary setting in New York.” 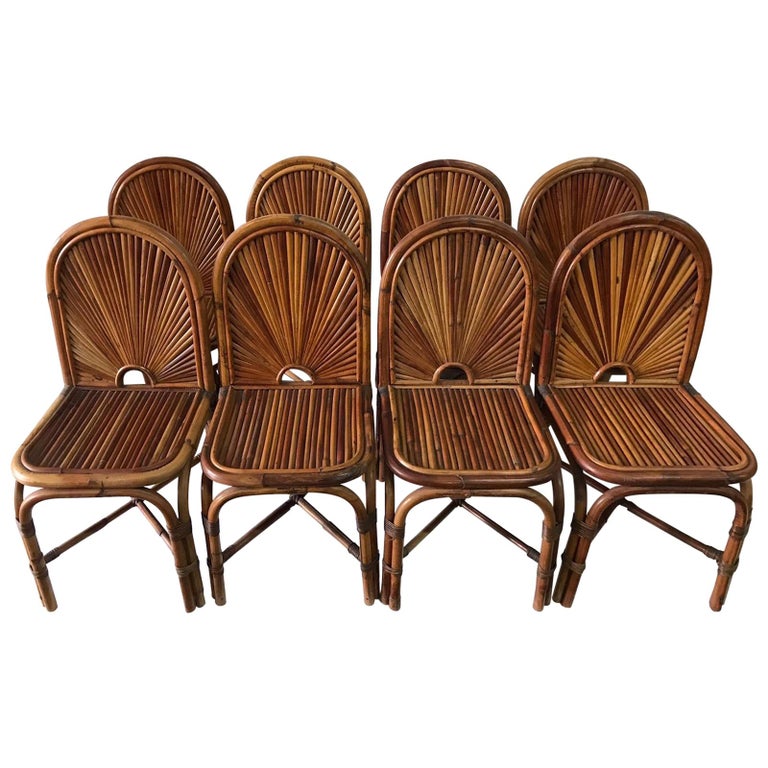 “Gabriella Crespi is a longtime idol of ours. She’s the queen of rattan, which she combined with brass in such an interesting way. We’re using her furniture for a hotel in Portofino that needs to have that nineteen-sixties air her work brings to a project.” 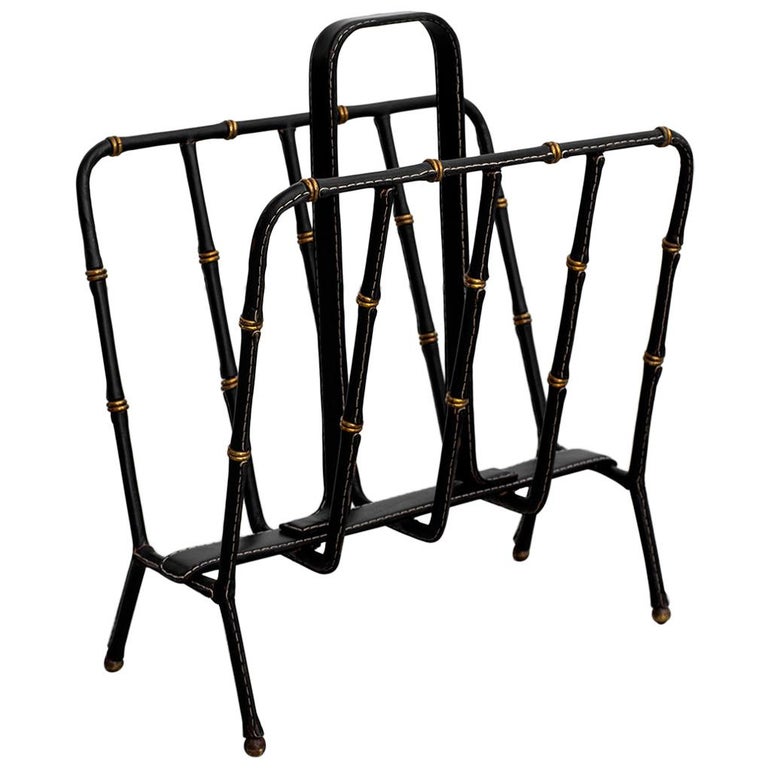 “We’ve always loved Jacques Adnet’s work. He invented the concept of leather bamboo, and this is just so chic!” 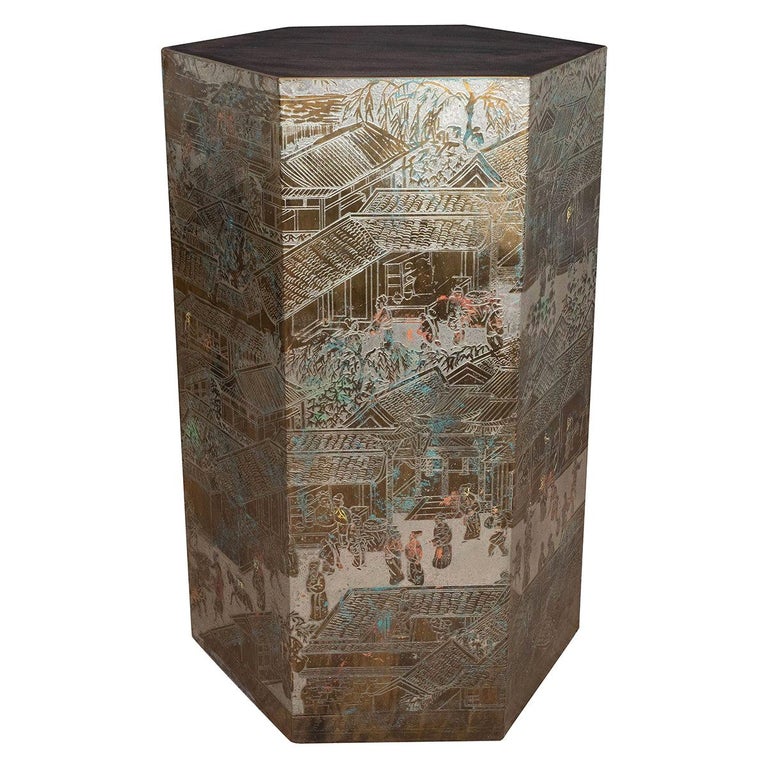 “Philip and Kelvin LaVerne are more than furniture makers, they are artists. We think they were the first to do chinoiserie etched in bronze, and it makes for a very masculine effect. This would be perfect for a current London project.” 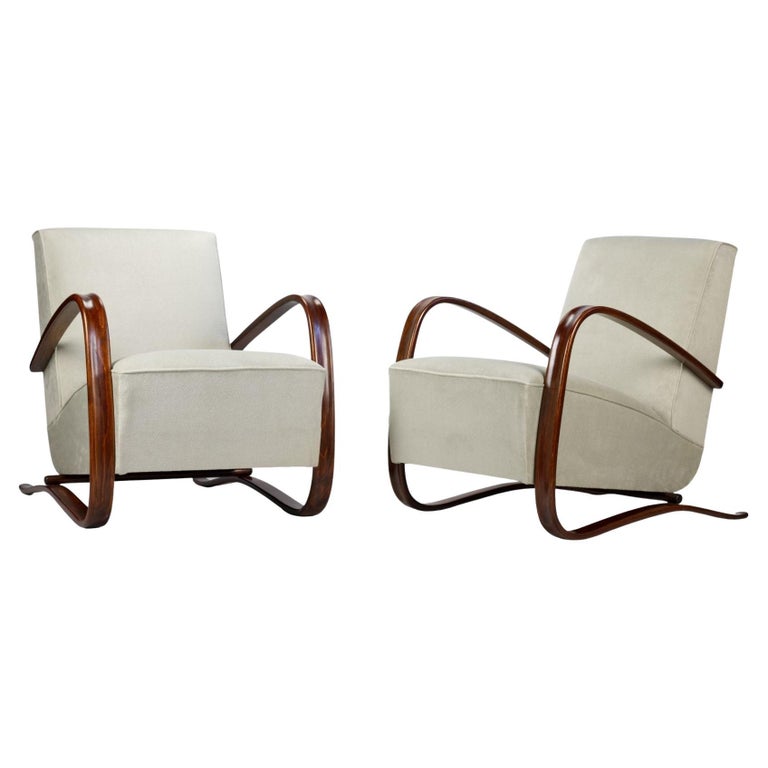 “Jindřich Halabala, who worked in Czechoslovakia, is a recent discovery for us, though we think his work is becoming more fashionable. We admire the sculptural simplicity of these chairs. What could be more satisfying than these elegant shapes?” 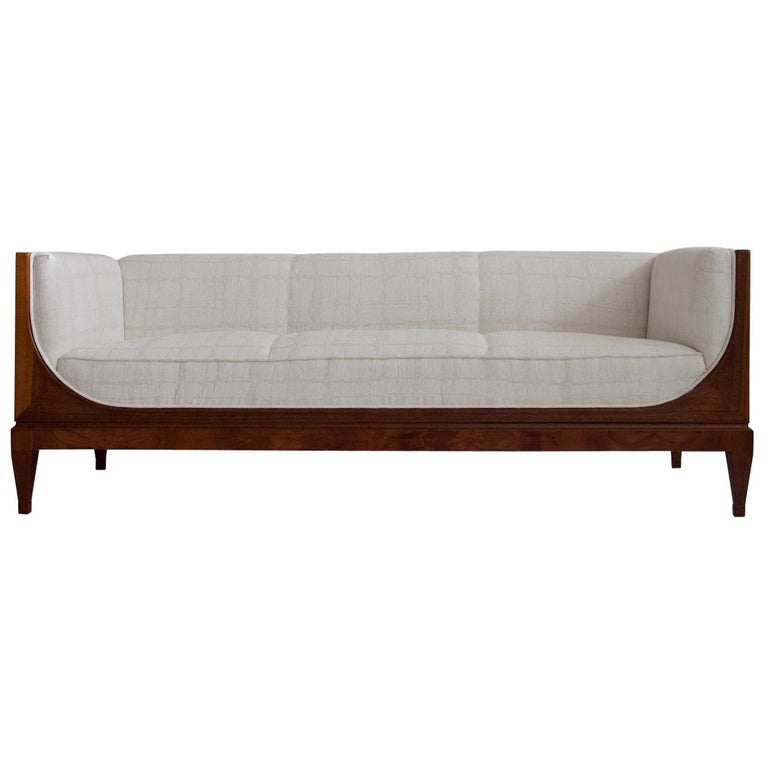 “This Henningsen sofa is one of our favorites. It’s a piece that can work in a classic or a contemporary interior — the shape is so pure.”