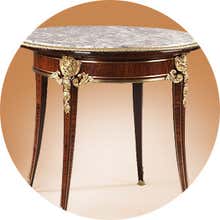 In Scotland, the architect Charles Rennie Mackintosh developed a singular, restrained look based on scale rather than ornament; a style best known from his narrow chairs with exceedingly tall backs, designed for Glasgow tea rooms. Meanwhile in France, Hector Guimard — whose iconic 1896 entry arches for the Paris Metro are still in use — and Louis Majorelle produced chairs, desks, bedframes and cabinets with sweeping lines and rich veneers. The Art Nouveau movement was known as Jugendstil ("Youth Style") in Germany, and in Austria the designers of the Vienna Secession group — notably Koloman Moser, Josef Hoffmann and Joseph Maria Olbrich — produced a relatively austere iteration of the Art Nouveau style, which mixed curving and geometric elements.

Art Nouveau revitalized all of the applied arts. Ceramists such as Ernest Chaplet and Edmond Lachenal created new forms covered in novel and rediscovered glazes that produced thick, foam-like finishes. Bold vases, bowls and lighting designs in acid-etched and marquetry cameo glass by Émile Gallé and the Daum Freres appeared in France, while in New York the studio of Louis Comfort Tiffany brought out buoyant pieces in opalescent favrile glass. Jewelry design was revolutionized, as settings, for the first time, were emphasized as much as, or more than, gemstones. A favorite Art Nouveau jewelry motif was insects (think of Tiffany, in his famed Dragonflies glass lampshade).

Art Nouveau Console Table from Austria with Bronze and Onyx, circa 1890
Located in Chicago, IL
Exquisite Viennese Art Nouveau oblong console table made from solid mahogany with bronze clover details and an exotic appearing onyx top, circa 1890. This is a one of a kind, very im...
Category

Art Nouveau Console Table from Austria with Bronze and Onyx, circa 1890

“ Rodin and the Chaste Suzanne” by Pierre Bonnard
By Pierre Bonnard
Located in Sheffield, MA
Bronze Height 7 1/4&quot; in. Width 11 in. Depth 3in. Circa 1905 Signed with monogram and numbered on the left side Bonnard was born in Fontenay-aux-Roses, Hauts-de-Sei...
Category

“ Rodin and the Chaste Suzanne” by Pierre Bonnard

Vase by Daum Nancy
By Daum
Located in Pompano Beach, FL
Etched and enameled glass vase, France, circa 1905. etched signature to side: Daum Nancy with the cross of Lorraine. Provenance: Private collection
Category

Vase by Daum Nancy
By Daum
Located in Pompano Beach, FL
Etched and enameled glass vase, France, circa 1905. Etched signature to side: Daum Nancy 3501 with the cross of Lorraine. Provenance: private collection.
Category

"Mother and Child" by Kai Nielsen for Bing & Grondahl
By Kai Nielsen
Located in Philadelphia, PA
Exquisitely crafted by Bing and Grondahl in 1913, this blanc de chine porcelain figure by Kai Nielsen explored his facination with female figures that seem to be mothers to both huma...
Category

"Mother and Child" by Kai Nielsen for Bing & Grondahl

Important Pair of Tiffany and Co. Figures by Peiffer