Ernest Chaplet was a French designer, sculptor and ceramist. He was a key figure in the French art pottery movement, and his works are held in international public collections such as the Musée d'Orsay, Paris.

Having worked in the industry for over 30 years, he opened an atelier with the sculptor Albert-Louis Dammouse in 1882, producing stoneware often influenced by Japanese designs and Chinese prototypes. From 1875, he worked with Félix Bracquemond. Chaplet became head of the Parisian workshops of Charles Haviland of Haviland & Co. in 1882, working in stoneware and porcelain for them. He worked on ceramics with Paul Gauguin from 1886, together they created some 55 stoneware pots with applied figures or ornamental fragments, multiple handles, painted and partially glazed. He later worked with Jules Dalou and Auguste Rodin.

From 1887, Chaplet took up permanent residence at Choisy-le-Roi, often collaborating with the manufacture of the ceramic Alexandre Bigot. He won acclaim at the 1900 International Exhibition, but lost his sight in 1904, after which his son Emile Lenoble took over his studio. Chaplet died in 1909.

(Biography provided by Galerie Fledermaus)
Filter Results
to
Item Location
1
1
1
1
Porcelain Vase
By Ernest Chaplet
Located in Chicago, IL
The Venus of Willendorf if she were a pot; this diminutive size is perfectly suited for holding in your hands. This pot is meant to be caressed. Its rather buxom top narrows at the w...
Category 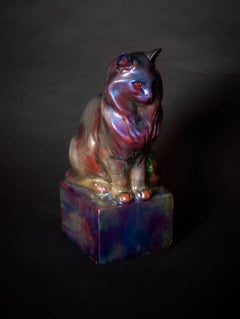 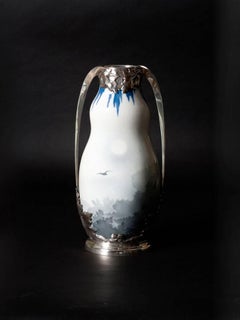