The first art and design movement of the 20th century was all about celebrating beauty of women and nature.
by 1stDibs Editors
Pin
Share
Tweet
Email 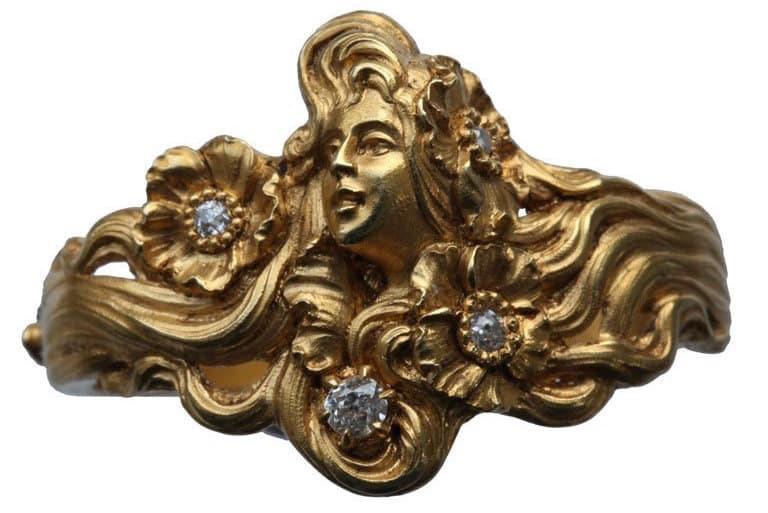 Art Nouveau, which reached its pinnacle in the year 1900, spawned from artists who rejected the historicism of their predecessors to create an entirely new visual vocabulary. This extravagant style is characterized by curvilinear forms and whiplash lines, vibrant materials and dramatic imagery.

The first art and design movement of the 20th century, Art Nouveau was also a reaction against the Industrial Revolution, and took its inspiration from the theories of the Symbolists, the art of the Pre-Raphaelites, the ideas of John Ruskin and his follower William Morris and, most importantly Japanese crafts. (The country was as a fertile ground for inspiration after it was opened to the West in 1854.) The Art Nouveau style touched all manners of the arts, including the most exultant jewelry. 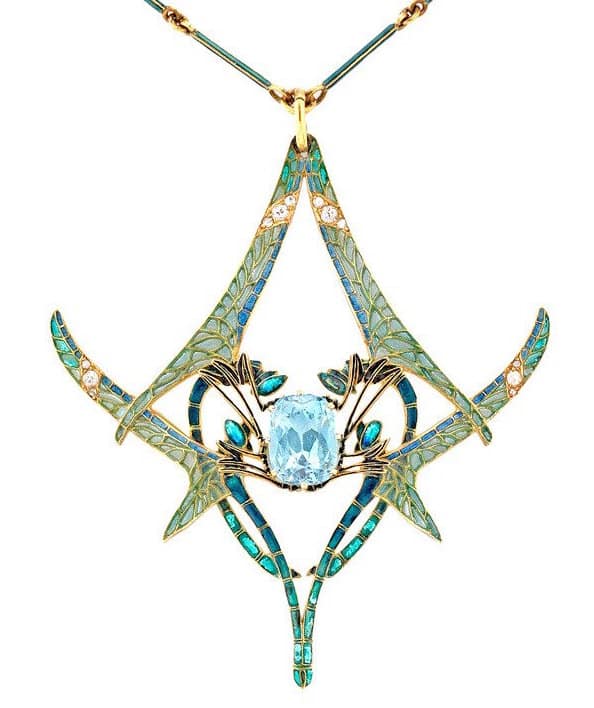 Flora, fauna and women: These were three main themes present in the Art Nouveau jewelry design. Nature was a favorite muse for artists going back to the 18th and 19th centuries, but in the hands of 20th-century artists, it was depicted in new ways.

For example, a withering flower was considered just as beautiful as one in full bloom. Winged creatures, such as insects and birds, were also a popular subject. Dragonflies and butterflies were particular favorites because they morphed so dramatically in different life stages.

This was also a reference to women, whose role in society was evolving. It was not uncommon to see a piece of jewelry that would at once reference a woman as a winged creature (think René Lalique’s famous Dragonfly brooch, circa 1897–98, at the Gulbenkian Collection in Lisbon).

However, just as women’s roles were ambiguous, so was their image, as the femmes nouvelle were simultaneously eroticized and romanticized. A prominent characteristic, for example, was a woman’s hair. Jewelers used flowing locks as a decorative element that transformed into sinuous lines. 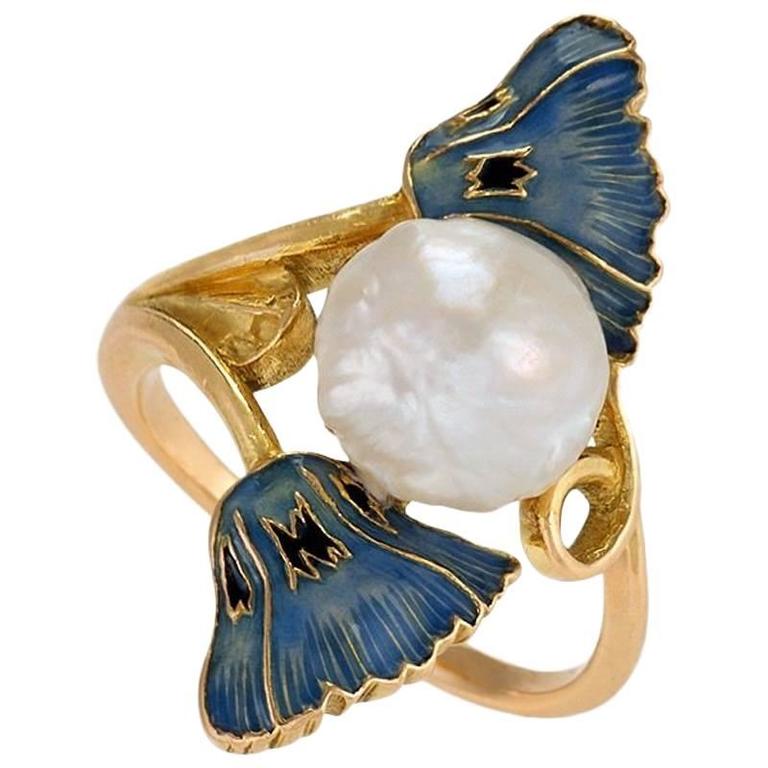 One of the most vital figures in Art Nouveau jewelry (and furnishings) was René Lalique. The artist apprenticed with Louis Aucoc, and in 1880, he began to create designs for such prestigious jewelry houses as Aucoc and Cartier, and eventually added Boucheron and Vever as his clients. Lalique experimented with materials such as ivory, enamel, horn and glass, which he chose for their artistic possibilities. He often combined these materials with precious and semiprecious gemstones such as diamonds, rubies and opals.

Art Nouveau was an international style. Other important names during this time included Louis Comfort Tiffany in the United States, Vladimir Soloviev, who designed jewelry for Peter Carl Fabergé in Russia, Fuset Grau of Spain, Karl Rothmuller of Germany and the Phillipe Wolfers of Belgium. 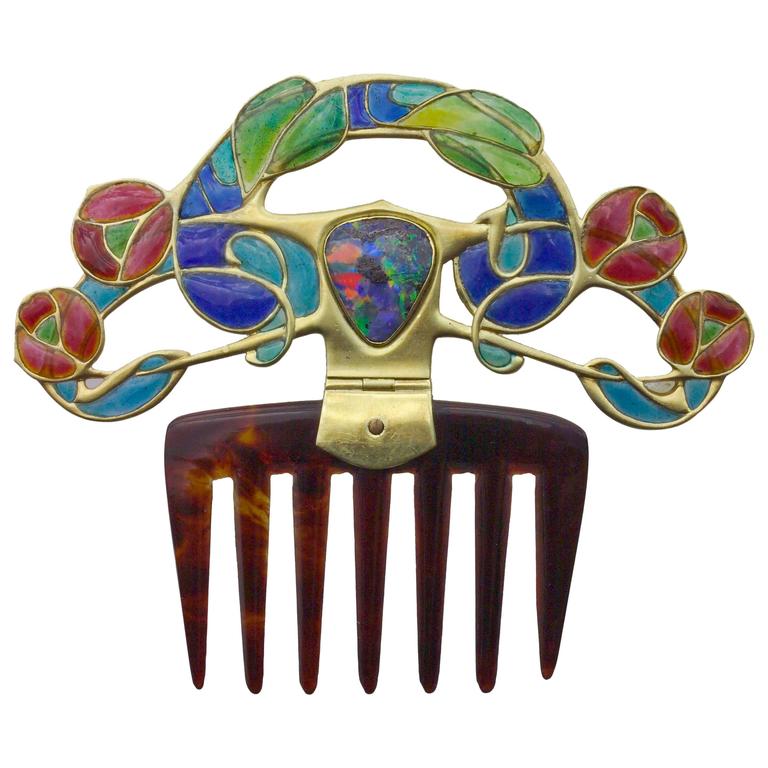 Art Nouveau jewelers distinguished themselves from their predecessors through the use of their unorthodox mediums and methods. Prior to the 20th century, artisans working with jewelry prioritized precious metals and diamonds in their work. This was not true for Art Nouveau creators, whose production was focused on imagery, and vivid colors were needed to translate their visions of peacocks, ivy leaves and temptresses.

Enameling is most often associated with Art Nouveau jewelry, specifically plique-à-jour. Known as backless enamel, plique-à-jour allows light to come through the rear of the enamel because there is no metal backing. It creates an effect of translucence and lightness.

Jewelers also favored pearls, particularly baroque pearls, for their large size and irregular shape. However, opal was the most popular stone — its iridescence harmonized perfectly with the enamel, and it could be carved into any shape. Art Nouveau jewelry was primarily set in yellow gold.

The End of a Style 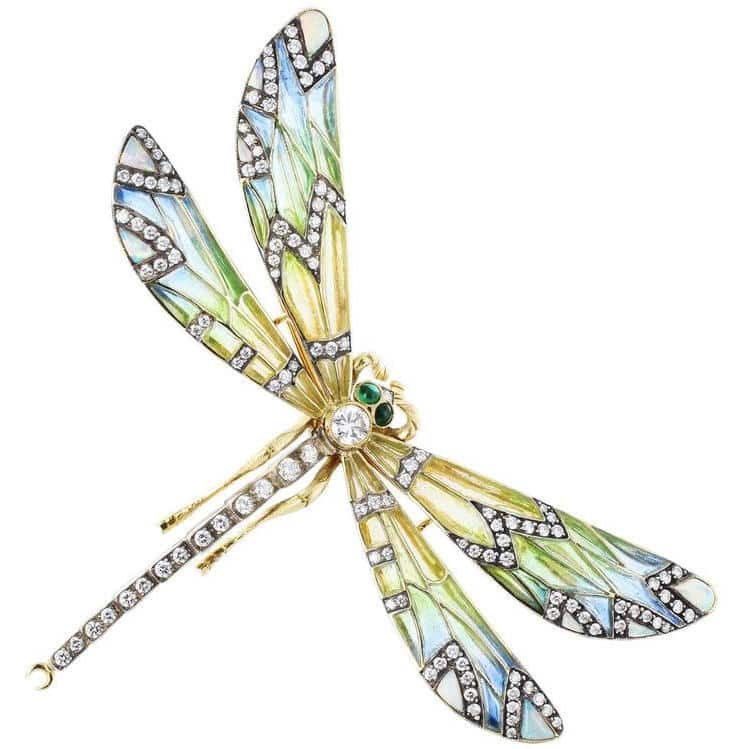 Art Nouveau lasted for 15 years. The jewels, due their size and fragility (plique-à-jour enamel, for example, is quite delicate) were not very wearable and were acquired as objets d’art. Therefore, they were perceived as too decadent, too artistic and only for the select few who had the financial means or the eye to appreciate the pieces.

Of course fashion trends affect our jewelry choices as well. The Edwardian period (1900–10) no longer provided the same ensembles that would harmonize with Art Nouveau jewels. Then again, it offered its own pleasures and distractions.