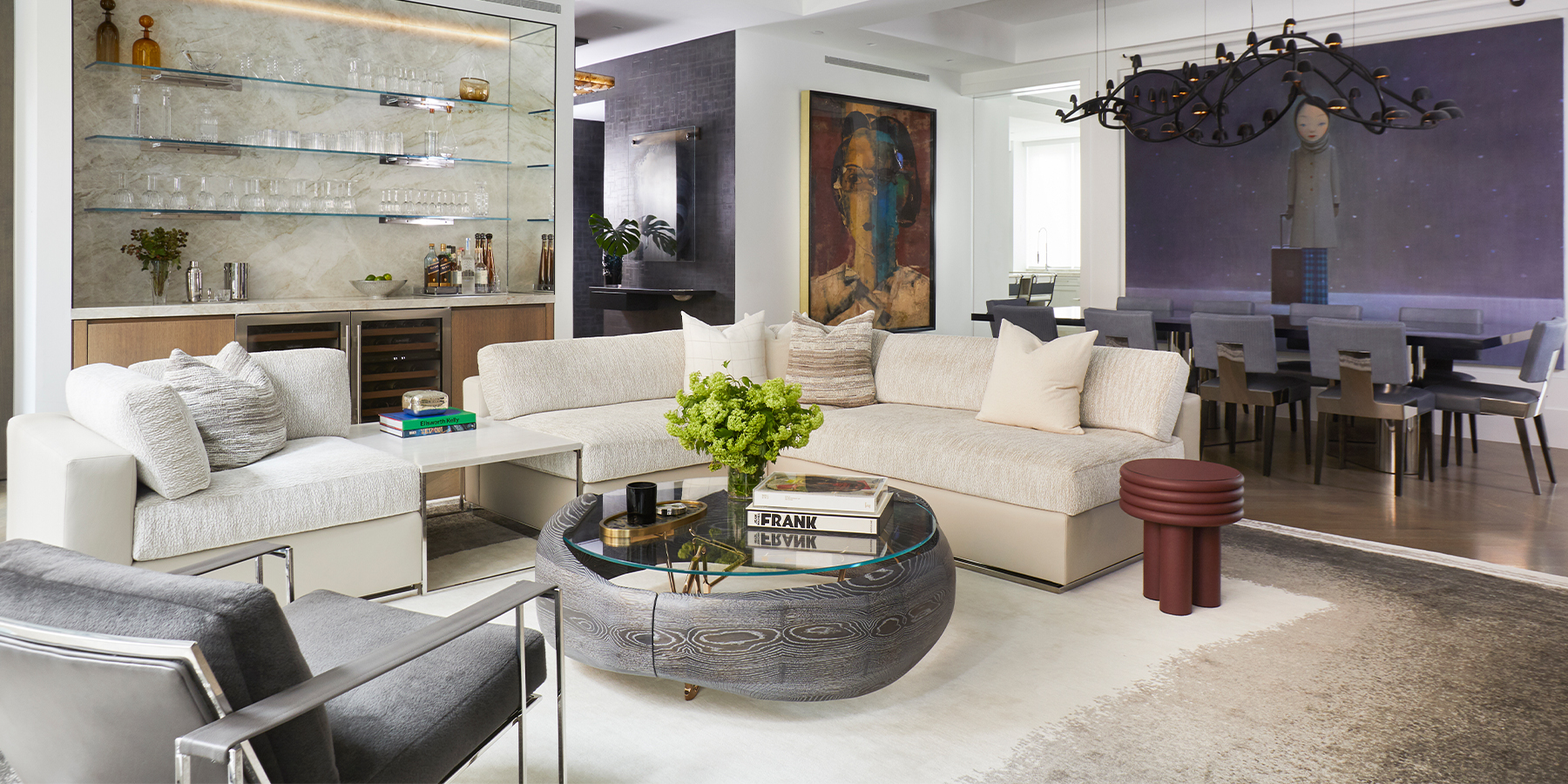 Tour a Tribeca Apartment with Blue-Chip Art in Every Room

Appreciating art in a museum or gallery is one thing; owning a piece and living with it is quite another. To be sure, it’s more gratifying to be around an artist’s vision all the time and to be able to interact with it on your own terms whenever you like. Once you buy a work and hang it in your home, you’re in charge of it — where it’s placed, how it looks, what kind of frame surrounds it and whether the kids or the dog can get at it.

New York–based Pembrooke & Ives recently designed the interior of a four-bedroom, 5,300-square-foot apartment in Lower Manhattan’s Tribeca neighborhood, conceiving a scheme to best show off the terrific collection of contemporary art amassed by the homeowner, a real estate executive living with his wife and three children. The design firm, known for its luxurious and comfortable residential interiors, took the lead in sensitively arranging the works while still providing for a comfortable family life.

The collector emphasized that it’s an art-first kind of place. “We don’t lead with the home and then figure out the kind of art we buy,” he says. “Color appeals to me, so we asked the designers to keep the background and furniture more neutral in order to let the pop of color come from the art.”

The overall collection numbers more than 75 pieces, spread between the family’s apartment, their Hamptons home and, when necessary, storage. “I don’t think of myself as a collector,” the owner adds. “I just started small and worked my way up by going to galleries.”

Pembrooke & Ives designed the building itself too — an exclusive address with a limestone facade housing only seven apartments. Jessica Iwaniec, the lead interior designer on the collector’s place, says that the firm typically would be involved with helping clients choose art, working with a consultant to get the right pieces. But in this case, with what she calls a “mature” collection, “the art informs the design.”

The bold patterns and colors of works by Keith Haring, Jeff Koons, Yoshitomo Nara, Mickalene Thomas and Mel Bochner, among others, meant that Iwaniec and her team made sure the art held the spotlight. “The palette of the fabrics, the wall colors, pretty much all soft upholstery play to the works to some extent,” she says.

The apartment’s art-filled main hallway demonstrates that even interstitial spaces can be boffo showplaces for great work — a museum on the go. “They wanted a gallery feeling in there, and it’s packed with rich artwork,” says Iwaniec, noting that three major pieces are visible in a hallway right by the apartment’s entrance.

These are Alba (2015), a tondo by the 90-year-old Spanish painter Juan Genoves, Mickalene Thomas’s Portrait of Lily (circa 2012) and KAWS’s Tension (2019), which evidences the superstar artist’s more abstract vein. With that much color and form, not too much else was needed in the space. But the Pembrooke & Ives team did add a suede binding to the runner on the floor — “just to elevate it,” Iwaniec notes.

“Paintings, especially figurative ones, have caught my eye more often than not,” says the owner of his collection. Three prime examples of such pieces surround the dining table: Liu Ye’s Leave Me in the Dark (2008), Yoshitomo Nara’s Sprout the Ambassador (2001) and a painting by Manolo Valdés.

The works by the Chinese-born Ye and the Japanese-born Nara jibe well with the painting by the New York–based Spanish-born Valdés. The global combination certainly demonstrates the strength of international figuration and how engaging it is to have faces around the dining table beyond the people who sit at it.

The collector bought the Nara painting, depicting a rebellious girl in the artist’s signature comic-book style, at an edition of Art Basel several years ago, and, as always, he was working on instinct. “There was no plan. I was walking through the fair and got mesmerized. I impulsively bought it, and it turned out to be one of my favorite pieces,” he says, adding that it was the image’s juxtaposition of “innocence and darkness” that he found captivating.

A custom dining table with a lacquered top, Cliff Young chairs incorporating two different leathers and a sculptural chandelier by Frederik Molenschot join the paintings. “We were just trying to make it very harmonious and soothing,” says Iwaniec.

Sharing the same large open space as the dining area is the luxurious living room, which opens onto a terrace. At one end of the sitting area is a built-in, back-lit bar that rests against a marble slab wall set with floating glass shelves. On the wall opposite the bar is a marble fireplace flanked by custom shelving, which is backed by leather to play off the dining chairs, Iwaniec notes.

A custom cream-colored sofa in chenille makes a good perch from which to appreciate the paintings. “It was meant to be subtle,” the designer says of the couch. “We didn’t want to pull attention from what’s on the walls.”

The lighting in the space follows Iwaniec’s principle of “very intentional decisions” when it comes to illumination. “Light brings the art to life and gives it dimensionality,” she says. “Sometimes a piece warrants a picture light above.” Such was the case with Ye’s painting, which is a favored work of the collector and can be seen from almost anywhere in the large, open space.

The collector installed Bochner’s Money (2007) in his office. The work, which incorporates several bright-green hues, proves itself the star of the otherwise neutral-colored room. The drippy, verdant words in the painting include “Gelt,” “Dough,” “Cash” and “Moolah.” It’s in keeping with the oeuvre of the 80-year-old American conceptual artist, who is known for his playful text works.

“It’s an easy piece to hang and live with,” says the collector. Going into the project, he told the designers that he wanted it hung over his desk.

“The room was designed around it,” says Iwaniec. The office’s furnishings include a striking black glass chandelier by Holly Hunt, a custom sofa in linen and a custom desk with USM storage below. If there’s a piece with almost as much flair as the painting, it’s the Almora armchair, designed by Nipa Doshi and Jonathan Levien for B&B Italia.

The main bedroom features a photograph by German lensman Christian Voigt, Philae Temple (2010). It holds pride of place on a 15-foot-long wall.

“I had all the dimensions of the walls with me when I was at an art fair with my daughter, and she said, ‘Daddy, I really love that photograph,’ ” the homeowner recalls. Voigt is acclaimed for his hyperreal images of architectural spaces — such as this one of a sacred space in Aswan, Egypt — and “the scale and vibrant color jumps out,” the homeowner adds. “It was the perfect piece, but a pain to get into the apartment.”

Iwaniec and her team added a bronze-and-smoked-glass chandelier and a hand-tufted wool-and-bamboo-silk carpet to complete the bedroom’s look.

Even the kids’ bedrooms are graced by colorful, pop-y figurines from KAWS’s “Companion” series and Koons’s whimsical balloon-themed collection. In one of the bedrooms, the pieces sit above a custom desk set against splattered-dot wallpaper and a blue carpet.

The cozy family room, open to the modern kitchen, is dominated by Keith Haring’s Untitled (1984), a graphic, ebullient figurative painting in the late artist’s hieroglyphic street-art style. “That piece was the first big step up in collecting for me,” says the owner of the 2003 purchase. “I think Haring was undervalued compared to Jean-Michel Basquiat, and I’ve always loved the work.”

Given the presence of three young children, Pembrooke & Ives took protective action to preserve the piece — an important consideration for any collecting family. “We created a plexiglass enclosure for the bottom of it,” says Iwaniec.

Adds the collector, “My kids know never to touch the art. It’s more for when other kids are in the house.”

Browse Work by Artists Features in This Tribeca Home