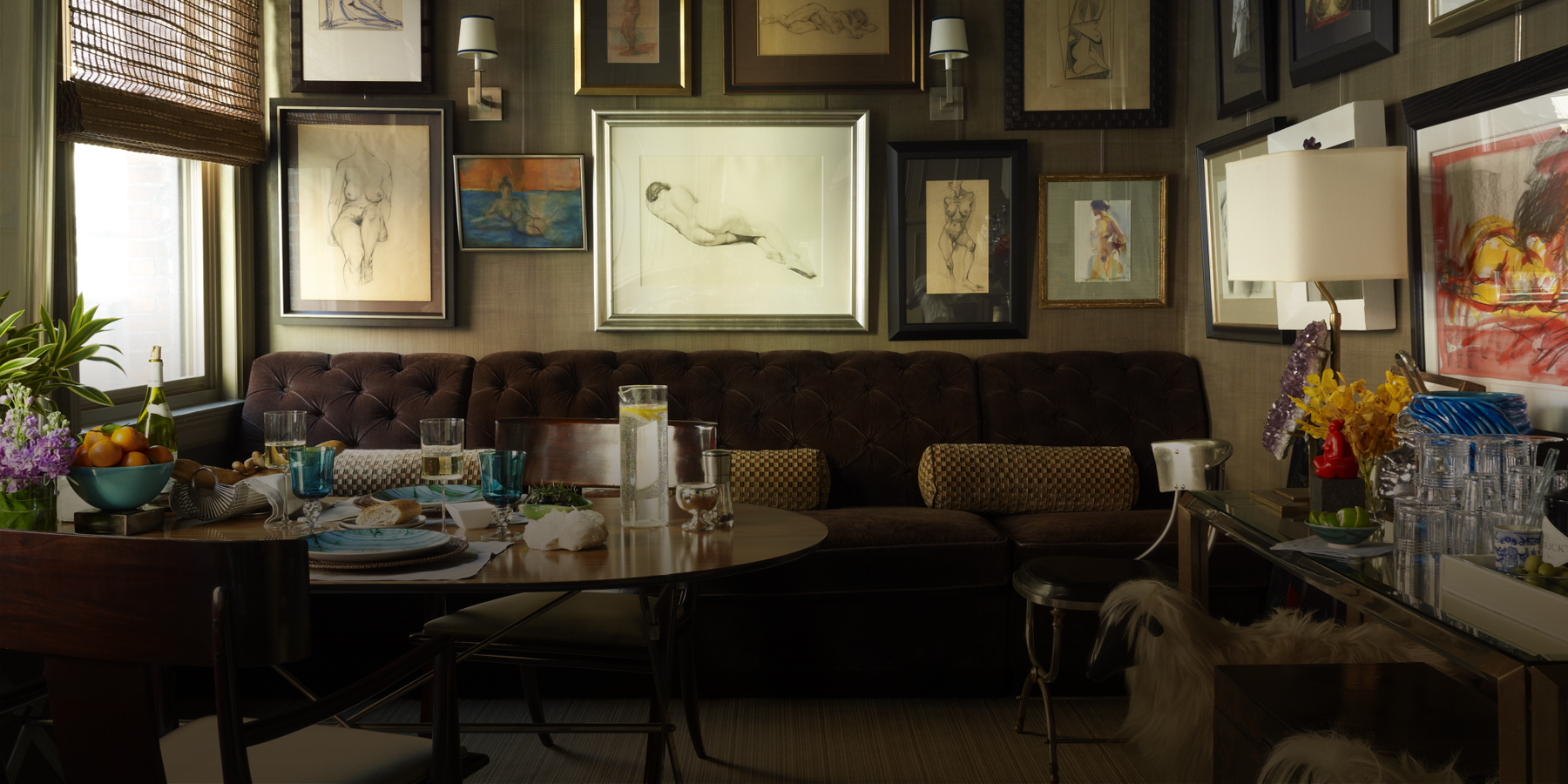 This bronzed, square-jawed talent is the designer of choice for a host of sports stars, including Jorge Posada and A-Rod. 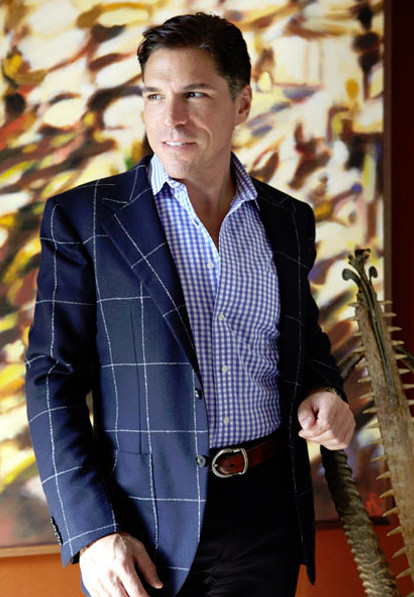 Having once thought he’d pursue a career in television news, New York decorator Robert Passal found his métier in interior design. Top: The study-cum-dining-area in the designer’s New York home features a dining table and banquette of his own design, French sheep ottomans from Pascal Boyer and nudes collected around the world. Photos by Joshua McHugh

Sitting with New York–born and –based interior designer Robert Passal at Sarabeth’s restaurant near his Park Avenue South office, it’s no stretch to imagine him in front of television cameras delivering the nightly news: At 49, he is fit and square-jawed, with perfectly quaffed hair and a resonant voice; he is nattily dressed in blue slacks, a tailored brown-, cream- and blue-checked jacket and two-tone wingtips; and Passal jokes about what is now a signature: a complexion that’s  bronzed even in the dead of winter — “I think I’ve become eternally tanned,” he says, laughing.

Indeed, although Passal probably had the coolest undergraduate dorm room at the State University of New York at Albany (“I was over the moon about Jackson Pollock then,” he recalls. “I did the entire room in splattered paint, built these terrific cantilevered shelves and made a desk out of two ionic columns”), he was there to study communication arts — not fine or decorative arts — expecting to pursue a network-anchor trajectory.

Had Passal followed his intended path, the design world would have been deprived of his stylish take on updated tradition, to which he brings a unique flash of glamour and chic. “I’m not a modernist,” he says. “I like layered luxury.” Mixing graphic patterns, notes of saturated color and art that often slyly comments on celebrity and our hyper brand-consciousness, his interiors have the same Continental panache that defined Yves Saint-Laurent and Pierre Bergé’s Rue de Babylone apartment in Paris, although Passal relies on a more diverse mix of styles than that Art Deco–enamored fashion duo. 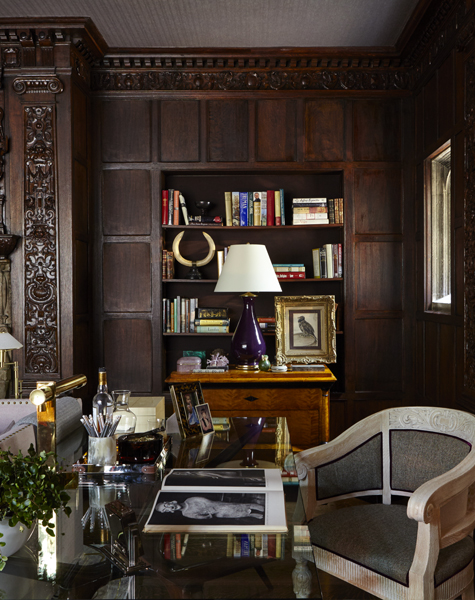 For his study in this year’s Holiday House in New York City, Passal juxtaposed a mid-century Italian Carli D’Carlo desk from Pascal Boyer with an early-20th-century Belgian chair from Lee Calicchio, and a vintage Casella brass desk lamp  from Gustavo Olivieri with a traditionally inspired lamp by Christopher Spitzmiller. Photo by Joshua McHugh

Fortunately, a post-college internship at ABC convinced him that the role of newscaster was not something he wanted to pursue professionally. So Passal —  born Passalacqua, which remains his legal name, and raised in Forest Hills, Queens — drifted for a time, working in restaurants and eventually managing Manhattan’s Hard Rock Café for two years. He was 24 and, he says, knew that this career “was not something I’d be able to sustain.”

One day his roommate handed him a copy of The Artist’s Way, Julia Cameron’s popular book about tapping into your creative potential. “He was into New Age,” Passal says of his roommate. “I was definitely not buying it initially. But by week four or five, I realized that my passion was interior design, and I was holding myself back because I thought that only gay men were interior designers, and, of course, I wasn’t out yet.” (Today he is happily partnered with Texas-born Terence Jones, who heads a technology sales force. “He’s a much more a type A personality,” says Passal.)

“I’m not a modernist,” says Passal. “I like layered luxury.” 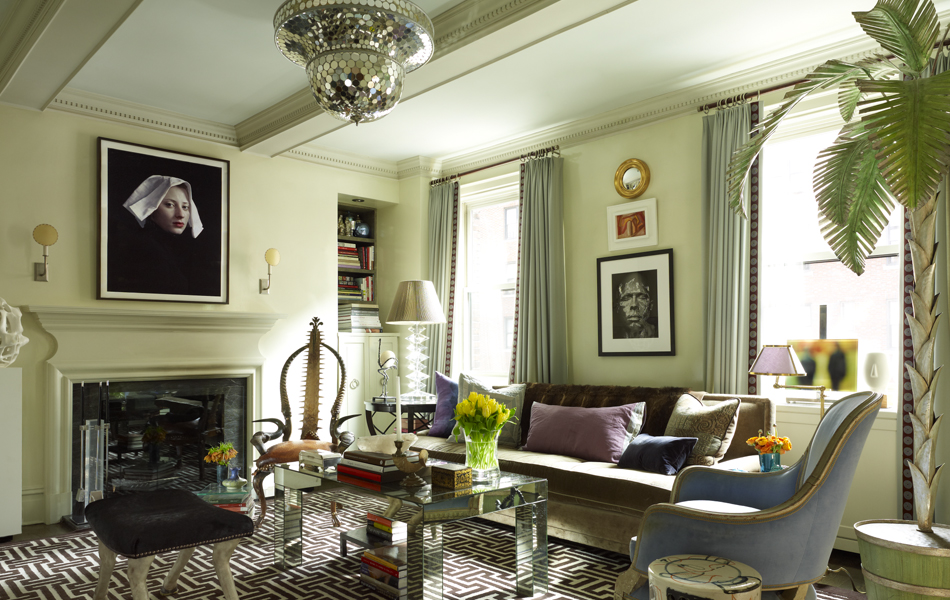 “My home has become my think tank,” says Passal, “an opportunity to experiment with collections and items of contrasting points of view.” He designed the sofa and mirrored table himself; the hand-painted Reinaldo Sanguino stool and the Napkin portrait by Hendrik Kerstens are from Dean Project. He purchased the mirrored ball, originally from the Rainbow Room, at auction. Photo by Joshua McHugh 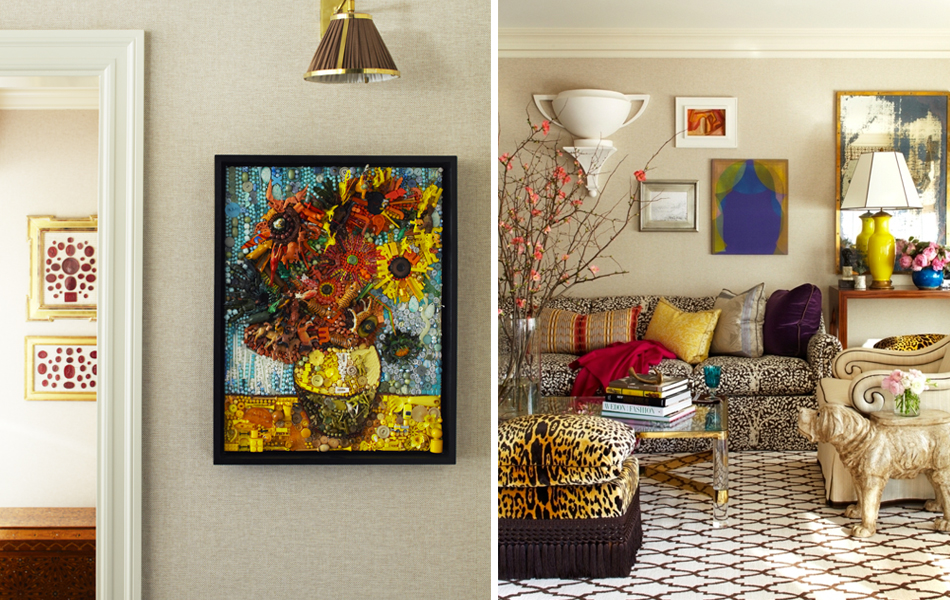 Left: “Art and accessories make a home personal,” says Passal. This collage, composed of found objects (toys, buttons, thimbles) and created in obvious homage to van Gogh, adds whimsy and personality to a classic New York City apartment. Right: In the same apartment, a vintage David Hicks pattern on the custom sofa and a Karl Springer cocktail table from Gustavo Olivieri give some old-meets-new élan to a custom-created mirror and rosewood console. Photo by Deborah Jaffe 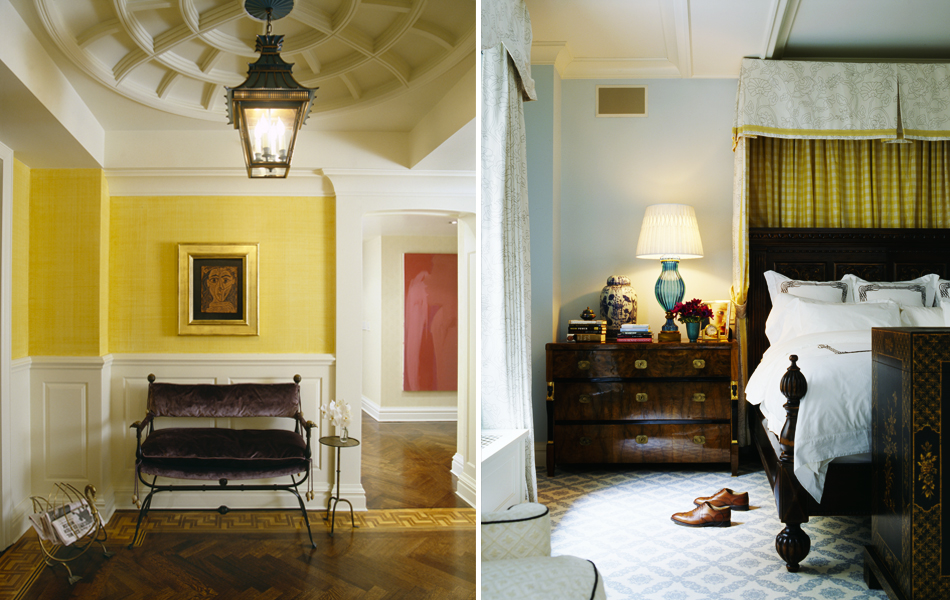 Left: In the former home of New York Yankee Alex Rodriguez, Passal stenciled a Greek key pattern on the floor, atop which he placed a bronze bench from Glen Dooley Antiques. The Picasso was purchased through Leila Heller Gallery. Right: In a bedroom, the Egyptian Revival Biedermeier chest is from Lee Calicchio, and the Murano bedside lamps are from Remains Lighting. Photos by Joshua McHugh 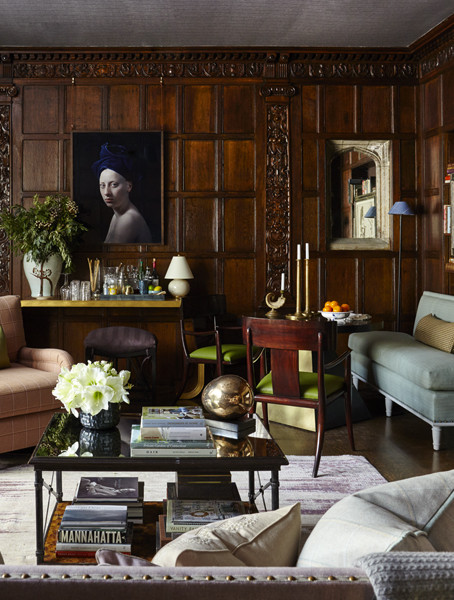 Passal conceived the Holiday House study as a manifestation, he says,  of “living with familiar items that have been assembled in a way that makes the space feel layered and, most of all, established.” He chose custom upholstery in heathered hues to contrast with the existing dark-wood paneling. The cocktail table is from Newell, the tall brass candlesticks Etós. Photo by Joshua McHugh

Passal didn’t know any interior designers, but he did know someone who worked for one. “My friend helped me concoct a résumé,” he recalls. “I went floor by floor at the D&D Building handing it out at showrooms I thought had my aesthetic. By the time I got home, I’d received a call from John Rosselli.” He worked for the eminent antiques dealer from 1993 to ’95. There, he says, “I would meet all these designers I’d later come to know as colleagues.” He also learned a lot about design and antiques, on-the-job training he supplemented with night classes at the Fashion Institute of Technology. One of his favorite frequent clients at Rosselli, Daniel Barsanti, of the firm Healing Barsanti (now HB Home Design Studios), wound up hiring him as a junior designer.

Barsanti and his business partner, Patricia Healing, says Passal, “taught me about detail, proportion, balancing color. I think learning by doing is far more valuable than learning to draft and do other things they teach you in design school.” Eventually, Passal realized that “all designers want to express themselves the way they want to be seen.” So in 2000 he left to open his own firm. “I worked from home sixteen hours a day at my dining table,” he recalls. “It was crazy.”

As the business grew, Passal leased a space with antiques dealer Pascal Boyer in Chelsea, where he remained for a decade; last year he relocated, solo, to East 25th Street. His big break came in 2005, when House & Garden featured the Manhattan apartment he designed for Yankees catcher Jorge Posada. This led to a host of sports figure clients, including fellow Yankees Alex Rodriguez and Jason Giambi, as well as various NBA players. 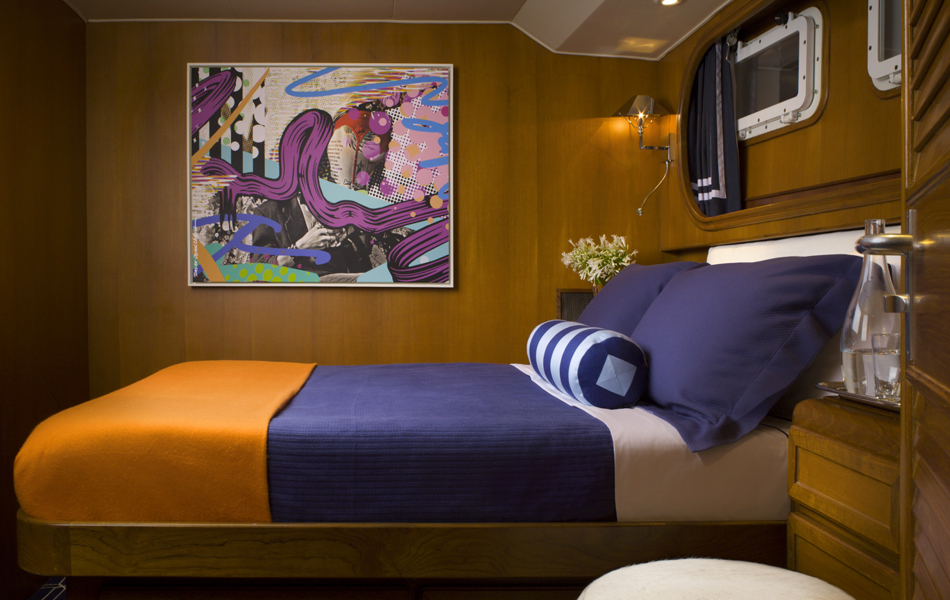 Restoring a vintage yacht, Passal used contemporary art and pops of primary colors to bridge the gap between the ship’s past and its present. Photo by Ken Hayden 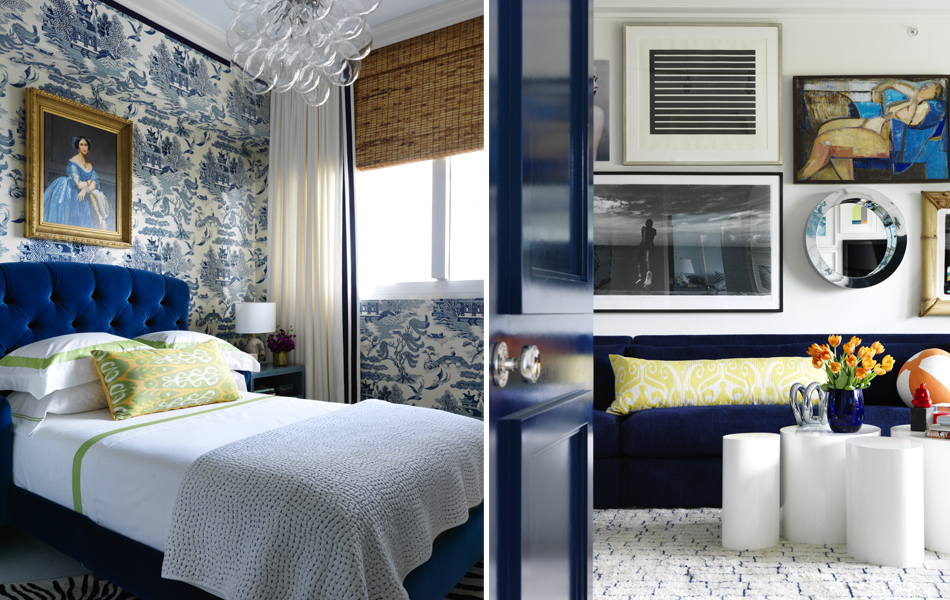 Left: At Passal’s Miami home, a hand-screened Cole & Sons grass-cloth wall covering in blue and white establishes the palette, and mid-century bedside tables from Robert Massello Antiques flank a custom bed. Right: The blue-and-while theme continues throughout the home; here Passal lacquered custom doors in deep cerulean, adding a custom Moroccan carpet and a 15-foot bespoke sofa that doubles as a dining banquette. The art, collected over many years, ranges from work by Donald Judd to vintage Cubist-inspired paintings of unknown origin. Photos by Johnny Valiant 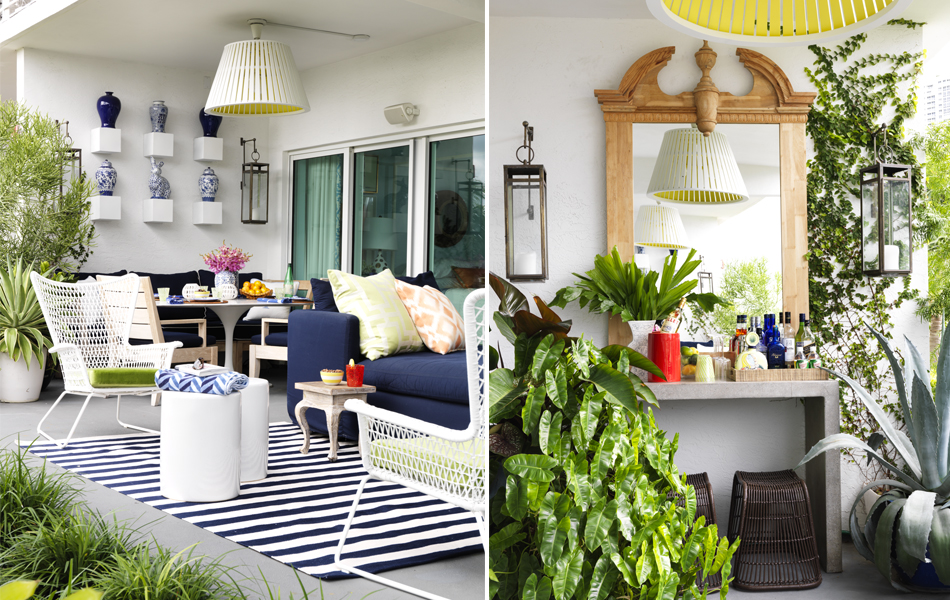 Equally conducive to low-key solo relaxation and to more lively entertaining of friends and family, the patio of Passal’s blue-and-white Miami home mixes indoors and out, as well as styles and materials, as evidenced by a Federal-style mirror, stripped of its paint, hanging over a highly modern concrete bar. Photos by Johnny Valiant 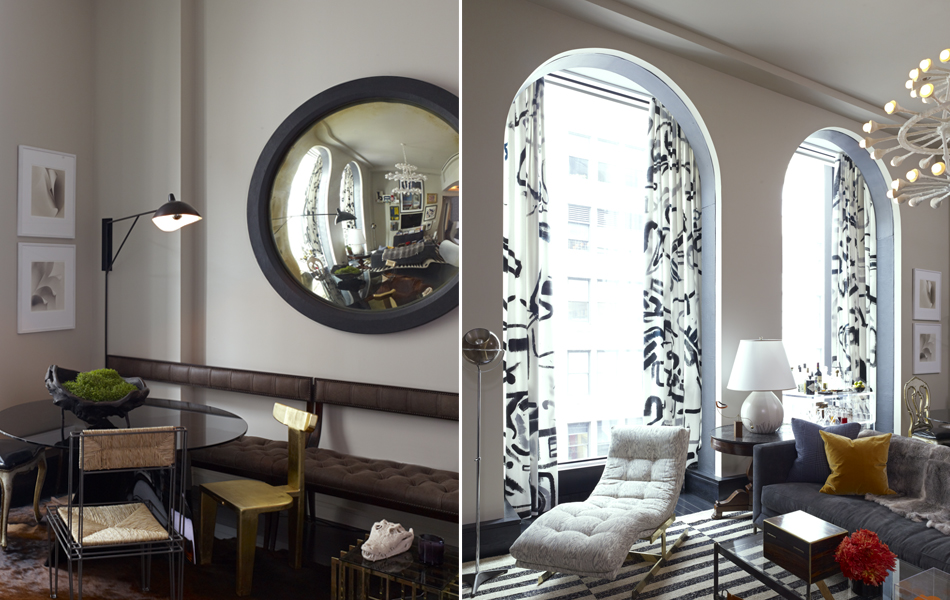 For the bachelor pad of a young New York client, Passal turned to a cast of artisans whose work he’d always admired. Left: The dining area features a klismos-inspired bespoke banquet and a 19th-century English mirror from Harbor View Center for Antiques. Right: Hand-painted curtains cover tall windows. Brooklyn-based plaster-master Stephen Antonson created the chandelier, while the vintage chaise is from the Antique and Artisan Gallery. Photos by Peter Murdock 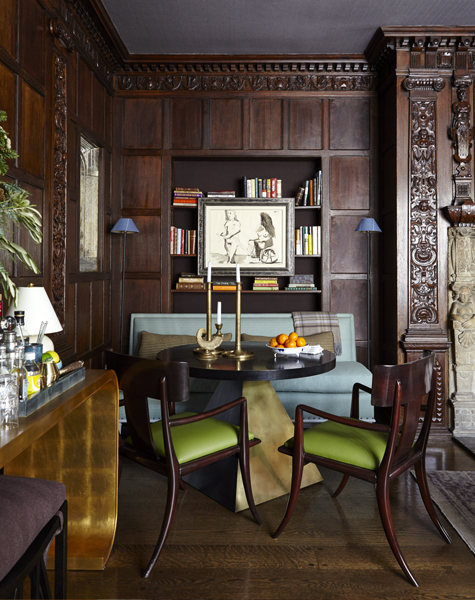 In a corner of the Holiday House study, the T.H. Robsjohn-Gibbings klismos chairs are from Pascal Boyer and the console is from Aerin Lauder‘s furniture collection. Photo by Joshua McHugh

Today, says Passal, that client base has expanded to include people from a wider array of professions, most of them in their 50s and 60s. Typically, he explains, they are folks with a point of view, who want their spaces to look “collected, as though they’ve gone through an evolution.” The interiors he designs for them reflect Passal’s predilections. “I’m a big advocate of contrasting elements,” he observes. “Mixing various periods is very popular today. But to do it well, you have to pair two very opposing periods — something quite modern up against something eighteenth-century French — to create a tension. Or I’ll take a nineteen-twenties gilded chair and reupholster it in a graphic black-and-white fabric hand-painted by a contemporary artist.”

Passal is also fond of color, though he is careful to not let it overwhelm a space. He prefers to deploy deep shades on an accent wall, for example. “Someone told me I use color in ways that don’t feel dominating or immediately noticed,” he says.

In addition to New York City,  Westchester County and Long Island, Passal has designing projects in Miami, where he maintains an apartment to which he retreats when he needs an escape from New York — and to preserve his tan. He recently finished the complete renovation of the outdoor restaurant space of the exclusive Core Club on Manhattan’s East 55th Street. Next year will see the debut of Passal’s first outdoor furniture collection, for Opiary, and he is in the process of designing a fabric line, although he has yet to shop it around to potential textile houses for production.

All these endeavors are guided by an innate impulse described in the words that design legend Albert Hadley penned on one of his drawings, which he gave to Passal and which holds pride of place in Passal’s office, just above his desk. On it Hadley wrote, “Chic is an attitude.” Contemplating this statement, Passal says, “You have to feel it.” And you know Passal does feel it — much deeper than that tan of his. 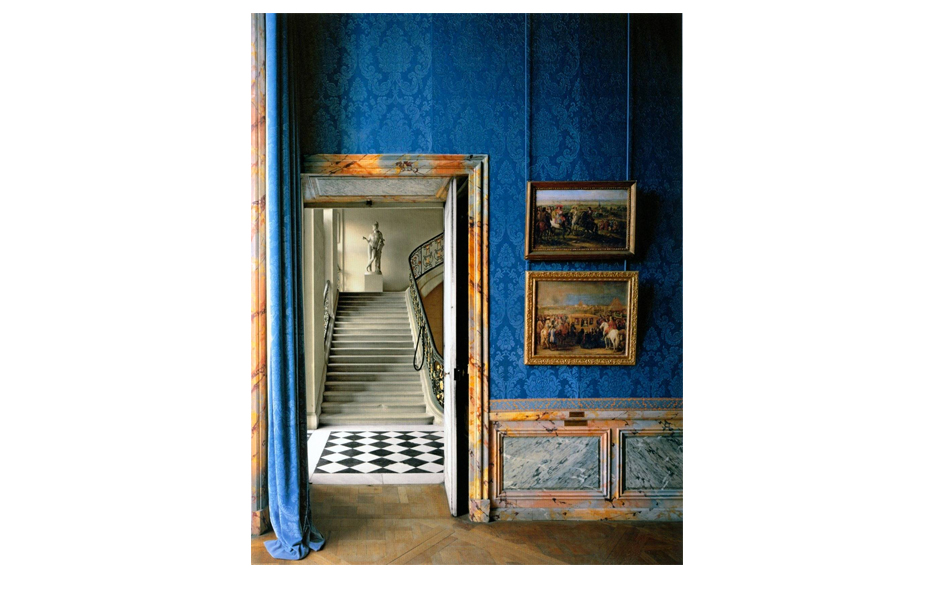 No other living photographer I’m familiar with can turn Versailles into a contemporary masterpiece. Polidori’s color intensity and juxtaposition are unrivaled. 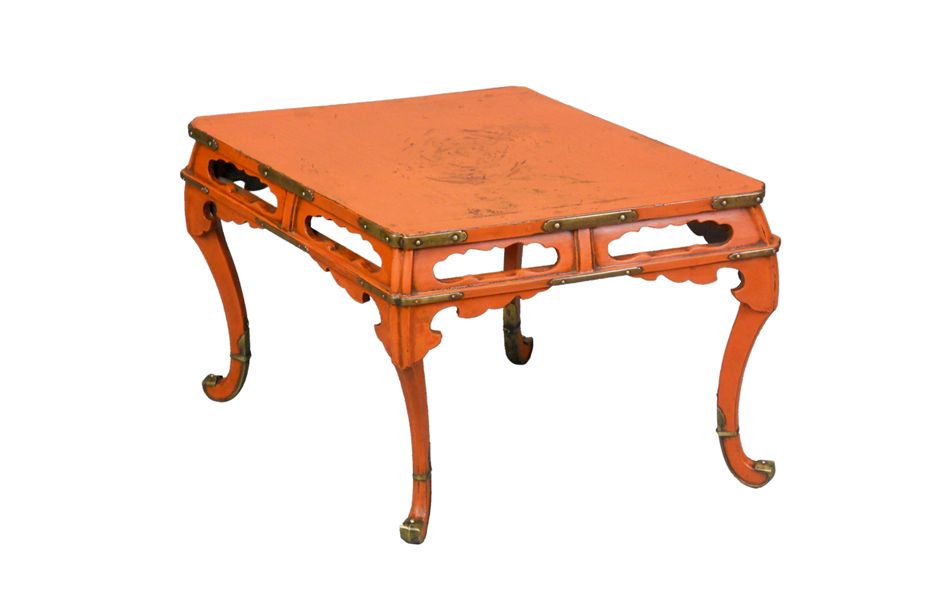 This Edo-era Asian beauty would be right at home in a contemporary residence. A little bit of color this powerful would add so much character to minimalist surroundings. 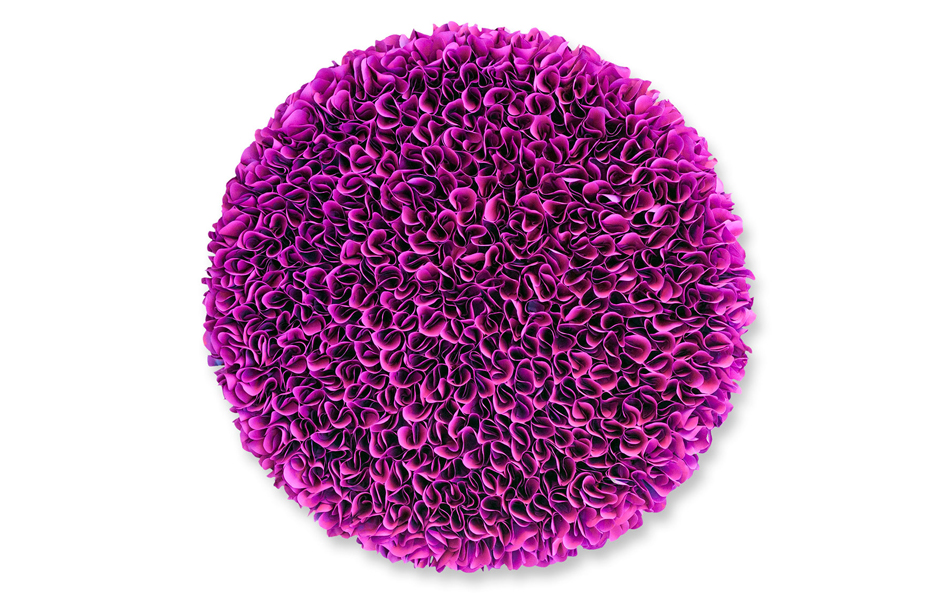 A pop of intense color goes a long way in making a space come to life. This sculptural piece by Zhuang Hong Yi delivers a delicate yet bold punch. 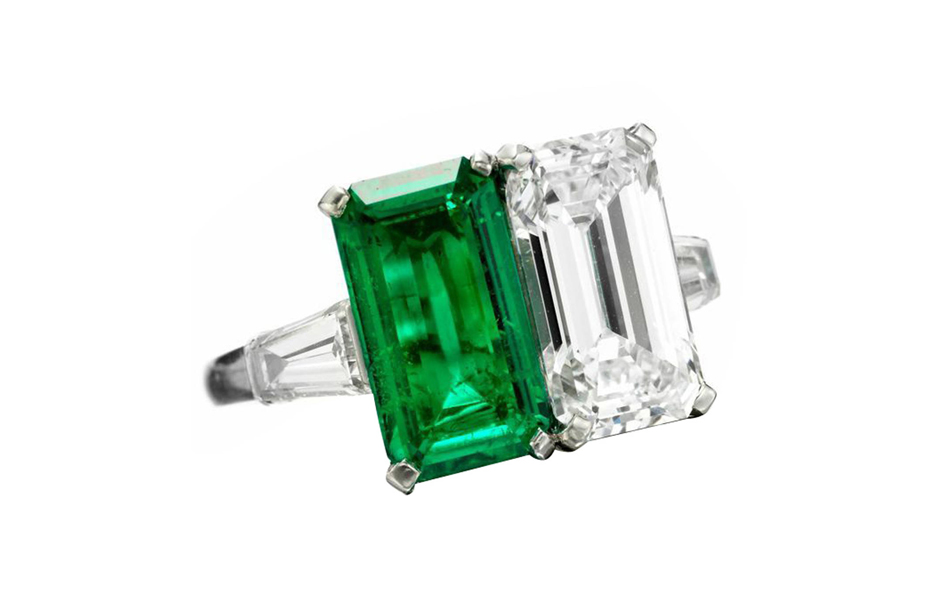 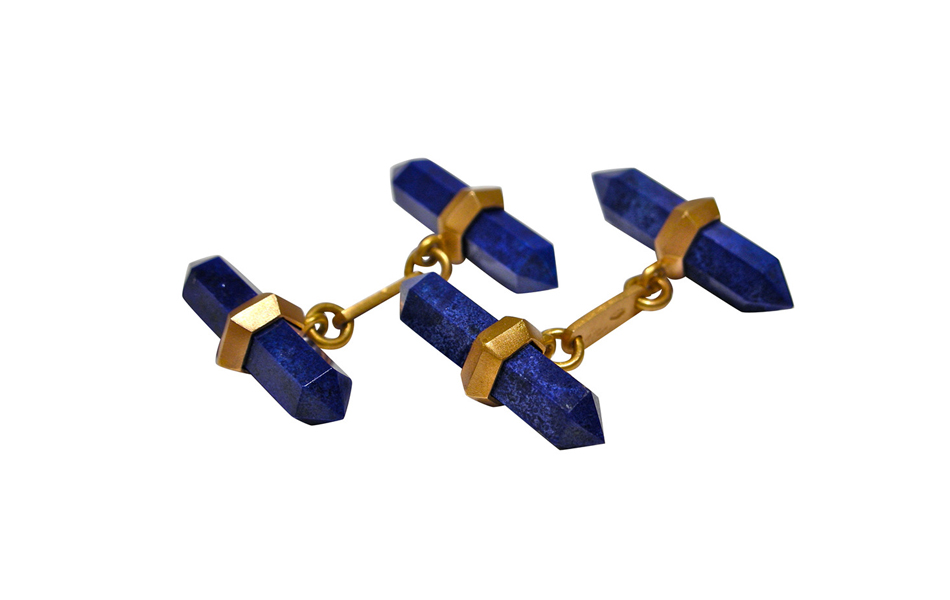 I love the versatility of these cufflinks, which can work with a crisp white shirt and jeans as well as with black tie. 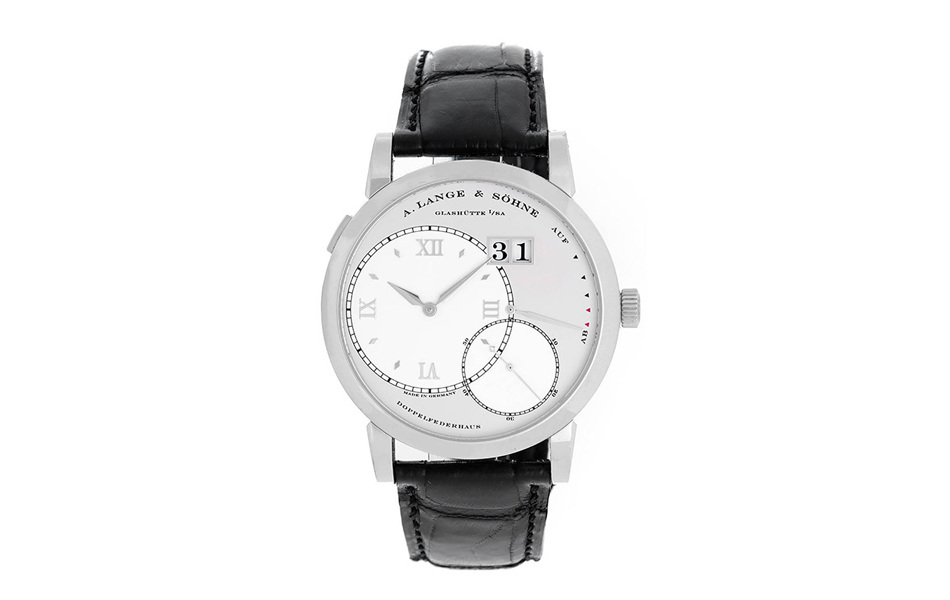 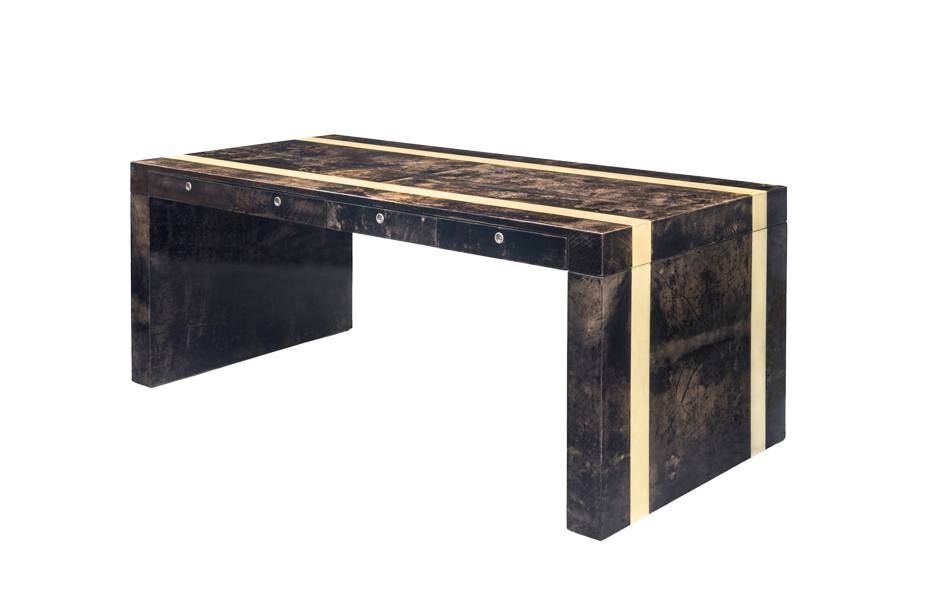 This is one of the most magnificent Tura pieces I have ever come across. The contrasting parchment stripes truly make it sing. 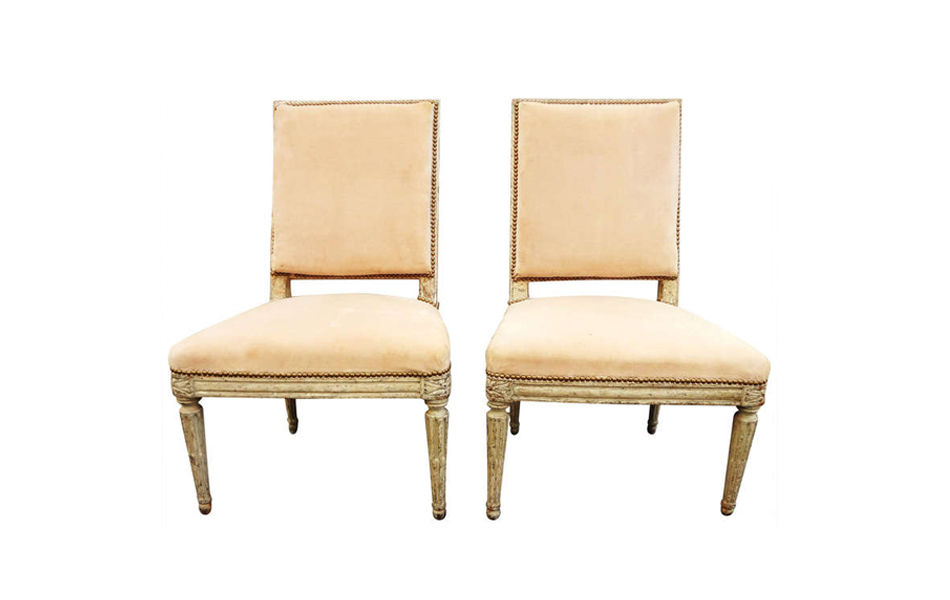 Pair of painted side chairs from the collection of Cole Porter, 18th century, offered by David Bell

In my interiors, it’s all about the mix. These beauties would certainly be right at home pulled up to a sleek contemporary breakfast table. 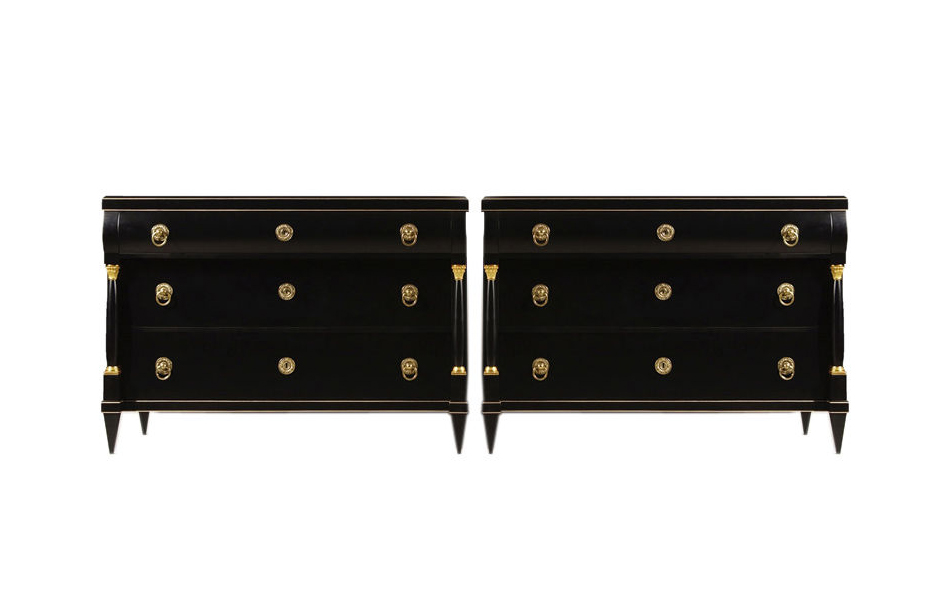 For impact, I would love to place this absolutely stunning pair of contemporary commodes in a pale monochromatic room. Personally, I wouldn’t think twice about incorporating them into my space as bedside commodes. 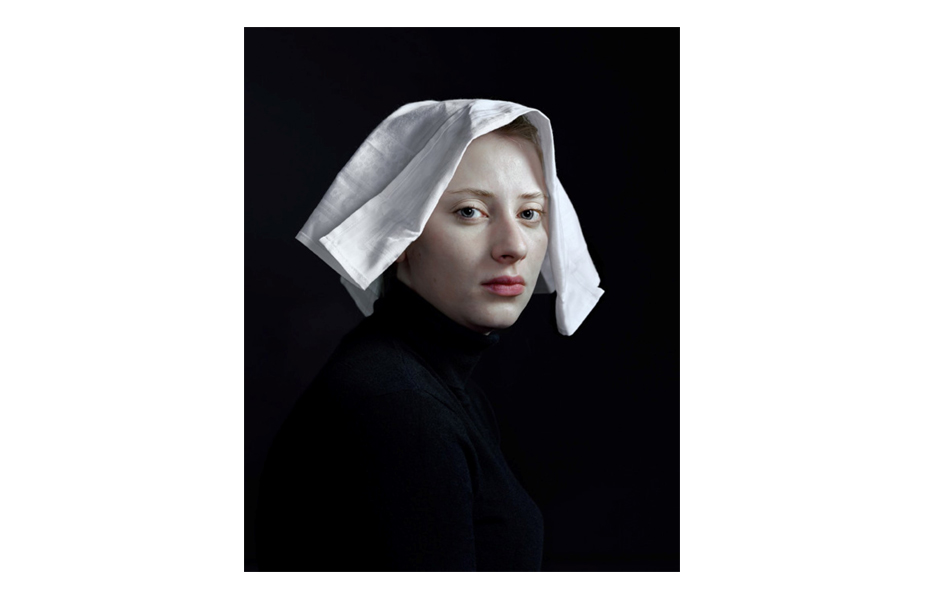