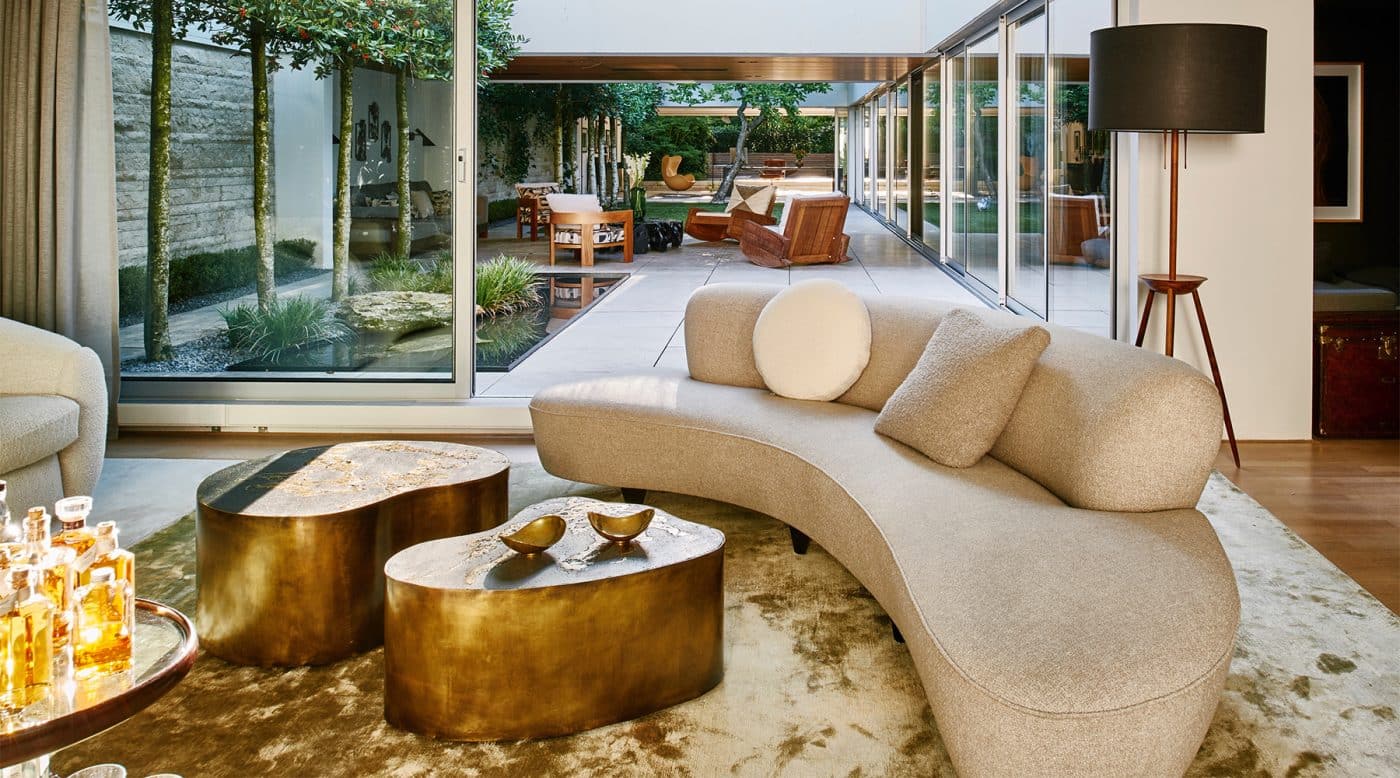 With an eye for the exceptional, this gallerist turned designer creates spaces punctuated by standout pieces.

May 15, 2022Back in 2010, German interior designer Robert Stephan was in New York and decided to pay an unannounced visit to one of his favorite furniture designers, Silas Seandel. “I went to his workshop in Chelsea and simply rang the bell,” says Stephan. The pair ended up chatting for several hours and have since become firm friends. “He made quite an impression on me,” recalls Seandel. “It turned out he knew more about my work than I did. He had an encyclopedic memory of all my pieces.”

Needless to say, a number of them have made it into Stephan’s interior design projects. A couple of Seandel’s bespoke bronze and concrete cocktail tables are the focal point of the sitting room in a low-slung 1970s villa Stephan decorated in the Harlaching district on the outskirts of Munich. The house, which was once occupied by the Austrian artist Hermann Rastorfer, has an unusual floor plan: It is just 45 feet wide but nearly 200 feet long. One of Stephan’s modifications was to transform a photo studio in the basement into a basketball court, dominated by a mural inspired by the geometric motifs Gio Ponti used in the now-legendary Villa Planchart, in Caracas, Venezuela.

When asked to describe Stephan’s style, the villa’s owner characterizes it as “effortless, contemporary, contextual, masculine with the right sensuality.” He requested that the house have a Californian vibe, and Stephan responded by creating a patio with a wooden ceiling that would not look out of place in Beverly Hills and incorporating a significant amount of American design. In the kitchen are a BDDW walnut-slab table, a Lindsey Adelman chandelier and a set of Conoid chairs from George Nakashima Studio.

Those items may be contemporary, but one thing that particularly typifies Stephan’s work is a love of postwar pieces created in the United States (he cites designers like Paul Frankl, Paul Laszlo and Paul Evans among his favorites). He also generally sticks to a muted palette of browns and grays, and likes his rooms to have a timeless quality. “For me, it’s not about making something fashionable or too wow-ish,” he explains. That said, he doesn’t eschew pieces by in-demand contemporary designers, favoring highly crafted, limited-edition items that he feels will stand the test of time. “Robert can school his clients in what’s particularly collectible,” notes Seandel. “The items he chooses will increase in value, and he doesn’t equivocate when it comes to quality.”

Two perfect examples can be found in a penthouse he decorated near Munich’s Gärtnerplatz: a silver-plated-brass and wood cocktail table by Vincenzo De Cotiis in the living room and Hervé Van der Straeten’s Tumulte mirror in the kitchen. The flat belongs to entrepreneur Oliver Grünig, whose business interests include a construction company and a fashion label. When Grünig acquired it, he had just separated from his wife and imagined creating a slightly clichéd bachelor pad (his aesthetic starting points were James Bond movies and dimly lit nightclubs). In response, Stephan came up with a scheme that is certainly masculine and luxurious but also original. He brought in examples of 1970s design like a Paul Evans stalagmite dining table, clad the walls in Alcantara (a fabric often used in high-end automobiles) and sourced some more-unusual pieces, like the two slipper chairs with stainless-steel bases in the sitting room, created by French designer François Monnet in the ’70s. “Robert’s not like other German interior designers at all,” says Grünig. “He always shows you things you haven’t seen before.”

Born in Munich in 1971, Stephan traces his passion for design back to his teenage years. He recalls making special trips to the city’s Central Station to pick up copies of Architectural Digest. Later, he studied economics at both the local University of Applied Sciences and London’s Greenwich Polytechnic before embarking on a rather circuitous career path. Among other things, he did marketing consulting for a subsidiary of Deutsche Bank, founded an online retail site that offered only one discounted product per day and operated an erotic clothing store. From 2000 through 2003, along with his ex-wife, Carolin, he ran a Munich-based design gallery called Eileen (for Eileen Gray), which stocked vintage pieces by creators like Jorge Zalszupin and Percival Lafer, as well as contemporary work by designers like Marc Newson.

Impressed by the Stephans’ taste, one of the gallery’s clients asked them to help her decorate a house close to the city’s English Garden. Word of mouth led to other commissions — for a hair salon and a menswear store in Stuttgart and, in 2008, to their first large-scale residential project: an 8,600-square-foot contemporary villa on the Ammersee, to the west of Munich. They decorated the home, designed by architect Stephan Fuchs, in part with vintage pieces by Sergio RodrigueS, Oscar Niemeyer, Ado Chale and de Sede.

In 2016, the couple split both professionally and privately, and Stephan now oversees his own team of three, who work out of an atelier-like space in Munich’s Schwabing district. On the wall opposite his desk is one of his proudest possessions: a signed pencil drawing of a sofa, given to him by Vladimir Kagan after they met at the 2010 ICFF fair in New York. Stephan’s current projects include a chalet close to Kitzbühl, in Austria; a large apartment near the Piazza del Popolo, in Rome; and a single-family house designed by David Chipperfield in Munich.

Since separating from his wife, he has opted for a rather unconventional living arrangement, sharing a two-story apartment with a longtime male friend. “It’s unusual for forty-plus straight men to live together,” he admits, but it seems to work. “We’re both workaholics,” he continues. “When I get home, he’s sleeping or with his girlfriend. So, it’s not like we spend every evening together.”

Stephan has decorated his bedroom and the common living areas with numerous pieces from his personal collection. Among these is a rare Aldo Tura bar cart made from brass and goatskin. “Every bachelor pad needs a bar cart,” he quips. “That’s my philosophy.” There is also an Oscar Niemeyer chair and ottoman, an Angelo Brotto table lamp and a nightstand by the late German artist Derick Pobell, best known for his kinetic mobiles. “It’s one of the few tables he created,” notes Stephan. The striking contemporary chandelier from Edizioni Design Lighting over the dining room table draws a lot of attention — much to Stephan’s amusement. “All my friends comment on it,” he says. “Everyone wants one. And you know what? They’re not even that expensive.” 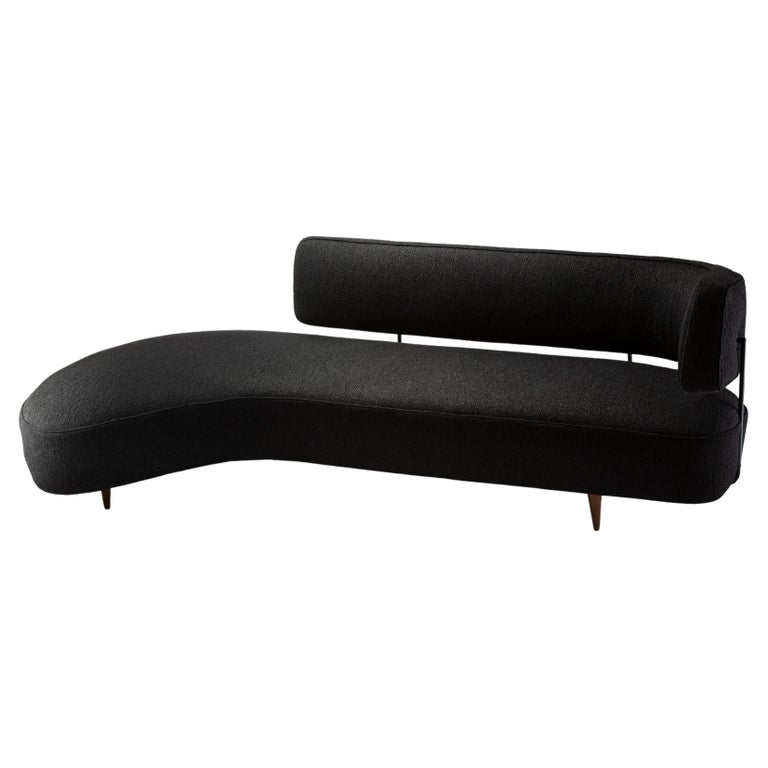 “Taichiro Nakai is only known to real design connoisseurs. His organic Freeform sofa would work particularly well in any art collector’s home.” 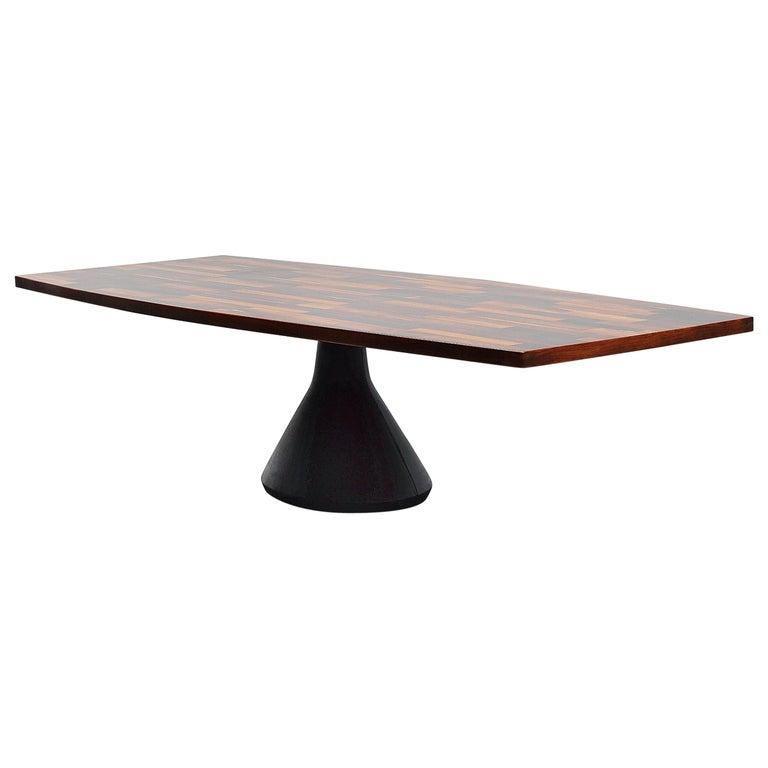 “I like to mix vintage pieces from different places of origin. This Brazilian dining table by the iconic designer Jorge Zalszupin has such a pure but strong character. So you can mix it within any interior style.” 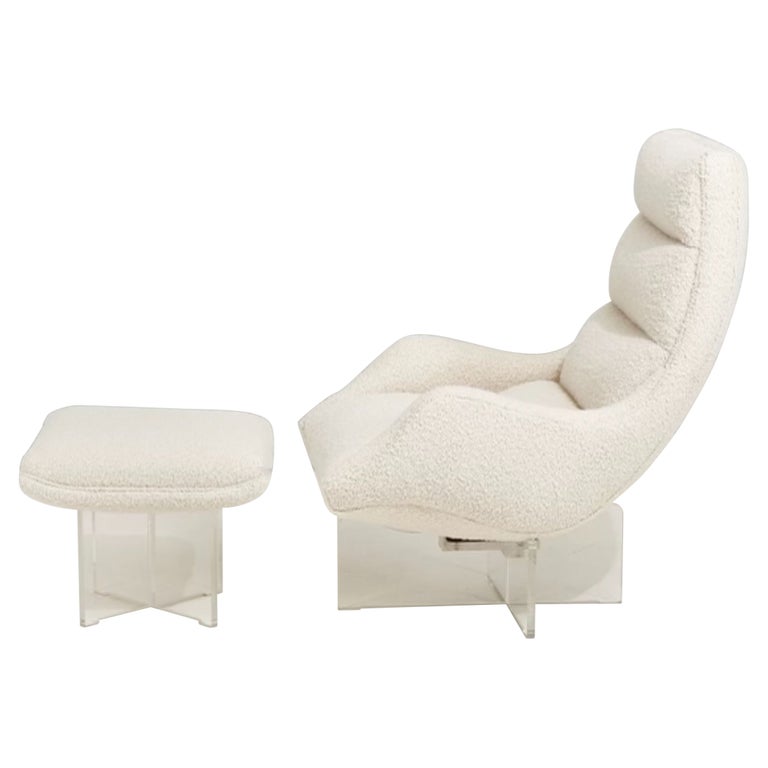 “I have this swivel lounge chair by Vladimir Kagan in my own living room. It’s not only very comfy but also has a great sex appeal.” 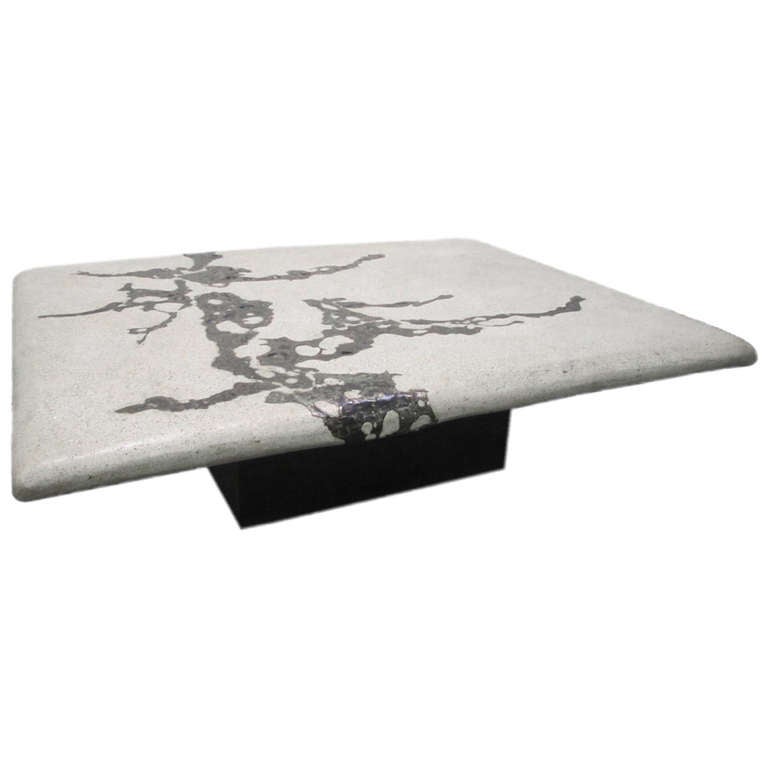 “I adore the craftsman art of Silas Seandel. He’s the only one on this planet who was — and still is, at almost 85 years old — able to treat concrete and liquid bronze in such an artisanal manner!” 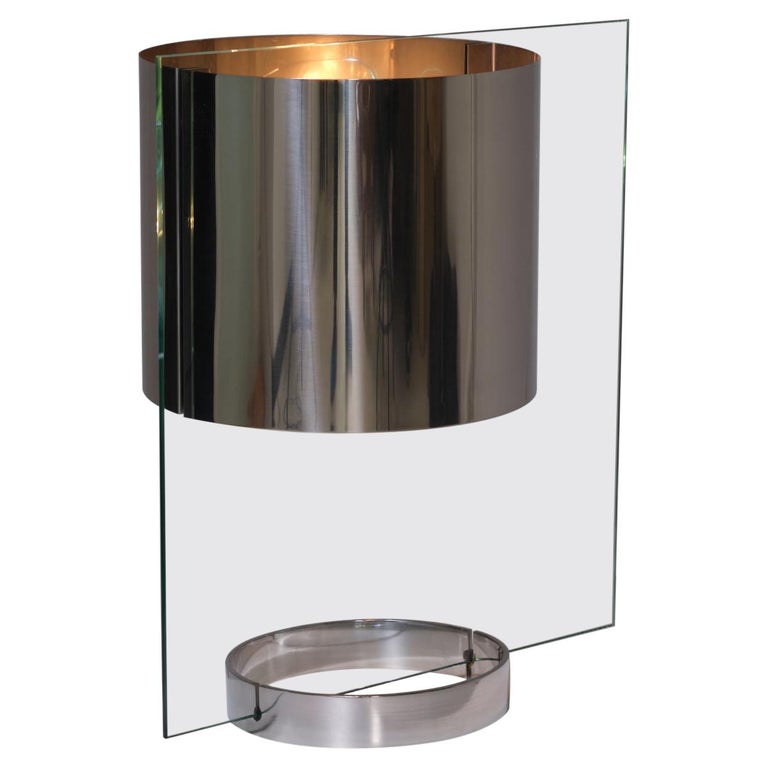 “This rare Lumenform table lamp has a great contrasting material mix but still appears so pure. It works in any sophisticated interior and adds an atmospheric glow.” 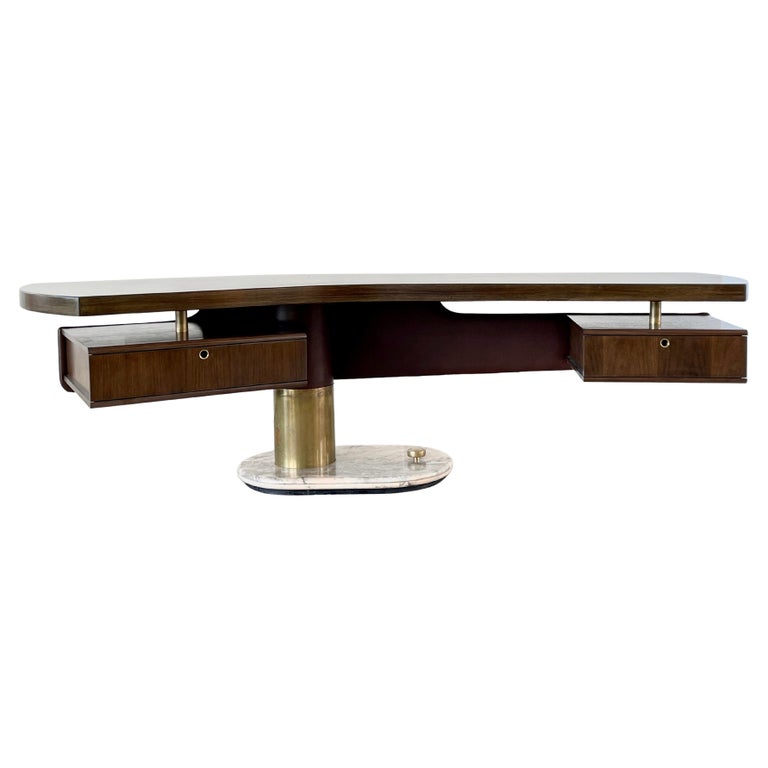 “Without any question, the coolest executive desk ever. Very sought after, but you can find it occasionally on 1stDibs.” 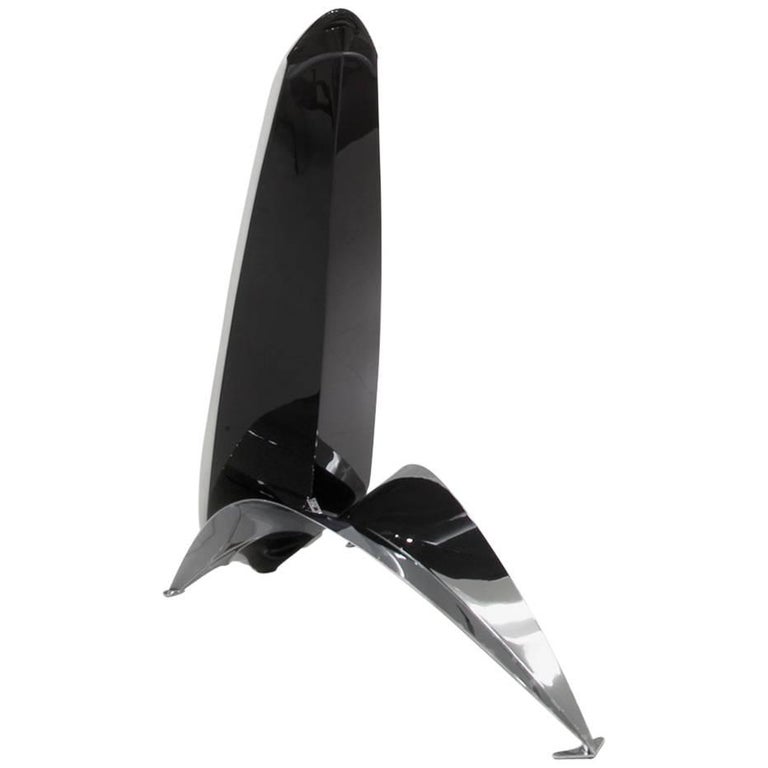 “This limited (to fifty pieces only) lounger by the celebrated architect Santiago Calatrava definitely represents the best collectible design for the future — a great investment!”