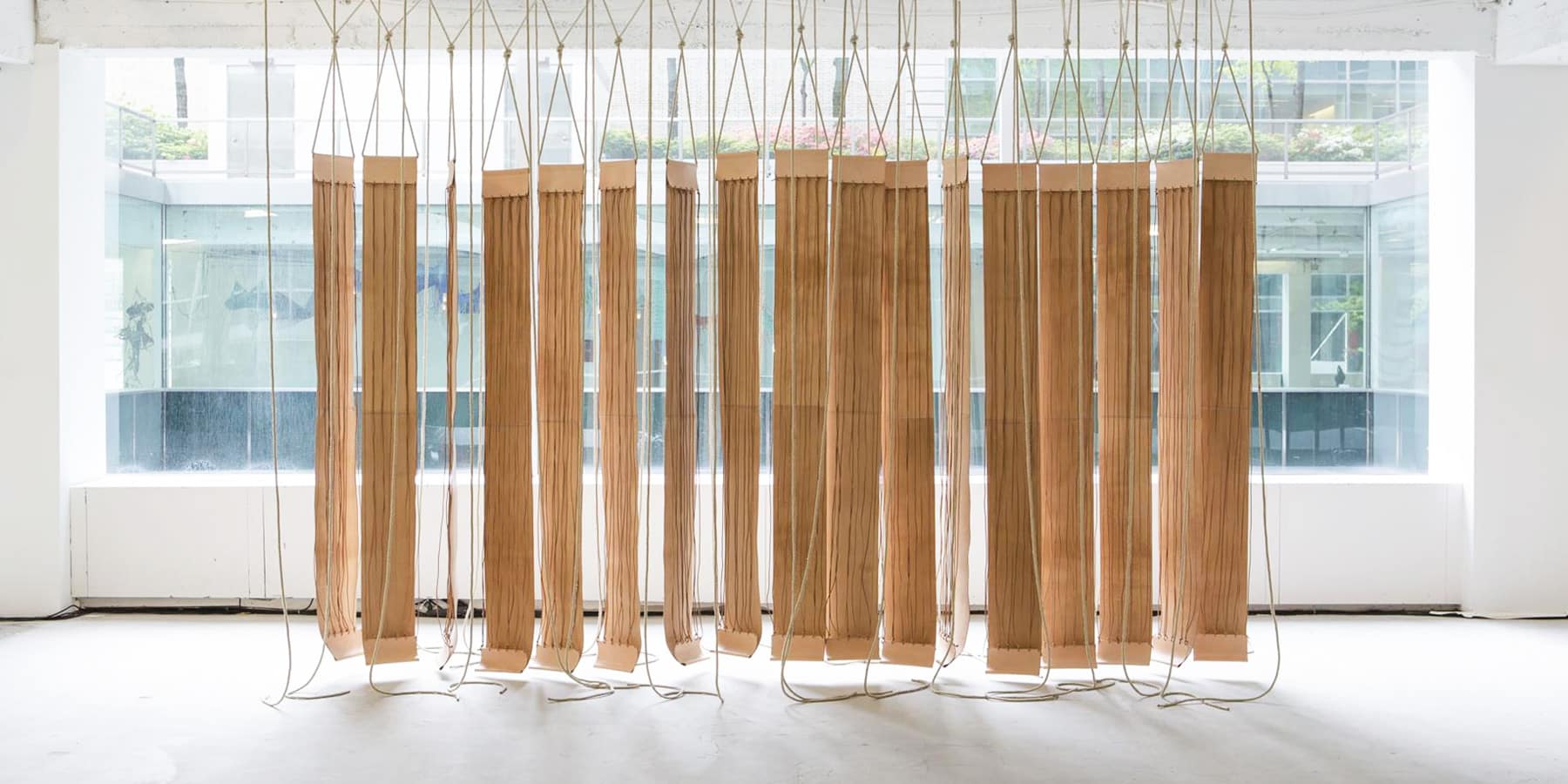 Gallerists Jeanne Greenberg Rohatyn and Paul Johnson are partnering on pop-up shows. Can this duo instill a new respect for fine design in the art world? 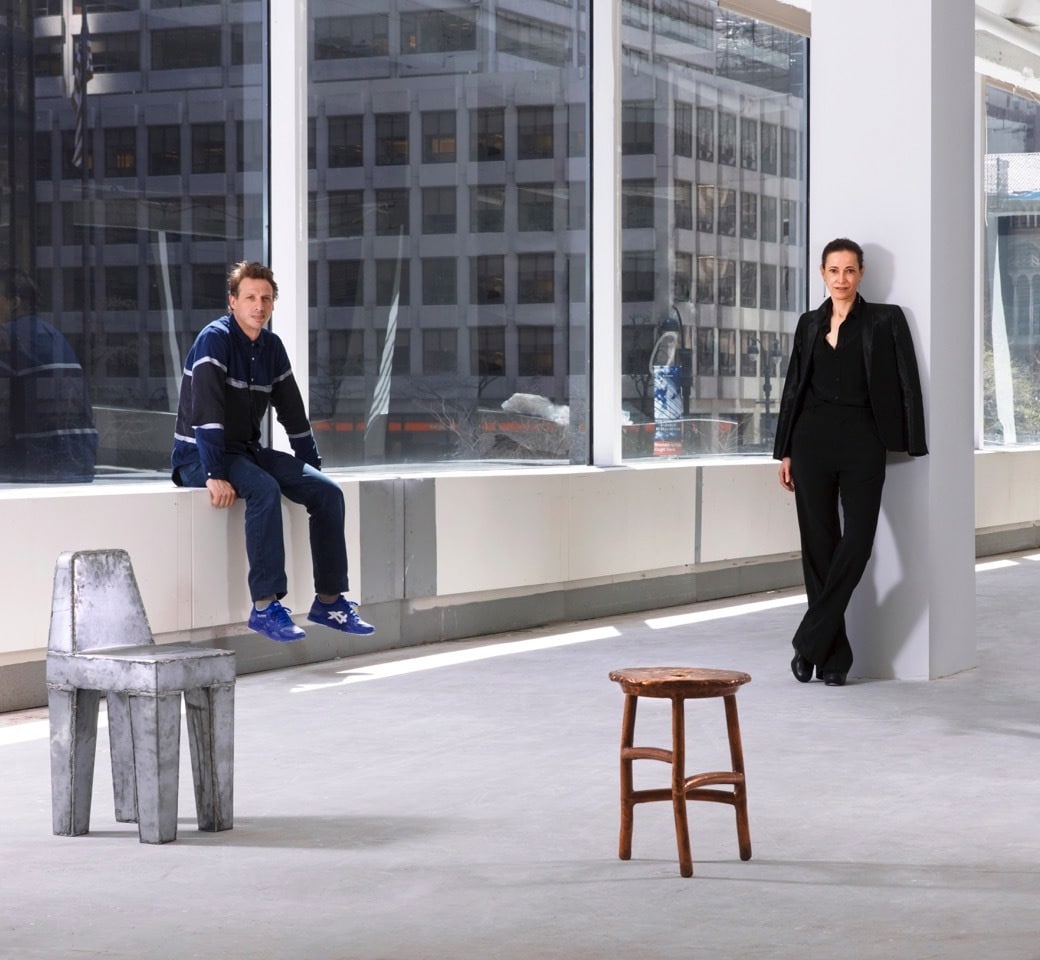 New York gallerists Jeanne Greenberg Rohatyn and Paul Johnson recently launched Salon 94 Design, a spinoff of Greenberg Rohatyn’s Salon 94 galleries that focuses on contemporary fine design. Its latest pop-up show, “Midtown,” is on view at Park Avenue’s Lever House through June 9 (photo by DBOX). Top: The exhibition includes Leonor Antunes’s A secluded and pleasant land. In this land I wish to dwell, 2014. All images courtesy of Salon 94 and Maccarone Gallery unless otherwise noted.

Anyone who has followed the career of Jeanne Greenberg Rohatyn, the founder of New York’s Salon 94, knows of her strong interest in design. Her first gallery, opened in 2002, was an appointment-only space on the ground floor of her Rafael Viñoly–renovated East 94th Street townhouse where she showed artist-designers like Paula Hayes and Carlo Mollino alongside so-called “pure” artists like Marilyn Minter and Wangechi Mutu. After opening two more traditional galleries on the Lower East Side — Salon 94 Bowery and Salon 94 Freemans — Greenberg Rohatyn continued adding designers like Rick Owens and Martino Gamper to her program.

Now, Greenberg Rohatyn has gone one step further, partnering with the vintage and contemporary blue-chip design dealer Paul Johnson to found Salon 94 Design. Johnson will continue selling vintage work through his Johnson Trading Gallery, but his contemporary stable, including the London star Max Lamb and the Seoul designer Kwangho Lee, has been folded into the new venture, which he will direct.

“When I made the decision to be more aggressively involved in the design business,” Greenberg Rohatyn says, “it was clear that I needed a seasoned partner. I asked Paul how he felt about trying out a project, and he immediately took the ball and ran with it. It went from there.”

Greenberg Rohatyn and Johnson tested the waters by collaborating last December on a Design Miami booth dedicated to the work of Italian legend Gaetano Pesce. They launched their partnership officially in March with a Salon 94 Bowery show called “Ghost Dog” after Jim Jarmusch’s 1999 cult samurai film. Assembled with a handmade, DIY aesthetic, it offered pieces by Pesce and Lee, as well as newer talents like the Brooklyn-based Thomas Barger, who contributed blobby paper-pulp armoires. “We’ve been amazed by the art world people who’ve been attracted to them,” says Johnson. “We’ve sold a lot.”

Their second official outing is “Midtown,” on view at Lever House through June 9. A collaboration with the West Village Maccarone gallery, the show fills 34,000 square feet of raw space on the mid-century skyscraper’s second floor, mixing vintage and contemporary design with artworks by the likes of Huma Bhabha, Carol Bove and Urs Fischer. More pop-up shows are planned throughout the year.

Greenberg Rohatyn and Johnson recently spoke with Introspective about their new gallery’s origins and their plans for what comes next. 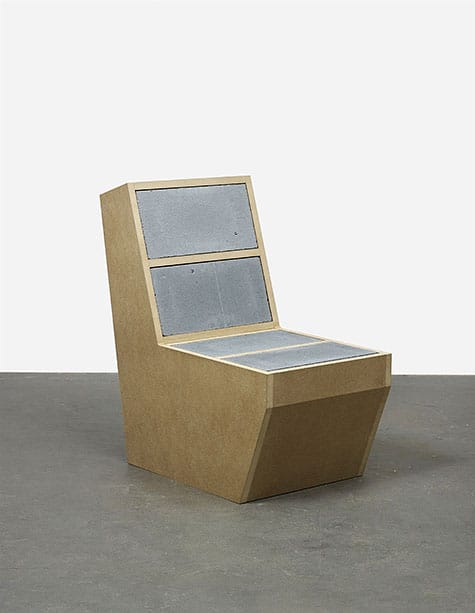 What prompted your partnership?

Paul Johnson: I’ve known Jeanne for a long time, and I always thought it was interesting that her art gallery had a real design program. Then a mutual client, Sandy Rower [grandson of sculptor Alexander Calder and chairman and president of the Calder Foundation], suggested we merge. The opportunity to show Gaetano Pesce fell into our laps. We organized the Miami show, and that solidified everything.

What did you learn by working on that show?

Jeanne Greenberg Rohatyn: It allowed us to see each other’s strengths. Paul is very talented in terms of getting things from the studio to the gallery. A lot of troubleshooting takes place between those two spaces, because things in the studio sometimes don’t have the right finishes or armature or pedestal — whatever it is that helps them look so good in the gallery.

PJ: Jeanne’s strength is presentation. To see her come in and put a booth together at a design fair, after so many years of doing art fairs, was fantastic.

JGR: When we created the booth and installed it together, we knew that there was an energy that was vital and fresh and that we were adding something new to the design dialogue. 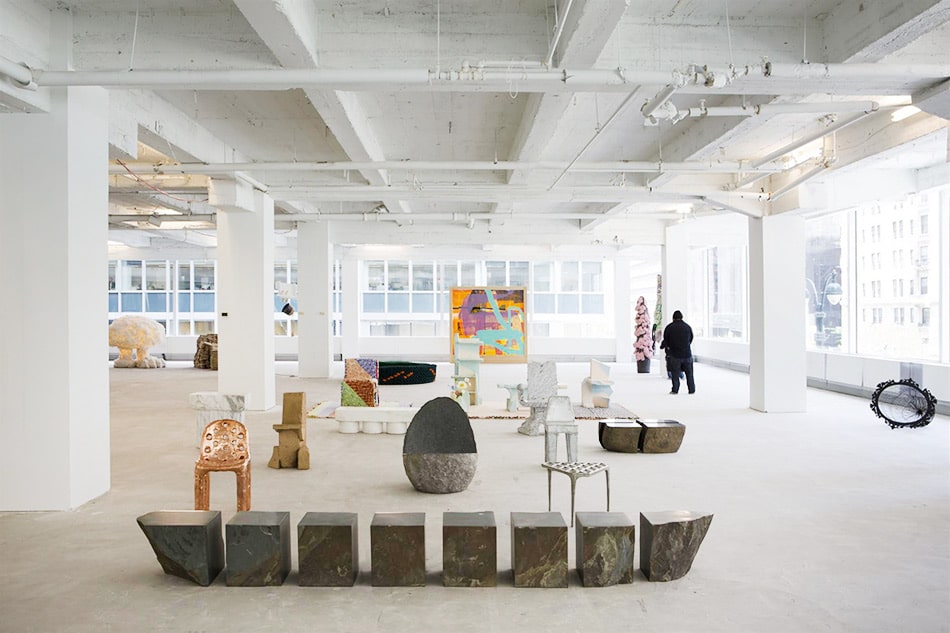 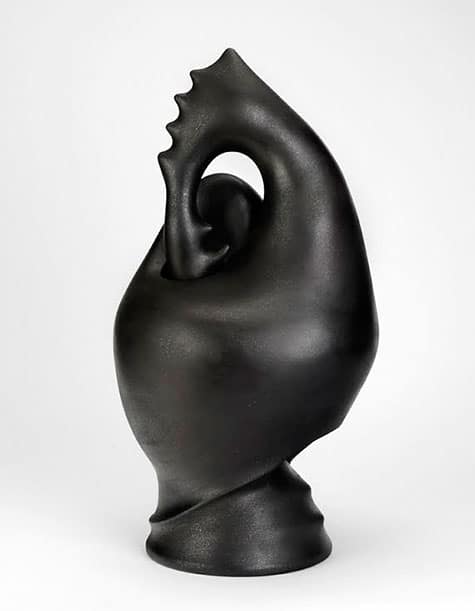 Christine Nofchissey McHorse’s Robster Claw, 2016, has a sensibility both whimsical and sinister.

What sort of designers are you looking for?

PJ: Function always is the big thing in design. Even if you can’t use a piece, it should have this possibility. We like the people we represent to identify themselves as designers. But it can also mean artists who want to do projects that they identify as design, like Donald Judd. We’re now searching for others who might have fallen through the cracks, looking for more obscure examples, like Vito Acconci.

JGR: What’s interesting to me is when a furniture designer or an industrial designer makes something that is elevated to high art. I’m interested in those magic hands.

Are you focusing more on vintage or new work?

JGR: There are many people navigating the vintage industry, but we both have a passion for new design. And there aren’t so many design galleries promoting and nurturing the work of new designers, so we see an opportunity.

What was the inspiration for the “Midtown” exhibition, and how are you using it to showcase your program?

JGR: Paul and I wanted to do a design and art show for Frieze, but this can’t happen at art fairs because they have been divided into the two categories. I happened to meet with Michele Maccarone, and she mentioned the Lever House space. Within days, we were signed up to do something there. The show is based on this idea of Midtown being a space for good modernist design.

PJ: In addition to work by Gaetano, we have a lighting installation by Kwangho Lee and a Max Lamb retrospective. I’ve pulled together the best and largest examples of Lamb’s seating, work that other spaces could never accommodate. I’m also using the show to launch multiple new artists. Thomas Barger will be back. Jay Sae Jung Oh, who was in the “Ghost Dog” show, has made a new light with a shade of vacuum-formed leather. I’m also showing Dozie Kanu, a young Houston designer who has been building stages for a famous hip-hop artist, Travis Scott. It’s a good chance to get him exposure. 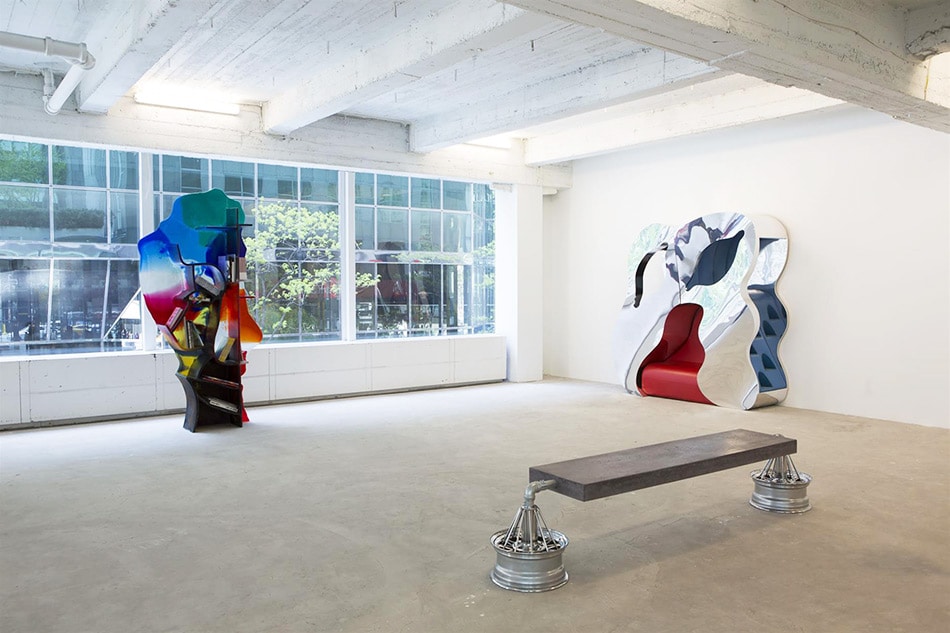 Left: In addition to pieces by emerging names, the gallerists are showing design work by creators better known as fine artists, such as Vito Acconci, whose Stretched Facade, 1984, sits against the wall. In front of the windows stands Gaetano Pesce‘s Palladio Cabinet, 2007, while Dozie Kanu’s Bench on 84s, 2017, is in the foreground.

Jeanne, you’ve spent years exploring the line between art and design. Where do you stand on it now?

JGR: The art world has hierarchies that have been there for centuries, between painting and sculpture, between tapestries and objects and finery. I’m always interested in what happens when you take a tapestry that was on a floor and put it on a wall. How does the value change, ideologically and commercially? Whenever you start looking at something like that, the hierarchies get destroyed. It’s that destruction that interests me.