Sara Bengur’s Lively Interiors Are a Kaleidoscopic Mix of Color, Texture and Culture 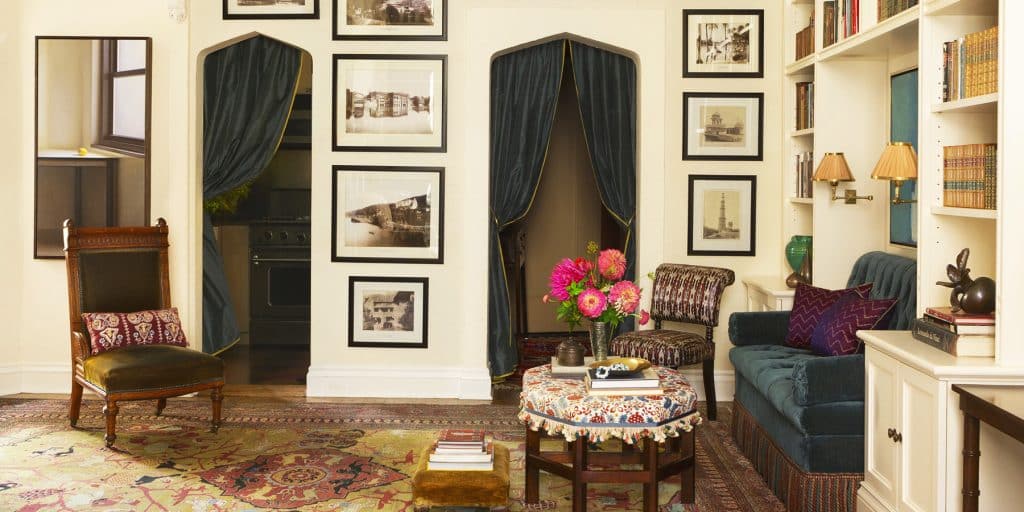 The designer mingles colors, patterns and global cultures in interiors with a rhyme and reason all their own. 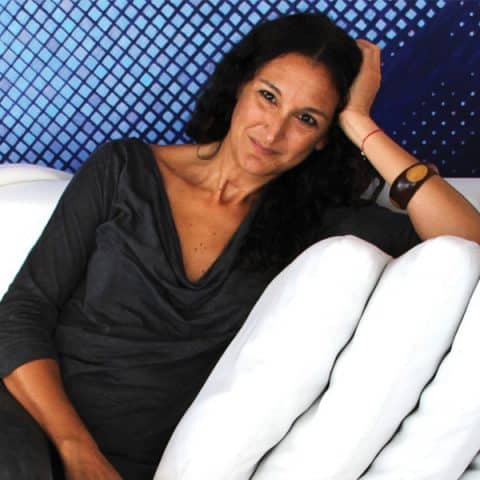 March 17, 2019Sara Bengur grew up traveling the world. The global sensibility she developed informs her design work, in which she mixes colors and patterns, eras and styles to craft interiors that feel layered and collected (portrait courtesy of Sara Bengur). Top: For this New York apartment, Bengur wanted to highlight the photographs the clients amassed while living in India and to create a space that was eclectic but a bit old world in style (photo by Rachel Robshaw).

Traveling — it leaves you speechless, then makes you a storyteller,” the 14th-century Moroccan scholar Ibn Battuta wrote in chronicling his extensive  journeys throughout the Muslim world. If he had a contemporary soulmate, it would be designer Sara Bengur. Having led a peripatetic existence since childhood, she’s often found herself awed into silence by the world’s infinite wonders. Yet these experiences have given her a talent for telling stories, which she narrates through the colorful, richly layered environments she conjures for her clients.

“I enjoy all the chaos, smells and colors of Morocco, India, Turkey, Brazil,” says the tall, black-eyed Bengur, sitting in her Chelsea office, on whose white walls hang an ornate Persian miniature, a brass Moroccan mirror, bright modern art created by friends who share her love of color and plates that she designed, inspired by antique ottoman coins. “There’s a fire and energy in those places, an emotion and expressiveness that just feeds me.” This vibrancy, she points out, is somewhat like life itself: a bit messy and uncontrollable. “Nothing’s hidden — it’s all out there. There’s a kind of freedom and aliveness in that.” 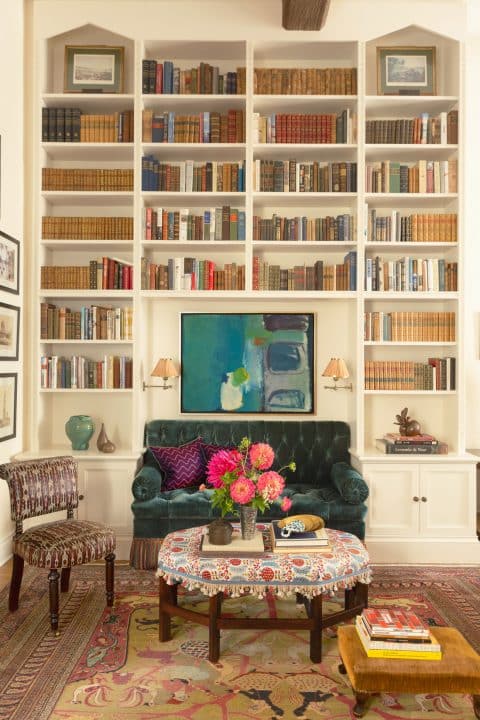 The homeowners asked for tall bookcases to house the husband’s antique books. Bengur designed the reading nook and custom sofa, which is upholstered in a rich Claremont linen-velvet fabric. Photo by Rachel Robshaw

Bengur has brought her well-traveled eye to many decidedly domestic locales, from Manhattan high-rise apartments to homes in rural Connecticut. She has furnished an Upstate New York log cabin with ethnic textiles and stenciled stylized paisleys onto the walls of a Hamptons bedroom decked in folkloric embroideries. Her work has attracted a loyal clientele that includes “entertainment types and actors,” she says, and, more broadly, anyone who appreciates a globally inflected bohemian eclecticism.

Born to Turkish parents in Washington, D.C., where her father worked for the International Monetary Fund, Bengur found her earliest friends among families from many countries and cultures. When she was seven, her father retired from the IMF and moved the family to Istanbul. Jolted by the resulting culture shock, she quickly learned Turkish, so she could attend a local school. The next seven years were spent traveling throughout Europe and summering at the family home on Mount Desert Island, in Maine. “My father was a tremendously aesthetic man,” she remembers. “He would take me to museums and historic houses, and he was very good with color in the way he dressed.” Bengur recalls shopping for ties with him, mesmerized by the hues and patterns, and touring the Van Gogh Museum, in Amsterdam, as he explained each painting. “Those colors! It’s such an imprint,” she says. “Color just feels like second nature to me.” 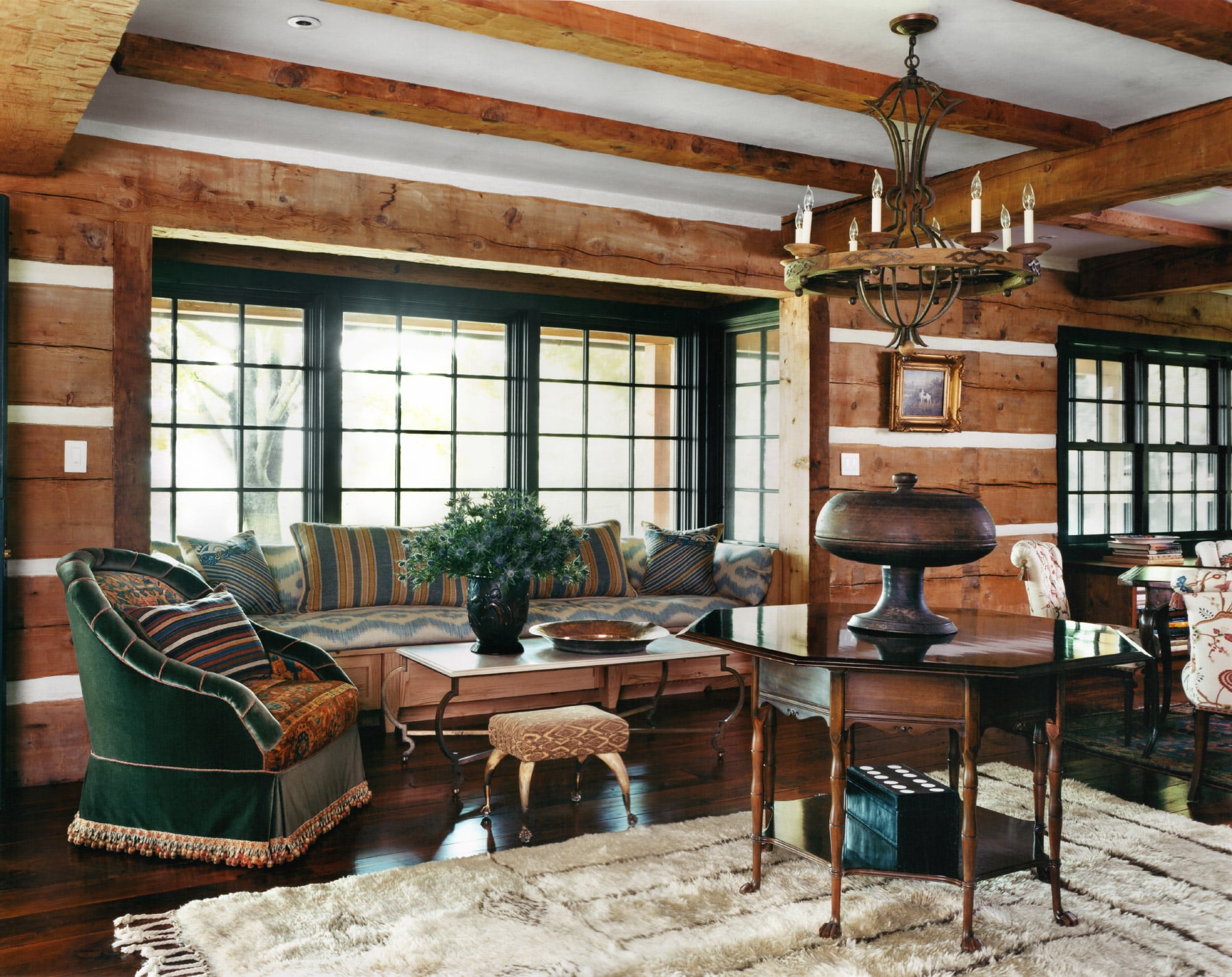 In this Millbrook, New York, lodge, Bengur aimed for a soothing environment, working with the wood tones and incorporating lots of antique textiles. The center table is a 19th-century Arts and Crafts piece from England. Photo by Raimund Koch

The family left Turkey in 1979 — the government had begun restricting travel, and her father feared being cut off from her three siblings, who lived in the U.S. So, Bengur had to adapt to another culture, this time that of their Maine home. “I was fourteen,” she says. “I was still wearing knee socks, and I had classmates who were on birth control!” She took refuge in the piano. Following high school, Bengur enrolled at Colby College, where she earned a Bachelor’s degree in economics (“a tribute to my father”). She spent her junior year at the University of Sussex, in England, and, upon graduating, moved to London to work as a training stock broker in Mayfair. 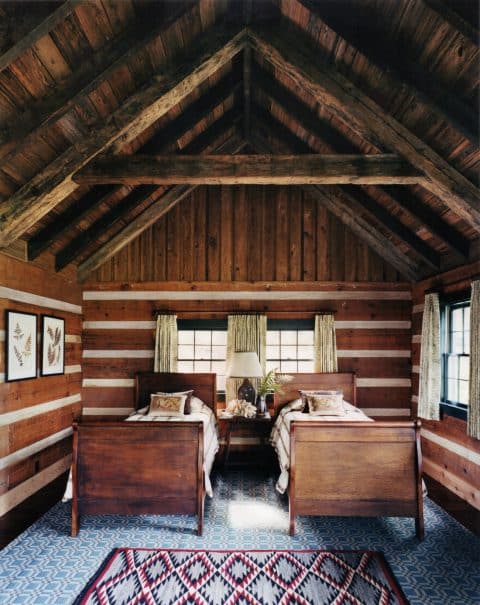 In this guest bedroom, Bengur deployed a pair of French sleigh beds and layered a Navajo rug over the patterned carpet. Photo by Raimund Koch

After a year, Bengur relocated to New York but soon wearied of the world of finance. “I wasn’t happy on Wall Street,” she says. So, she enrolled at Parson’s and got an interior design degree. She was hired by Stephen Sills, who immediately gave her a complex classic seven on Fifth Avenue to oversee. “It was a baptism by fire,” Bengur says of the high-pressure assignment. She went off on her own in 1993, just as her former London colleagues were migrating to New York. “That became the primary source of work for the first years,” she recalls.

From the beginning, the firm’s interiors have mirrored Bengur’s background: Resolutely international and aesthetically wide-ranging, they encompass an eloquent salmagundi of cultures, eras and styles that feels like the product of years of world travel. In her own salmon-painted living room, in New York’s Chelsea, she spans the globe, pulling together a Danish modern chair, a comfortably slipcovered sofa scattered with pillows in a riot of vintage ethnic textiles, 19th-century-style Moroccan folding chairs with mother-of-pearl inlay, contemporary art, kilims, a vaguely Deco console, a mosaic table flanked by armchairs draped in a Central Asian suzani textile and Indian silk and a grouping of Turkish tiles. 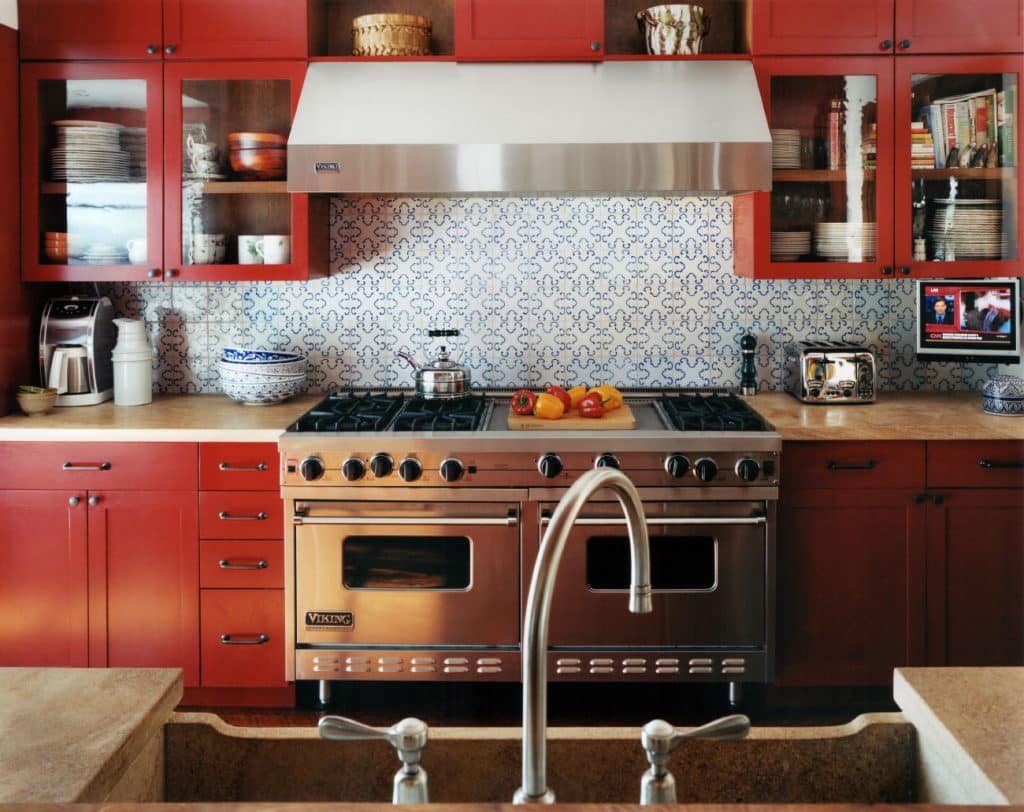 The owner of a Millbrook, New York, home wanted the kitchen to “feel like a jewel box.” Bengur says they had fun “choosing the perfect red” for the cabinets and pairing it with antique tile for the backsplash. Photo by Raimund Koch 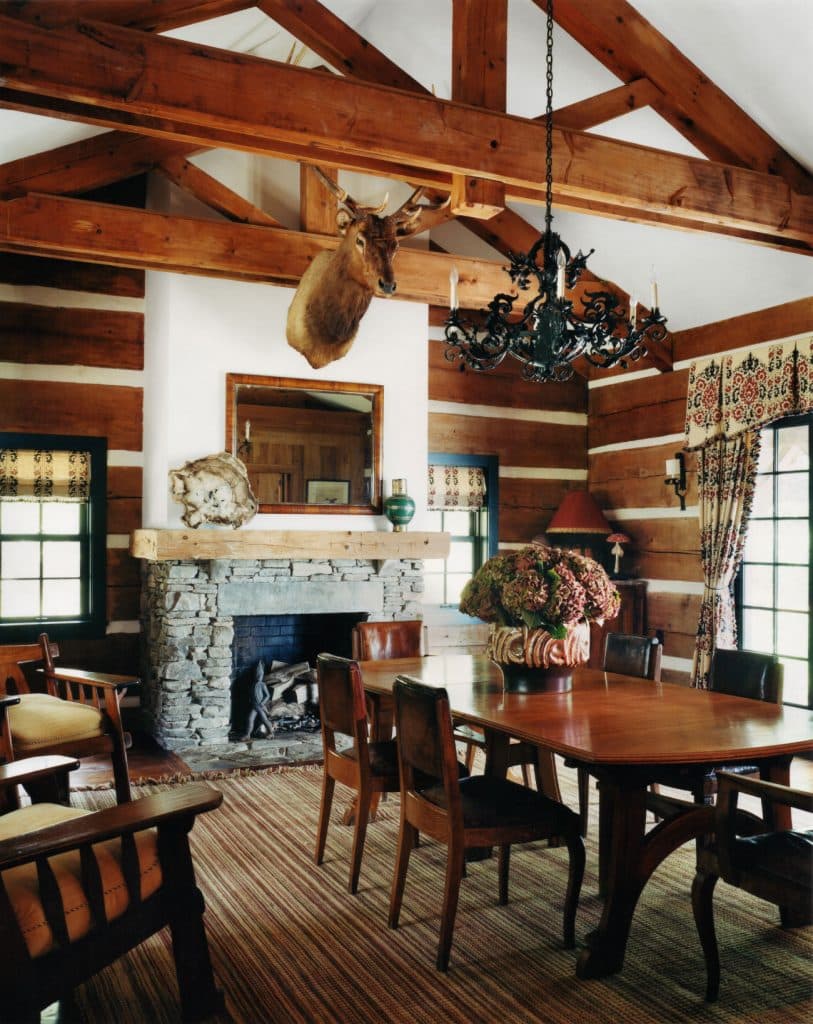 In the dining room, Bengur mounted an Italian Art Nouveau chandelier above the ca. 1897 oak table by Gustave Serrurier-Bovy. Photo by Raimund Koch 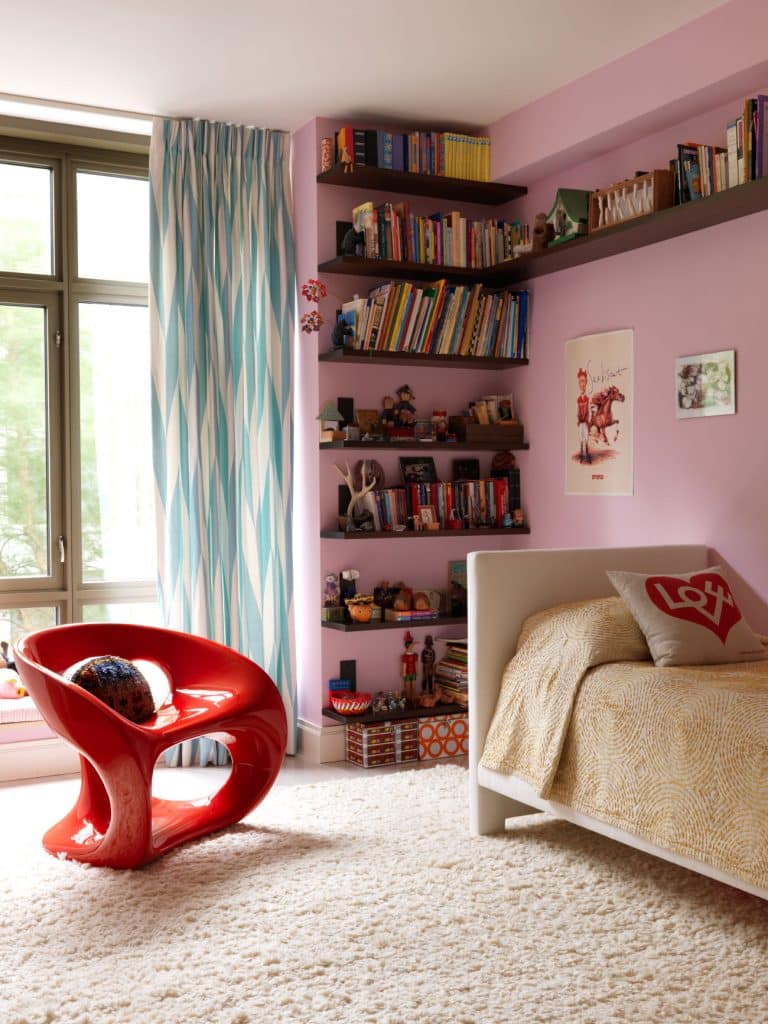 The daughter of the owner of a Manhattan apartment asked for a pink room, which Bengur furnished with a bright red Giorgio Gurioli chair and a yellow John Robshaw bed cover. Photo by Jonny Valiant 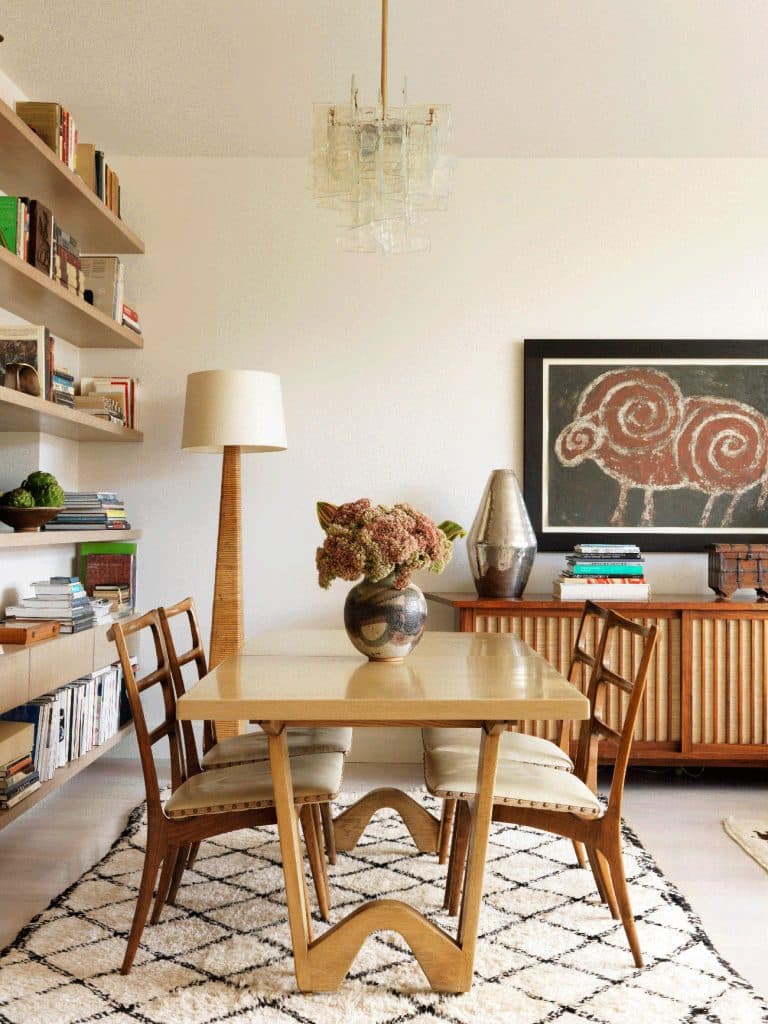 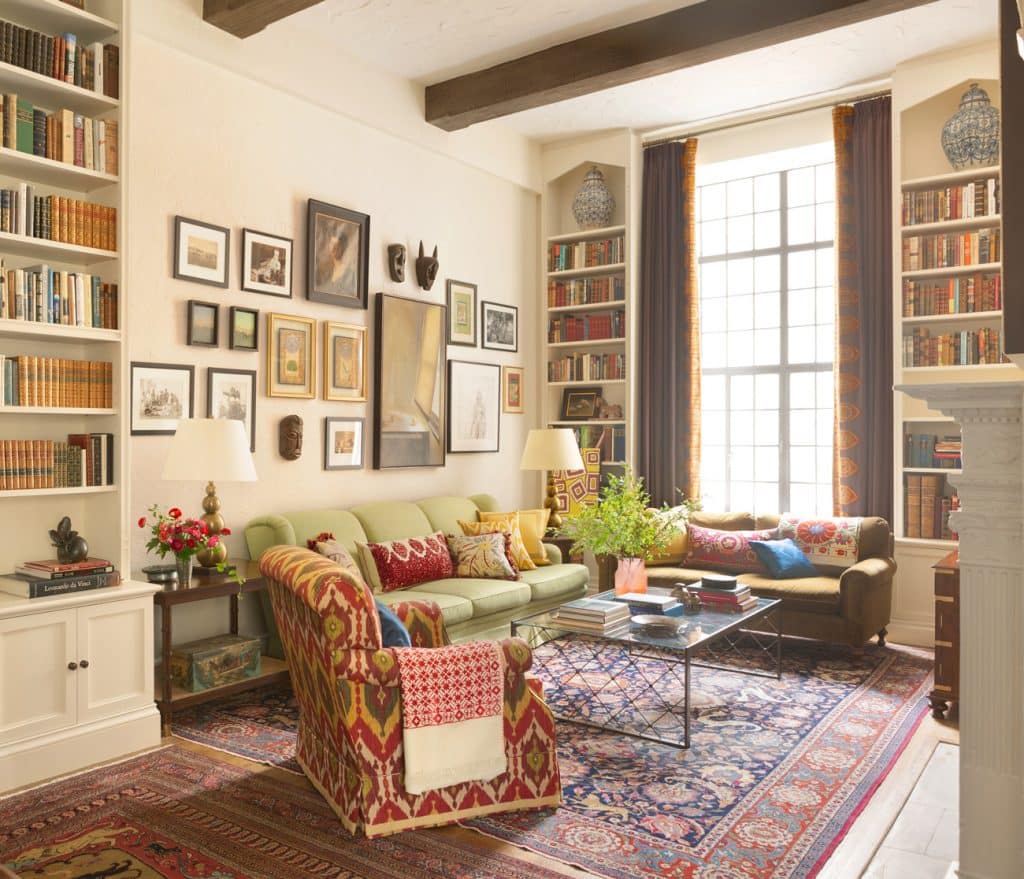 The starting point for designing this room in another New York apartment was helping the clients choose the Persian rugs, which set the tone for the space. Bengur had the drapes made, incorporating a trim the clients had brought back from India, and showcased the couple’s art collection. Photo by Rachel Robshaw 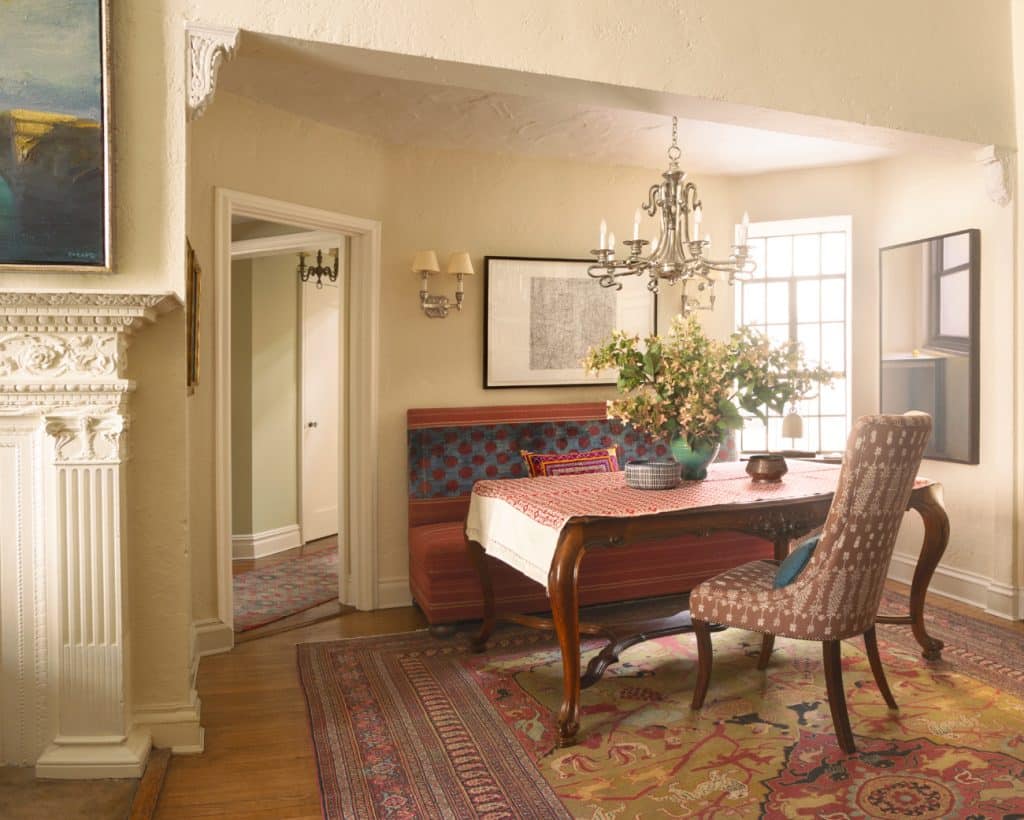 Bengur envisioned this as both a dining room and a work space. A French Art Nouveau chandelier hangs over the mid-century Anglo-Indian-style table in Brazilian rosewood. Photo by Rachel Robshaw 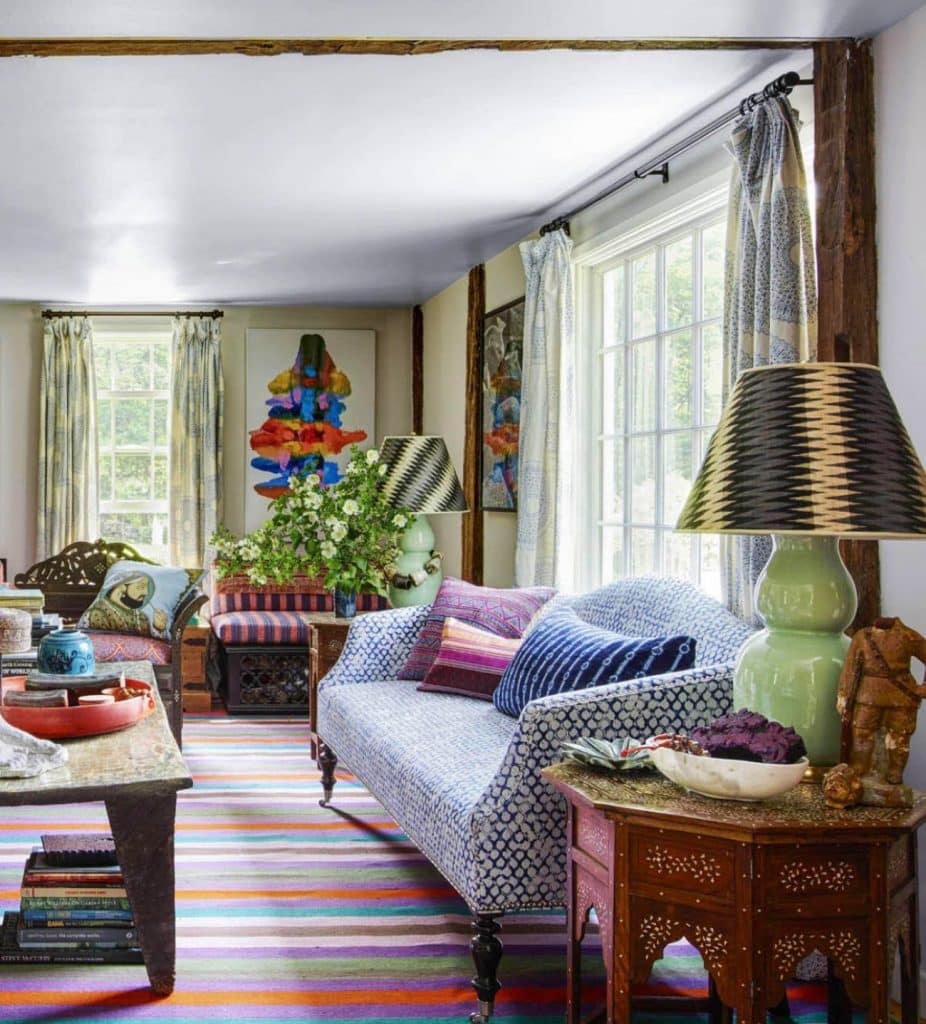 “It’s fun to work with him,” Bengur says of collaborating with textile designer John Robshaw, for whom she designed a home in Connecticut. “With him, it’s about editing and finding the best combo of his fabrics.” The living room features custom rugs they had made in India and furniture upholstered in Robshaw’s textiles. Photo by Richard Powers 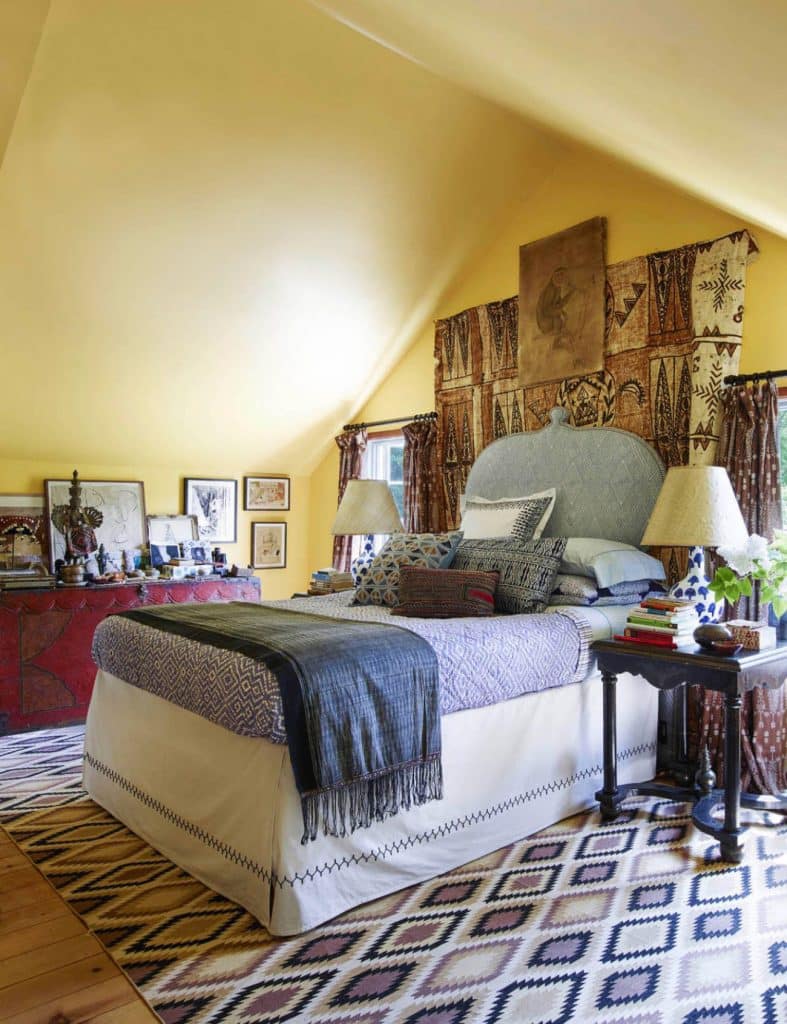 A wall hanging that Robshaw acquired during his travels is mounted behind a headboard of his design. Photo by Richard Powers

Bengur’s style is surprisingly adaptable to a number of environments. One might think, for instance, that this kind of layering would not be particularly appropriate for an Upper East Side apartment referencing traditional architectural detailing: Gothic arched doorways, an ornate neoclassical fireplace, stepped moldings, acanthus corbels. But the homeowners, says Bengur, “are big travelers and collect art and objects from each country they visit,” and they wanted that reflected in their interiors. She started with some traditional Continental pieces that spoke to the architectural envelope, such as a tufted green-velvet sofa with a long bullion fringe, a Jean Royère–style coffee table and traditional carpets. Then, she brought in vintage photography of Indian locales, ethnic textiles and a jewel-toned palette — garnet red, tourmaline green, sapphire blue, amethyst — all of which infused the interiors with the requisite sense of wanderlust. 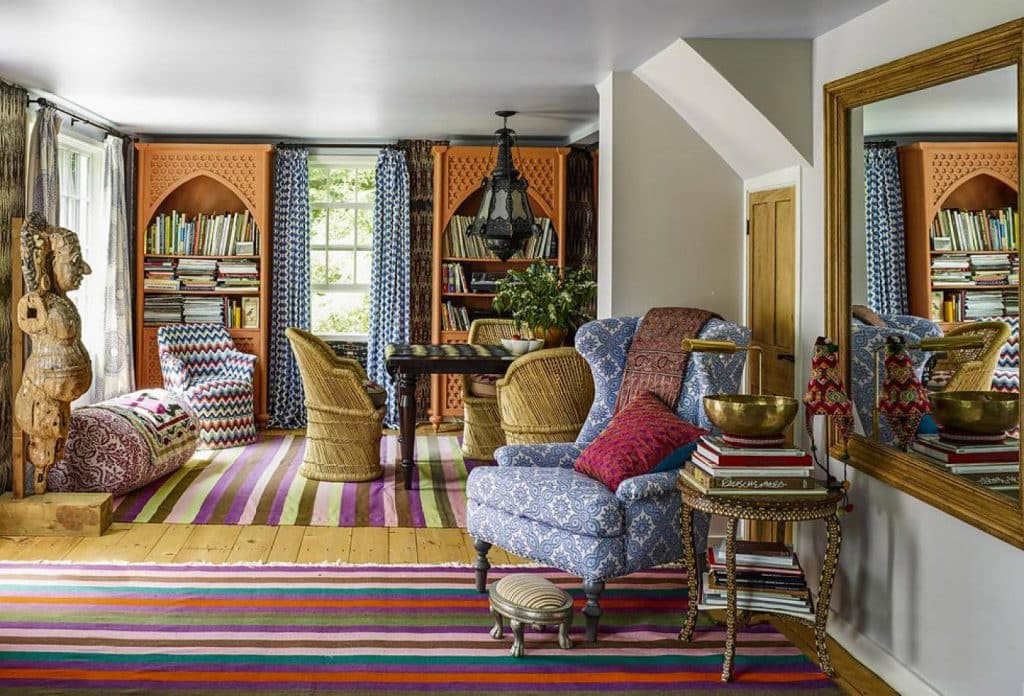 The dining room of designer John Robshaw’s Connecticut house features a pair of bookshelves he purchased in India, which he and Bengur painted, plus furniture upholstered in textiles he created. The lantern above the table is another find from India, and the statue is from Sri Lanka. Photo by Richard Powers 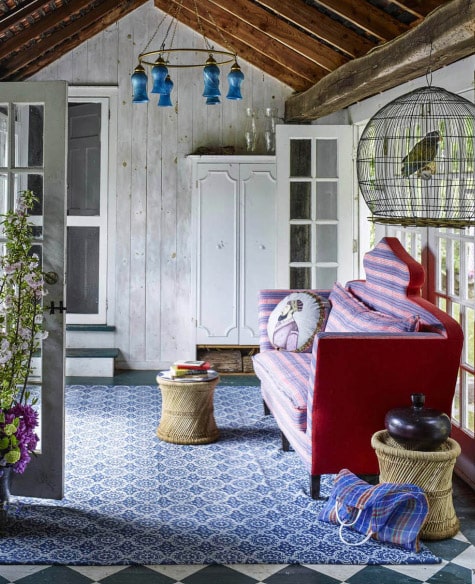 Robshaw wanted to turn his entryway into another sitting room, so Bengur furnished it with a settee and rug of his design. The pet bird belongs to his wife, Rachel. Photo by Richard Powers

Indeed, the use of color and ethnic textiles, often antique, is a thread running throughout Bengur’s work. Even in a Greenwich Village apartment that skews mid-century modern and monochromatic (predominantly browns and grays), African and Asian fabrics cover toss pillows and Moroccan rugs warm the floors. By accenting a refined European sofa with an ethnic textile, says Bengur, “it becomes timeless. It adds so much depth and an instant story. It’s in the ancient nature of these fabrics and their detail. The way thread used to be dyed and embroidered is rarely done any more.”

Regarding her palette, she explains, “Color can be zen. My colors are natural and grounded. And the more you use, the more relaxing it is, because they balance each other out.” These two signatures — color and textiles — made her collaboration with John Robshaw on his Connecticut home an ideal match. Robshaw has spent his life finding, designing and importing exquisite Asian textiles. His and Bengur’s passions converged in a residence that boasts a lavender mantelpiece, terracotta-colored bookcases, a blue and red kitchen and patterns — stripes, batiks, paisleys, earthy mud cloths — everywhere.

“I strive for authenticity,” says Bengur. “It’s my responsibility to my clients. You have to let go of ego. It’s almost like they’re doing soul-searching themselves about what they want their space to be.” She is there to unearth their narrative and bring it to full expression. Often, she notes, “there’s a deeper knowing that comes to the fore that even surprises them.” 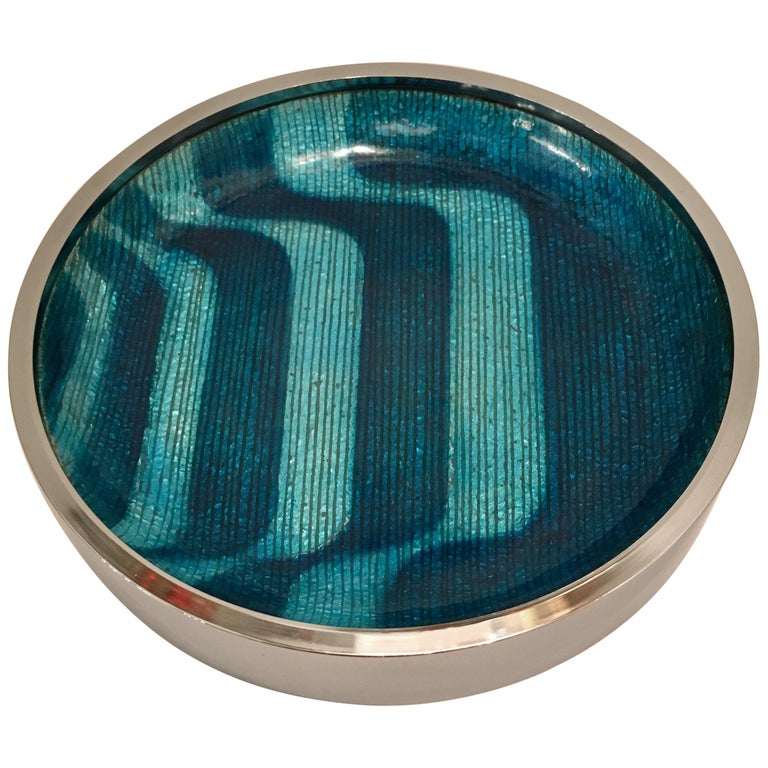 “I have a weakness for anything enamel! The turquoise colors and design make my heart sing.” 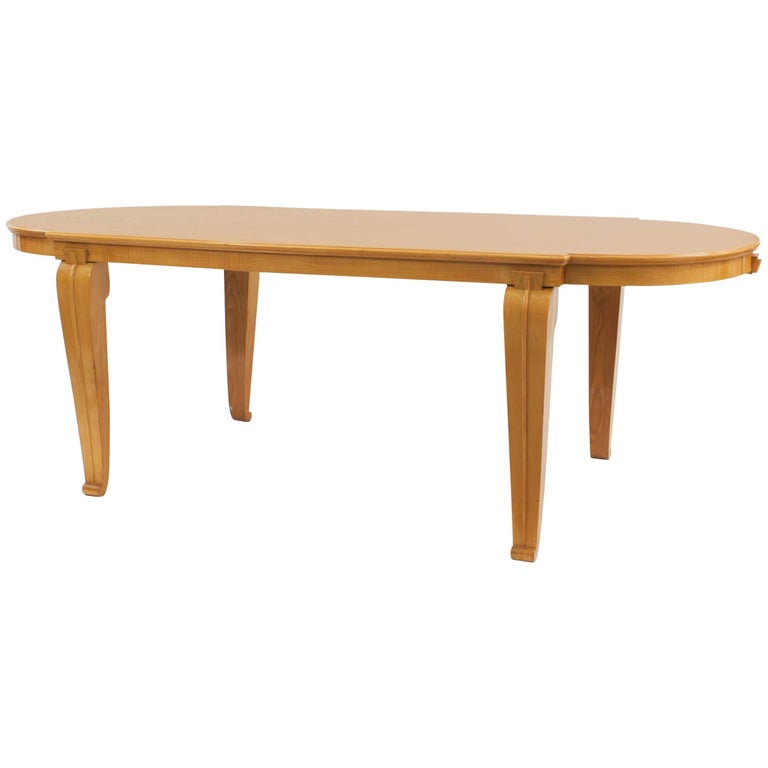 “André Arbus’s table is truly a collector’s item. Any home would be lucky to have this chic and timeless design in its dining room.” 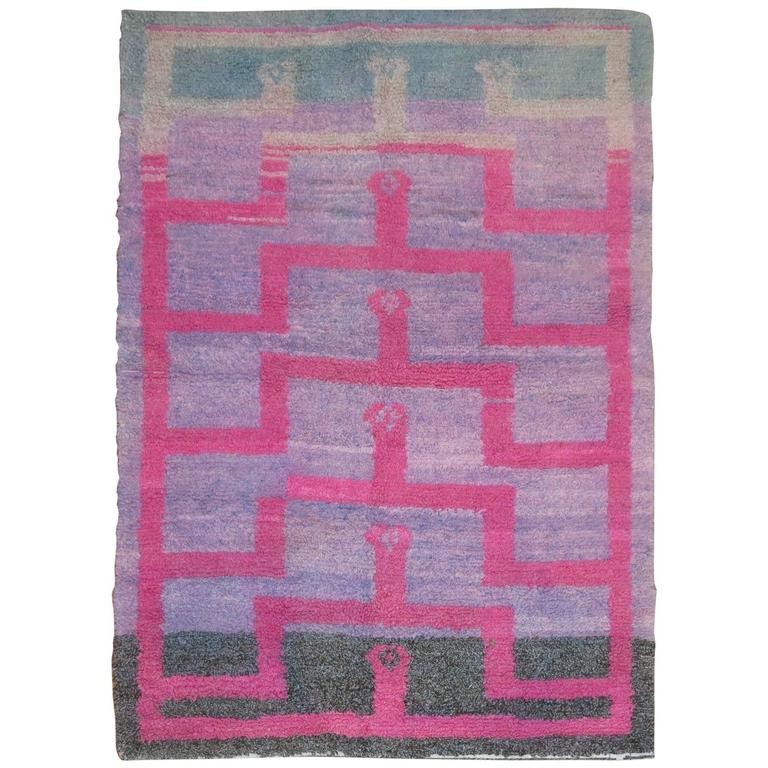 “I adore Tulu carpets from Turkey and have never seen one with this coloration — very unique. I also love the gradation of color.” 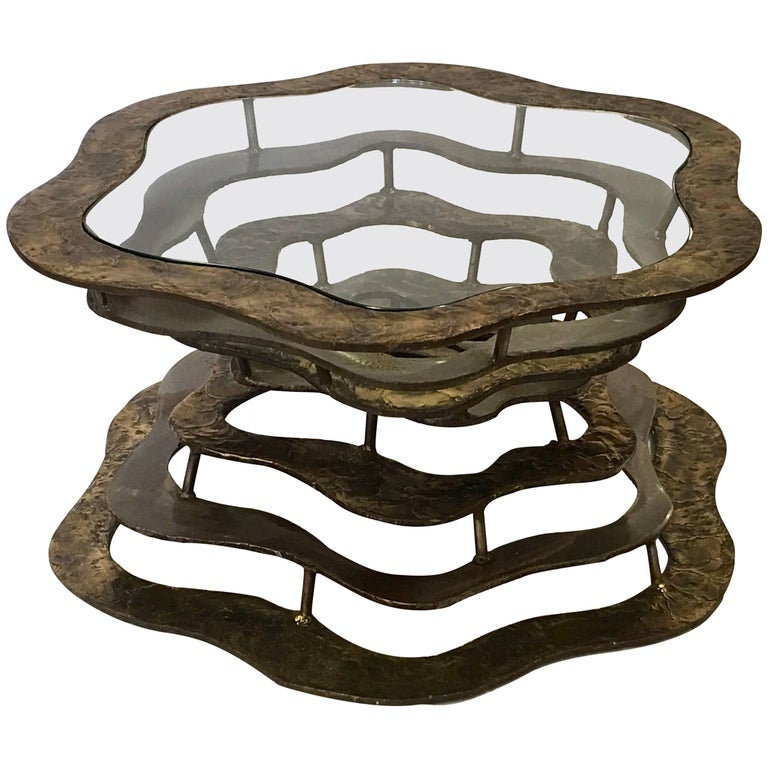 “Silas Seandel’s Volcano coffee table is actually more of an art piece, its organic forms are so pleasing to the eye. It would make any room feel expansive yet grounded at the same time.” 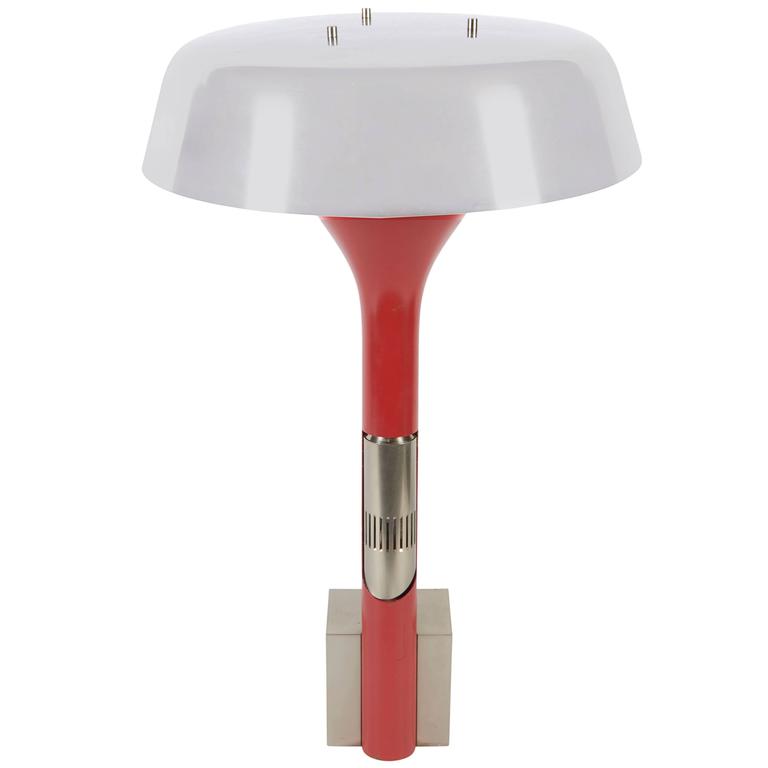 “This lamp would be a great punctuation to any desk — it is a beautiful combination of materials, and the color is so unexpected.” 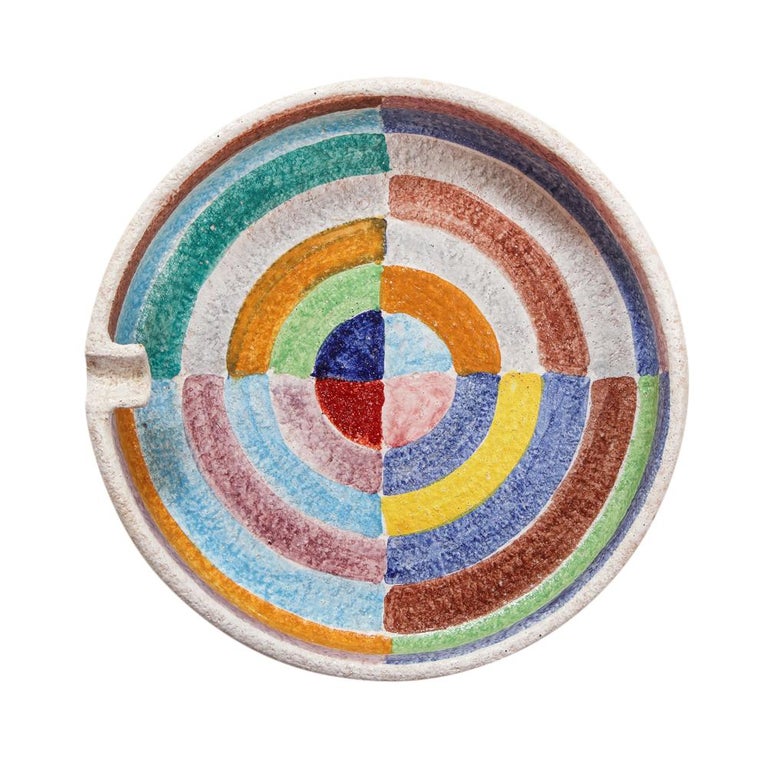 “This ceramic piece reminds me of the work of Sonia Delaunay, one of my favorite artists. Such great form and a perfect accent for any room.” 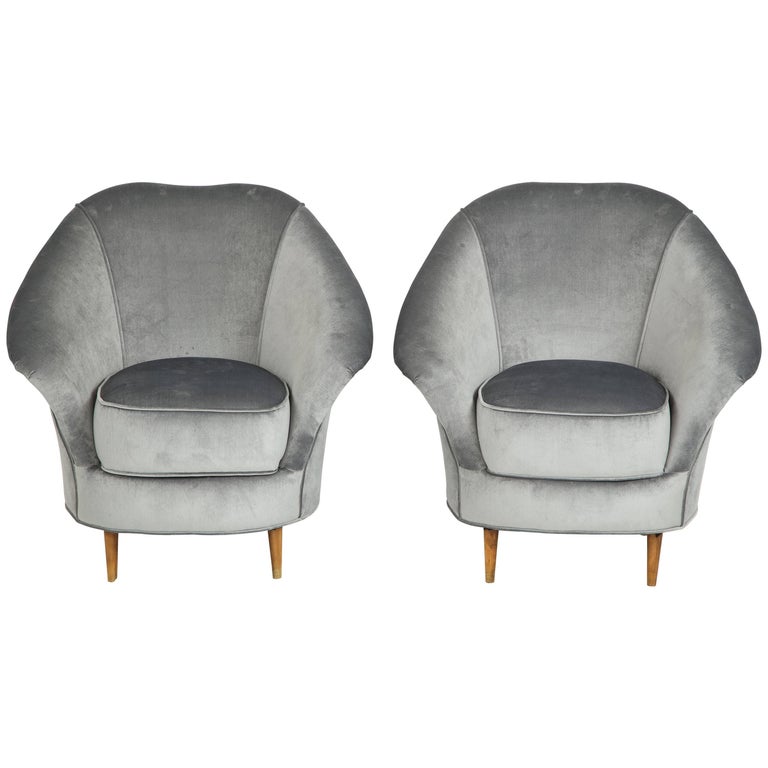 “I love Giò Ponti chairs. He always gets the scale just right, and the forms are so elegant. Of course, I would love to see these two upholstered in more of a canary yellow!” 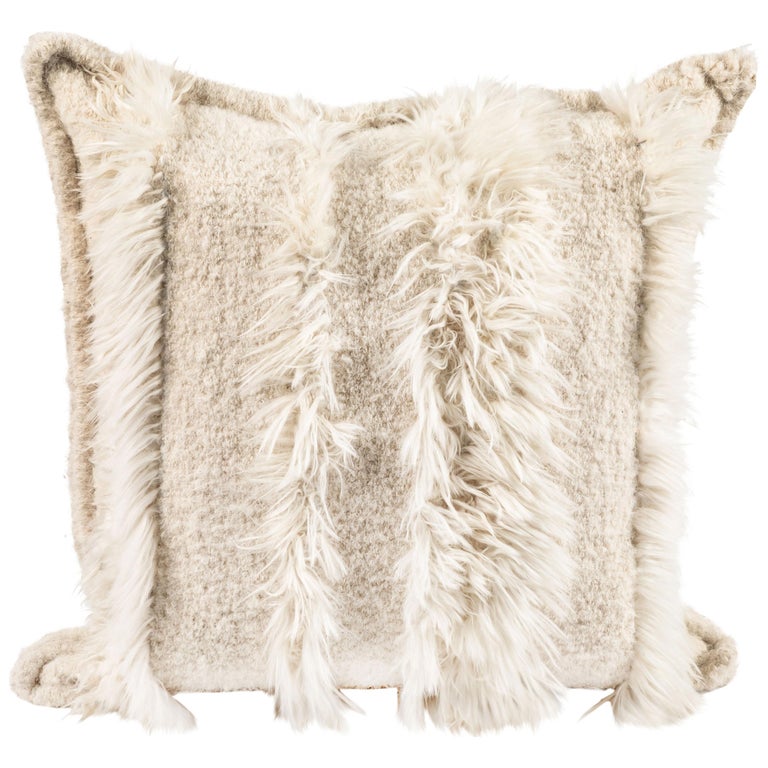 “Although I love color, when I use neutrals, it is important for the piece to have interesting texture, which this does. As a pillow, it has so much dimension and presence.” 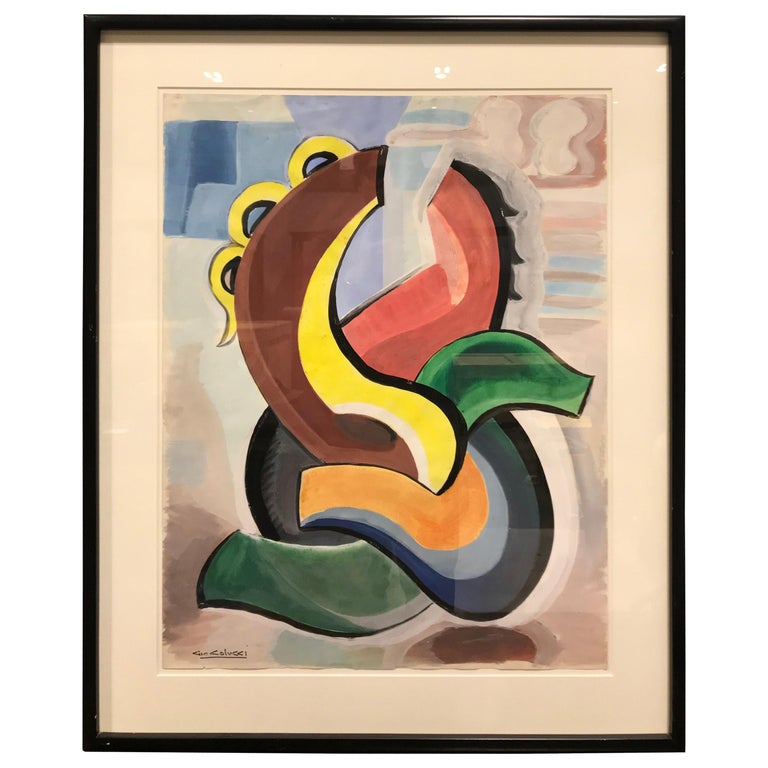 “I love that Giò Colucci lived in Florence, Paris and then Cairo. I feel his works portray this multicultural experience through their colors and the forms he creates — so wonderful!”