Sawyer Berson Plays by the Rules, and Breaks Them Too 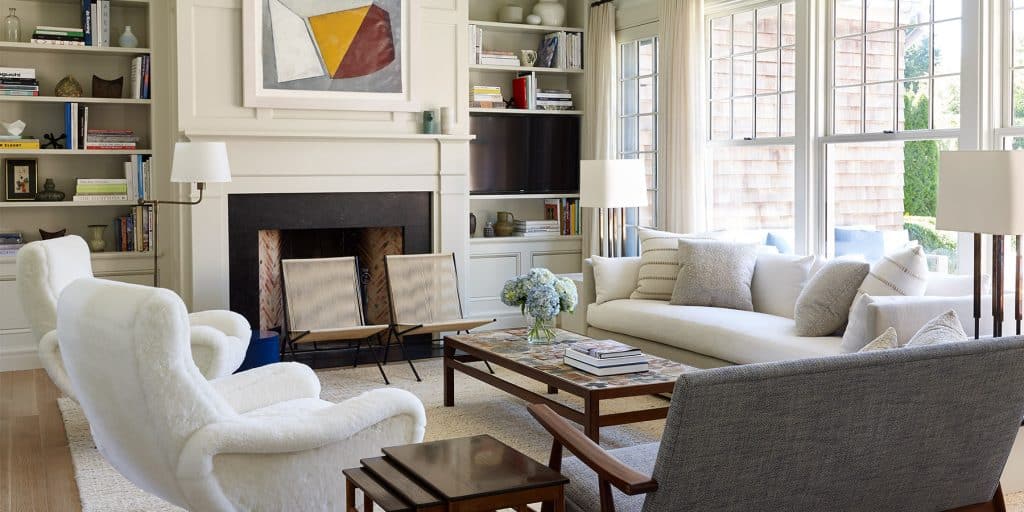 The architecture and interiors firm specializes in creating singular residences tailored to the clients’ styles — and even their wardrobes. 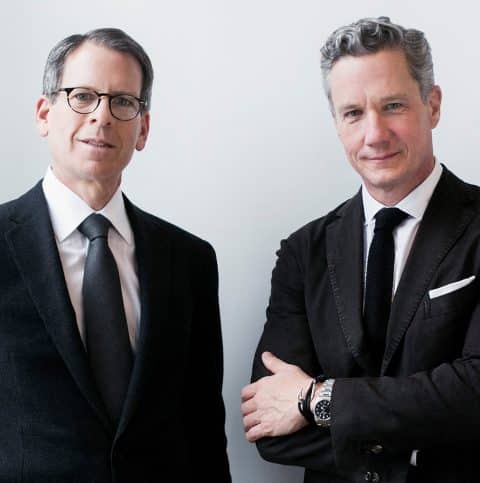 John Berson and Brian Sawyer (portrait by Hannah Sider). Top: The living room of a home on Egypt Lane in East Hampton, New York, features a nesting tables by Hans Wegner. A work by James Gilroy hangs above the mantel and a pair of Allan Gould string chairs sit in front of it. Photos by Joshua McHugh unless otherwise noted

But designers are, in fact, required to flout that old chestnut. A beautiful project with many rich elements can curdle quickly through one iffy material choice or the thoughtless placement of a single piece of accent furniture.

Credit Manhattan’s Sawyer Berson for perspiring over the very tiniest details without losing sight of overarching architectural concepts, and handling both with aplomb. Led by partners Brian Sawyer and John Berson, the firm’s team of 25 designers (and a pug named Alice) oversees a portfolio of haute residential projects in New York and the Hamptons and farther afield.

“We met working in Robert Stern’s office,” Sawyer says of his connection with Berson, remarking that many architects from that storied firm have established their own practices. “I wanted a studio that would work on architecture, gardens and interiors all under one roof, and it evolved into this multidisciplinary, multi-style approach.” The Indiana native, who got a master’s in landscape architecture at the University of Virginia, often takes the lead design role. As for Berson, a New Yorker who got a master’s from Harvard’s Graduate School of Design, he “has the deepest historical knowledge of anyone here,” says Sawyer, “and he’s a great editor.” 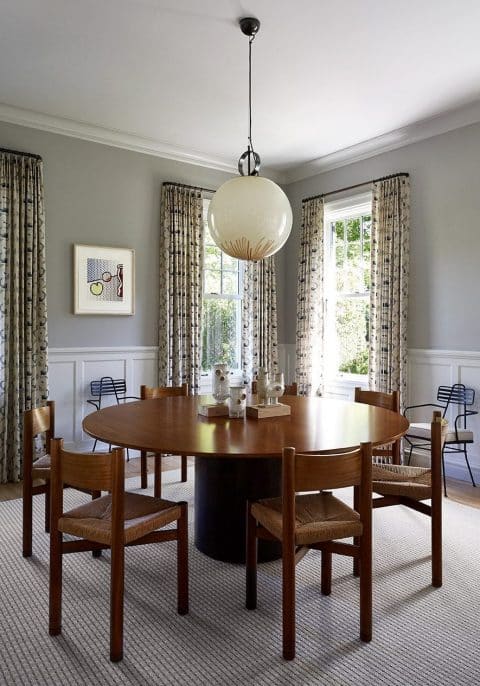 In the East Hampton dining room, a set of Charlotte Perriand chairs from MDFG surrounds a table by Eric Slayton. The Murano glass hanging light is from Lost City Arts.

“It’s all driven by the clients,” Sawyer says of this spectrum of styles. “We take their initial instincts and clues and work with that. So every project is different from the next, and there’s no single rule.”

Behold, for instance, a brand-new shingle-style house on Egypt Lane in East Hampton. On the outside, it seems from some angles like an artifact of the turn of the last century, complete with pitch-perfect roof brackets. “It’s pretty strict, meant to look like it was built between 1895 and 1910. There’s a steady vocabulary to the region, and I don’t like to mess around with the formula too much.” says Sawyer. “You can add your own voice once you get to know the style well.” To break the rules, in other words, you have to master them first. 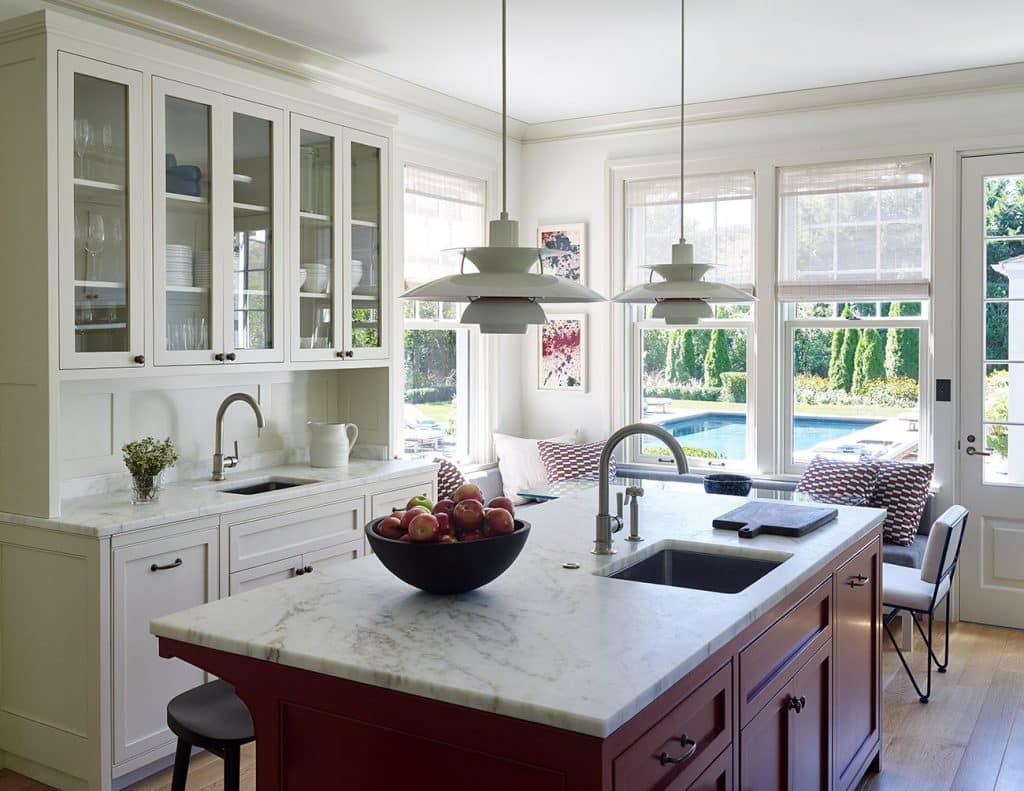 Light bounces around the sunny kitchen, amplified by the glass-front cabinets and palette of various shades of white. A pair of Poul Henningsen PH50 pendant lamps hangs over the island. 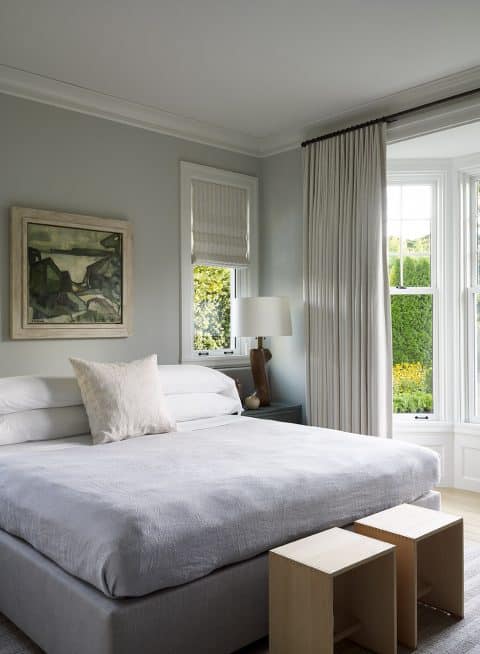 A 1967 work by Parmo Baslund is mounted above the bed in the junior master. The carved-wood table lamps are from Retro Modern, and the pair of Max Bill Ulm stools are from Artware Editions.

Inside the home, the firm’s distinctive voice gains volume. The interiors are soft and modern but with numerous points of interest that have been collected from all over; as in the majority of the team’s projects, many of these unique finds were discovered on 1stdibs. “The breadth and depth of the site makes it the ultimate resource,” says Sawyer, noting that it works as both a catalogue and a library — the offerings are always at least “inspo,” as the kids say, even when the designers are making custom pieces for their clients.

The East Hampton house’s modestly proportioned living room is airy and easy, with a modern bent. Pride of place is given to Hans Wegner pieces, including small nesting tables and a clean-lined settee, the latter sourced from Denmark 50 on 1stdibs. Also from the site are a vintage Tue Poulson coffee table (Denmark 50 again) and a striking pair of vintage Allan Gould string chairs from Sputnik Modern. 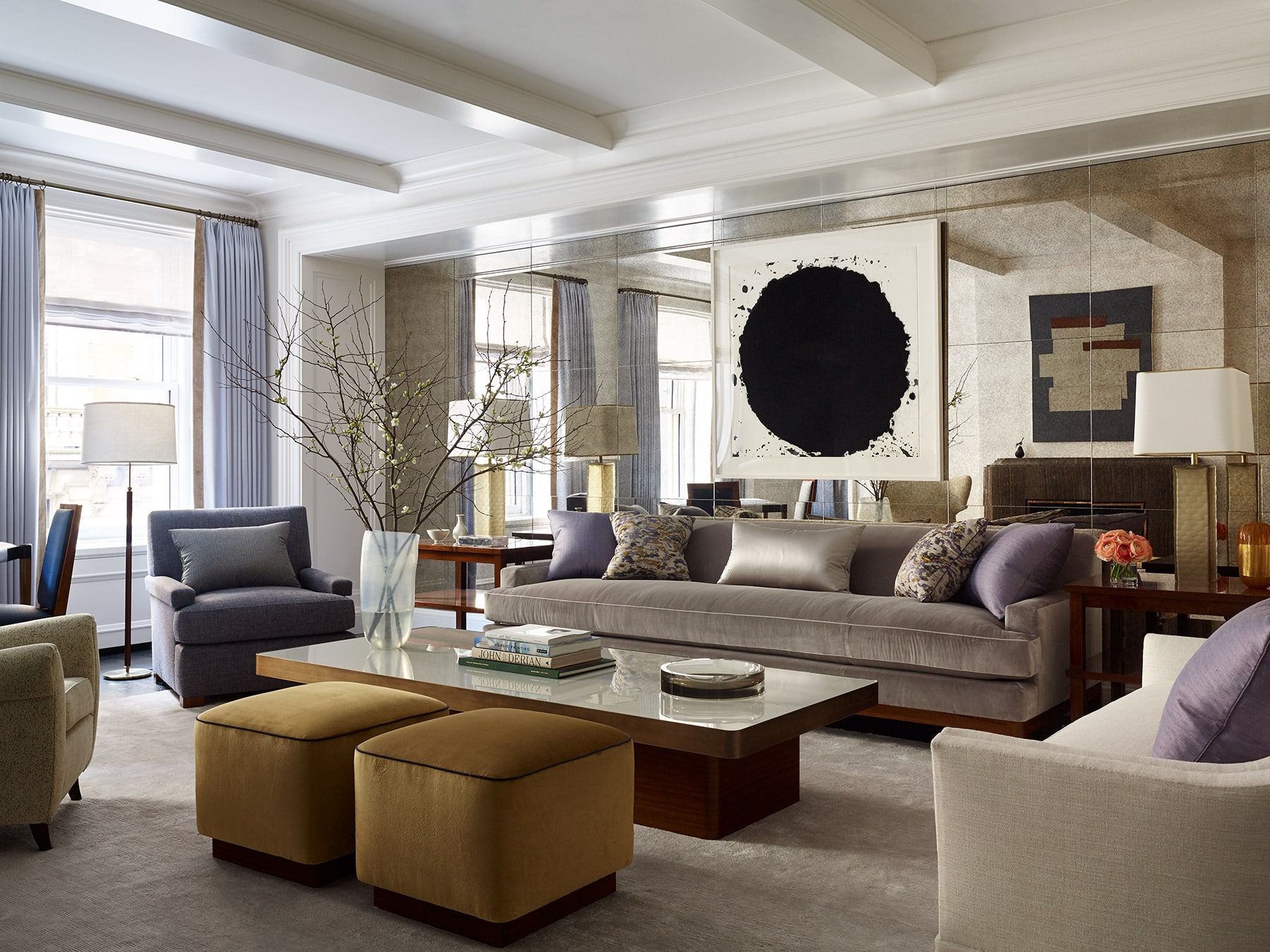 Sawyer Berson designed the custom sofa in this Fifth Avenue apartment. The antique mirrored wall is intended to create the illusion of infinite space and light. The etching, Al Green, is by Richard Serra. 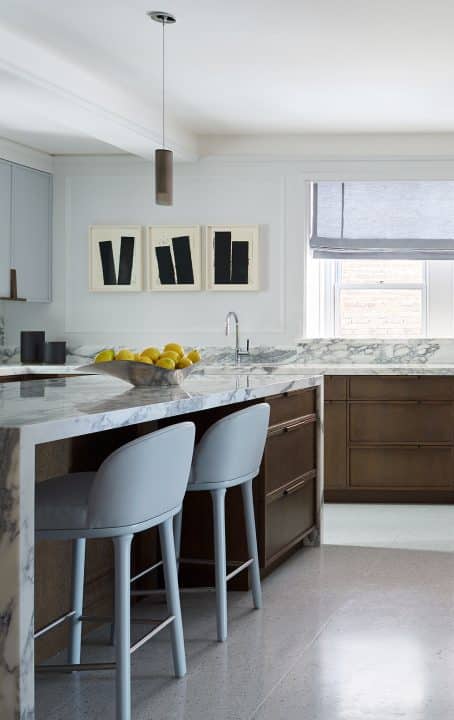 A trio of Serra etchings is displayed on a wall in the kitchen. Pendant lights by Sean Lavin illuminate the waterfall-edge marble island.

When he says that the client determines the look of a project, Sawyer isn’t exaggerating: He designed an apartment on Manhattan’s Fifth Avenue to go with the owner’s predominantly blue wardrobe. As it happens, the Sawyer Berson team also likes colors at the cool end of the spectrum, so they were happy to design an all-blue dining room (Benjamin Moore’s Winter Lake went on the walls) presided over by a stunning Vistosi stepped chandelier from the 1960s.

“I was worried it would be too much, but the minute we placed the key artwork there” — an abstract Mark Saltz painting in several colors, including blue — “it all came to life,” says Sawyer. A gleaming custom walnut dining table and a fireplace surround modeled on one Sawyer saw in Paris, with a modified Greek key motif, complete the elegant scene. 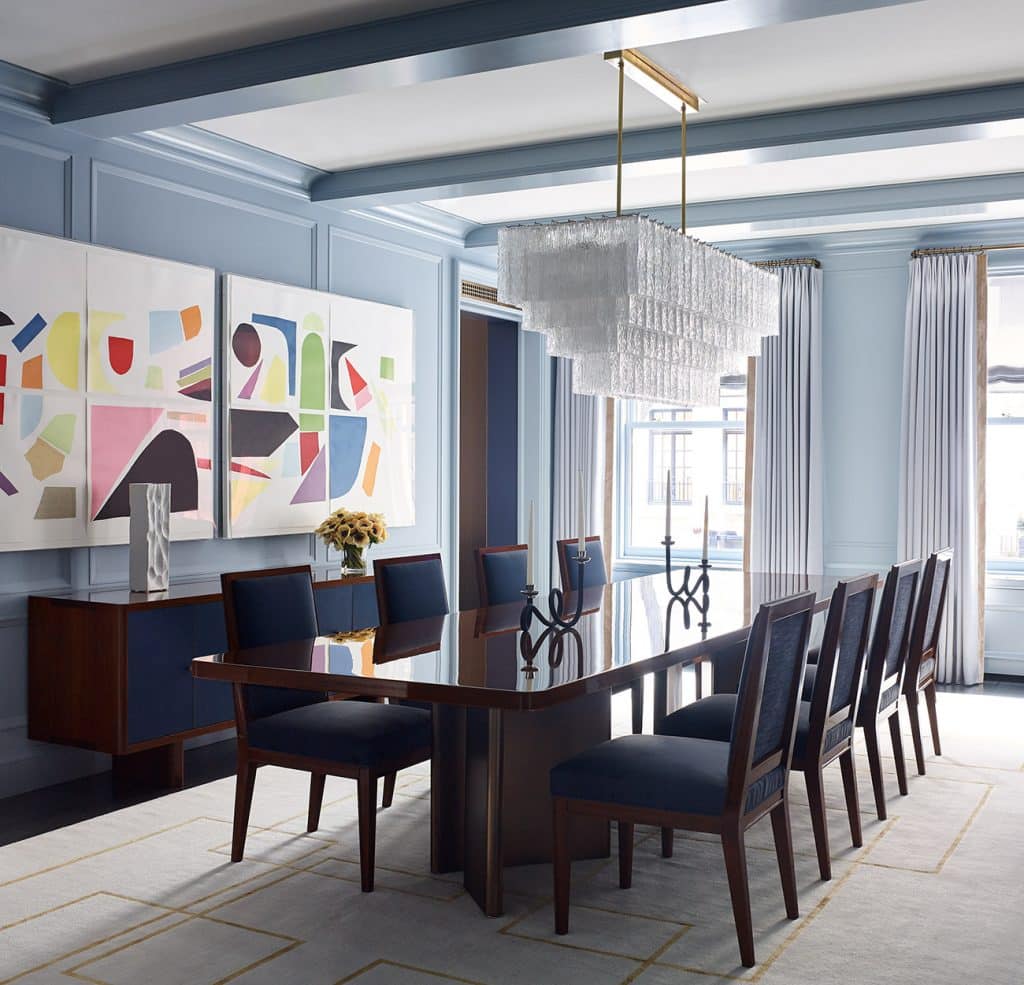 A 1960s Vistosi chandelier from Adesso hangs over the Sawyer Berson–designed table and chairs in the dining room. The art is by Robin Cameron.

The master bedroom illustrates the firm’s deft use of subtle neutrals, sporting several shades in the ecru and gray families, all playing off one another. And there’s not a lot of furniture crowded into the space, giving the custom barrel-backed chair and custom bed, both trimmed in wood, room to breathe. “Our bedrooms are simple and luxurious, end of story,” Sawyer says.

Silk wallpaper, like the one used in that bedroom, is among Sawyer’s go-tos, as he’s a texture obsessive. “Those papers give a level of richness and depth that you can only get through a fabric, which is what they are,” he explains. Furniture gets the same treatment. “I always insist on the best silk velvets or cashmere bouclés. You should want to run your hands over it.” 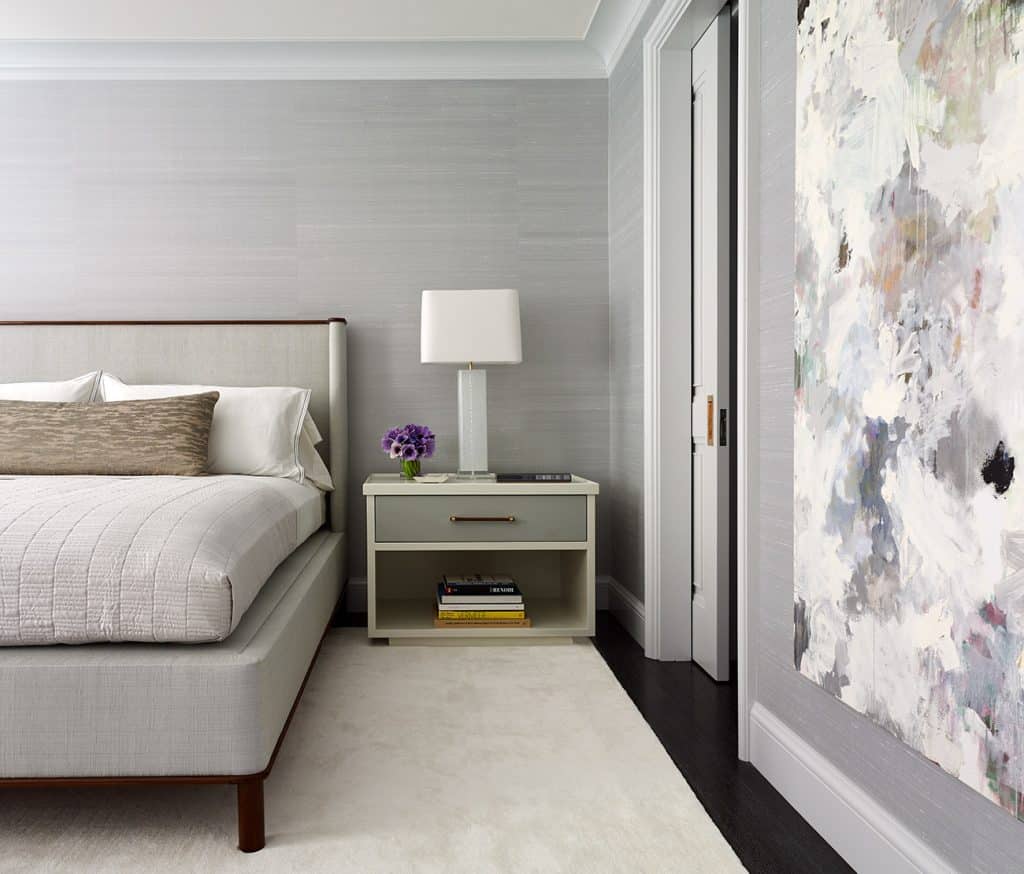 In the master bedroom, a pair of vintage latticino Murano glass table lamps flank the bed, which was designed by Sawyer Berson. The painting is by Viktor Kopp.

For the 2016 Kips Bay Decorator Show House, the Sawyer Berson team pushed its boundaries a bit with an ode to Milan’s famed Villa Necchi, going as far as putting an arborvitae outside the window to mimic cypresses. “I wanted to work with colors I’ve always hated — teal and orange,” Sawyer says, describing the Top Chef–like challenge.

Sure, the sofa’s orange silk adhered to Sawyer’s rules about softness, but it was juxtaposed with a striking terrazzo floor, both overlooked by Achille Salvagni’s striking multi-prong light fixtures from Maison Gerard. There were hard, brassy edges all over, but you still wanted to sit and stay a spell. 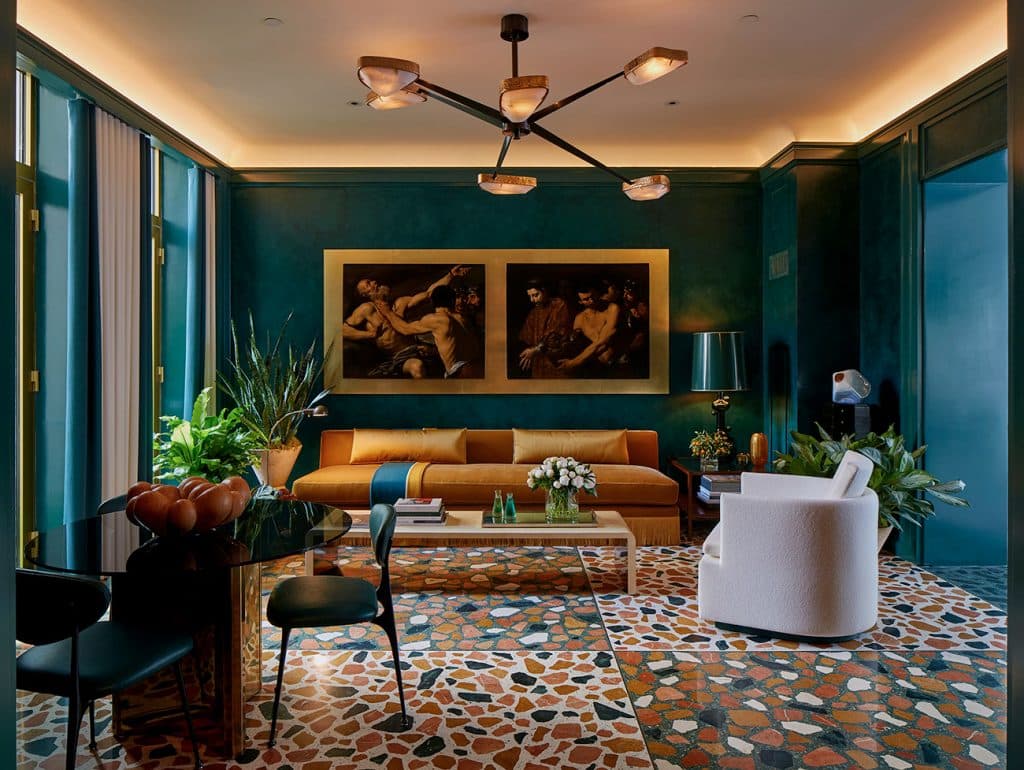 For the 2016 Kips Bay Decorator Show House, Sawyer Berson created a space inspired by Villa Necchi, in Milan. The firm outfitted it with an Achille Salvagni chandelier from Maison Gerard, a Jacques Adnet coffee table from Bernd Goeckler and a sofa and armchair of its own design. The artwork is a 17th-century Italian painting from a dealer who allowed Sawyer to mount it on a sheet of brass. Photo by Phillip Ennis

Sawyer even convinced Old Masters dealer Otto Naumann to let him remove a 17th-century Italian painting from its frame, mounting it on a sheet of brass for maximum pop. He’s used this gambit before but rarely to such impressive effect.

This was just one more case of Sawyer Berson working within guidelines — whether imposed by its clients, a certain style or its own preferences — while at the same time subtly and smartly, even playfully, upending them. That is something you can do only when your tastefulness card has been duly punched and your eye for detail is unerring. As Sawyer says of the Kips Bay Villa Necchi homage, “It ended up being fantastic, and we loved it.” 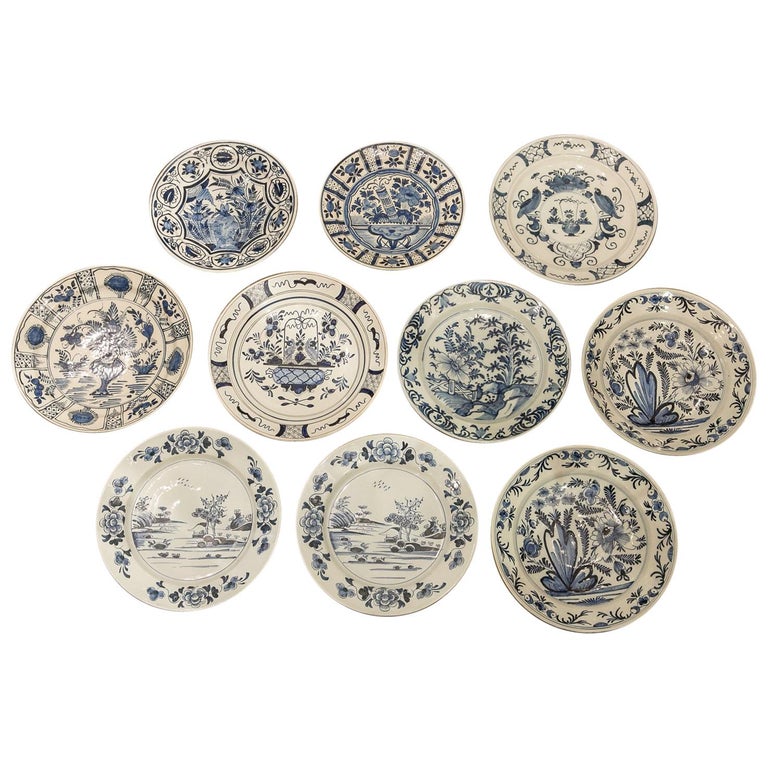 “This set of plates adds color and texture to an intimate dinner setting. I have a small collection of seventeenth- and eighteenth-century Delft pieces I use to accessorize my dining table for special guests.” 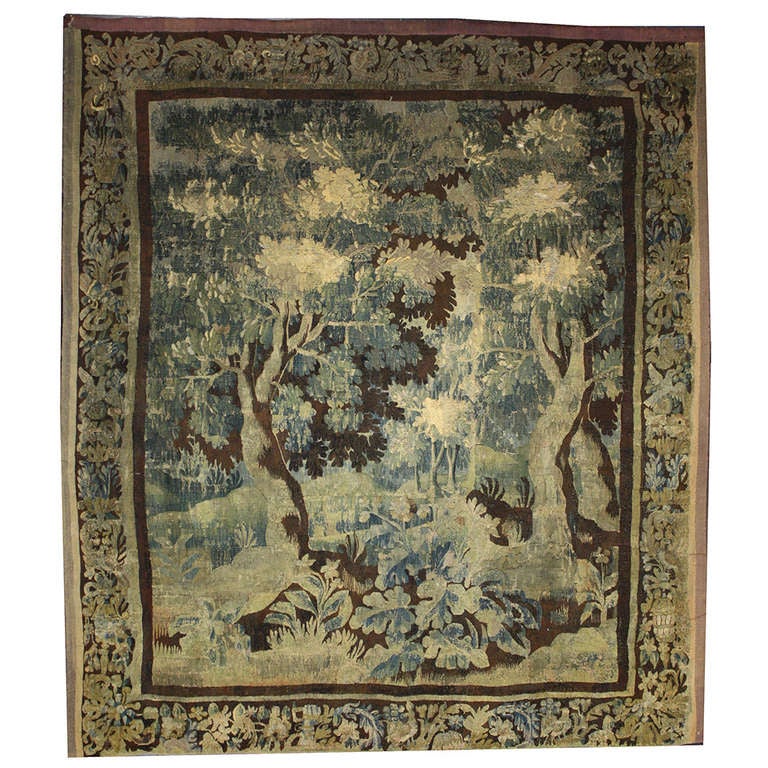 “I would love to place this intricate and detailed Aubusson wall hanging with other period pieces, but it would be even more appealing as an unexpected backdrop for a more contemporary ‘collected’ interior.” 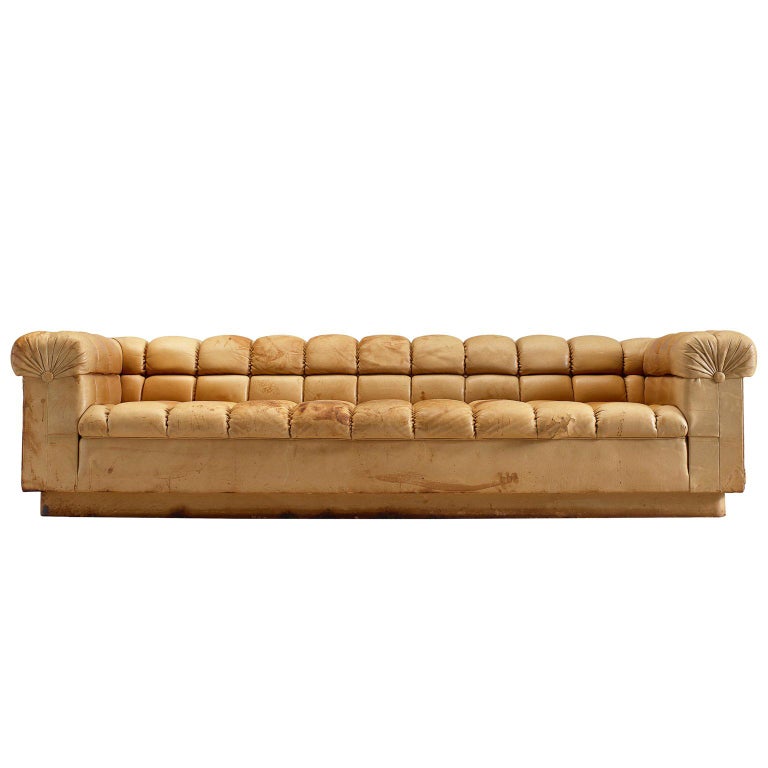 “I like the heavy patination of the leather on this piece. It adds warmth and character to a classic tailored sofa shape, making it feel less serious and more inviting.” 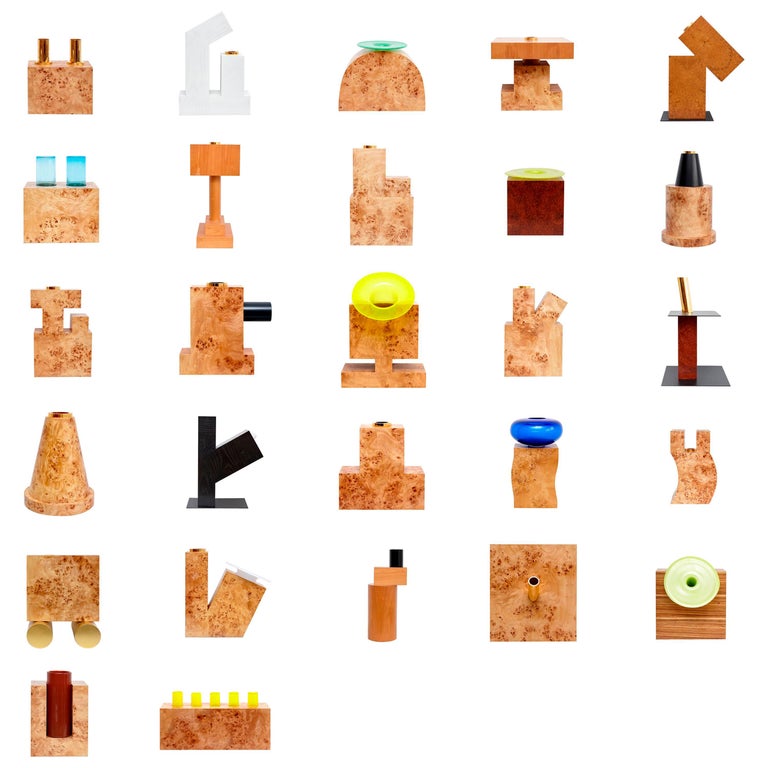 “I would use these twenty-seven unique vases to style bookshelves flanking a cozy fireplace in a chic paneled library.” 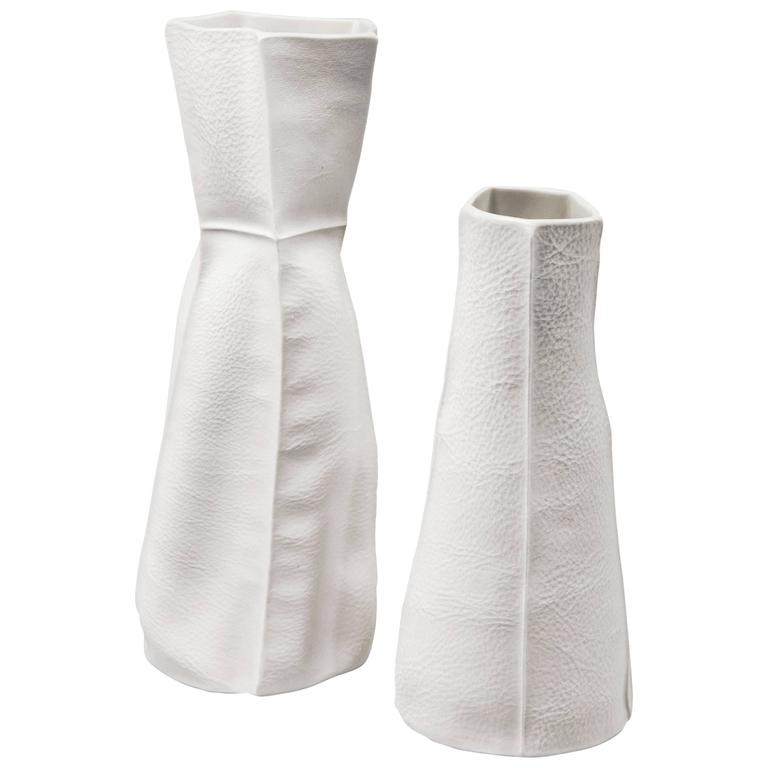 “In person, the texture and hand of these porcelain vessels is exquisite. I recently purchased a light fixture from this maker using the same method to light an atrium hall in the Hamptons.” 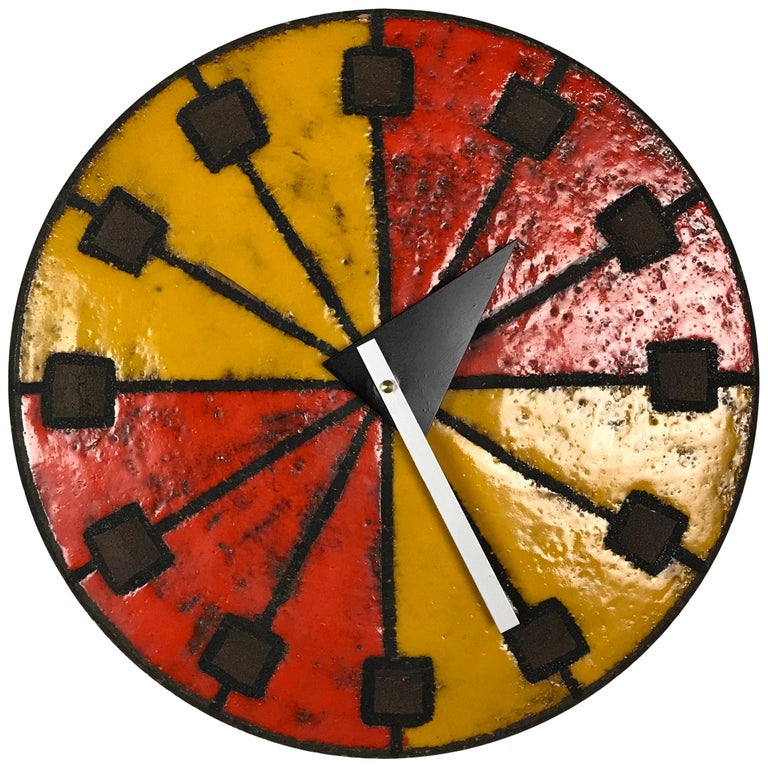 “Using practical ceramics like this clock from one of my favorite Italian studios would provide a pop of color in the kitchen!”