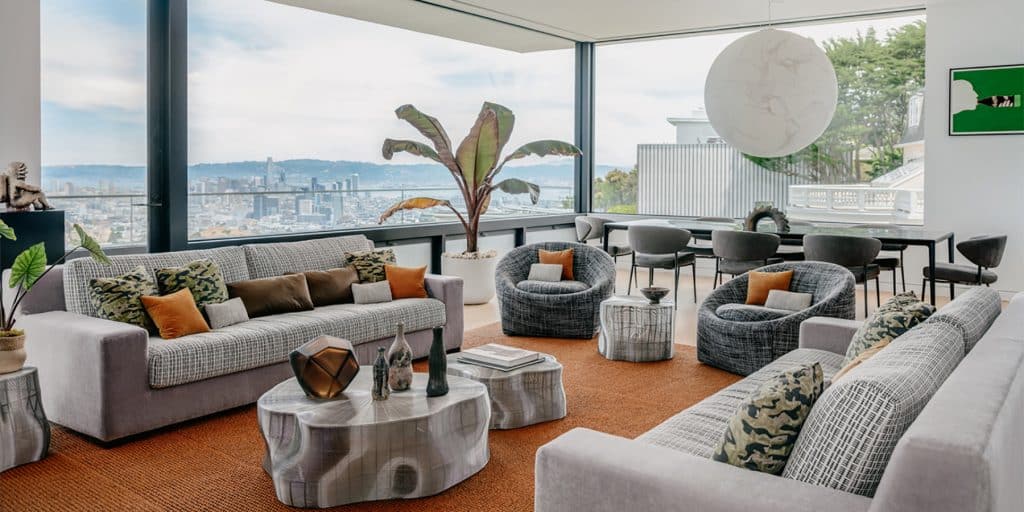 The California-based interiors wunderkind creates smart, soulful homes that feel like extensions of their occupants.

January 10, 2021In college, Sean Leffers recalls, “I wrote a paper about how Jane Austen used houses as symbolic extensions of their occupants.” Now, as a 36-year-old interior designer, he says, “I like to see my job in a similar light. I’m creating visual and atmospheric extensions of my clients’ personalities, values and dreams.”

And yet, for his most publicized project of 2020, Leffers had no client. The organizers of the San Francisco Decorator Showcase asked him to design a bedroom for an 11-year-old child. “Is it a boy, or is it a girl?” Leffers remembers wondering. “And then, I realized that really shouldn’t be my first question about a child.”

Instead, Leffers challenged himself to design a room that was ungendered, and he began looking for a palette that would suit that purpose. He found it right outside the house used for the Showcase, near the Presidio, where trees created a color scheme of chartreuses and mossy greens.

Using those hues as highlights against a neutral backdrop, he created areas for sleeping, playing and doing homework — selecting a Les Arc stool by Charlotte Perriand from Hep Galerie, woven folding chairs from Ellen Ward Scarborough Antiques and a Verner Panton Cone chair. But on the whole, he kept things spare. What he provided was, literally, room to grow.

Leffers, himself the father of two, says he got “a lot of pleasure” from “recognizing the space that we need to give people, especially children, around gender expression, and being able to render that in our design aesthetic.”

Leffers was born in San Francisco, and when he was 11, his family moved to his father’s hometown of Fort Wayne, Indiana. There, he says, “I spent a huge amount of my childhood in the library.” His chief fascination as a reader was the way people lived in other times and places.

He went on to study literature at the University of Indiana, where he wrote the Austen paper, and finance at Northeastern University, before moving to Los Angeles.

In L.A., he worked for Taschen, the publisher of art and architecture books; his job provided an education in visual culture. In his spare time, Leffers fixed up houses and sold them for a profit. The money was good, but he didn’t like designing spec interiors. “I wanted the work I was doing to be meaningful to individual people,” he says.

So, in 2015, he founded Sean Leffers Interiors in San Francisco. The firm will move, along with its owner and his family, to Los Angeles later this year. He has already designed two L.A. restaurants — Pacifique and Soulmate — and he says he hopes to open a store there selling “antiques, books, possibly clothes and objets of my own design.”

In the meantime, Leffers says, he has several major residential projects in the works. He is the interior designer for a new house in Beverly Hills by Belzberg Architects and a ski house in Utah by Tom Wiscombe, the avant-garde architect and chair of the undergraduate architecture program at SCI-Arc. And he’s designing a jet for the first time, which is tricky. “Unless you want to use the standard range of beiges,” says Leffers, who definitely doesn’t, “every material has to be firetested for FAA approval, which adds a layer of complexity.”

But Leffers has experience with tricky projects. In 2011, he and his then partner, solar energy innovator Tom Buttgenbach, bought an odd house atop Mount Sutro, in San Francisco. Believed to be that city’s highest residence, it originally looked something like a Swiss ski lodge in a Japanese strip mall. Architect John Maniscalco transformed it into a minimalist dwelling whose floor-to-ceiling windows maximize city and ocean views.

The windows still left plenty of wall space for art, and Leffers chose pieces as much for their meaning as for their looks. “I like a space to be about something,” he says. A guest room, for example, is about repression. “A phallic Mayan pot is displayed alongside a Flemish tapestry depicting Montezuma II capitulating to Hernán Cortés and a video work by the artist Carlos Motta about the historical violence of the Catholic Church toward gay people,” he says.

The living room, on the other hand, is about how environmental degradation may make earth unlivable. Over the lava stone fireplace is a piece by Indian artist Vibha Galhotra made of thousands of ghungroos (small metallic bells that are strung together to form the musical anklets worn by classical Indian dancers). It’s called Life on Mars, and it’s about the survival of mankind. Another piece in the room is a ceramic Incan astronaut by the Peruvian-American artist Marco Minaya. It’s no coincidence that the room’s Roche Bobois coffee tables look like metallic tree stumps — “very beautiful but extremely tragic at the same time,” says Leffers.

Not every room has a theme, but there are always ideas in play. “When I can, I try to create tensions across periods and cultures,” Leffers says. At the base of the travertine stairway is a portrait by Ammi Phillips, an early-19th-century American painter. “When I stare into the eyes of one of his subjects two hundred years on, I see a real human soul looking back at me,” says Leffers. “That intimacy feels relevant today.” A cylindrical pedestal supports an ornate silver sex toy made by Valentín Demarco, a Buenos Aires artist Leffers admires for “injecting queerness into his country’s traditional culture.”

In Leffers’s study, a mid-century modern chair is covered in black-and-white-patterned mud cloth from West Africa. The black steel tables are by Stephane Ducatteau, while the masks above the Christian Liaigre loveseat were made by the Tussian people of Burkina Faso.

Leffers says that, as much as he loves contemporary architecture, he also has an affinity for traditionally styled houses. About five years ago, he bought a 1980s “hacienda” in Rancho Santa Fe, near San Diego, which he and his sons, Trey and Julien, use for warm-weather getaways. “I eliminated the nineteen eighties tells,” says Leffers, who replaced recessed ceiling lights with chandeliers and hid mechanical chases behind wood beams. The house is laid-back, but the process of getting it that way wasn’t. Leffers decided to paint the exterior doors sage green, but he couldn’t find a sage green “with the balance of brightness and richness that I wanted.” It took lots of mixing to produce just the right shade. 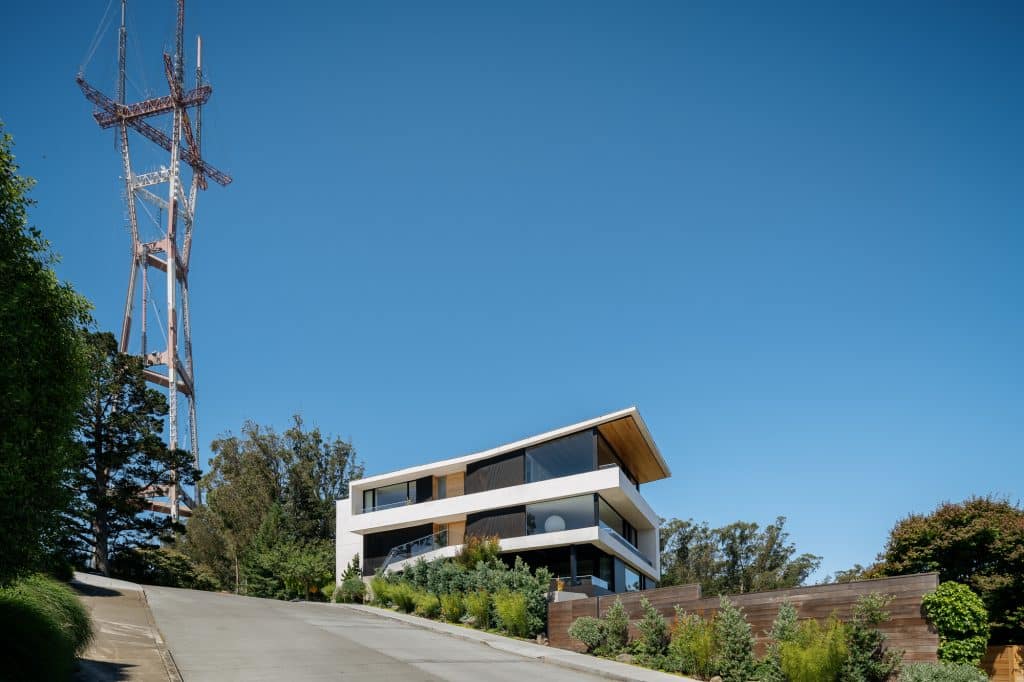 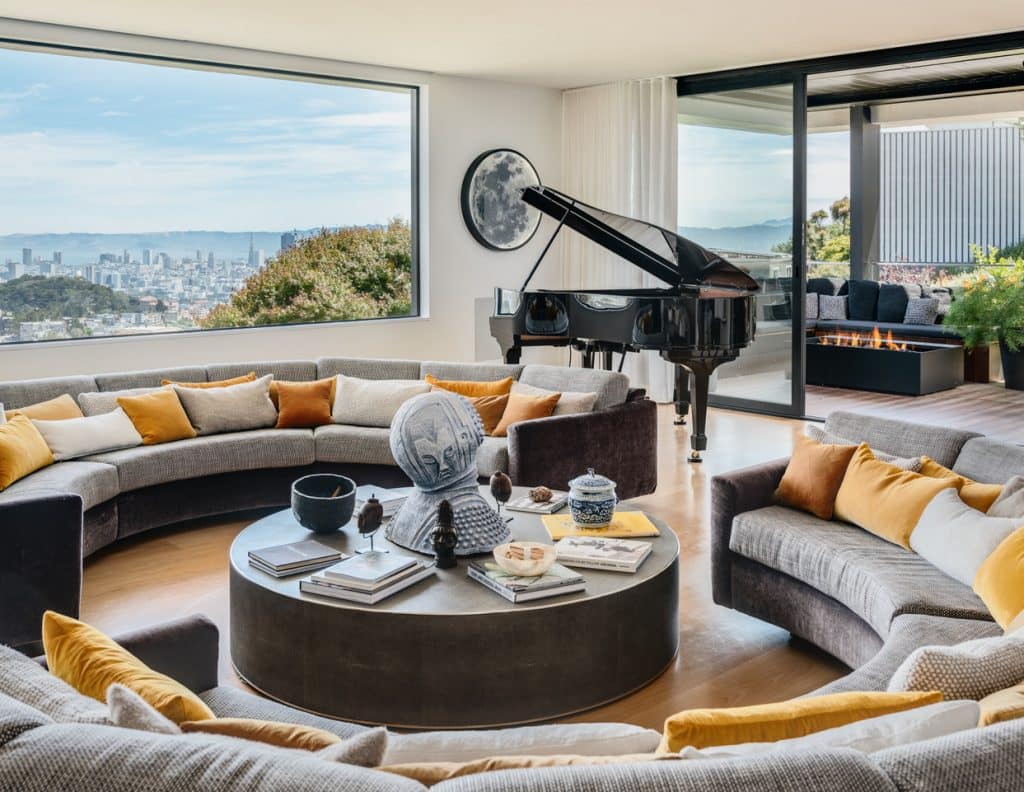 The home’s media room centers on a pair of semicircular couches by Adrian Pearsall. The sconce behind the Steinway piano is by Ben and Aja Blanc, while the sculpture on the coffee table is by Marco Minaya. 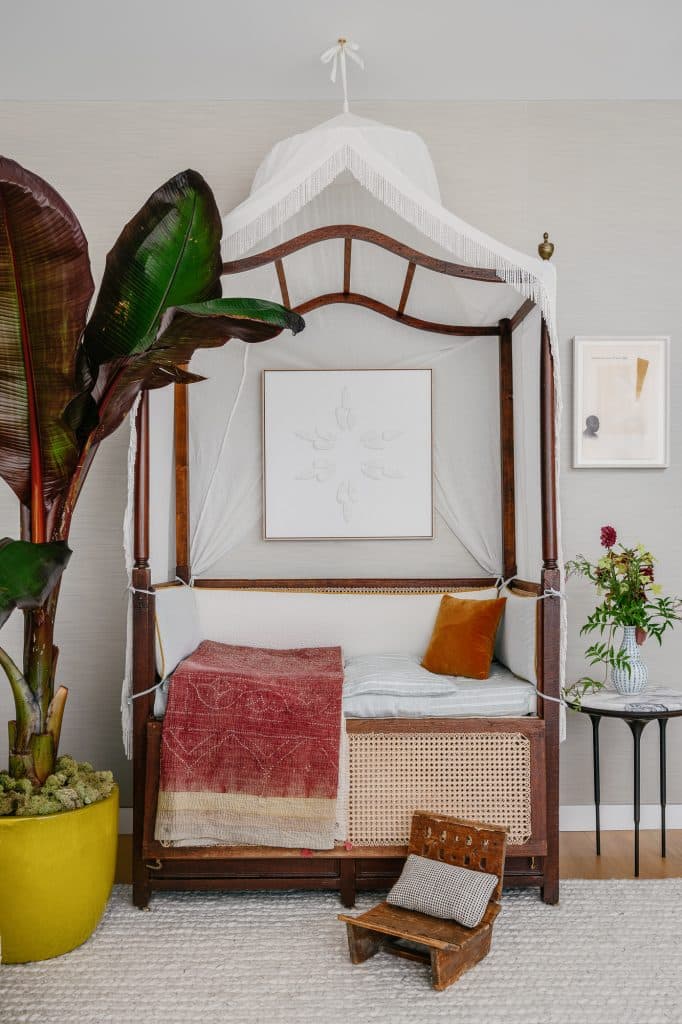 In the room of Leffers’s younger son, Trey, a little 19th-century Indonesian chair stands in front of a 19th-century Anglo-Indian daybed that the designer found at Black Rock Galleries. Javier Robles designed the side table for his furniture company, Lumifer. The artwork above the daybed is by Liora Kaplan, and the work above the table by Enrique Chagoya. 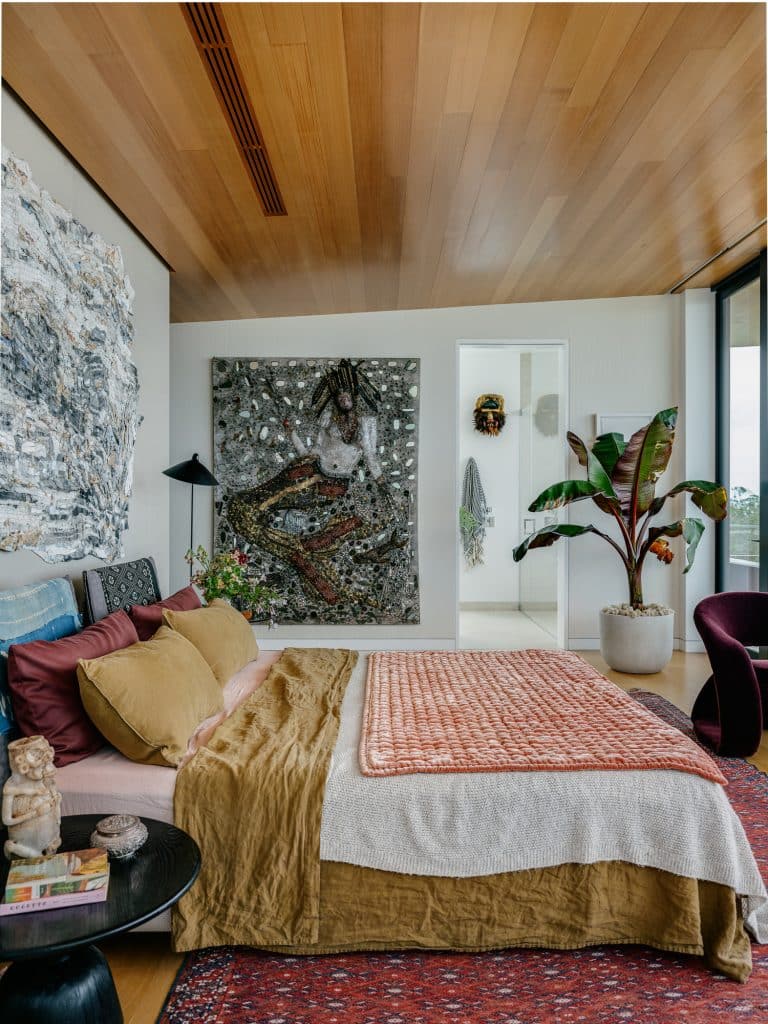 The principal bedroom in the house features a Minotti bed topped with Indonesian and African textiles. Leffers had the vintage Memphis-style chair by the window recovered in a Schumacher velvet mohair. A textile work by Francisca Aninat hangs above the headboard; the mermaid piece is by Debreus Lherisson. 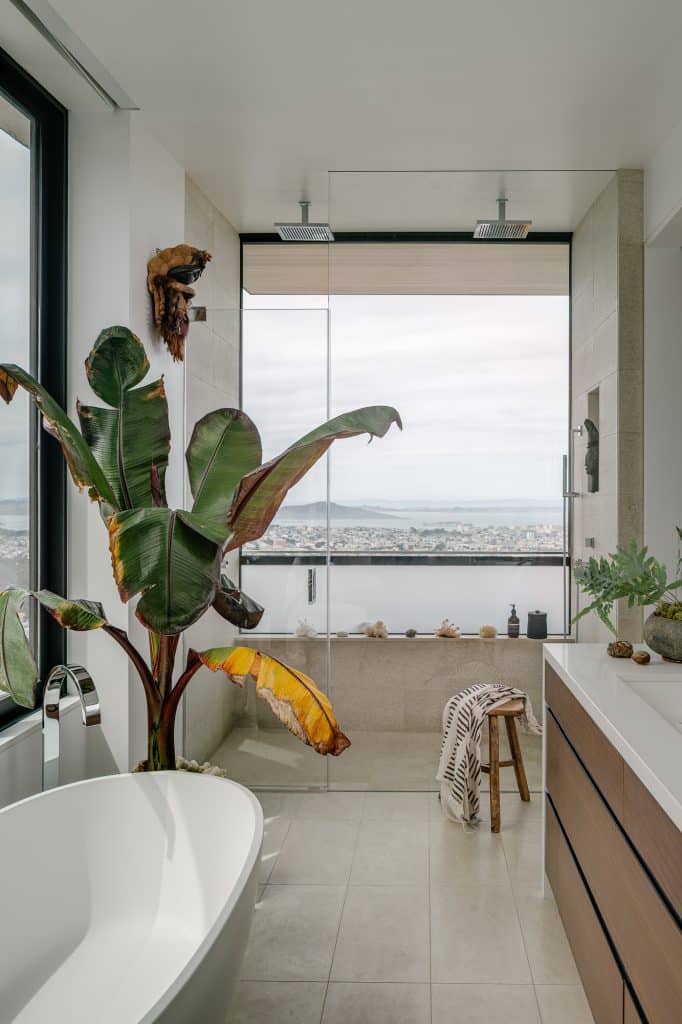 Affording sweeping views of the bay, the house’s principal bathroom features Dornbracht fixtures and a mask from West Africa. 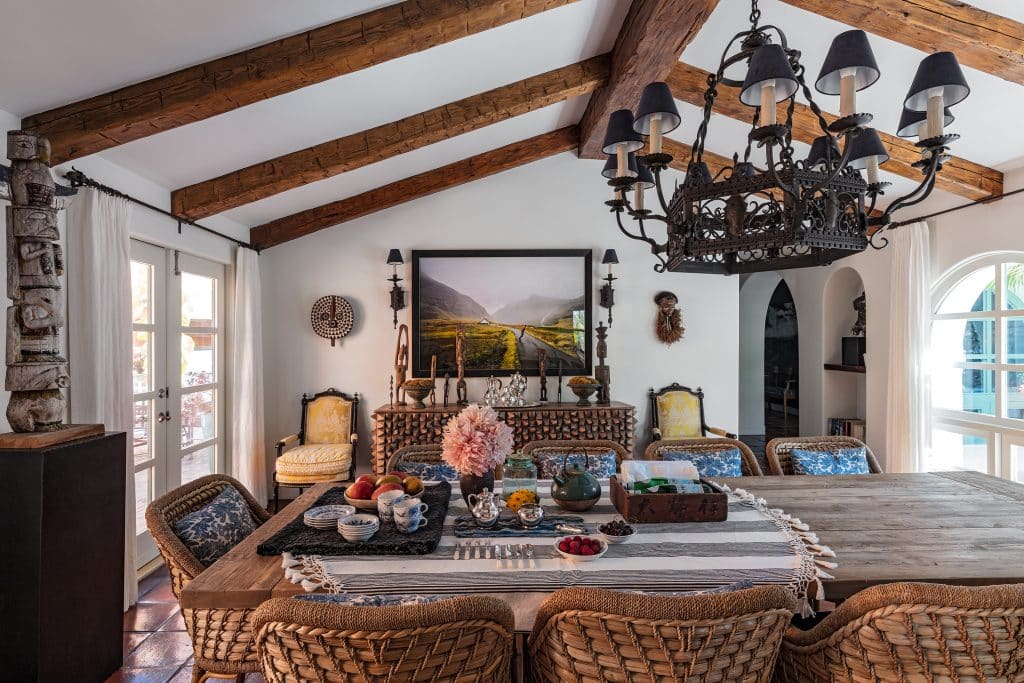 The dining room of Leffers’s home in Rancho Santa Fe, near San Diego, features Palecek chairs and a work by California photographer Chris Burkard. The chandelier and sconces are custom, made in Santa Barbara. Photo by Darren Edwards 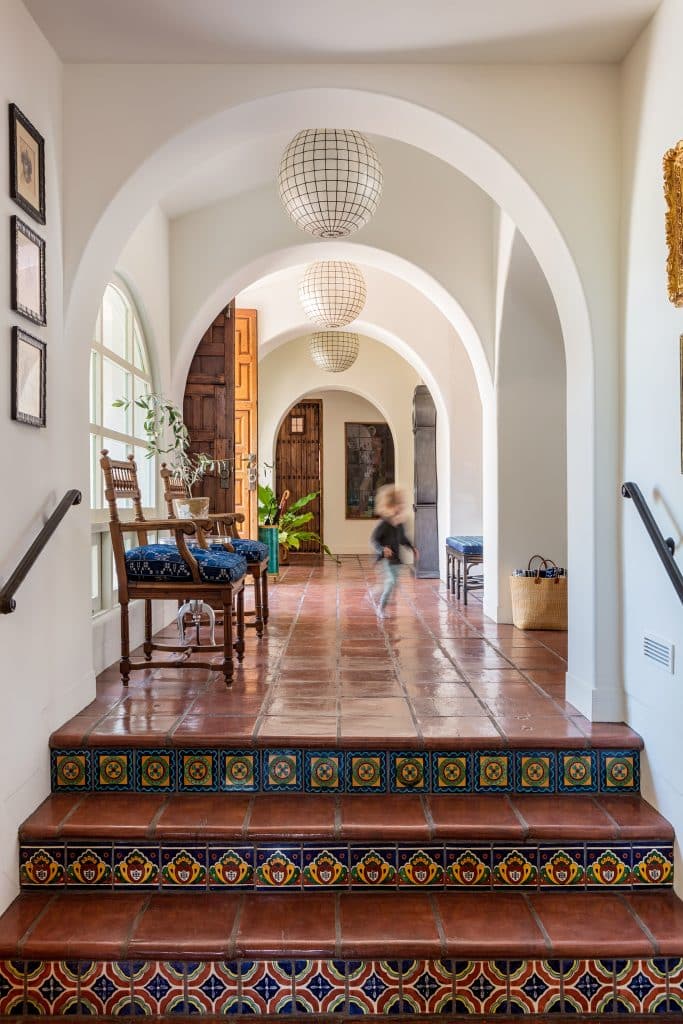 Leffers had the French chairs in a hallway reupholstered with a jacquard fabric he found at a local estate sale; both the seats and the textile are 19th century. The blue-green umbrella stand behind the double doors is by Aldo Tura; Leffers sourced it from Carol Master Antiques. Photo by Darren Edwards 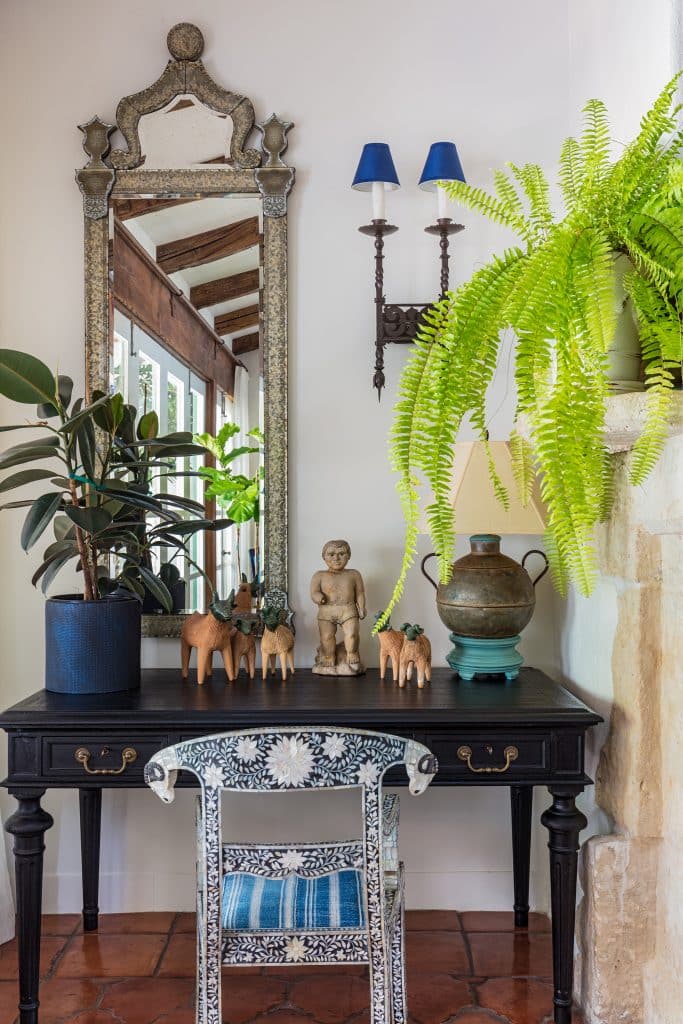 A mother-of-pearl-inlaid chair from Acorn sits at an antique desk in one corner of the living room. The lamp is vintage Mexican, and the statue of Jesus is from a colonial-era Mexican church. Photo by Darren Edwards 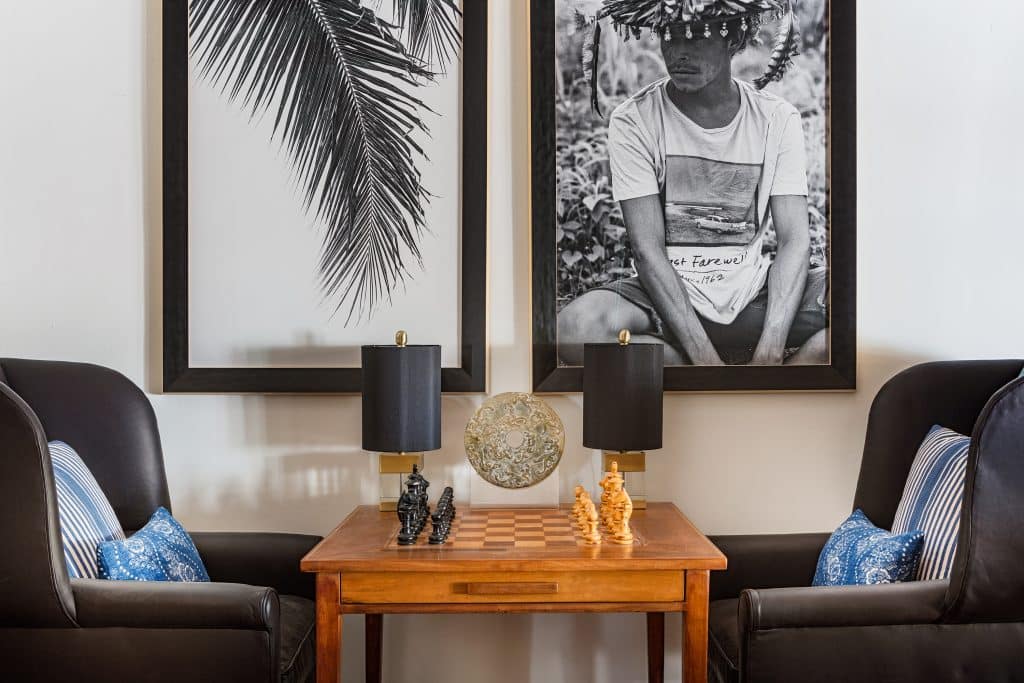 Photos Leffers bought at a shop in Sayulita, Mexico, hang over a Heywood-Wakefield chess table in another part of the living room. The pillow fabrics are from Ralph Lauren, and the jade bi disc dates to China’s Ming dynasty. Photo by Darren Edwards

Then, he began mixing furniture as carefully as he mixed paint. Referring to just one end of the living room, Leffers notes that the nine chairs there include six that he bought on 1stDibs, a pair of barrel-back mid-century Italian seats from Horseman Antiques among them. The leather Peter Marino for Paltrona Frau sofa is from Lord Browns.

In another part of the room, he created a vignette around a Heywood-Wakefield chess table, also bought on 1stDibs. Behind the chessboard is a jade bi disc from the Ming dynasty. On the wall are black-and-white photos that he chose because “we needed something graphic and contemporary to cut the casa-ish-ness of the house.”

In his bedroom, Leffers draped a canopy bed in Lithuanian linen. Then, he layered the mattress with a wide variety of fabrics, some of them bought on trips to India and Turkey, along with a quilt purchased in Provincetown as part of a “magical Cape Cod day.” (Describing his process on Instagram, he wrote, “Amazing how many people and memories contribute to a room, and that’s only one side of the bed!”) A fabric fanatic, he likes to give a bed so many different coverings that you can change them around, he says, the way you change your clothes.

Now, he is renovating his new house in Los Angeles with the help of architect Tim Barber. It’s a Southern California Colonial Revival from the 1930s. He plans to extend the colonial theme, using furniture in styles “that bridge European aesthetics with other cultures, including Raj, Indo-Dutch, Spanish Colonial, Anglo-Japanese and French Colonial.”

Leffers was initially drawn to collecting these pieces because “their imperfect execution feels very relaxed and human,” he says, adding “but over the past few years, I’ve had a growing awareness that these styles go hand in hand with some pretty terrible moments in human history.” To address that history, he plans to pair the antiques with artworks that offer a contemporary take on colonialism — by such artists as Zé Carlos Garcia, Carlos Motta and David Alekhuogie.

“Whether designing for himself or for his clients, Leffers sees his job as imbuing houses with meaning. “How you fill your space,” he says, “shows people how you view the world.” 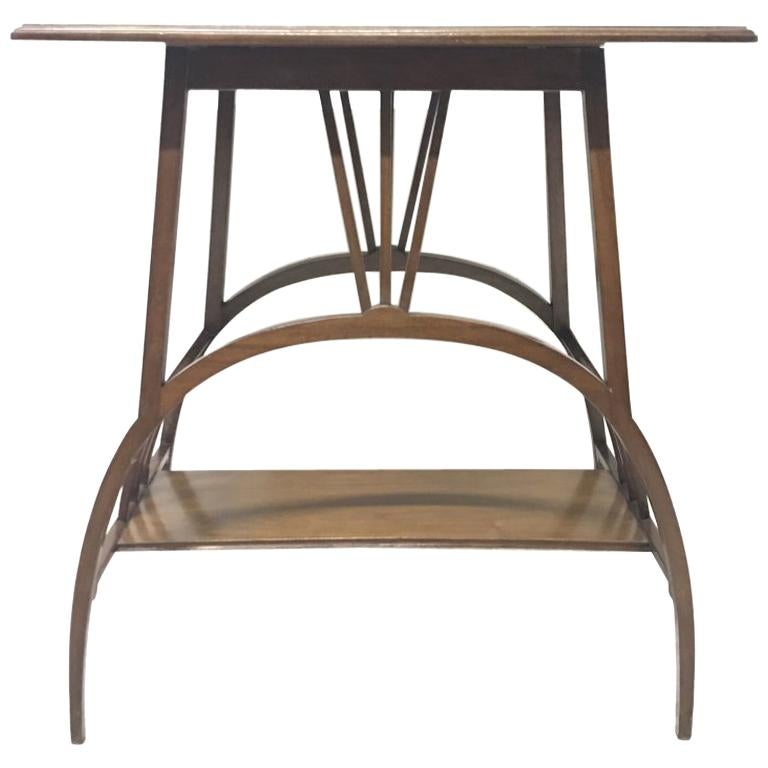 “One of my favorite furniture designers of all time, creator of the Anglo-Japanese style” 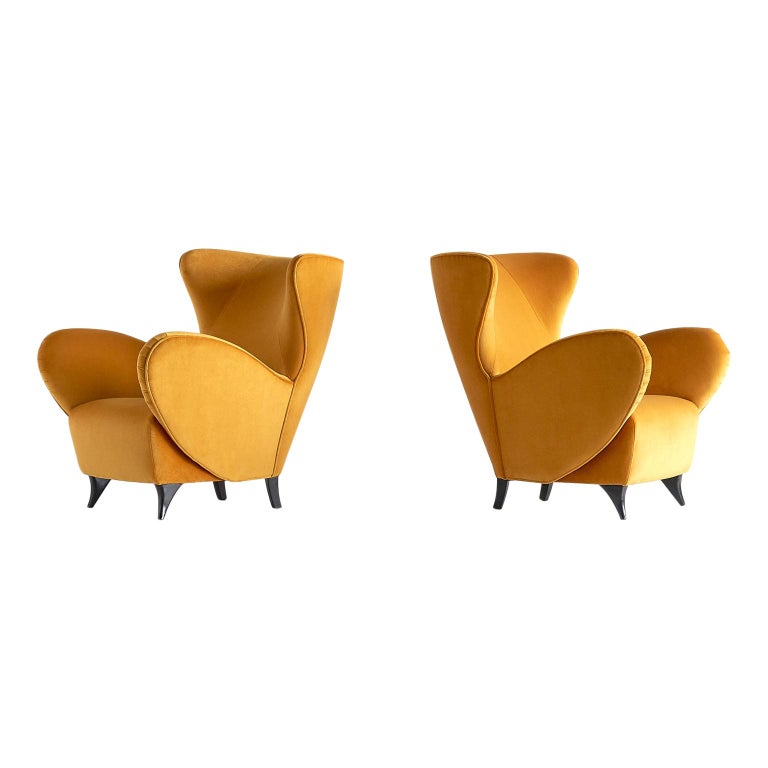 “Mid-century Italian is my favorite for curvy, playful seating.” 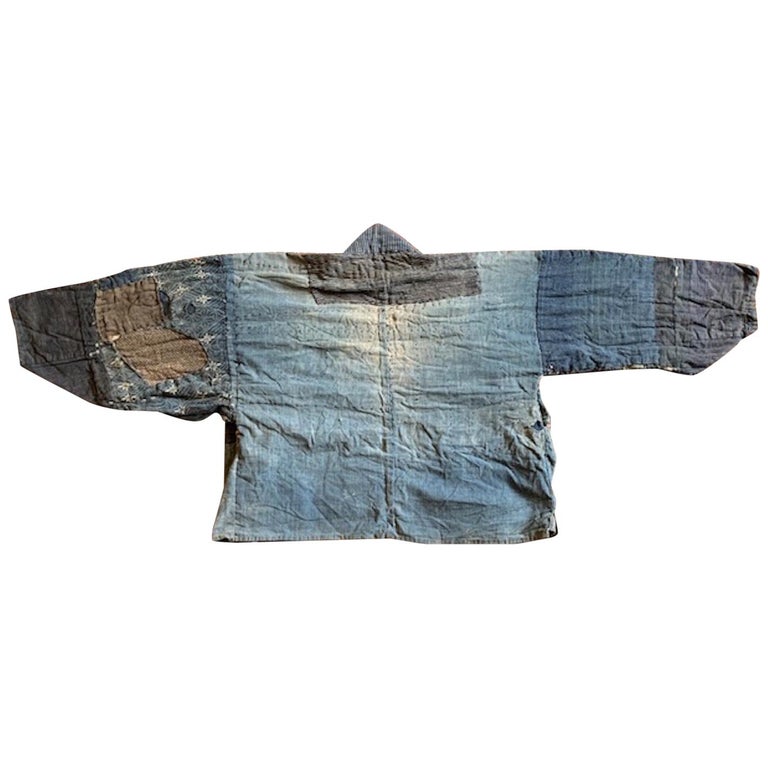 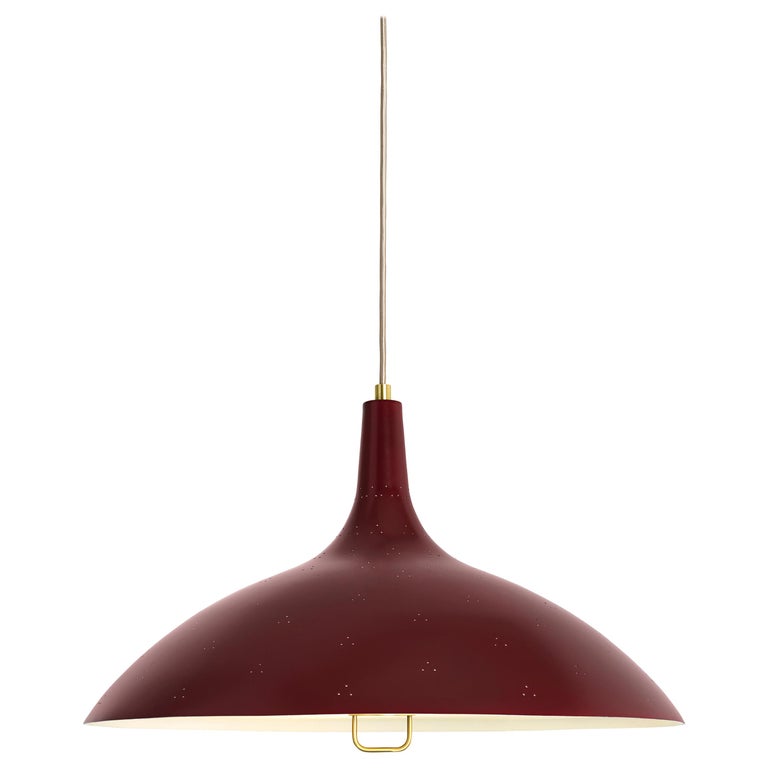 “Paavo Tynell’s design is as cool now as it was when it was first created.” 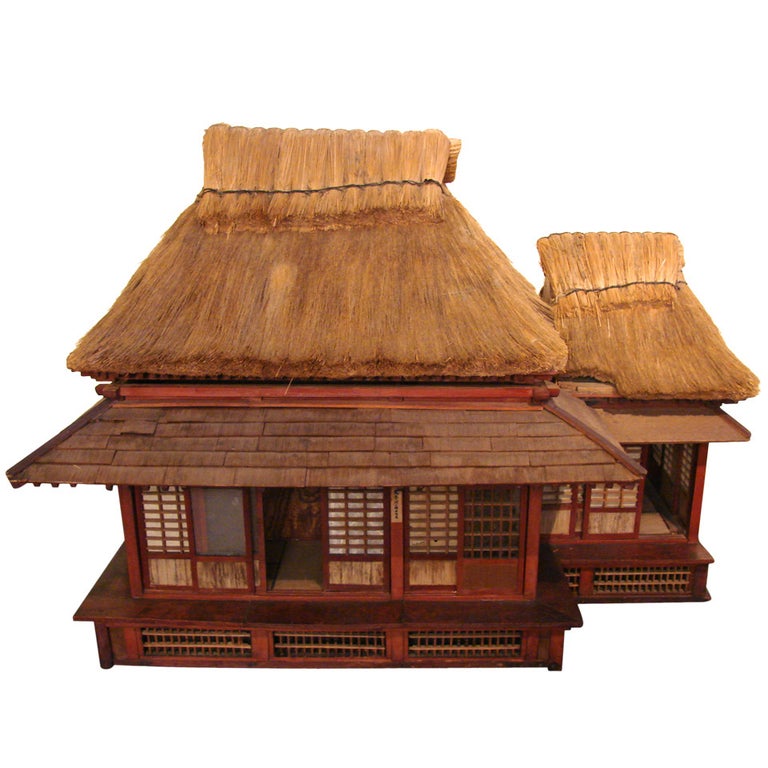 “I love Japanese tea houses, no matter the size.” 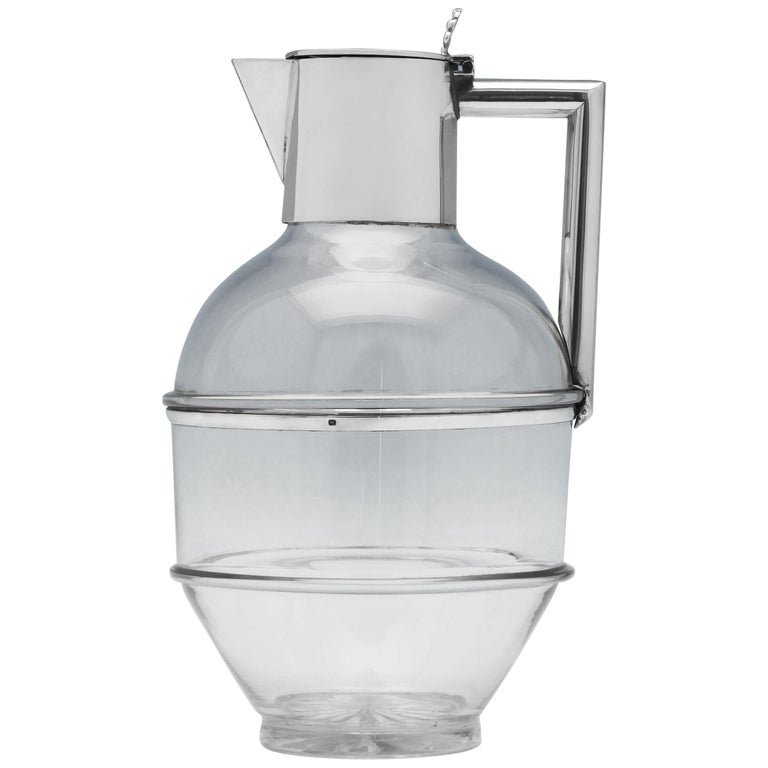 “Simultaneously beautiful and functional, with a great tension between modernity and tradition” 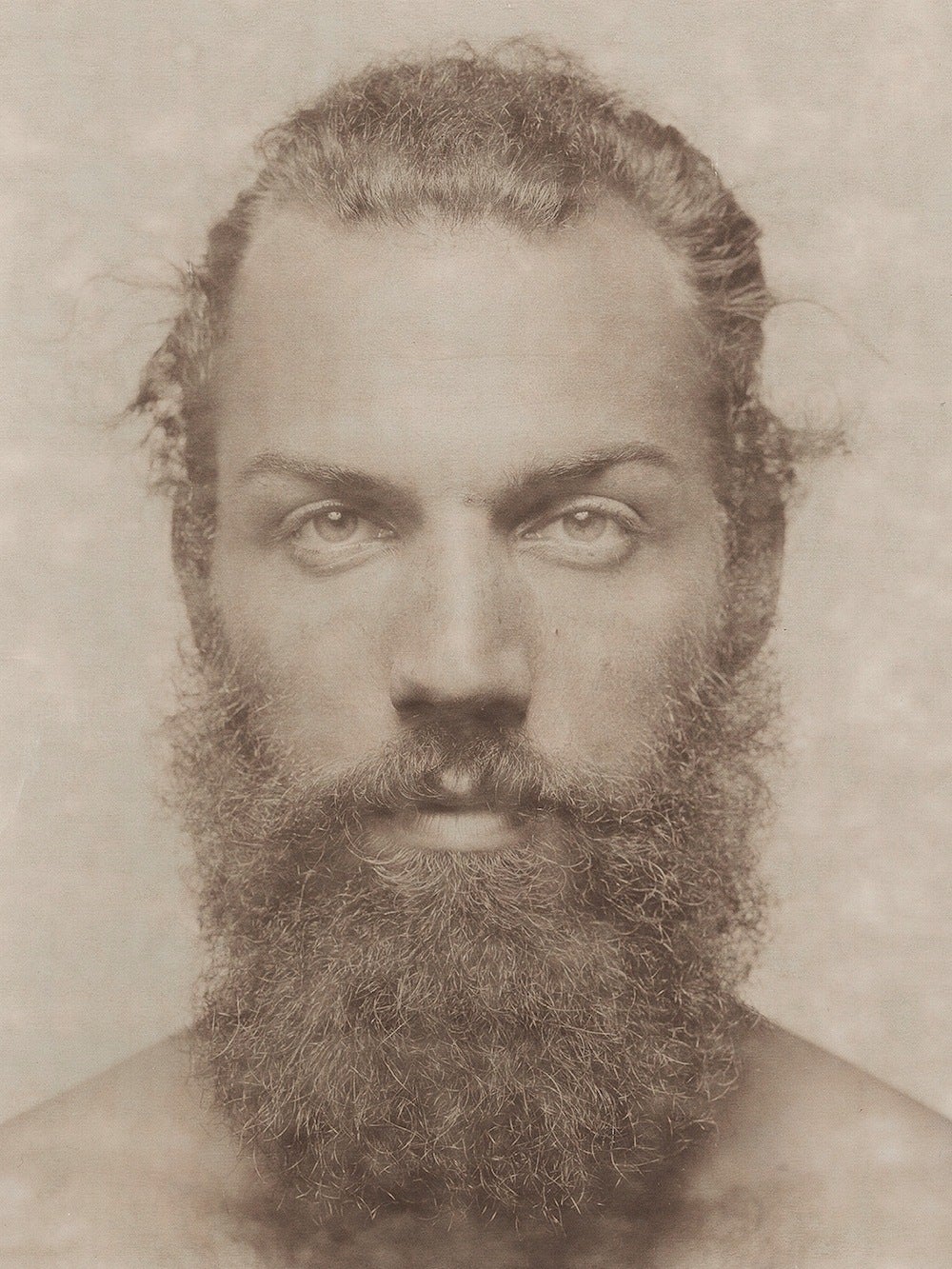 “Who doesn’t love a hot guy with a beard?”