Divinely Down to Earth 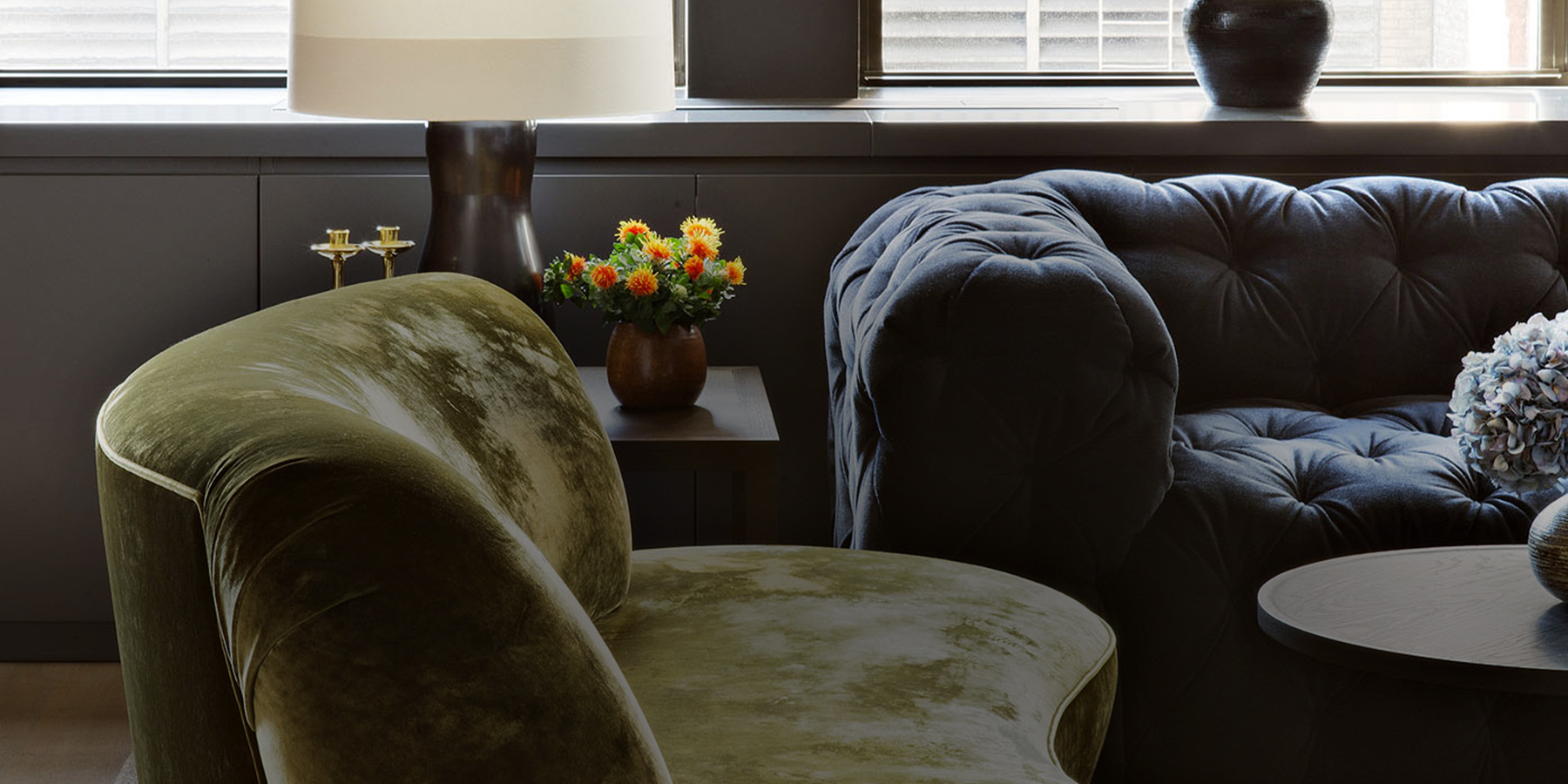 New York architect Shamir Shah brings to his relaxed yet refined, thoroughly modern interiors an appreciation for the warmth of natural materials and the soothing effect of earthy tones, which he acquired when growing up in the Kenyan countryside. 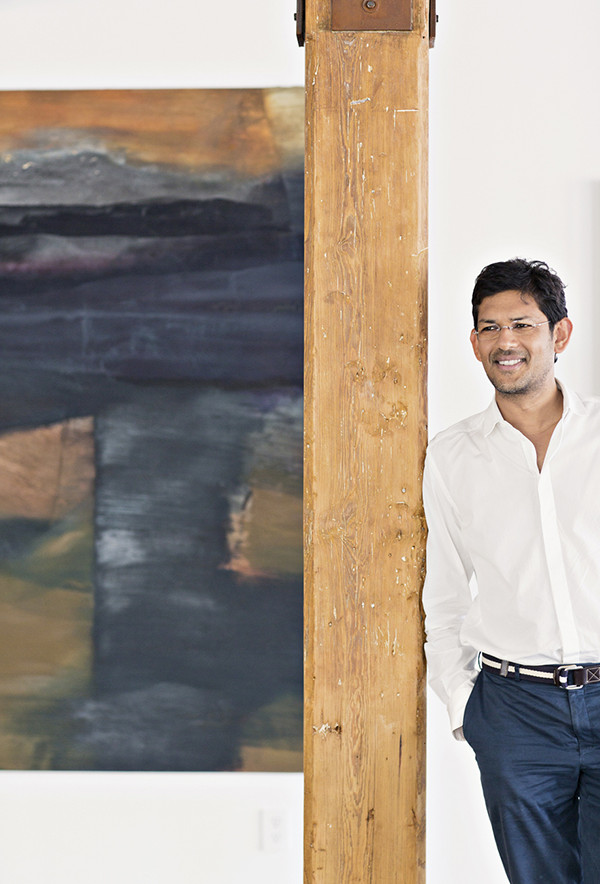 We live in this completely frenetic environment surrounded by dilemma, chaos and noise,” says New York architect and designer Shamir Shah. “It is a subtle but continuous assault on our senses. I think it’s important to remove people from this. I’m told that my work has a sense of quiet; perhaps it’s more contemplative than the norm.”

Certainly Shah’s interiors feel tranquil and nurturing. The cliché term “warm modernism” is nevertheless appropriately deployed here, for the reductive silhouettes of his furniture choices, the absence of patterned fabrics and the unadorned simplicity of his architectural envelopes are counterbalanced with a wealth of organic textures, earthy colors and natural materials — wood, jute, rattan, leather. And unlike many pristinely contemporary spaces devoid of the evidence of human life, Shah’s environments are punctuated by a considered selection of objects that make rooms feel comfortable and lived in.

Quiet and contemplative are also apt words for Shah himself. A gentle, soft-spoken man, he often pauses before offering answers that are consistently thoughtful and intelligent. Seated at the conference table in his open office, Shah looks a decade younger than his 51 years, elegant and lanky in black pants, a blue polo shirt and sneakers. With classical music playing softly in the background and six employees absorbed in their computer tasks making little noise other than mouse clicks, the atmosphere of the workplace is serene yet purposeful. Shah’s dark-eyed gaze has a certain intensity and concentration, too, but he proves down-to-earth and a little embarrassed at being the focus of attention. 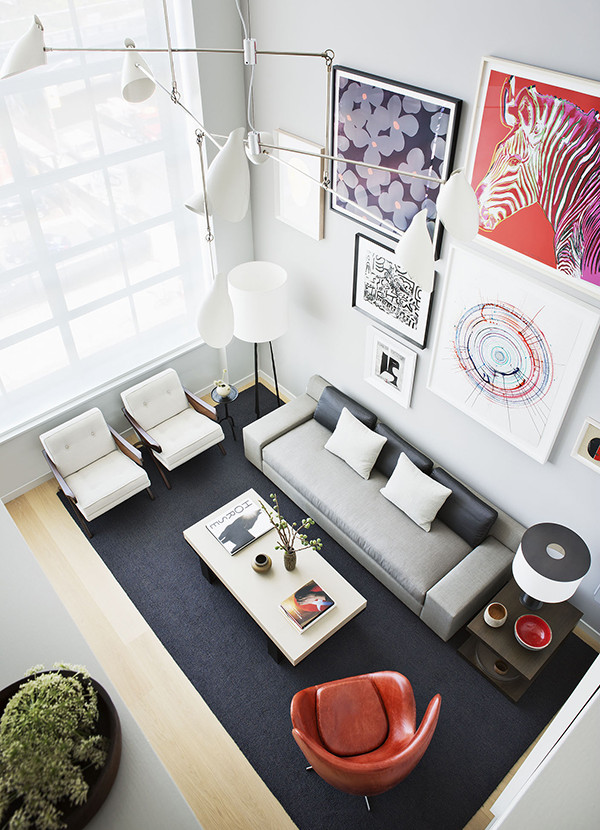 “I have to believe that growing up on the African continent influenced my work,” says Shah, who was born to Gujarati parents in Nairobi, Kenya. “At the time, it was a large, sprawling city, with a population of only one million, and nature was always accessible.” His paternal grandfather grew coffee and tea on a vast property where Shah would often ride horses. Though he recalls being fascinated as a youth by old-fashioned Indian courtyard houses, and by Karl Henrik Nostvik’s 1973 Kenyatta International Conference Center — “one of the first modernist buildings to go up in Nairobi” — it was his equestrian pursuits that determined his early course of study at Yale.

Shah had intended to pursue a degree in veterinary science, beginning with premed studies. “I switched majors in my second year,” he says. “My art and architecture classes were much more fun and invigorating.” The Yale campus boasted buildings by modernist masters such as Louis Kahn and Gordon Bunshaft, and the architecture department was famously based in a controversial Brutalist building designed by Paul Rudolph in 1963.

A semester abroad in Florence studying art history and architecture also made a substantial impact on Shah. “The superficial decorative aspects of the Renaissance period are not as important to my work today,” he admits. The classical concepts of the style, however, are. “The buildings of the Italian Renaissance had a beautiful sense of scale and proportion,” he explains. “Cities were planned with great care, the pragmatism of things working well and to human scale, order, the use of light and available materials.” All of these proved enormously influential. 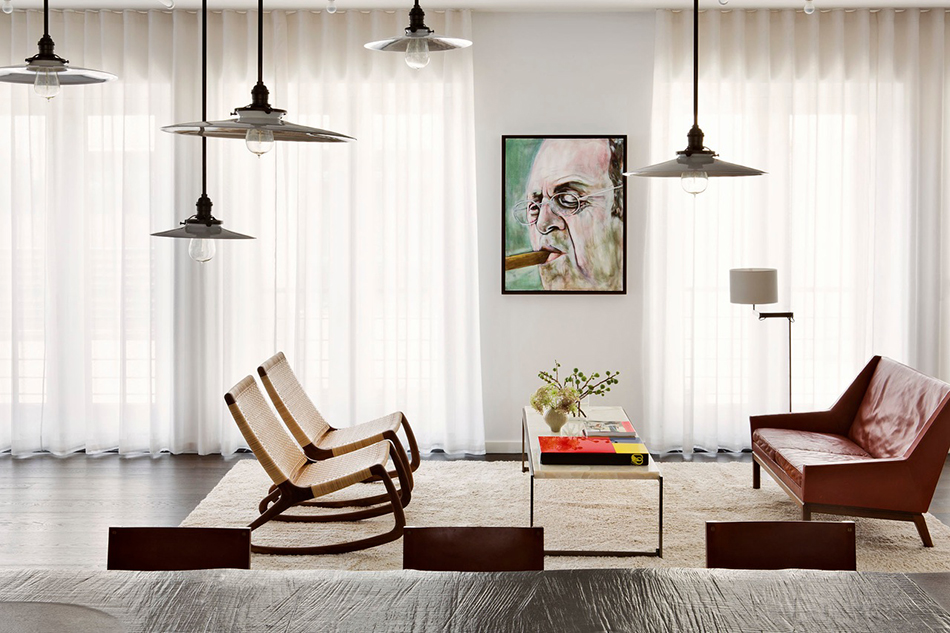 Artfully arranged lighting fixtures over the dining table of an open-plan Soho apartment add animation to the vast space. Photo by Manolo Yllera 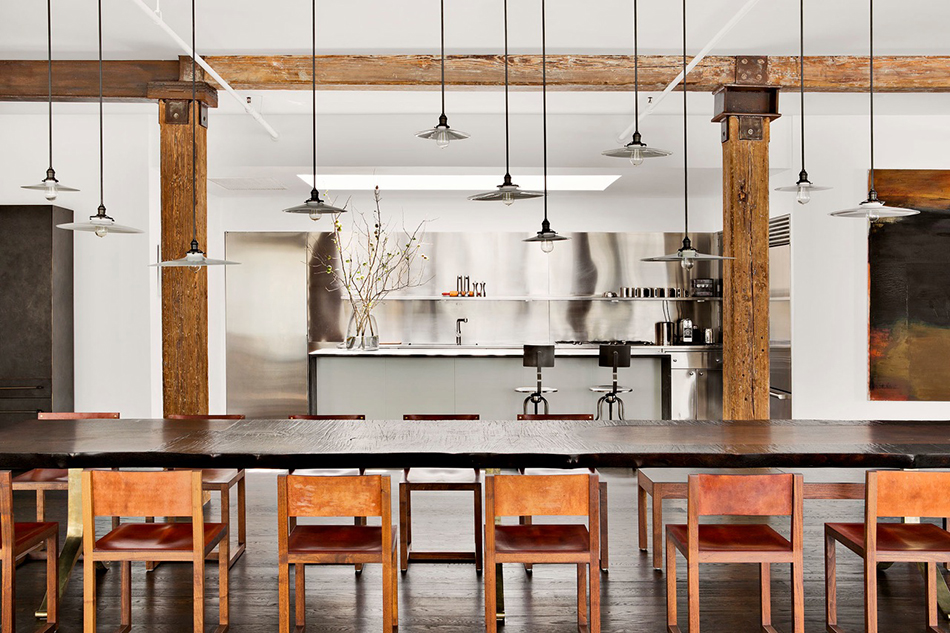 In the dining area of the Soho apartment, Shah exposed the loft’s rough-hewn wooden framework to contrastr the polished stainless steel of the adjoining kitchen. Photo by Manolo Yllera 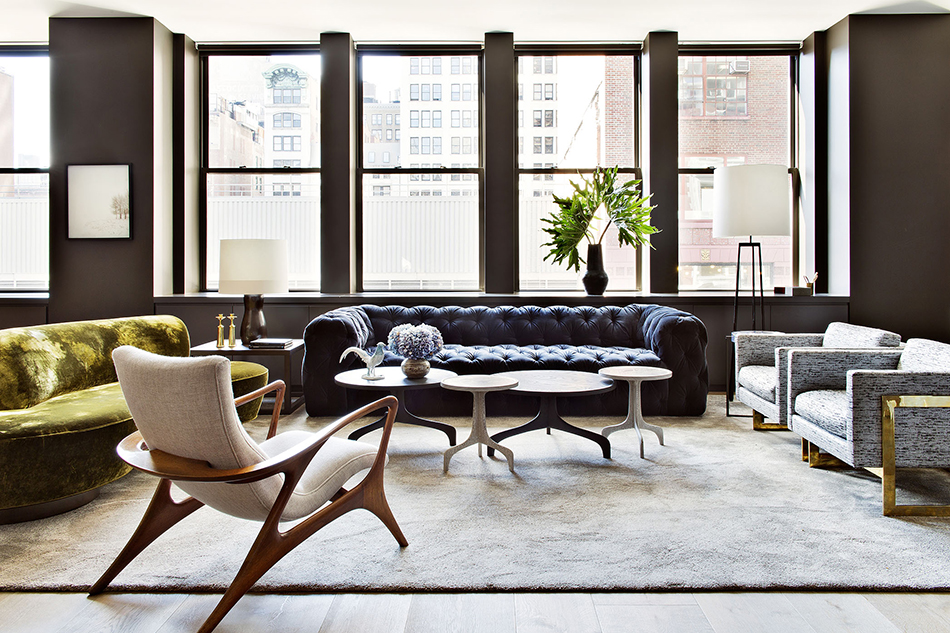 A wider view of the Park Avenue residence’s living room shows how Shah has created a harmonious composition of curving lines and rectilinear forms with a Kagan chair and sofa and Milo Baughman armchairs. Photo by Manolo Yllera 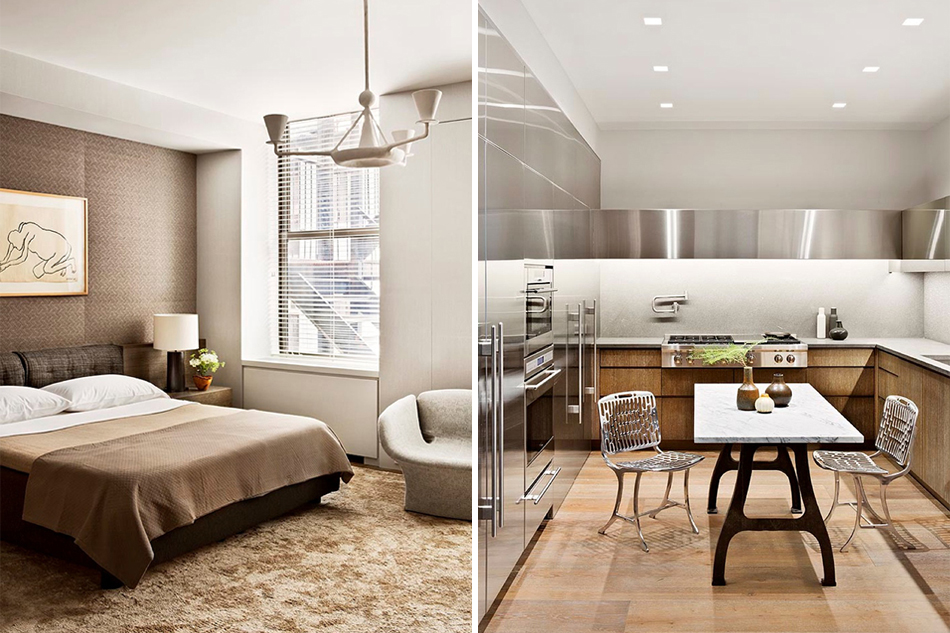 Soft brown tones add a warm but calming ambiance to the bedroom and kitchen of the Park Avenue apartment. Photo by Manolo Yllera 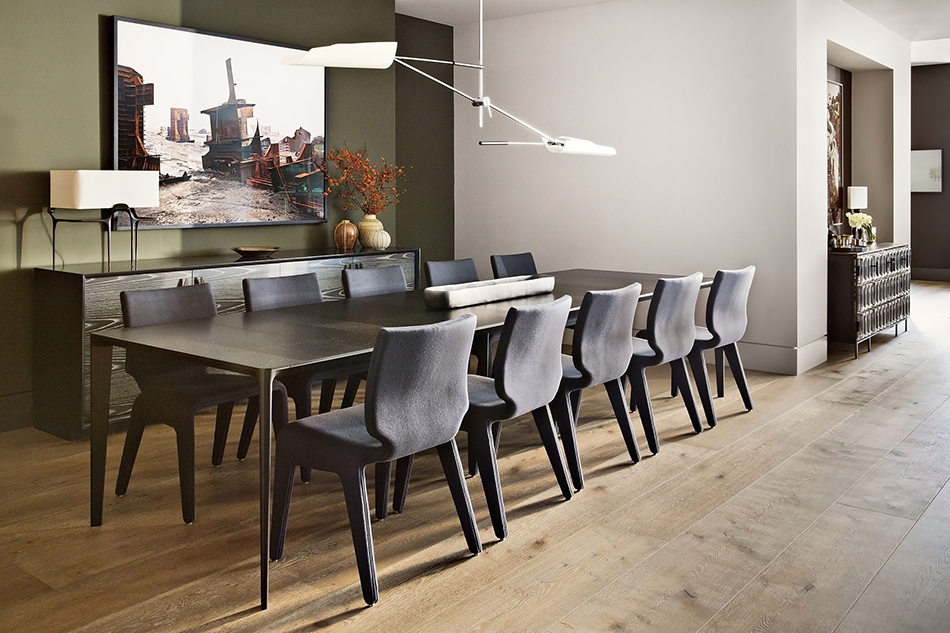 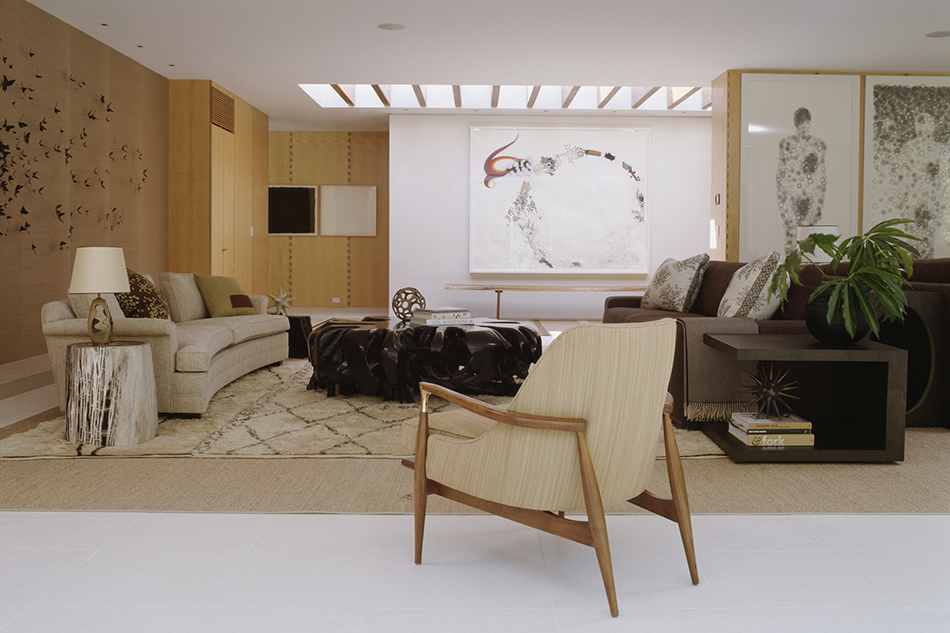 The living room of a house in Sagaponack, New York, is furnished with a vintage Edward Wormley sofa and a vintage Ib Kofod-Larsen chair from Flessas. Photo by Antoine Bootz 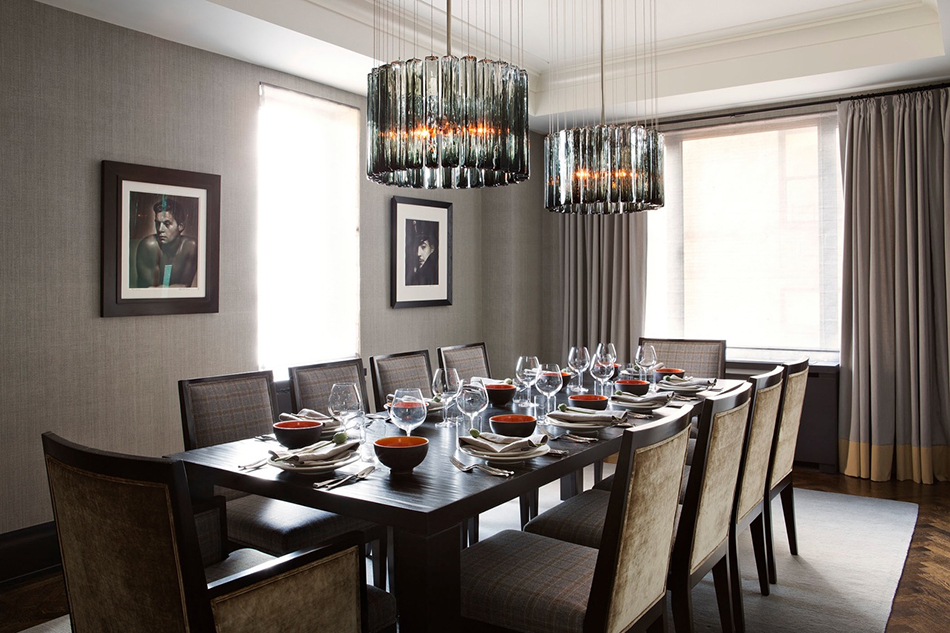 The dining room of a Central Park West apartment features a custom bamboo-top table by WYETH and dining chairs by A. Rudin. Photo by Manolo Yllera 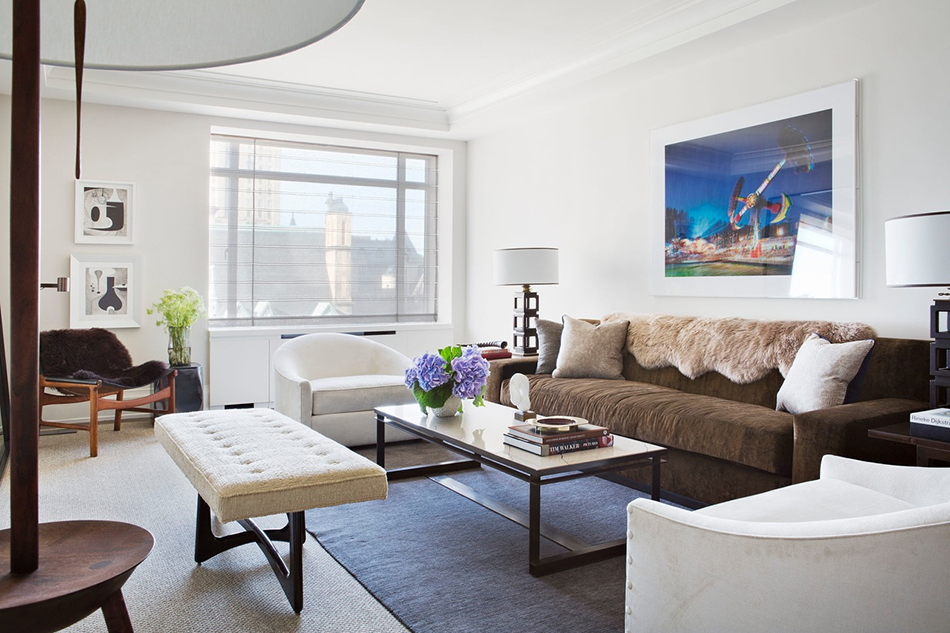 Shah selected vintage lamps from Van den Akker and a vintage bench at WYETH to add interest and rhythm to the Central Park West apartment. Photo by Manolo Yllera 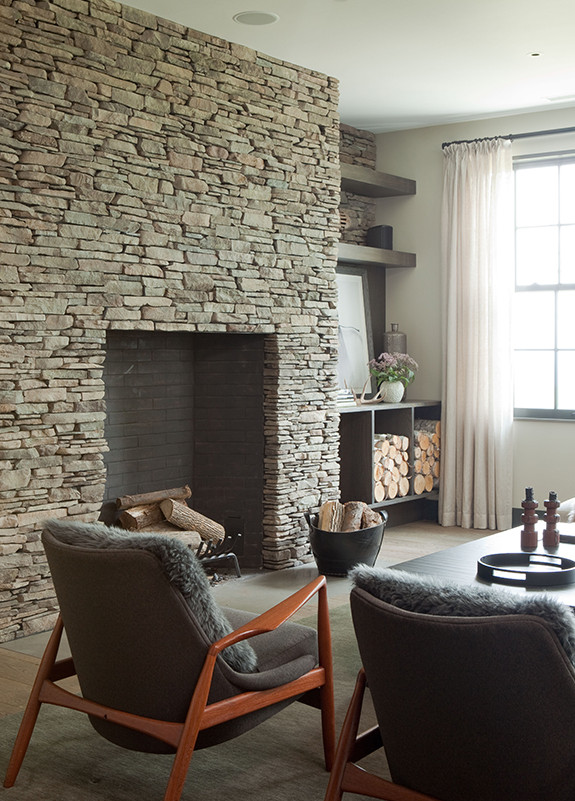 The living room of a Vermont ski lodge designed by Shah features vintage Ib Kofod-Larsen chairs. In his estimation, nothing compares to the simplicity and beauty of mid-20th-century Scandinavian furniture. Photo by Antoine Bootz

After graduating in 1987, Shah moved to New York and spent 12 years working for the architect-darling of developers Costas Kondylis. Because the city was in an economic slump, the enormous projects the firm specialized in were largely on hiatus. During this time, remembers Shah, “Several of Costas’s clients asked him to do smaller residential projects that he might not have done.” The company set up a satellite office across the street from its headquarters, and Kondylis put Shah in charge. The modest scale of projects and the one-on-one interaction with clients suited Shah’s more introverted sensibilities. But as bad times reverted to good and money was suddenly available again, the satellite office was absorbed anew into the larger firm and resumed its emphasis on major buildings. “That was the writing on the wall that it was time to go on my own,” he recalls.

Today, residential work remains the core of Shah’s business, but he works on commercial projects, too. Shah is nearing completion of Extell’s One Riverside Park, a condominium development on the Hudson River for which he designed the interiors. He has a similar brief for another Manhattan high-rise on lower Madison Avenue. And for an apartment tower in the Century City area of Los Angeles, he is designing all the amenity spaces — lobby and sales center, resident lounge and business center, theater, gym, spa and indoor and outdoor pools. “It’s the closest I’ll ever get to mass-market housing,” he says. “When you’re doing private homes, it’s very personal. Commercial work has to have a broader appeal, but also a point of view, which is a challenge I enjoy.”

As for Shah’s particular point of view, it has a lot to do with materiality. The architect is a fan of wood that is finished in ways that accentuate its natural texture and volume. It is more often chunky and scraped or chip-carved than polished to a high gloss. Though a project or two might include a Dogon ladder or a rare African mask, it is his admiration for the native beauty of materials and craftsmanship that best expresses his African upbringing. “We might work with craftsmen who are hand-tooling wood, hand-burnishing metal, crafting custom fixtures,” he says. 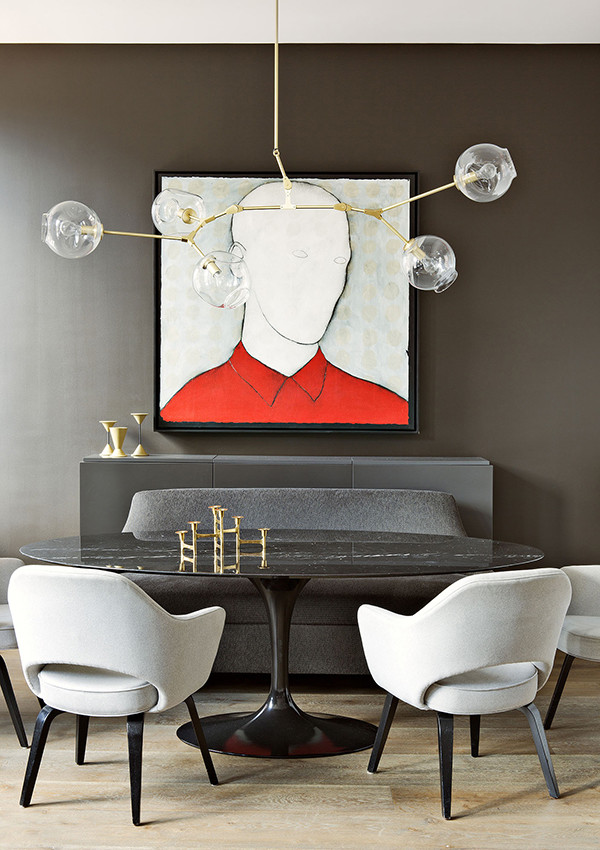 Shah prefers custom contemporary lighting for his interiors. In this Park Avenue apartment, he hung a chandelier by Lindsey Adelman above an Eero Saarinen table and chairs. Photo by Manolo Yllera

In Shah’s palette there is, he admits, “not much in the way of electric color.” And when it comes to outfitting a room, he explains, “I’m really interested in modern furniture and lighting. There was something the Scandinavians were doing in the mid-twentieth century that was so simple, no-nonsense and to-the-point, but still extraordinarily beautiful. The forms tend to be very fluid and organic. It stands the test of time and still looks thoroughly modern. I can’t think of a more successful design period in recent history.”

Shah and his partner of 19 years, the artist Malcolm Hill (whose work shows up in many Shah projects), split their time among their Chelsea apartment, a cabin on nine acres in Litchfield County, Connecticut, and Hill’s studio in a converted Swedish Lutheran church in Montana. They are avid outdoorsmen, often escaping into the African wilderness, taking bike tours through Burgundy or camping in the Wind River Mountains of Wyoming. It is how the couple mediates the sensory overload of New York. Nevertheless, Shah admits he still needs the stimulation of the city.

Which is why he feels it is so important to create environments that are quiet and contemplative as a counterbalance. “In the most basic sense,” says Shah, “creating a home is a very primordial need. We all need to be sheltered. This is possibly the most fulfilling aspect of what we do.” 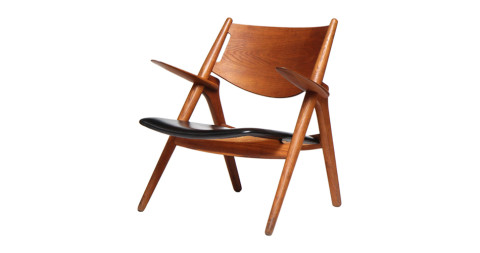 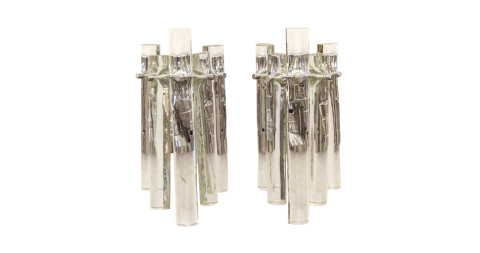 Kinkeldey was well known for its crystal. The combination with metal makes a good-looking light. 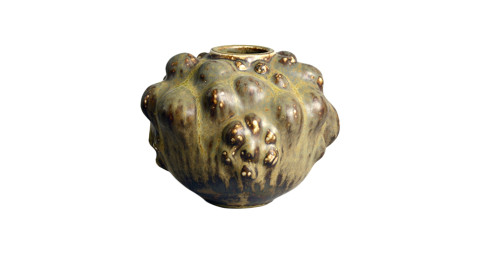 Salto was a master sculptor and also had a wonderful, subtle color sensibility. 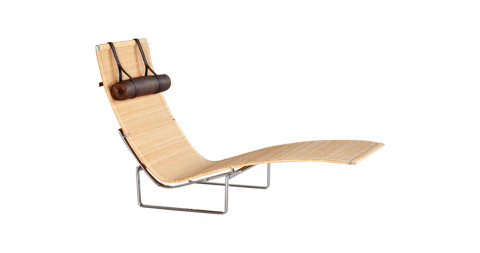 The simplicity of this fluid form is very unusual in cane and makes a timeless piece of furniture even 50 years after it was designed. The adjustable leather headrest has innumerable imitators but very few come close. 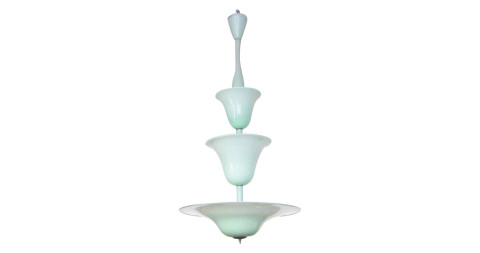 More a piece of sculpture than a light source. The company’s fluidity in this medium is quite remarkable. 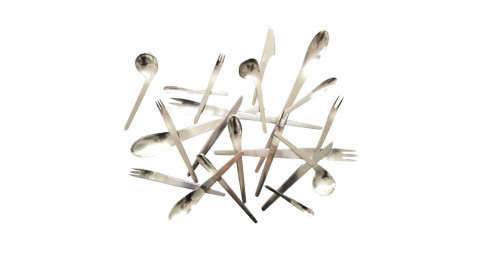 Shop Now
Arne Jacobsen Designed Flatware for 24 Made by A. Michelsen, offered by Jimmy Beyens

Clean organic lines inspired by natural forms, well balanced, this flatware is great to look at and comfortable in the hand. 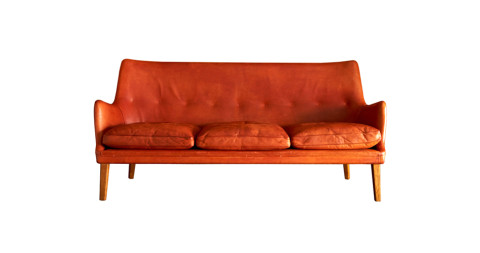 Clean modern elegance at its best. The leather has a beautiful patina that will only get better with time. 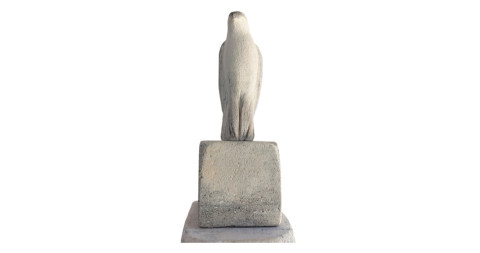 Reminiscent of a Brancusi totem. 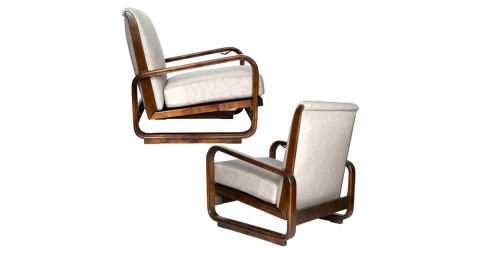