Colorful, Customizable STACKABL Furniture Is Good for the Planet, Too 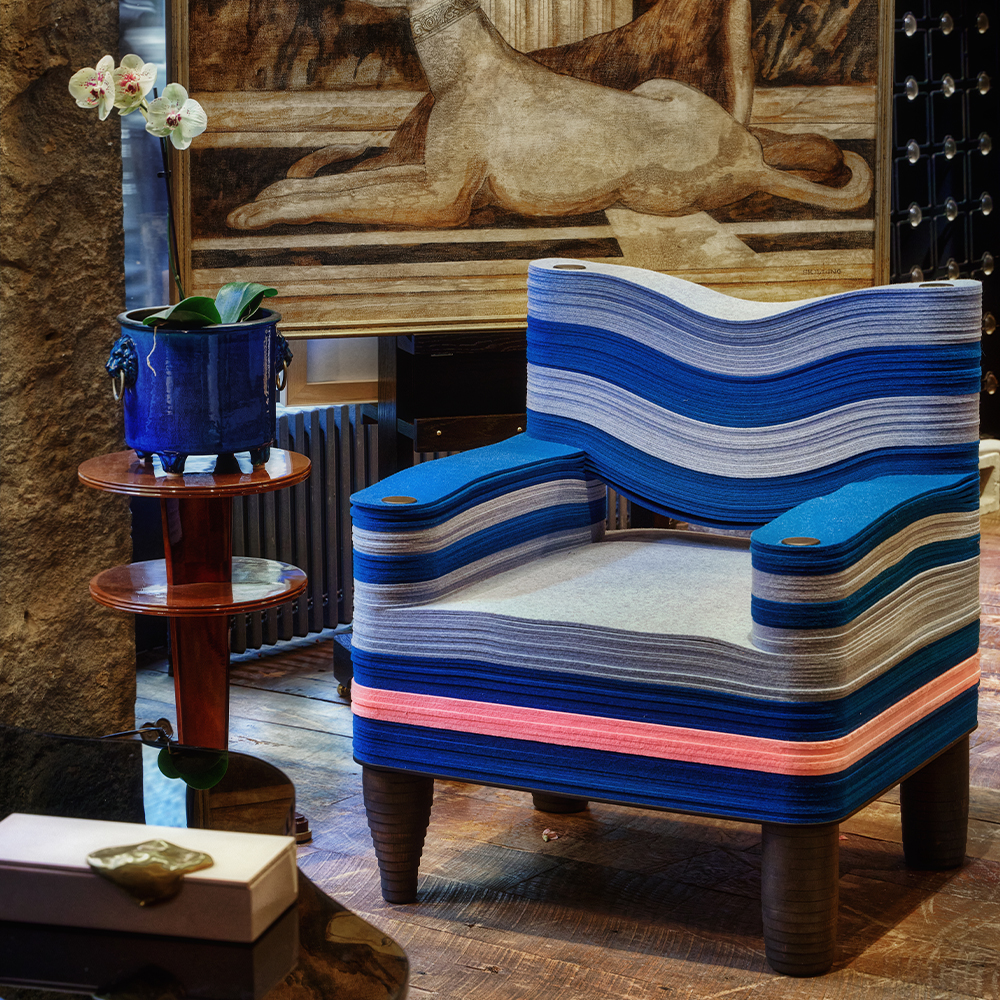 Assembled on demand from a rainbow array of surplus felt and other responsibly sourced materials, these innovative pieces point toward the design industry’s more sustainable future.

April 3, 2022Jeffrey Forrest, the 38-year-old founder of the multidisciplinary design studio STACKLAB, is taking upcycling to a level above next level. Mixing entrepreneurial savvy, technological wizardry and environmental advocacy, he has created STACKABL, a line of eco-friendly seating that lets anyone custom design colorful sculptural pieces made from stacks of surplus merino-wool felt, repurposed aluminum and sustainably harvested wood — all found within 150 miles of Forrest’s Toronto headquarters.

In collaboration with furniture gallery Maison Gerard and five prominent interior design firms, STACKABL has launched an inaugural collection available exclusively through Maison Gerard on 1stDibs. Customers can also create their own designs riffing on the pieces in the collection by submitting their preferences along with their order.

What sets the STACKABL project apart from other efforts to create sustainable furniture is the algorithm that Forrest developed to identify remnants available from local manufacturers, as well as the robotics those manufacturers use to custom create the pieces.

“I’m tired of designers starting with a form and figuring out what to make it out of and where,” says Forrest, who studied architecture at New York Institute of Technology and the University of Calgary. “Why not design in reverse? Contemplate a universe where we reduce waste and start the design process by understanding what materials are readily available and figuring out what is responsible and practical to make that can also power our local economies.”

Maison Gerard’s Benoist F. Drut, who has represented editioned STACKLAB designs since 2016, concurs. “This project allows you to create something new without adding to the misery of the planet,” he explains. “And they are beautifully finished products that don’t look homemade.”

Working with Drut, Forrest commissioned six STACKABL pieces from interior designers Alexandra Champalimaud, Jamie Drake and Caleb Anderson, Laura Kirar, Elena Frampton, and William Georgis and Ilya Mirgorodsky, as well as Drut himself, that prove sustainability can be accessible and chic. Each piece is available in a number of variations with different dimensions.

Although Drut has produced furnishings for Maison Gerard — which offers French designs by Jacques Adnet, André Arbus, Jean-Michel Frank, René Lalique and Maison Jansen, along with contemporary art furniture — he says it would be a stretch to call him a designer. Nevertheless, he played fearlessly with STACKABL’s materials and colors.

His creation, the Maxine bench, is named for his dog. “My first love was eighteenth-century French design, where the legs of benches are symmetrically identical,” he says. “But here, I used three differently shaped legs to show how to be funky within boundaries.”

Drut also referenced Memphis design, particularly the work of Ettore Sottsass, and says he stacked six colors of felt “to create a Missoni effect.” Upon seeing Drut’s design, Forrest quipped, “He went bananas and showed how fun it could be.”

“The idea of a sustainable piece was riveting,” says Champalimaud, known for her sumptuous interiors for scores of international restaurants and hotels, including the Plaza in New York and the Beverly Hills Hotel. “I enjoyed the process, which was also very effective. We were able to create our vision almost instantly.” She enjoyed it so much that she submitted nearly a half dozen versions of her Raki corner chair.

“I love the asymmetry of Alexandra’s design,” says Drut. “The shape was inspired by a Carlo Bugatti chair, but the proportion is much more generous, and there’s a regal aspect to it.”

“Her piece is austere, with a serious palette, and I wanted to show that the system can do that,” Forrest notes. “You don’t have to use it only to go wacky wild.”

Sporting a back made from unglued felt layers that drape elegantly under their own weight and conform to the user’s body, Frampton’s piece is influenced by Los Angeles car culture and Superstudio’s 1960s SOFO chairs.

“By virtue of its color and pattern, Fast Lane is a focal point within a room,” she explains. “It would pair well with artist Nick Missel’s sculptural cubes to make a bold statement or Jean-Marie Massaud’s smoked-glass coffee table for a more subtle but still edgy vibe.”

Drake and Anderson concentrated on creating a bold chaise that, they say, “conveys an invitation to recline, to embrace languor, romance and repose.”

Their Madame, in lipstick red and shocking pink, is a reference to Madame de Récamier, who famously posed on a chaise for a portrait by Jacques-Louis David, and Mme Elsa Schiaparelli, who popularized that particularly bold pink shade of pink.

“It looks very playful at first glance but then immediately registers as a serious piece of furniture rooted in history,” says Forrest. Drake adds that “it would look marvelous with a low, black cashew-painted table and a 1970s Murano-glass floor lamp by Gae Aulenti.”

At Maison Gerard, Drut showcases the STACKABL designs in dialogue with one another and with the gallery’s signature mix of antiques and contemporary pieces, including an early-20th-century burlwood cabinet in the Vienna Secession style, a rare T.H. Robsjohn-Gibbings coffee table, Achille Salvagni’s 2018 Masai shelving and Alexandr Zhikulin’s 2016 patinated-steel side table. “All these pieces can coexist,” Drut enthuses. “It’s a happy melting pot.”

Drut has embraced such eclecticism ever since he exhibited the work of Hervé Van der Straeten amid the gallery’s French Art Deco collection more than two decades ago. “What was avant-garde then,” he notes, “is mainstream today.”

He felt the same way when Forrest showed up unannounced at Maison Gerard in 2016 with the Garrison, a stool/table made of metal salvaged from a demolished Canadian bridge.

“I liked Jeffrey’s directness,” Drut says. “Whenever I work with a living artist, it has to be fun or I just go back to antiques.” Together, the Canadian designer and the French gallerist plan to expand the STACKABL offerings to include new furniture and lighting.

“Design should always be a reflection of what’s going on,” says Forrest, who conceived STACKABL during the pandemic. “In lockdown, we all got a little sick of our homes. So, it’s delightful to create something to help people do a good deed for the environment and express themselves colorfully, with a bit of whimsy.” 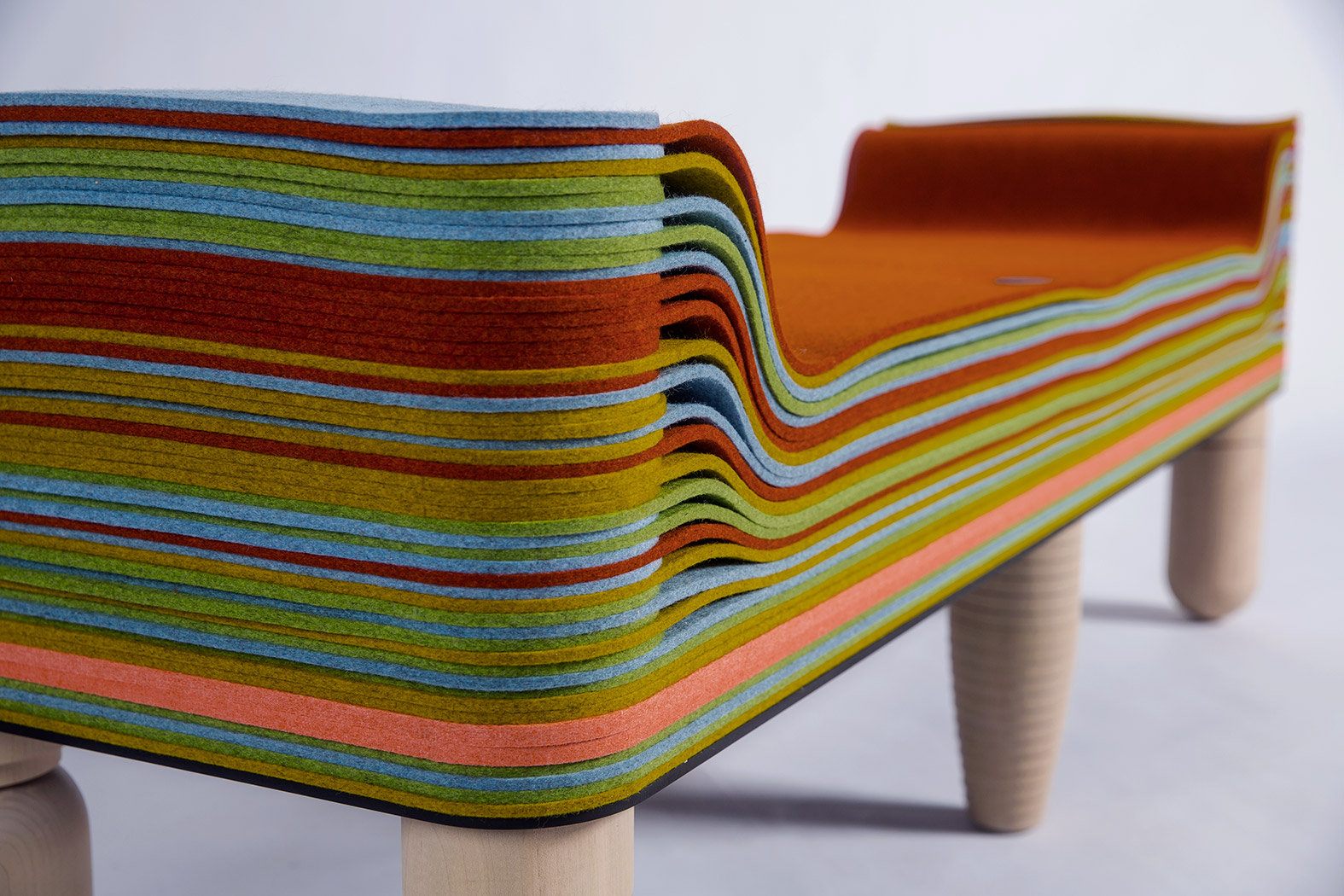