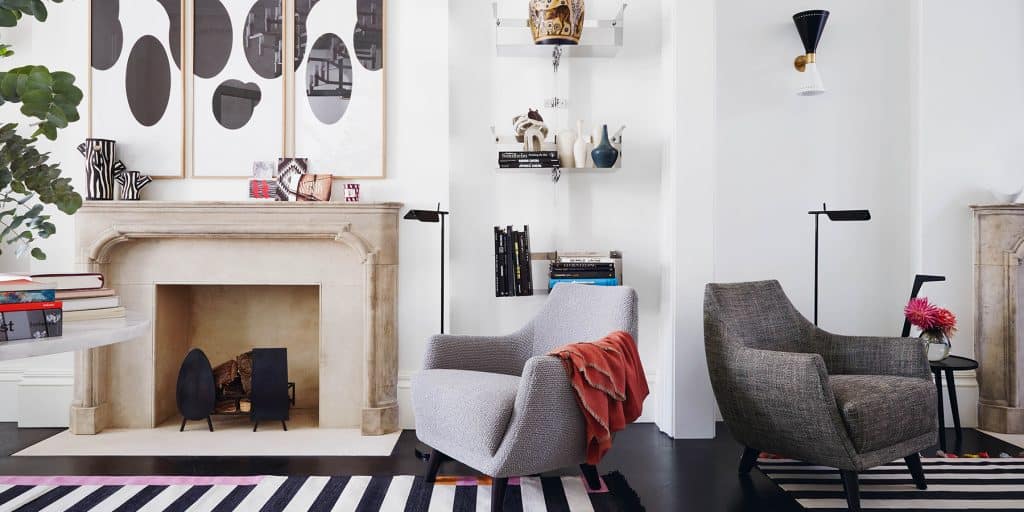 The former magazine editor is known for her dramatic designs and impressive organization. 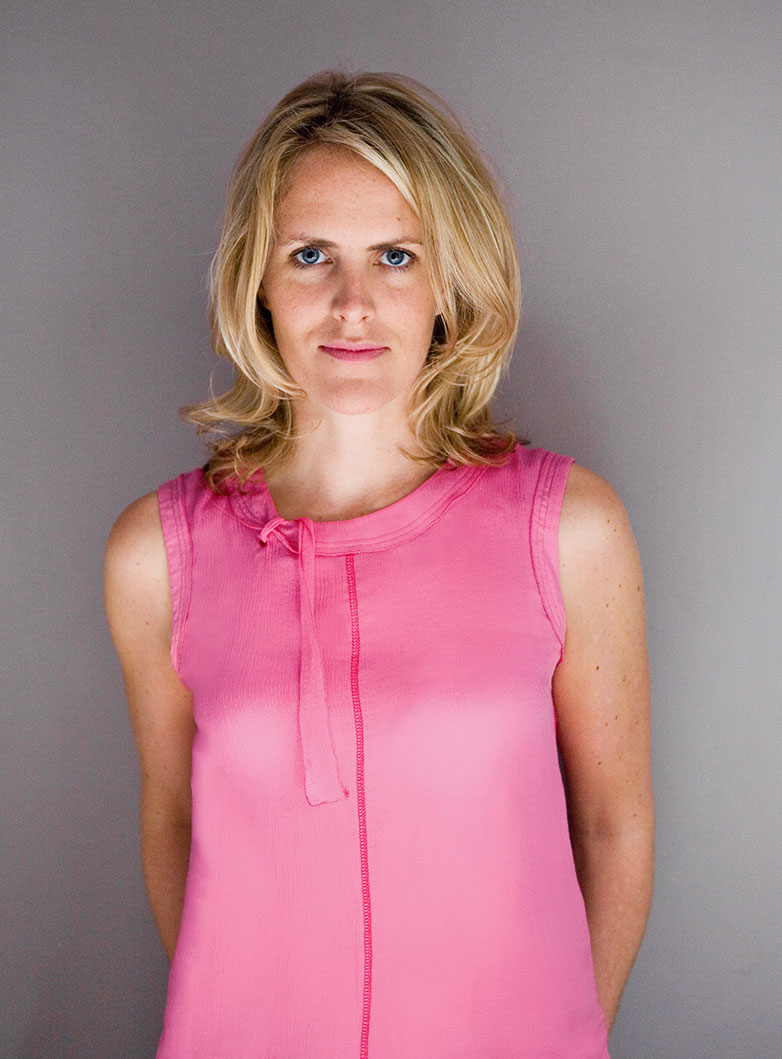 March 12, 2018Designer Suzy Hoodless aims to imbue her spaces with a sense of humor. Top: A stone fireplace from Jamb adds a historic touch to this Notting Hill townhouse. Photo by Lucas Allen

Interior designer Suzy Hoodless has an archive of some 40,000 images on her computer. They are photos she has taken and kept as potential inspiration for her projects. “I have this weird memory where I can easily recall them,” she says, sitting at a long table on the first floor of her Notting Hill showroom. “I’ll think, ‘I need to find that photo I took at MoMA in New York. It must have been twelve years ago.’ ”

Hoodless’s career got off to a bang shortly after she opened her firm, in 2000. The model Erin O’Connor hired her to decorate a Georgian townhouse in London. That project was never published, but two other commissions gained considerable press attention. The first was the Hospital Club, a private members’ club located in an old Victorian hospital in Covent Garden. There, her eclectic, whimsical decor includes cartoon-like drawings of the Kama Sutra in the restrooms and custom wallpaper with illustrations of 1940s pinups, butterflies and foliage.

Even more impressive was her work on several buildings on an estate in the Highlands of Scotland. The main house is a contemporary structure with dramatic angular windows by the Israeli-born architect Moshe Safdie. Inside, Hoodless mixed 20th-century vintage furniture by Ole Wanscher, Josef Frank, Jean Prouvé and the like with 18th-century Swedish fireplaces and a tapestry that once belonged to Marie Antoinette. She also transformed the former cook’s cottage into a guesthouse, using doilies as lampshades and covering the bedroom walls with some 2,000 19th-century postcards. Then there’s the children’s dormitory, which she conceived with climbing nets between some of the beds. “It became a sort of adventure playground,” she says. “I doubt any child has had a wink of sleep in there.” 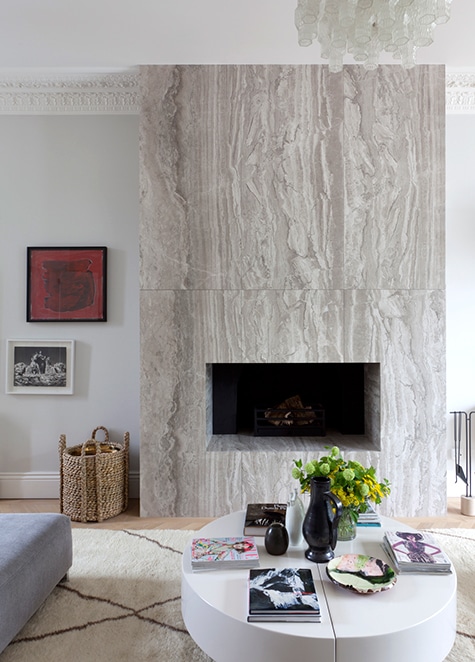 In this Kensington townhouse, Hoodless added a floor-to-ceiling stone fireplace to an otherwise classic space with timber chevron flooring. A Venini chandelier hangs from the ceiling. Photo by Antony Crolla

Some 15 years later, Hoodless is still going strong. For the past three years, she has been engrossed in another high-profile project: the transformation of the BBC’s former West London headquarters, Television Center, into a 1,000-flat residential development. The complex will also encompass a Soho House hotel and members’ club, a fitness center and artisanal shops and cafés. Hoodless’s involvement has included designing a communal work space, a screening lounge and several model apartments, whose decor incorporates Charles and Ray Eames‘s DSW chairs, Danish mid-century furniture and bathroom tiles inspired by a motif created in the 1950s by Edith Heath, founder of Heath Ceramics.

Growing up in the London district of East Sheen, Hoodless was constantly rearranging her bedroom. “I was trying to create a series of different spaces inside one very average-sized room,” she says. “I was always moving bookshelves to create little corridors or hanging textiles as partitions.” She enrolled to study fine art at Manchester Polytechnic (now known as Manchester Metropolitan University), in northern England, but dropped out after only a few weeks. “I remember walking down the road,” she says, “carrying my jacket potato and baked beans and thinking, ‘I’m not going to spend the next few years living like this, in miserable poverty.’” Instead, she made her way back to London, learned how to type and got a job as an assistant on the creative team at Tricia Guild’s now legendary textile and wallpaper firm, Designers Guild. “It was my formative education and much better than the degree I would have got,” she says. From there, she did internships at magazines like British House & Garden and embarked upon a career as a freelance stylist. One particularly pleasant memory was collaborating on the third volume of Ruth Rogers and Rose Gray’s River Café Cookbook. “That was definitely the best job I ever had,” she says. “I spent two days eating delicious food.” 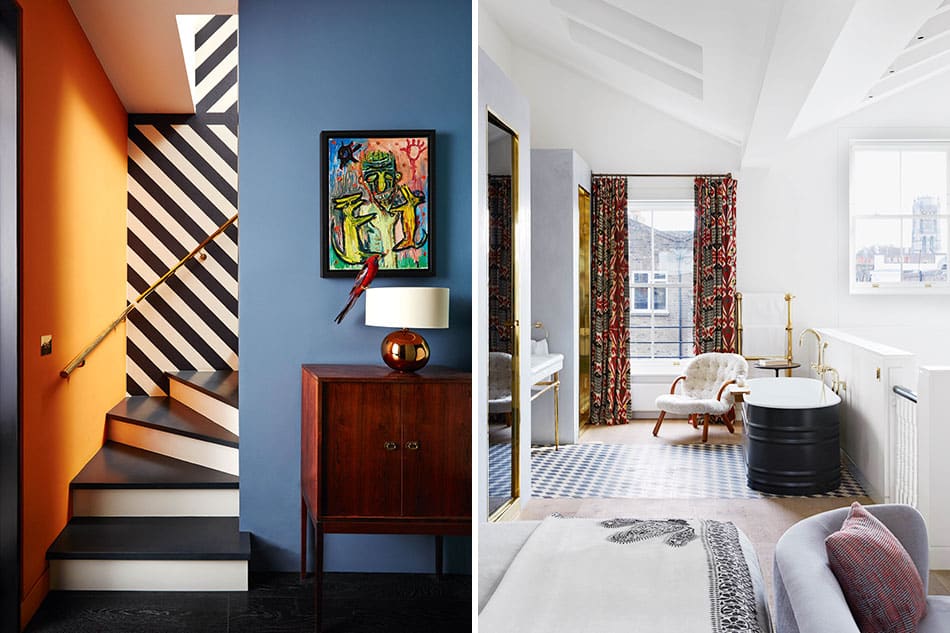 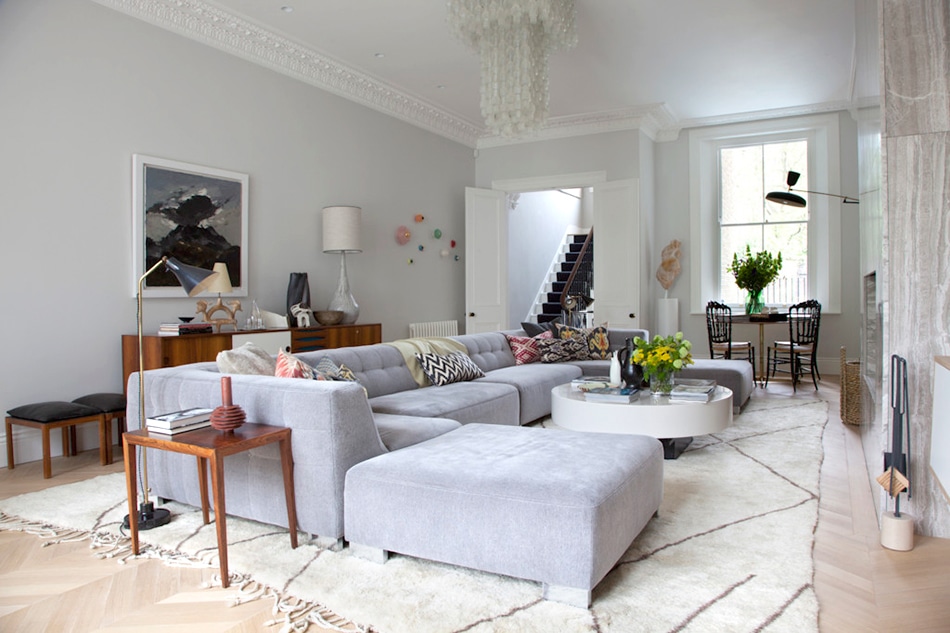 The living room of a Kensington, London, townhouse includes a Ligne Roset sofa and a 1970s French coffee table. Photo by Antony Crolla 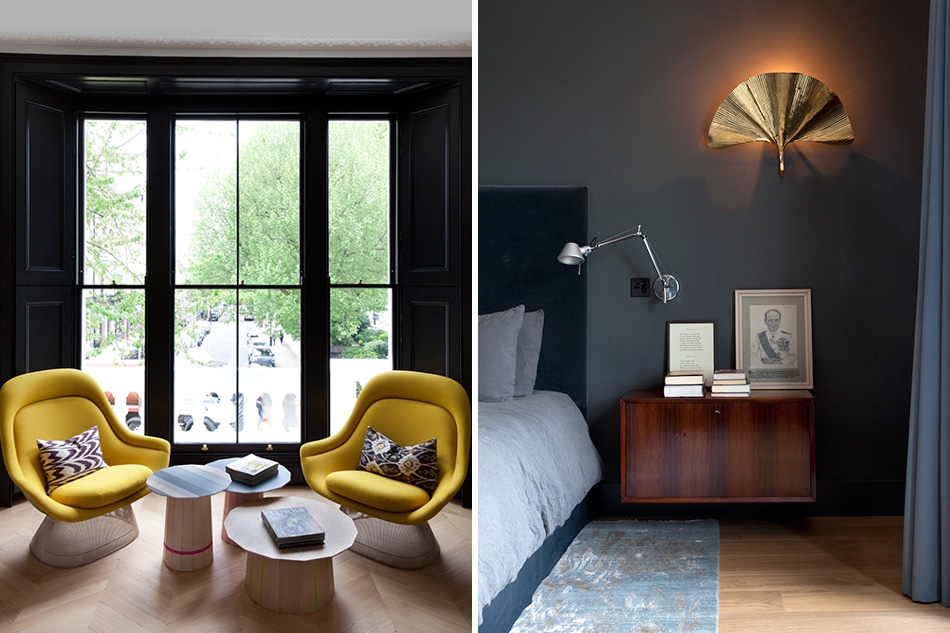 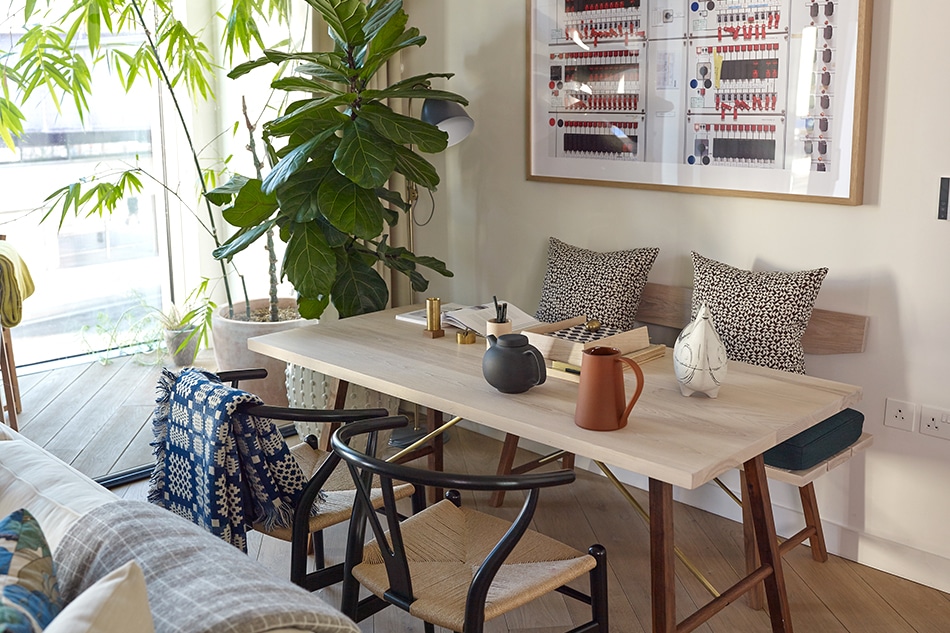 A flat at Television Center, in West London, is outfitted with a dining table and bench by Another Country and a pair of Hans Wegner Wishbone chairs. Photo by David Brook 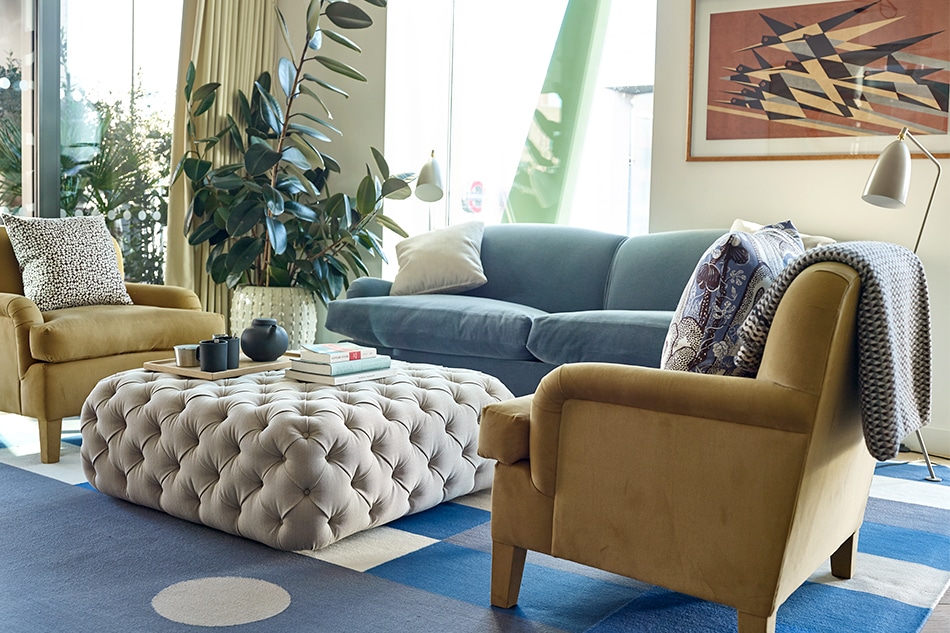 The living room of a flat in London’s Television Center includes seating by George Smith and a Gubi Gräshoppa lamp. Photo by David Brook 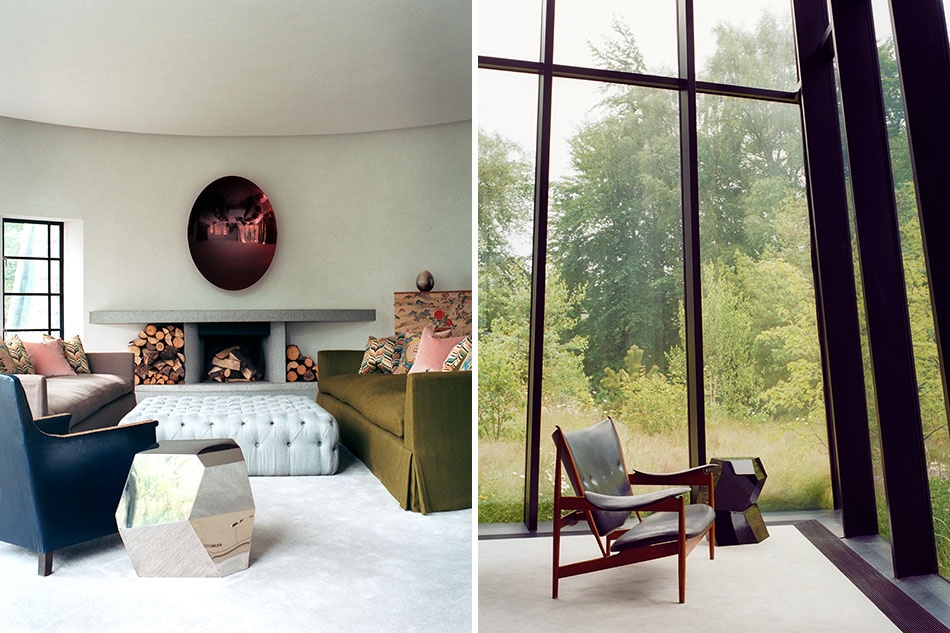 Left: A sculpture by Anish Kapoor hangs over the fireplace in this circular living room in Scotland, which features a pair of bespoke curved sofas and rugs. Right: Hoodless made a comfortable family home within architect Moshe Safdie’s granite, glass and steel structure. Photos by Tom Mannion 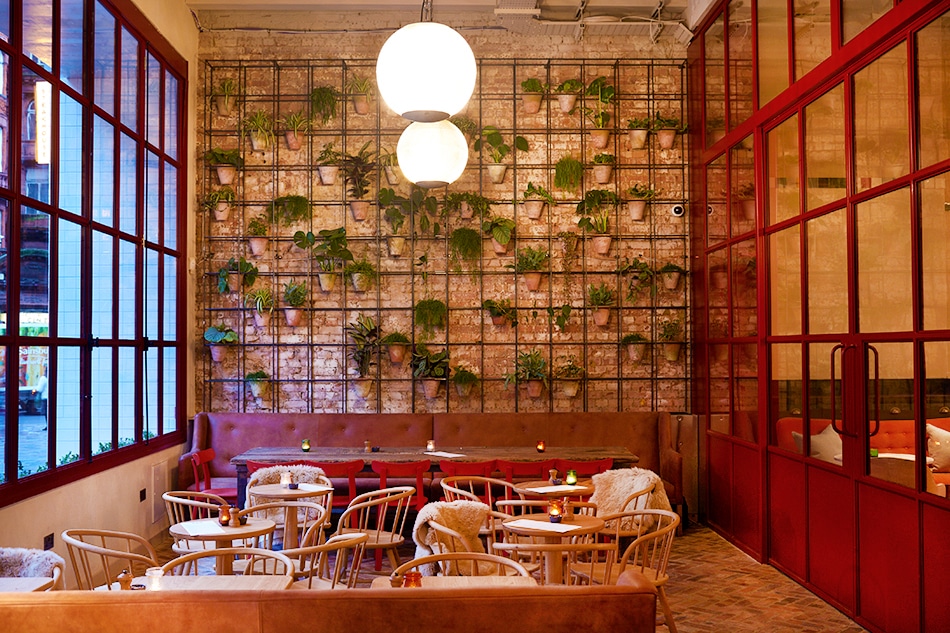 At London steakhouse Sophie’s, Hoodless created this airy space with a wall of potted plants, a brick floor and rustic tables and chairs by Another Country. Photo by David Loftus 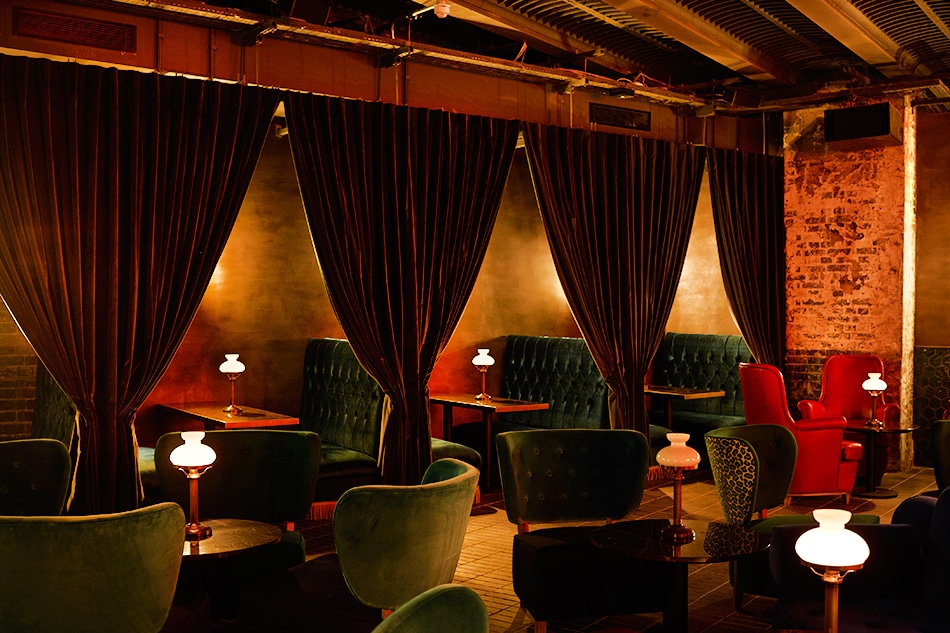 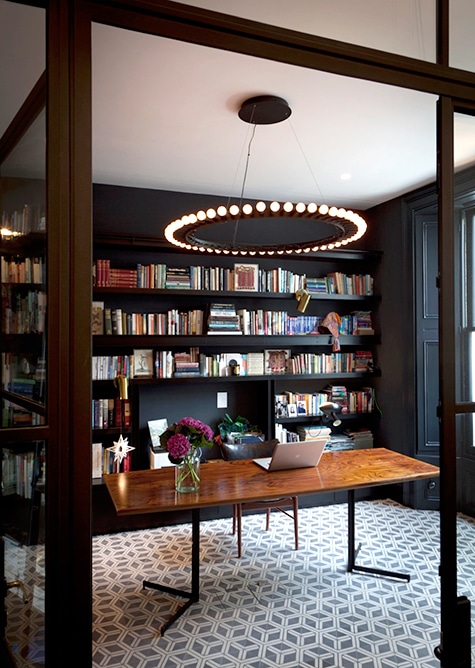 The library of the Kensington townhouse is located off the entryway, so Hoodless replaced the wall with steel windows to create a sense of openness. The space features a 1950s walnut desk by Franco Campo & Carlo Graffi and bold geometric floor tiles. Photo by Antony Crolla

Her big break came in 1996 when she was introduced to Tyler Brûlé as he was about to launch the trailblazing magazine Wallpaper*. “Suzy’s father told her it would amount to nothing and that it was a waste of time,” recalls one of the magazine’s cofounders, Paul de Zwart, with a chuckle. Fortunately for Hoodless, she ignored the parental advice and accepted the job of interiors editor, which largely involved traveling around the globe attending furniture fairs and curating shoots.

Hoodless’s first decorating project came when an acquaintance, an American accountant, asked her to outfit an apartment she had bought near London’s Westbourne Grove. “I thought, ‘Well, I know where to get everything,’ ” Hoodless says. “It seemed like a natural evolution.” Her aesthetic has remained constant ever since: She has a love of mid-century modern pieces, with a particular fondness for Scandinavian design. “I like the warmth of the wood and its contrast with the cleanness of the lines,” she says. She also often incorporates pops of bright color and bold black and white stripes. “I want there to be a sense of drama and theater and excitement.”

“Suzy’s always looking for the unexpected,” notes British rug designer Christine Van der Hurd, with whom Hoodless regularly collaborates. “She’s constantly pushing the boundaries.” That can come by way of a dose of humor. In the basement playroom of a townhouse in Kensington, London, for example, she decorated a set of wardrobe doors with a quirky mural of parading elephants and monkeys hanging from trees. At other times, she simply throws something unexpected into the mix. In the sitting room of another London residence, she says she juxtaposed a “dramatic, midnight blue, geometric” Kelly Wearstler wallpaper with ikat-print curtains. “Doing something surprising is a good way of making interiors feel relaxed.”

Hoodless has a laid-back attitude and a wonderfully dry sense of humor, but she also applies an impressive focus to her job. She’s a great believer that there’s no time to waste — a philosophy that helps her balance her career with life as a mother of three (she insisted we meet before 3 p.m. so she could pick up her kids from school). “There’s not a minute that’s not productive,” she says. “Every second has to be accounted for.” That translates into a business that functions like a well-oiled machine. “She brings investment-banking levels of organization to an industry that can be complete chaos,” says fund manager Anne-Christine Farstad, a client for whom she designed a house in Islington, London. “She’s totally brilliant.” 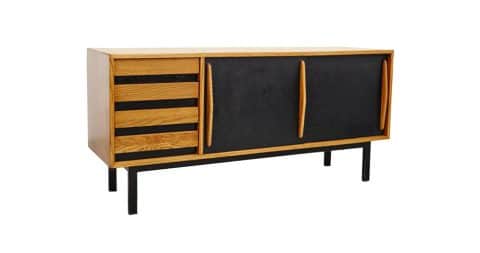 “This piece by Charlotte Perriand marries simplicity, practicality and perfect proportions. Elements such as the curve of the handle typify her attention to design detail.” 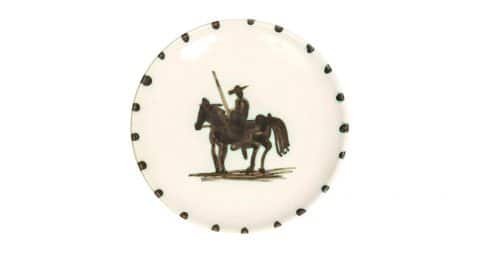 “Picasso’s ceramics are full of vigor and energy — such masterful brushstrokes, and more affordable than one of his paintings.” 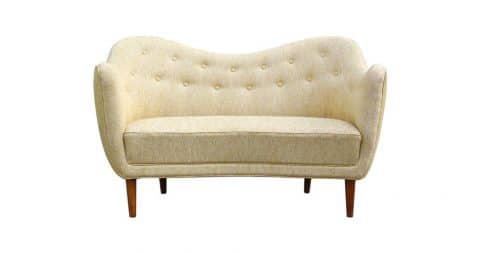 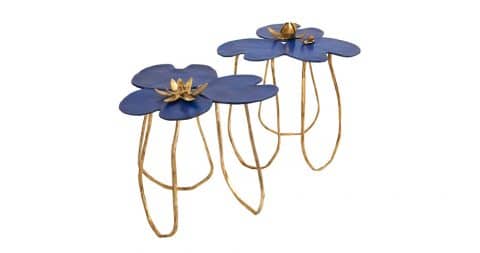 “Paula Swinnen’s contemporary metalwork designs are a striking interpretation of nature. The colors she uses are bold and work well in our confident interiors.” 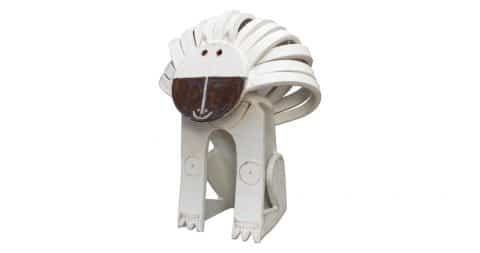 “No Suzy Hoodless interior can be without a touch of humor. We love Gambone’s animal sculptures, in particular his lions, which cannot help but raise a smile.” 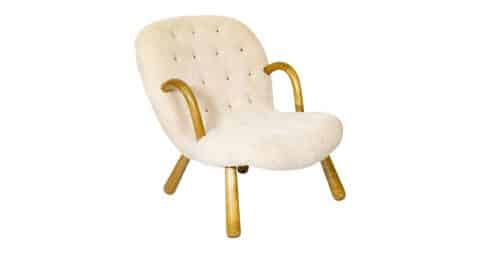 “All our interiors have to be comfortable as well as good-looking. We have used this sheepskin Clam chair by Philip Arctander in a number of locations, but our favorite was beside a deep bath in a loft-style bathroom. Perfect.” 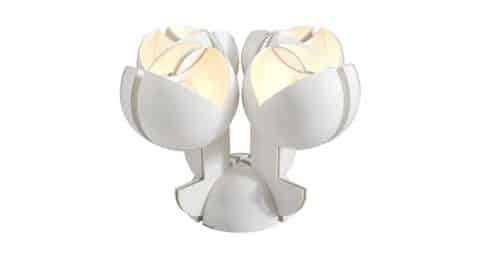 “Decorative lighting is so important in a space to add a warm glow and create atmosphere. This 1960s Italian lamp adds a pop of vintage glamour.” 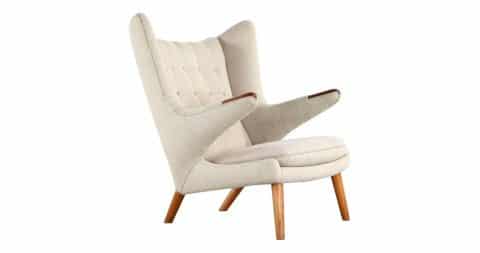 “A design classic that we never tire of using”