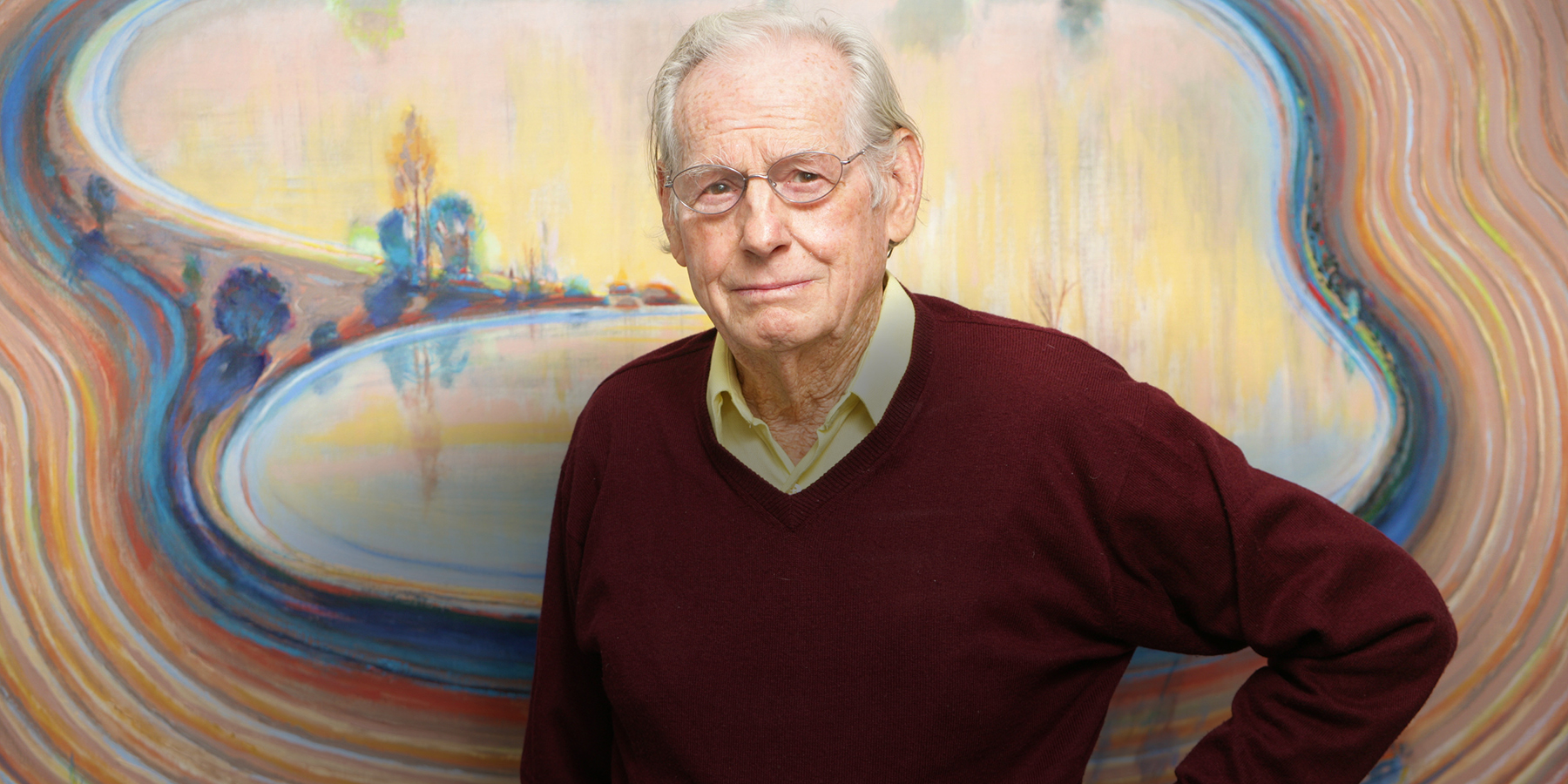 The Sweet Life of Wayne Thiebaud

The celebrated nonagenarian artist — long known for his mouth-watering paintings of sugary confections — is the subject of a career-spanning retrospective at New York's Acquavella Galleries. 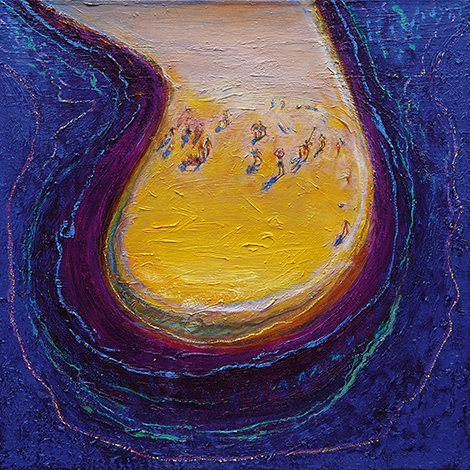 Lands End, 2007/2014, is one of 46 works by American painter Wayne Thiebaud on display at New York’s Acquavella Galleries through November 21. Top: The nonagenarian artist, depicted in a recent portrait by Mary Weikert, says he “can never escape” the association between his painting and dessert. All photos © Wayne Thiebaud/Licensed by VAGA, New York

Even at 93, and, indeed, just weeks shy of his 94th birthday, Wayne Thiebaud is not content to rest on his substantial laurels. Not only does the acclaimed artist still paint almost every day, he persists in trying to shake up his practice, looking for a challenge. “I try and develop new problems — color relationships, spatial dynamics — pretty academic stuff,” he reports by phone from his base in Sacramento, California, adding with a laugh: “Just because it’s new doesn’t mean it’s good, of course.”

Fans of Thiebaud’s iconic paintings of cakes, pies and other delectable desserts need not worry: The subject matter that has preoccupied him since the late 1950s continues to dominate his thoughts. An exhibition of his paintings and drawings, spanning more than 50 years, is taking up two floors of Acquavella Galleries’ grand New York town house, on East 79th Street, through November 21. While sweets are in abundance — “I can never escape that,” the artist says — the show also offers a welcome opportunity to take in his portraits, landscapes, cityscapes and whimsical beach scenes.

In several instances, Thiebaud has completed a piece that he started and then set aside years, or even decades, before. Begun in 1971 and not finished until 1994, the portrait Art Historian, for example, depicts a goateed man, his eyes cast downward at the small canvas he is holding, which is discreetly turned away from the viewer. In another instance, Thiebaud started Tapestry Skirt, representing a seated woman wearing a long patterned skirt, in 1976 — but waited 37 years to declare it done, in 2013. “You try to keep the works from embarrassing you, if you can,” Thiebaud says in his typically folksy manner. “Sometimes you just destroy them, but there’s always a chance you can do something to bring them along.” 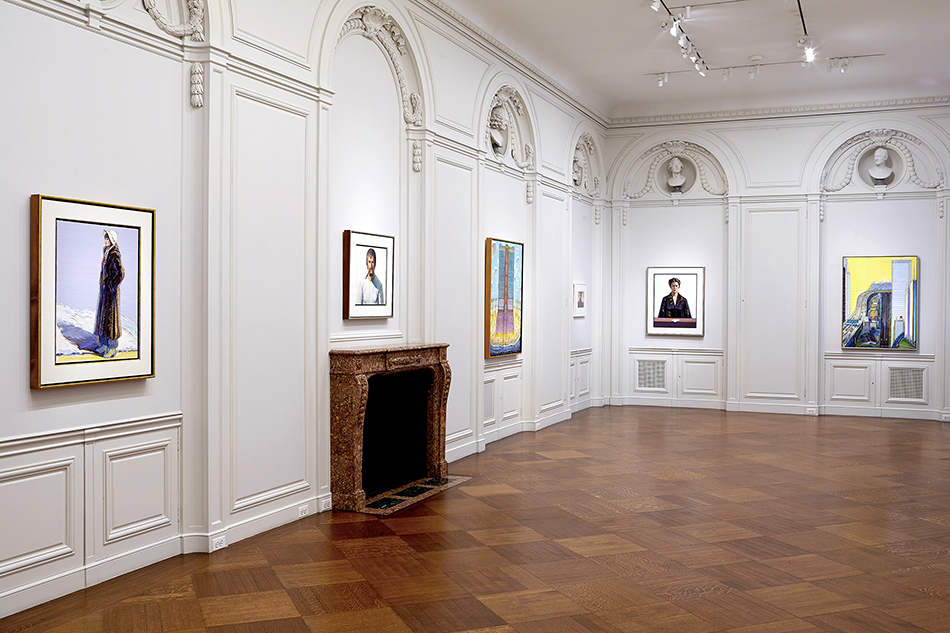 The retrospective, which includes a wide range of work going back to the 1950s and extending through today, takes up two of the five floors of Acquavella Galleries’ French neoclassical town house. 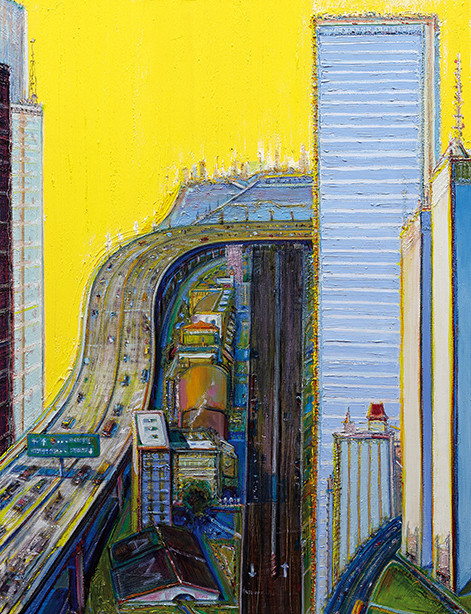 Alongside portraits and the artist’s trademark paintings of desserts, the show also features depictions of urban landscapes, such as Morning Freeway, 2012–13.

Born in Arizona and raised in California, Thiebaud apprenticed as a cartoonist at Walt Disney Pictures and worked as an Army artist during World War II. In the 1950s he began teaching, eventually landing at the University of California, Davis, where he would go on to instruct legions of young artists. (He still teaches on occasion, confessing that “it gives me a laboratory. I steal from the students.”) He admired the Abstract Expressionists, and while on sabbatical in New York in the mid-1950s, he befriended Willem de Kooning and Franz Kline. But during that eventful period, he was also taken with the younger generation rebelling against Ab Ex, including Jasper Johns and Robert Rauschenberg. One day he made a fateful drawing of a pie in a restaurant display case. The rest, as they say, is history.

Thiebaud’s dessert paintings, while typically lumped in with Pop art because of their mass-culture subject matter, bear more than a passing resemblance to Ab Ex canvases, their oil paint laid on as thick and creamy as, well, frosting. The ocean’s waves in Surf Dog, 2008 are essentially three-dimensional: The viewer almost expects to be sprayed with sea foam. For his part, Thiebaud maintains that most Pop artists favored a more mechanical style, while his work was unabashedly handmade. “I was absolutely thrilled that people would call me anything, but I didn’t feel connected to Pop artists as a group,” he says.

At the same time, the simple geometric shapes on his canvases — cylindrical cakes, triangular wedges of pie, rectangular layered pastries, as well as the reductive, colorfully outlined, display cases in which they’re often shown — hint at minimalism. And Thiebaud can be cheeky too: Some of his treats, topped with cherries, could easily be mistaken for breasts.

“I was absolutely thrilled that people would call me anything, but I didn’t feel connected to Pop artists as a group.” 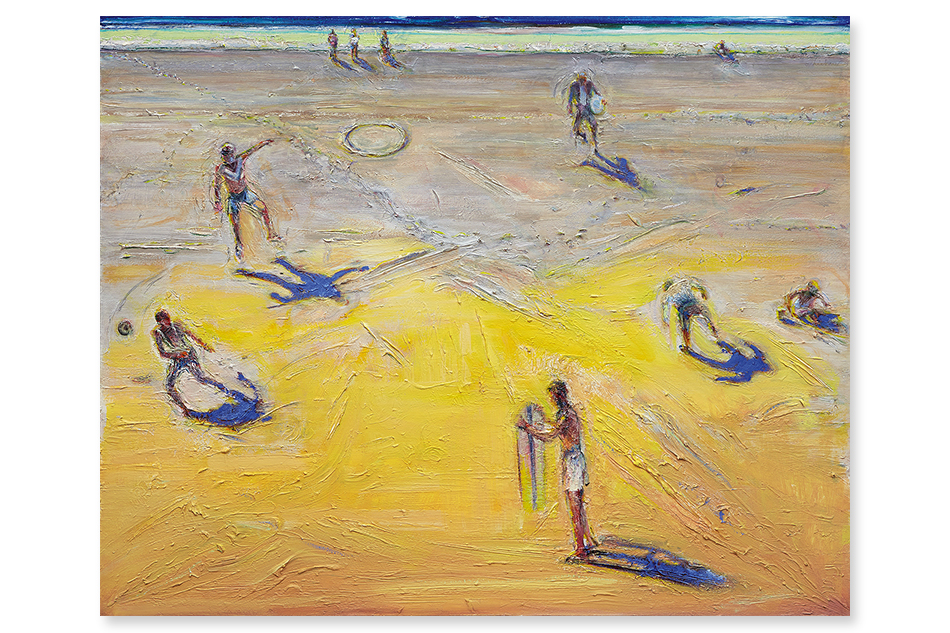 Such works as Nine Beach Figures, 2003/2005, harken back to the artist’s childhood in Long Beach, California. 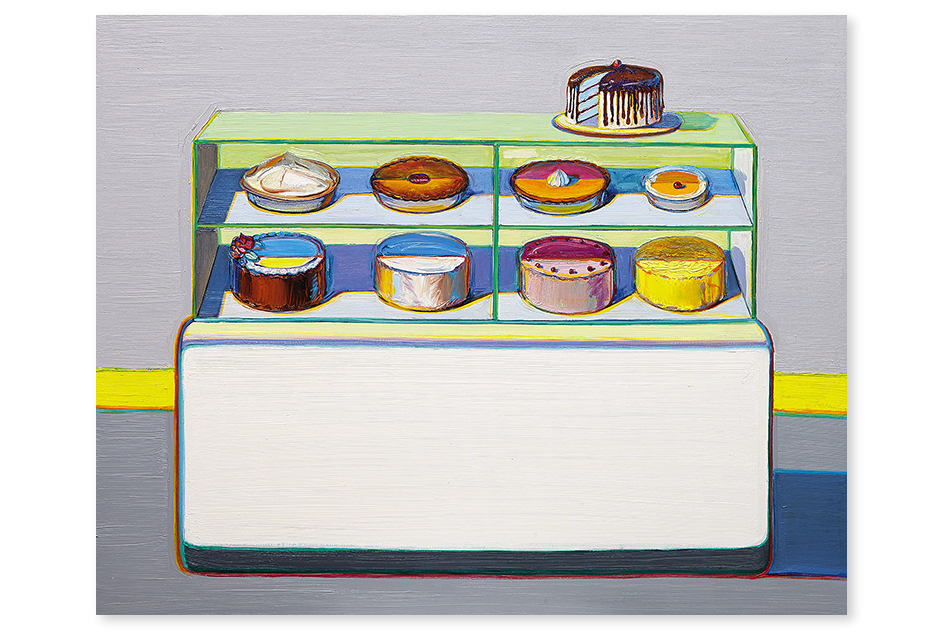 Works like Cold Case, 2010/2011/2013, reveal the artists ongoing interest in confectionary delights — an interest he has never been able to shake. 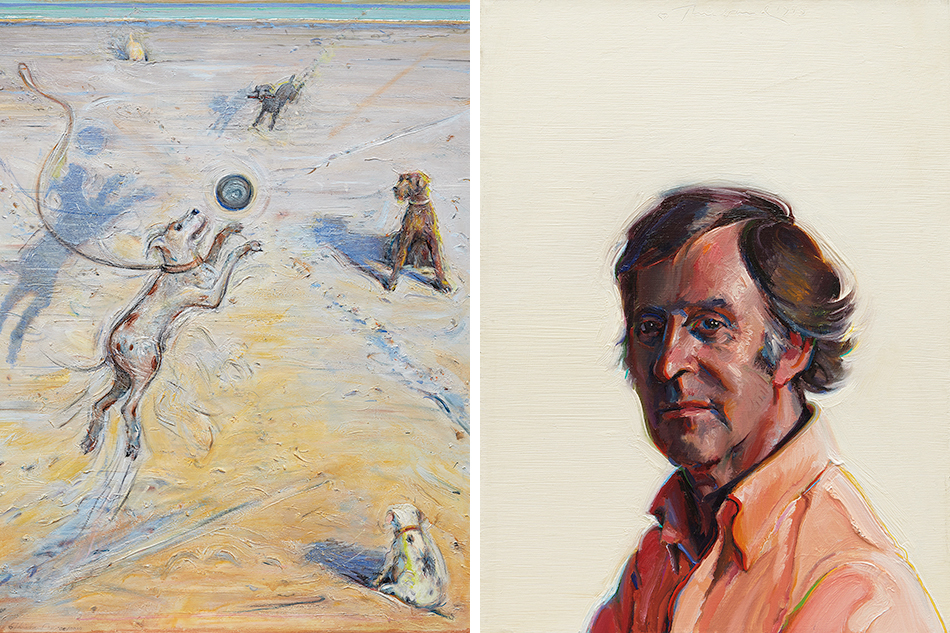 Left: Beach Dogs, 2004–10, shows Thiebaud’s richly textured painting style, which many critics attribute to the early influence of Ab Ex artists including Willem de Kooning and Franz Kline. Right: The subjects of Thiebaud’s portraits, including Man in Orange Shirt, 1975, are often depicted against a neutral background and wearing what might be described as inscrutable expressions. 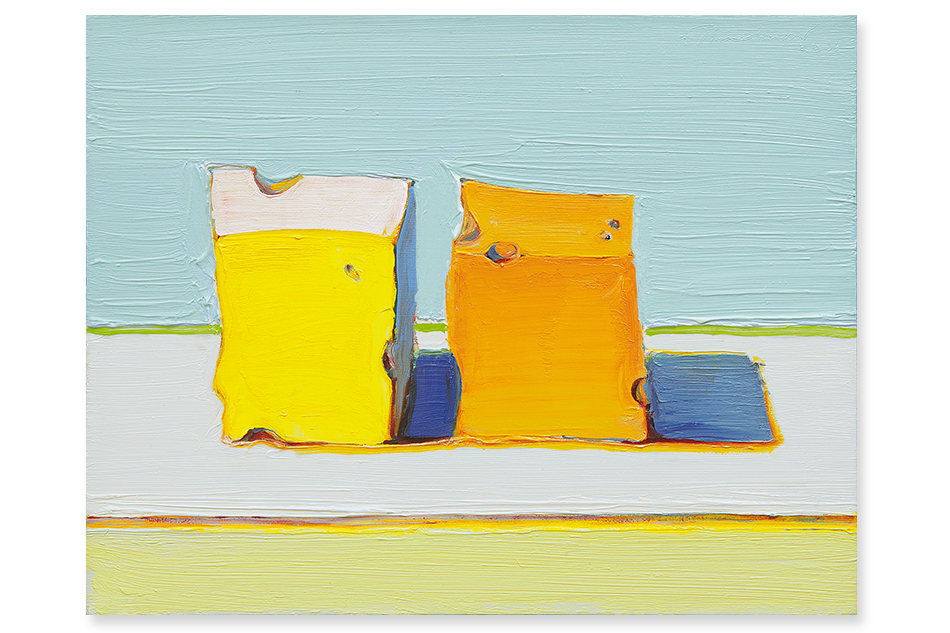 As seen in Two Cheese Cubes, 2011, Thiebaud instills the subjects of his paintings — even inanimate subjects — with a lifelike individuality. 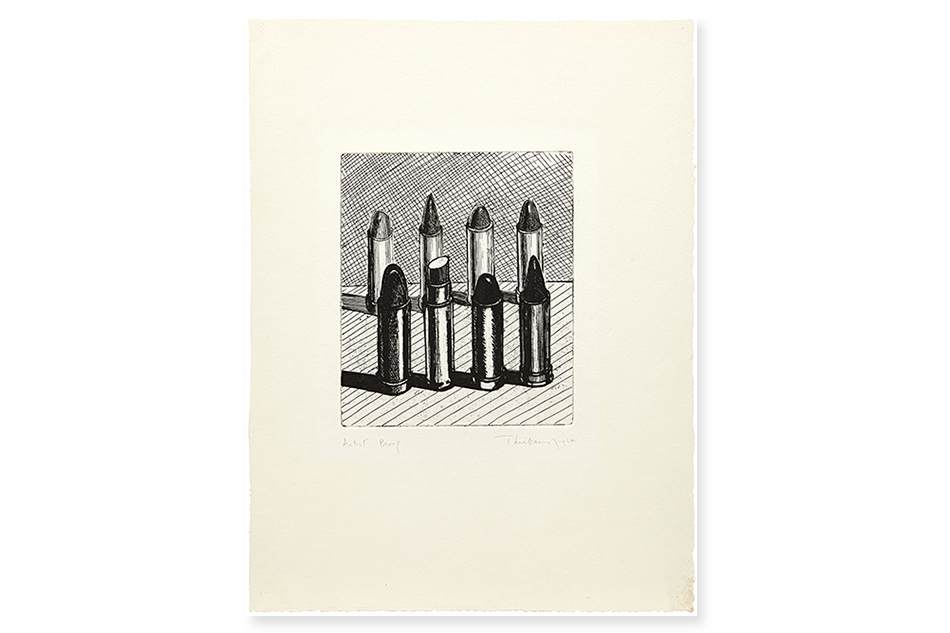 Not every work in the show is a painting: This artist’s proof, Black and White Lipsticks, 1964, is a hard ground and drypoint etching on paper. 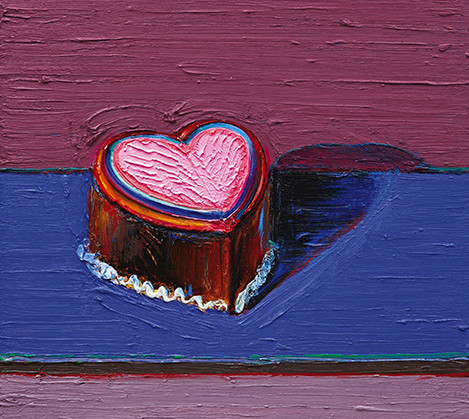 Five decades into his career, the artist continues to offer fresh takes on his favorite subject, as in Dark Heart Cake, 2014.

Thiebaud says that his curiosity about food hinges on the intersection of the visual and the ritual: “How we tend to cut it in a certain way, serrate the cantaloupe, lay lemon slices around the poor old fish like a sacrifice,” he says. He’s also fascinated by the distinctly American approach to food, how a burger and fries looks pretty much the same in all 50 states. His paintings elevate the lowbrow. He describes the wonder that is a gumball machine: “You put a rusty old penny in and get this marvelous magenta ball to suck on.”

As for his own cravings — yes, Thiebaud cops to a sweet tooth. At the top of his list: ice cream, which he calls “one of the great inventions of the human spirit.”

For his food pictures, Thiebaud works primarily from memory rather than photography, which he finds too tightly chained to one version of reality, and therefore more of a hindrance than a help. When it comes to his portraits, he has traditionally painted from life. But lately he’s been leaning on memory instead. “You might be able to invent more and come up with a little different style,” he says. 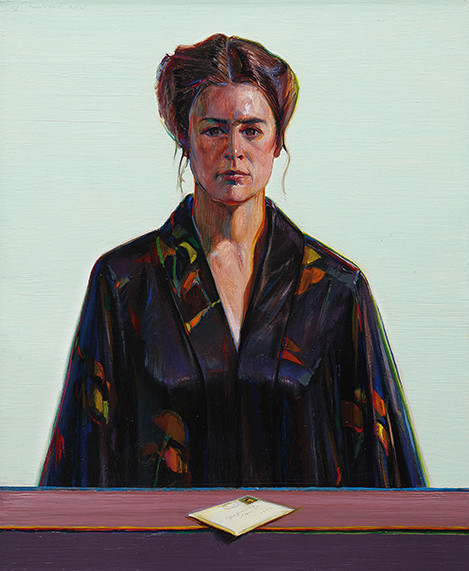 The portraits tend to depict his subjects against blank, neutral backgrounds, their expressions giving away little. Occasionally, Thiebaud injects more mystery, as in Robed Woman with Letter, 1976/1982/2003/2013, in which the woman is rendered behind a table or counter on which sits a postmarked letter. Who wrote it, to whom and what it says are left intriguingly unknowable.

Thiebaud’s heavily abstracted beach scenes, meanwhile, capture the play of both humans and canines. In Beach Dogs, 2004–10, a spotted dog in the foreground springs into the air after a ball, while all that’s visible of a pup in the background is his rear end and tail as he digs joyously in the sand. The shore is Thiebaud’s natural habitat: He grew up in Long Beach, California, and earned money as a kid selling newspapers on the beach and working as a lifeguard. Many of the works in the Acquavella show offer scenes viewed at a distance from an elevated perspective, painted from memory. Explaining the angle, Thiebaud says that in the aughts “we had a condo right above Laguna Beach, five or six stories from a promontory. It was a wonderful visual source.”

As for his landscapes and cityscapes, they’re as much a tour de force of his mastery of color as his dessert paintings. A brilliant yellow sky fills the air in Morning Freeway, 2012–13, while the purple and orange fields of Green Hill Farms, 2008–11, evoke the work of Cézanne. 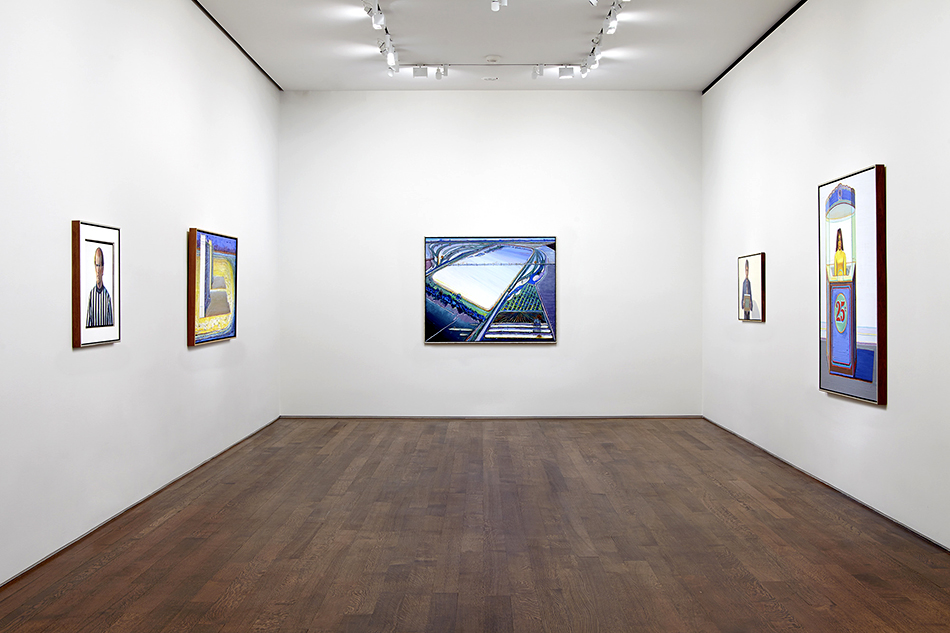 Even at 93, Thiebaud remains prolific; he created several of the works on display at Acquavella over the course of the past year. 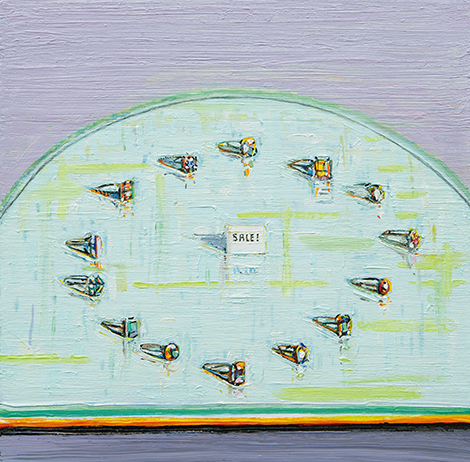 The artist often depicts desirable items secured inside display cases and thus just out of reach, whether cupcakes or, as in Ring Circle, 2012–14, diamond-studded jewelry.

It’s easy to imagine Thiebaud chuckling while painting row upon row of cupcakes and donuts, or dabbing tiny marks representing people on a beach beneath a hulking hotel building that nearly eats up the sky. “I hope in my painting there is humor,” he says. “I love when people smile or laugh or think they’re kind of goofy — because they are.”

“The art world is seemingly quite suspicious of humor,” he continues. “Even the Academy Awards don’t reward great comedies, and most actors say it’s a helluva lot harder to be in a humorous work than a tragedy.” Thiebaud notes that even a visit to New York’s Frick Collection, that hallowed repository of Old Masters, will turn up “some riotous things. They’re easy to miss is you’re too hushed or reverent. Incorporating humor makes tragedies deeper.”

In his own work, Thiebaud insists, light and dark are inextricably intertwined. Sure, his paintings are joyful takes on sensual pleasures. But another way to read his artworks, whether a painting of a heart-shaped cake or a display of jeweled rings, is as a yearning that cannot be sated. “I see as much sadness in my work,” he says, “as happiness.”