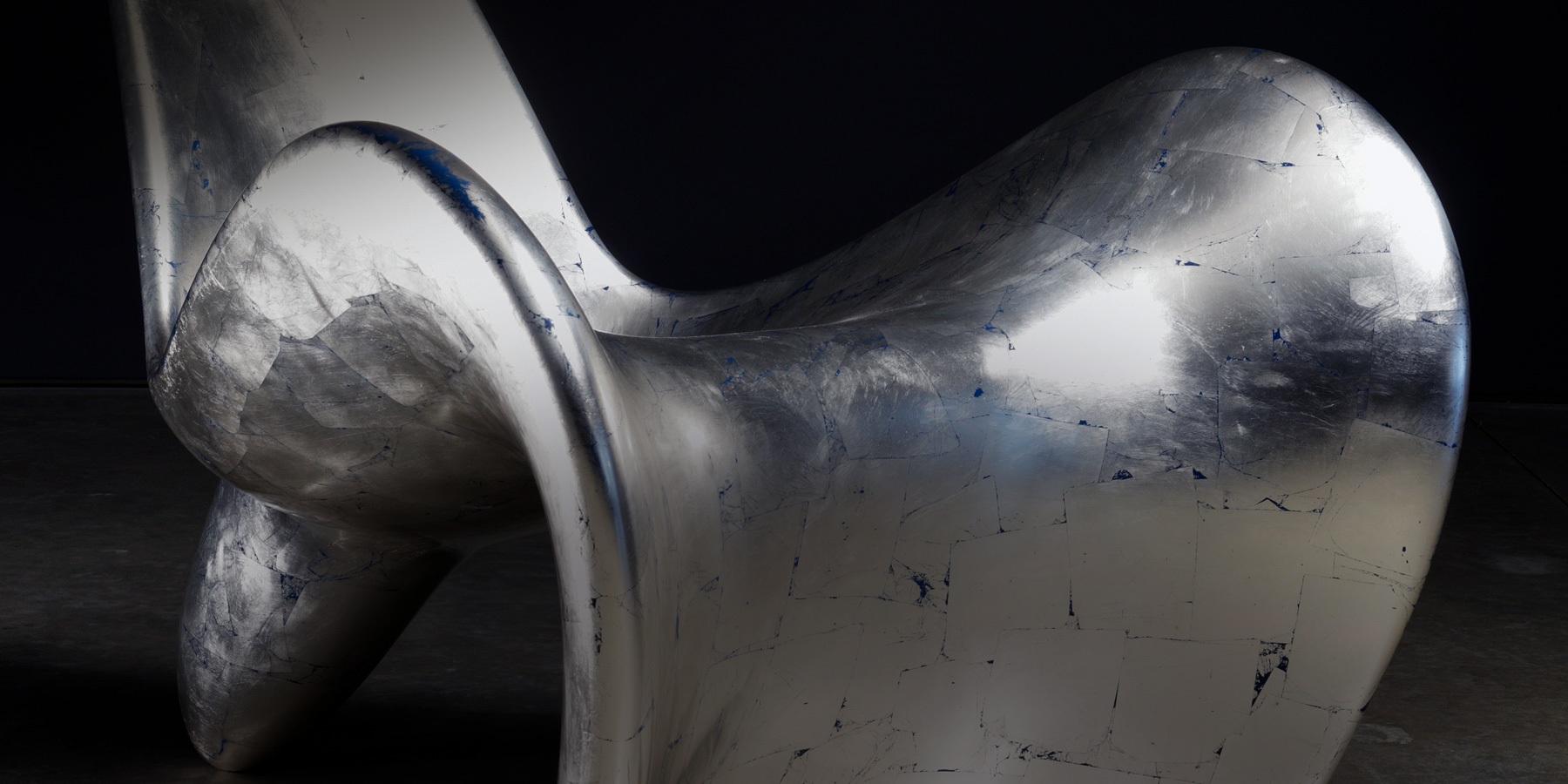 Why Wendell Castle Is the King of American Woodwork

After blurring the boundaries of art and design for more than 50 years, the pioneering American furniture maker is as experimental as ever — and his work has never been more relevant. 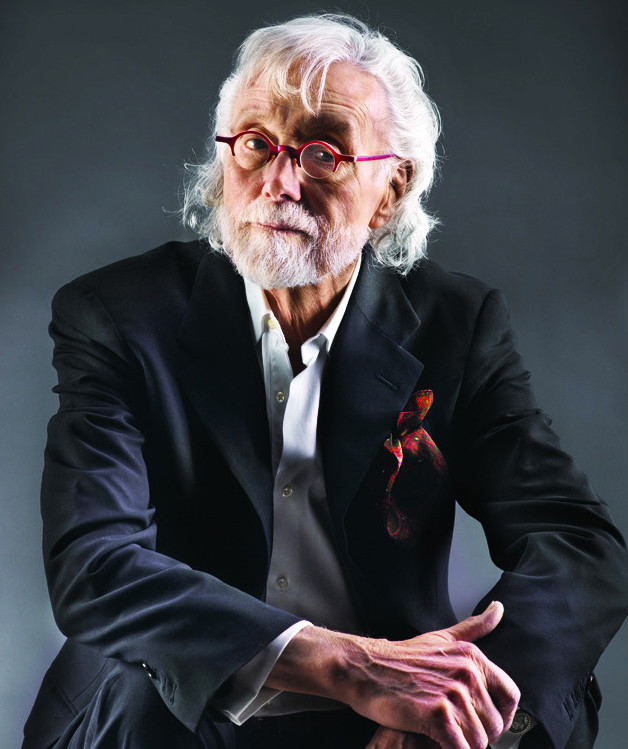 Wendell Castle in 2012 (photo by Antonino Barbagallo Fotografia Inc., courtesy of Friedman Benda and the artist)

Wendell Castle, the American furniture-maker celebrated for his sculptural, biomorphic creations in wood, plastic and bronze, has never been easy to categorize. For the past 50 years, the prolific designer has been making seating, tables and lighting that are often experimental in form and on the edge of functionality. In Castle’s world, ambiguity is intentional, even desirable. “Wendell is truly a sculptor who chose furniture as his medium,” says Evan Snyderman of R & Company, one of Castle’s New York dealers. “And he was one of the first American furniture-makers to blur the line between art and design. He paved the road for what we now take for granted in the contemporary design world.”

With a major traveling museum exhibition of his furniture, “Wandering Forms — Works from 1959 to 1979,” recently wrapping up a tour at the Savannah College of Art and Design (SCAD) Museum of Art, Castle, at 81, seems more relevant than ever. Organized by Snyderman and the Aldrich Contemporary Art Museum, in Ridgefield, Connecticut, where it debuted to critical acclaim last fall, the show proved how ahead of his time the designer was and how influential he remains. “I’m happy about the attention,” Castle says with a wry chuckle. “It would have been nice if it had come a little earlier in my career.”

In his sprawling studio in Scottsville, New York, a small town in the northern reaches of the state, Castle continues to make the limited-edition and one-off pieces that have long garnered him fans among curators and collectors. He’s had a busy exhibition schedule to juggle as well. In addition to “Wandering Forms,” which featured rarely exhibited early pieces — some of which the designer himself had not seen in decades — that contextualize his development, there were several other notable Castle shows recently focusing on his new work, including one at the Kentucky Museum of Art and Craft, and two in New York’s Chelsea district, at the Barry Friedman and Friedman Benda galleries. At Friedman Benda, Castle made an architecturally scaled, multipart environment complete with an elevated platform reached by a curving staircase. Such recent technically dazzling efforts are among his strongest works, says Carole Hochman, a director of the gallery. “It’s unselfconscious, and there’s a kind of freedom,” she says. “He’s drawing from the early pieces and his classic vocabulary, but it’s constantly evolving.” 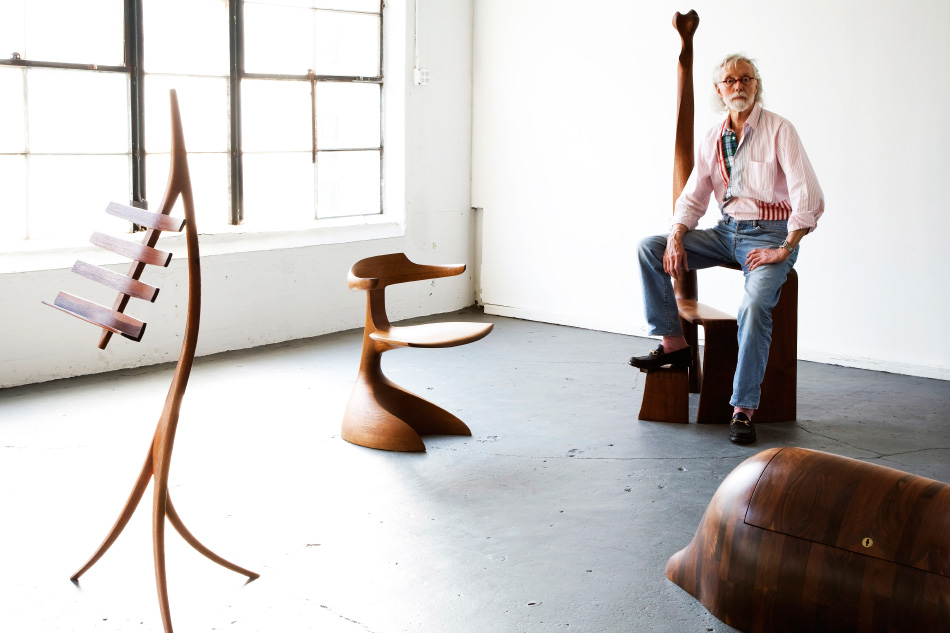 Castle’s innovative early wood works were the focus of a long-awaited exhibition at the Aldrich Museum of Contemporary Art, in Ridgefield, Connecticut, and the SCAD Museum of Art, in Savannah, Georgia. Photo by Sherry Griffin 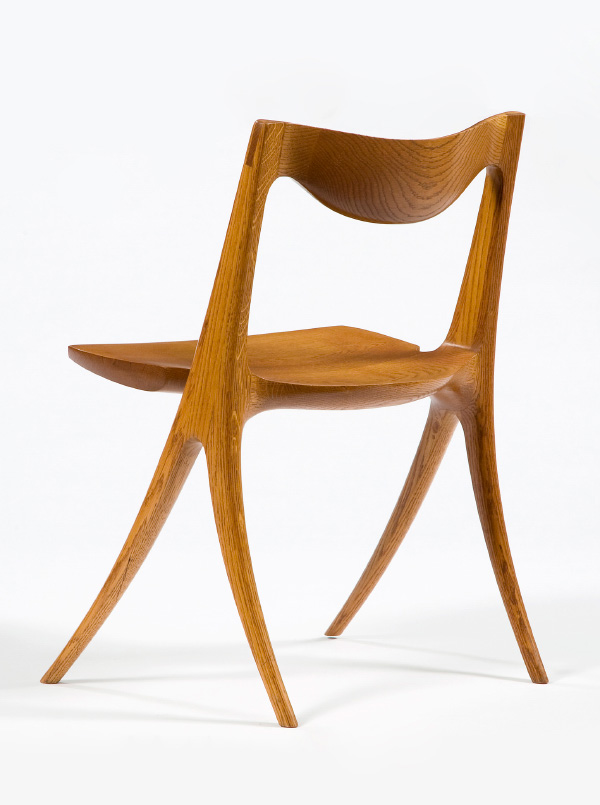 Castle’s sculptural approach to furniture design is evident in the sinuous form of his 1968 Wishbone chair, crafted from solid, hand-carved oak. Photo by Sherry Griffin

Documenting that evolution, a long-awaited Wendell Castle catalogue raisonné, produced by Friedman Benda and published by the Artist Book Foundation, is due out this spring. And, a testament of his desirability among tastemakers, the architect Peter Marino recently placed Castle’s gold-leaf Morning Sun chairs (2009) in the interiors of several new Chanel boutiques.

Born in Emporia, Kansas, in 1932, Castle studied sculpture at the University of Kansas. The sketchbooks from his student years, roughly 1954 to ’58, are filled with drawings for wood sculptures; some of those abstract forms would later be brought to three-dimensional life as furniture. But at the time, says Castle, “I didn’t realize there were people who made furniture by hand. I didn’t even know there was a field.” Then, around 1958, he encountered the work of Wharton Esherick. Like George Nakashima and Sam Maloof, the other dominant figures in American furniture of the period, Esherick treated wood with reverence, emphasizing the grain, the burl and the natural contours of the tree. “I was the opposite,” says Castle. “I didn’t care about craftsmanship. I didn’t care about a burl. I didn’t really think of wood as being precious.”

One of his earliest efforts, the spare and calligraphic Stool Sculpture, 1959, only hints that it’s a functional seat. Castle constructed it with found wood and ivory gun stocks, which were easy to shape and fit together. “You could sit on it but you shouldn’t, really,” says design critic Alastair Gordon, who wrote the “Wandering Forms” catalog. “You’re just not sure how to approach such an object. And that ambiguity is interesting, just as a statement.” 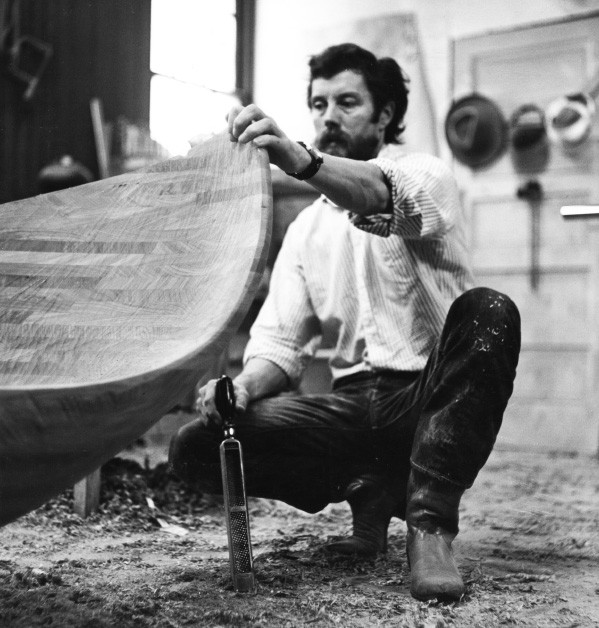 Castle works on a wooden piece in his studio in the 1970s.

But without any formal training in cabinetmaking or woodworking, Castle didn’t consider himself a proper furniture maker. So it came as somewhat of a surprise when, in 1962, he was recommended for a professorship in the furniture department at the Rochester Institute of Technology, in New York, where he continues to teach. “I was actually very poorly qualified for that,” he says with typical modesty. “I had done hardly any furniture, but I got the job somehow.”

Around that time, he had wanted to start working in bronze but had abandoned the idea because of the expense of casting. He briefly tried welding metal, but he didn’t like wearing a helmet. So wood, he says, was something of a default material, and it turned out to be perfectly suited to what he wanted to achieve: giving furniture a sense of volume. He was able to make curvaceous, rounded objects by adopting the stack-laminate technique — layering thin sheets of wood in vertical stacks and sanding and smoothing them to achieve the desired shape. It’s become Castle’s signature process, and he still works this way. “The stack-laminate pieces are high American art,” says Gordon. “He didn’t invent the process, but he took it to the next level.”

Despite his success, by the mid-’60s, Castle was restless. He wasn’t giving up wood entirely, but he was concerned he’d be pigeonholed. “I didn’t want to be known as a woodworking person. That bothered me,” he explains. “And I missed color. I realized everything I was making was brown, and brown is probably my least favorite color.” The results from this period (around 1968 to 1973) are smooth, brightly colored floor lamps with single, unshaded bulbs, as well as chairs and sofas from the Molar series (so called for their toothlike shape) and his soft- edged Cloud shelves — all of them made from gel-coated, fiberglass-reinforced plastic that could be poured into molds of his design and cast in limited editions by small manufacturing companies.

Seemingly the antithesis of wood and all that it connotes (the handmade, unique and organic), plastic nevertheless fit with Castle’s experimental tendencies (and no small thing, it was also considerably less expensive). Castle continued to challenge himself with subsequent works, including the Environment for Contemplation, 1970, a podlike structure large enough to accommodate a person who, upon entering, can close a little door and shut out the world. That piece was included in an important group show at the Museum of Contemporary Crafts, in New York, in 1970.

After the show closed, Castle brought the piece back home, where, more than 30 years later, Snyderman of R & Company saw it and persuaded Castle to restore it. “It is probably one of the most important pieces in Wendell’s career,” says Synderman, who brought it to Design Miami/Basel in 2005. There, it was acquired by the Miami-based collector George Lindemann, who keeps the environment in his office. “When I need to get away and think for a minute, I sit in there,” says Lindemann. “That’s not why I bought it, but that’s how I’ve ended up using it.” 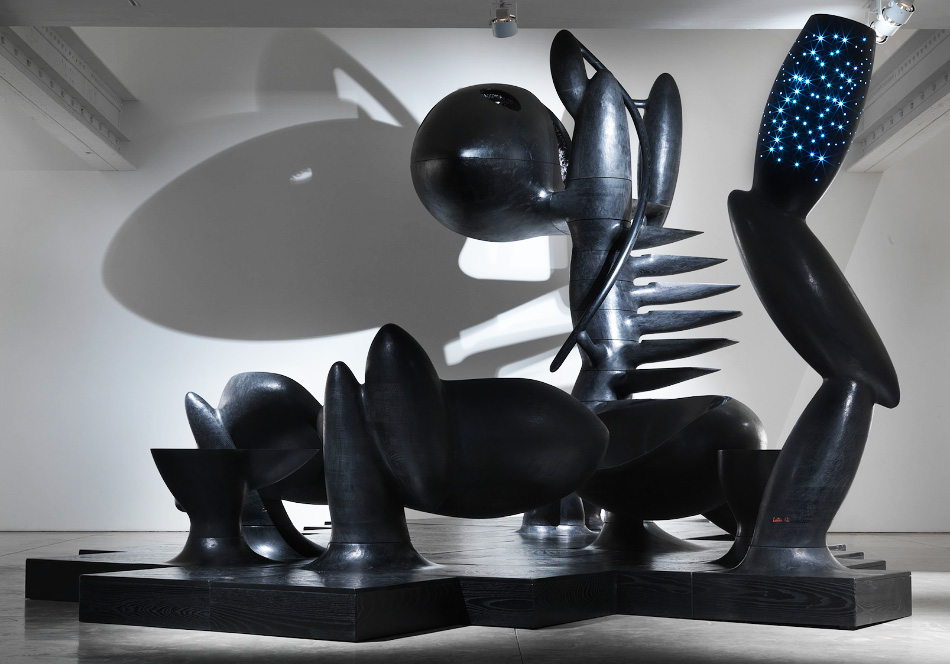 In recent years, Castle has used computer technology to help him create such large, complex installations as A New Environment, first exhibited in 2012. Photo courtesy of Friedman Benda 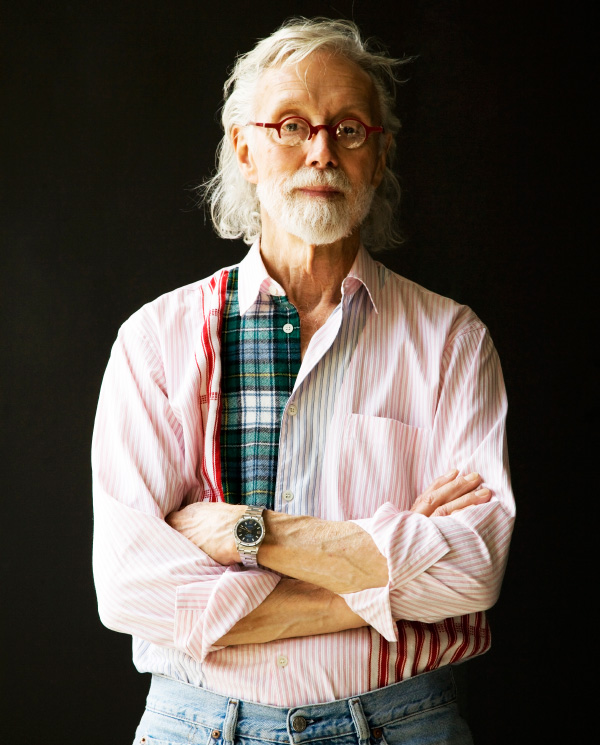 “I’m happy about the attention,” says Castle of his recent critical accolades. “It would have been nice if it had come a little earlier in my career.” Photo by Sherry Griffin

Castle has also long made production pieces: practical, accessible works that still have that Castle flair. There are factory-made versions of his designs, which he personally approves, and these are available exclusively at Dennis Miller Associates, in Manhattan. At his New York Design Center showroom, Miller has small, leaf-shaped Pod tables, walnut-framed Scoop lounge chairs and an MC2 dining table whose playful base takes the form of an asterisk. “The designs are very whimsical,” says Miller, “particularly the Pod tables,” which, he adds, are brisk sellers at the NYDC. “Wendell looks back at his past work in such meaningful ways.”

But Castle is also adapting his methods to simplify and improve the creative process. After resisting computer-drafting programs, he realized a few years ago that the technology could contribute to his work in a meaningful way. As he has for decades, he still starts out by working up a design on paper, but now he can also create a digital pattern, which is then carved by a large machining robot he keeps onsite on his studio. That means every layer in a stacked piece will be uniformly cut. “In the past, I estimated these,” he says. “Now we can do it in a way that’s very accurate and that allows my designs to be a whole lot more complex.”

These days, he’s working on a variety of stack-laminate wood pieces, including an eight-foot-long three-seater and some “very sculptural” chairs and tables. “There’s a huge amount of activity here,” he says. “Luckily, I’ve got some really good people helping me. We’re always working. I’d be here Sundays, but my wife won’t let me.”