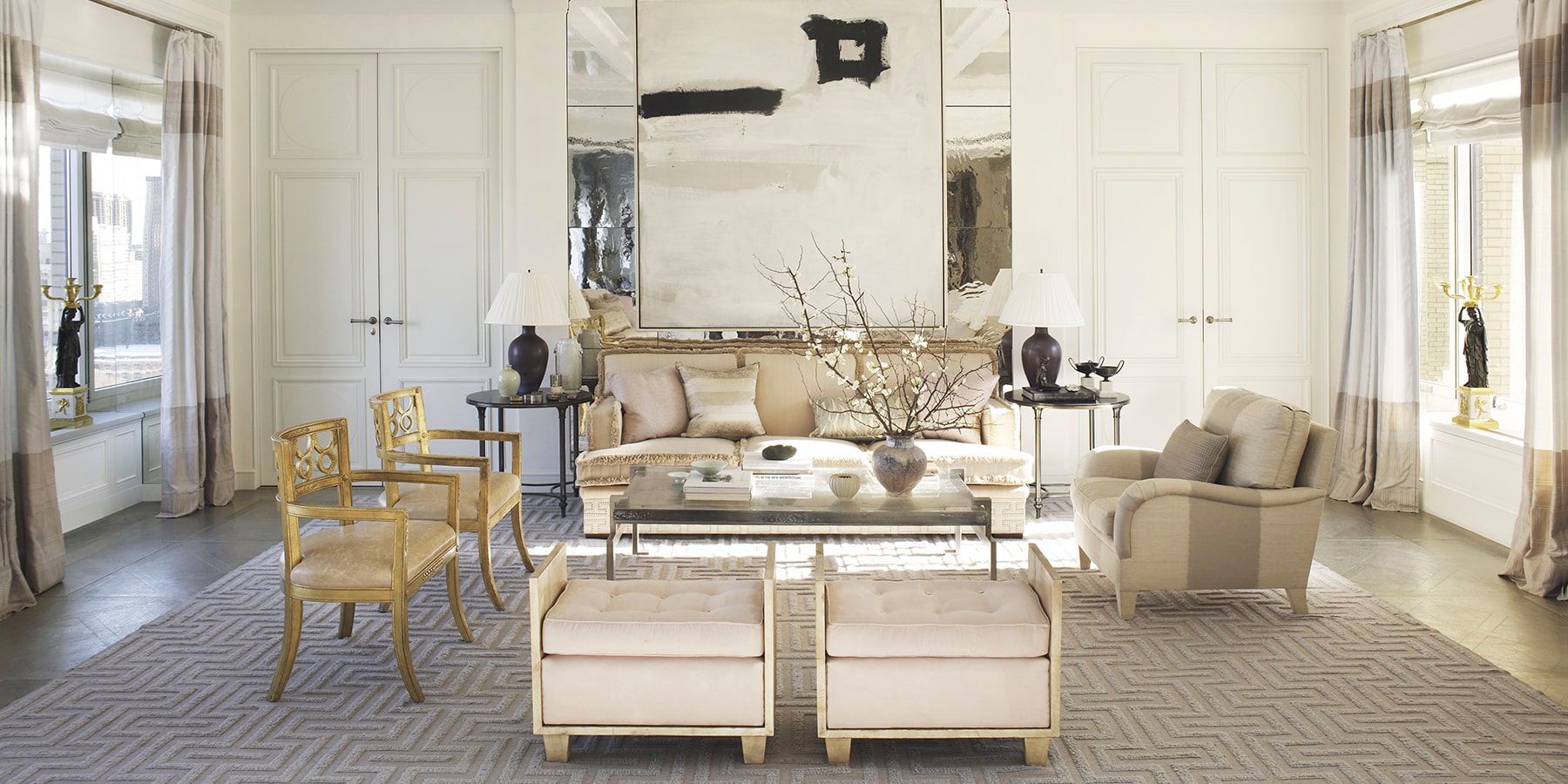 Wendy Moonan steps inside extraordinary interiors across the city and shares the details of their design in a new book. 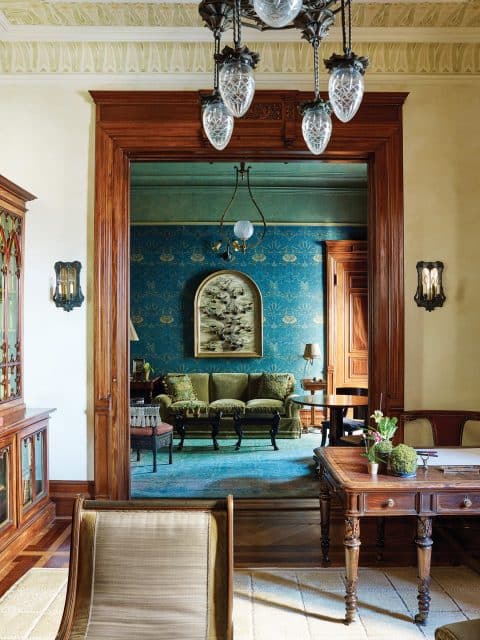 In designing the library of a 19th-century Central Park West duplex, Joanne De Palma started with the ca. 1900 Donegal carpet, then added pieces like the fringed Carlo Bugatti chair and ca. 1860 French diorama above the sofa (photo by Francesco Lagnese). Top: A Franz Kline painting is displayed in an airy Central Park South residence by Michael S. Smith and Oscar Shamamian (photo by Pieter Estersohn).

Design journalists — specifically those who cover residential interiors — often have an inside view of the world of domestic architecture and decorating. Whether they’re visiting a grand townhouse or a sleek modern apartment, they gain an appreciation of not just what makes a home beautiful or fashionable but what makes it a comfortable, welcoming place in which to live.

Wendy Moonan has occupied just such a privileged position for three decades — first as an editor at Town & Country, then later as a contributor to House & Garden and Architectural Digest, an antiques columnist for the New York Times and a frequent contributor to 1stdibs’ Introspective. Now, her book New York Splendor: The City’s Most Memorable Rooms (Rizzoli) offers an intimate look at 113 spaces, in Manhattan and Brooklyn, that were designed by a who’s who of decorators and architects over the past half-century or so.

The volume, which has a foreword by noted architect and educator Robert A.M. Stern (who has had an impressive sub-career as a historian of New York City design), is a broad survey of the styles and approaches that have shaped the homes of affluent, sophisticated New Yorkers. Some of these rooms were designed by legends, for legends: the library of philanthropist Brooke Astor’s Park Avenue apartment, for instance, designed by Albert Hadley, of Parish-Hadley; and another library, this one designed by Billy Baldwin in the Fifth Avenue apartment of William S. Paley and his glamorous wife, Babe Paley. Also making appearances are the homes of fashion designers, including Adolfo, Bill Blass (whose understated, beyond-chic Sutton Place apartment, decorated by MAC II, is one of Moonan’s favorites) and Gloria Vanderbilt, who designed an extraordinary quilt-lined bedroom for the townhouse she lived in. 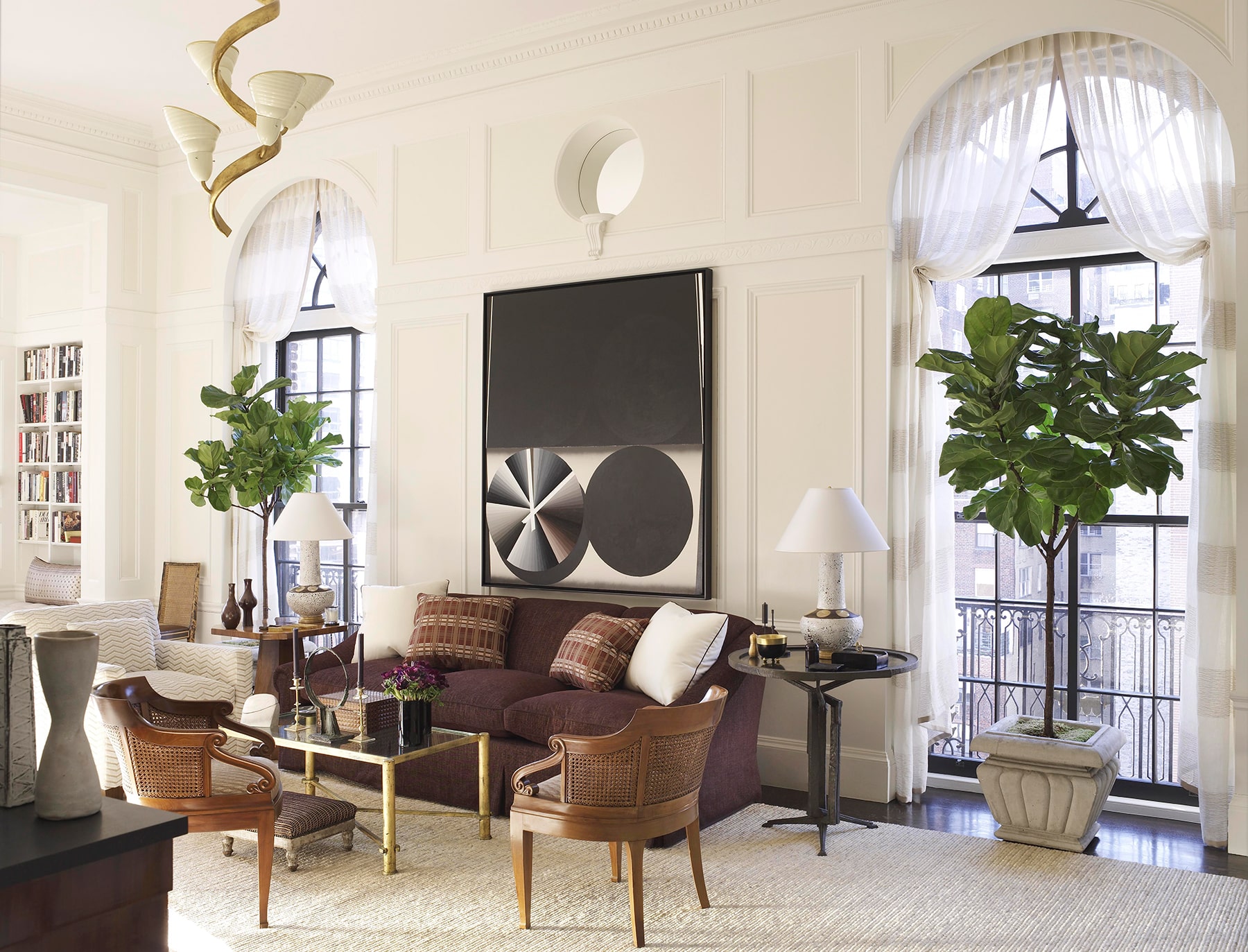 David Kleinberg updated his Upper East Side apartment, which once belonged to George Gershwin, with chalk-white walls, an early 20th-century Swedish light fixture and a painting by Garth Weiser. Photo by Pieter Estersohn 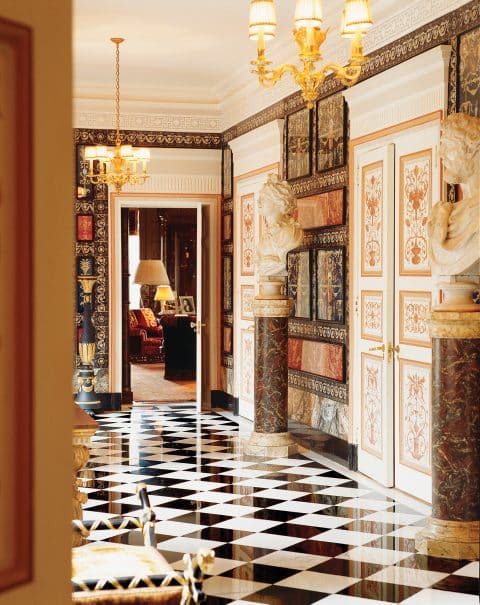 Renzo Mongiardino created a grand entrance in this Upper East Side apartment: the doors to the elevator landing are painted with Renaissance-style ornamental arabesque motifs and flanked by a pair of ancient marble busts on pedestals. Photo by Michel Arnaud

Other residences represented belong to people who remain anonymous but are no less discerning, like the couple in whose late 19th-century Central Park West apartment designer Joanne De Palma created an exquisite backdrop for furniture and art appropriate to the architecture. Another anonymous couple asked the architect and designer Robert Couturier to design the interiors of a Brooklyn townhouse to show off their collections of antique French furniture and decorative arts, which includes important Louis XVI pieces. It didn’t matter to Moonan whether those who lived in the spaces featured in the book were well-known or not. As she said in a recent interview, she wanted to “celebrate the talent, not the owners.”

In some cases, however, the designer and client were one. These examples offer a look at the way creative folks shape their own living spaces. Bunny Williams’s elegant but comfortable bedroom features a glamorous canopy bed, made with mirrored panels, that was designed by Serge Roche in the 1940s. The designer David Kleinberg crafted a subtly luxurious apartment for himself that appears at once classical and contemporary, while the architect William T. Georgis transformed an early 20th-century townhouse into a sleek modernist home and office. And in Greenwich Village, the artist Julian Schnabel built a 50,000-square-foot palazzo atop a former stable, a Venetian dream come true. An unusual but inspired choice is the artist Donald Judd’s minimal renovation of a former factory building in Soho for his own home. 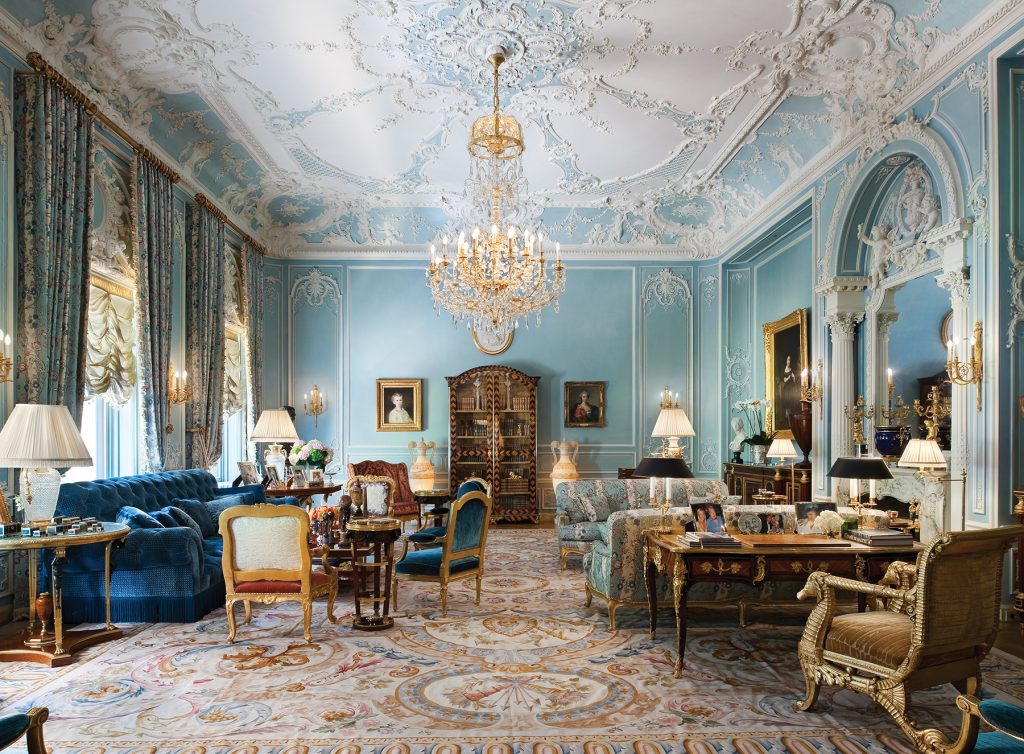 Alberto Pinto restored the 1885 ornamental plasterwork ceiling of this Fifth Avenue townhouse and contrasted it with Wedgwood-blue walls. Photo by Jacques Pépion 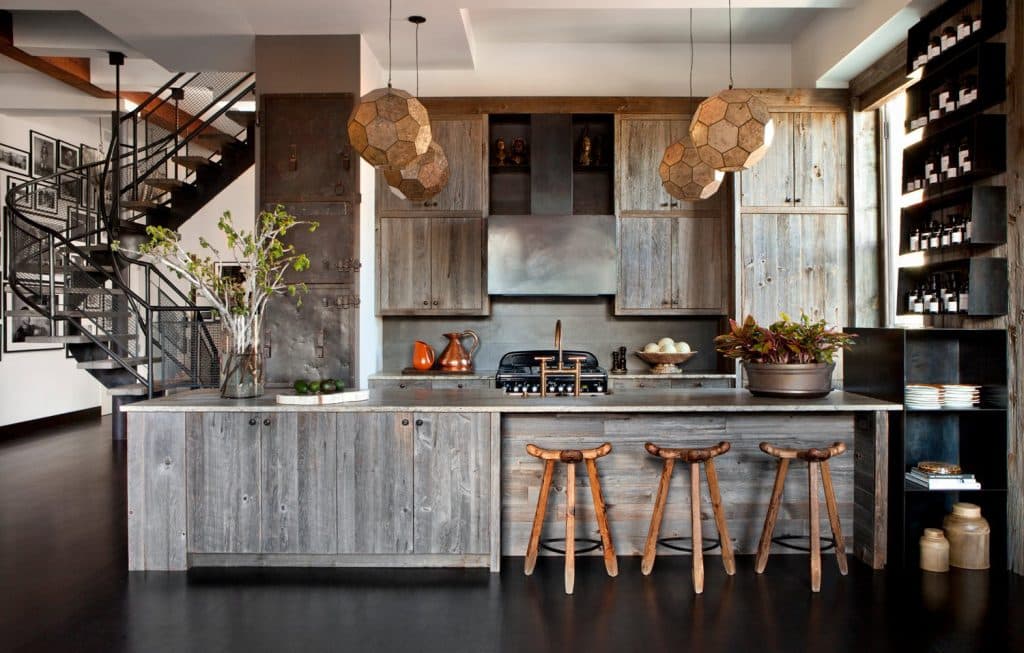 In the Nolita penthouse he designed for a sustainability-focused client, James Huniford created this kitchen using reclaimed barn wood, a concrete countertop and light fixtures made of natural mica. Photo by Nick Johnson 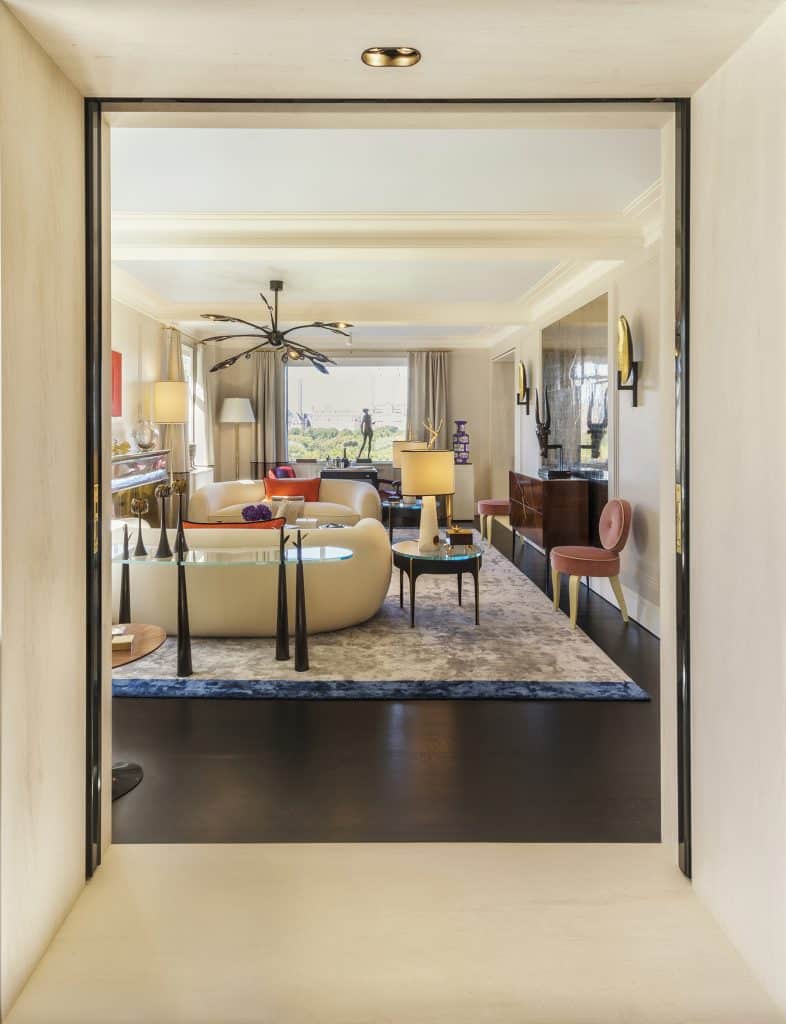 Achille Salvagni‘s first Manhattan project was a pied-à-terre for clients who enjoy entertaining. Many of the furnishings for the living room, shown here, are his own design, including the chandelier, rug, console and lamps. Photo by Paolo Petrignani 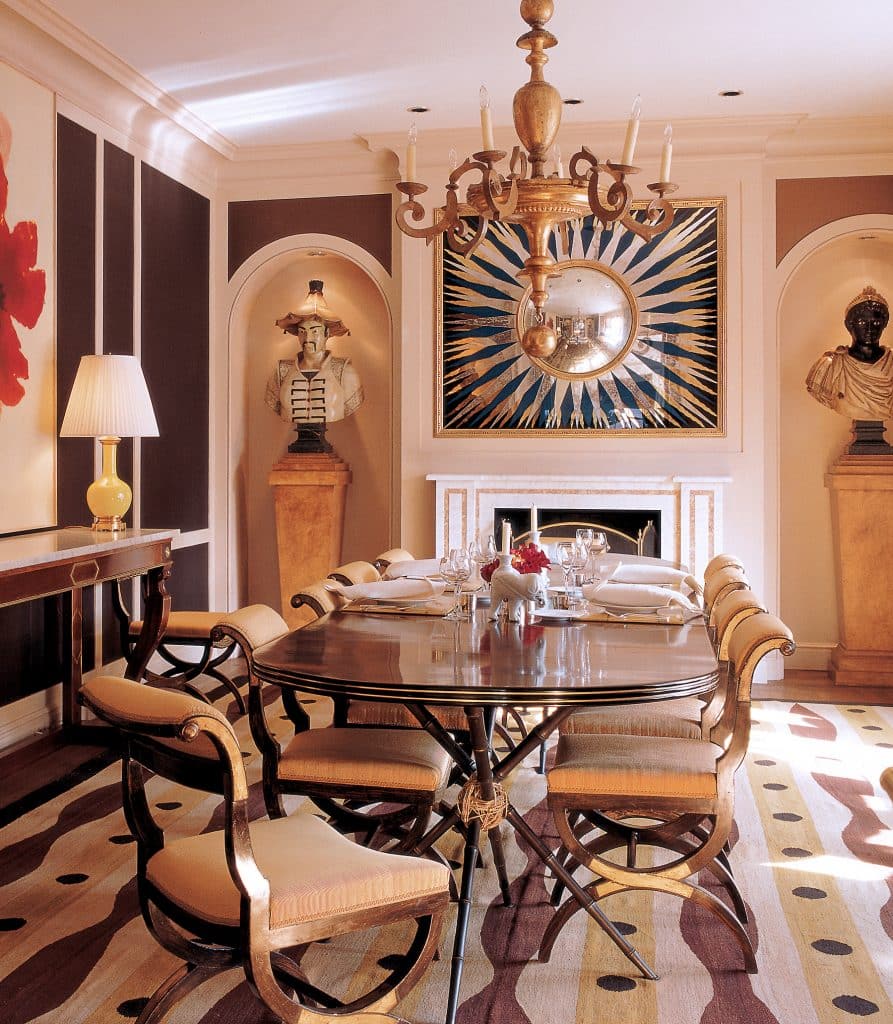 Bunny Williams created this Upper East Side dining room in 2010, incorporating niches to showcase the client’s antique busts of the four seasons. She designed the mirror above the mantle as well as the dining table, which was inspired by one that Maison Jansen made for the Duchess of Windsor. Photo by Fritz von der Schulenberg 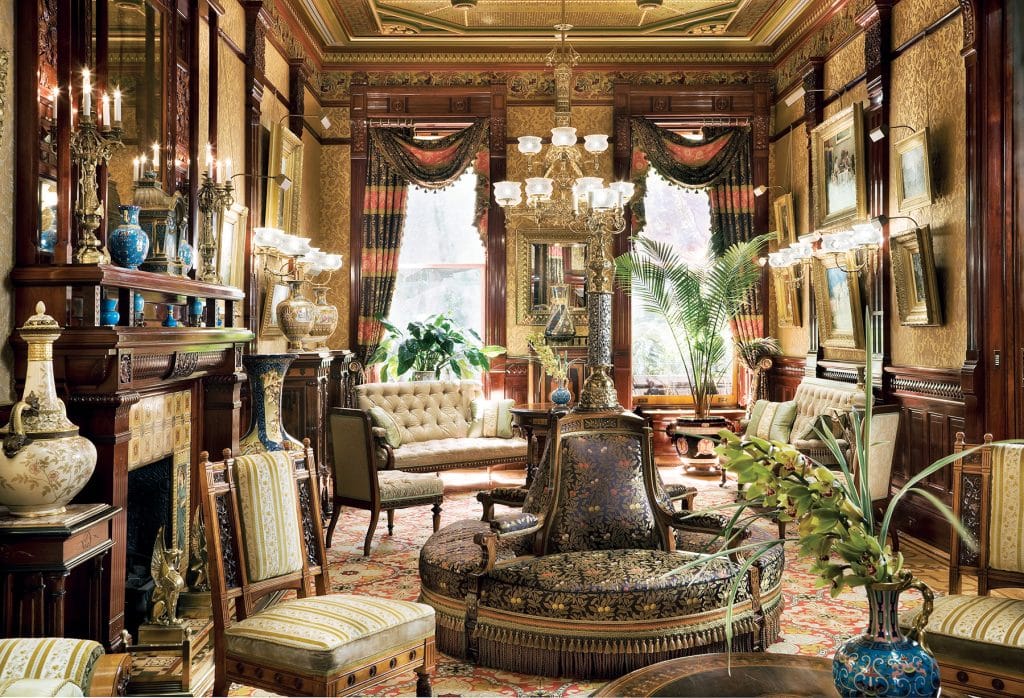 The architect and antiques dealer David Scott Parker began in 1999 to restore this 1880s Upper East Side brownstone for a couple who asked him to return it to its original glory. He spent years sourcing period materials and antiques, but the family found the completed project well worth the wait. Photo by Durston Saylor 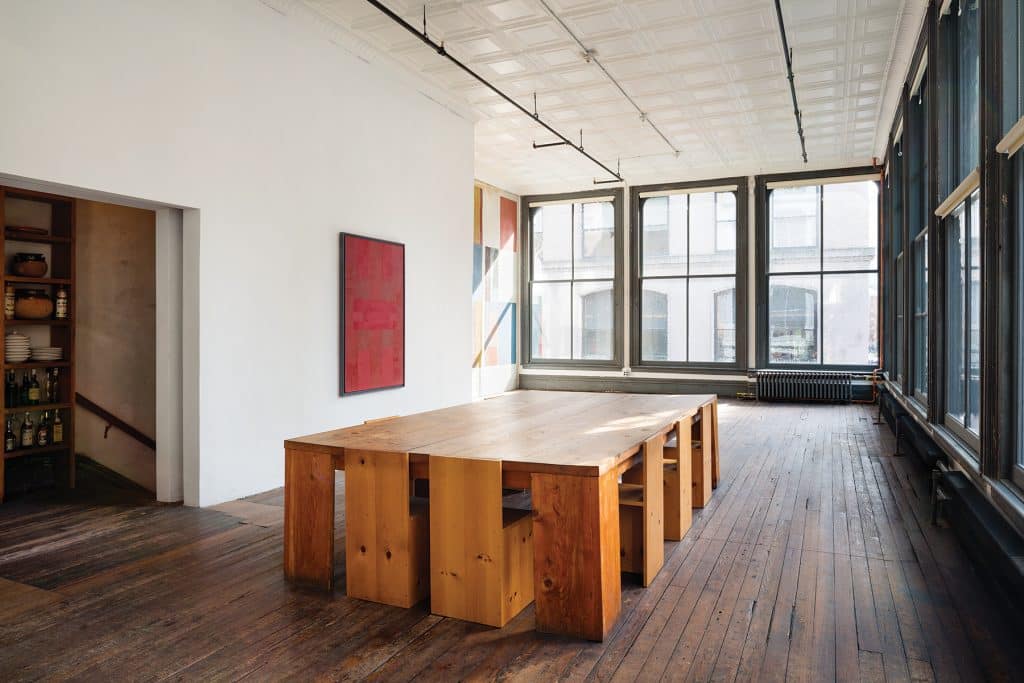 The word eclectic has long been tossed around with abandon, but Moonan’s selections truly fit the definition. They range from the strikingly modernist, like the architect Paul Rudolph’s tour-de-force multilevel Beekman Place penthouse, to the passionately historicist, such as the 1880s Upper East Side townhouse that the architect David Scott Parker restored to its original Aesthetic Movement glory. Crisply contemporary work by architects Robert Kahn (Moonan loves his design for a double-height loft apartment), Deborah Berke, Gabellini Sheppard and Steven Harris and Rees Roberts + Partners mingles with the old-world luxe interiors of Juan Pablo Molyneux and the creations of designers S.R. Gambrel, Miles Redd and Katie Ridder, who skillfully adapt traditional design to contemporary lifestyles. 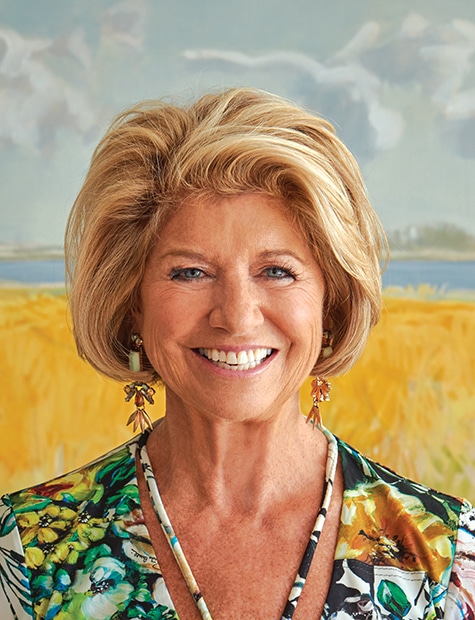 What all these spaces share, Moonan states in the book’s introduction, is “the wow factor,” that certain something that “elicited, from me, gasps of admiration and pleasure.” They are also, in large part, richly hued, reflecting Moonan’s own love of color, which she may have inherited from her grandmother Hazel H. Adler, an industrial designer who worked for companies like Ford and Kohler and who published a book on interior design, filled with what Moonan calls “her unorthodox color combinations,” in 1916.

“Color and layering are making a bit of a comeback,” Moonan said in a phone conversation, noting that the monochromatic interiors that were fashionable in the early 2000s are not to her liking. But regardless of the color scheme, it was important to Moonan that her book showcase a wide variety of design philosophies, to illustrate the vast array of creativity at work in New York. She terms it “humbling” and adds: “I wanted to show that this is the A-team, and that they’re really different, one from another, but that they all have talent.”