It’s hard to pin down the proposed function of Aldrin B.‘s beautifully detailed artifact from the future. But given the clouds reflected on the surface, I like to think of it as a complex and precise thermostat that regulates not just the temperature but also humidity and barometric pressure, indoors and outside. Or maybe it just makes beer.

In Buddhism, samsara denotes the cycle of birth, life, death and rebirth, as well as thinking, doing, feeling, craving, striving, hating, loving, being, et cetera — basically everything in the material world, plus lifetimes spent in other realms. It is escapable only by attaining nirvana, which is beyond all that.

Ukrainian artist DΞVAMØTIØN‘s impeccable stop-motion animation encapsulates our samsaric existence in the most succinct way — through the energetic moving and morphing of colorful clay geometric forms that end up where they started after an epic 15-second adventure. Click on the link and turn the sound ON for the full Samsara effect.

Gabriela Cardona Walther, aka publicdmnvenus, embellished a digital photograph with acrylic markings to create a holy, magical contemporary portrait of a female saint. The artist produced Ruega por Nosotras in honor of the many women and girls in Mexico who have been stalked, harassed, kidnapped and murdered with little to no recourse.

“We live in a country that could care less about femicides, even though we have one of the highest rates. Impunity leaves us with despair,” she writes. “Ruega por Nosotras is an escape from this reality, a way to put some hope out there for all the hermanas that are still fighting, missing.”

This powerful and reasonably priced NFT comes with a physical artwork.

Ellie Pritts brings together analog circuit-bent hardware and live coding to make her kaleidoscopic video works. This one has remarkable colors, contrasts and transitions that pull the viewer into its vortex.

darkness comforts me in the empty hallway that goes on and on, 2022, Alyssa Stevens

In her digital drawings, Alyssa Stevens works with a palette of mostly primary colors to flesh out intuitive forms. As the title of this piece suggests, the composition has a depth that’s easily missed at first glance but becomes more evident the more time you spend with it. The faces are both masklike and childlike yet contain a richness of emotion.

Glowing matter spins around a black hole in Andy Wauman‘s entrancing animation, created in collaboration with generative artist Pablo Salafurka and musician Pluhm. Far from their horrific, nihilistic reputation as destroyers of everything light and good, black holes are agents of transformation and perhaps even transportation (to other universes).

Euphoria Seismic celebrates these ecstatic possibilities. “The black hole represents an instrument of change,” Wauman writes, “existing through a paradox as the hole transforms from a hermit kingdom to a vigorously open system.”

A lot of artists put skulls in their work, and crypoartists seem to be especially drawn to the trope. What makes Los Angeles–based Sasha Vinogradova‘s “Calavera” (Spanish for skull) series stand out is its deft melding of Mexican Día de los Muertos subject matter with motifs from traditional Slavic folk paintings.

I can’t stop watching and listening to Kevin Burg‘s little music machine. The mechanisms, the simulated materials, the highs, lows and mids of the tune he composed — they’re all such a delight. At this scale, the virtual instruments would sound much different in real life, but the fact that the contraption can’t exist in the physical realm makes it all the more enjoyable as a work of cryptoart.

Lesley Grainger effortlessly mixed digital lines and physical brushstrokes to make Glow. The abstract painting feels vital and urgent — even on a laptop. 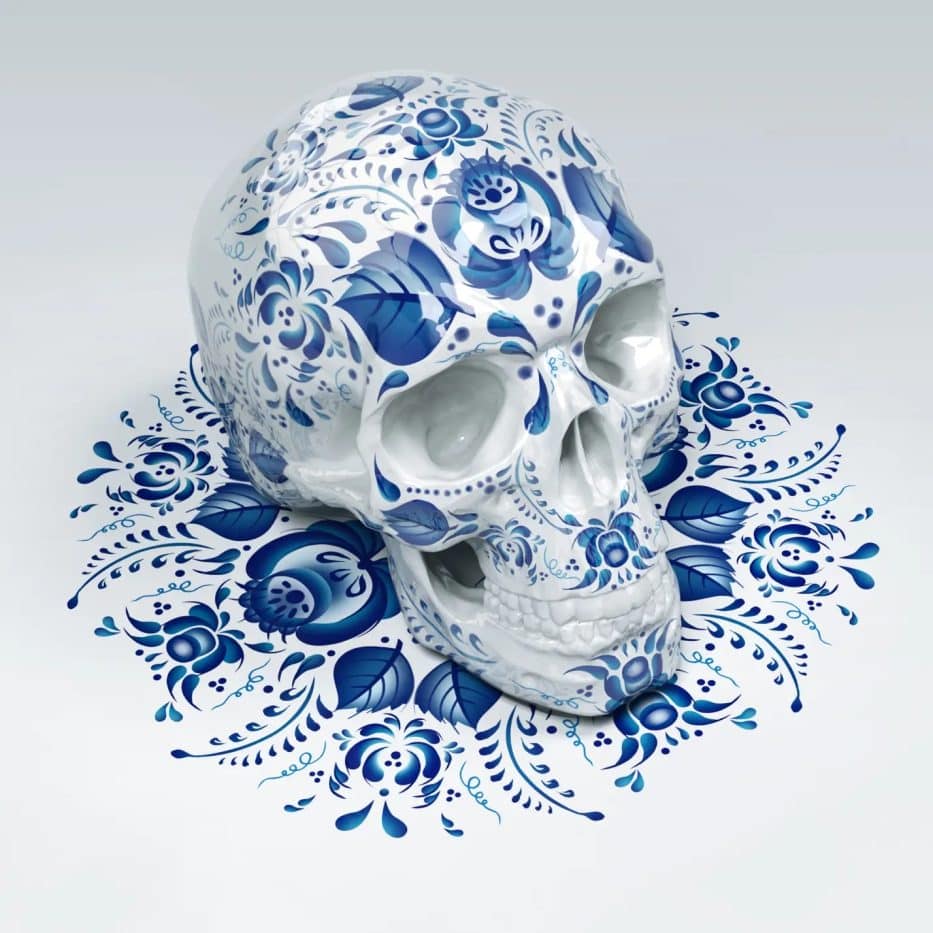