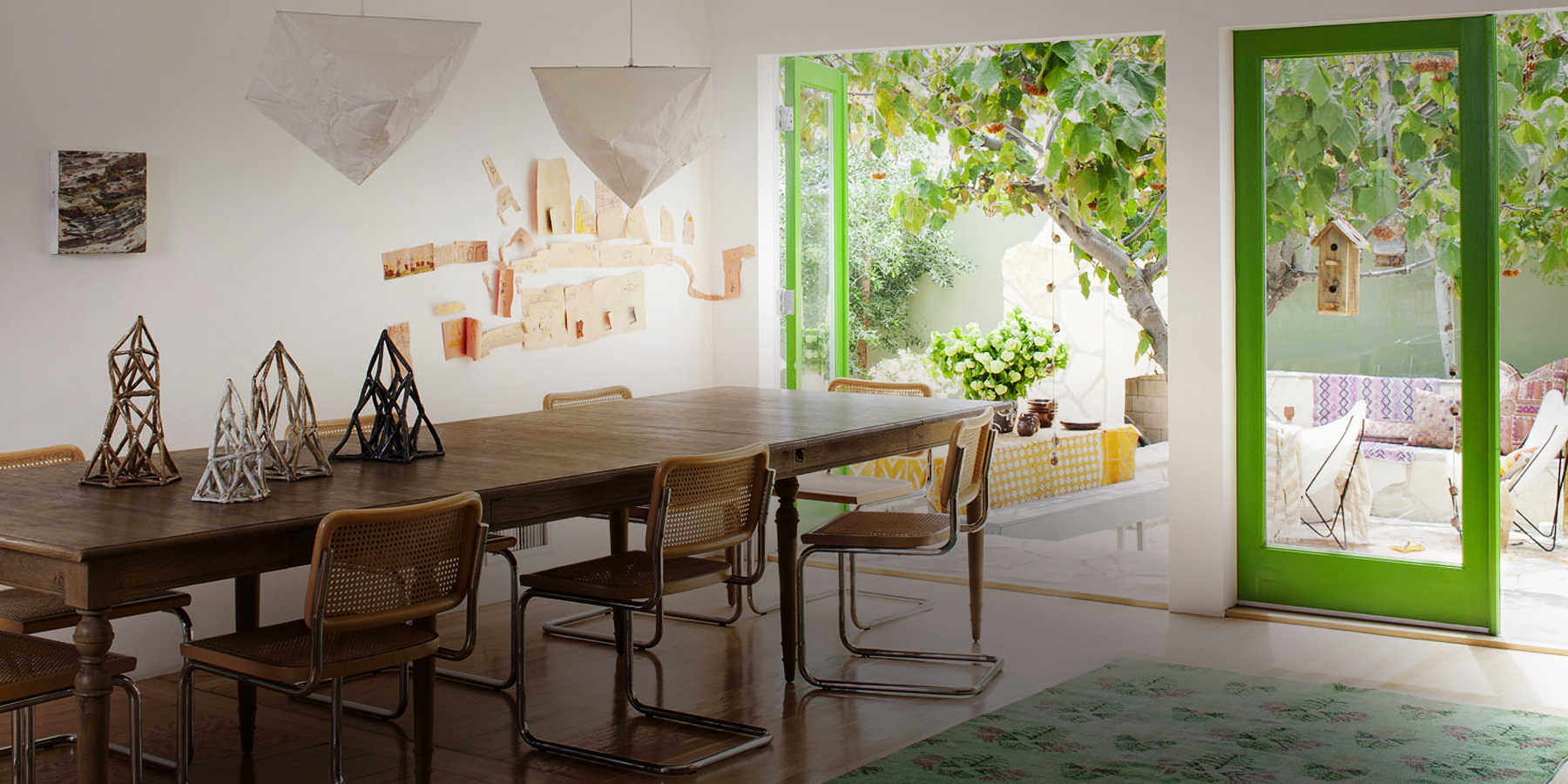 Los Angeles–based Alexandra Loew worked as a documentary filmmaker before turning to architecture and interior design. Today, she creates clever and unexpected spaces with a touch of cinematic fantasy. 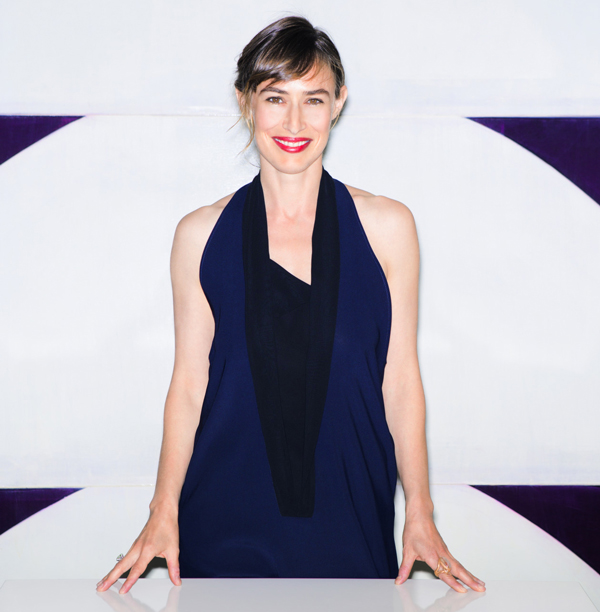 Alexandra Loew established her interior design firm a decade ago, and today it has offices in New York and Los Angeles (photo by Carolina Palmgren). Top: For a 2011 project in Venice Beach called the Triangle House, Loew echoed the house’s folded planes and angles with Noguchi paper lanterns and pyramid sculptures by Matthias Merkel Hess (photo by Beth Coller).

As a graduate student in architecture at UCLA, Alexandra Loew researched the life and work of Barbara D’Arcy, who spent 15 years — from 1958 to 1973 — creating model rooms for Bloomingdale’s. D’Arcy’s famous tableaux, on the fifth floor of the Manhattan department store, “brought a sense of energy and excitement to design,” says Loew. The rooms ranged from super-traditional to mod (think Plexiglas with hot pink neon); some of the best ones were designed “for” celebrities — Ernest Hemingway, Pierre Cardin, Truman Capote — “anyone she thought was culturally relevant,” Loew says.

As an interior designer with offices in New York and Los Angeles, Loew has followed in D’Arcy’s footsteps, bringing her own sense of energy and excitement to design. She treats her clients the way D’Arcy treated celebrities: as muses. “Our goal is to create the most interesting possible version of everything they’ve ever wanted,” Loew says. 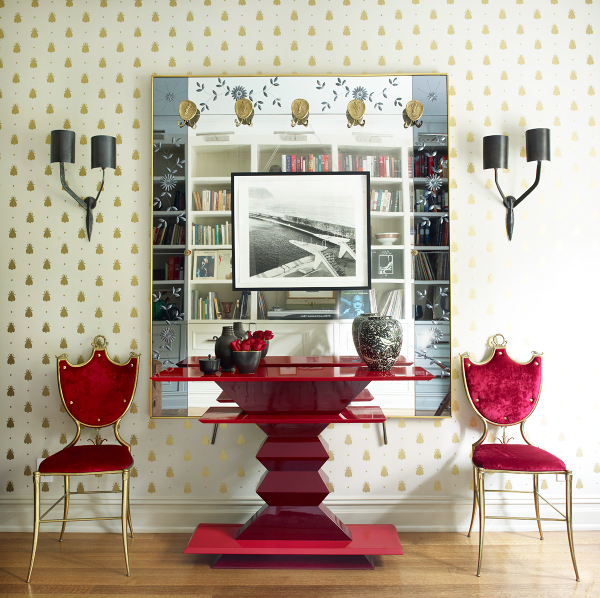 In an apartment on Manhattan’s Upper East Side, a console from Wright Now sits between a pair of Italian chairs from Eccola. Loew sourced the Felix Agostini sconces from JF Chen, the mirror from Mantiques Modern and the Max Laeuger vessel atop the console from Jason Jacques Gallery. Photo by William Waldron

These days, in addition to designing private homes, Loew is working for developers, who, she says, give her the chance to paint on “a broader public canvas.”  But her favorite jobs will always be the ones for clients who challenge her, like the Manhattanite “with an exuberant personality, who needed his spaces to express that.” For just a sense of how Loew made the apartment resemble its owner, consider one wall of his study: Loew started with a traditional wallpaper by Farrow & Ball and a very un-traditional console table, its base segmented like a kind of totem. She then lacquered the table in two shades of lipstick red, making it even more attention-getting. (It now displays pottery by the German architect Max Laeuger.) Behind the console, she hung a mid-20th-century Italian hall mirror with acid-etched flowers and five rosettes anchoring coat hooks. Cleverly, Loew used one of the coat hooks to hang a black-and-white photograph by the German filmmaker Telemach Wiesinger. (Loew often hangs art in front of mirrors, making it hard to see yourself but easy to see other parts of the room. “I use mirrors not for vanity, but to amplify spaces,” she explains.)

Next to the mirror, she installed a pair of hand-forged, asymmetric metal sconces by Felix Agostini. Below them are two playful Italian occasional chairs that Loew had upholstered in red silk velvet, but not completely — their backs are covered in a black-and-white Missoni stripe, so that when the chairs are moved away from the wall, another element reveals itself. 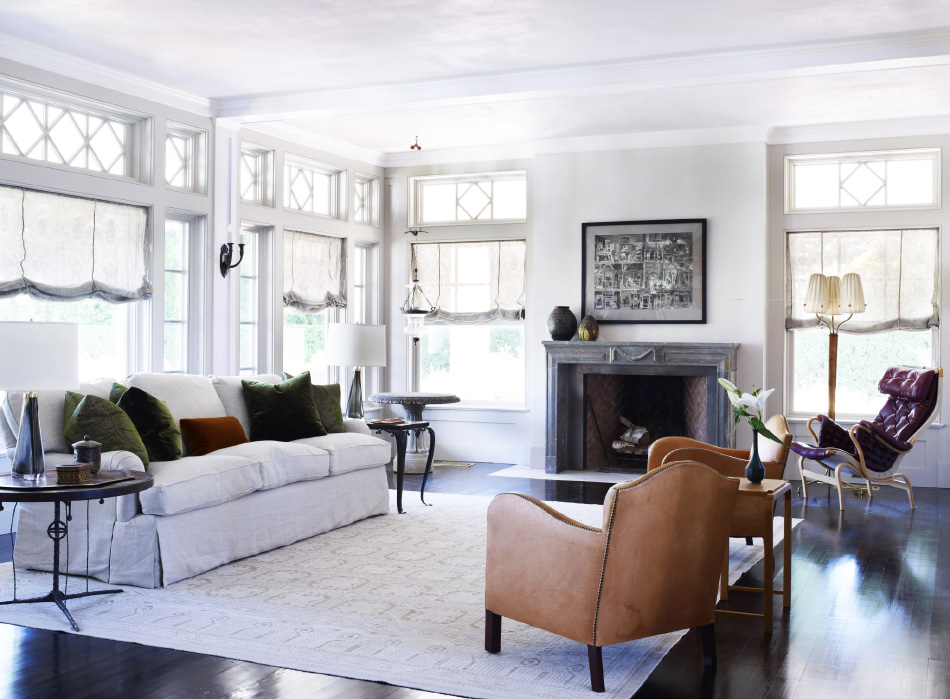 In a just-completed Hamptons beach house, serene hues of pink, cream and gray show off rich metals, velvets and leathers. The Bruno Mathsson Pernilla chair is from Wright Now, while the Orrefors lamps are from B4. Loew picked up the decorative ceramic and brass objects on buying trips to Paris and Brussels and the Bertil Brisborg floor lamp from Lief. Photo by William Waldron

“Our goal is to create the most interesting possible version of everything our clients have ever wanted.” 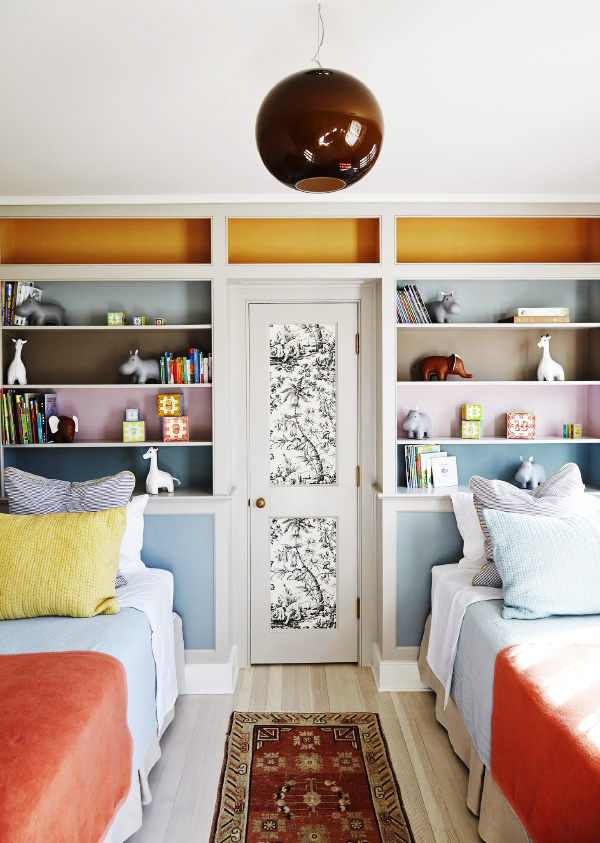 Elsewhere in the Hamptons house, Loew outfitted a bedroom for young twins in gender-neutral colors — “non-saccharine, more gelato than popsicle,” she says. Photo by Brandon Shulman

Loew is clearly an expert in the decorative arts — she uses words like “passementerie” and “cerused” and “bergère” with authority. But she also thinks architecturally. After transfering from Sci-Arc, the Southern California Institute of Architecture, to UCLA and getting her architecture master’s degree, she worked for the Pritzker Prize–winner Thom Mayne before setting up her own firm in 2004. The eventual focus on interior design, she says, was rooted in her realization that she was more interested in “spacemaking” than in the broader gestures of architecture. Besides, before beginning architecture school, Loew had been a documentary filmmaker. And she has carried the filmmaker’s instincts into design — creating rooms that tell compelling stories.

In one case, a client asked her to embody Hollywood glamour in a few rooms of a house near New York City. “She was very clear about how she wanted to feel in the suite,” says Loew: like Greta Garbo or Rita Hayworth. The owner’s collection of black-and-white George Hurrell photos of those stars and others set the tone. Loew added Art Deco elements — a fireplace with exaggerated fluting dominates the bedroom — but she also threw in hints of disco. Among them: custom Lucite frames for the Hurrells and drapes made of gold mesh by Whiting and Davis, whose fabrics usually decorate divas.

Loew didn’t go quite so far with the same client’s pool house, but she did take a dusty, musty space and turn it into “exactly the place you’d want to take cover in a summer storm,” she says. Given a beautiful old structure to work with, she left the architectural elements, including a brick floor, a stone hearth and timber beams, intact. She then gave each element a foil — using a nubby Moroccan wedding blanket as a throw rug on the hard brick floor, tiling the mantle in a geometric pattern that throws the stony fireplace into relief, and hanging pencil-thin light fixtures from the sturdy timbers. The place had looked suburban; now it could be a chic new hotel on St. Barths. 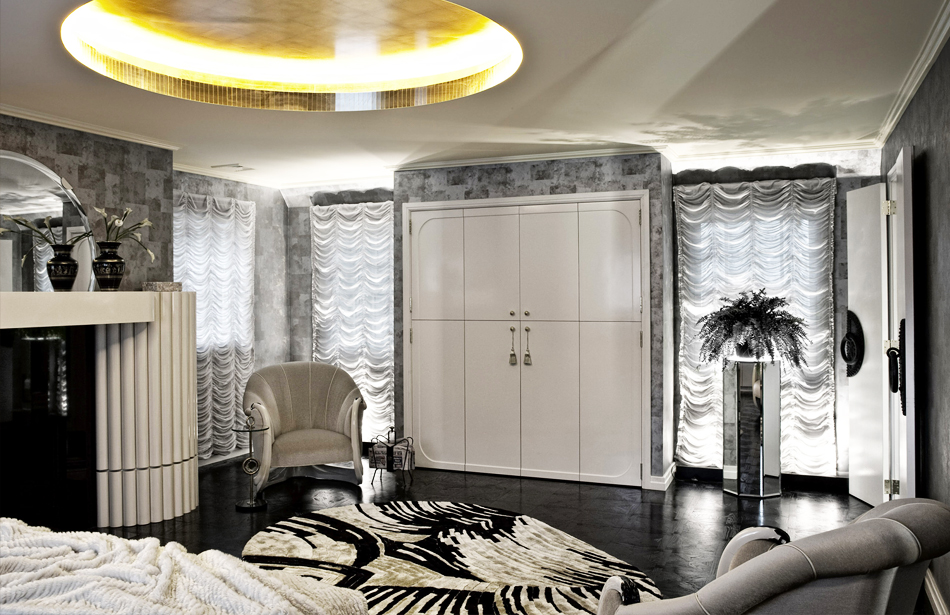 “We studied the work of Hollywood portrait photographer George Hurrell to develop the architectural palette for the master suite,” says Loew of a 2010 project in Armonk, New York, for a client who wanted to channel silver-screen glamour at home. “We kept the architecture sleek and the materials sultry, for maximum impact.” Photo by Justin Bernhaut 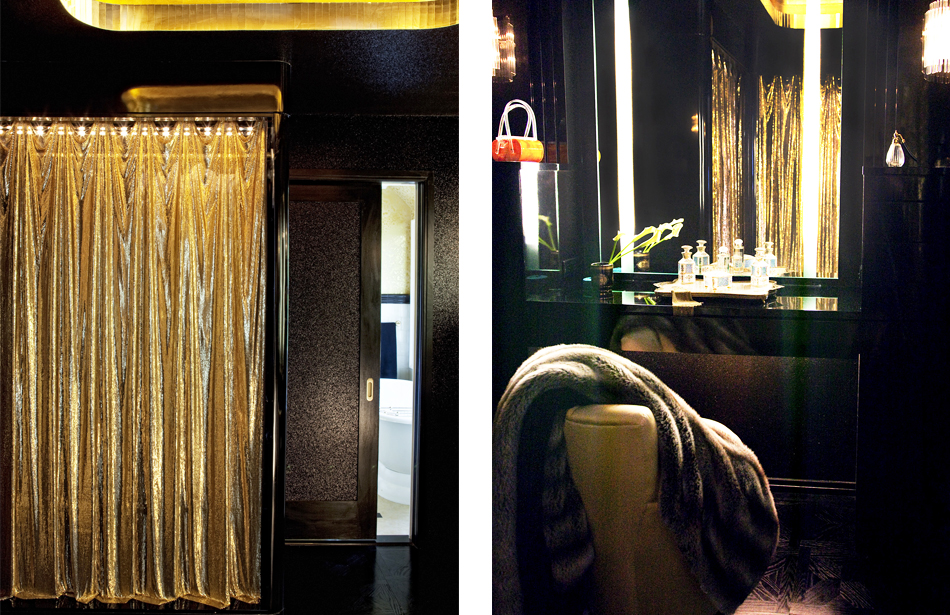 In the dressing room of the “suite for a starlette,” as Loew calls the master bedroom of the Amonk project, black lacquer millwork is brought to a high French polish, and gold drapery panels by the fashion house Whiting & Davis run on motorized tracks around the room’s perimeter. Photos by Justin Bernhaut (left) and Jessica Antola (right) 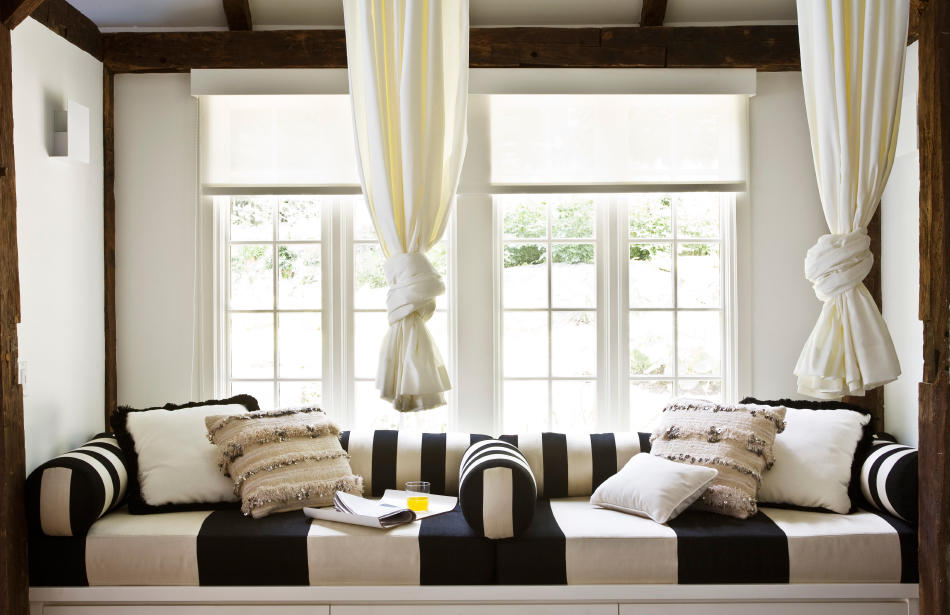 In the Armonk pool house, completed in 2010, “a play between rough and refined gives the space its exotic resort-like atmosphere,” says Loew. “We can call it ‘rustique.’ ” Photo by Justin Bernhaut 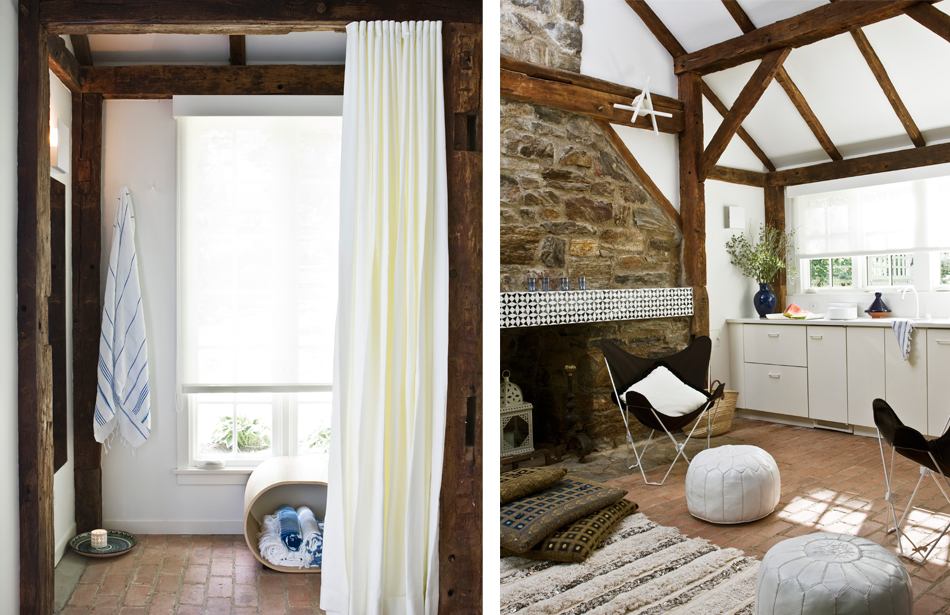 In the pool house, Loew and her team exposed raw timber beams and unfinished brick floors, adding white lacquer built-ins to house board games, fridge-freezer drawers and a pantry. The custom marble mosaic decorating the mantel and the Moroccan wedding blanket, lanterns and leather poufs, all from Mosaik, lend an exotic vibe to the otherwise rustic setting. Photos by Justin Bernhaut 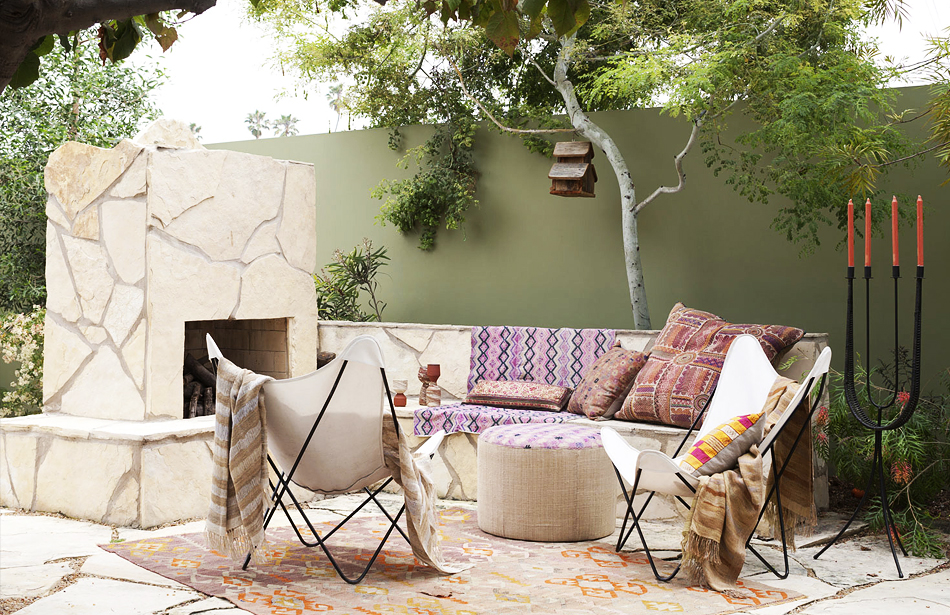 Loew can also take a more modest, and more purely modernist, approach. In Venice Beach, a client asked for her help decorating a house by architect Hope Alexander. Recalling the work of a young Frank Gehry, it has lots of acute angles. Loew used those angles as a theme, choosing a geometric Noguchi lantern for the dining room and an Origami chair by Patricia Urquiola for the home office. In the guest room — the only space without an acute angle — she had one painted on the walls, in the style of 1960s supergraphics. 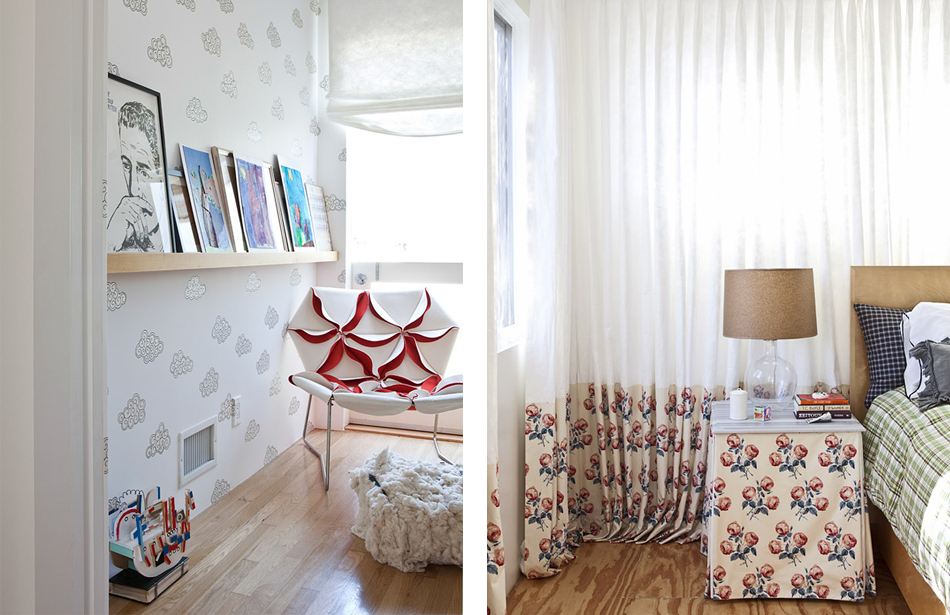 In another room of the Venice Beach Triangle House, an Origami chair by Patricia Urquiola adds whimsy to a home office (left) while the master bedroom (right) is adorned with one-of-a-kind curtains made from a combination of Tyvek — the material used for FedEx envelopes — and traditional chintz. Photo by Justin Bernhaut

That house also has drapes, but even they are far from ordinary. Loew had them made of Tyvek (the FedEx–envelope material, which is translucent). But for trim she chose “a very traditional chintz,” creating a wonderful frisson of old and new. Who else would use Tyvek and chintz together? Maybe Barbara D’Arcy. 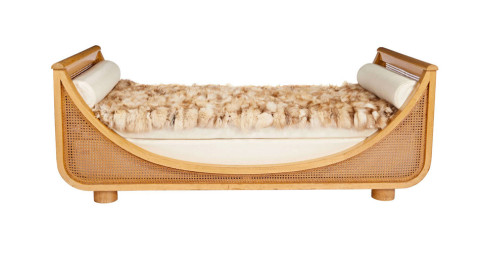 This piece, a threadbare rug and an indoor tree — boom! It’s all you need in a room. Plus, a cocktail and a nice playlist. 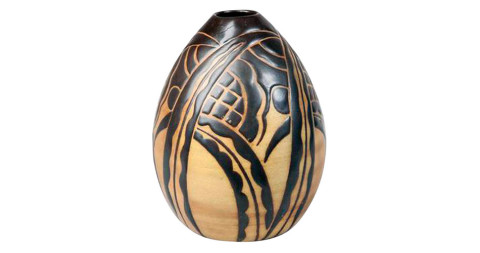 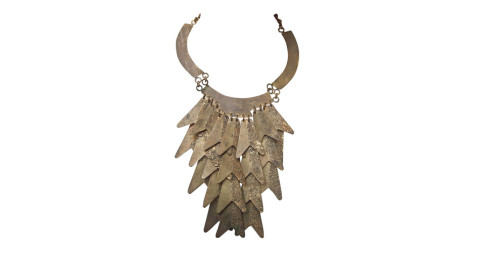 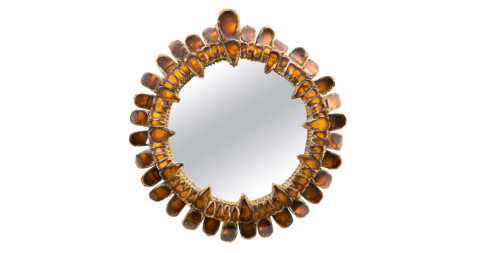 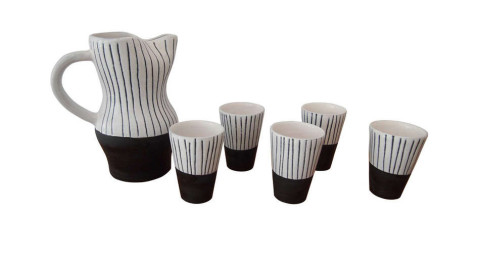 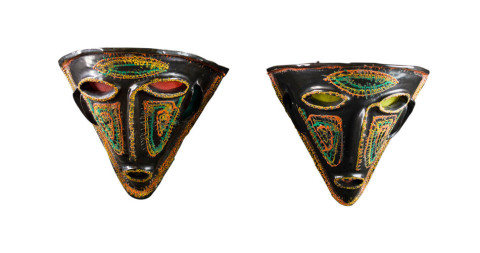 I love anything primitive and French, especially Accolay. These remind me of some of the Surrealist rooms staged by Jean Royère. 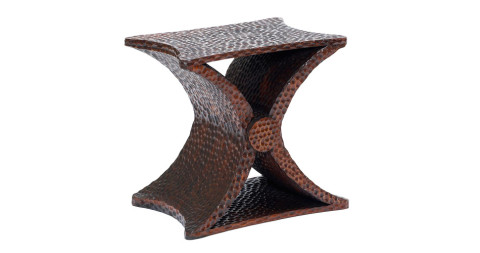 Because I love anything and everything GOUGED. It’s the perfect mix of rustic and refined. 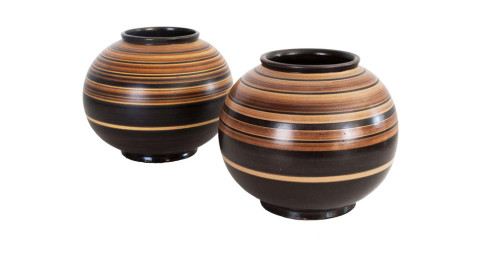 Timeless, earthy, a little tribal: My favorite qualities in an interior. 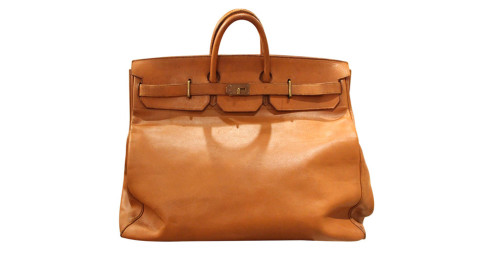 Nice for a work bag, I like that it’s a little masculine. The saddle leather would look great with summer whites.