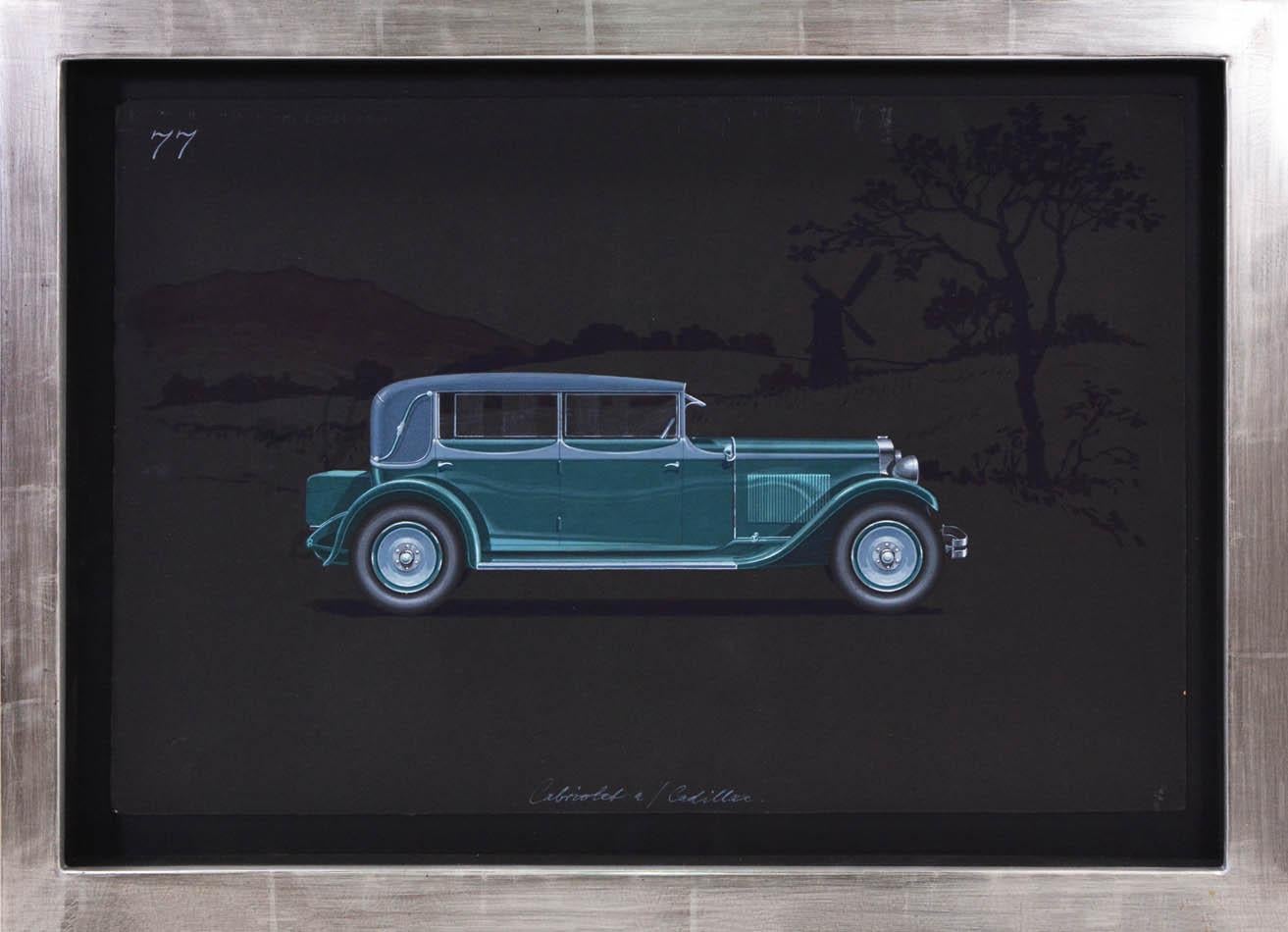 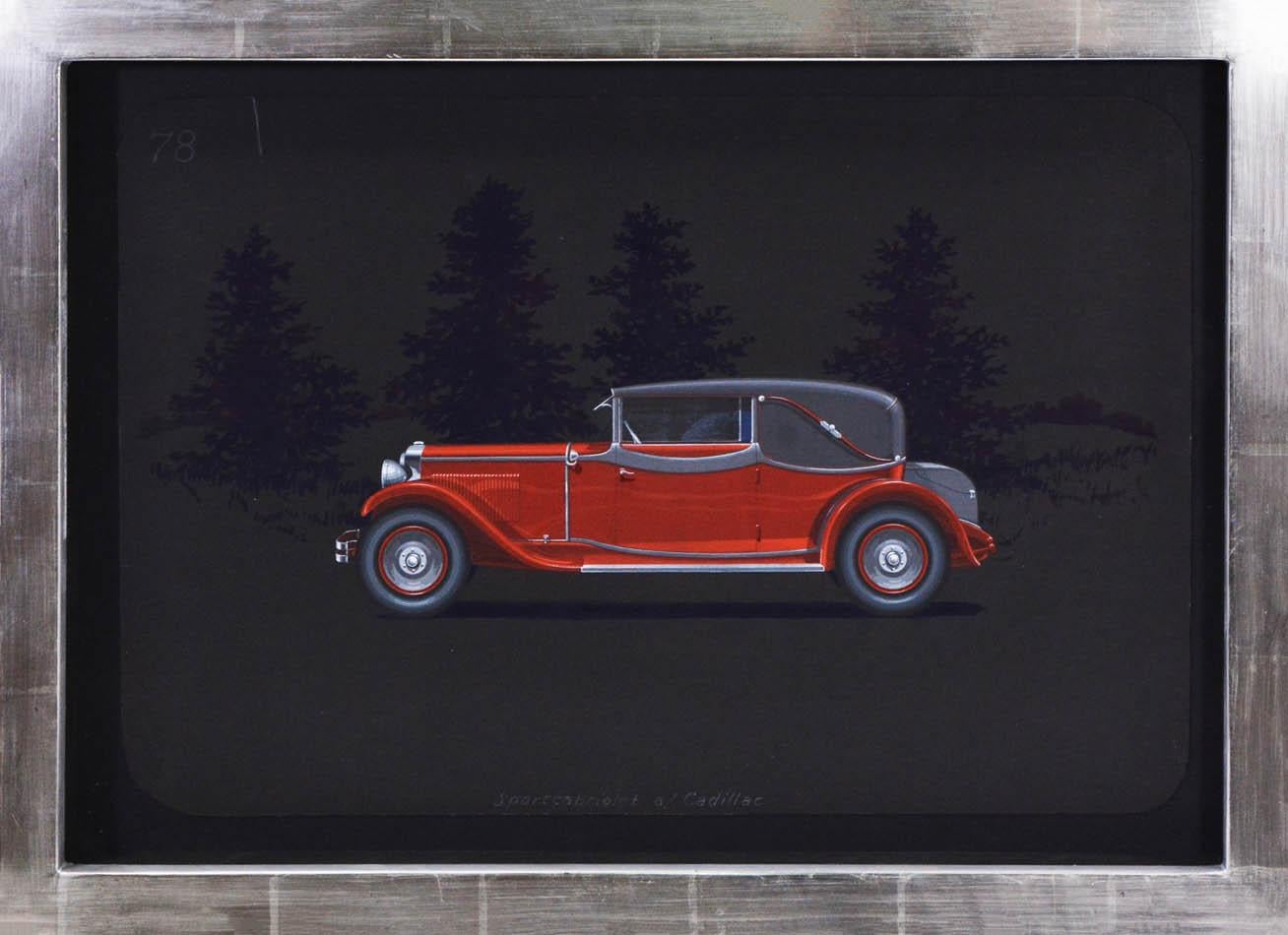 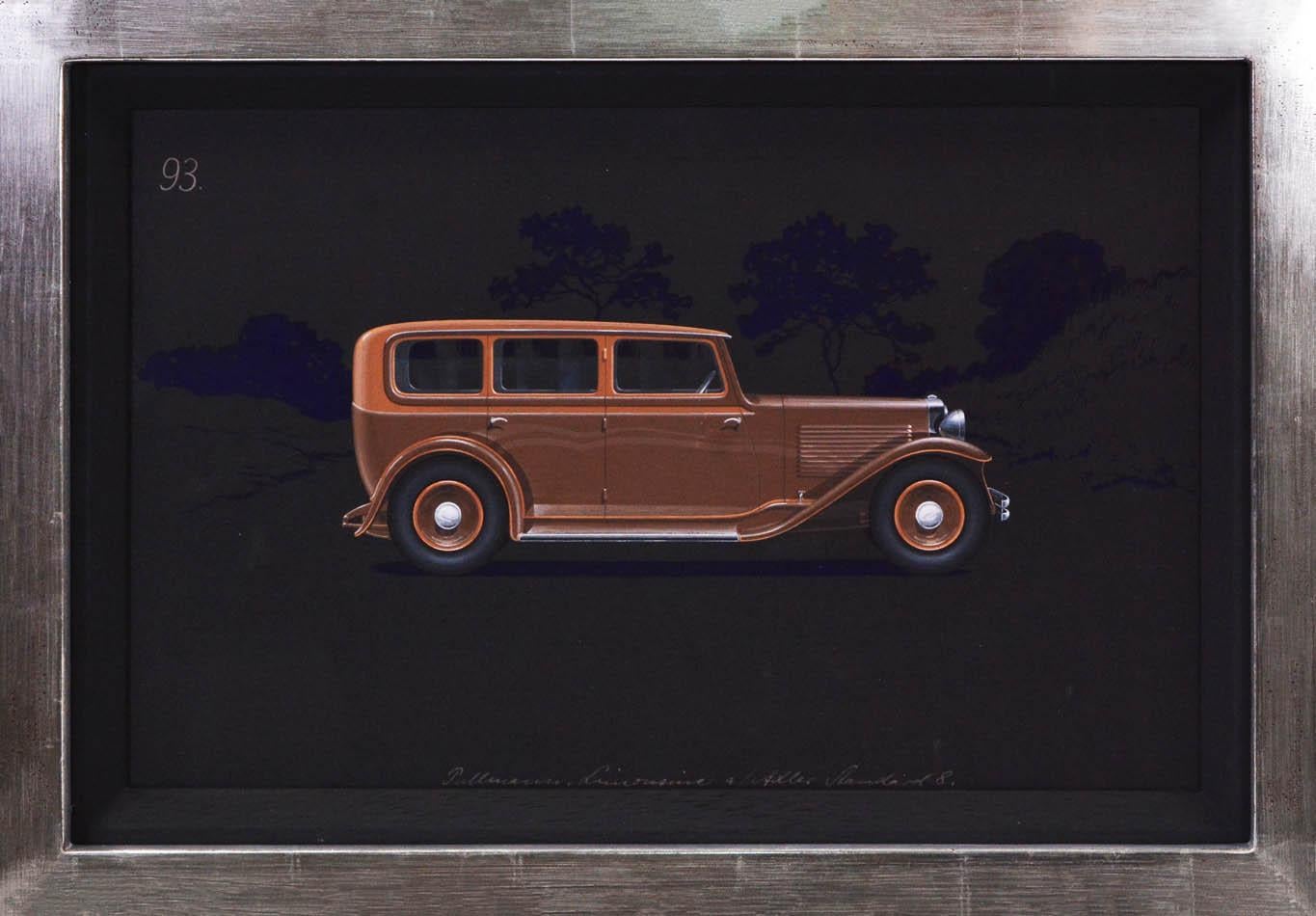 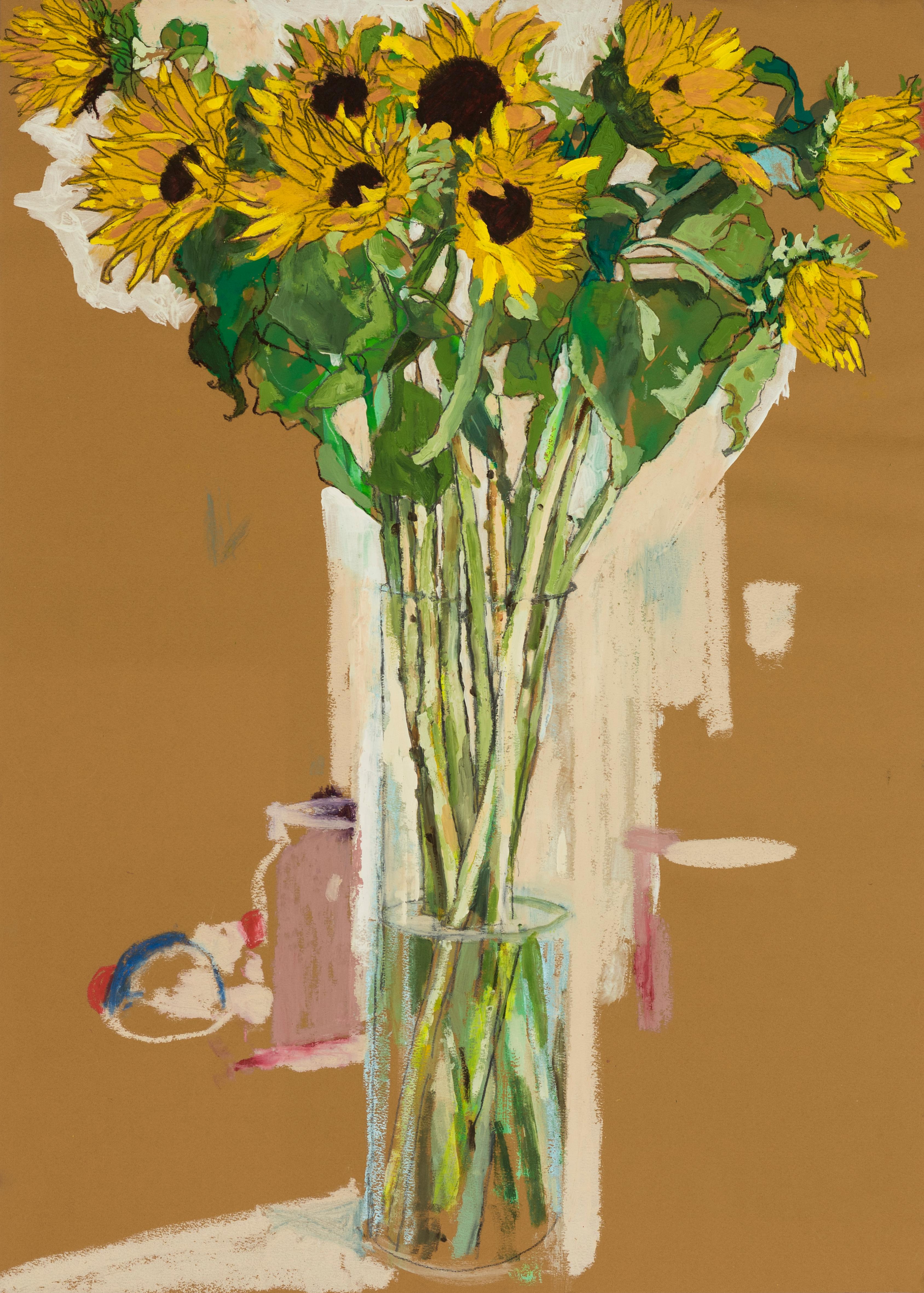 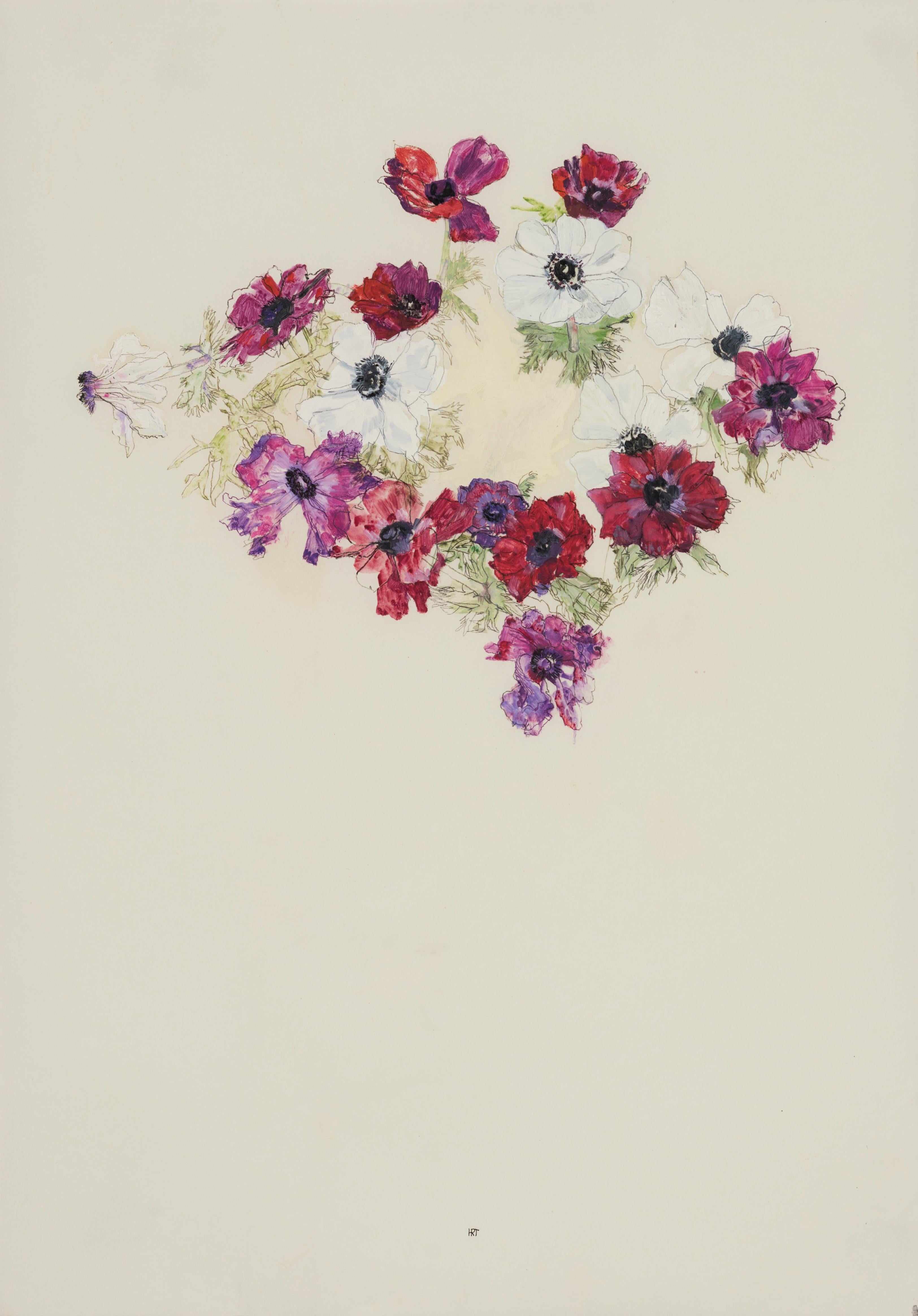 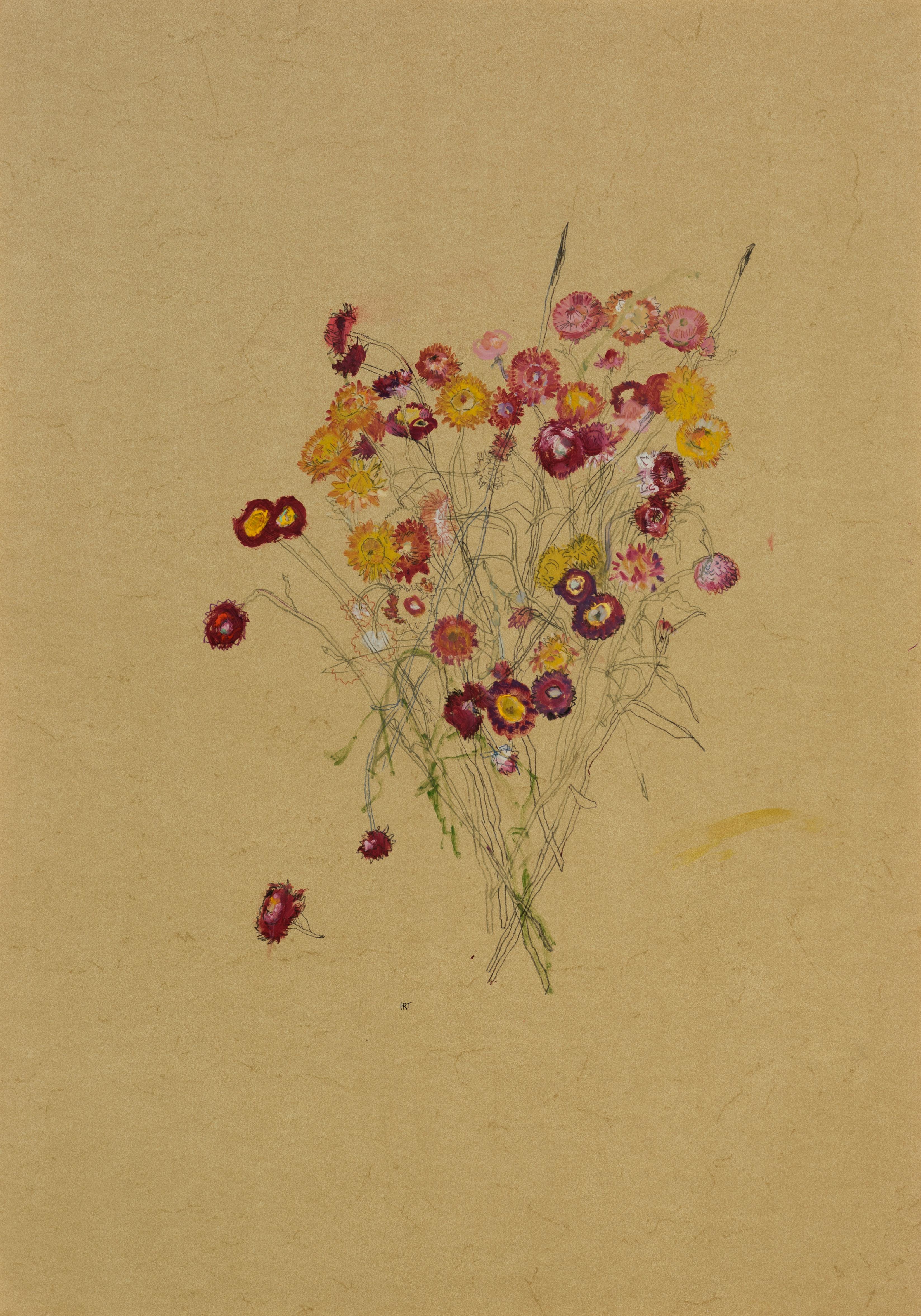 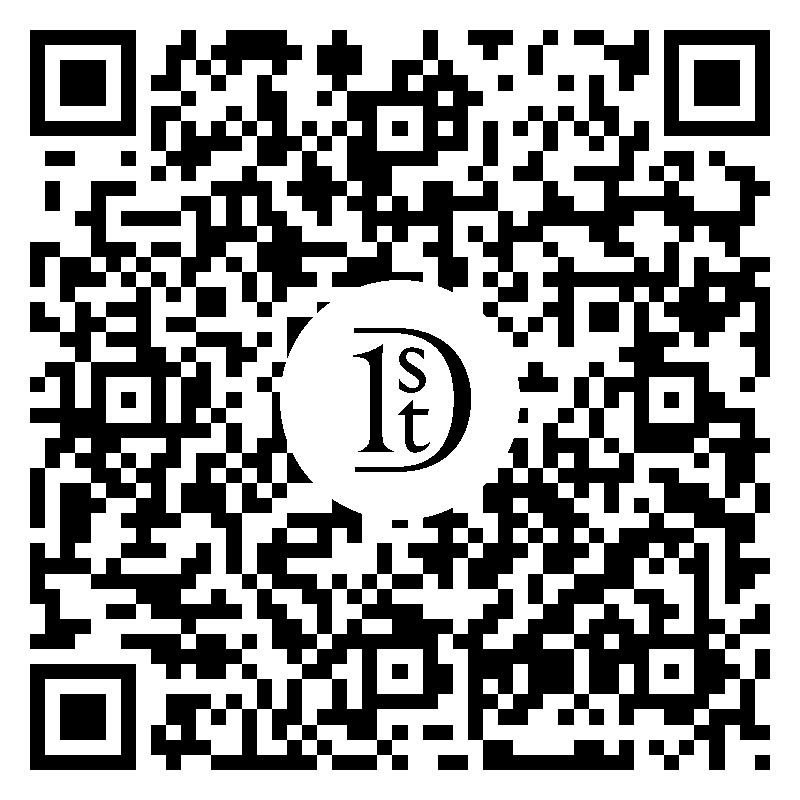 Gouache and watercolour heightened with gum-arabic on very dark green card, annotated in pale ink with body type below, numbered ‘76’, in upper left corner, German copyright label on verso. [Berlin 1930] Finished in green with contrasting light green roof and matching solid disc wheels, presented against a silhouette of a grand palace, this imposing 4-door cabriolet was one of the more luxurious variant designs around the underpinnings of the company’s straight-8 engine and drive train. It evolved from the Single Eight, so-called as it replaced the earlier V-12 known as the Double Six. Founded in 1899 by brothers James and William Packard, the eponymous company was not only one of the pioneers of North American motor manufacturing, but soon gained a global reputation for luxury and smoothness. The marque had been selling more models abroad than its competitors in the 1920s, culminating with selling twice as many as its closest rival by 1930. It is little wonder its the Packard received the attention of such creative luxury coachbuilders as Kellner. Founded by Alexis Kellner (1880-1953) in 1910, in Berlin, the eponymous Alexis Kellner AG coachbuilding company’s stylish automobile bodywork designs were immediately successful. This was demonstrated by the number of orders he received at the International Motor Show, in Berlin, in 1911. Kellner was noted for his inventiveness of small details, such as a concealed handle behind the driver’s seat for quickly and easily raising and lowering the car’s roof, concealed bonnet hinges, for aesthetic as well as aerodynamic reasons, and a suitcase mounted on the running board. The company’s success reached its zenith in the 1920s, when it was famed for the luxury bodies it designed for such prestigious manufacturers as Audi, Austro-Daimler, Bugatti, Cadillac, Horch, Maybach, Mercedes, and others. This popularity stemmed from both the highly stylish external lines and the sumptuously appointed interiors. This emphasis on sensuous indulgence was even reflected in the company’s pioneering use of nude women in its advertising. But, as with so many manufacturers dependent on wealth and stability in the market, its fortunes crashed in 1929, and Alexis Kellner was declared bankrupt in 1930. The brand name and patents were sold to arch-rival, Drauz in Heilbronn, against whom Kellner had launched a plagiarism suit in 1920 over a particular body design, who shrewdly maintained the Kellner name for its sales company. The stylishness of Kellner’s coachbuilding was perfectly captured and presented to the public by the artistry of Herbert Schultz. Unlike the flamboyant designs he portrayed so skilfully, Schultz was a modest man, despite being a creative all-rounder. In 1818, as a commercial artist and caricaturist working for the Berliner Tageblatt, he gained the admiration of fellow contributor, the artist George Grosz. Schultz had only recently come to Berlin, having graduated from the Royal Academy of Graphic Arts in Leipzig, followed by a spell at the Kunstakademie in Hamburg. Schultz’s skills as a graphic artist lent themselves perfectly to illustrating promotional catalogues to appeal to Alexis Kellner AG’s affluent clientele, which had included the royal household. Always signing his work as ‘Herschu’, he presented these imposing designs against subtle open country landscapes, glamourous night cityscapes, or floating in isolation against a solid ground. Following the demise of Alexis Kellner AG, Schultz’s ongoing artistic career was finally blocked by the Nazi state when he refused to part with his half-Jewish wife. So the Herschu name faded, as did that of Kellner, only for both to be rekindled now in these recently rediscovered, breathtaking, design. 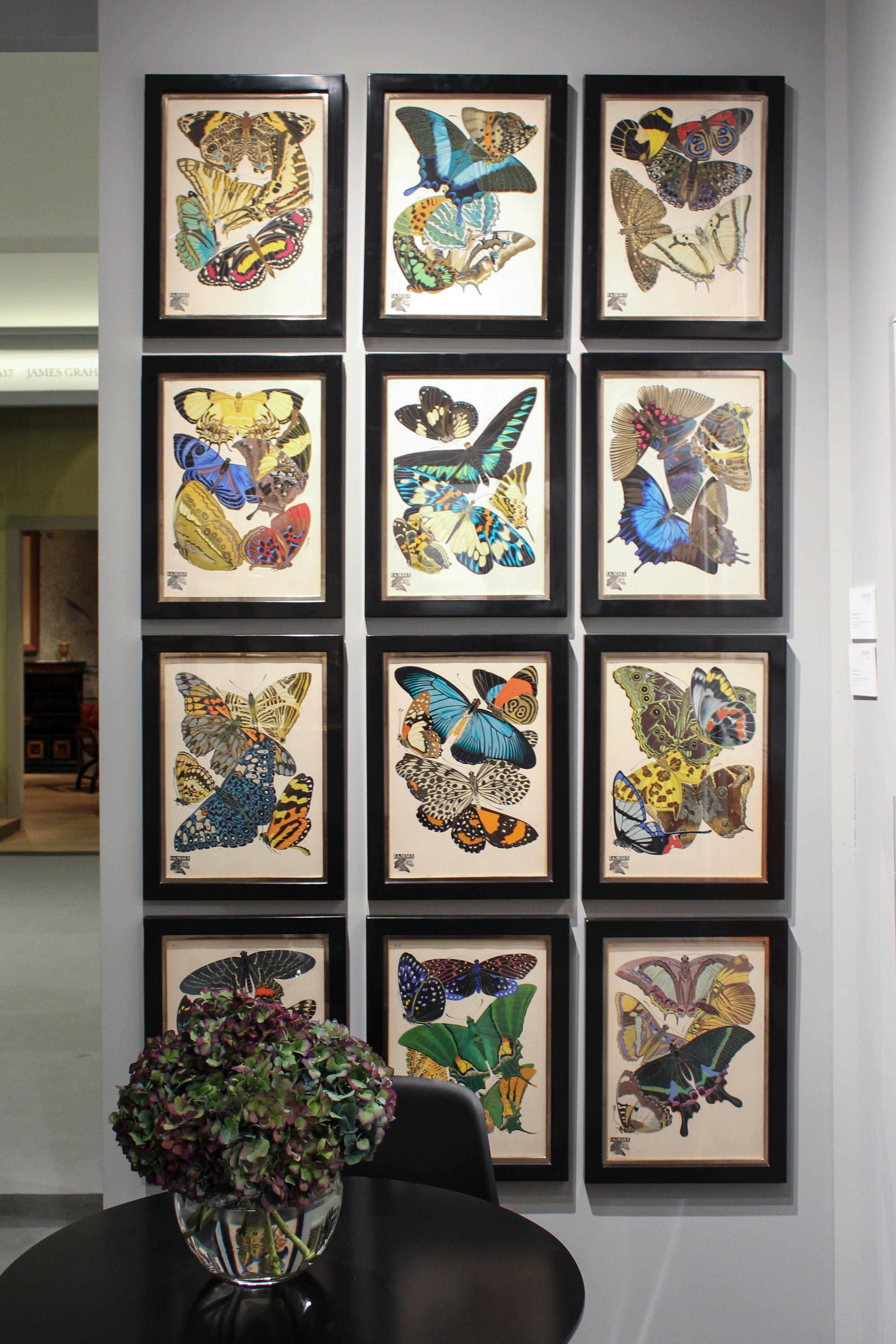 About the Seller
No Reviews Yet
Located in London, United Kingdom
Vetted Seller
These experienced sellers undergo a comprehensive evaluation by our team of in-house experts.
Established in 1979
1stDibs seller since 2020
Typical response time: 1 to 2 days
More From This Seller

Sunflowers, Mixed media on ochre paper
By Howard Tangye
Located in London, GB
Howard Tangye (b.1948, Australia) has been an influential force in fashion for decades. Lecturing at London’s Central Saint Martins for 35 years, including 16 years as head of BA Wom...
Category

$5,500
Flower Circle (Anemones), Mixed media on Pergamenata parchment
By Howard Tangye
Located in London, GB
Howard Tangye (b.1948, Australia) has been an influential force in fashion for decades. Lecturing at London’s Central Saint Martins for 35 years, including 16 years as head of BA Wom...
Category

$7,500
Flowers (Helichrysum), Mixed media on ochre parchment
By Howard Tangye
Located in London, GB
Howard Tangye (b.1948, Australia) has been an influential force in fashion for decades. Lecturing at London’s Central Saint Martins for 35 years, including 16 years as head of BA Wom...
Category

$7,250
Flower Circle (Roses, Poppies, Peonies), Mixed media on Pergamenata parchment
By Howard Tangye
Located in London, GB
Howard Tangye (b.1948, Australia) has been an influential force in fashion for decades. Lecturing at London’s Central Saint Martins for 35 years, including 16 years as head of BA Wom...
Category

$7,500
"Still Life with Irises," signed original gouache painting by Ruth Grotenrath
By Ruth Grotenrath
Located in Milwaukee, WI
"Still Live with Irises" is an original, signed gouache by the Midwestern artist Ruth Dorothy Grotenrath (American, 1912-1988). It is an exquisite example of her work in its subject ...
Category