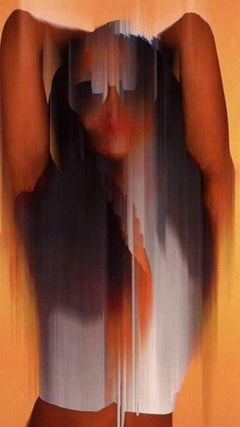 H 30.71 in. W 37.8 in.
Agent X, One Queen (4), Original Painting on Canvas, Contemporary Art
By Agent X
Located in Deddington, GB
Agent X One Queen (4) Original on Canvas Canvas Size: 106 cm x 72 cm x 1cm sold Unframed Please note that in situ images are purely an indication of how a piece may look. One Queen ...
Category

H 27.96 in. W 19.69 in.
Agent X, Butterfly 47 (Blue) , Limited Edition Giclee Print, Urban Art,
By Agent X
Located in Deddington, GB
'Butterfly 74 (Blue)' is a giclée print by Agent X. From a limited edition of 50, this print is signed and numbered by the artist. Agent X, cultural explorer and agent of the unknow...
Category

H 30.32 in. W 39.77 in. D 0.04 in.
Queen (Black) by Agent X, limited edition, affordable art, pop art, collages
By Agent X
Located in Deddington, GB
Please note that in situ images are purely an indication of how a piece may look. Queen (Black) is an Limited Edition of 20 by Agent. ’Queen (Black)’ depicts twin silhouettes of the ...
Category

H 40.56 in. W 23.63 in. D 0.2 in.
Untitled 19502345, Mixed media collage of Asian cultural theme, print by Agent X
By Agent X
Located in Maywood, NJ
The Artwork "Untitled 19502345" by Agent X explores themes of Asian Economics, Futurism and Western society. How the Asian and western cultures will drive the future. Limited editi...
Category

H 29.93 in. W 29.93 in. D 0.4 in.
Elanna - Mirror image of a woman with bun with flowers and lavender by Agent X
By Agent X
Located in Maywood, NJ
Elanna (San Fran) - Signed and numbered edition of 20, Giclee printed on 330gsm Somerset Satin white paper The Artwork "Elanna" deals with the themes of Family, Love and Nature. Age...
Category

Agent X
Elanna - Mirror image of a woman with bun with flowers and lavender by Agent X, 2018

H 15 in. W 15 in.
Agent (Large)
By G. Campbell Lyman
Located in New Orleans, LA
The list of what goes into the making of these large and complex paintings includes everything from precious small-batch oil paints to common house paint, along with tar, acrylic pai...
Category

H 14 in. W 11 in.
"Free Agent", 2008
By Isabella Ginanneschi
Located in New York, NY
Listing is for UNFRAMED print. Inquire within for framing. Edition 1 of 15. If the exhibition piece is sold or the customer orders a different print size, the photograph is p...
Category

Agent O For Sale on 1stDibs

Surely you’ll find the exact agent o you’re seeking on 1stDibs — we’ve got a vast assortment for sale. You can easily find an example made in the Pop Art style, while we also have 40 Pop Art versions to choose from as well. Making the right choice when shopping for an agent o may mean carefully reviewing examples of this item dating from different eras — you can find an early iteration of this piece from the 20th Century and a newer version made as recently as the 21st Century. Adding an agent o to a room that is mostly decorated in warm neutral tones can yield a welcome change — find a piece on 1stDibs that incorporates elements of black, brown, gray, red and more. Finding an appealing agent o — no matter the origin — is easy, but Agent X, Benoit Montet, Sophie DeFrancesca, Matthew Dennison and G. Campbell Lyman each produced popular versions that are worth a look. Artworks like these — often created in digital print, paper and pigment print — can elevate any room of your home.

How Much is a Agent O?

An agent o can differ in price owing to various characteristics — the average selling price for items in our inventory is $988, while the lowest priced sells for $150 and the highest can go for as much as $12,500.

Agent X, cultural explorer and agent of the unknown, is an emerging artist who creates experimental, multimedia collages, paintings and 2D artwork. Described as Pop Art with thought, X juxtaposes pop culture, technology, fashion and music in visually complex images expressing the anxieties of the global, post-modern world and the dark side of consumerist, media-obsessed culture. X’s work occupies a unique intersection between the aesthetics and philosophy of Futurism, the social critique of the Dada movement and contemporary artistic movements ranging from Pop Art to Super-flat. The cultural issues of racism, sexism, power, money and the urban environment are common themes found in his work. The chaotic style in X’s pieces reflect his passionate feelings of these relevant issues. Based in Vancouver, Agent X grew up in Connecticut and studied in New Haven and Atlanta. X was the top recipient at the Curious Duke Curious Pie Show and he has been a finalist in numerous prestigious art contests. X’s work has been exhibited in art meccas all around the world, including London, New York, Singapore, San Francisco, Spain, Amsterdam and Toronto.