H 7.25 in. W 8.25 in.
Runner and Flying Sage - Limited Edition Serigraph by Peter Max
By Peter Max
Located in Montreal, Quebec
Comes with the certificate of authenticity and a premium quality frame
Category 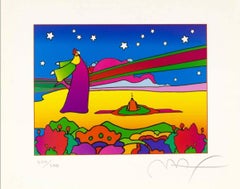 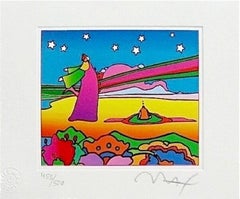 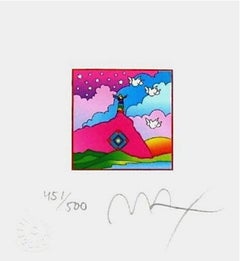 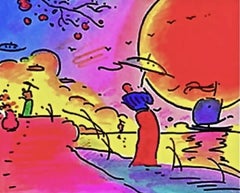 H 12 in. W 14 in.
SAGE (ABSTRACT)
By Peter Max
Located in Aventura, FL
Original painting on canvas. Hand signed on front by the artist. Stretched. Artwork is in excellent condition. Certificate of Authenticity included. All reasonable offers will be...
Category

H 30 in. W 24 in.
SAGE WITH CANE
By Peter Max
Located in Aventura, FL
Original painting on canvas. Hand signed and dated on front by the artist. Stretched. Artwork is in excellent condition. Certificate of Authenticity included. All reasonable offe...
Category

H 9 in. W 11 in.
Mid-Century Modern Unframed 2 Sages Stars Blends Peter Max Signed Mixed-Media
By Peter Max
Located in Keego Harbor, MI
For your consideration is a mixed-media with acrylic painting and color lithograph on paper from the Peter Max Studio. Hand signed in acrylic by the artist. A unique variation. Size ...
Category

H 19 in. W 15 in. D .25 in.
Mid-Century Modern Framed Print by Peter Max Running with Flying Sage Signed
By Peter Max
Located in Keego Harbor, MI
For your consideration is a beautiful, framed print of a running man by Peter Max, signed and numbered 114/165. In excellent condition. The dimensions of the frame are 35" W x 30" H ...
Category

On 1stDibs, you can find the most appropriate peter max sage for your needs in our varied inventory. Finding the perfect peter max sage may mean sifting through those created during different time periods — you can find an early version that dates to the 20th Century and a newer variation that were made as recently as the 21st Century. Adding a peter max sage to a room that is mostly decorated in warm neutral tones can yield a welcome change — find a piece on 1stDibs that incorporates elements of gray, beige, green, black and more. These artworks were handmade with extraordinary care, with artists most often working in lithograph, paint and mixed media.

How Much is a Peter Max Sage?