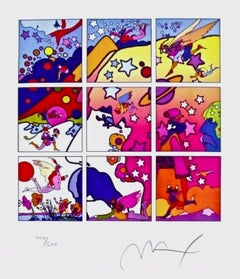 H 32.5 in. W 39.5 in.
Flower Spectrum - Limited edition Lithograph by Peter Max
By Peter Max
Located in Montreal, Quebec
-- Artwork comes with a certificate of authenticity -- Numbered and hand signed by Peter Max -- Comes with a premium quality frame
Category

H 15.43 in. W 13.5 in.
Dream I: The Blossoming, Limited Edition Lithograph, Peter Max - SIGNED
By Peter Max
Located in Mount Clemens, MI
PETER MAX (1937- ) Peter Max has achieved huge success and world-wide recognition for his artistic accomplishments as a multi-dimensional artist. From visionary Pop artist of the 19...
Category

H 12.5 in. W 9 in.
Statue of Liberty I, Limited Edition Lithograph, Peter Max - Signed
By Peter Max
Located in Mount Clemens, MI
PETER MAX (1937- ) Peter Max has achieved huge success and world-wide recognition for his artistic accomplishments as a multi-dimensional artist. From visionary Pop artist of the 19...
Category

H 30 in. W 22 in. D .1 in.
The Jockey, Pop Art lithograph by Peter Max 1981
By Peter Max
Located in Long Island City, NY
This lithograph was created by American Pop artist Peter Max. Max' work is an indispensable guide for cultural literacy of the 1960s, and it commands a large following worldwide. He ...
Category

H 30 in. W 37.5 in.
Liberty Head 2003 - Limited Edition Lithograph by Peter Max
By Peter Max
Located in Montreal, Quebec
Artwork is signed and numbered by Peter Maxcomes. Comes with a certificate of authenticity. Museum Quality.
Category

H 24 in. W 24 in. D 3 in.
Lady With Floating Flowers, Ltd Edition Lithograph, Peter Max - SIGNED
By Peter Max
Located in Mount Clemens, MI
PETER MAX (1937- ) Peter Max has achieved huge success and world-wide recognition for his artistic accomplishments as a multi-dimensional artist. From visionary Pop artist of the 19...
Category

H 5 in. W 4 in.
Liberty & Justice for All, Limited Edition Lithograph, Peter Max - SIGNED
By Peter Max
Located in Mount Clemens, MI
PETER MAX (1937- ) Peter Max has achieved huge success and world-wide recognition for his artistic accomplishments as a multi-dimensional artist. From visionary Pop artist of the 19...
Category

You are likely to find exactly the peter max lithograph you’re looking for on 1stDibs, as there is a broad range for sale. In our selection of items, you can find Pop Art examples as well as a Modern version. Making the right choice when shopping for a peter max lithograph may mean carefully reviewing examples of this item dating from different eras — you can find an early iteration of this piece from the 20th Century and a newer version made as recently as the 21st Century. When looking for the right peter max lithograph for your space, you can search on 1stDibs by color — popular works were created in bold and neutral palettes with elements of gray, beige, red and blue. Frequently made by artists working in lithograph, paint and offset print, these artworks are unique and have attracted attention over the years. A large peter max lithograph can be an attractive addition to some spaces, while smaller examples are available — approximately spanning 2 high and 2.43 wide — and may be better suited to a more modest living area.

How Much is a Peter Max Lithograph?