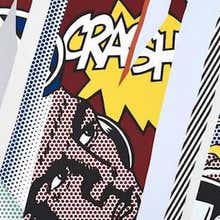 Roy Lichtenstein is one of the principal figures of the American Pop art movement, along with Andy Warhol, James Rosenquist, Claes Oldenburg and Robert Rauschenberg. Drawing inspiration from comic strips, Lichtenstein appropriated techniques commercial printing in his paintings, introducing a vernacular sensibility to the visual landscape of contemporary art. He employed visual elements such as the halftone dots that comprise a printed image, and a comic-inspired use of primary colors gave his paintings their signature “Pop” palette.

Working at the height of the Abstract Expressionist movement in the 1950s, Lichtenstein deliberately eschewed the sort of painting that was held in high esteem by the art world and chose instead to explore the visual world of print advertising and comics. This gesture of recontextualizing a lowbrow image by importing it into a fine-art context would become a trademark of Lichtenstein’s artistic style, as well as a vehicle for his critique of the concept of good taste. His 1963 painting Whaam! confronts the viewer with an impact scene from the 1962 DC Comic All American Men of War. Isolated from its larger context, this image combines the playful lettering and brightly colored illustration of the original comic with a darker message about military conflict at the height of the cold war. Crying Girl from the same year featured another of Lichtenstein’s motifs — a woman in distress, depicted with a mixture of drama and deadpan humor. His work gained a wider audience by creating a comic-inspired mural for the New York State Pavilion of the 1964 World's Fair, he went on to be represented by legendary New York gallerist Leo Castelli for 30 years.

Applied Filters1 result
Artist:Roy Lichtenstein
Item Location
1
Height
to
Width
to
1
1
1
160
715
567
516
356
1
1
The Diver
By Roy Lichtenstein
Located in Long Island City, NY
This is an important early painting by Lichtenstein. It will be included in forthcoming Catalogue Raisonne by the Lichtenstein Association. Artist: Roy Lichtenstein, American (1923...
Category 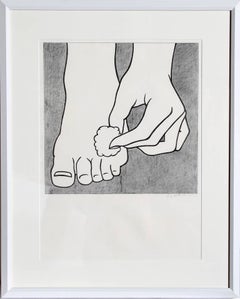 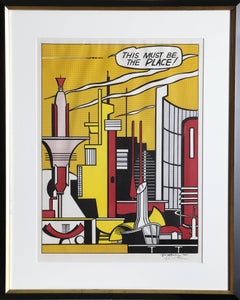