Constance Cochrane was born in Pensacola, Florida, at the United States Navy Yard in 1888. As the daughter of a Marine Corps Brigadier General, and coming from a long lineage of naval ancestry, she had adopted a love for the sea at an early age. Cochrane began painting at the age of six and after high school enrolled at the Philadelphia School of Design for Women under Elliott Daingerfield and Henry B. Snell. Always interested in helping to promote women artists, Cochrane became one of the founding members of the Philadelphia Ten in 1917 and remained a significant part of this group until its end in 1945. Cochrane resided in Darby, Pennsylvania, where she kept a studio at the family home called Bywood. She began visiting Monhegan Island in 1921 and returned every summer thereafter. Eventually, with the help of her mother, Elizabeth Lull Cochrane, Constance would buy a property and build a home and studio on Monhegan to be called Anchor Ledge. In 1926, at the age of 60, Elizabeth Lull Cochrane, seeing the apparent need for frames for her daughter’s artwork, would learn the art of frame making. Mastering this craft quickly, Elizabeth would make high-quality hand-carved frames to embellish her daughter’s paintings. Cochrane was an extremely versatile painter and was best known for her realistic renderings of crashing waves and surf as well as for her vibrant, glowing still life. She would exhibit extensively throughout her career and garner many awards. She remained a devoted advocate in the promotion of women’s involvement in the arts.

(Biography provided by Jim's of Lambertville)
Applied Filters1 result
Artist:Constance Cochrane
to
Item Location
1
Height
to
Width
to
1
1
1
10,002
2,538
2,418
1,870
1
1
1
1
"Scarlet Zinnias & Gladiolus"
By Constance Cochrane
Located in Lambertville, NJ
Jim’s of Lambertville is proud to offer this artwork. Signed lower left. Complemented by a hand carved and gilt frame. Exhibited at the "4th Annual Exhibition of the National Asso...
Category 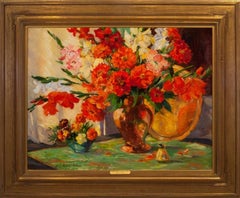 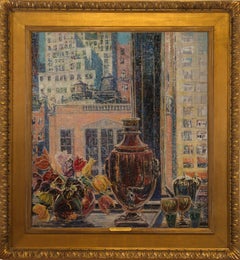 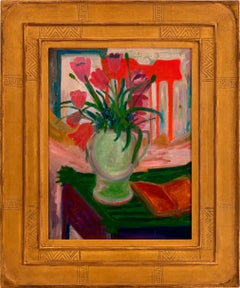